The Electric Smart is the Only Perfect Car

There is no way to defend that headline with numbers and figures. For starters, there’s the price. This car costs $30,000. Imagine being a salesperson at a Mercedes dealership trying to sell a brand new smart car. “No sir, the CLA just doesn’t fit you right, how about one of these smart cars.” And if the salesperson does convince their prospective client to take a glance over at the smart, they will be immediately greeted with the question of how far it goes on a full charge.  … 57 miles.  And this is the reason nobody bought one.

It is truly a shame that there was never the realization from Americans about how useful a car like this could be. For a country known for excess, from boats to cars to homes, you would think that having an “extra” car just for grocery store runs would be appealing. Perhaps it only appealed to me. My journey with the electric smart car started when I found this amazing pizza restaurant across a busy street from my home. I could have walked, and I did try once, but it was a good 5 minutes on foot to get there. Unbearable. So, like a civilized human, I ended up using my 500-hp supercharged Range Rover for the shuttle across the street and back. However, this felt a tad excessive, so I went in search of a better way. Fifteen minutes after hopping on craigslist I came across a 2014 silver electric smart car that had more than enough range to make the pizza runs, and I was sold!

It was in this first smart car that I found the fun and joy that these little cars have. Instant electric torque off the line meant winning every stoplight drag race, its small size meant anywhere was a parking space, and I was able to fulfill a lifelong dream. The dream of having a “DUMB” license plate on a smart car. Bliss.

For the 2017 model year, smart introduced the new Electric Drive, the 453. Disappointingly, it contained the same basic drivetrain from the previous generation, the 451. However, the top speed was increased from 81 mph to 87 mph and the body style looked chunkier and more premium. I picked up this 2018 new with crazy discounts and have never been more pleased with a purchase. 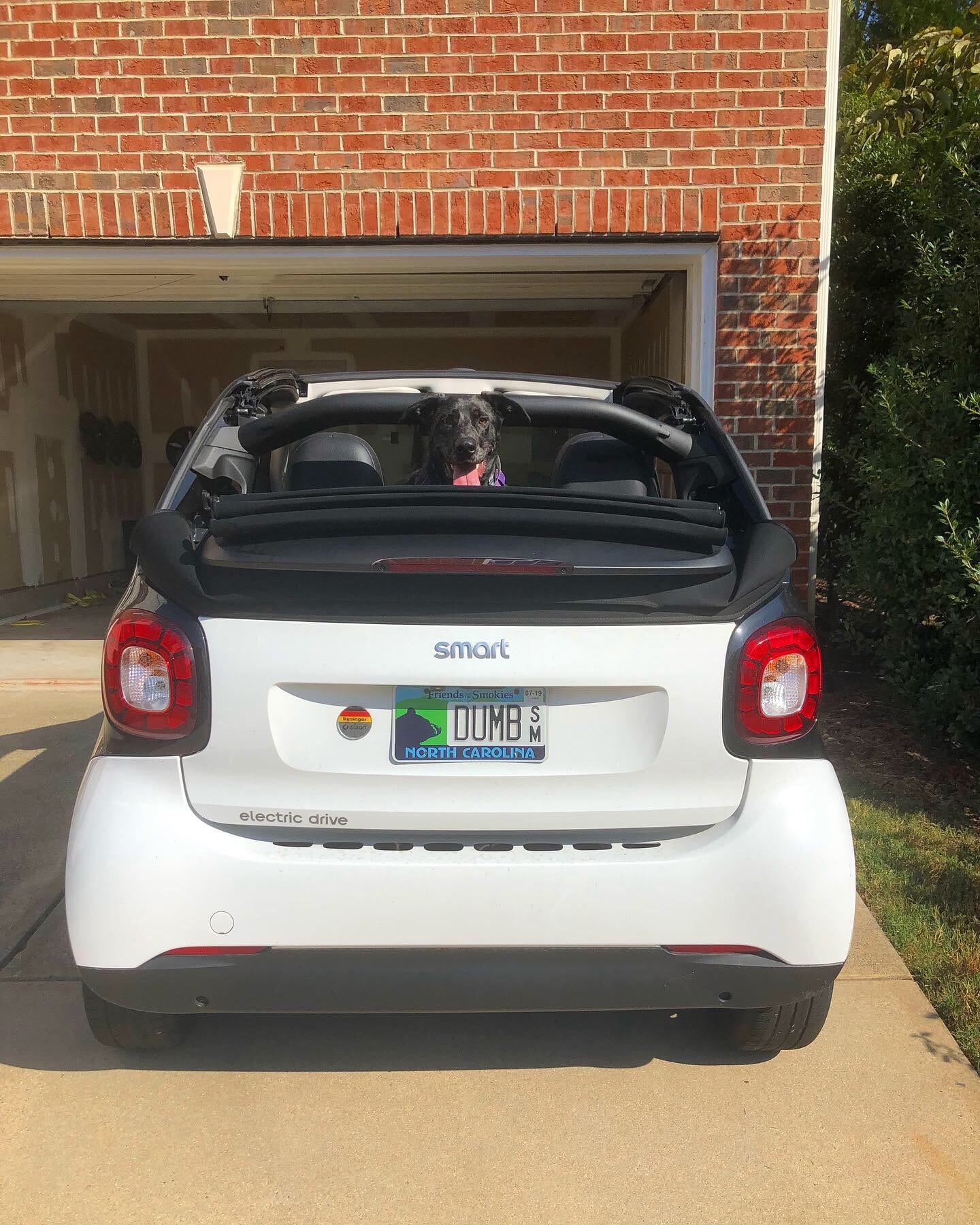 The electric smart excels in a number of different driving environments, which I will break down for you here.

Leaving home topped up with a full 57 miles of range means daily errands aren’t a problem. I peel out of the garage at wide-open throttle and never lift my foot until I reach my destination. It’s more of a dog than a car. A companion to shuttle with to the Starbucks, eager to race cars off of the light, and to occasionally squeeze onto the curb to get through traffic. 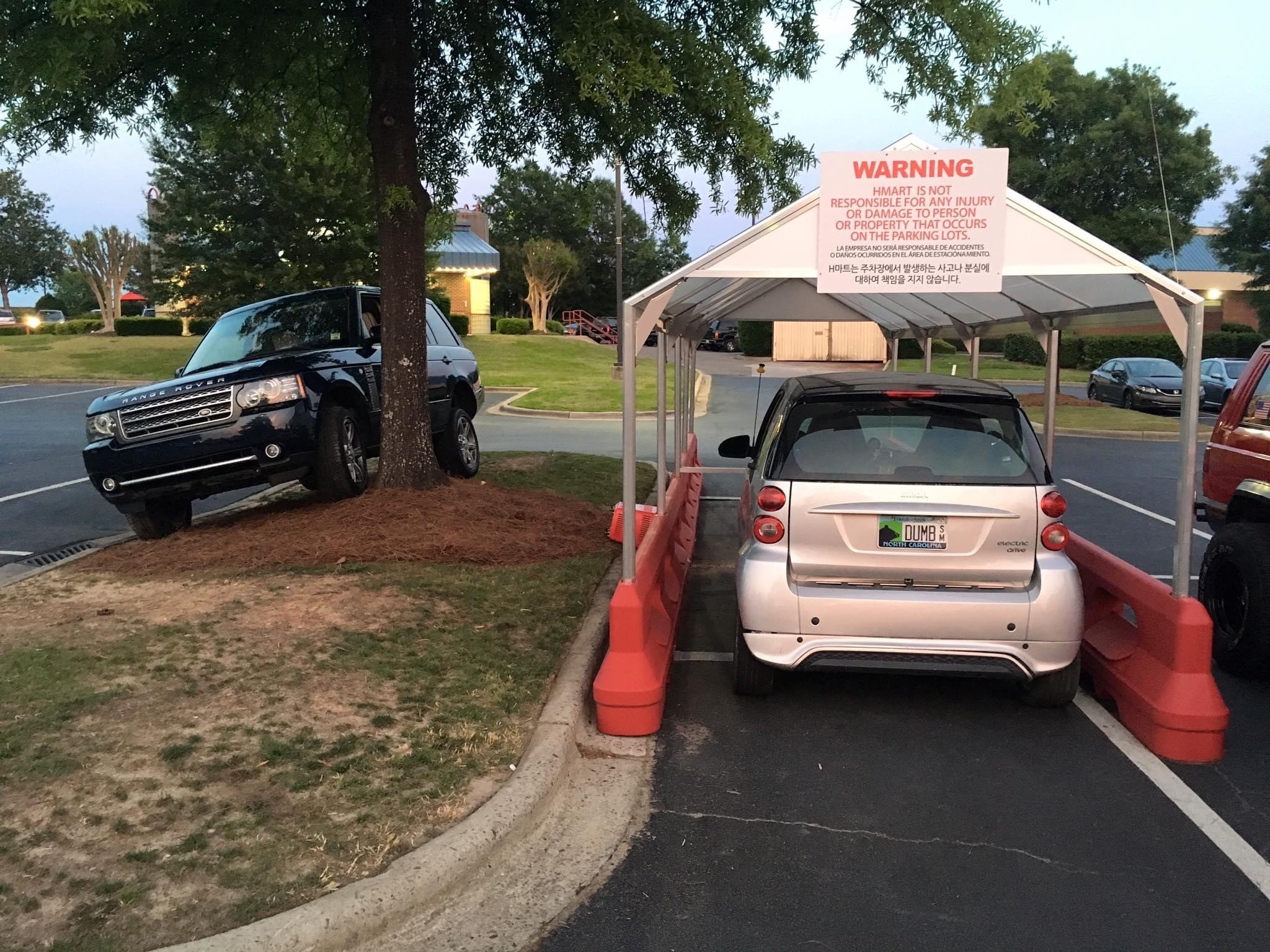 Parking this car is a delight, there is no spot too small. Because the overall length is only about a foot longer than most cars are wide, you can back into parallel spots between cars. Cargo space is more than sufficient. I routinely cruise around with my two large dogs in the back with room left over for some goods. Although there is no DC Fast charging option on these cars, the 7kW on-board charger means full top-ups in just a couple hours on a level 2 charger. Fine for dropping the dog off at the groomer, coming back home to charge up, and heading back out again.

This is where the smart truly shines. For starters, the approach and departure angles are insane. Because the wheels are pushed right to the outer edges of the car, I can easily climb any mountain or ford every stream without tearing the bumpers off. Once I climb up onto an obstacle, the rear end is close by, meaning the breakover angles the smart can handle are extreme, to say the least.

Encountering mud requires hard acceleration with a full-speed approach. Since there is no combustion engine, the smart doesn’t seem to mind being submerged for short periods of time. Another benefit is that the motor is on the rear axle pressing the drive tires into the surface, a bit like a 911. Traction in all scenarios.

Fun fact, I once got completely stuck down to the chassis in thick North Carolina wet clay driving a Land Rover. I called my friend for backup support and asked them to fetch the smart and a tow strap. What happened next was something Chuck Norris would be jealous of. True story.

I can’t imagine many people taking their smart cars to track days, but they should! I’m in the lucky position where my office is a race track, therefore I’m tearing it up every day in the smartie. Being rear-wheel drive with a low center of mass means big fun. Rocketing down the front straight I can achieve the maximum speed of 87mph quite easily, but that’s not the fun part.

I have modified my smart with an ESP override switch and a square tire stance. The original staggered setup meant too much understeer for my liking. With this new setup, all I have to do is flick it into a corner, nail the throttle, and I’m full sideways with a grin on my face. It is tough to control on the limit with that short wheelbase and rear motor, so quick precise steering adjustments and accurate pedal control are rewarded. The on-limit handling dynamics are similar to older 911s, with that weight hanging out over the rear axle, just with much less crumple zone if things go wrong.

The smart is usable for almost all tasks of everyday life. It spoils you with being perfect for every task, never less, but never more. It’s a nice place to be, makes people smile, and lets you drive as fast as you want without ever drawing attention to yourself. It’s a shame they stopped selling them here in the U.S. because I would urge you to go get one, especially when those lease deals were less than a cell phone bill. However, there are great deals to be had in the secondary market.

About the Author: Kyle Conner