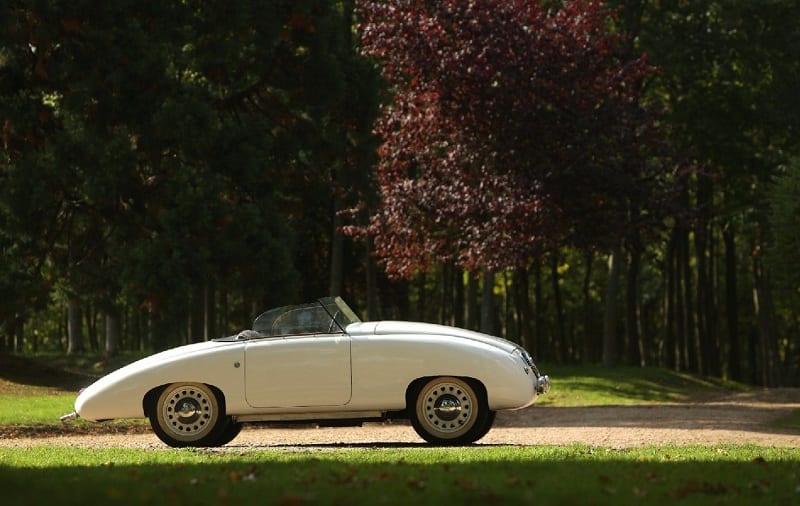 The French are an odd sort, and I mean that in the absolute best way possible. Georges Irat seems like one of the best kinds of odd Frenchmen, in that he created this thing. This car is actually a prototype of a production car that never actually materialized, but as a one-of-one, it is one of the most *unique* unique automobiles I’ve ever seen. The Retromobile show is known for showing off some unique cars, but this “Georges Irat cabriolet par Labourdette” is amazing, special, cutesy, and sporty all wrapped up into one package. This car will be crossing the auction block next week at the Artcurial auction in Paris, which runs concurrently with the Retromobile show. The limited knowledge of the internet as it pertains to this car can be found after the jump. 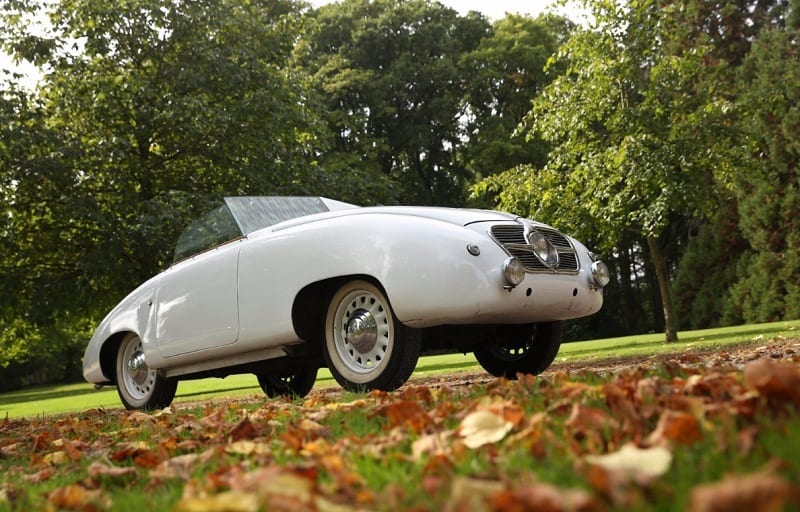 Look at that! Well would you just look at it! Were I in a position to bid on any car at the Paris auctions (RM Auctions and Bonhams will also be selling amazing collector cars there), this might be the one I bid on, and not just because it’s among the less expensive ones. This car has an interesting, albeit short, history. Georges Irat started making cars before the war, and during the war he became a proponent of electric propulsion for automobiles. His lightweight electric cars launched in the early 1940s were capable of about 30 miles per hour and had a range of about 60 miles on old-school lead-acid battery technology. That’s pretty damn amazing if you ask me. Sadly in 1942 the production of the car ended because the materials were simply not available to produce the cars any longer. After peace returned to Paris in the mid 40s, oil was again available in quantity, so electric cars were no longer en vogue, so Irat returned to his petrol-burning pre-war ways. In 1946, Irat produced this voitturette for display at the Paris Auto Salon. When it was first displayed, the cabriolet featured an 1100cc flat-four engine (possibly Royal Ruby Motorcycles derived) powering the front wheels (shown below in 1946 spec). The car was then reworked for the 1947 Paris Auto Salon with slightly different front end treatment, including different wheels, removing the chrome bumper, and installing a fixed glass cover over the center-mounted headlamp (As shown currently). For 1947, the car was converted to a more conventional 2.0 liter inline 4 engine and traditional rear driven wheels. The car was headed for production, but the government actually had a part in stopping that from happening. At the time, the French government was still in control of rationing out the materials needed for production of automobiles. The 1100cc car had already been voted down by those in charge of such things. By installing the 2-liter engine and increasing the car’s performance potential, Irat was hoping to earn a label for his car as “exceptional” and labeled his car production for export to foreign markets, which the French government gave preferential treatment to. Again, the government voted Irat down, and he did not receive the necessary shipments to begin production. Efforts continued through 1949, where this car made another appearance at the Paris Auto Salon, but eventually the idea of a production run, even a limited one, was tossed in the trash. 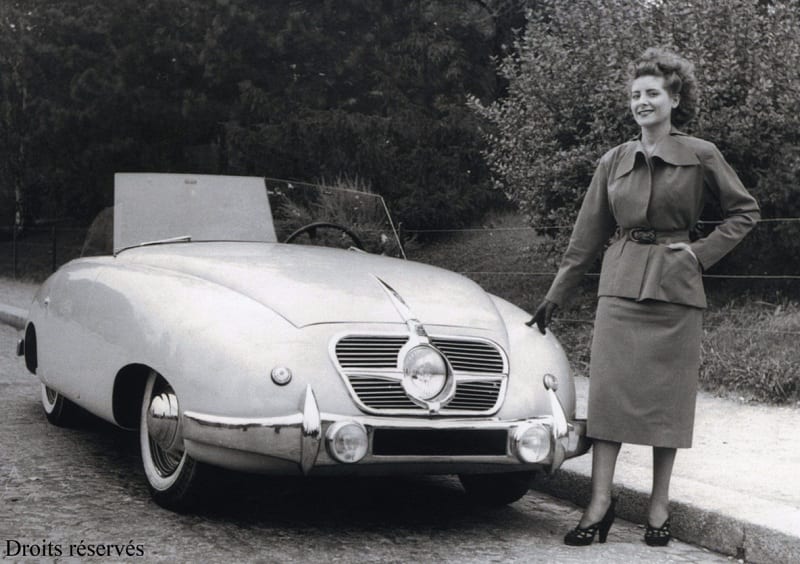 The car’s spartan interior, frameless windows, and teardrop shape lend it an air of sportiness that really appeals to me. Based on the other designs that were on the road in the mid 1940s, I’d venture that this car was definitely a strange sight on the streets of those days. It doesn’t look like anything else that ever was, or ever will be. With a top-speed of nearly 100 miles per hour, and a lightweight body conducive for quick driving, I’ll bet this little two-seater is a riot to drive. I’d love the opportunity, you know, to whoever ends up buying the thing. 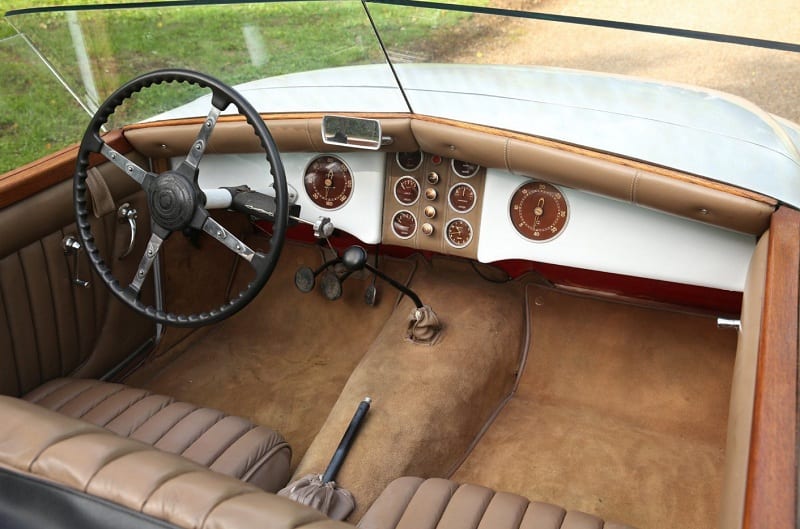 This one-of-one auto will be auctioned on the 5th of February during Artcurial’s annual Paris sale in Rétromobile Hall 2.1. The sale begins at 3PM local time, and this car is lot number 184. The auctioneer is Mr. Hervé Poulain. Obviously I’m not in a position to do any bidding here, but if I were looking for a truly one-of-one car, I’d absolutely be adding this one to my collection.

Lot 184 – 1949 Georges Irat cabriolet par Labourdette No reserve French title – A unique model – A show car – A Concours d’Elegance candidate – No reserve In 1910, as a director of the automotive division of the service Compagnie générale d’électricité that Georges Irat, then just twenty years old, took his first steps in the world of the automobile. After several failed attempts, this French manufacturer finally saw success at the Paris Salon of 1935, with the unveiling of a small roadster and a convertible with front wheel drive, and powered by a Ruby engine, with total production not exceeding 400 units. Postwar, Georges Irat abandoned the car production, and instead specialized in making industrial motors, marketed under the brand name of DOG. These were manufactured in the suburb of Begles, near Bordeaux. Alongside this activity, Georges Irat started work on the design of a new car, which he unveiled at the Paris Salon of 1946, a revolutionary prototype mounted on a magnesium frame. He returned the following year with a further development of this first prototype. Finally, in 1949, a final prototype was readied. This is the one we offer at auction, a car which has been seen in numerous exhibitions. It is powered by an engine of 2-liter mated to a Cotal box. With a top speed estimated at 150 Km/h, it is equipped with hydraulic brakes. At the time, success was not to be, and this prototype marked the end of the automotive adventure of George Irat. Only the body of this car, made by the famous coachbuilder Labourdette, was found at the plant in Bègles. To be shown in various events, a Simca Eight chassis was used to underpin the car. Another feature of this prototype, the use of the process Vutotal for the windshield, without any frames, was designed by engineer Joseph Vigroux, at Labourdette. This is a prototype that demonstrates the rich history of the French automobile and its many small carmakers, one of which was the ambitious Georges Irat.

Other interesting bits to note, this is the brochure that was used to advertise the cabriolet in 1946. 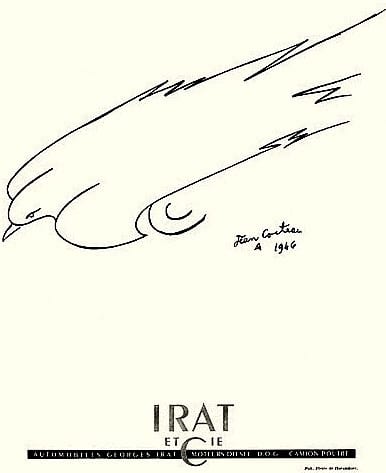 And this is the project that Irat tackled after the cabriolet failed to work out. This is described as a 3-seat JEEP-like vehicle built in Moroco, called a Voiture du Bled or “VDB”. I kinda really dig it.