The Compass is a Step in the Right Direction for Jeep

Jeep’s latest Compass has finally found the right bearings it needs to compete in the ever-popular crossover segment. Slotted between the smaller Renegade and more off-road oriented Cherokee, the Compass recently saw a full, complete redesign in 2017, that now makes it worth more than a shrug.

It’s not a surprise, but when the Compass launched in 2006 it wasn’t anything at all to brag about. A lethargic, lifeless powertrain matched by droopy styling and an atrocious interior; it was almost a slap in the face to gritty Wrangler owners that it was badged as a Jeep. All of that didn’t stop shoppers wanting to open their wallets wide for an entry-level Jeep. 18,579 sold in its first year then doubled to more than 39,491 in 2007. The Compass saw a couple slight refreshes up until 2017 when it departed from the heavily utilized GS platform, co-developed between DaimlerChrysler and Mitsubishi, which gave birth to familiar nameplates like Patriot, Journey, Sebring, Journey, and Lancer.

Finally a second generation Compass built alongside the popular Renegade in Toluca, Mexico arrived in 2017 bringing appreciated styling that mirrors its bigger brother the Grand Cherokee, a slew of modernized powertrains, plus an impressive list of new  features and technology that pose it right alongside other crossovers dominating the market from Toyota, Honda, and Nissan. So far the redesign has been a success story for Jeep with some 158,422 Compasses sold through November of 2018.

Since this is no doubt an important model for FCA, I wanted to score some seat time in the new Compass and the folks at Jeep tossed me a set keys to one along with a tank of gas. I tested it for a week in commuting duties, daily runabouts, and on a late-fall camping escape to a spectacular state park called Kohler-Andrae, home to some of the last remaining sand dunes in Wisconsin.

Needless to say, I can see why the Compass continues to bring more people into the Jeep family. The Compass Latitude I had on loan ($24,395 MSRP) was the right balance of what I’d want in a crossover. It doesn’t look as angular, dorky, pointy, or littered with lines like its rivals, rather it wears the image of an actual small SUV quite well and not something I’d be embarrassed to be seen in. So much of the styling shadows what’s seen on the Cherokee, which isn’t a bad thing, and while it’s more of an urban dweller than say a hardcore Moab runner, the Compass doesn’t come off as a compact pavement-bound softie doomed only for the parking lots of strip malls.

The standard 2.4-liter four-cylinder hums a respectable 180 horsepower delivered via a nine-speed automatic that hunts for gears when passing on the interstate or in bumper-to-bumper traffic. Could the Compass use more power? Yes, sure, but it doesn’t need it. Available in five affordable trim levels with either front- or four-wheel-drive (masked as more of a traditional all-wheel-drive system), you can actually equip the Compass to be had with both a six-speed-manual and 4×4, a rare combination and treat these days that’s not found on its competitors’ build sheets.

Impressions behind the wheel were relaxed. That’s the best word to describe it. It’s not exhilarating to drive but not exhausting, just comfortable and that’s exactly what I’d want and expect from a crossover. The Compass’ steering was light and responsive, making it effortless to maneuver in tight parking lots and parallel park on a city street. My nightly commutes in choked traffic were comfortable and pleasantly quiet. Wisconsin didn’t deliver any snow during my week of testing but should you need to scramble through it, the Selec-Terrain Management system gifts you a dial near the gearshifter to tailor the Compass’s 4×4 to various drive modes like sand, rock, and mud. There’s even a locking center differential and the spirited Trailhawk model comes with 4WD low.

Years back I remember peering my head into a Compass on the floor at the Milwaukee Auto Show and almost regretting it after laying eyes on the swabs of hard, cheap, and ill-placed bits of plastic throughout its boring interior. That’s thankfully completely changed with this new Compass. The cabin’s now an attractive and comfortable space filled with quality materials, hints of leather stitching, and swaths of piano-black and chrome accents. This is a crossover you won’t be ashamed to take passengers for a ride in and even 6’2 riders like myself, will have plenty of room to spread out.

FCA’s Uconnect multimedia system is found here too by way of an 8.4-inch touchscreen (a 5-in comes standard), and like all implementations of it is flawless. I have yet to understand why other manufacturers aren’t following suit when it comes to designing multimedia systems of their own. I’ve used Uconnect for what feels like ages now and I’ve had zero complaints or issues. The user interface is perfect and not distracting. Additional infotainment goodies like Apple CarPlay and Android Auto connected seamlessly, and I was able to cue up the navigation screen and enter the address for my state park destination quickly. There’s even a weather app that shows real-time weather updates and maps with radar, a fantastic thing to have handy when heading to the campsite or trailhead. 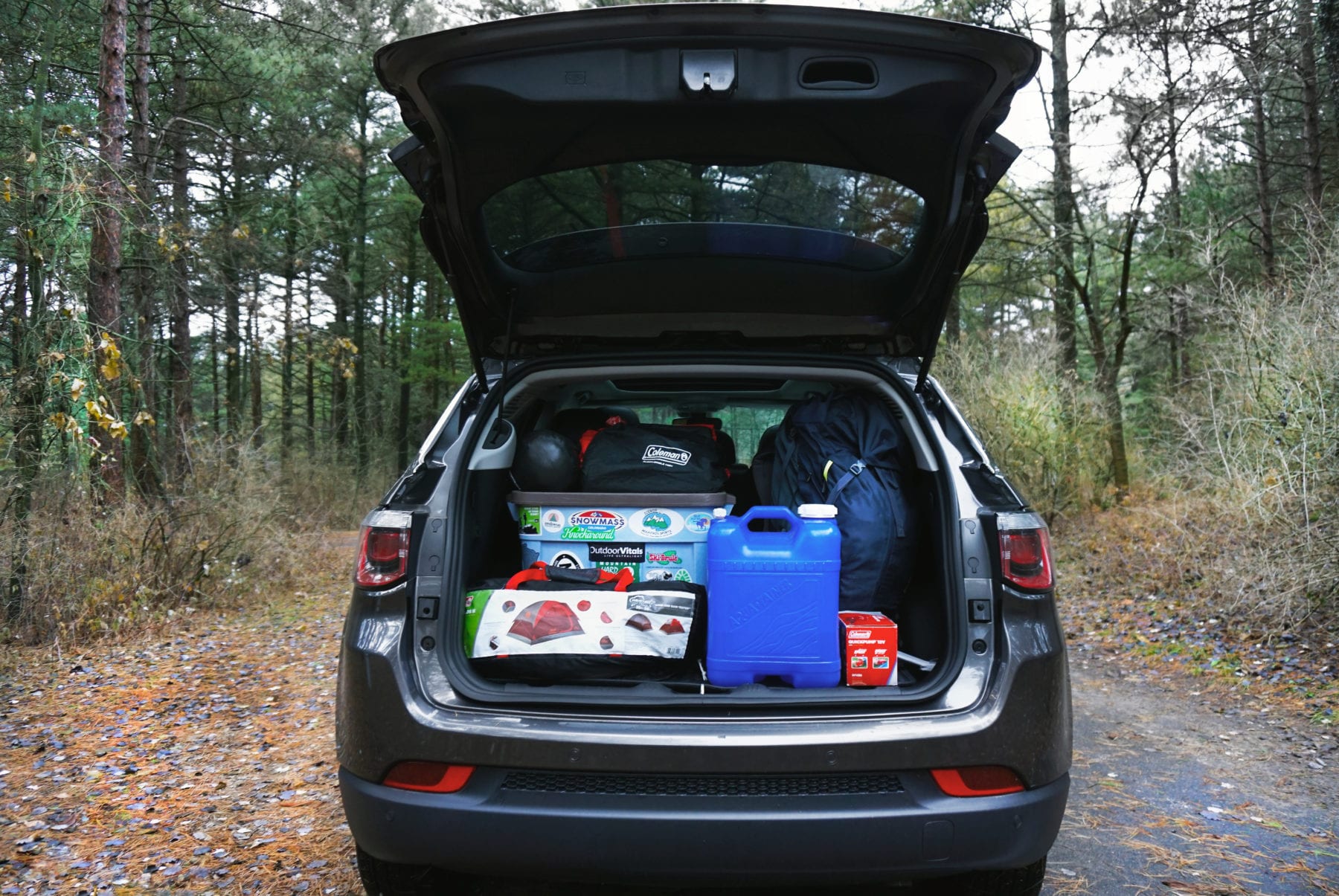 Sticker shock: there were a little over $10,000 worth of options on my Compass Latitude but a few were excellent must-haves like its giant panoramic sunroof, rubber floormats, a heated steering wheel, several advanced active safety systems like lane keeping assist, and of course the mentioned larger touch-screen. But truthfully the Latitude’s $24,395 base price includes plenty to be content with like a backup camera, cloth and faux-leahter seats, a leather-wrapped steering wheel, a flat-folding passenger seat, keyless entry and push-button start, Bluetooth connectivity for phone calls and music, and a smaller screen for Uconnect. The list goes on, and it’s a list you should definitely look at if you’re in the market for a crossover.

Nicely done, Jeep. This is a huge improvement and serious step into the crossover game. The new Compass proved to be both a solid companion for weekend car camping and an all-around go-getter. I’d have zero regrets throwing it into the recommendation ring against the Rogue, RAV4, CR-V, and Ford’s Escape.