The big news from Chevy for 2019 is not the mid-engine Corvette. It’s the Silverado. Like other pickup trucks, the Silverado comes in a large variety of cab, bed, driveline, and trim configurations. But the one thing that stands out in the new line-up is the availability of a four-cylinder turbocharged engine.

When Ford introduced its EcoBoost engines in the F-150, the pickup faithful clung to their V8-powered rigs and cited Charlton Heston and his “cold dead hands”. In time, however, people have warmed up to the smaller turbocharged powerplants. But a four-cylinder in a full-size? Is this some kind of a sick joke? 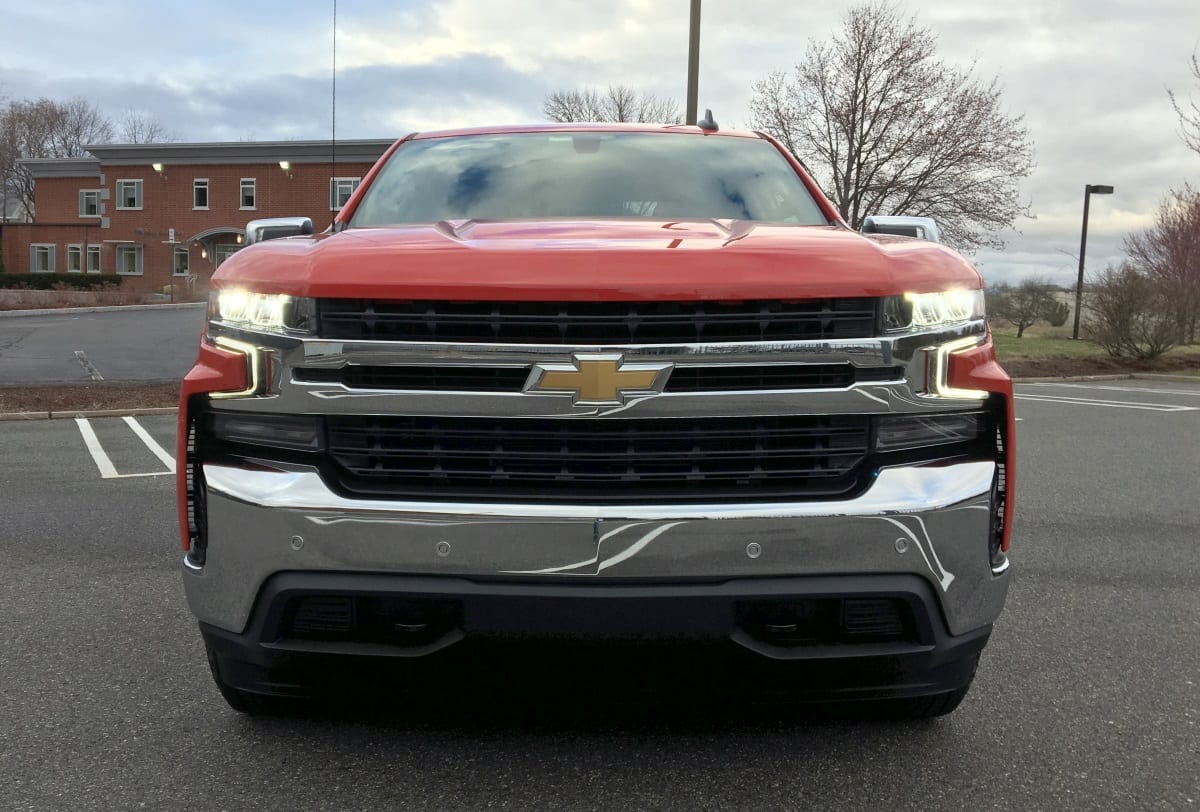 Nope. And you shouldn’t consider it as such, either. The 2.7-liter in-line four makes 310 horsepower at 5,600 RPM and 348 lb-ft of torque at a low 1,500 RPM. Power is sent to either the rear or both axles via an eight-speed automatic transmission. The truck is quick off the line and at that point no one would really know what was hiding under the hood. If it wasn’t for the cute whistling noises flowing out from under the hood, that is.

This Silverado cruises smoothly on the highway, but hard highway acceleration is not its forte. To accelerate at highway passing speeds, the transmission must kick down a gear or three, boost must build up, and then it finally goes. All of that in turn makes for slow throttle response. In fairness, Ford’s EcoBoost and its ten-speed transmission do similar things yet those are currently a bit more refined.

The second letdown of the four-banger comes at a place where it should excel – the pump. In its press material, Chevy says “the 2.7L engine offers 14% more torque and 13% better city fuel economy and it is more than a full second quicker 0-60 mph than the 4.3L V-6 it replaces.” Maybe so, but what isn’t mentioned is that a similarly configured model with the 5.3-liter V8 gets better highway gas mileage at 22 MPG versus 21 MPG for the four-banger. At 18 MPG in the city, the four bests both the V6 and V8 models by two MPG. 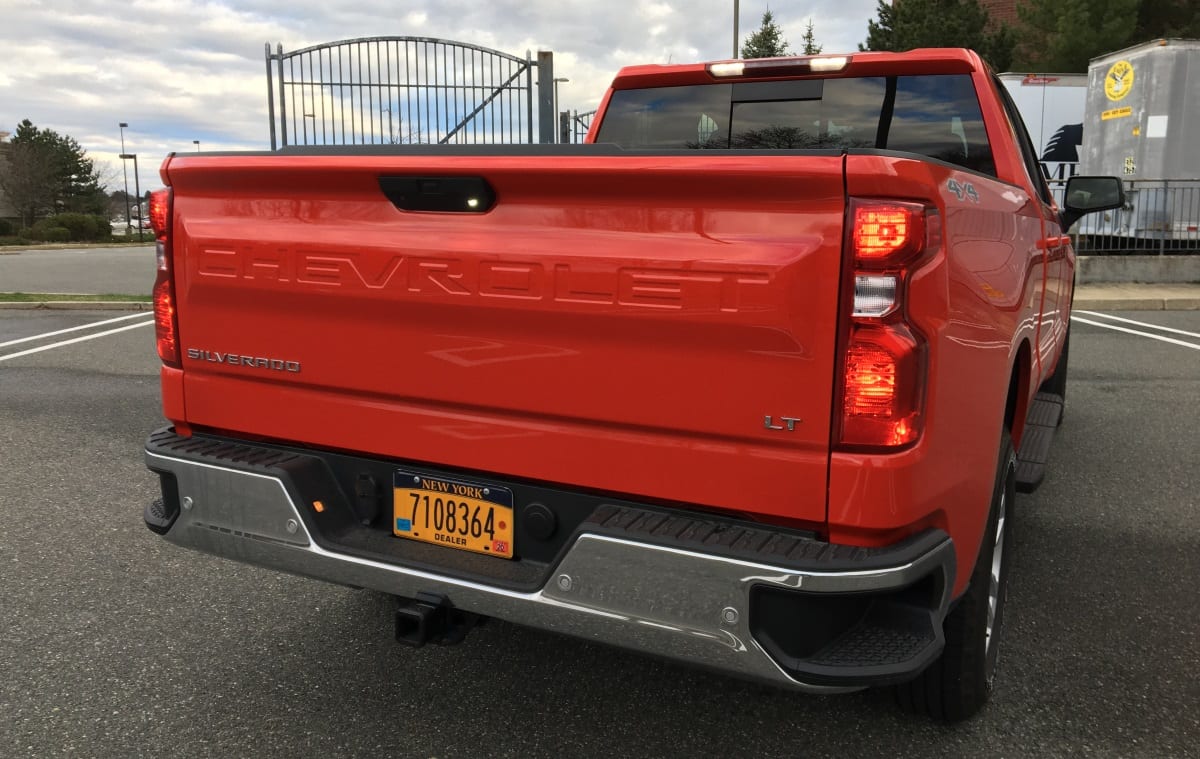 Lastly, and rather not surprisingly, this 4×4 double cab model is rated to tow 6,700 pounds. That is not a lot for a full-size pickup. But if towing is your thing, skip the four-banger and opt for one of the other Silverado models, which are capable of towing as much as 12,100 pounds.

Having spent significant time going through Chevrolet’s provided data, the payload of the turbo-four equipped model does not seem to differ from the other models, at about 2200 pounds, give or take a few pounds based on the configuration.

In my four days with this truck, I unfortunately was unable to attach a trailer or load up the bed with anything more than a doorbell camera. I therefore do not know how this engine responds to additional weight. Another issue was a random check engine light – it would come and go. I felt like it had something to do with the transmission, as the shifts seemed jerky when it was illuminated.

With the all-new truck, one would expect an all-new interior. And the interior is all new but to see all this new I had to search for a picture of the previous generation truck and do a comparison. The two are very similar in terms of layout, features, and the unmistakable General Motors feel of it. Other than a few minor ergonomic shortcomings in this console-less three-passenger front bench seat model, there is really not much to complain about. It’s when one drives the Ford F-150 or the new RAM 1500, does the Chevy interior seem inferior in terms of its layout and the materials used. The Bose audio system is pretty good.

The exterior design is more aggressive than modern. It’s an angry truck and many men will like it for that very reason. Where once trucks were designed with purpose, this rig was designed with that aggresive style in mind. The double cab model has front-hinged rear doors, which is a better solution than Ford’s suicide rear doors. There also seems to be more space in the rear seat area. But as with other truck makers, if moving people around in the back seat is the goal, go for the crew cab. 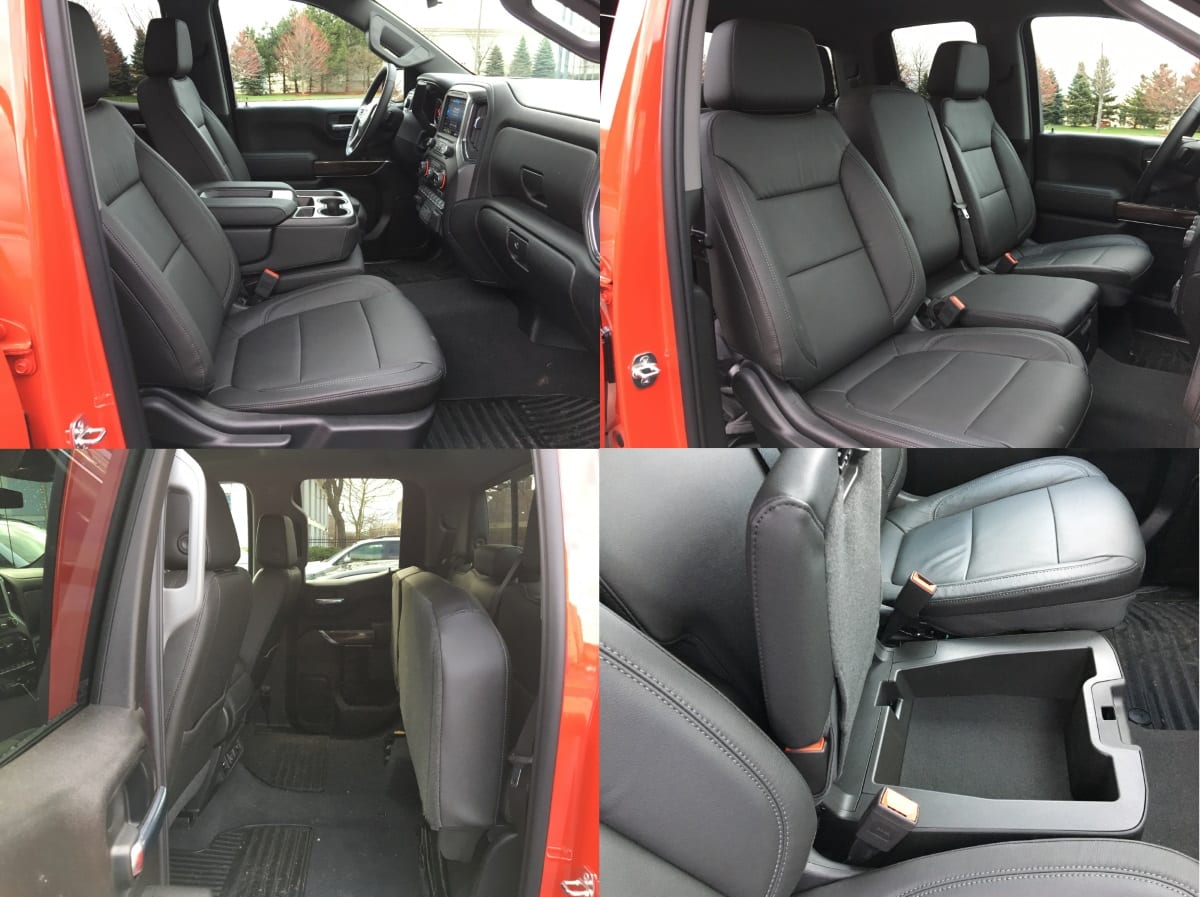 The bed of this truck was sprayed with a black liner. In the bed are 12 handy tie-down points, bright LED bed lights, and a 120v household receptacle. On the locking tailgate is a light that cleanly illuminates the hitch area. The tailgate itself does not have a handle but rather a push-button switch to open it.

One thing that really made me scratch my head was the price of this truck. This was a fully-loaded LT model. In Chevy’s hierarchy of models, the LT falls mid-pack at best. And yet this truck had an MSRP of $48,590. Dealers set final prices and actual sale prices will probably be much lower but that’s still a lot of money. 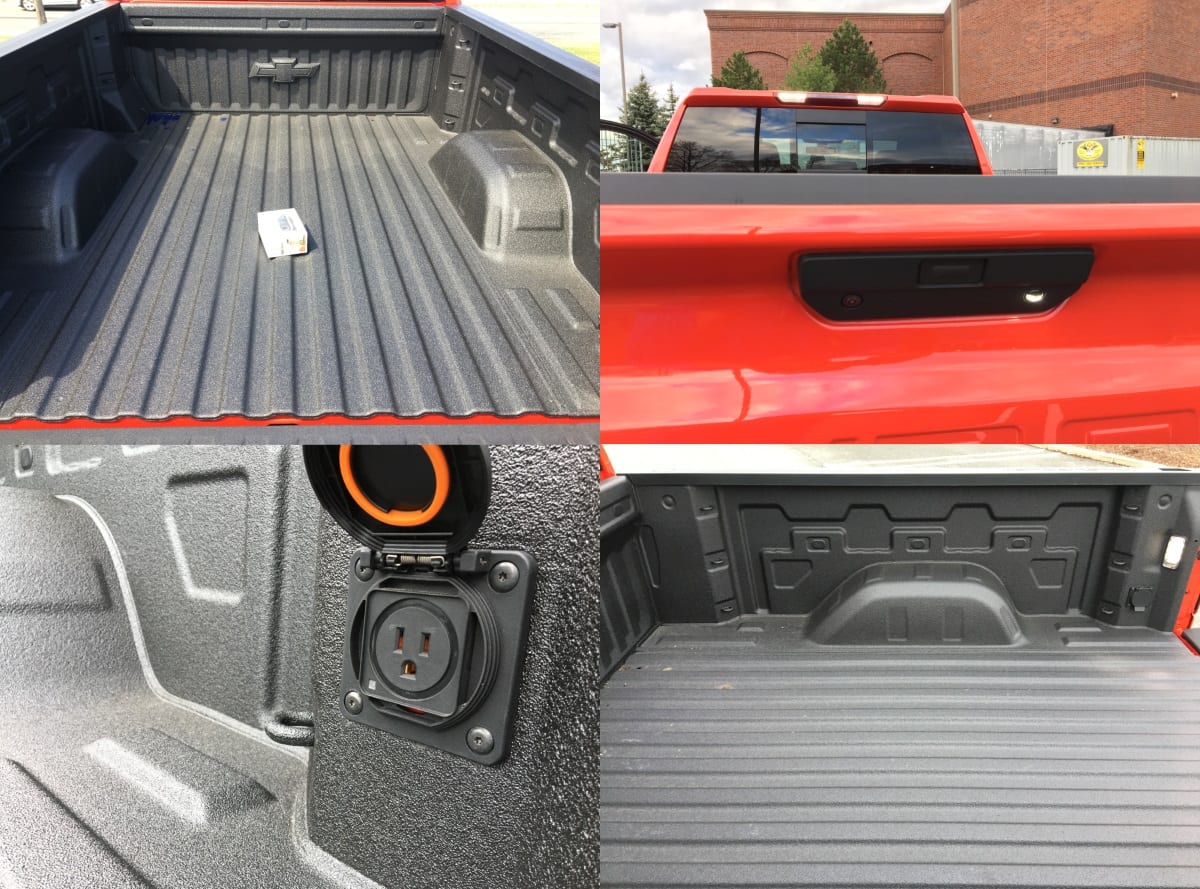 This version of the all-new 2019 Chevy Silverado left me a little disappointed. It looks too angry, the four-cylinder turbo engine is more of a novelty as isn’t any more efficient than a V8, and the interior looks like a carry-over from the old truck. Much like the Nissan Titan I reviewed some time back, it’s not a bad truck on its own. The issue is that the pickup truck market is the most competitive in automotive universe and it feels like the Silverado is lagging behind the Ram and Ford. 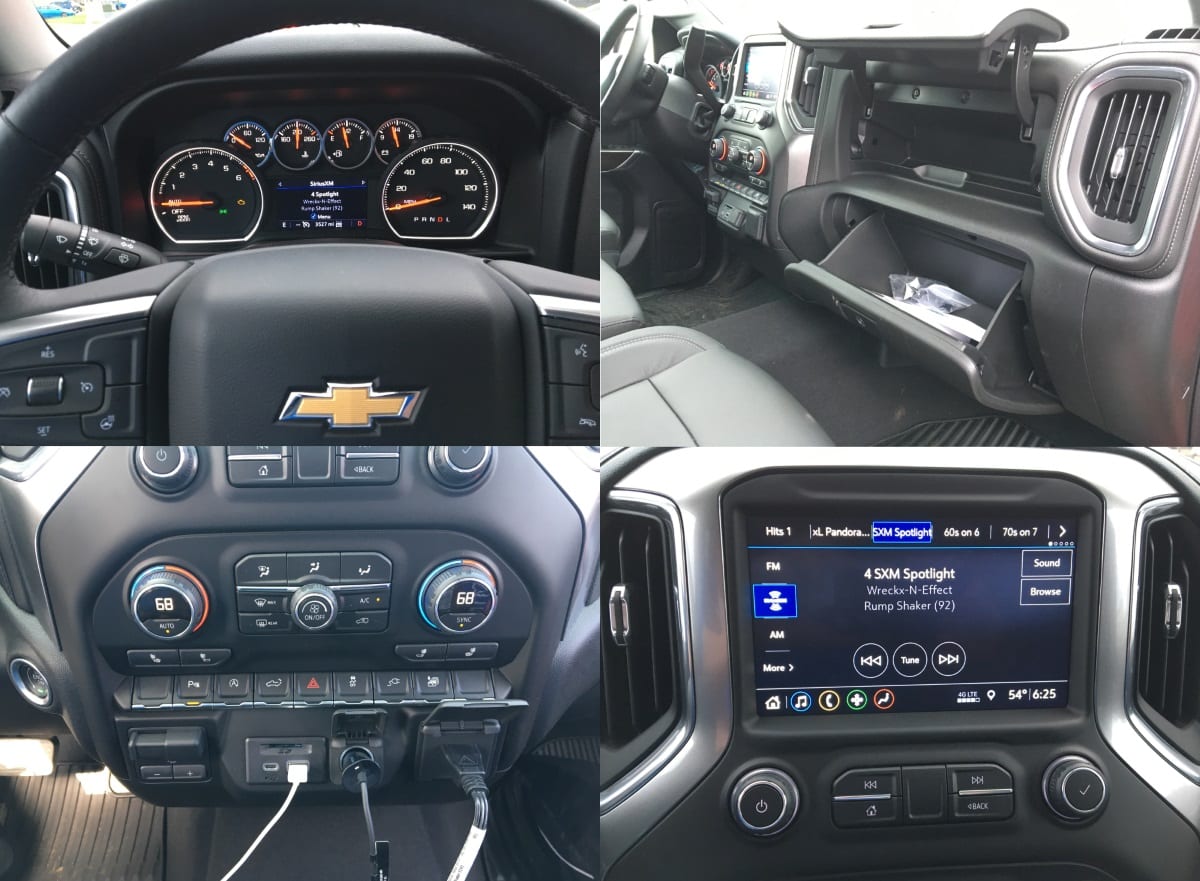 [Disclaimer: Chevy provided the truck for the purpose of this review. Unless noted, all images copyright Kamil Kaluski/Hooniverse 2019.]