There were doubters and skeptics. People laughed and shook their heads. Friends and family questioned my sanity. And yet, my mind could not be changed: I was going to daily-drive my 2013 Mazda Miata Club through the entirety of a Connecticut winter. Rationale? It’s a car, and it will be fun. Easy enough to convince myself. 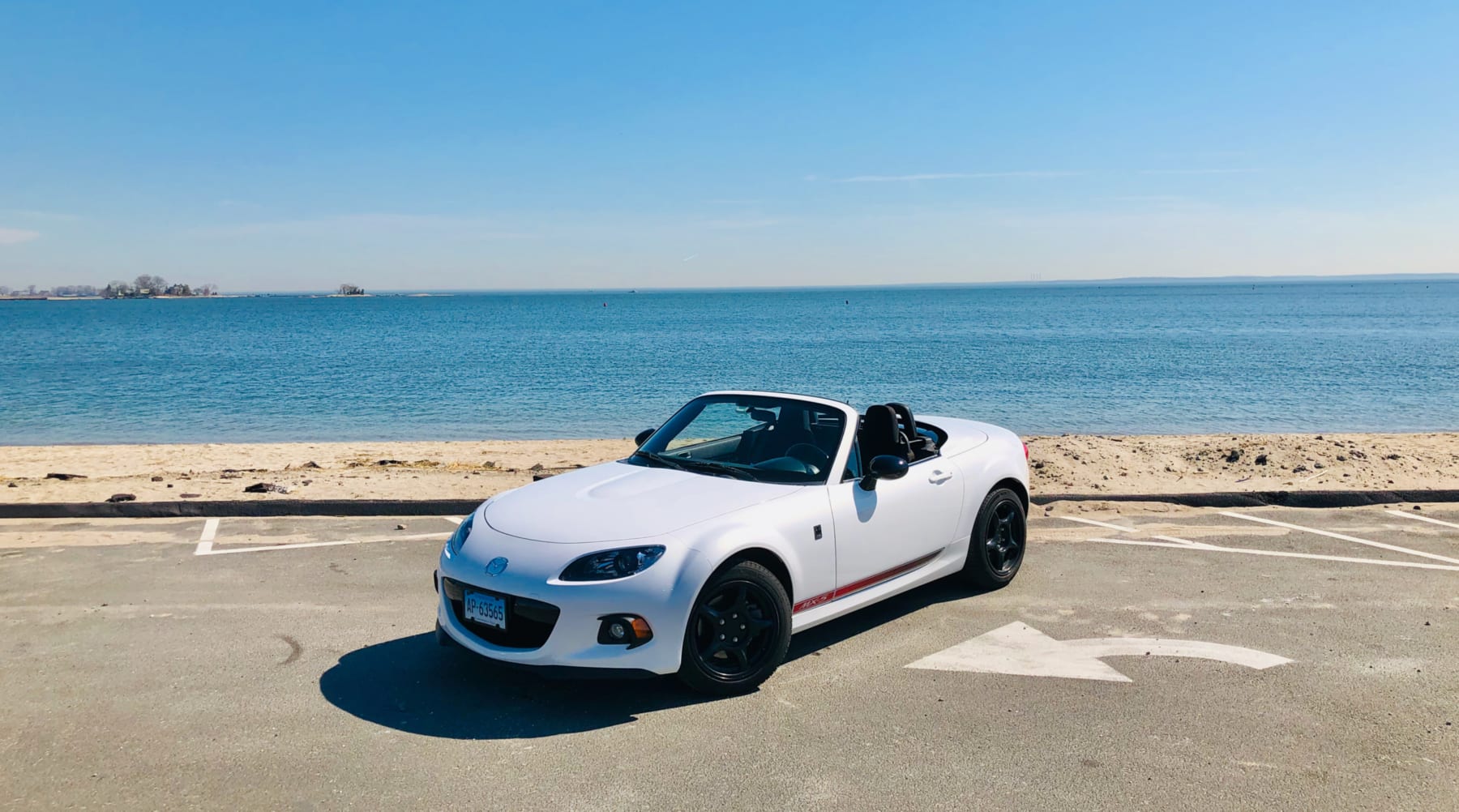 It was a normal Tuesday commute home from work when I knew it was time to ditch the summer tires for the season. The rain was falling and after rising from the high-twenties the temperature was hovering around thirty-eight degrees. Traditional New England November weather: cold rain, the kind of weather that you feel in your bones. A traffic light turned yellow and I had what I thought was just enough time to brake with enough stopping room. The cold, seven-year-old factory summer tires had other plans. I braked lightly at first but the car didn’t want to slow. Applying more pressure kicked ABS into a frenzy. After a few puckering moments, the Miata skidded to a halt deeper into the intersection than I would have preferred. The winter tires went on shortly thereafter. 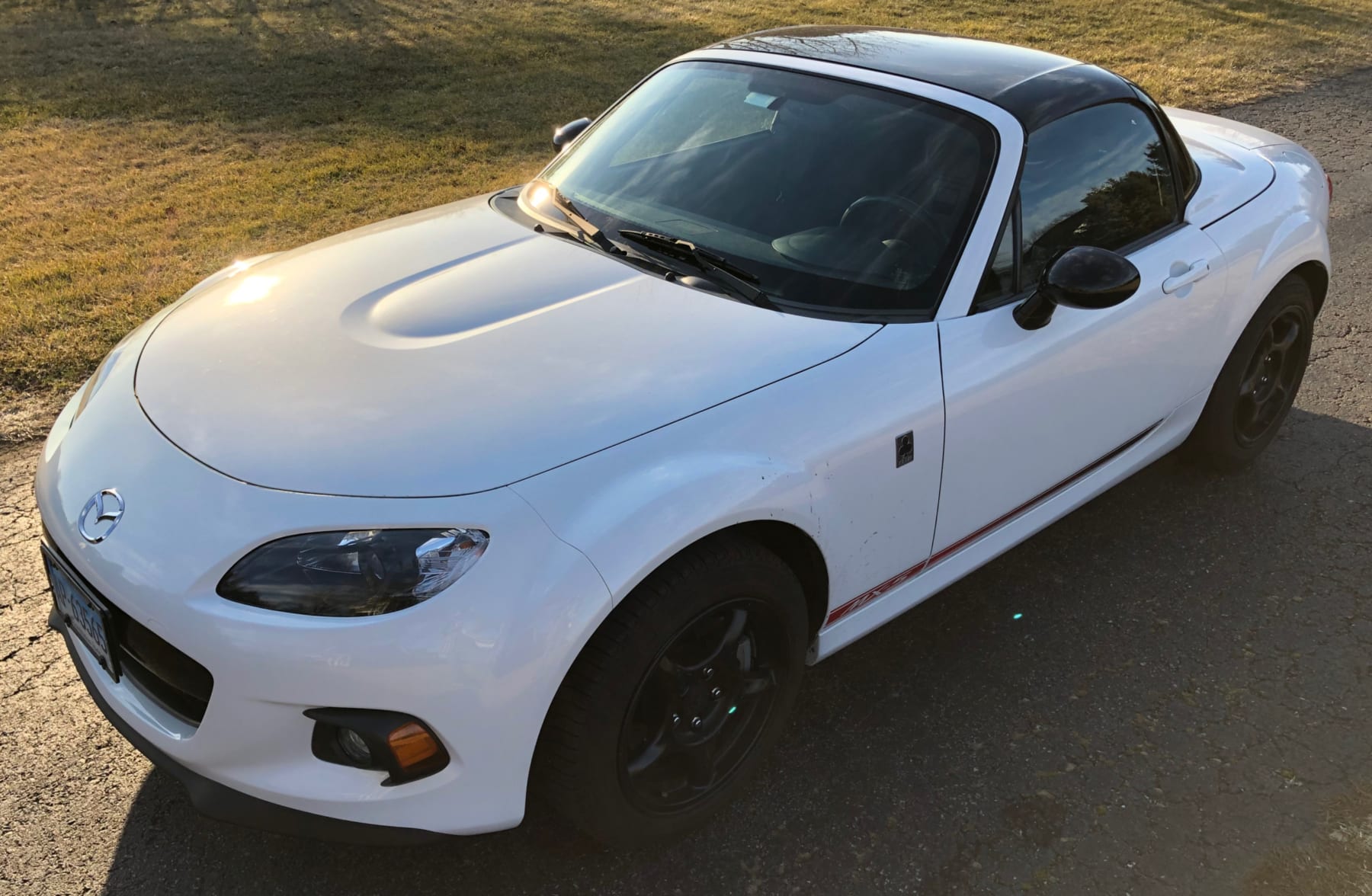 Driving in the winter on summer tires isn’t only bad for traction, it’s outright dangerous. Daily driving the MX-5 through winter precipitation and freezing temperatures would require an honest, proper, dedicated winter tire. With help from our friends at Michelin, I was out to find if Friend-of-Hooniverse Matt Farah’s #justgetthemichelins hashtag had any merit to it. And, of course, I was out to prove to myself and everyone else that the Mazda Miata is a viable winter vehicle and this wasn’t just an idea rooted in sheer madness. 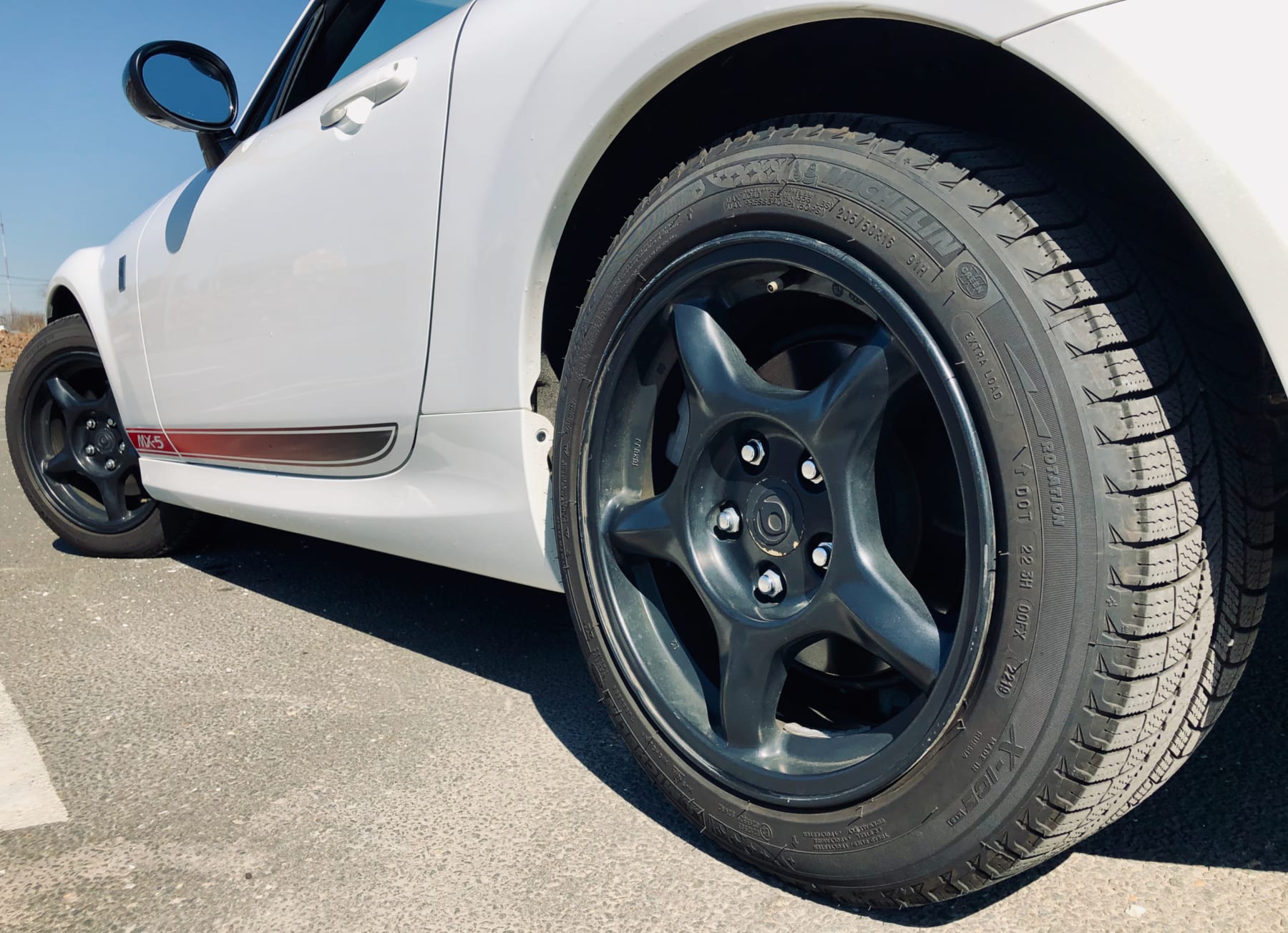 Mounted on OEM Mazda FD RX-7 wheels, they look properly badass and juxtapose the MX-5’s sports car vibe hilariously. But the tires would be nothing if they didn’t work. Luckily they do and do so spectacularly.

Immediately upon hitting the street for the first time with the Michelins mounted, my confidence skyrocketed. With it, so did my feeling that driving the Miata through the winter would be a success. The car was controllable and planted. And, crucially, it didn’t suffer from a lack of grip as it did with the old summer rubbers. Which, in all fairness, is a poor point of comparison. But with the Michelins, the limit was raised as the rubber compound I was driving on no longer felt like driving on hockey pucks. The limit of handling is certainly lower, but it doesn’t break traction nearly as easy. 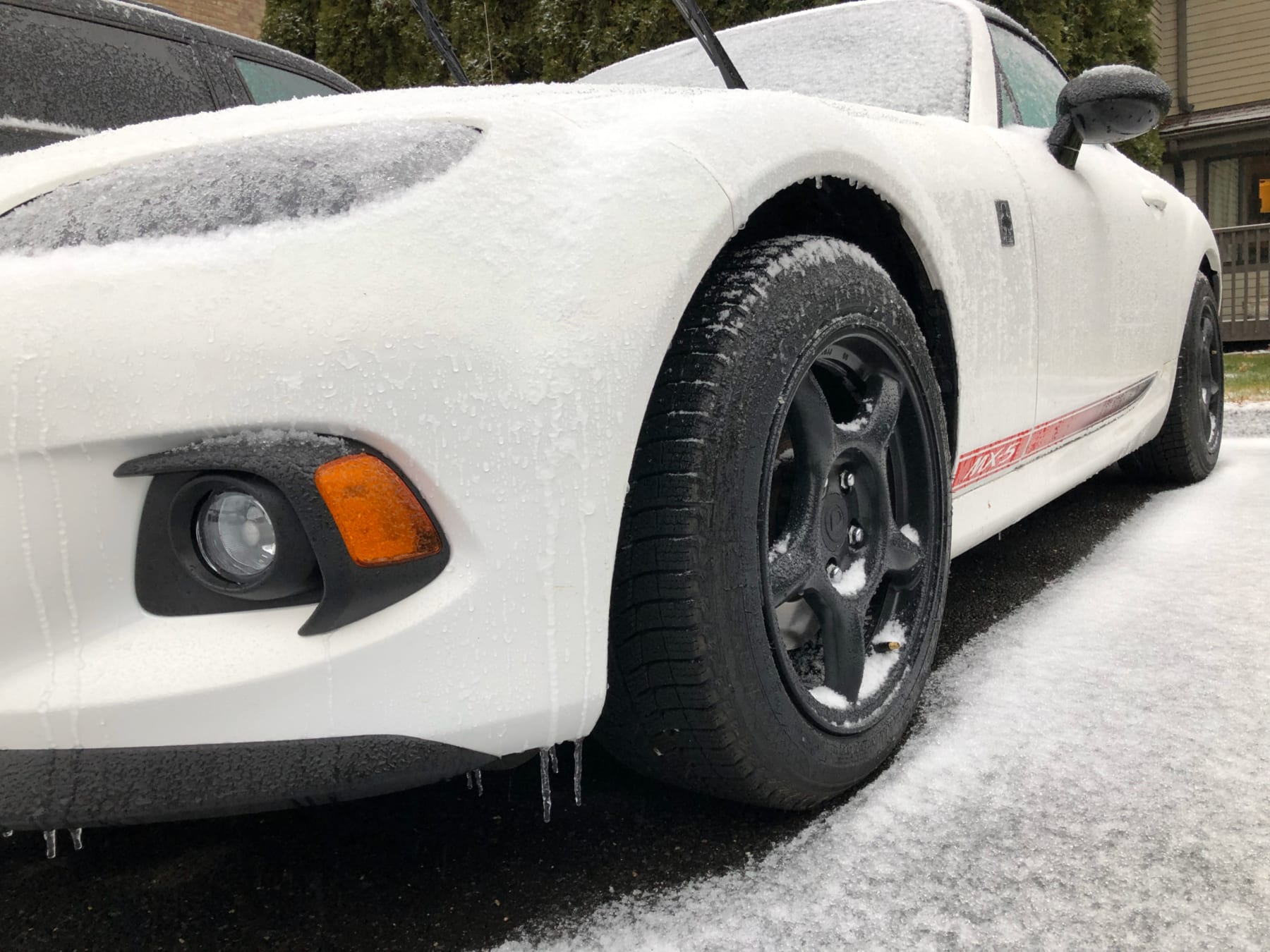 As enthusiasts know, rear-wheel-drive allows for a special kind of control. It’s proper hand-eye-foot coordination. You steer not only with your hands but with your feet. Every action has a direct consequence. And sometimes it makes for an unsolvable situation. Proper skill and actions allow for make-it-or-break-it situations when the snow is deep or the roads uphill. It can be daunting but it’s entirely satisfying when you make it somewhere a 4WD vehicle didn’t try or couldn’t. And it’s especially gratifying to get that snow slide just right. 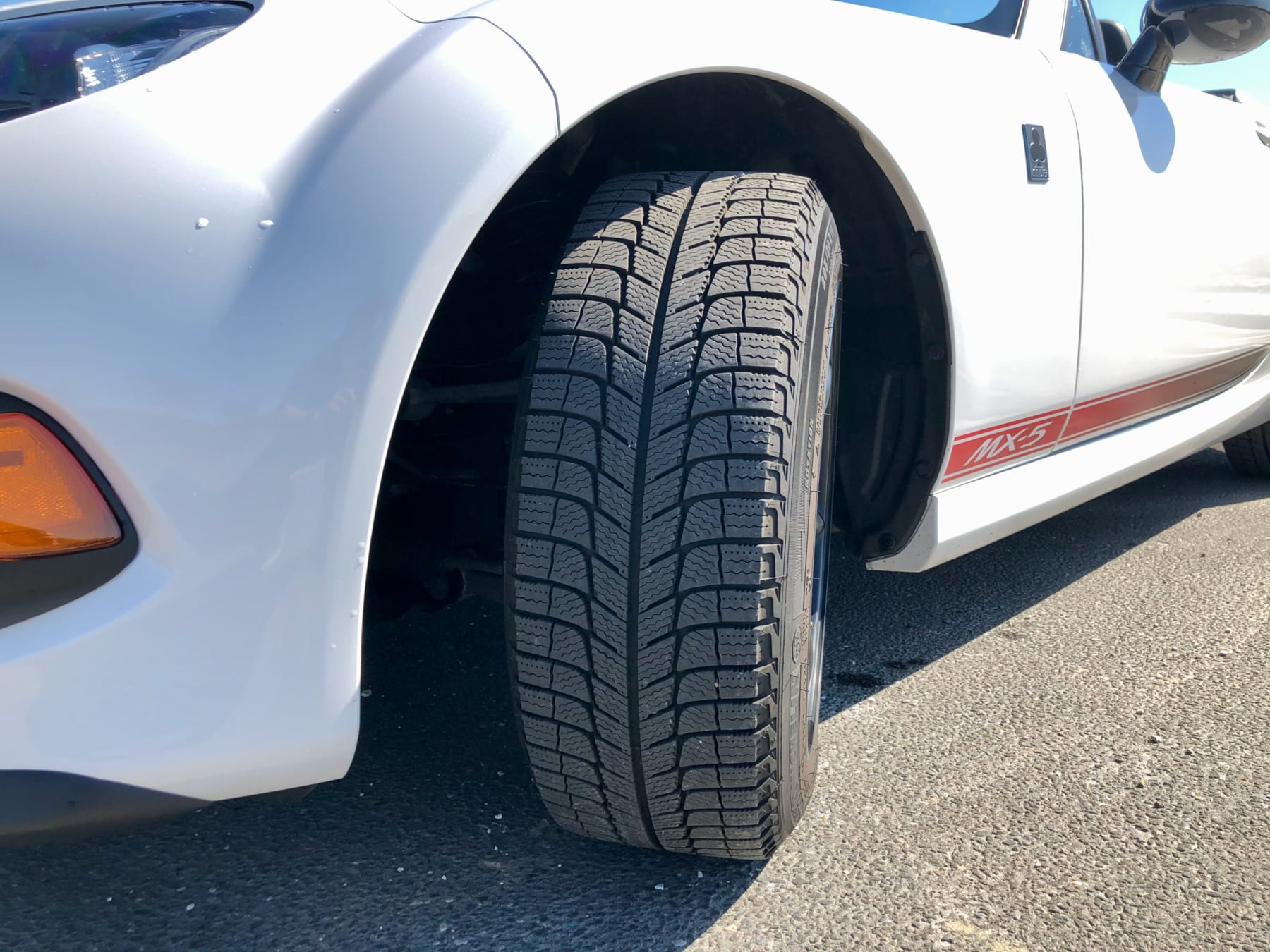 Problem is, you can’t make it snow. I don’t exactly wish for blizzards but a little more of the white stuff wouldn’t have hurt for this test. The season has provided very few snowy situations so far. But I made sure to go for a drive every chance I had. 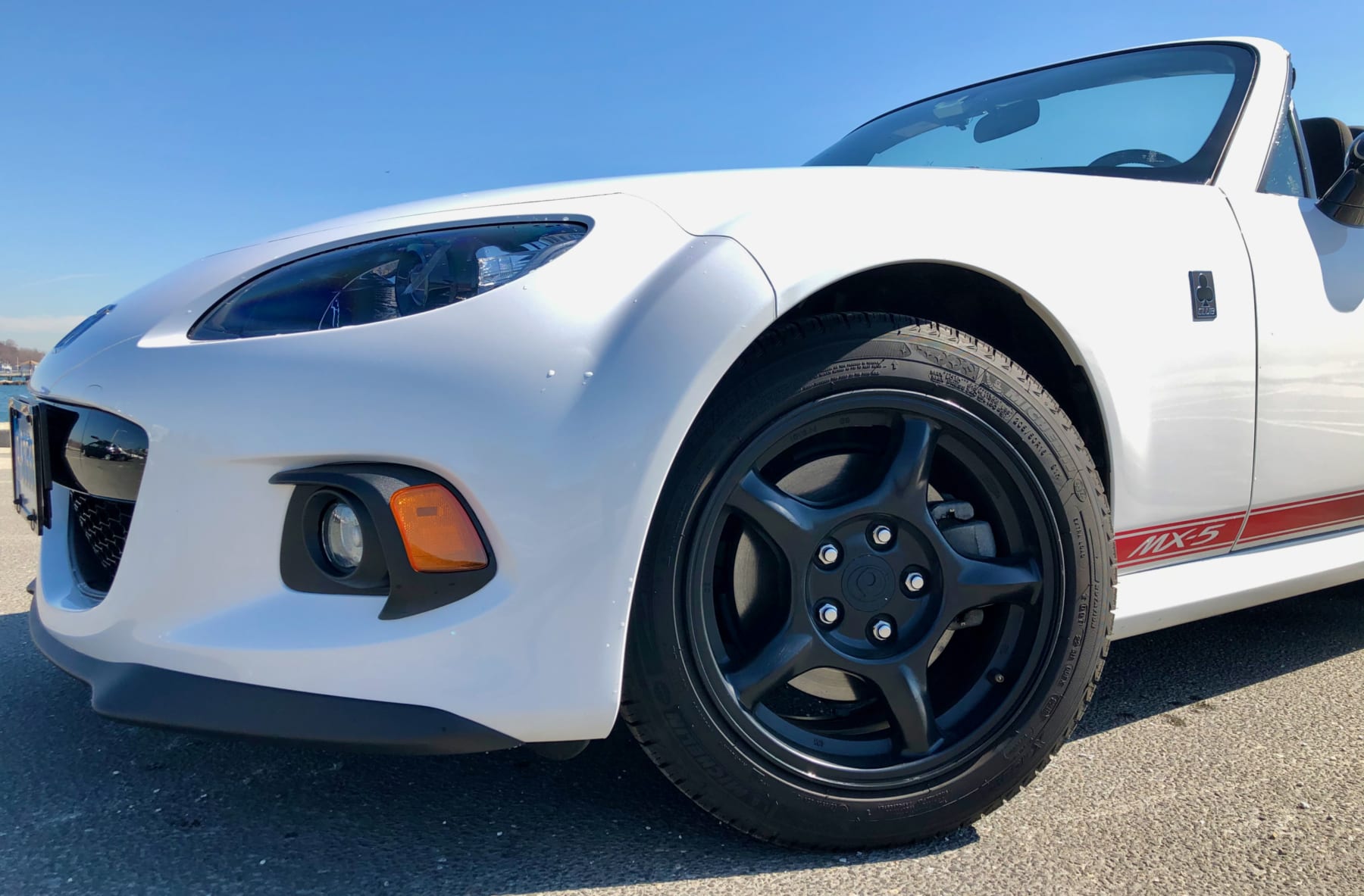 In short, the car– obviously with help from the tires– performed flawlessly. No, it’s not a four-wheel-drive vehicle on winter tires. But it was certainly more fun. Sure-footed, predictable, and confidence-inspiring. In about four inches of unplowed powder, the Miata was unstoppable. Even climbing a fairly-steep hill couldn’t slow it. And from a dead-stop on said hill, forward traction was extremely easy to attain. And that’s even with traction and stability control turned fully off. Passing struggling crossovers, trucks, and SUVs was astoundingly easy. As easy as it was satisfying to see the faces of those shocked by my little roadster unfazed by the snow. 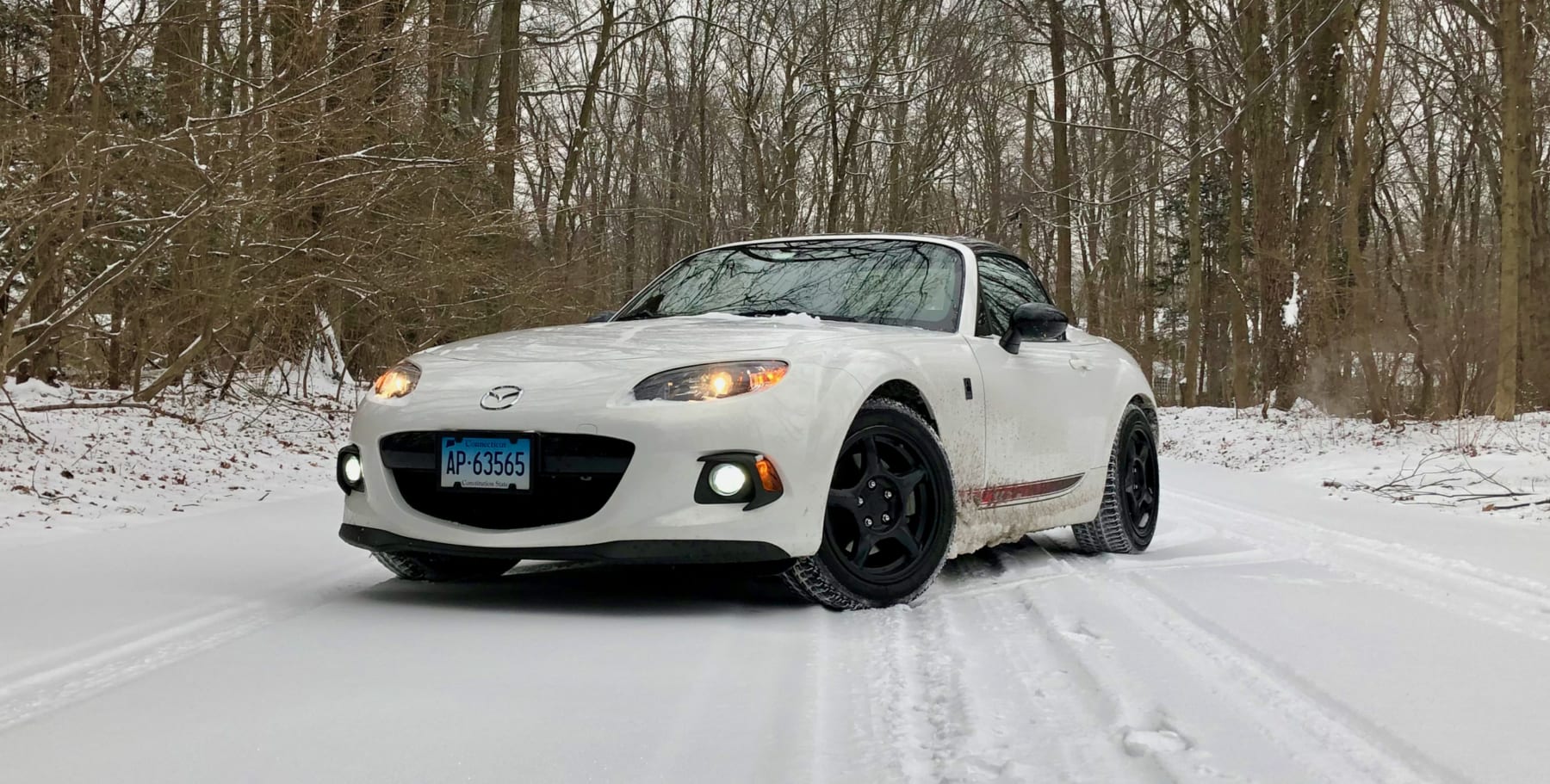 And how about the X-Ice’s ability to maintain the Miata’s inherent sportiness? The sublime handling is still largely there. It’s not nearly that of when mounted on the summer set. But it still handles well enough to make me laugh when commuting. I even drove around with the roof down a few times, winter tires happily gripping as the Mazda trotted along. Top up or down, the Michelins are quiet and, like in the snow, predictable.

Part of the benefit of the winter compound is the ride quality. Dropping down to 16” wheels allow the Michelins to shine. The improvement in impact absorption afforded by the larger sidewalls is significant. Though there was a large change in roll softness on the sidewall itself– most noticeable in hard, sharp cornering– it did translate to hitting potholes becoming even less problematic. A seriously good thing for Connecticut winters. 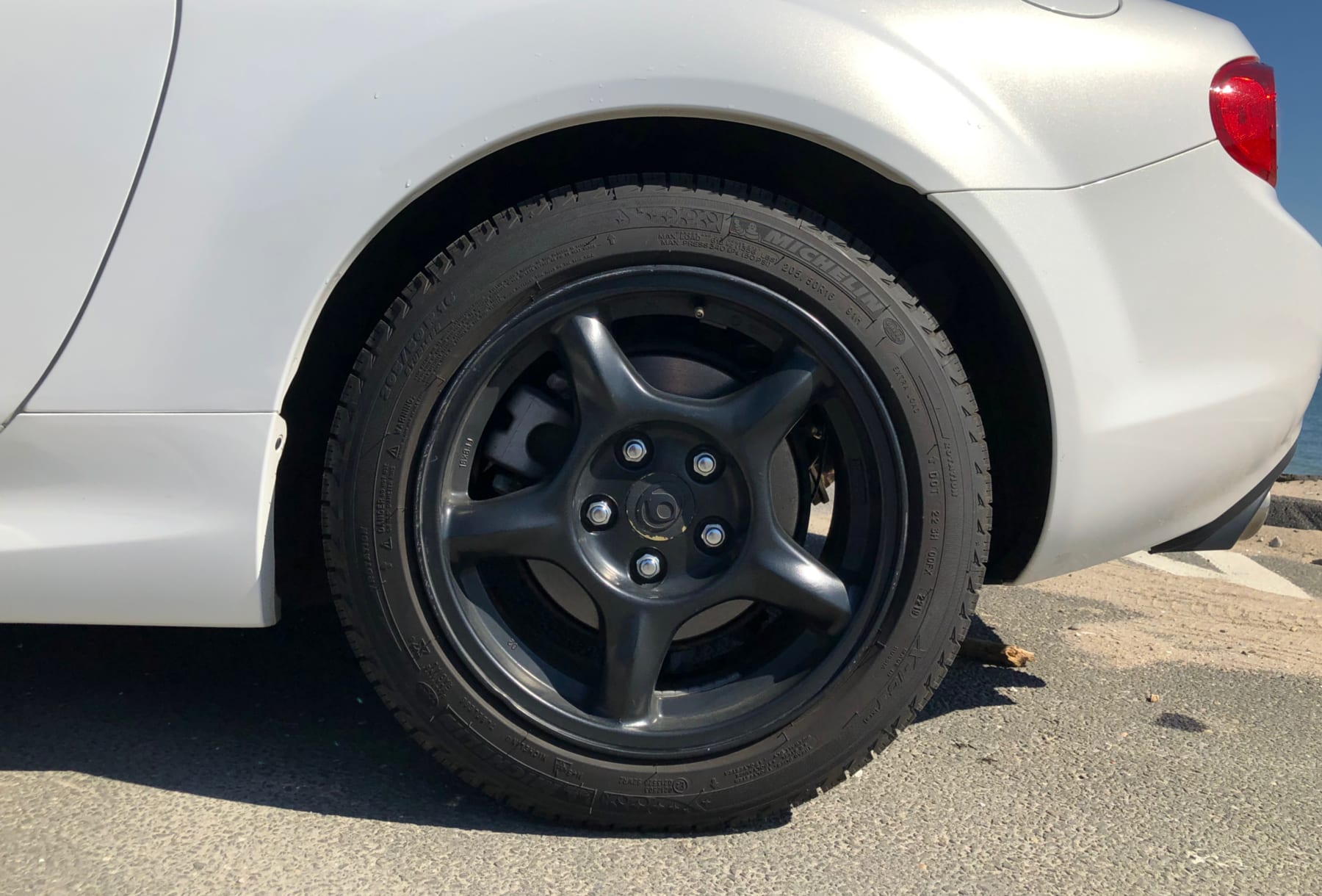 My one minor gripe is how the tires did in the rain when it was in the 50-55*F range. The warm temperatures led to some imprecise handling effects, specifically on the highway when driving through standing water. It wasn’t a matter of hydroplaning but rather a bit of wandering when cruising at speeds near the speed limit. But let’s be honest: these are neither the temperatures nor the precipitation these tires are meant for. And given the circumstances and quantity of rain present, the tires did just fine. 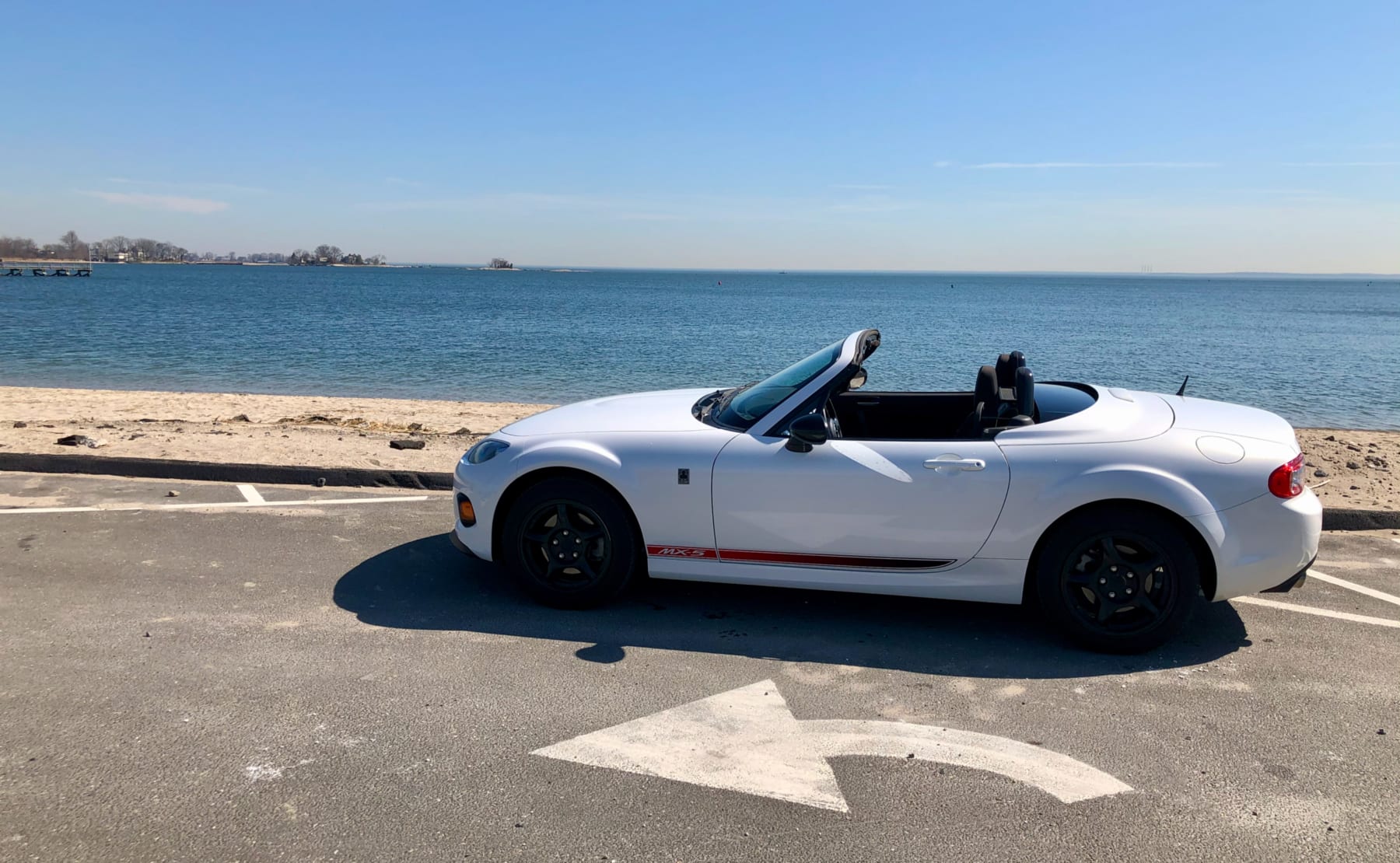 All-in-all, Farah seems to have been right: just get the Michelins. On my long-departed Challenger, I had experimented with numerous other brands of winter tires but these X-Ice Xi3s have been my favorite thus far. And let’s be honest, the fact that the tires are able to stand up to CT potholes without so much as a sidewall gash is a feat in of itself. That the Michelins grip well, look gnarly, are fairly quiet, didn’t hamper gas mileage severely, and have shown little-to-no wear in a full season of use is the icing on the cake. I already look forward to running them again next winter. 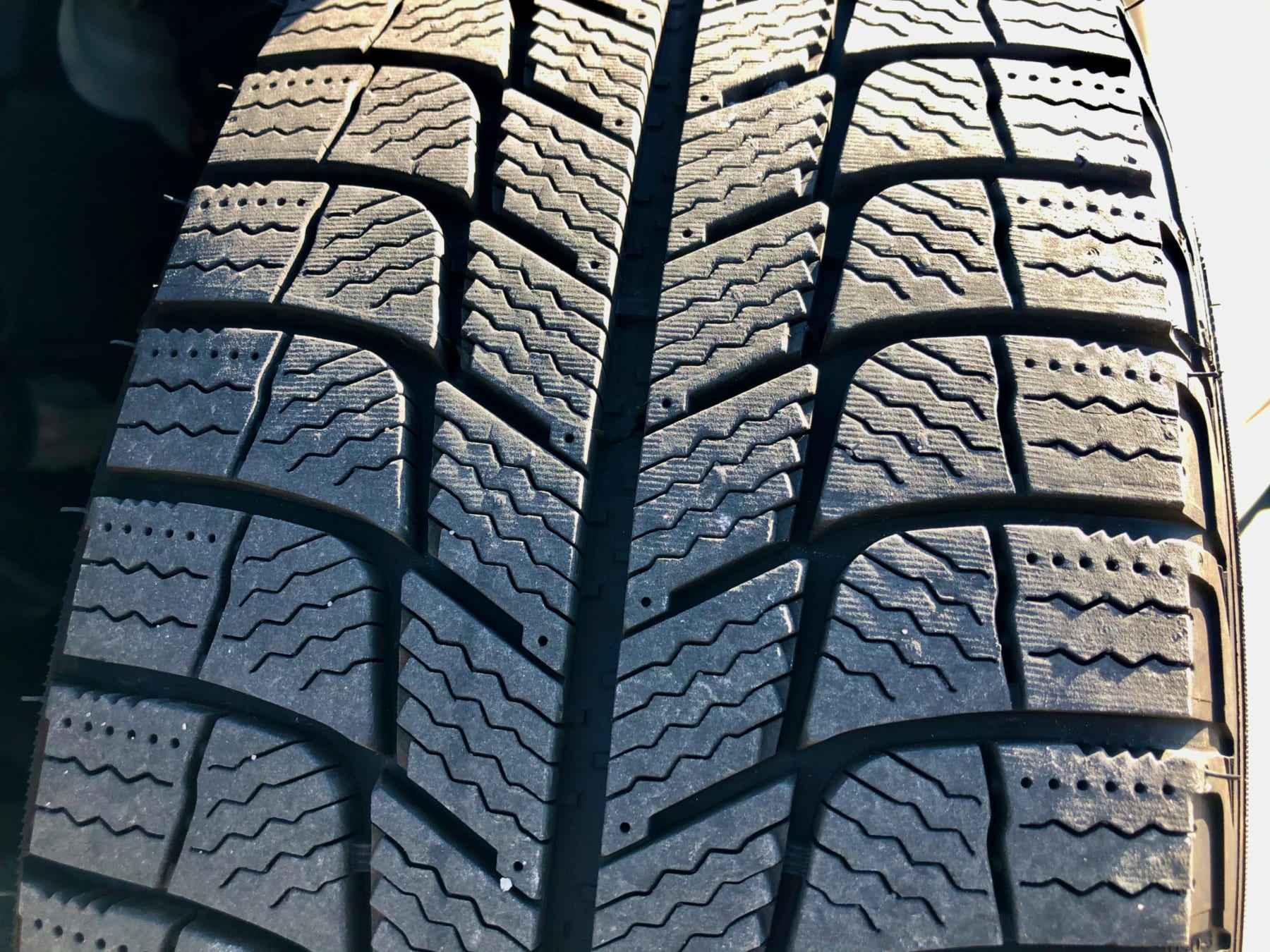 Winter in Connecticut is a weird thing. One day it’s bitterly cold, the next I’m driving home with the roof down and then the following it’s snowing.

The Michelin X-Ice Xi3 boasts exactly what a good winter tire should bring to the table. In the process it helped my beloved Miata become fully winter capable, allowing me to enjoy driving it year-round. Take that, doubters. 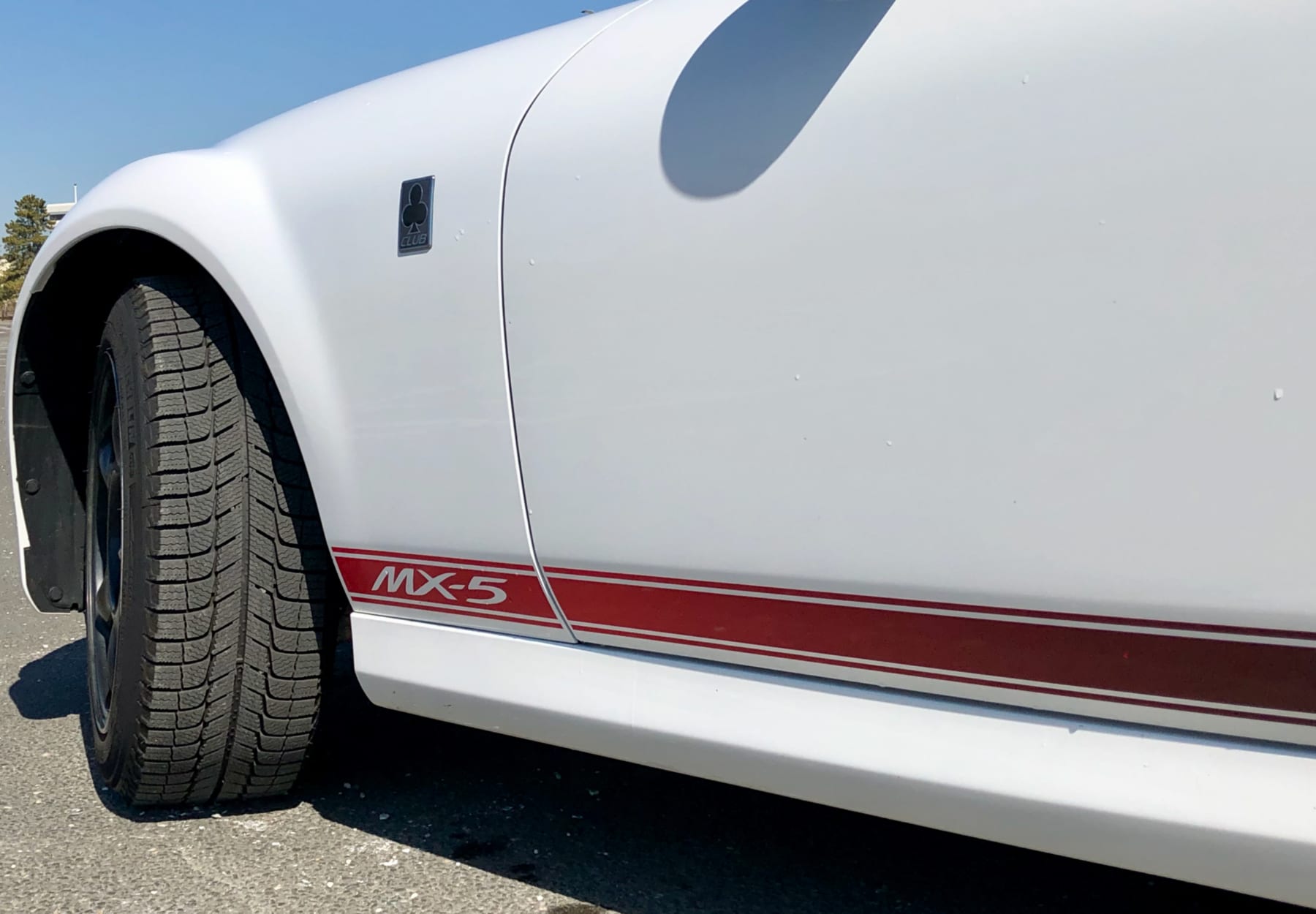 [Disclaimer: Michelin provided this set of tires free of cost.]