Jeep faithful have been waiting for this vehicle for decades. It’s been so long that business models were developed around converting Jeep Wranglers into pickup trucks. But it’s finally here, the much speculated, debated, and anticipated Jeep of all – the Gladiator pickup truck.

But is it good? Is it what the Jeep fans wanted? Does it live up to the hype?

For 2020 the Gladiator comes in four versions: Sport, Sport S, Overland, and Rubicon. Of those, the Rubicon and the Sport models with the optional Max Tow Package are more significant models. The Rubicon because of its off-road hardware, such as locking differentials, 33-inch tires, and disconnecting sway bars. And the two Sport models with Max Tow Package which allow for class-leading 7650-pound towing capacity. The Max Tow vehicles use the Rubicon’s beefier axles and 4.11 gear ratios but don’t have the lockers. It should be noted that the Max Tow package requires the optional eight-speed automatic transmission.

The Overland is the model for a casual buyer, those wanting a nicer vehicle but not caring about too much about driving off pavement or towing. Interior is finished with nicer materials and it has options that are not available on the Sport models. In the near future there will undoubtedly be special edition models because FCA loves special edition models.

Interesting fact: While the look similar, the slats on the grill are bigger on the Gladiator to allow adequate cooling the engine needed for the increased towing capacity over the Wrangler.

To no one’s surprise, the interior of the Gladiator is all Wrangler. It’s comfortable, functionally modern, yet still industrial, simple, and utilitarian. It is also resistant to water from the occasional fording and getting caught in the rain without the top. There are drain holes in the floor for when you really get messy.

The obvious big change from the four-door Wrangler is the rear seat. It is not removable but the back does fold forward. In doing so it turns into a shelf and provides access to a storage area that is behind it. The bottom cushion of the rear seat raises to allow access to another storage bin and the jack. On some models this storage area is lockable. Rear passengers also get their own cup-holders and on some models USB charging ports.

Interesting fact: There is an optional removable Bluetooth speaker that can be taken out and used for tailgating. 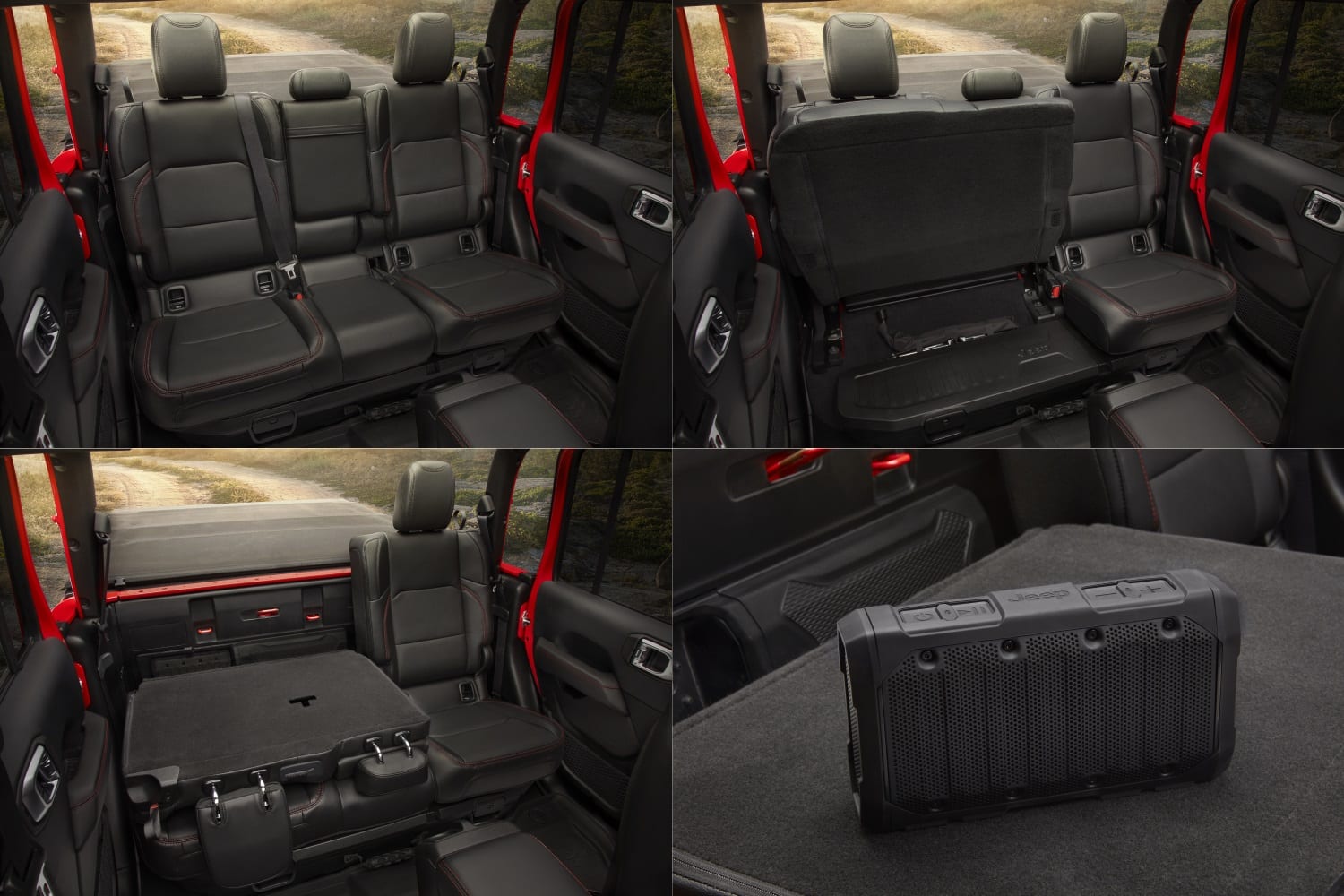 The trims and colors vary with each model. The Sport and Sport S are the basic models – plastic dash, cloth seats, with a smaller central screen. It’s got everything you need and nothing you don’t. The biggest difference between the Sport and Sport S is that the S has power windows and locks, whereas it’s all manual in the Sport. I should note that the cloth fabric seems to be of good quality whereas the optional leather on other models is just okay.

Gladiator’s steel cargo bed is roughly four-and-a-half feet wide by five feet long, and almost 18″ deep. The tailgate has a handy feature that allows opening of 45-degrees. With a two-by-four placed in bed niches, this will allow the transport of four-foot wide planks that are longer the length of the bed. The tailgate itself locks with the power doors. Please watch the above video as Jeep’s Mark Allen does a better explanation of it than I can.

The Gladiator I drove had the optional roll-up tonneau cover. A bed cover is handy thing to have, and as seen in the video it has a cool feature which allows for the transport of long two-by-fours and other such items. But it is not lockable – it does not protect the items in your bed from thieves. Jeeps reps told me that a hard, lockable tonneau cover will soon be available.

Interesting fact: On the front wall of the bed are imprints of dirt bike tires, which is where Jeep says you should position your dirt bikes. 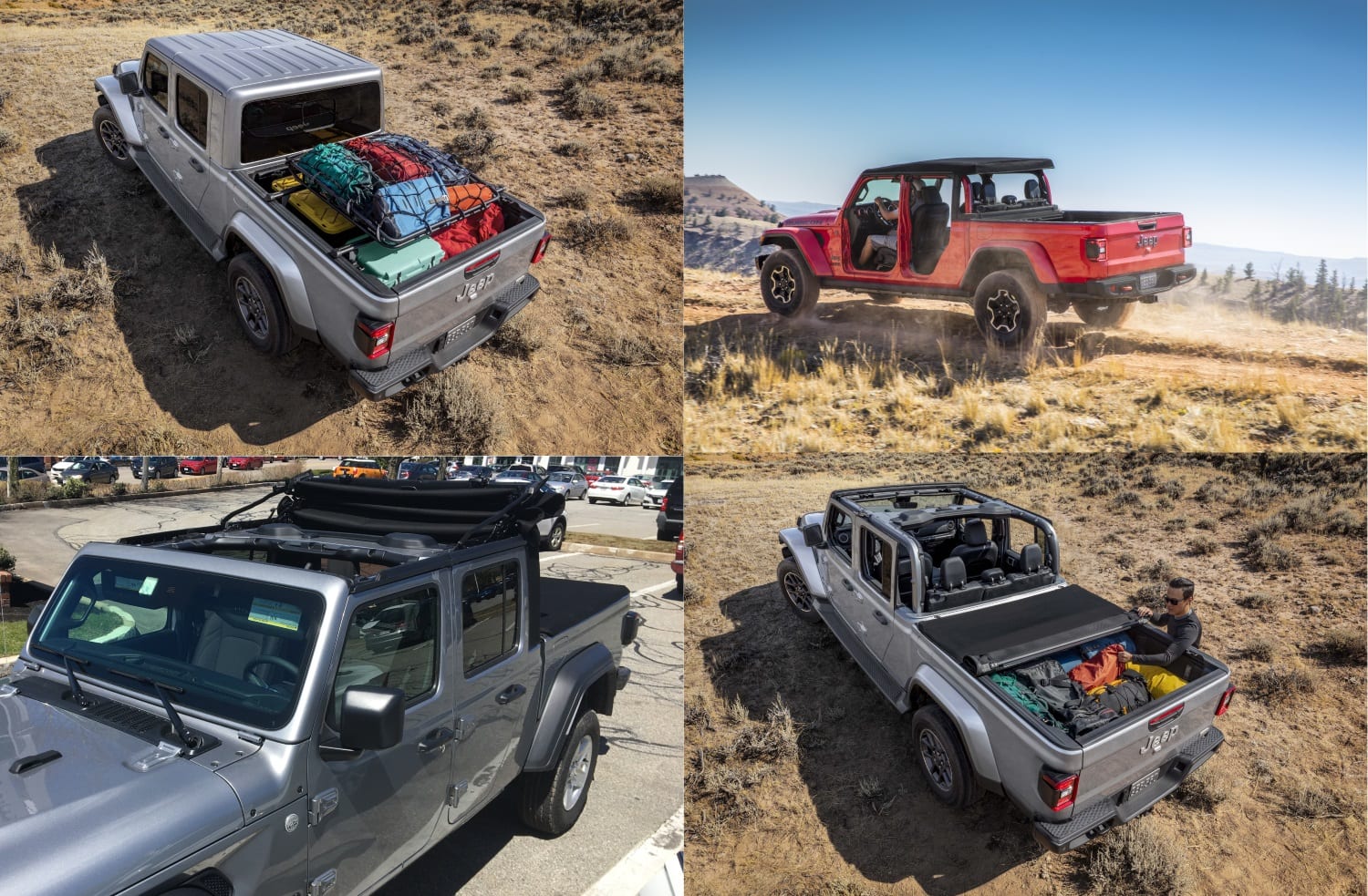 Like the Wrangler, the Gladiator comes with a softtop and has an optional hardtop. I drove the softtop model from Boston to New York City and back. My expectations for noise were low but the softtop isn’t that bad. An abundance of wind noise and road noise is present but it isn’t tiring or annoying – a phone conversation can still be held with the windows up.

The softtop folds rather quickly: undo the two windshield header latches and flip it back – it helps if you’re tall. At this point the roof is sort of a big sunroof. The rear window is mounted on rails and easily slides out. Then the C-pillars can be snapped out. Removing it completely is possible but not really necessary. Alternately, the top can be in closed position, providing a shade for the passengers, and the rear window and pillars can be removed.

The hardtop be had on all models but on the Overland and Rubicon it can be colored-matched to the body. Like on the Wrangler, it’s a three-piece deal, where the two front panels over the front passengers can be easily removed. There is a standard rear sliding window with a defogger. It should be noted that the Gladiator could technically transport its hardtop in the bed but it’s not recommended.

Interesting fact: Due to the removable tops, the third brake light (CHMSL) was integrated into the tailgate, above the handle. 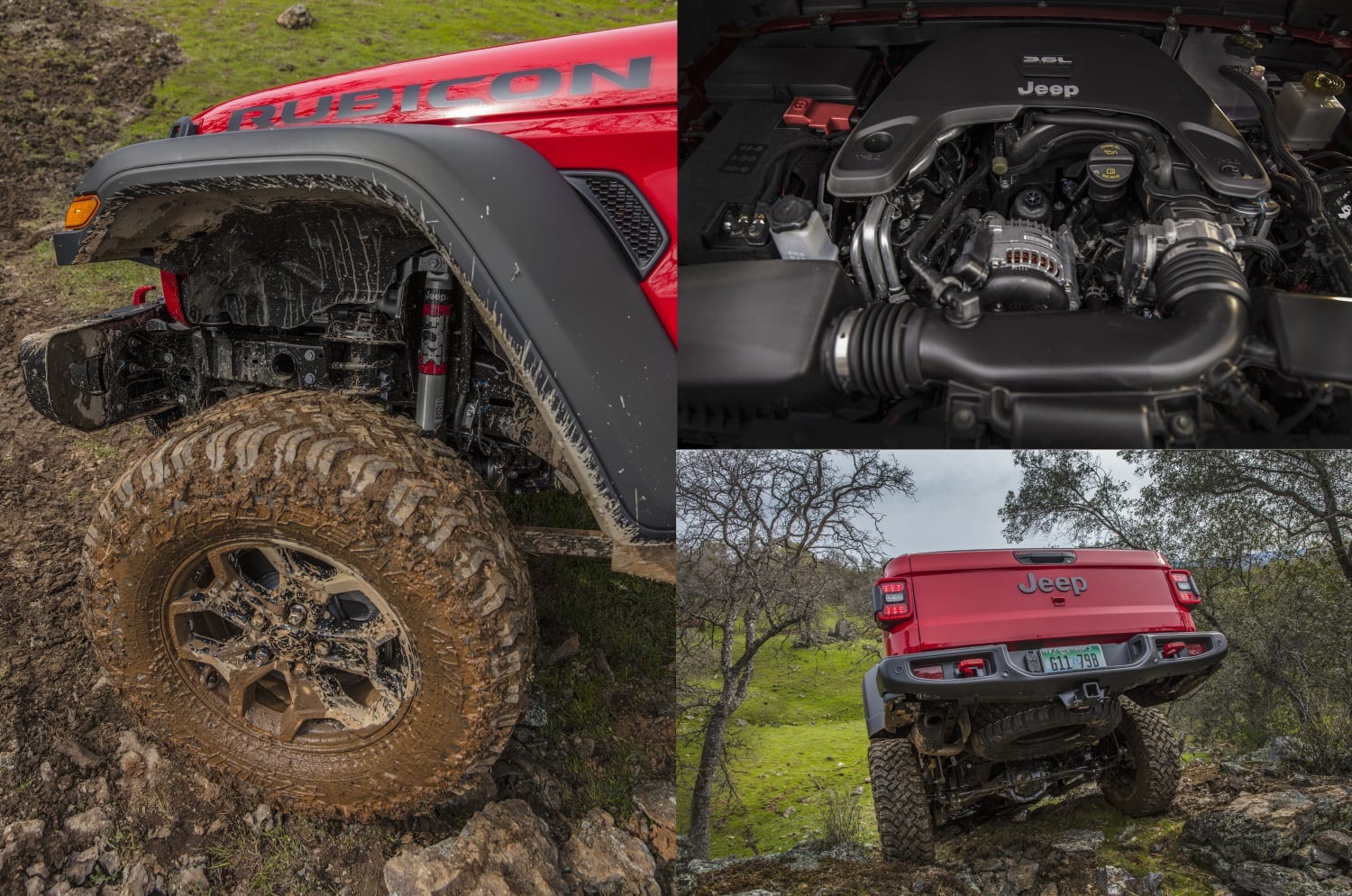 Non-Rubicon Gladiators get the NV241 Command-Trac transfer case and Rubicons get the beefier NV241OR Rock-Trac with a lower, 4.0:1 low-range gear. Jeep confirmed that the excellent EcoDiesel V6 that was on and off again available in the Grand Cherokee and RAM 1500, which produces 240 horsepower and 420 lb-ft of torque, will be available on the Gladiator.

The stick axles are suspended on coil springs. The Rubicon model gets fancy Fox off-road shocks along with disconnecting front sway bar, which allows more axle articulation off-road. The Rubicon also gets locking differentials in the front and rear. Other models have open differentials but a rear limited-slip diff is optional.

Interesting fact: Jeep knows that people love lifting and putting bigger tires on their rigs. While the Rubicon comes with a set of meaty Falken Wildpeak 33-inch tires (LT285/70R17), the spare tire area under the bed can accommodate a 35-inch tire. 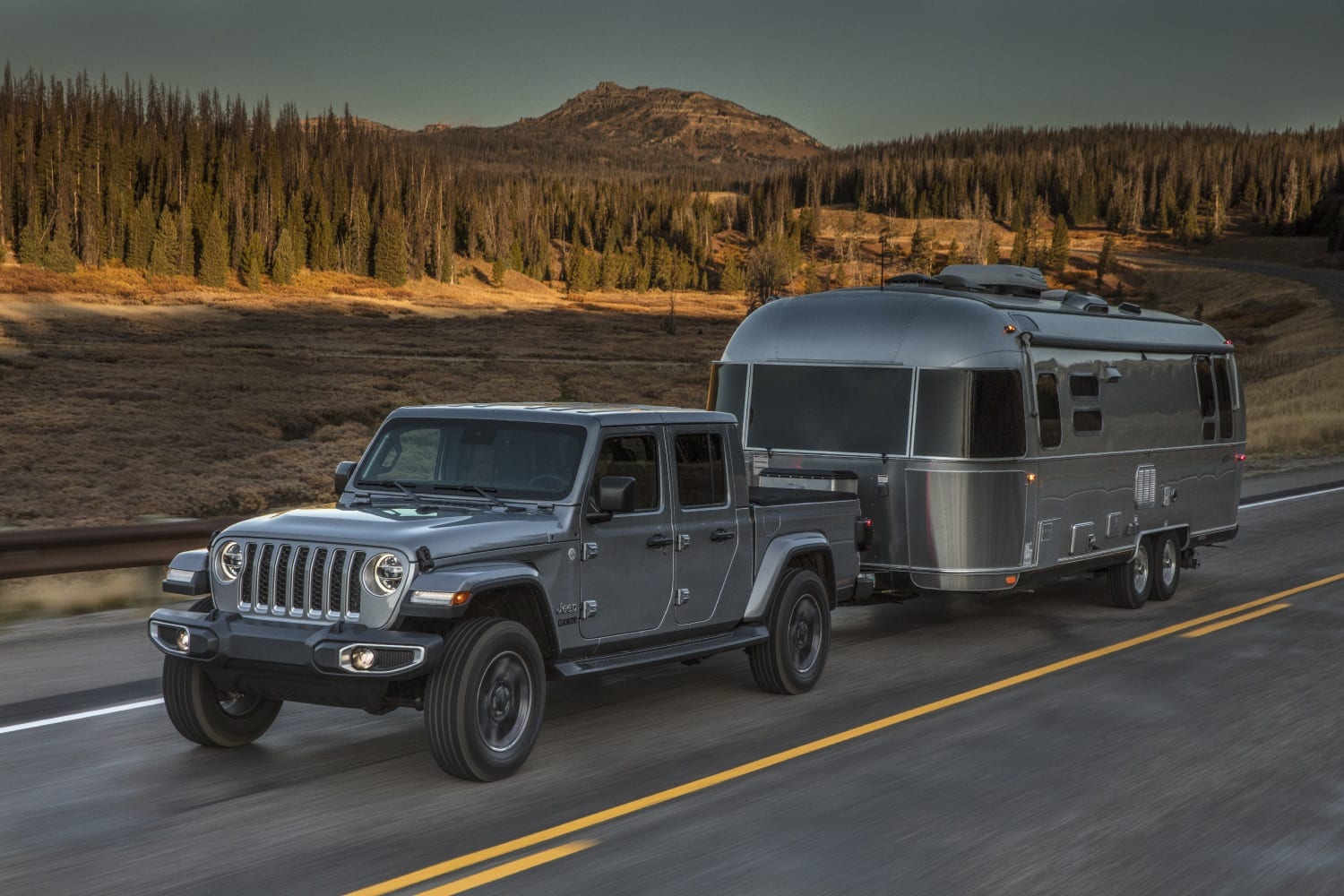 Cargo bed aside, the biggest difference between the typical Wranglers and the Gladiator is the ride. The stretch of the wheelbase by 20-inches seems to completely transform the Gladiator from, well, a Jeep, to something that drivers like a full-size pickup. On the highway it behaves much more predictably – it’s simply more stable and less bouncy. Even highway speed lane changes are free of drama. At a press event I drove the Gladiator back-to-back with a four-door (née Unlimited) Rubicon model over the same roads. The Gladiator was much smoother overall, with less body dive under braking. My most critical observation was that the Gladiator is very susceptible to cross-winds.

The Gladiator will allow you to take between 1105 and 1600 pounds of stuff with you on your ride. If your stuff does not fit in the bed, a trailer weighting between 4000 and 7650 pounds can be attached. The payload and maximum trailer weight are factors of different suspension springs, tires, and transmissions on different models. Choose wisely. 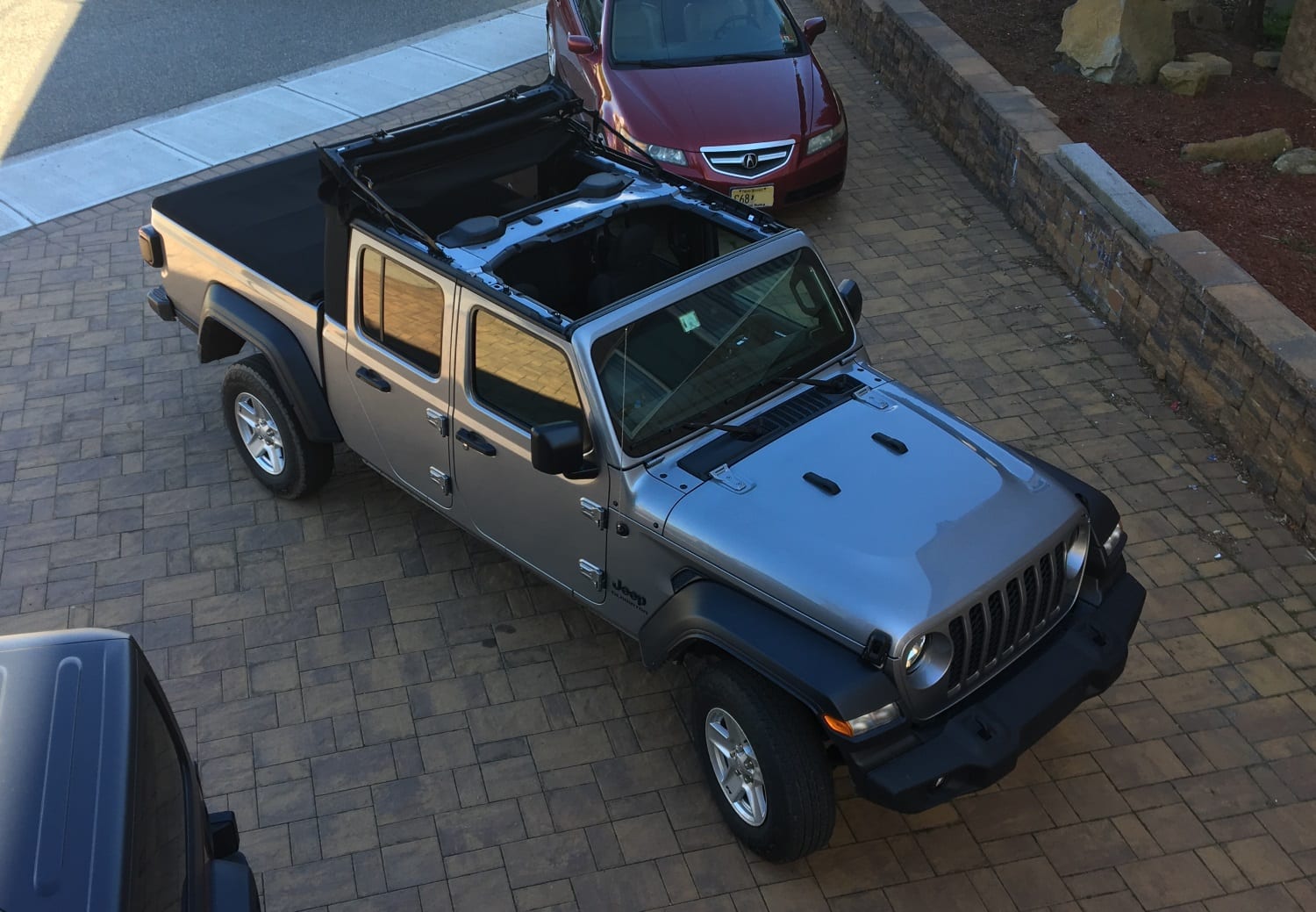 The silver model seen in these pictures is the Sport S with the Max Tow Package, so you could say it’s the stronger one. The 7-inch radio group with Apple CarPlay and Sirius radio was then added, which also required the Convenience Group with a remote starter. Cold Weather Group, which includes heated seats and steering wheel, is a no-brainer for a Wrangler as it comes in handy even on summer nights. This model also had new-for-JL Active Safety Group and Adaptive Cruise Control/Forward Collision Warning systems, which I thankfully didn’t test. Auxiliary Switch Group are four pre-wired dash switches for stuff buyers could add later on, such as additional lights. There was also the bluetooth speaker which required the upgraded Alpine audio system. With almost Porsche-like $10,000 in options, the total manufacturer suggest price for this vehicle was $47,790. 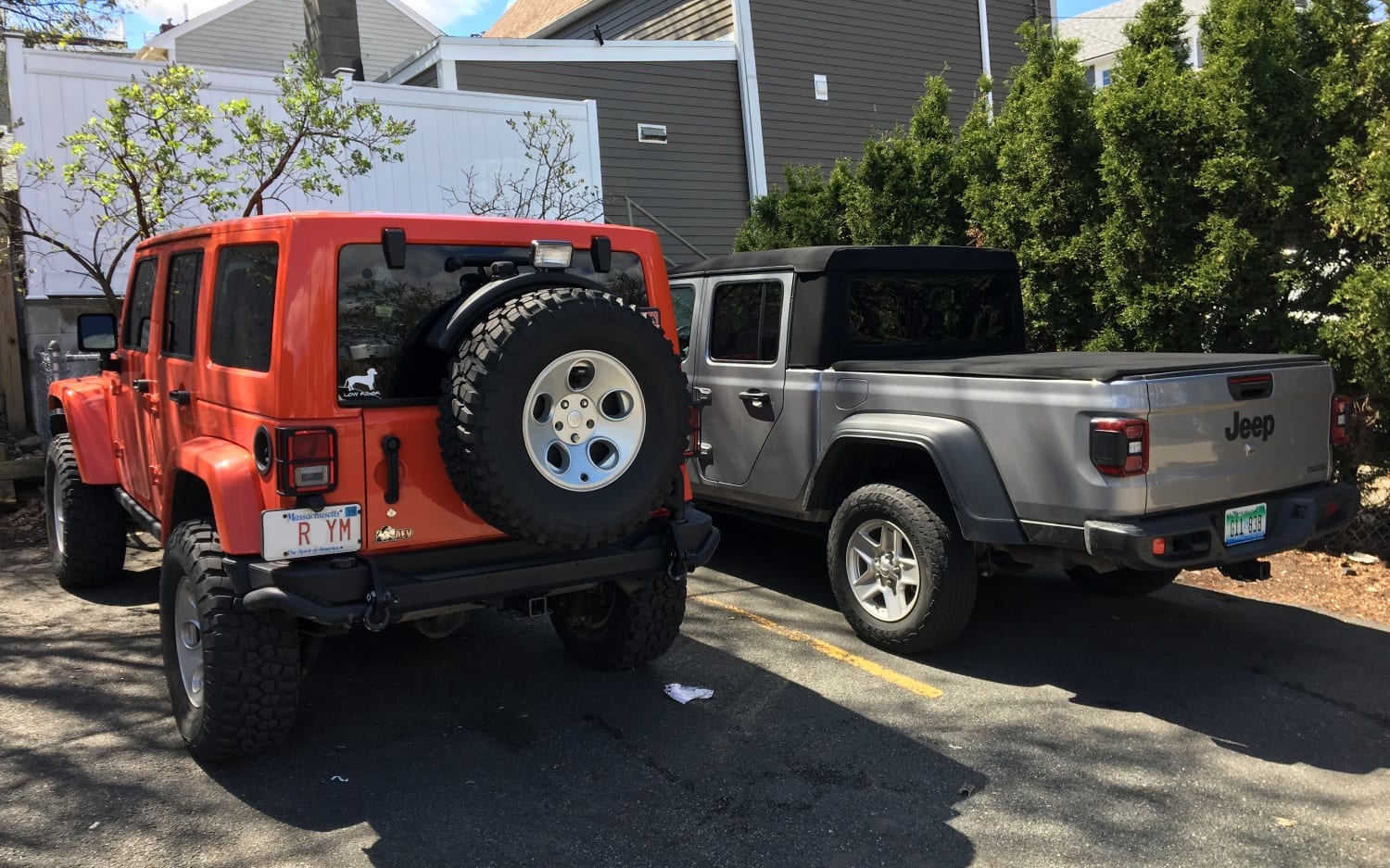 Compared with the Wrangler, the Gladiator has a much nicer ride and is more functional. Longer wheelbase will only present challenges for hard-core off-roaders but everyone else will benefit. It wasn’t until the JK Unlimited that Wranglers, including the CJ predecessors, gained actual cargo space. With the decent size bed and the future availability of various covers, racks, mounts, and caps for it, this is by far the most functional of all Wranglers.

It took a long time but the Jeep pickup is finally here and it’s really good. It’s an off-road goat, it’s smooth on the road, it’s got space and towing ability. It’s a damn convertible pickup with room for five. It can be a lot of things to a lot of people. Other than the price, I can’t think of a reason why the Jeep faithful wouldn’t like it. In my time with the Gladiator, I was approached by many people with many questions. Interestingly, many of those questions came from people who have never considered a Jeep or a pickup before. I predict that this vehicle will be a huge success for the Jeep brand. 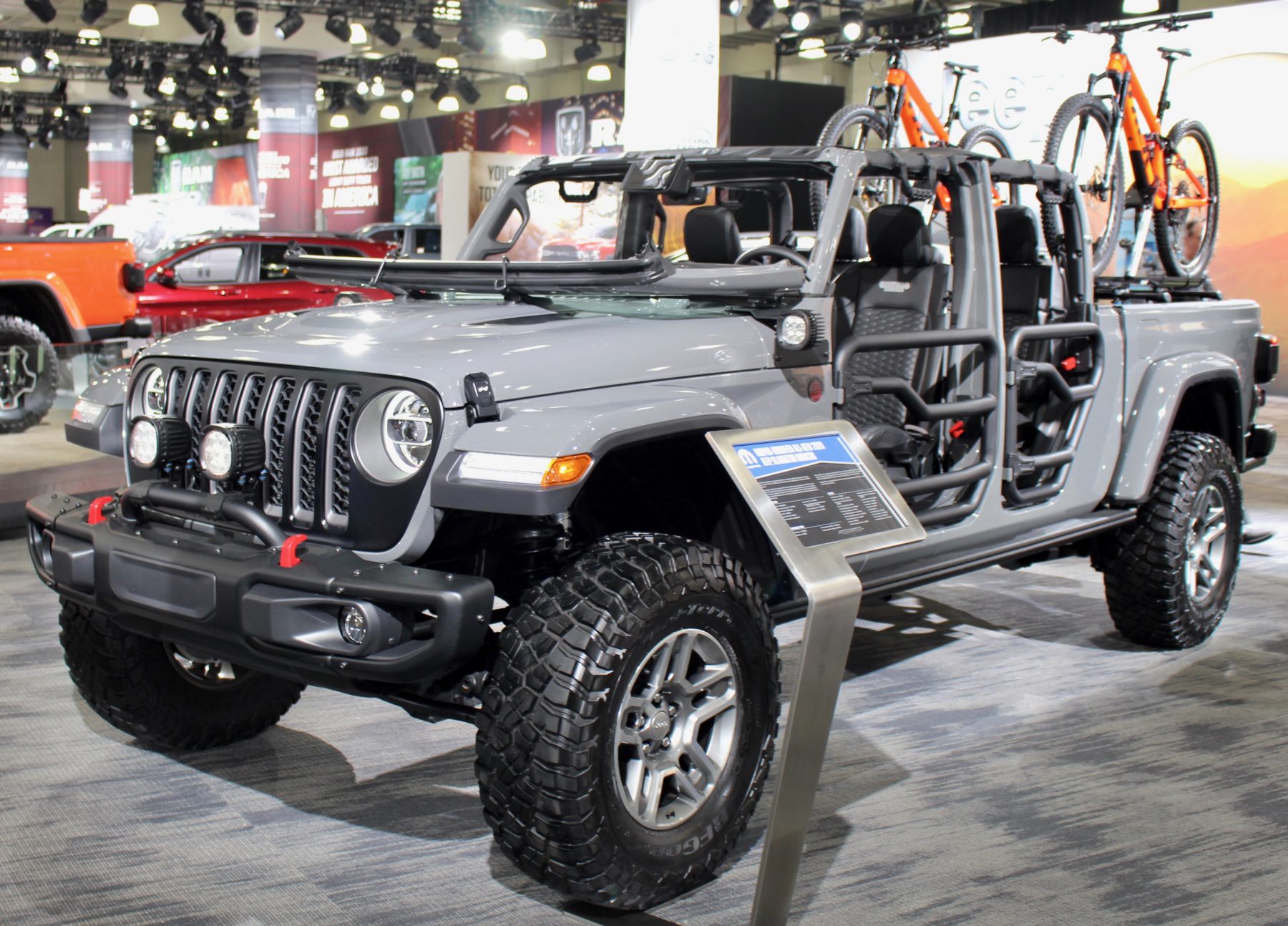 [Disclaimer: Jeep provided the silver Gladiator which I drove to NYC for the NYIAS, for the purpose of this review. Jeep also held a local press event in Boston where I drove the other versions of the Gladiator. Apologies about the picture quality, I had camera issues.]