The Raptor really needs no introduction. If you’re reading this you probably already know everything you wanted to know about its 450-horsepower twin-turbocharged engine, ten-speed transmission, Fox suspension, and huge tires. You’ve read the reviews of it driven off-road and seen Ford’s website where the Raptor races across a desert and jumps over dunes. Even those of you who don’t like pickups probably kind of want a Raptor now.
But let’s get honest for a moment. If you were to buy one, what would you do with it? Would you drive it in the desert? Would you traverse mountain passes? Would you ford streams and power through mud pits?

Most of the time you would be driving it on the highway to your day job. There’s nothing wrong with that, life is what it is and we all have bills to pay. So the question is – how is the Raptor when it’s not driven at 12/10ths across the desert? 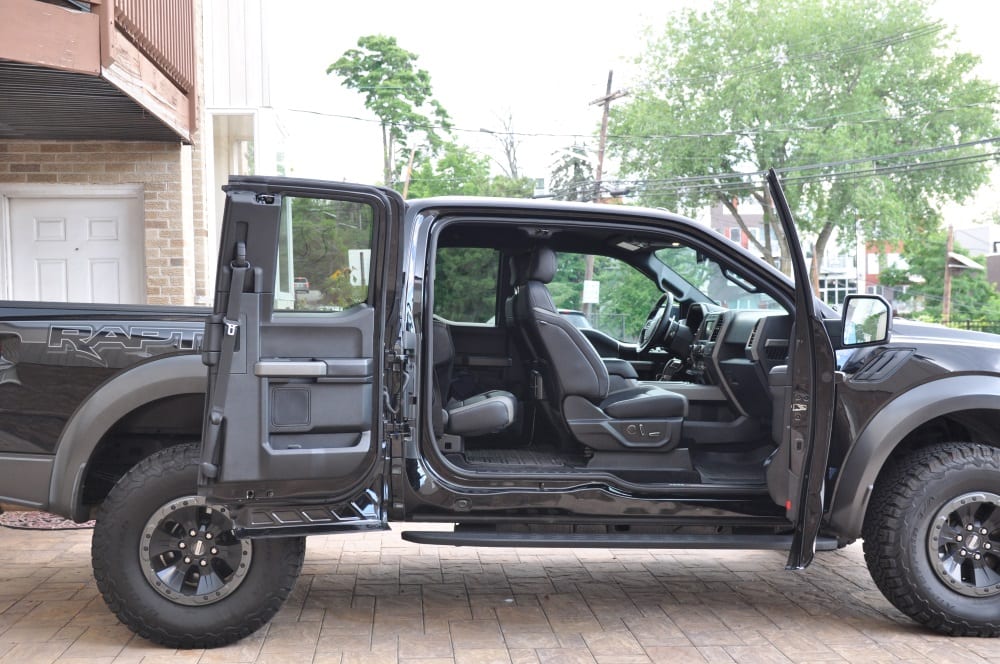 The really big news thing for this Raptor is the engine. In place of a huge naturally breathing V8 there is now a force-fed V6. At 18 pounds of boost, the 3.5-liter twin-turbo EcoBoost makes 450hp at 5000rpm and 510 torques at 3500rpm. This power is then sendt to a new ten-speed automatic transmission. Before it gets to the wheels, this power goes through a two-speed transfer-case. Most of the time it will be sent to the rear wheels but automatic 4WD and full-time 4WD is available in the high gears and full-time 4WD in the low gears.

So, yeah, it’s basically Ford’s latest and greatest stuff in between those frame rails. But there are a few problems here. First, there is the sound – the ’17 Raptor’s V6 is muffled by the turbos, only roaring inorganically when pressured. It occasionally whistles while it works albeit quietly. Then there is the annoying engine start/stop which needs to be disabled with a press of a button or by selecting the sport driving mode.

And you will want to select the sport driving mode because in the normal mode the Raptor feels rather lethargic. It’s not that the throttle response is slow; it’s as if all that power was just limited. It wants to be driven slowly. The ten speed transmission up-shifts at a furious pace – it is in eighth gear at 40mph. It is clearly set-up for fuel efficient driving, which sort of defeats the purpose here. 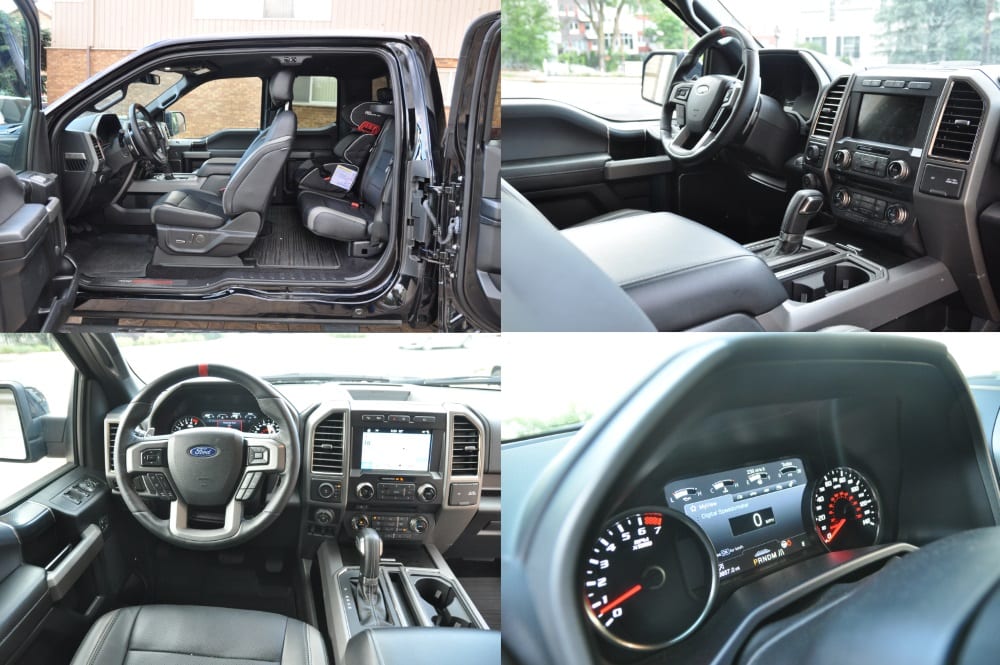 So press the button on the steering wheel and select the sport mode. Unfortunately you’ll need to do this every time you start your Raptor. But this little button changes everything: no more start/stop, throttle actually responds to inputs, and the transmission stays in gear longer and shifts faster, sometimes even a jerking the truck a bit. This is how the engineers intended this thing to run before being forced to dial back for the normal mode. 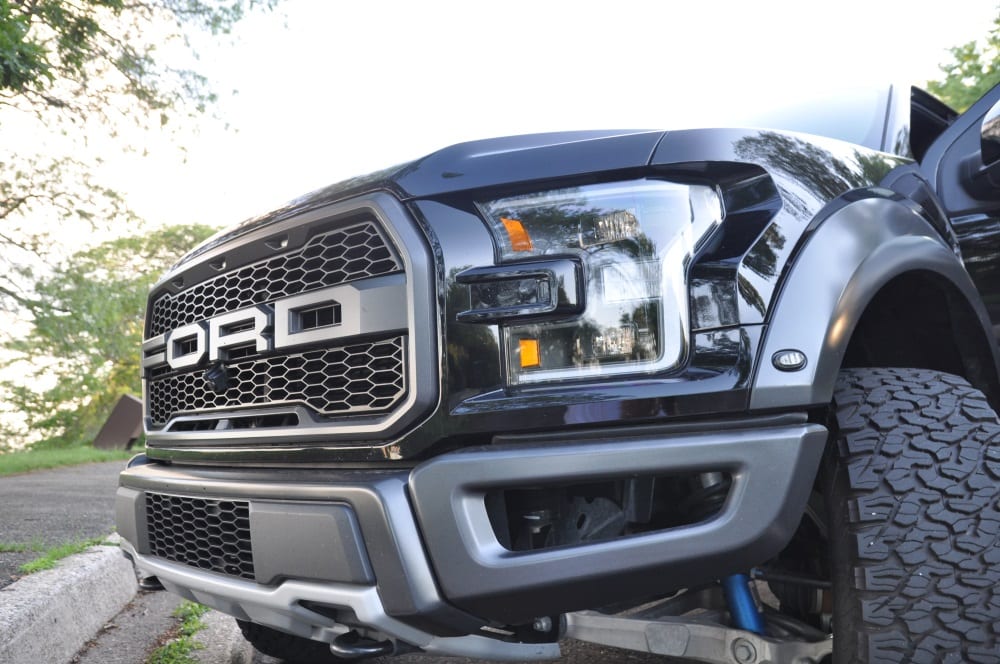 The EPA rated the Raptor SuperCab at 15mpg in the city 18mpg highway. But that’s only if you drive the way your driver’s ed teacher expected you, and in a normal mode. Most enthusiasts, because who else would buy the Raptor, will likely see numbers lower than that. And that’s why despite the perceived increased power and better economy I liked the old V8 better. It was simply more responsive, louder, angrier, and more appropriate for the Raptor.

Around town, with frequent shifting even in sport mode, the Raptor just goes. But where it really shines, which is kind of surprising, is on the highway. Where other off-road focused vehicles compromise highway handling, the Raptor’s true racing design comes out here. For such a large body-on-frame vehicle, the highway dynamics are simply superior. It’s actually kind of scary that a vehicle this big, this heavy (5518 lbs.), this tall, can switch lanes and corner with such ease. 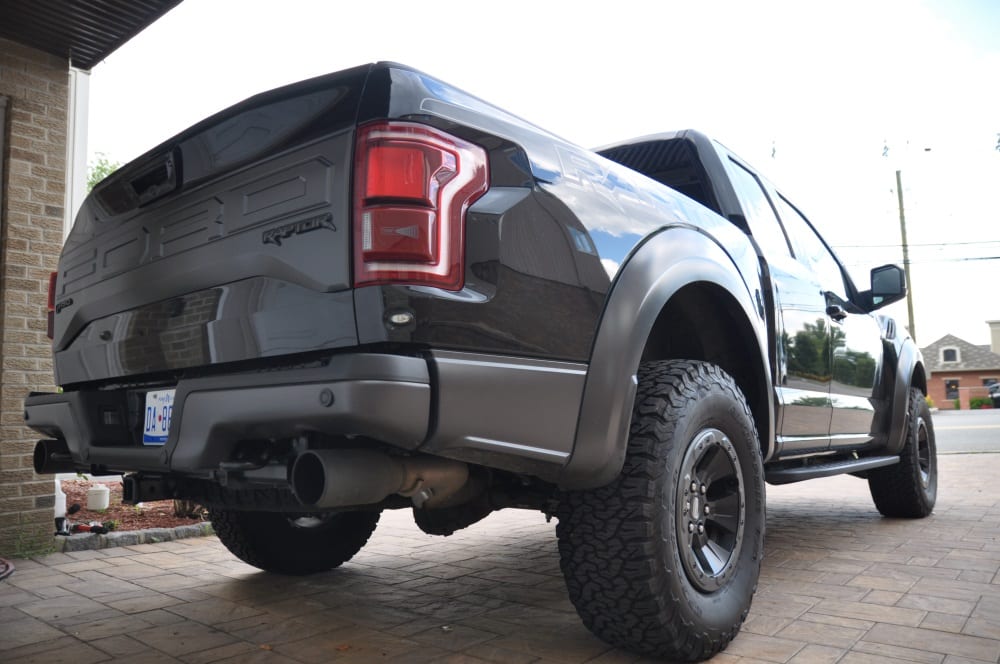 The current generation F-150 always impressed with its cab and the Raptor is no different. The thoughtfulness of the layout, the quality of materials, and abundance of features are really first class. It simply feels luxurious. It has plugs, charging points, lights, cubbies, bins, and a ton of things that simply make life easy. The huge seats are very comfortable and there is a vast amount of room in all directions. Ford has put significant effort into this cab and it shows.

The SuperCrew cab has an abundance of space in the back for three passengers or cargo, with a huge flat load floor when the bottom cushion is raised. This is just one of the many reasons why suburban dads are trading in their sport sedans for F-150s.

While the 2017 F-150 Raptor is available in the SuperCrew version, the vehicle I had was the 12-inch shorter, smaller, SuperCab. It still sits three passengers in the back but none of them, not even the children, will be comfortable. If you plan on transporting any people back there, even kids, I strongly suggest the SuperCrew cab for an extra $2985. If there is something nice to say about the SuperCab is that the rear doors swing open almost 180-degrees. 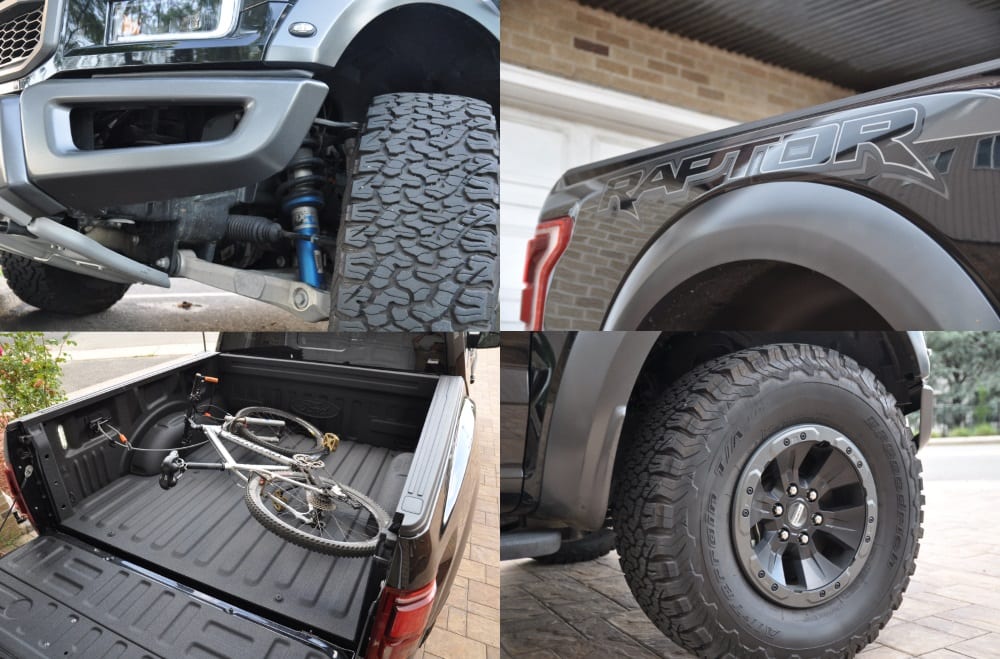 Another benefit of the SuperCrew is increased tow rating and payload. The SuperCab has a 1000lbs payload and 6000 lbs. towing capacity. The SuperCrew has a 1200lbs payload and 8000lbs towing capacity. If these numbers seem slightly low for a full-size pickup truck, it’s because they are. Despite the great handling, the suspension of the Raptor is rather soft, which allows for more axle articulation and wheel travel, which is what’s needed in an off-road truck. If you need a truck with serious load capacity and towing ability, look elsewhere.

And the SuperCrew also gets a bigger, 36-gallon, fuel tank. The SuperCab has a 26-gallon fuel tank. If you’re not hooning too much and you end up with 15mpg, that gives you a maximum cruising range of less than 400 miles. Get the SuperCrew cab, it’s worth every penny. 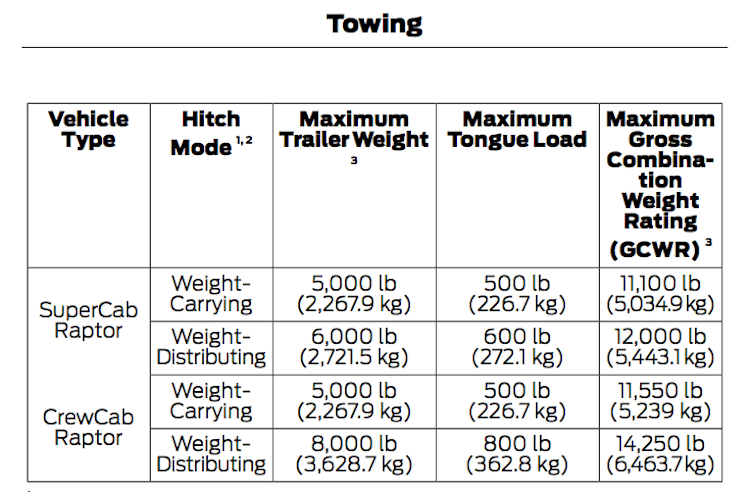 No matter which Raptor cab you choose you get the same bed – 66” inches long and 65” wide, almost a square.  It is 21.4” high which gives it a volume of 52.8 cubic feet. This vehicle was equipped with LED bed lighting which floods it with light from the top of the cab and rear sides. There is also an exterior light near the handle that illuminates the hitch area, which is handy for hitching/unhitching a trailer at night.

The factory sprayed bed had four lockable removable cleats that which Ford calls BoxLink system. The system is basically a set of four plates to which a lockable cleat is attached to. The cleat provides a flexible way of tying down items in the bed. For some reason my test vehicle did not come with a key for those lockable cleats, so I couldn’t remove them. That was not a big deal to me as I only used the cleats to lock my mountain bike to. What shocked me was the fact that I was able to remove the cleats using the key from my coworker’s F-150 that also had the BoxLink system. Why Ford chose not to use regular vehicle specific key for this is beyond me. I’m just glad that some other F-150 owner didn’t steal my bike while I was at the Barrett-Jackson auction. 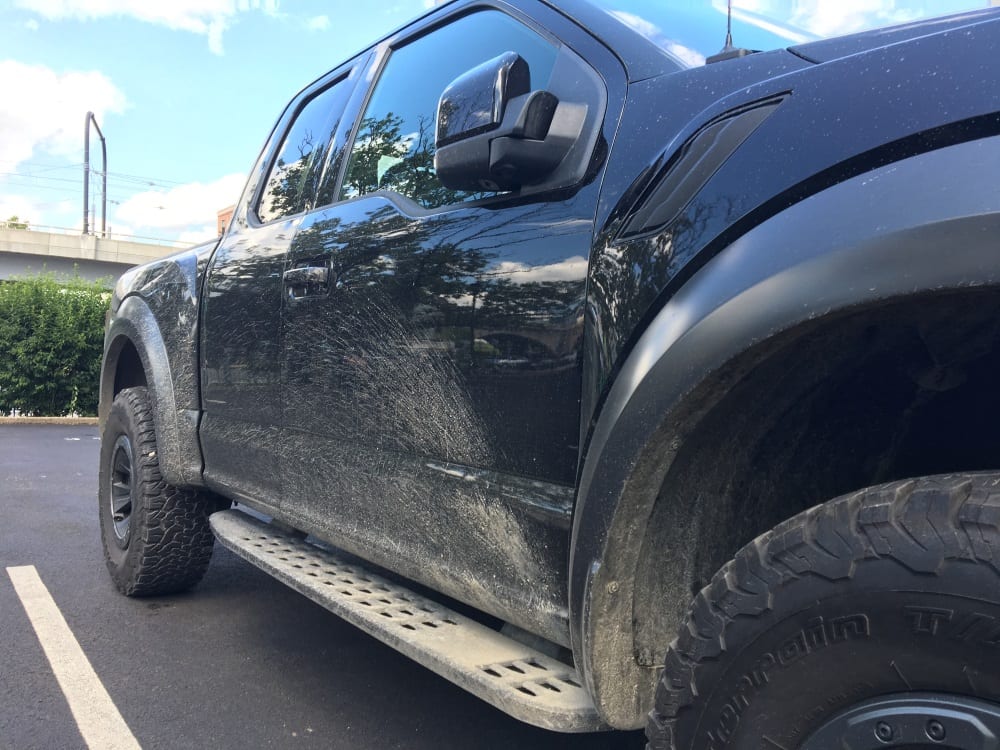 The 2017 Ford F-150 Raptor starts at $49,265. The vehicle in these pictures had the 802A Equipment Group Package (heated/cooled leather seats, SYNC 3, rear sliding window, USB ports, 360-degree camera, box lighting, remote start and a lot more) for $9345. Stand alone options were the $1075 graphic package, $1950 technology package, man step for $375, tailgate appliqué for $495, bead-lockable capable wheels for $1165, and spray-in bedliner for $495. The total manufacturer suggested retail price is $64,420. Shockingly, TrueCar says that currently Raptors are selling above the MSRP.

The Raptor was designed for off-roading. It has all the hardware needed for that and then some. Ford implies desert racing which involves jumping but here is where the water gets murky. This is not a race truck, it’s a street truck. It does not have a super strong safety cage like race trucks do. Search YouTube for Raptor jumps and some cringe worthy videos will show up, so please resists the temptation to do jumps with your Raptor. The Raptor is to a race truck what the Mustang Shelby GT350 is to a GT4 racer.

Rather, the 2017 Ford Raptor is a vehicle that can do it all, albeit with a few compromises, in your daily life. It’s comfortable and luxurious, has plenty of space, it can carry everything, and it can tow things. It will go like hell over any terrain, in any weather, and it will run the quarter mile in thirteen seconds. And it happens to look bad-ass. It is almost everything to almost everyone.

[Disclaimer: Ford Motor Corporation provided the vehicle for the purpose of this review. All images copyright Kamil Kaluski/Hooniverse 2017]