I Replaced My Recalled Takata Airbag, You Should Too

Any letter in the mail with “Saab” written as the return address will surely raise an eyebrow. Three will make you alert.

This was the third “URGENT TAKATA AIRBAG SAFETY RECALL” notice bearing. Stubbornly rolling my eyes, I plugged in my 9-2x’s VIN on the NHTSA’s website to double-check. My car was in fact, stricken by Takata.

The killer isn’t the airbag but the inflator that corrodes and rusts over the lifespan of a vehicle. For passenger-side airbags its a metal canister about the size of a Coke bottle, where as for a steering wheel air bag, a compact square piece. When the inflator completely deteriorates it explodes during an airbag inflation, sending sharp, high-speed projectiles towards the occupant, slicing through the soft airbag. That is absolutely, absolutely terrifying.

“The combination of time, temperature fluctuations, and humidity contribute to the breakdown of the PSAN propellant in the inflators. This breakdown can cause the propellant to burn too quickly, which creates more pressure than the inflator can withstand. In extreme cases, this causes the inflator to explode and send shrapnel through the air bag toward vehicle occupants.” -NHTSA’s initial report

The severity of this problem is getting more worse day after day, as Takata airbags are found on everything from Toyota Corollas to Rolls-Royce Phantoms. Nearly 37 million vehicles from nearly every manufacturer have 50 million at-risk airbags affected by this recall. After coming to spotlight in 2016, that number keeps rising with new recalls being discovered and issued almost daily.  Just ten days after the start of 2019, 782,384 Ford, Mercury, and Lincoln vehicles were recalled.

To date 16 people have been killed here in the United States, and 24 worldwide by shrapnel upon airbag deployment in a crash. 200 people have also been injured. As the percentage of plagued automobiles continues to grow, I wouldn’t be surprised if those number rise.

14 out of the 16 deaths linked to these faulty airbag inflators were in older 2001-2003 Hondas and Acuras. At the end of March a 55-year-old Arizona man was killed by shrapnel when his 2002 Honda Civic crashed. 2006 model year Ford Rangers and Mazda B-Series pickups are also the most prone, per the NHTSA’s findings.

With 229,000 miles on my original airbags, I was done hesitating and took my 2005 9-2x as directed to O’Reilly Motorcars in downtown Milwaukee.

Pulling towards the cream brick building, a garage door slowly rolled upwards revealing a shop scattered with Saabs, Volvos, Porsches and BMWs. Entering the shop, I looked over at a black Range Rover parked alone next to a wall that had smoked up the shop a few hours before I arrived. The service writer rolled his eyes when asked about it. 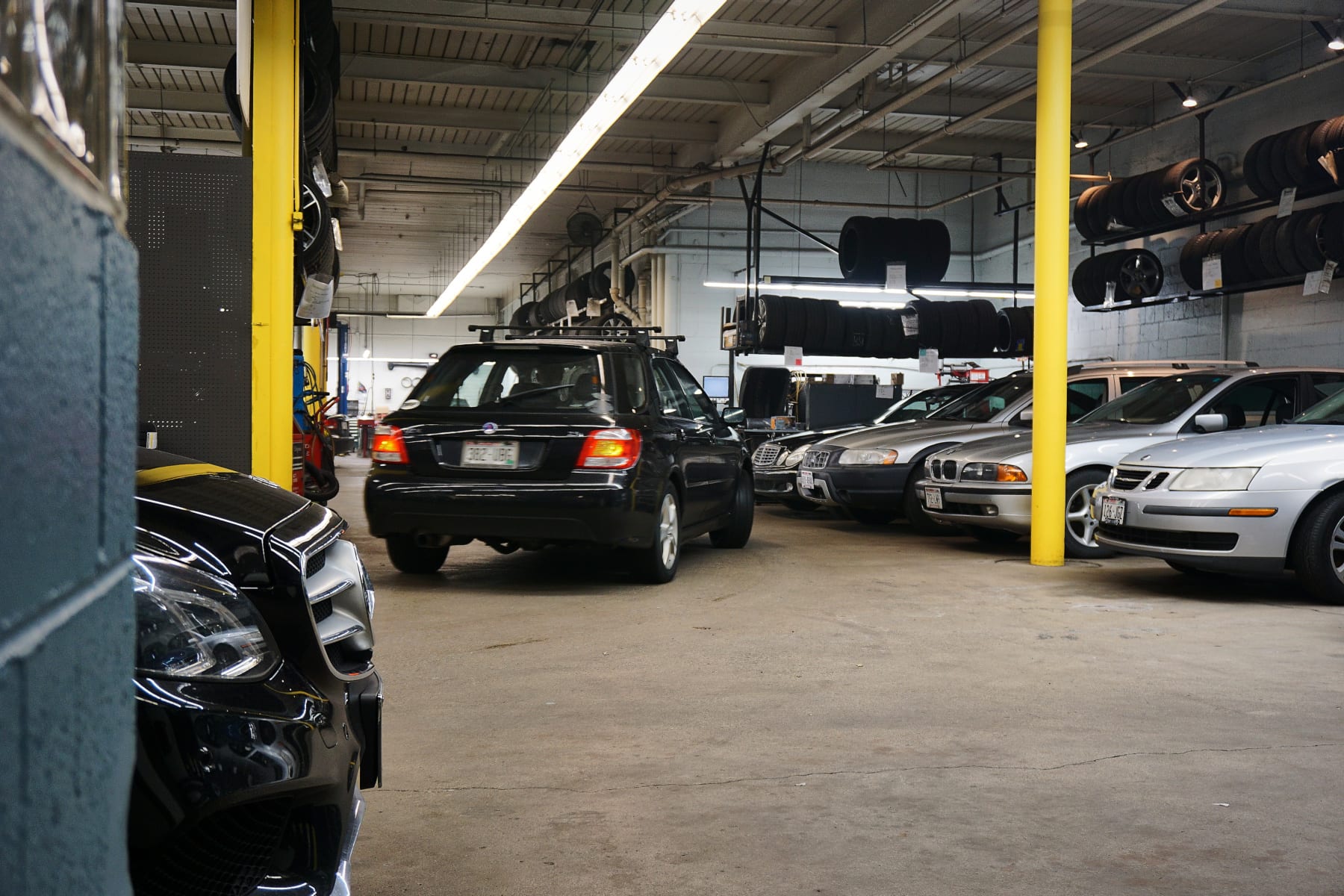 Per the letter, O’Reilly is the only authorized Saab dealership in Southeast Wisconsin to have this recall fixed. When the time a third notice landed in my mailbox, the instructions were revised indicating that any General Motors dealership would perform the fix.

I handed my keys to a tech and my black wagon scurried its way around a corner to a far rack in the back of the shop, passing a row of 9-5s and 9-3s. Sitting down on an overstuffed leather couch I sipped from a styrofoam cup of coffee and watched. 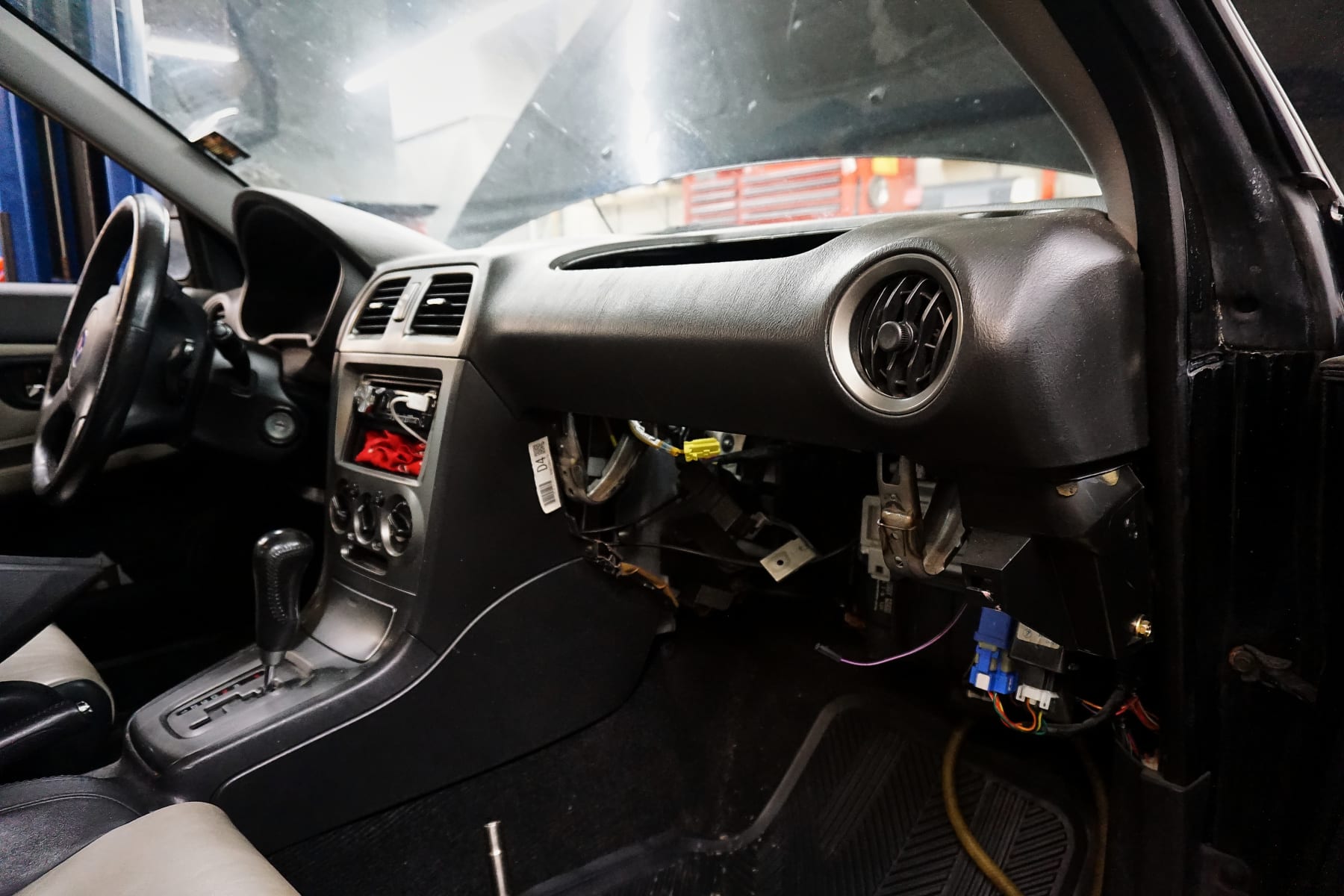 The repair times vary. A steering wheel airbag in my friend’s 2013 Ford Mustang Boss 302 was fixed in under thirty minutes. Replacing the faulty inflator for the passenger side airbag buried in my 9-2x’s dashboard took two hours, but graciously included a full vehicle inspection afterwards. As expected, I have oil leaking slightly from the heads.

Accessing the recalled airbag was quite a more laborious task than I had expected. The entire glove box and lower kick panel are deconstructed to remove the recalled passenger airbag from the top of the dashboard. 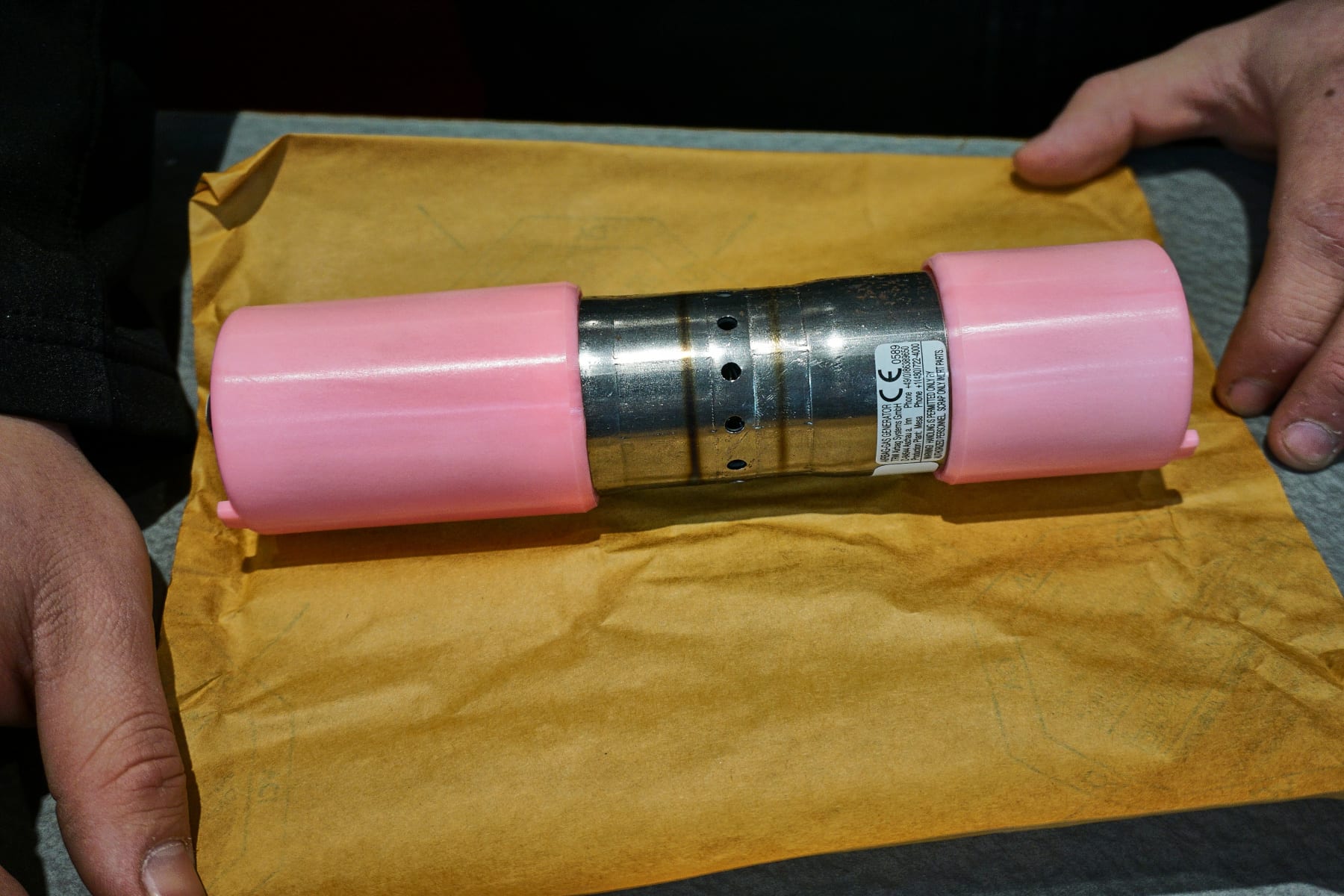 Once out of the car, the airbag was brought to a homemade stand on a workbench nearby, where the mechanic showed me the faulty inflator, essentially a bomb, visibly corroded from prolonged exposure to moisture and Wisconsin’s obnoxious temperature shifts. He then detached it from the airbag and pulled out the fresh, shiny replacement canister with pink caps on either end to show me before bolting it back in. 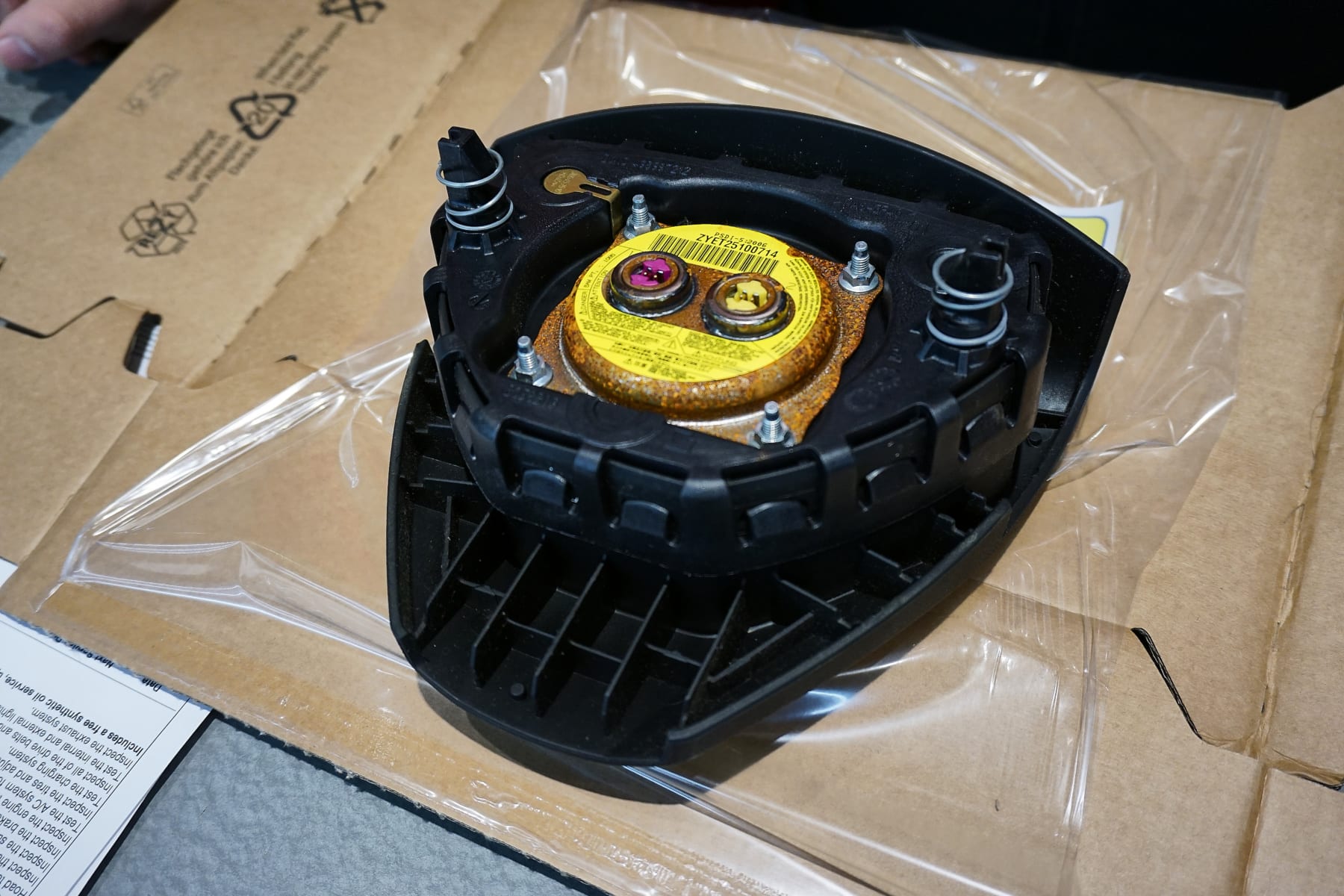 Behind the service counter sat a pallet with tall stack of recalled airbags taken out of various Saabs. Usually only the inflator is replaced, like in my case. Other times the entire steering wheel center piece, including the plastic cover with the emblem, airbag, and square inflator behind it.

To date O’Reilly Motorcars has replaced  inflators in 345 9-3s and 9-5s, plus ones from 350 other vehicles in the greater Milwaukee area.

It’s been a crapshoot luring people in since several of these infected cars are older. Many have traded hands multiple times too. For OEMs and dealerships, this makes pinpointing the current owner almost impossible to track down.

I received three notices over the course of a year, and the longer I waited the higher the incentive grew. First a $25 prepaid Visa card, then upgraded to $50. Redemption was easy, I logged my VIN number and date of service onto the website listed on the mailer.

But really, this isn’t about money, it’s about you and your occupants’ safety. The peace of mind of knowing actual working airbags will deploy in a crash trumps any monetary compensation offered by a dealer or manufacturer.

Well if you have a 2001-2003 Honda, stop driving it immediately if your airbag recall was not performed.

For all other vehicles, even if you haven’t received a notice from, please go online and determine if your car is on the list. Just because you checked eight months ago, doesn’t mean you’re invincible now. Like I said earlier, new Takata recalls arrive almost daily.

You really have no excuse, because with every vehicle recall, the service and replacement is entirely free.

By day, Robby DeGraff is an industry analyst for an automotive market research and product-consulting firm. Based an hour from Road America in Wisconsin, he once piloted a Suzuki Jimny around Iceland for two weeks alone. Robby's personal fleet includes a bright red 2001 Chevrolet Camaro that sometimes runs, his second Saabaru wagon, and hopefully a Volkswagen Vanagon in the future.