It’s early March and there is no better time than now to discuss the safety of ski transport in a vehicle. The issue with skis is that they are long, strong, and relatively heavy objects. Those of us that ski don’t give much thought on transporting our skis: some fold the rear seats and throw them inside, others attach them to roof rack, and others still throw them inside a roof-top cargo box. But none of us really ask ourselves what happens to these long, strong, and heavy boards in an accident. The answer is obvious – they become flying projectiles – long, strong, sharp, and heavy flying projectiles. Combine that with some heavy boots, poles, and bags and things get dicey in an accident.

Sometime ago German ADAC performed a test of what happens to your ski equipment in a frontal accident. Their findings were not pretty, as seen in the below video. But there is a relatively simple solution – secure your gear to keep from possibly decapitating you or the occupants of your vehicle.

Securing skis inside the vehicle may not always be easy, especially with multiples sets of skis or snowboards. Some automakers, mostly European brands, offer a ski-bag that is attached to the center pass-thru in the rear seat. This bag protects your interior from your sharp and possibly wet skis and also includes a strap to secure them. But they are somewhat small and fitting more than one pair of skis or a single snowboard can be a challenge.

Most importantly, what the video does not discuss is a rear-end impact on a vehicle that is transporting skis. In a severe rear-end impact, vehicle crumple zones absorb the energy of the impact. But what happens when long, heavy, strong, non-bendable objects stretch from the end of the crumple zone to the back of the front passenger seat? I don’t even want to think about what could happen to the occupant of that seat. 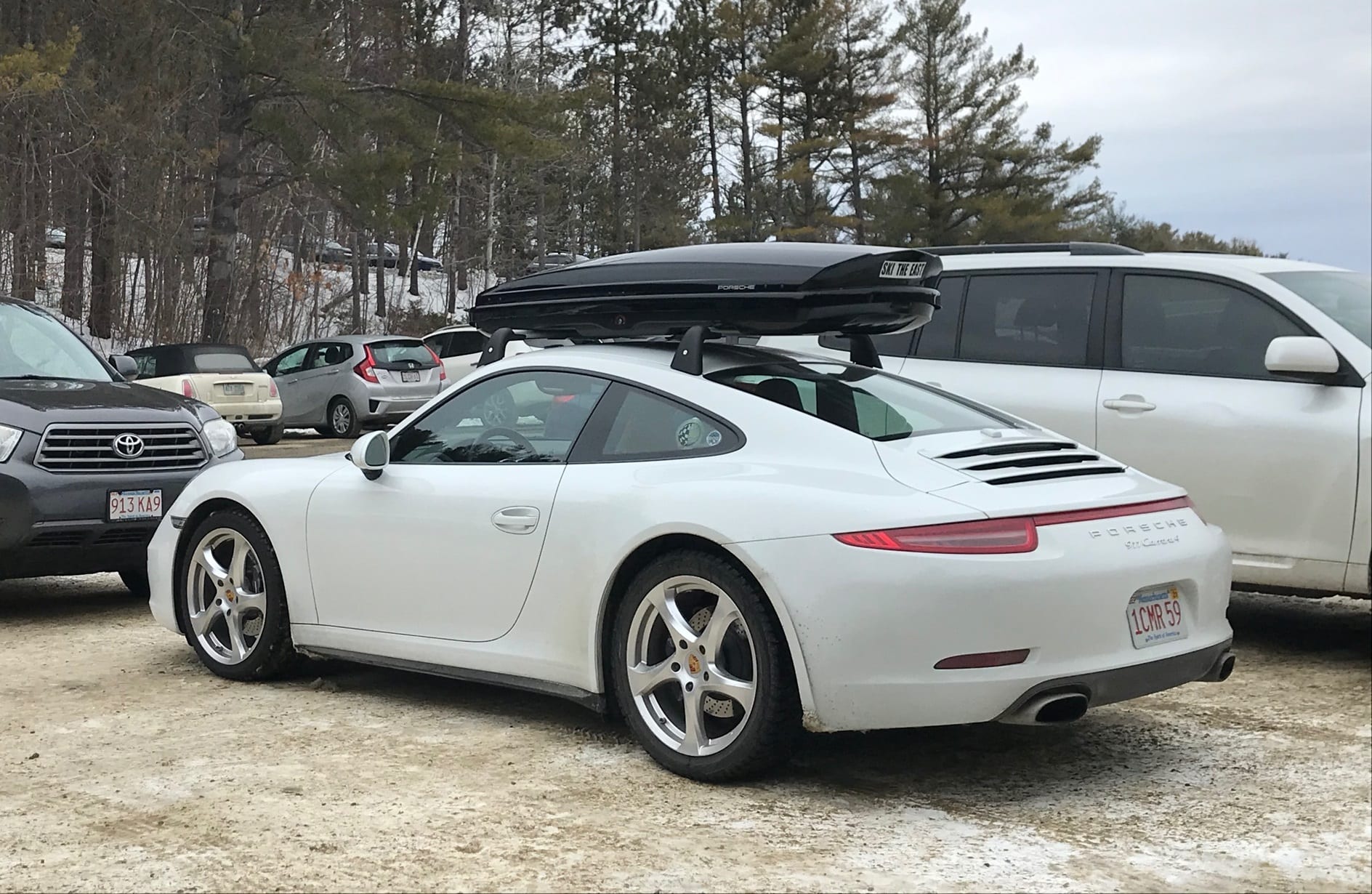 Securing skis and snowboards to the roof, therefore, seems the best option. It literally removes the potentially dangerous equipment from inside the vehicle. But roof transport has its issues as well. I’ve used Thule and Yakima roof-top cargo boxes with great results. Like most people, I threw the family’s skis and poles in there, closed the lid, locked it, and off we went. What I didn’t realize was that just because my skis were out of sight and out of mind, that they were necessarily safely transported.

The below video tests several European-market cargo boxes. Their video shows that in some cases the skis penetrated the box and were almost vomited out of the cargo box forward. This is obviously dangerous for whoever is in front of the vehicle – getting hit with flying skis probably isn’t fun. But as was the case with interior transport, securing the equipment is the key. All cargo boxes that I have seen have had straps and/or tie-down points inside. After watching the below video I know I will be strapping down everything, and then checking it while musing “this isn’t going anywhere”.

What about cargo boxes?

Cargo boxes are not the greatest solution for everyone. When on a vehicle they drop the gas mileage down a bit and increase vehicle height, which is important for those who park in garages. When removed from a vehicle they take up a lot of space. But a secondary benefit is that they can be used for a lot more than just winter sports.

In the end, the conventional clamping ski attachments may be just the best solution to transport skis and snowboards. They place the equipment outside of the vehicle and proper securing is mandatory just to drive. When removed they don’t take up a ton of space. Basic racks also cost less to buy. They attach to typical cross-bars, OEM or aftermarket, and those cross-bars can be used for other attachments when the weather is warm.

Whatever the cargo or the means of transporting it, the key is to properly secure all bulky cargo. Whether it is inside or outside your vehicle, unsecured cargo can cause major damage or additional pain in an even of an accident. It helps to drive more cautiously while transporting bulky stuff, too. 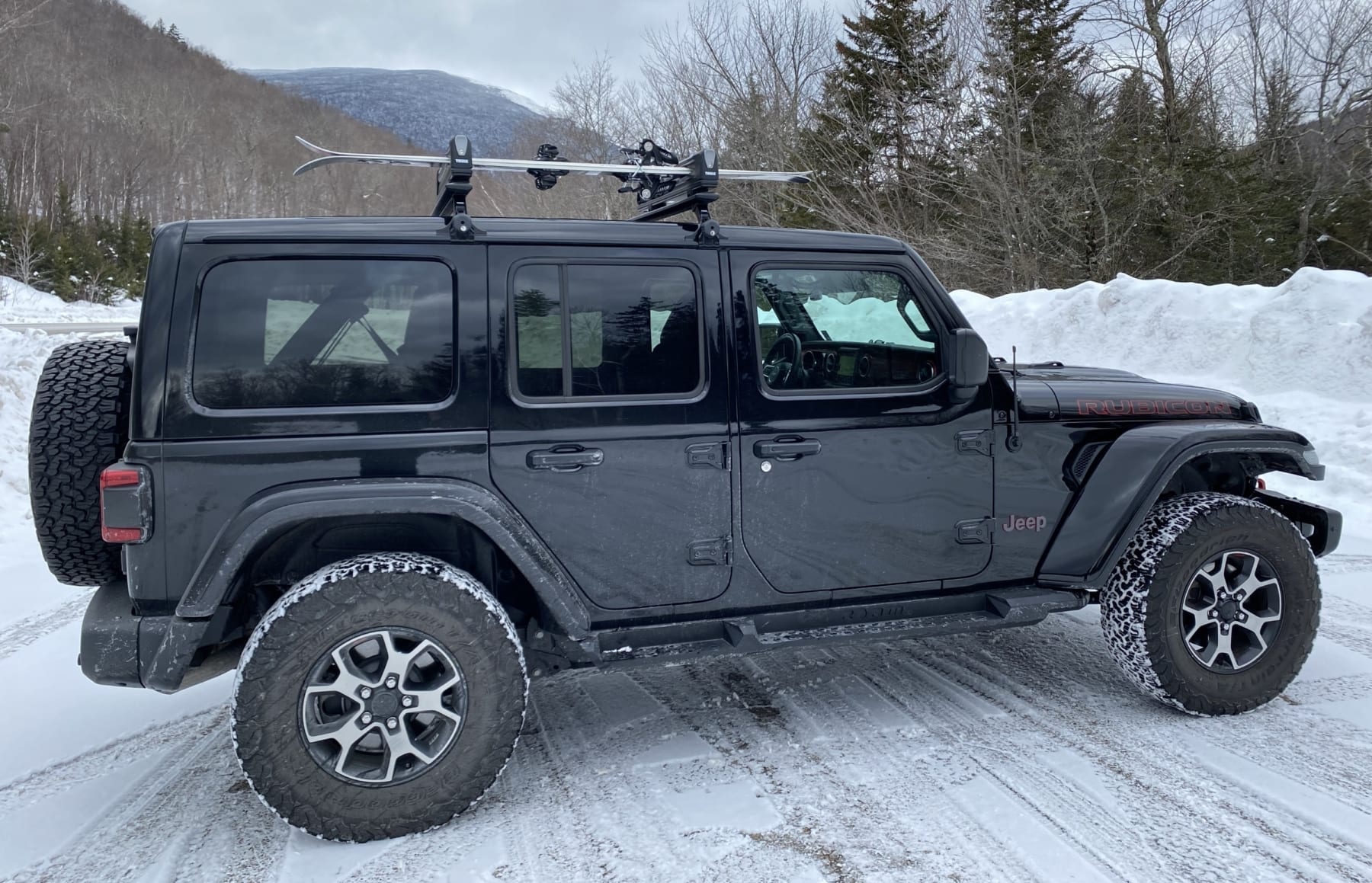