I always had the thought in my mind that, “Hey, that SRT-6 Crossfire? That’s like the working man’s E46 M3! I should make a post comparing them!”

This all seemed like a lovely idea, so I started doing my research and it all looked great. It’s truly strange how similar the two cars are on paper.

So get the Crossfire?

I was all fired up. How has nobody discovered this secret M3? The Crossfire is even made on the SL platform, and has a Mercedes engine. Its underpinnings are sophisticated and European. It has a much shorter wheelbase–more than a foot shorter. It’s gotta be a hoot to drive. I was blazing through research, inches from my computer monitor.

I could see my face on Time magazine, I could imagine the photo; me and orange man, shaking hands at the White House. I was getting ready to write my magnum opus.

My Golden Globes acceptance speech–for the film adaption of my article–titled; “Caught in the Crossfire” was being drafted. I could hear Ricky Gervais:

I would get an expensive three piece suit and walk down to my neighbor’s house, where a practically mint metallic purple Cavalier coupe is parked.

“My good man, for your Cavalier. Will this be sufficient?”

I would then present the contents of a suitcase, revealing four crisp one-hundred dollar bills, carefully affixed to case’s red felt floor.

Then, I noticed four things:

Well, there goes that article! Who even thought that was a good idea in the first place?

The Crossfire was born of the strange (strange and doomed) 1998 merger of Chrysler and Daimler Benz. Its platform is based heavily on the first-gen SLK roadster, but total Mercedes parts are only something like 40%. It’s not quite just a re-bodied version of that car. Production started in 2004, and then a year later the next generation SLK was released on a completely new platform. The Crossfire did not receive this platform, nor a second generation. So technically, Daimler-Chrysler was kinda making two generations of SLK roadster at the same time.

It was styled after a concept car also called the Crossfire. The looks of the concept were controversial, as were the production car’s. The Crossfire coupe (it was also available in a convertible) was particularly polarizing, with Jeremy Clarkson saying it looked like a dog relieving itself. This, to me, is just a typical Clarksonian exaggeration.

The Brief Foray into the Forums

I was looking for the exact quotation from Mr. Clarkson and stumbled upon a strange ‘crossfireforum.org’ post from 2009. A forum member, known as “Mr. Burns” or “Monty”, was very upset by the Top Gear presenter’s unkind words. He was upset enough to consider making a satirical version of the review, where he played a mocking version of Jeremy called “Germy Clarksville”. Mr. Burns claimed to be a professional actor, insisted he had studied Clarkson “extensively”, and would of course don the proper attire.

Other members of the Crossfire forum were very receptive to this. One reminded Mr. Burns to include Jeremy’s less than perfect teeth in the costume. Another user, known only as “s40guy”, also supported the idea, encouraging Monty with a simple “Definately”. 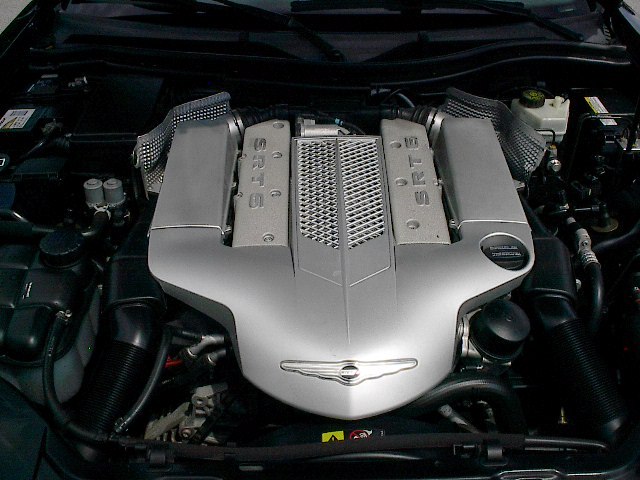 I touched on the Crossfire’s specs earlier, but it’s worth going into a little more detail. The Crossfire came in two engine trims; the base car and the SRT-6. Both trims got versions the M112 V6 engine. The M112 may at first glance seem pretty boring , but actually it’s a little strange.

The base car’s engine is the ‘E32’ variant of the M112, while the SRT-6’s motor is the ‘E32 ML’. Both are 90°, 3.2 liter V6s. Both of them have forged steel connecting rods, three valves per cylinder, and single overhead cams. The M112 is also a “twin spark” motor, meaning each cylinder gets two spark plugs. The difference between the ‘E32’ and ‘E32 ML’ is in the performance, which is determined by the two engines respective induction methods.

The ‘E32’ M112 is naturally aspirated. Air enters the motor through a magnesium (I know to save weight, but why magnesium?) variable length intake manifold. It makes 215 horsepower and 229 lb-ft in the Crossfire. A 6-speed stick is available with this motor. 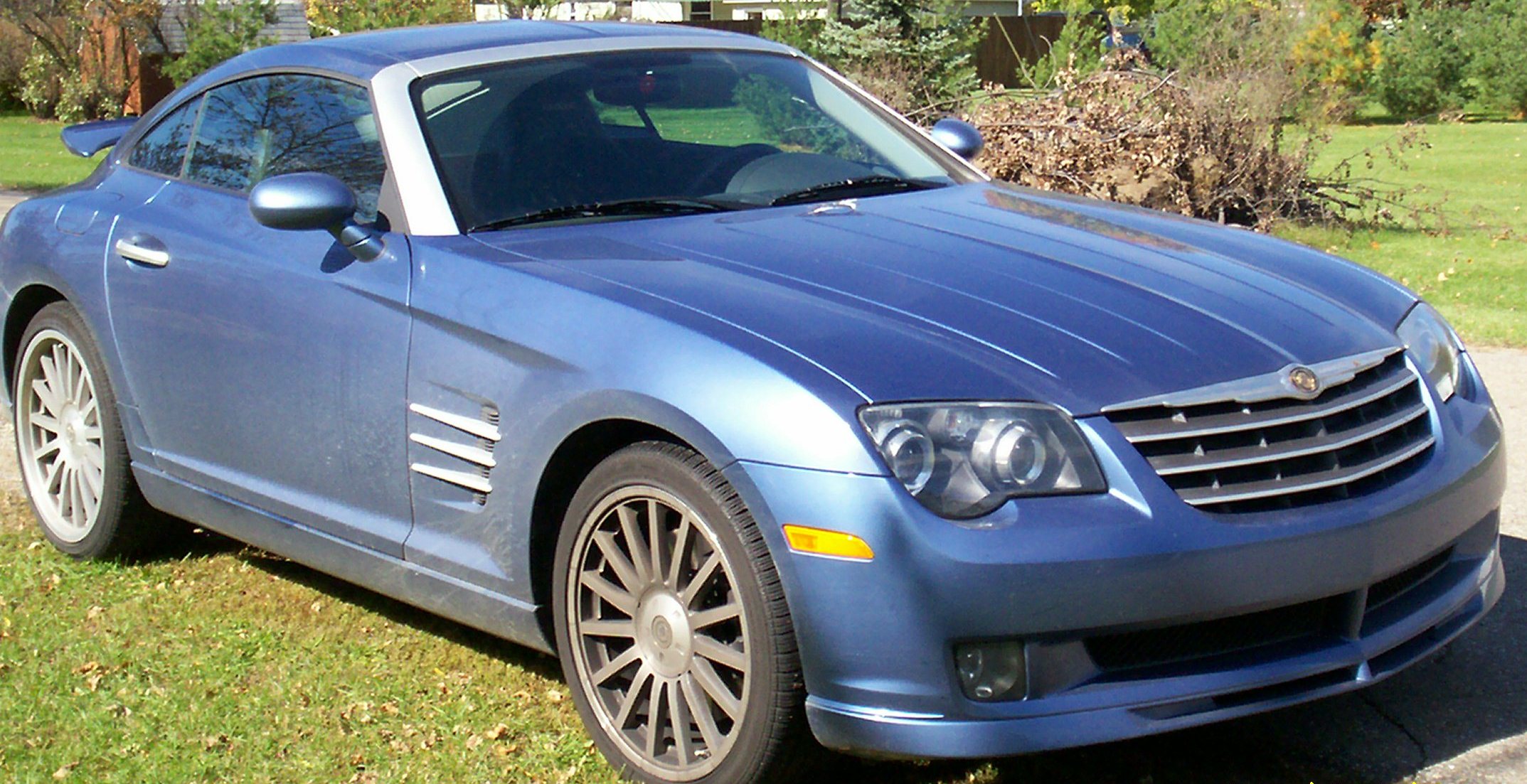 The SRT-6 gets the ‘E32 ML’ M112, which is supercharged. It gets a twin-screw blower in combination with a water-air intercooler. Peak power is 330 horsepower, over a hundred more than the base E32. Torque in this version is 310 lb-ft. The only transmission offered with this engine was a 5-speed automatic.

The SRT-6 trim was offered on both the coupe and convertible versions of the car. Besides the new engine, it got new front & rear fascias, a big boy spoiler, and new wheels & tires. The wheels are 18s in the front, 19s in the back (a weird pre-bailout trend that I understand but am still confused by.)

This car does not get a spare tire, probably because there’s nowhere to put it. You just get that shitty little can of fizzy ranch dressing that apparently magically fixes tires (unless the puncture in your tire has a larger diameter than a human hair). Also, for some reason you still get a jack. What a joke.

On the topic of things about this car that suck,

It has recirculating ball steering. What is it, a bus? Don’t worry, if your steering decides to pack up just swipe some parts from a nearby cement truck. Why would they do that? Even Ford was like, “Wow, we still have recirculating ball steering in the Crown Victora? That’s fucked up!” and replaced it with an actual rack and pinion. There were carriages on the Oregon trail with more sophisticated steering.

The ride is apparently not great either. This is despite the car having double wishbones up front and multi-link out back. It isn’t lacking in sophistication, just tuning.

Apparently a lot of the upgraded equipment for the SRT was taken right off of the SLK32 AMG. In fact, the exact same drivetrain is offered in the SLK32 AMG. I guess they just had a big bin of all of these AMG parts and nailed them to the Crossfire without changing them.

The real kicker is that it’s automatic only, but if you’ve been reading carefully you may have come to the same conclusion I did while researching.

Are you thinking what I’m thinking?

Why not just manual swap one of these cars? A manual transmission is offered on the same motor! Well, as it turns out it isn’t that simple.

There’s an extremely long and ancient build thread about somebody who wanted to do this on crossfireforum.com. He eventually did, but it was a big pain in the ass. Apparently you need to modify the end of the crankshaft to do it (among other things). If you really wanna read all of it, be my guest.

So what’s the point?

You may have read this and thought two things.

In fact, both of these things are true. Magazine reviews from the time either say it’s not great, or they come to basically no conclusion. The case for buying this car seems pretty weak then, right?

I got 2500 things that may change your mind:

To be fair, most of these cars on the lower end go for around $7k-$9k, but this one is dirt cheap. I’m not Mr. Moneybags or anything, but I do have this much money from my paltry college side-jobs in savings. I could technically go buy this car right now. It could be mine. Such a strange feeling.

To me, that’s really the appeal.

It may not be as good as the M3, but it’s so close on paper. Really, how bad can it be? This thing probably hauls ass, it really doesn’t look half bad (especially the convertible), and it has a twin-screw supercharger. Imagine the completely dumbfounded WRX owners you will inevitably race on the highway.

I talked to Zack Klapman (the man driving in that video), and he said that although it definitely wasn’t great, it was “fun for fun’s sake”. (To be fair, the one in the video was modified, but it’s still an automatic Chrysler Crossfire.)

This car may not be some SECRET and AMAZING performance bargain (do those even exist?), but it is still a cool car. E46 M3 prices keep getting higher, and I don’t see this car appreciating any time soon. It may not have been the working man’s M3 when it was new, but oh boy it is now.