I love the Mountain West portion of the United States. It is hardcoded into my brain from a trip I took with my father and stepmother in the summer before I turned seven. We did Mount Rushmore, the Badlands, the Grand Tetons, Yellowstone, and Pikes Peak over a two week period. While sunshine, warm weather, and ocean breezes are great and I do enjoy them, nothing is more restorative for me than deep blue skies and snow covered mountains.

As 2018 closed out I had this need to see the mountains again, so when the invitation came from Honda to drive their all-new Passport in Moab, I couldn’t say yes fast enough. Moab is one of those places I’ve had on my personal “NEED to go” list for quite some time, and that choice of location had me interested to see just how capable this Honda would be.

When most people think of Moab, they think of hardcore Jeep trails. And while there are plenty of those, there are also miles and miles of trails that range from what I would call “fire roads” to moderate off-roading.

Why does it exist? 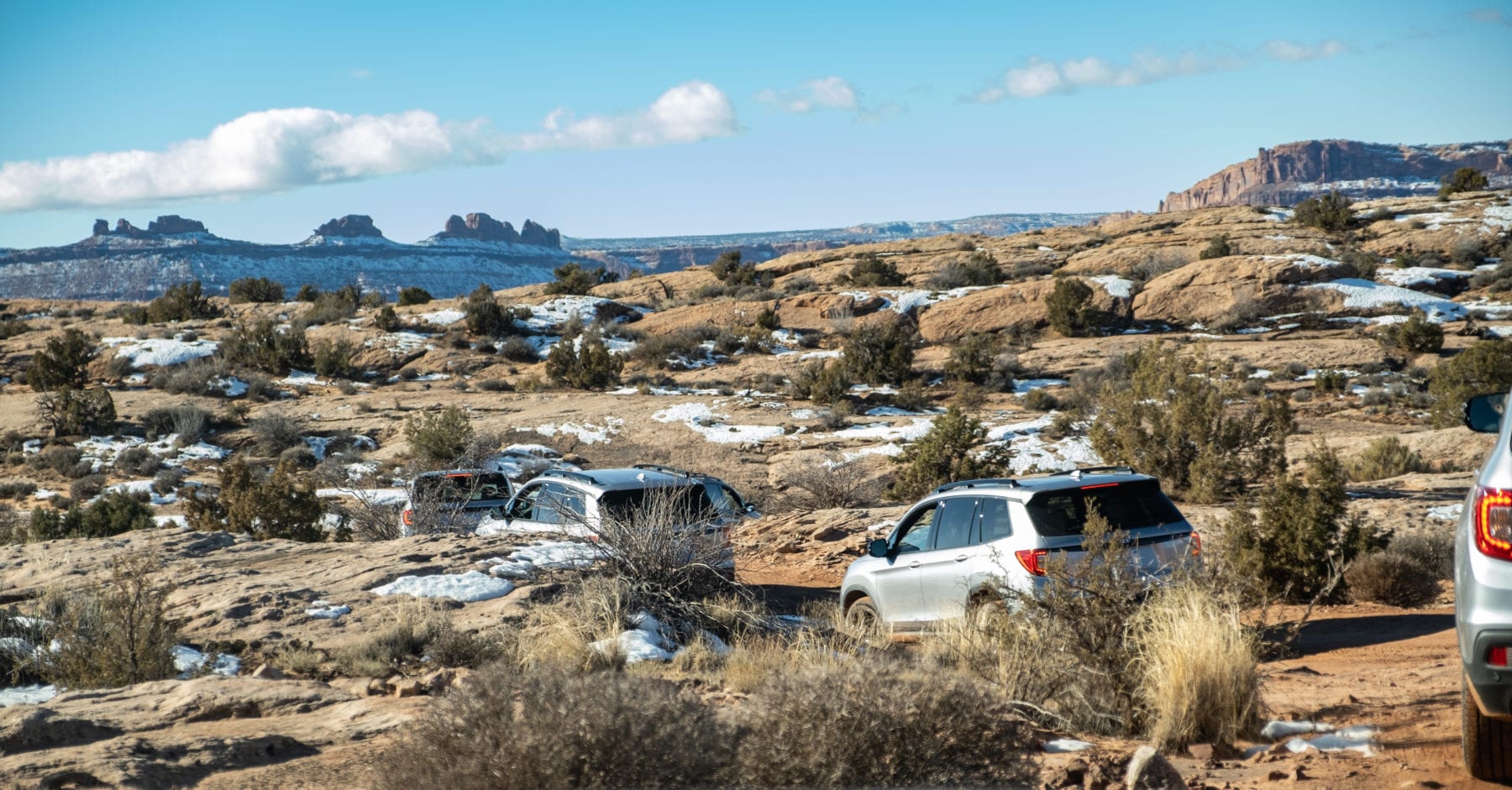 The Passport’s raison d’être is a hole in Honda’s crossover lineup. According to Honda, their data showed that they were losing some 35,000+ sales a year because they didn’t have a vehicle that slotted in between the CR-V and the Pilot. This market segment includes the likes of the Ford Edge, Toyota 4Runner, Jeep Grand Cherokee, Chevy Blazer, and Nissan Murano. A slightly larger five-passenger CUV/SUV that has varying abilities off road and on road.

Honda’s goal with the Passport was to have legitimate off-road chops but not at the sacrifice of on-road manners. The 4Runner and the Grand Cherokee are more capable off-road but have tradeoffs for everyday commuting. 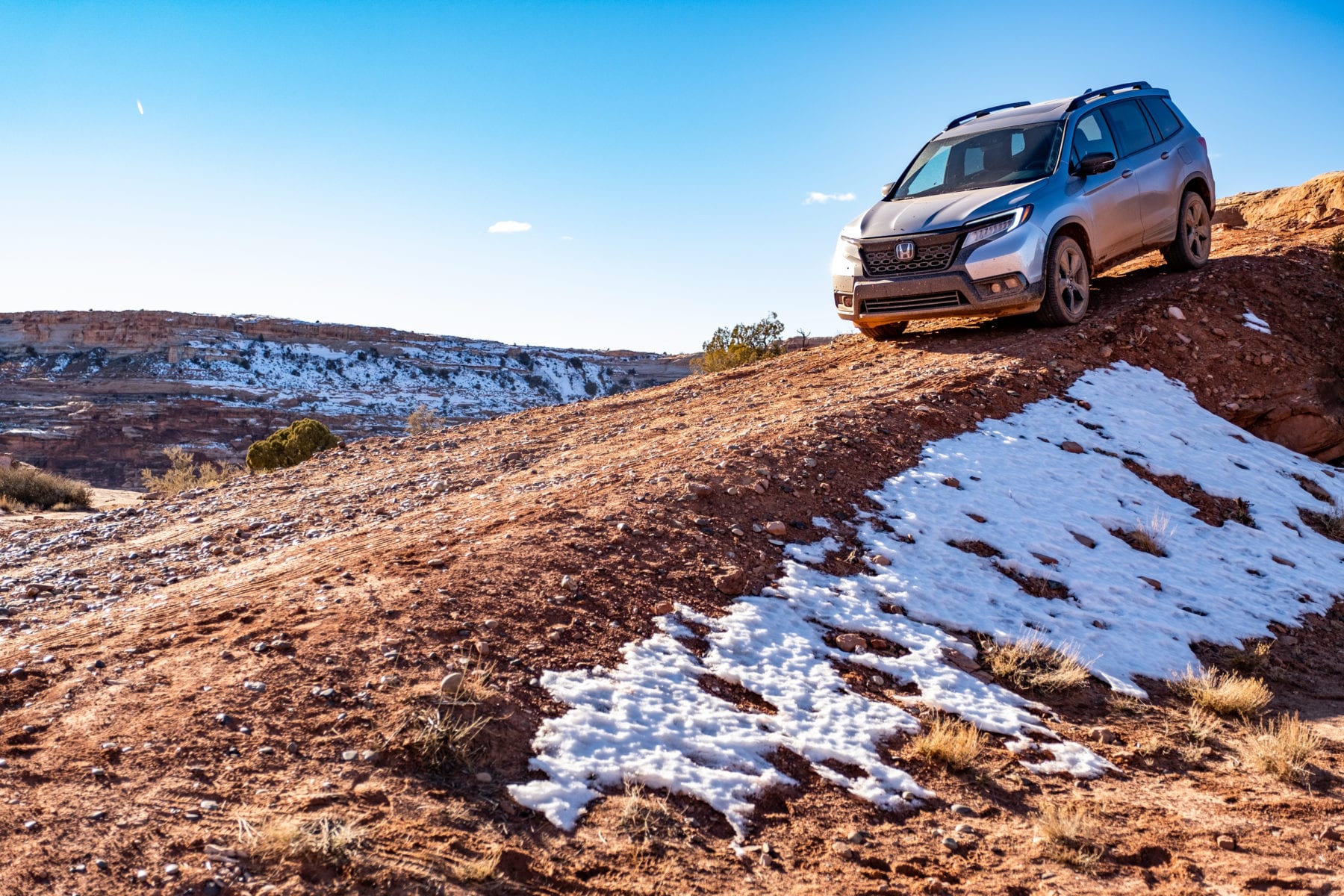 The drive route planned for the event had plenty of off-road trails to see that the Passport is no soft roader or mall crawler; it can handle the dirt just fine, even at good speeds.

OK, yes, would I have preferred it to have an extra inch or two of travel and different valving on the shocks? You bet. A set of BFGoodrich K02s would have been great as well. While the Passport didn’t have any of that, however, it did just fine with its standard 20-inch wheel and tire set up.

Putting power to the ground 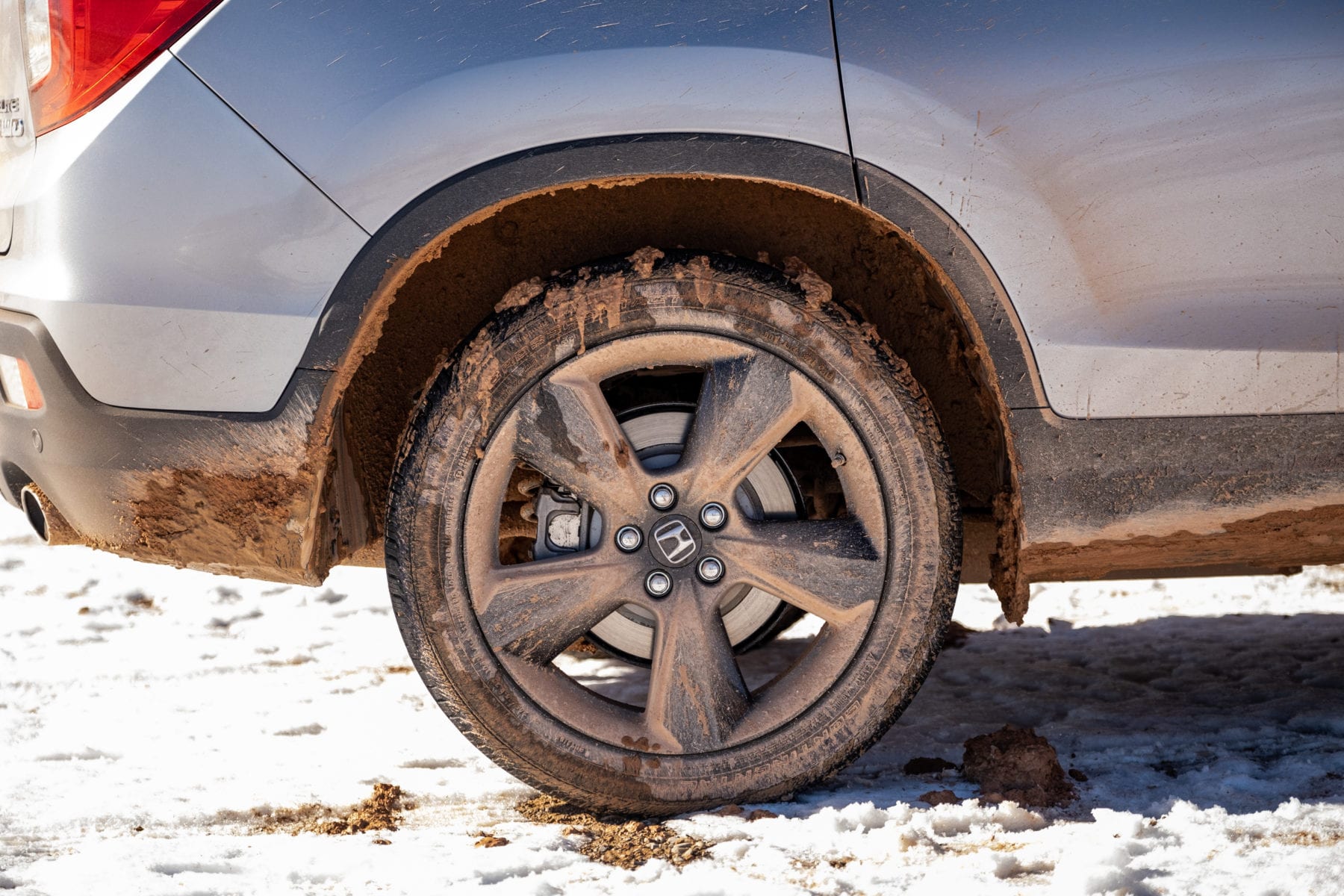 The Passport comes with Honda’s i-VTM4 all-wheel-drive system that can vector 70% of the power to the rear wheels. Honda made the point in their presentation to say this was real torque vectoring and didn’t use the brakes to manage traction. The system has four drive modes: normal, snow, mud, and sand. In trying the various modes I didn’t notice much difference in driving dynamics, but it did change up the throttle response. While the trails we drove on did have mud, sand, and snow, there wasn’t enough to really put the different modes to test.

Power for the Passport comes from Honda’s tried-and-true 3.5-liter V6. The engine produces 280 horsepower at 6,000 rpm and 262 lb-ft of torque at 4,700 rpm. It’s backed by a nine-speed automatic transmission. Fuel economy for the AWD model is EPA rated at 19 city, 24 highway, and 21 combined. A front-drive model is available and returns one mpg higher overall. The Passport is also rated to tow 5,000 pounds. 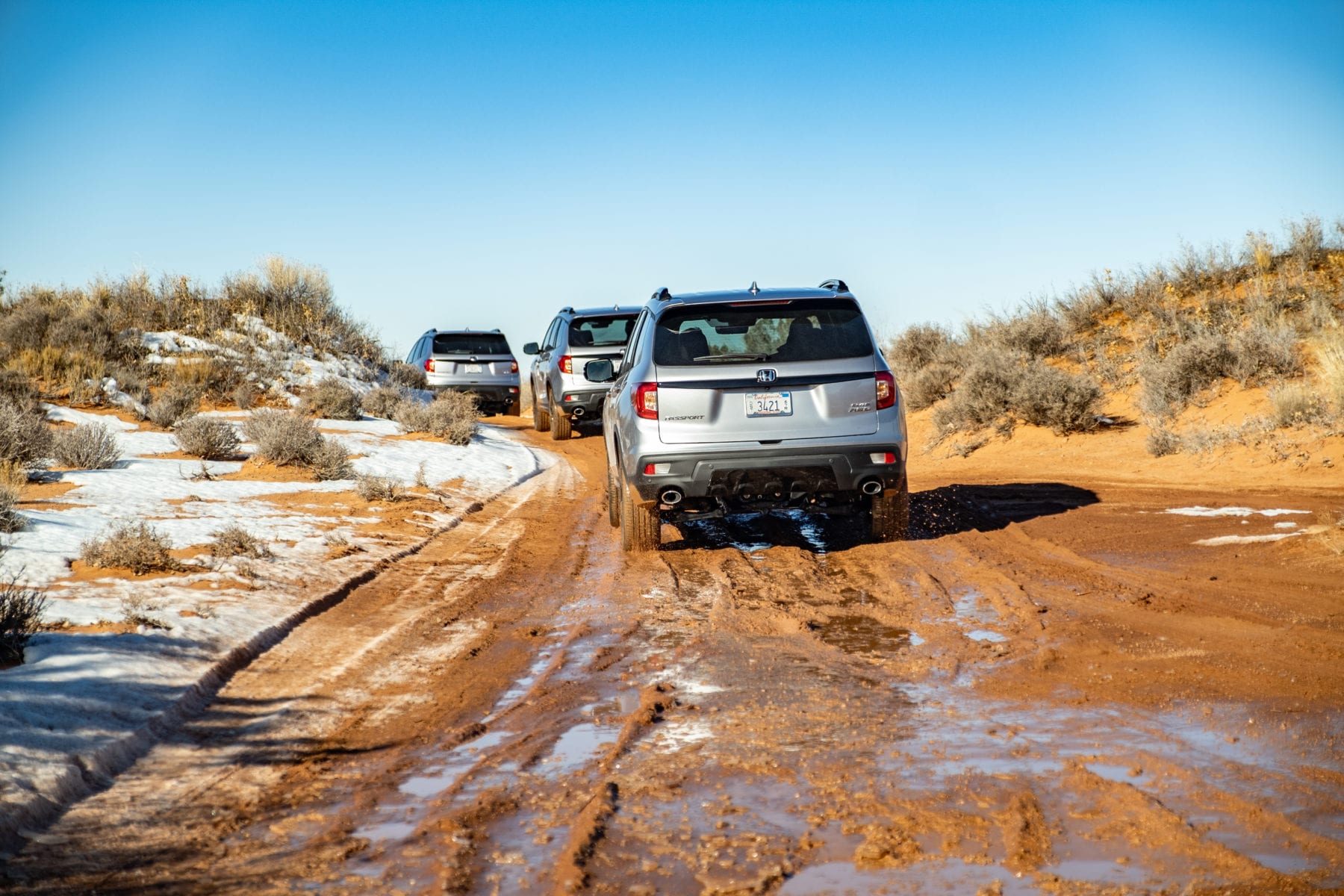 The Passport is built on Honda’s Global Light Truck platform, which is the basis for the Pilot and Ridgeline. It shares the same wheelbase as the Pilot at 111 inches, but it is 0.8 inches higher ride height, and 6.2 inches shorter than the Pilot in overall length. This reduction in length and rear overhang is entirely in the rear and makes a large difference in departure angles off-road.

With the exterior styling, Honda has given the Passport its own facia, though recognizable to the family, as well as a sloped rear window, where the Pilot has a vertical rear styling. 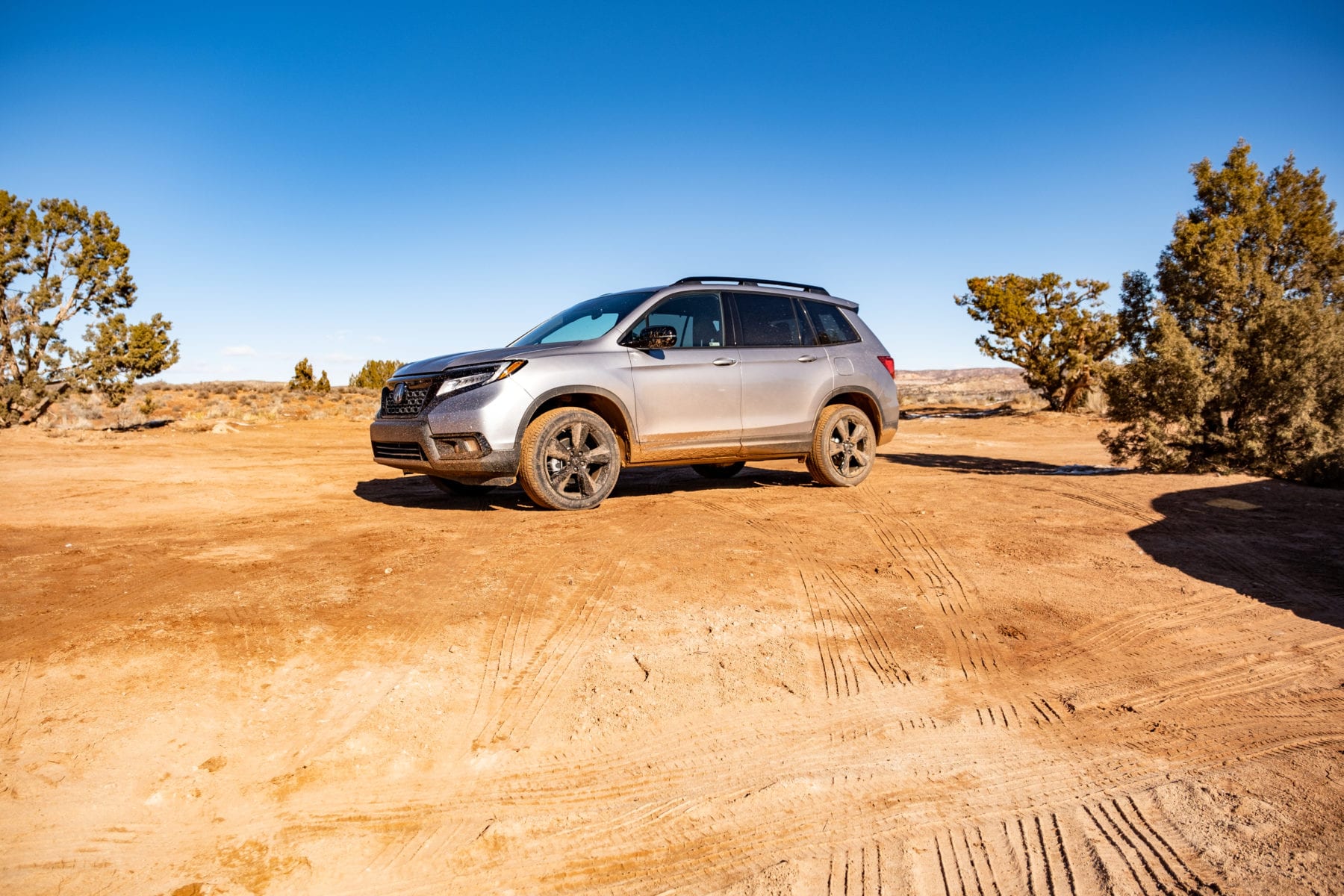 The interior is Honda, and that’s not a bad thing. The materials are good, fit and finish are excellent, controls feel nicely weighted, and other than wanting more buttons and knobs for the infotainment system (there is a knob for volume) there is little to complain about. It has all the same technology that everyone else has – Bluetooth, Apple CarPlay, AndroidAuto, wireless charging for your phone, multi-view rear video camera, full boat driver aid and safety system (Honda Sensing), and on and on and on. This is at the base level Sport trim. 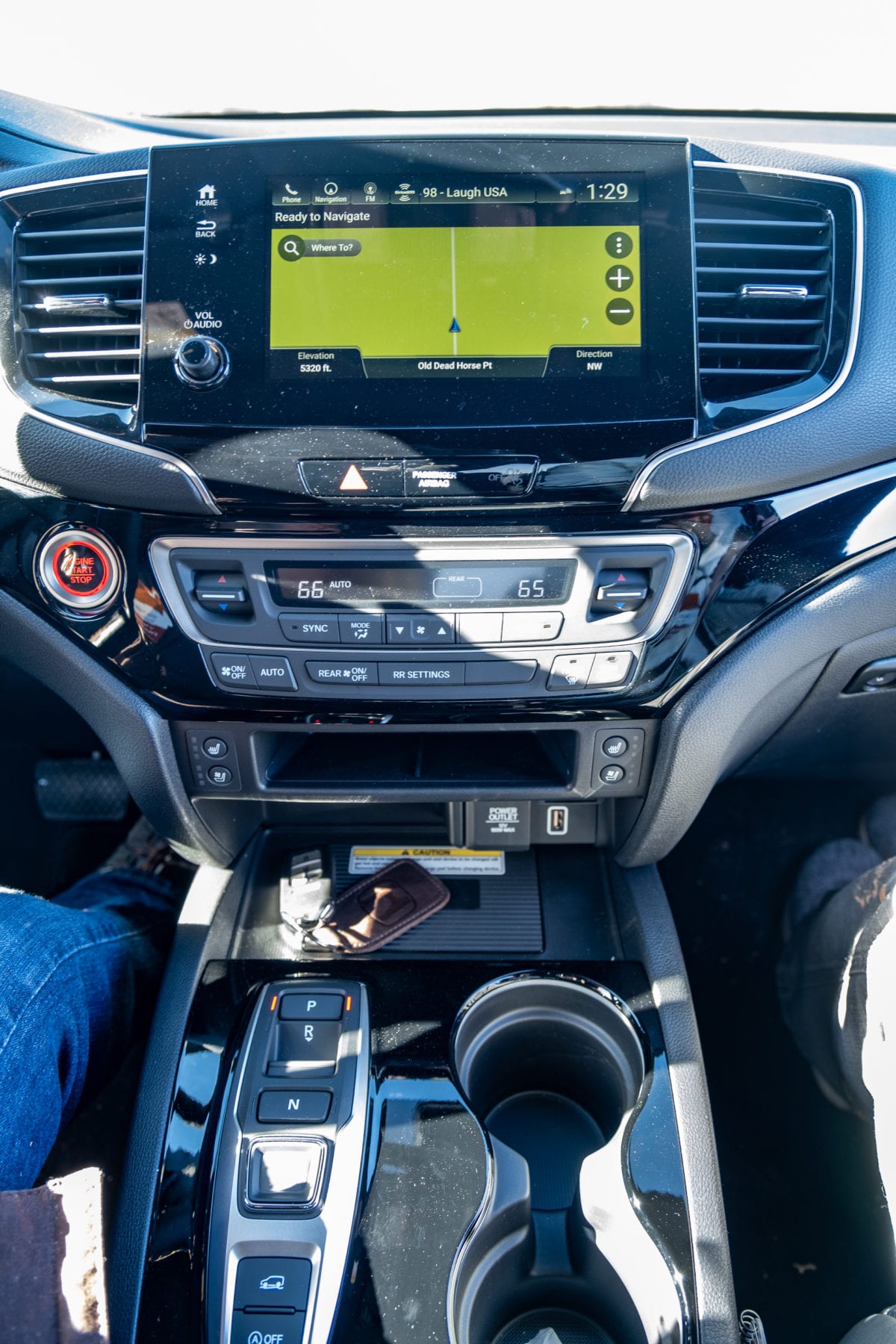 Honda has this thing for hidden trunks and the Passport has one as well. Flip up the floor in the rear cargo area and you have a nice area for setting up for your tailgating or picnic. 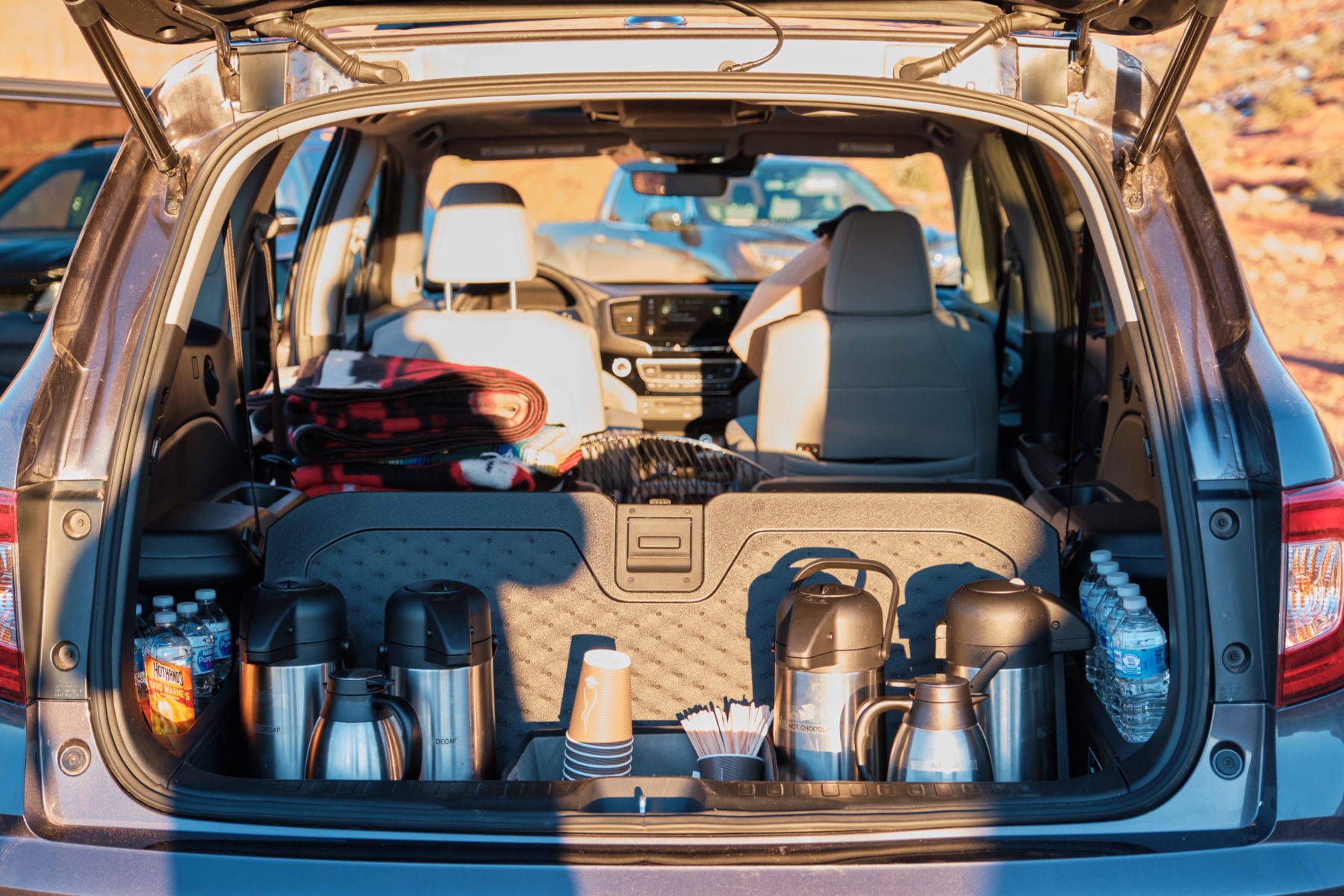 If I do have one gripe about the interior it’s this: I’d like the driver’s seat to be able to adjust lower. I know everyone wants their high driving position, but I felt like I was on top of the vehicle rather than in the vehicle. Also, the passenger seat has no height adjustment, and it feels very tall.

Rear seat room is good. I could comfortably sit behind myself at 5’10”. The rear seats fold flat in a 60/40 split, and Honda says it has the largest interior volume in the class at 115.9 cubic feet and with 41.2 cubic feet; only the 4Runner has more cargo volume. 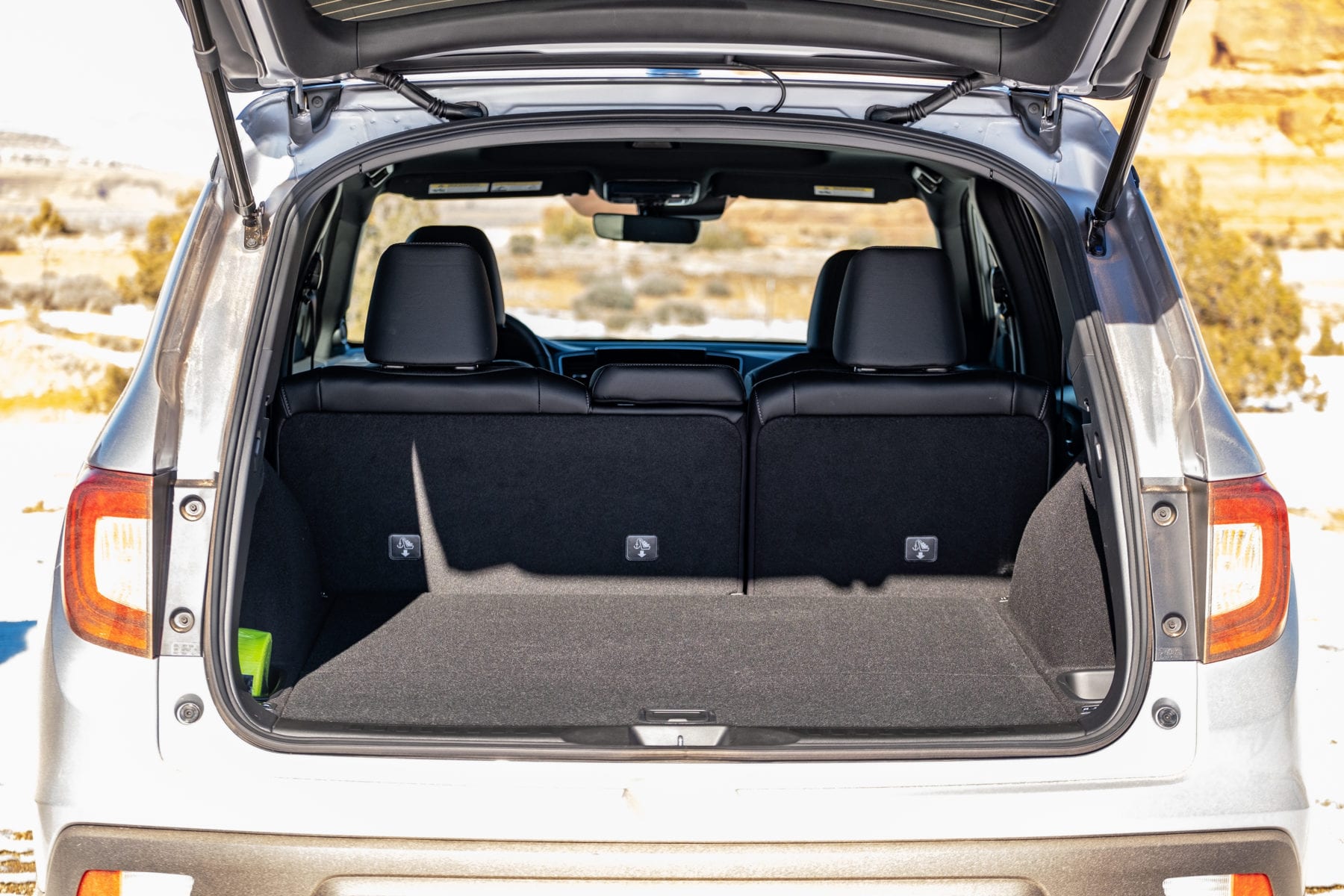 Out on the road

On road, the Passport is just fine. It rides well, there is little-to-no wind noise, and road noise from the tires is minimal as well. It’s a nice, quiet cabin you can do a lot of miles in. Rolling down the highway at 80 mph, you are turning right at 2,000 rpms. The electric steering is fine, it’s about what you have come to expect in modern vehicles. There isn’t a ton of feedback but really the target audience for the Passport isn’t wanting or expecting much to begin with.

We had so much fun exploring the trails that we were a little late heading back to the base location for the sunset views. While the navigation system said the drive would take 45 minutes and we’d be late, it took just under 30 minutes. The Passport was able to hustle on a two lane frost and ice-covered twisty road without too much effort. 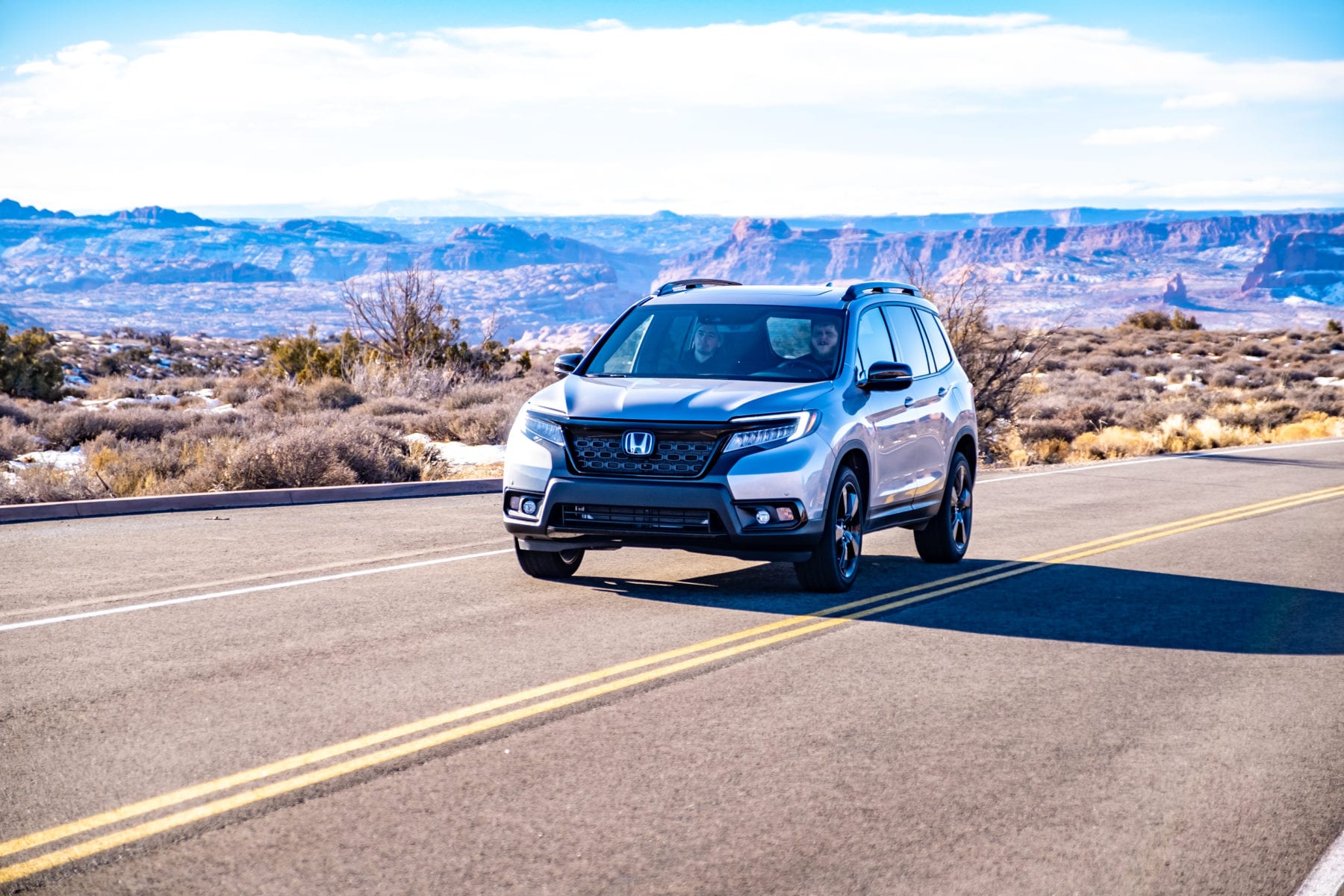 As I mentioned earlier, take this off-road and you will be pleasantly surprised at how capable it is. You aren’t going to go rock crawling with it and its lack of hill descent control will keep it from some of the hardest of two-lane trails.   It is more than capable of taking you to your favorite camping spot or mountain bike/hiking trail, hauling you to your favorite kayaking place, or whatever adventure point you have.

Trims and pricing with delivery for the Passport are as follows:

Most people who buy the Passport won’t take it off-road. A dirt road is about the hardest use 90% of these vehicles will ever see. The Passport is a Honda, so you can feel confident that if you buy it, you can drive it for the next 15 years and 300,000 miles with few (if any) worries. Not only is this a very good vehicle, when you compare it against its competition with standard equipment at the different trim levels, it is very good value for money.

While I went on this trip first and foremost for the locations and the views, it turned out Honda built a vehicle that was worthy of the location, and that was what made the trip all the more fulfilling. 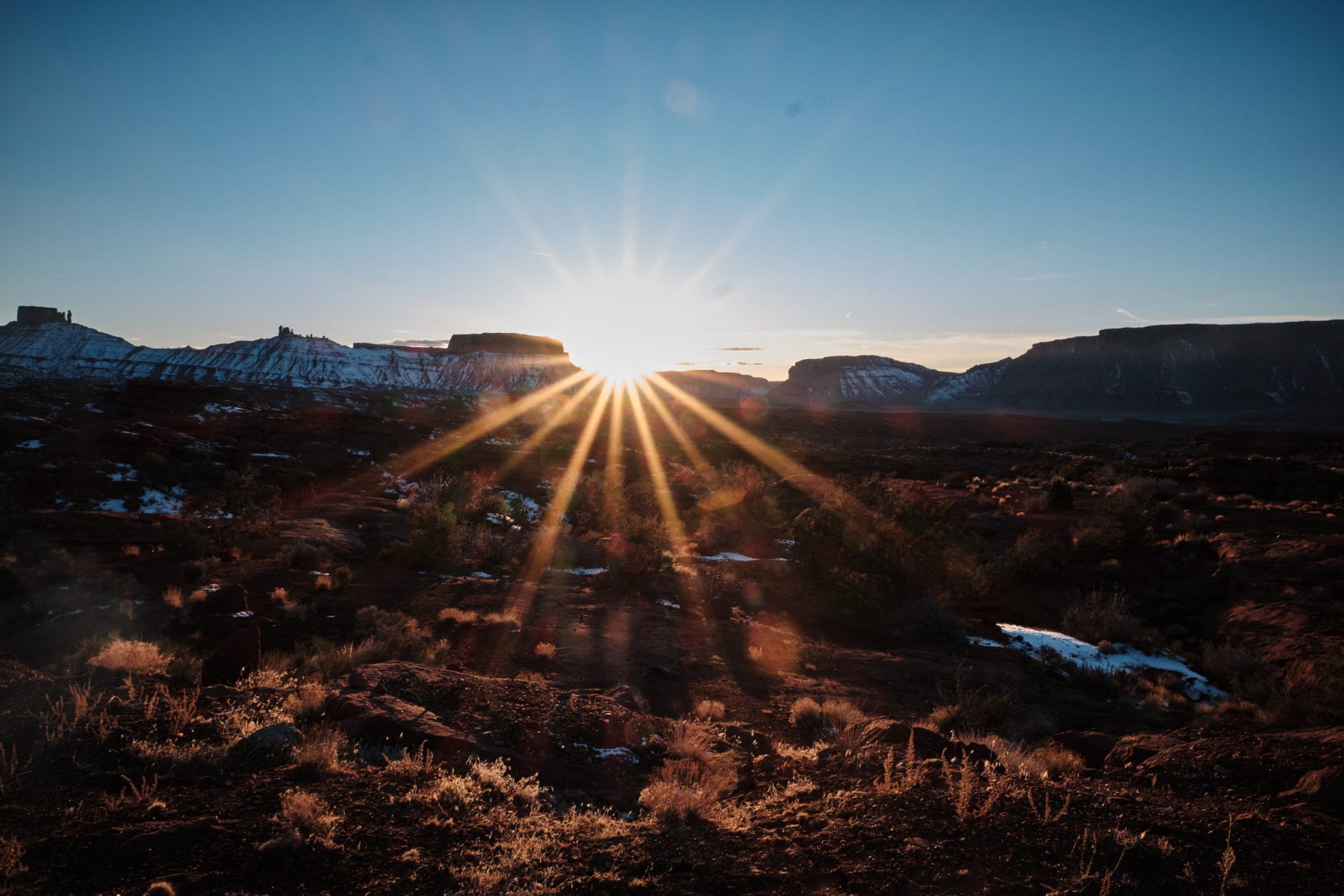 [Disclaimer: Honda wanted us to drive the Passport, so they flew us to Utah and put us up in a hotel. There was food and drink as well.]