I’ve said before that when Oldsmobile got canned in 2004, no one really cared. Heck, I didn’t really care. However, several different threads have suddenly found themselves woven together in my automotive awareness. I’ve changed my mind. Oldsmobile did some strange yet cool stuff in the final years of their existence. It’s all very 1990s, and some of it involves touchscreen CRTs.

The reason why I am starting with an engine and not a car will soon become clear. Bear with me.

In my post about how related Cadillac’s Blackwing & the C8’s new flat-plane V8 may be, I made a naive mistake. My claim was that you cant just convert a push-rod engine to DOHC. I thought that was a reasonable thing to say, but I forgot about pre-bailout GM. I forgot about the things they did.

GM’s LQ1 V6 was originally a push-rod motor, and was converted to DOHC. I would like to personally thank Hooniverse commenter Fuhrman16 for correcting my ignorant assumption. I found this semi-transparent rendering of this engine that may help explain some things, but I’ll also briefly talk through some details. The actual camshaft in the block has been replace with… just a shaft. The engine sends power from the crank to this shaft with the chain that was there in the first place. However, this shaft now also has a toothed pulley fixed to the front of it. This pulley–with aide from a few guides and tensioners–sends power to four camshafts that are now in the head. Is this the only engine to have both a chain and belt-driven valvetrain? Usually I would be into this kind of niche mechanical complexity, but I really don’t know how I feel about this.

This whole system looks clever in the picture, in reality it actually looks like a mess.

The LQ1 was the premier engine available in the Fifth-gen Olds Cutlass Supreme. I read Fuhrman’s comment this morning, saw this thing parked on my college campus, googled it, and there it was. The quirks, the features, they were all streaming directly into my conscious.

The futuristic styling of the Cutlass went well with the Jetson’s theme song that has been stuck in my head for several days. Not the whole song, just the part where they say, “He’s George Jetson.”

For reference, the Chevy Cavalier at the time looked like this:

The LQ1 may have been the strangest engine offered in this car, but the entire lineup of engines was actually pretty unusual as well.

Over the course of production seven engines were offered. Five of them were 60 degree V6 engines, one of them being the LQ1. The rest of them were still cam-in-block though, so they made absolutely pathetic levels of power. Initially, the base 2.8 liter V6 made 130 horsepower. This motor was later replaced with a four cylinder, 2.3 liter “Quad-4” engine which made 180 horsepower (actually pretty impressive for an NA 2.3.) Perhaps these engine offerings made more sense at the time, but looking back on it now you kind of wonder what they were thinking.

Although this thing was marketed as a luxury car (yet strictly front-wheel-drive), it could be had with a five-speed stick, which was apparently a pretty good transmission.

This car’s styling is cool. It’s pretty unashamedly stuck in the era in which it was built, which I like. Other vehicles from this era just look compromised, like they were trying to please everybody just a little bit. This thing looks bold, and even if you don’t like it, you gotta respect Oldsmobile for actually putting something on the line.

Just look at that invisible C-pillar. Wheels aren’t bad either.

In a 1990 MotorWeek review, John H. Davis called this car, “A celebration of the full figure, it’s the Sears Tower, it’s Marilyn Monroe, it’s Donald Trump, or at least his ego.”

I would unironically put this in the running for one of the coolest ‘Olds ever. Its just so nineties, the styling is extremely bold. Oldsmobile thought this was what the future looked like a quarter century ago.

The advertising campaign for these cars at the time was the classic “NOT YOUR FATHER’S ________”. That would usually that mean GM found an Opel or Vauxhall they liked across the pond and sold it under an American automaker’s name with some different taillight lenses. This was not the case with nineties Oldsmobiles. Just look at this car. It took genuine risks to try and get some appeal from younger buyers. Those risks weren’t just on the outside either.

This car got a touchscreen on the dash which controlled many of the vehicles systems. Being 1990, it’s a CRT, there’s no liquid crystals or LEDs going on here. I do recommend you watch the MotorWeek review where this system is used. It is actually extremely responsive, and the interface is very well designed. Just wait until he hits the “SYSTEM MONITOR” button.

And if you’re wondering, “Do these still work today?” the answer is… Yes. Here’s another video that provides a much more in-depth summary of how the touchscreen functions. Some of the graphics are just sweet.

Some cars also got an experimental GPS navigation system, one of the first to ever receive such technology. There was even a computerized voice named “TravTek” guiding you along. Even though most Troféos didn’t get this system, they all got a digital compass that was called “Navigation.”

That wasn’t the only cool interior feature, either. The car was also available with a hands-free cellphone (a one-thousand dollar option at the time). This could be operated from the touchscreen as well.

Really, the whole interior is really cool. You should really watch the entire MotorWeek video.

The drivetrain was pretty normal, but it did all of the right things. The centerpiece was GM’s 3.8 liter V6, a very dependable motor that sent all of its power to the front wheels, propelling the car to sixty in about nine seconds. It was backed up strictly by a four-speed auto. This engine and transmission may not seem too exciting, but the exhaust was tuned to make the right sounds, and shifts were comfortable.

What was more exciting was the suspension; independent at every corner. Not only was it independent, but it received GM’s FE3 treatment. This meant a sporty yet supple ride that was praised by magazines at the time.

The braking was also impressive, bringing the 3600 pound Toronado to a dead-stop from sixty in only 122 feet. 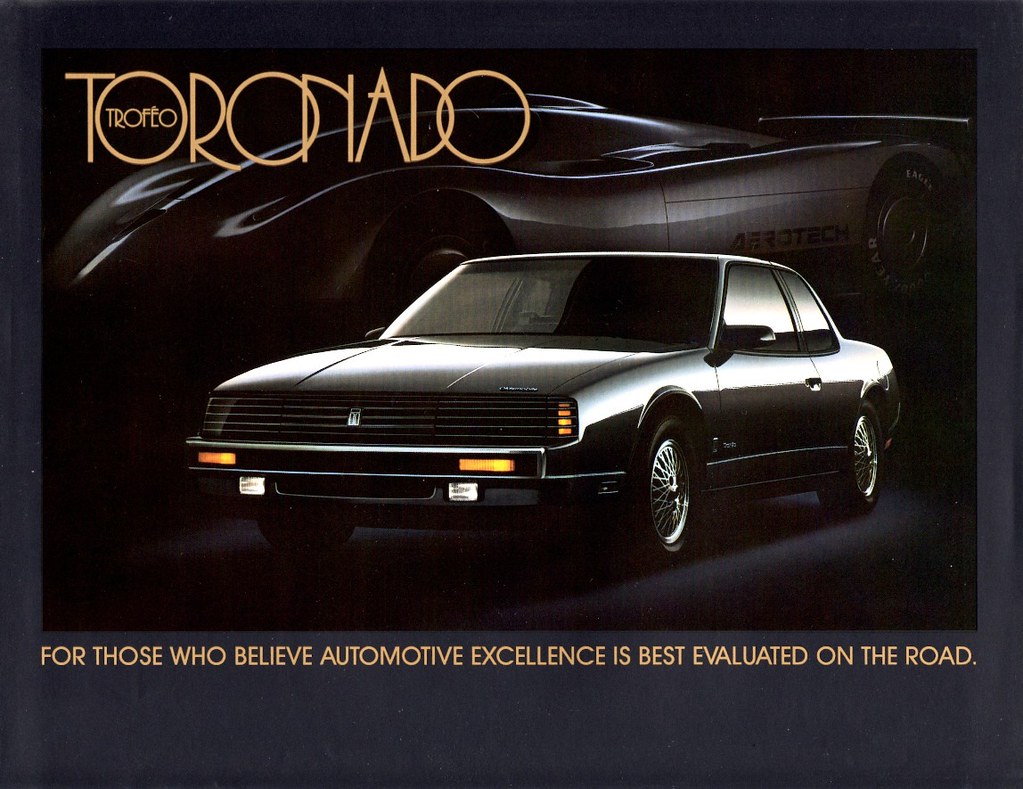 Trofeos aren’t easy to come by as it turns out. Furthermore, it seems like most of them were not equipped with the touchscreen. The whole reason to even think about getting one of these is just because of what a moment in time the car was. If it doesn’t have the screen, is it really worth it?

They go for around $4k-$6k today, but none of the ones I could find had the screen. I was searching feverishly for the screen. I was far off the beaten path, wandering through sketchy used car websites, auctions, and craigslist.

Then, I realized my stupidity. I was only looking in the United States! I quickly began to search Canada, and I had nearly given up. Then, it appeared to me.

In the town of Aroostook, New Brunswick, right on the border with Maine, there is one for sale with the screen. It has 105,000 miles on it, and the ad (on “classicjunkies.com”) claims it’s a V8 (no V8 was ever offered). The color is really nice, it’s in good shape, and the CRT touchscreen gleams like a swift sunrise. It is fourteen-thousand dollars.

I have archived this ad on the Wayback machine, so it is available forever.

‘Live fast, die young’ is generally not a good strategy for an automaker, but I’m not sure if ‘live slow, die old’ is a very good one either.

The defunct automaker Packard’s life was strung out well past its actual demise, its name being defaced by unsightly Studebakers after their corporate merger. The same could be said for Mercury, or other American brands that went out of business in the 2008 recession. Their cars at the end were just sad.

Even if it was just for a little bit–a few model years–Oldsmobile was getting somewhere. The first generation Aurora that came after these cars had bold styling and a 4.0 liter V8. Magazines also praised it for being genuinely nice inside, and handling well. Olds had some momentum going, but in the end, the writing was on the wall.

After more than a hundred years of operating, they went out of business. At least Oldsmobile died young.