The brief for this review, would the Outback make a good replacement for my wife’s Ford Edge for hauling our Irish Wolfhound. You see, while he pops up to put his front paws in the hatch area, he has to have his rear end lifted to get the rest of the way in. Drogon weighs 130+ pounds and he’s a bit much for my wife to lift in. The hope was that the Outback being more of a wagon, he could get in by himself.

Since my wife has expressed interest in the Outback I requested one in for review. I specifically asked for an XT trim so that I could get the 2.4-liter turbo motor. While I have not had any time recently behind the naturally aspirated unit, I did have about half an hour of driving this turbo motor last fall at the MAMA Fall Rally and thought it was good. 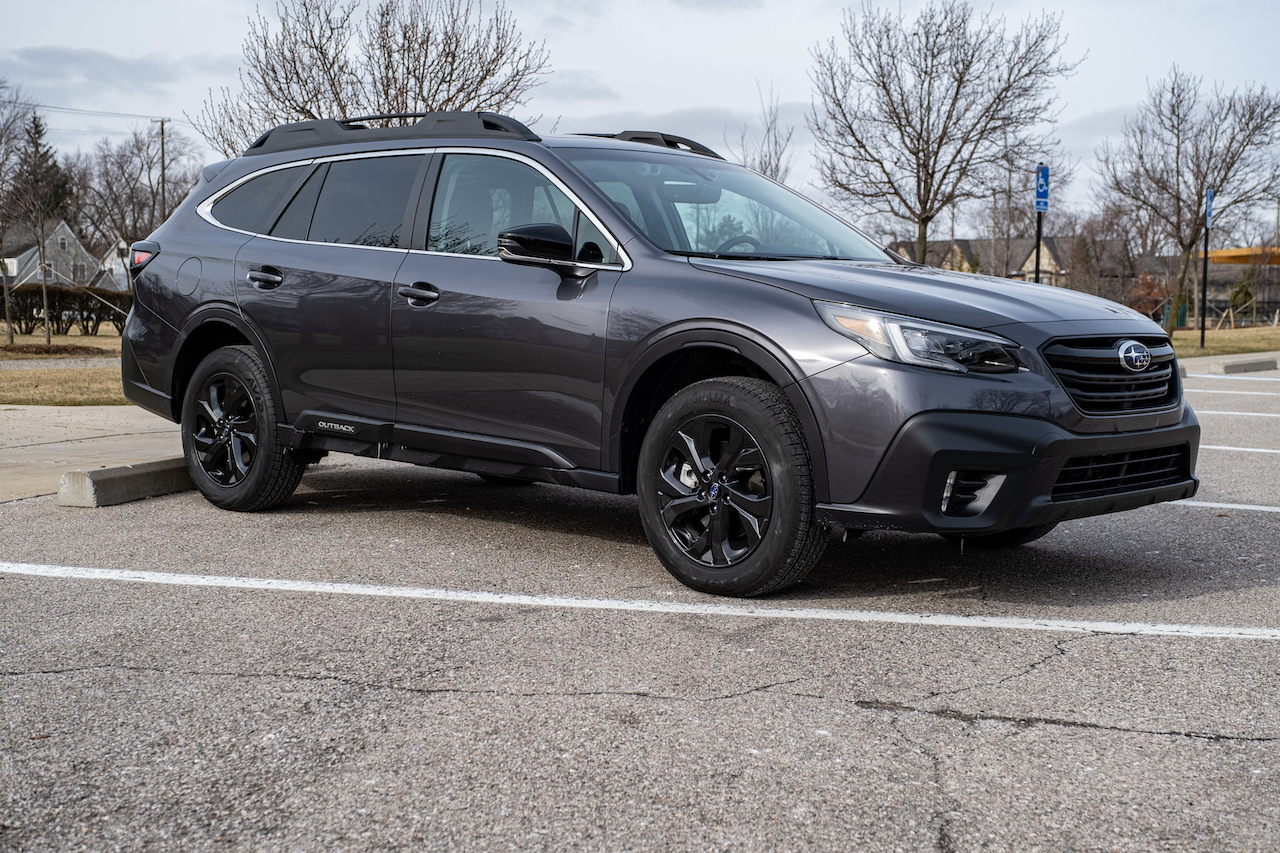 Having driven the turbo motor, I’m not sure why anyone would order the NA version. Especially if you consider the places so many Subaru customers live. Places like Vermont, Colorado, Wyoming, Montana, Arizona and other places with significant elevation. The combination of a 182 horsepower NA motor with a CVT transmission just seems like a bad idea.

CVT’s tend to only work well when they have some torque in front of them. A four-cylinder engine making peak power near the redline at sea level, let alone at altitude where you lose 30% of your power, is a recipe full of not good. The nice thing about the turbo engine is that it will keep it at its rated power up past a mile of elevation. 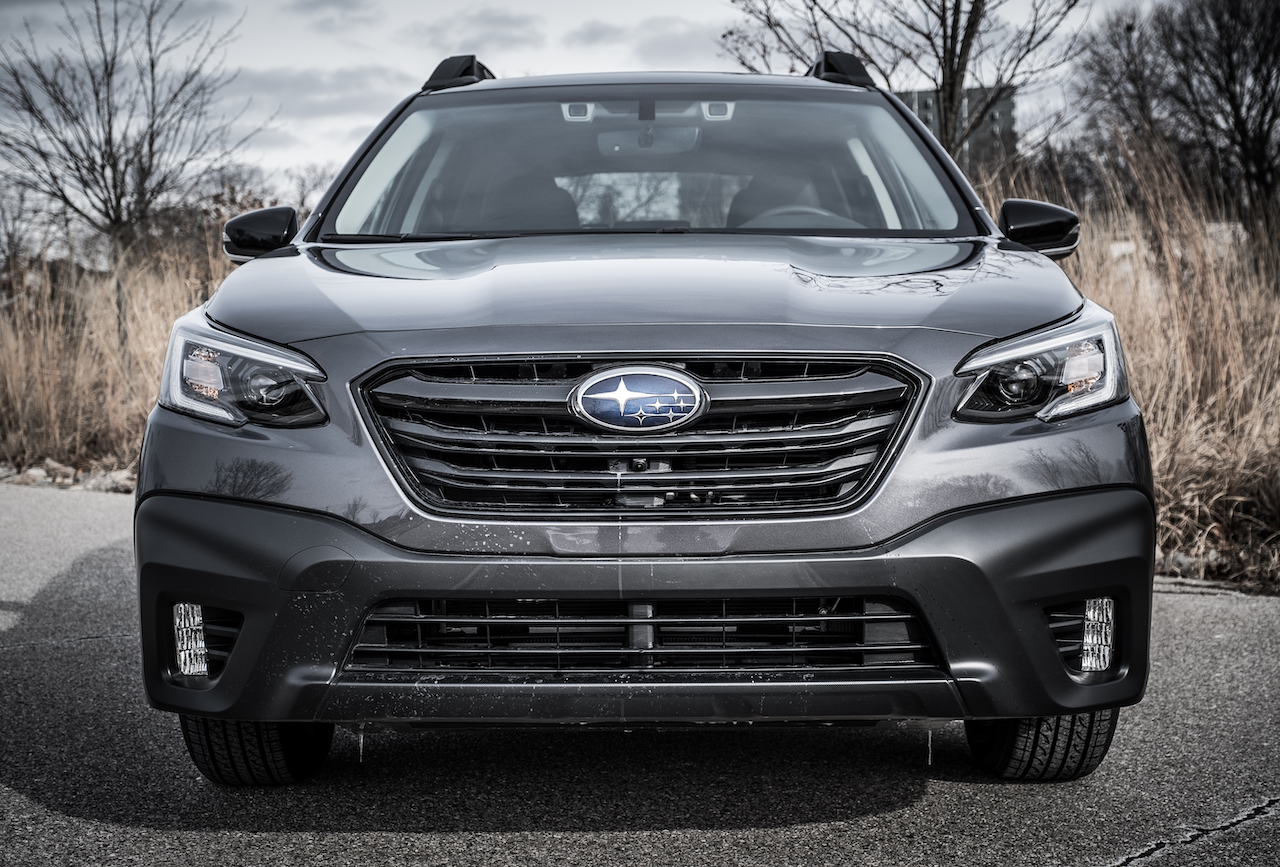 A bigger item for me is the movement of features into an app. For people who buy or lease their vehicles, it’s not that much of a thing. However, when you are in and out of different cars every week, it is a pain in the ass. One thing that is on the Subaru app is remote start. Do you know where the remote start is not? On the key fob. Go ahead, call me a Boomer but can I please just have a remote start on the fob without having to go through my phone. Be it the middle of winter where I want to start it up to warm the cabin or the middle of summer to cool it, it’s far easier with a button on the fob. 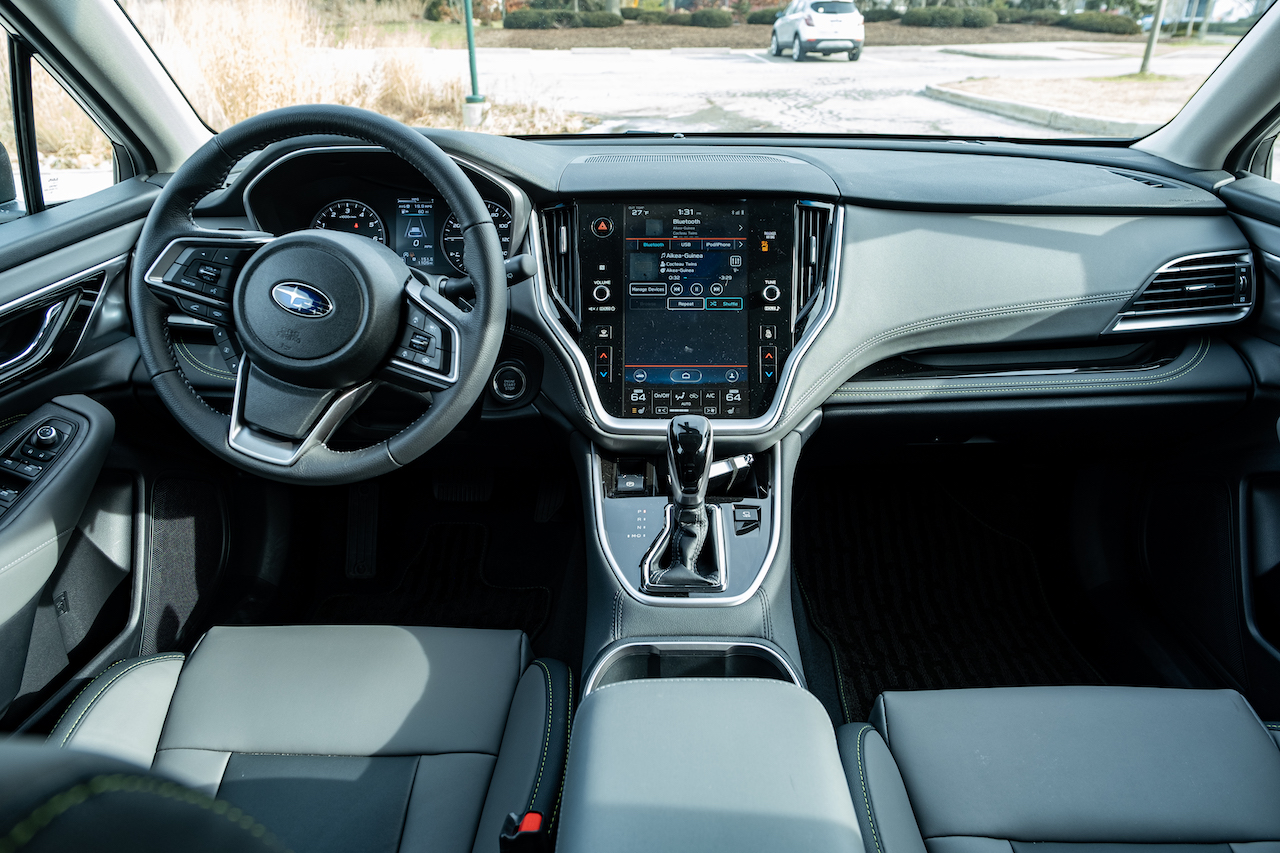 While maybe not a negative, it is certainly a miss and that is no Qi charging on the Outback. More so given the large infotainment screen which we will get to in a moment. Qi chargers in new cars are almost ubiquitous at the $30,000 price point and above. Not present on this Outback.

Another item that stood out to us is the backup camera. The low light resolution on it was not great. If I had to put it in perspective, think iPhone 4 or 5 shooting at night. Sure you can see behind you, but it is very grainy. I wouldn’t solely rely on the backup camera at night, you are best to do a shoulder check as well. 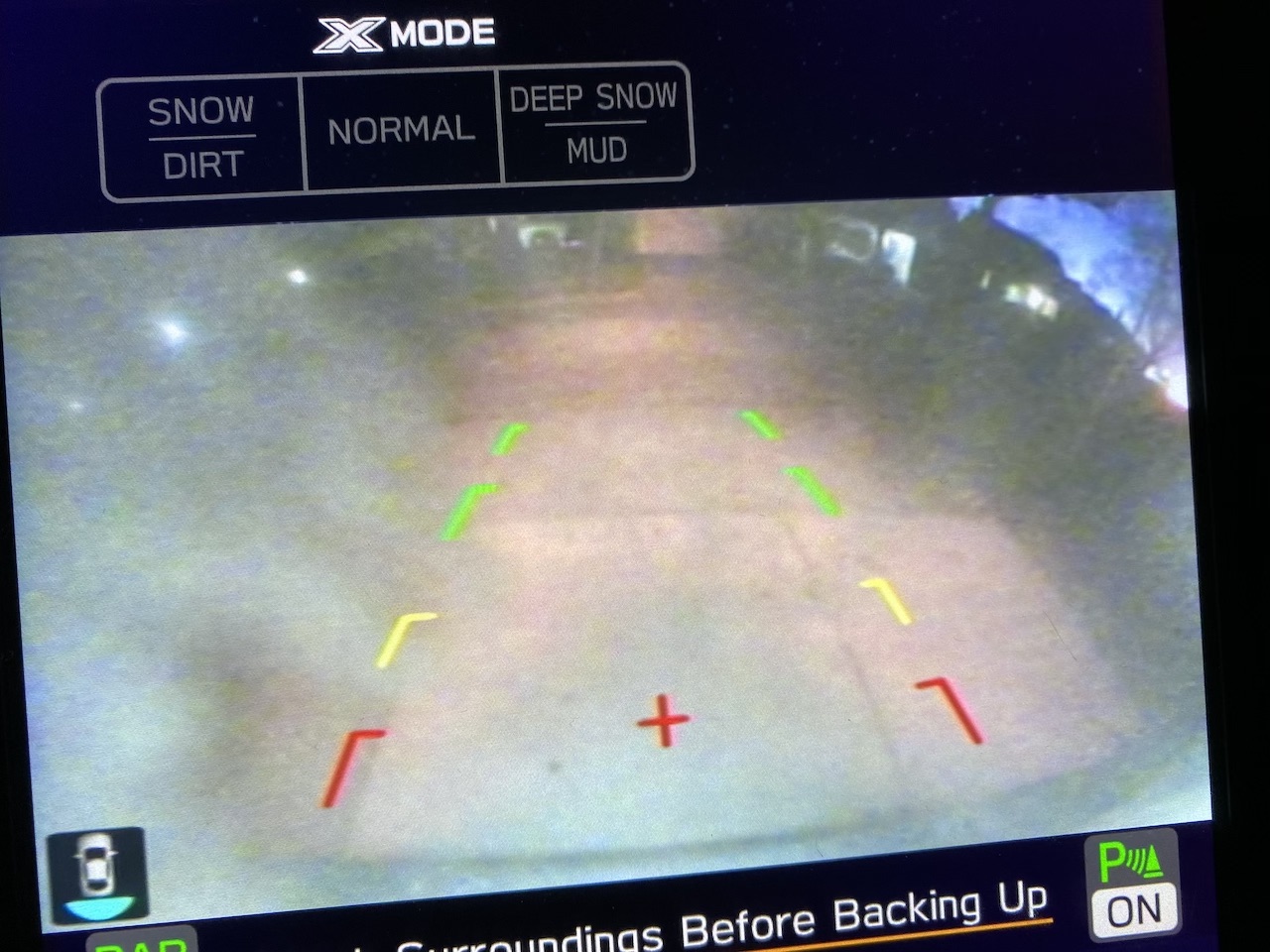 Finally, we need to talk about Starlink. Now if I was to spend more time with the Outback perhaps I could make some adjustments, but that takes time to find out if you can make adjustments and then see how it plays out. Starlink is VERY aggressive in its warning. On several occasions, including with my wife driving, it would beep at you going through an intersection that had a green light. Why? I have no idea. Other times it would go off for reasons I could not fathom. It was to the point I wanted to turn the whole system off, which would be a bad idea. I get that Subaru is very proud of their safety record and touts it in their advertisement. But man, it needs to be dialed back about twenty percent so it isn’t just tuned out.

So back to the top and the original brief, how is this for the dog? It turns out the load height of the Outback is within an inch and a quarter to an inch and a half of my wife’s Ford Edge! Didn’t really see that one coming. What made this more surprising is that to get into her Edge you have to lift yourself slightly to get into the driver’s seat. With the Outback you sit down into it.

The other item about loading Drogon was that the height wasn’t quite as much as I’d hoped. The Forester may have a better height to the cabin, bit that model now sits up higher than some 4x4s. Once in Drogon could not stand up, but he made it work and found a way to be comfortable. When we stretched, while laying down, his nose could almost touch the headliner. 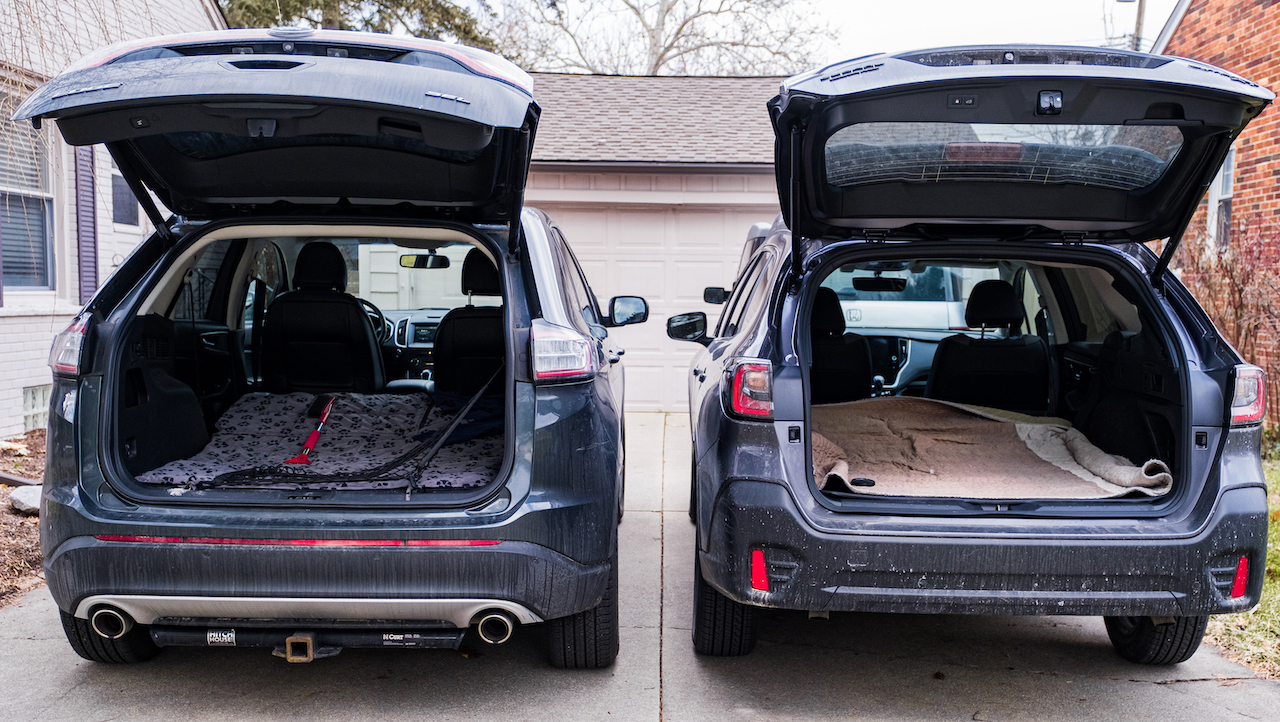 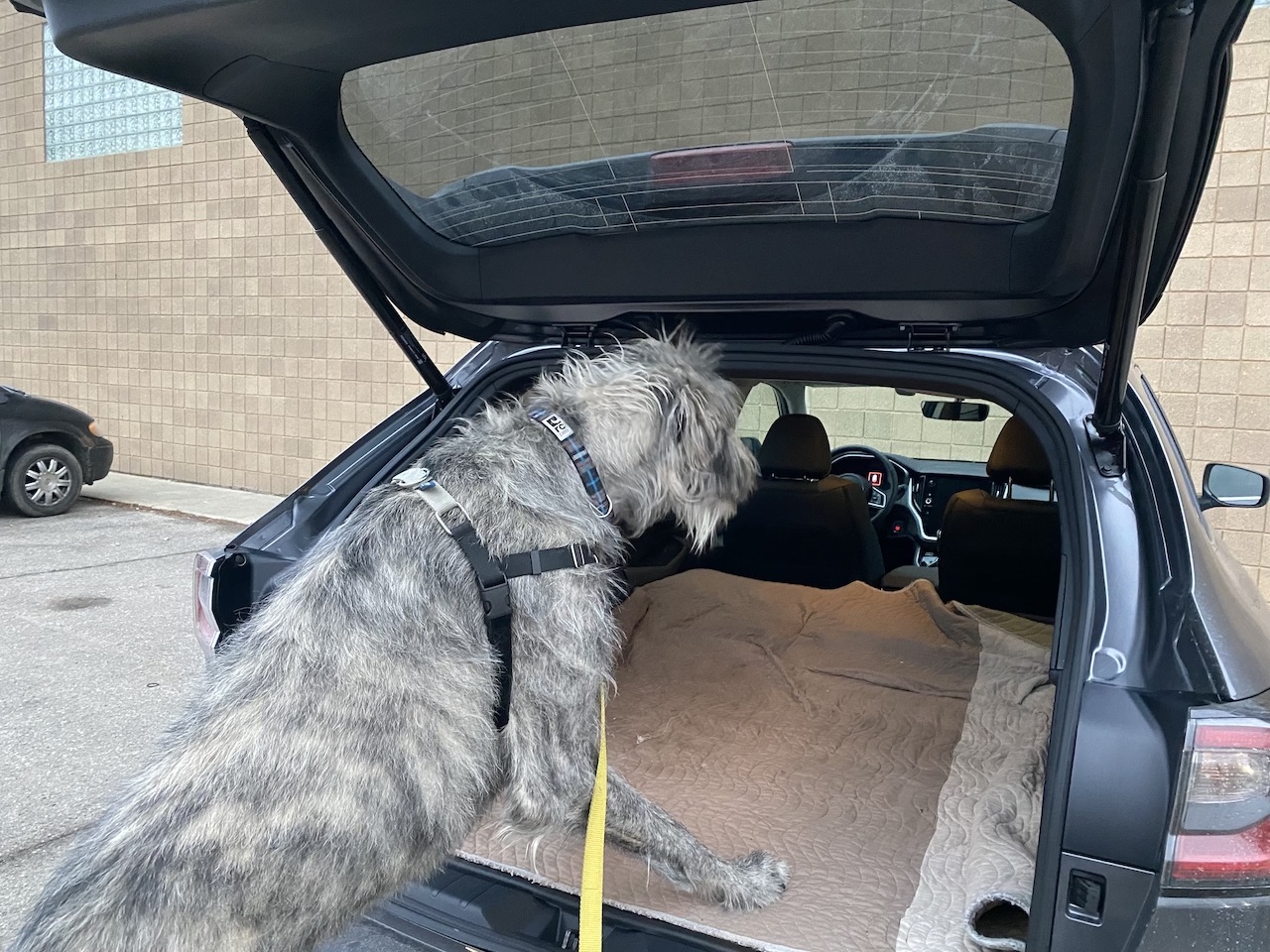 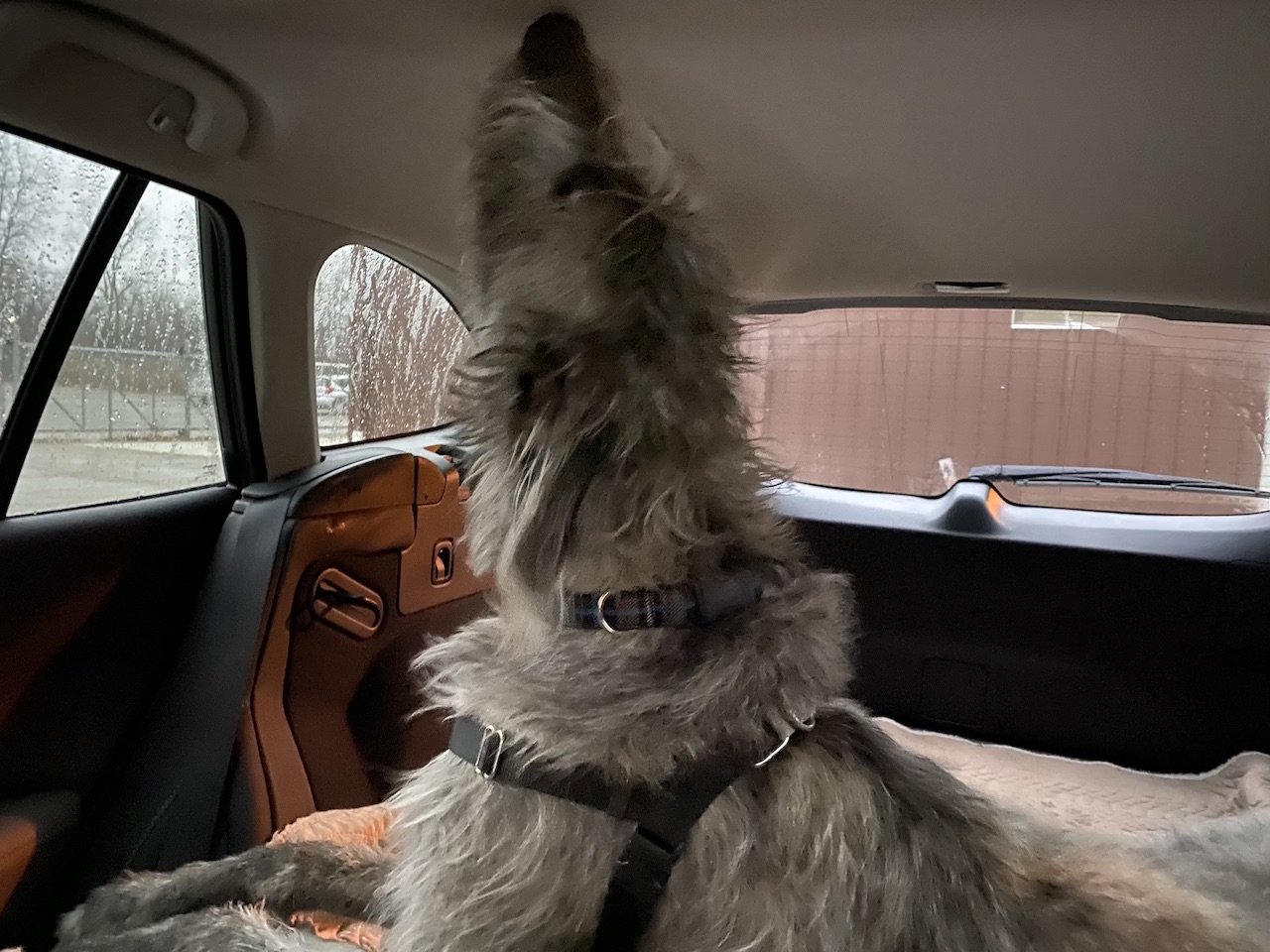 So what is the Outback like to drive? The best test and since it was she who was really interested in the Outback was my wife. Now, she doesn’t care about cars, they are just transportation to her. As long as it’s comfortable and she feels safe she’s good. She actually liked the Outback. She said it would certainly be something to strongly consider going forward. No matter what my opinion is that should say something about how good this new Outback is.

Let’s get back to that infotainment screen. You aren’t going to miss it! For the most part, Subaru did a good job here. Real buttons and knobs make it easy to quickly navigate and activate what you want. For the most part. One item they missed. To turn on the heated (but not cooled) seats you first have to hit the icon on the screen, which it turn, gives you a popup screen to make adjustments. So two actions where only one is needed. Minor thing, yes, but when everything is good, it’s the details that make the difference. 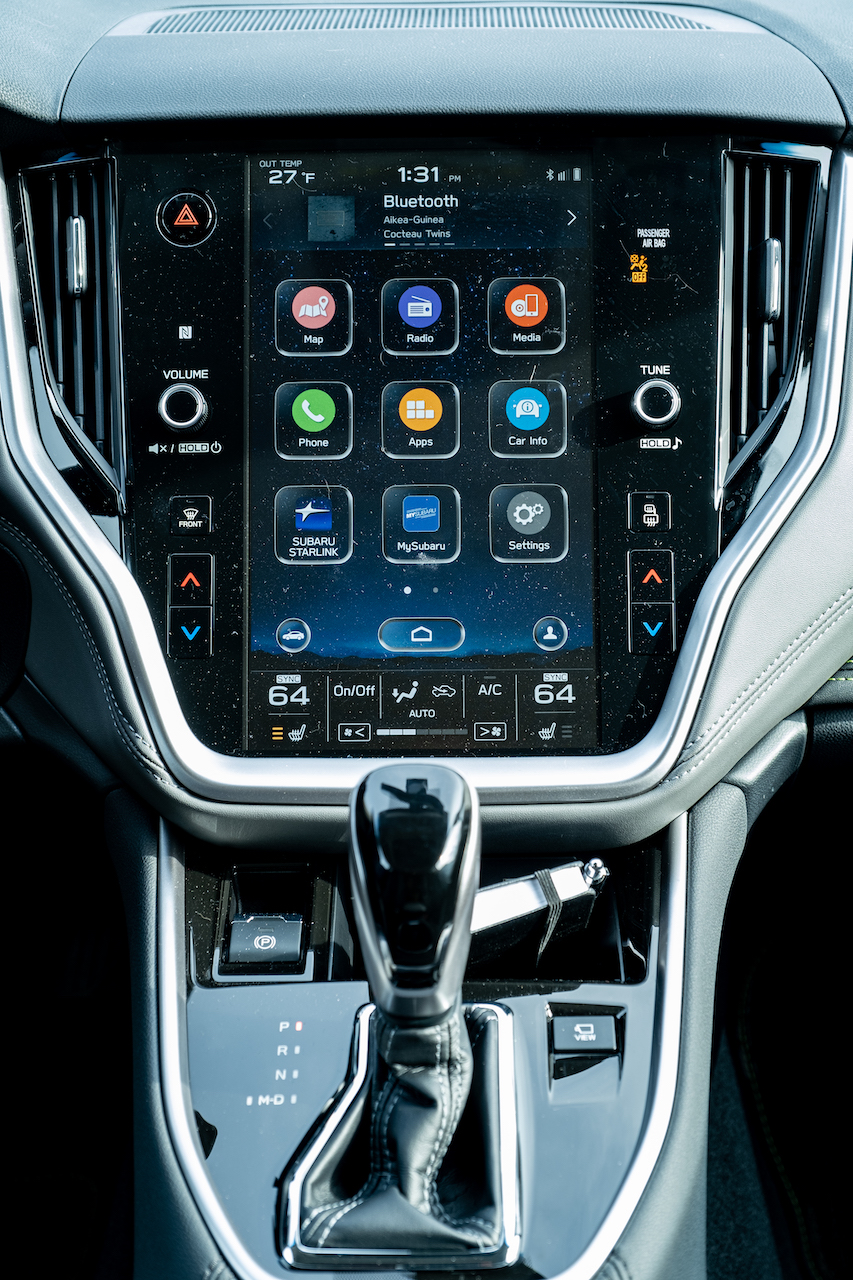 The way Subaru has made the screen sectionable it not a first, but the layout they came up with makes the most use of the screen size without feeling overly cluttered. As you would expect Apple CarPlay and Android Auto come standard, but not wirelessly.

The fuel economy for the Outback was reasonable. The EPA rates it at 23 city, 30 highway and 26 combined. We got just about that in our week with it. Cold temps and winter fuel tend to drop our numbers one to three mpg pretty consistently over the last decade-plus of reviewing cars. The Outback, as with most cars these days is equipped with Start/Stop technology. Subaru is nice enough to let you know how much gas you are saving because of this. With ten minutes and twenty seconds of Start/Stop on one drive, we saved 0.069 gallons of fuel. 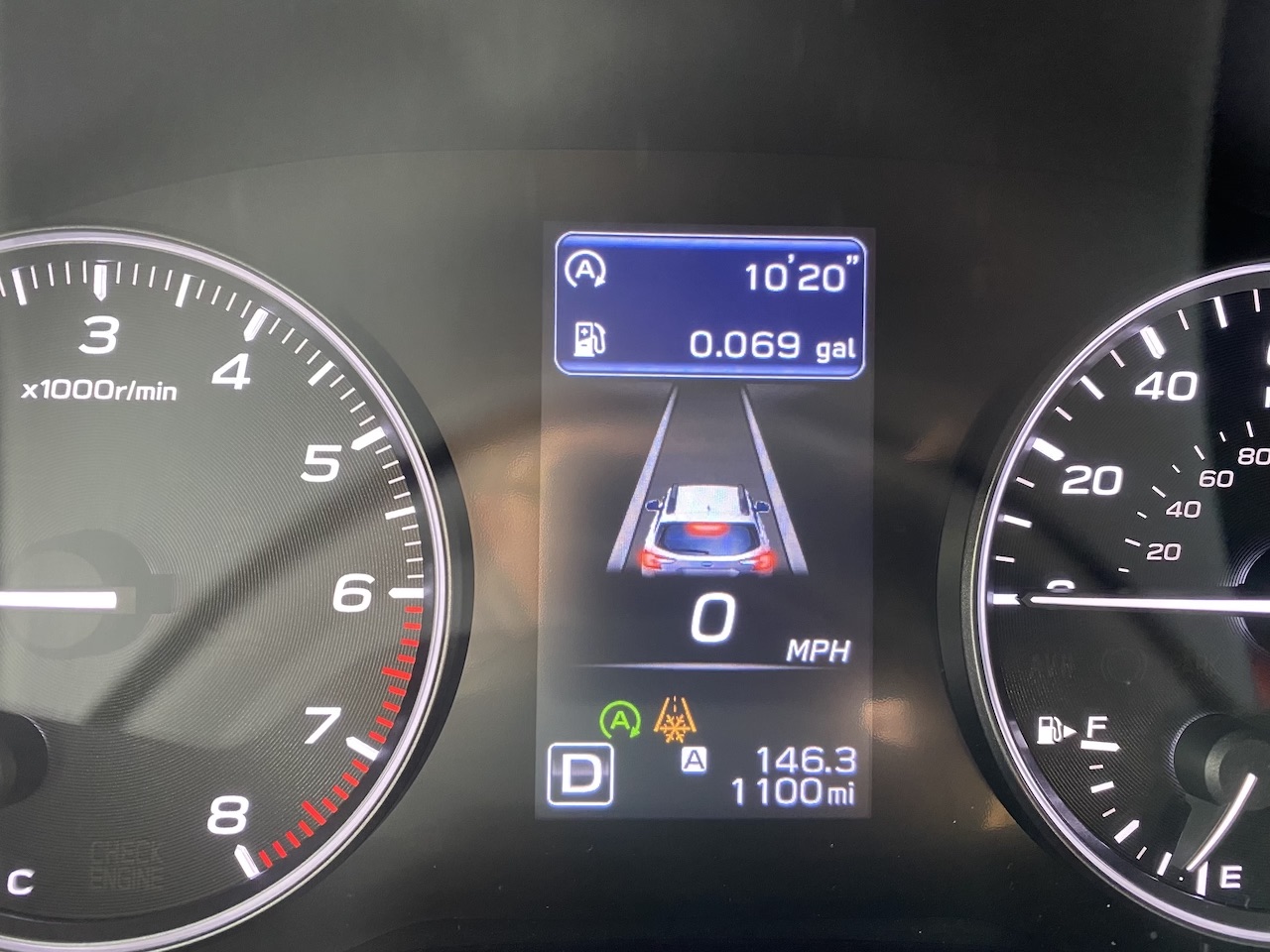 The one item that really needs to be called out with the Outback is the interior. Go back just a few years and the interiors of Subaru’s could be called serviceable at best. Now, they have made huge strides forward. While I would not call it segment-leading, it is most certainly segment competitive. That is a huge jump and will make Subaru’s even easier to sell to the mainstream consumer. 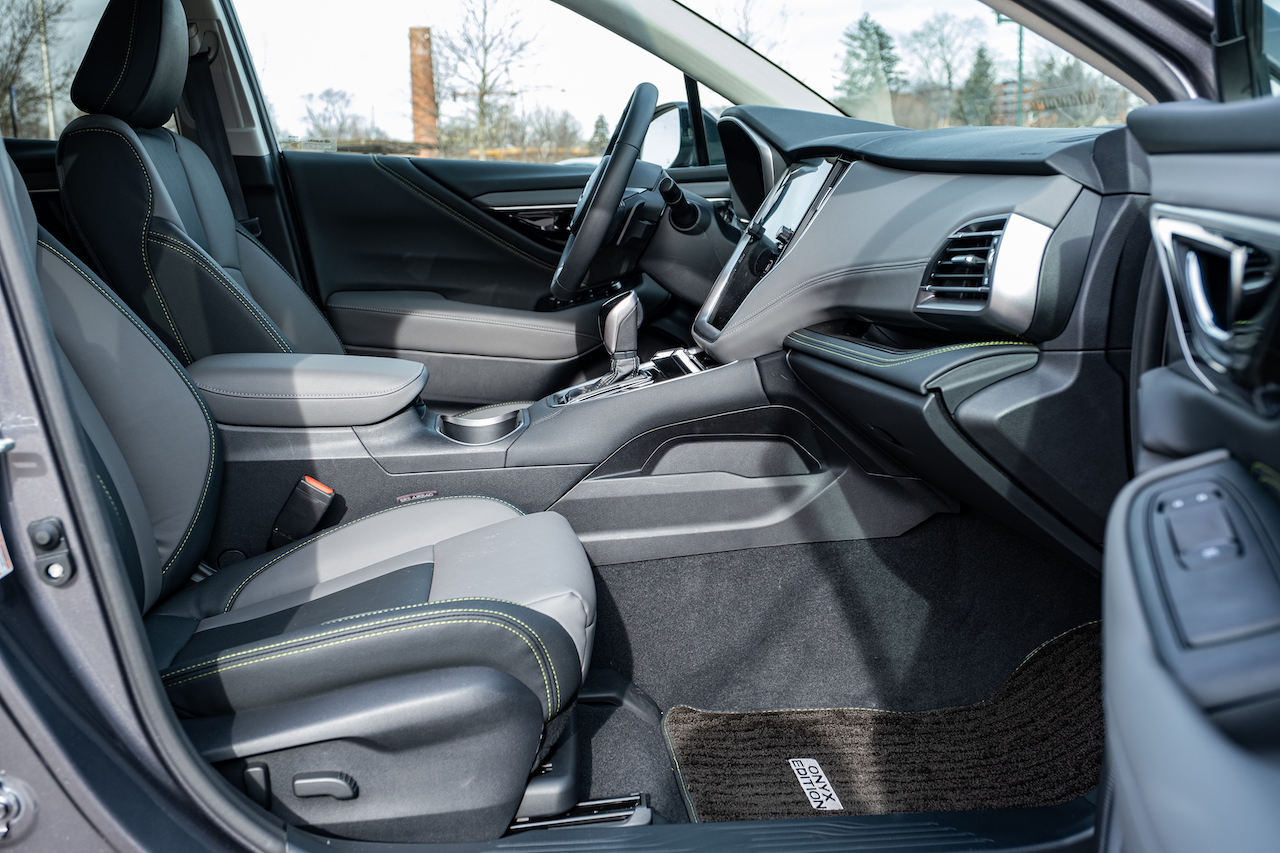 Living with a vehicle long term a nice interior is key. Sure you’d like your vehicle to look good. However, since you spend most of your time inside the vehicle, a good interior is key to long term satisfaction.

In the end, does the Outback live up to the reputation that it has built up over the last ten to fifteen years? I believe so. It drives nicely, it’s quiet, it soaks up the bomb cratered streets of South East Michigan with ease. It is well laid out, is very functional and returns reasonable fuel economy. The Subaru network of dealers has a good reputation so servicing the vehicle should be easy as well. 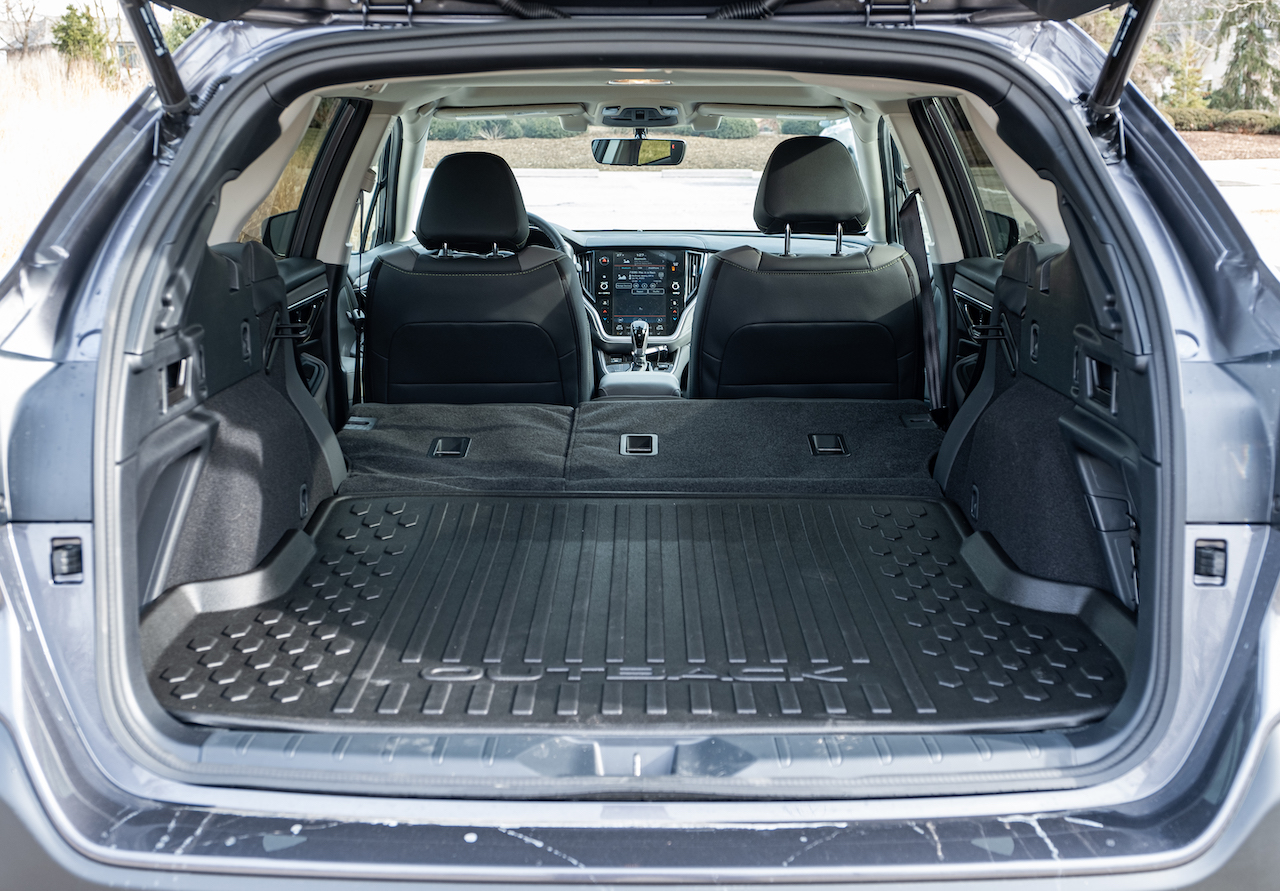 The best compliment I can give the Outback is that it drives like a car and not a crossover. It doesn’t feel as if the center of gravity is three feet in the air as most crossovers do. If feels well planted, not tippy at all. Best of all it’s not just another crossover. It’s a tall wagon. There is enough there for those like me who have grown so very tired of forgettable crossovers, yet not off-putting to the general consumer who thinks crossovers are the only choice they have in 2020.

If you’ve never spent time with an Outback, go drive one. Spend more than fifteen or twenty minutes with one and you will see why they have become such an iconic vehicle. 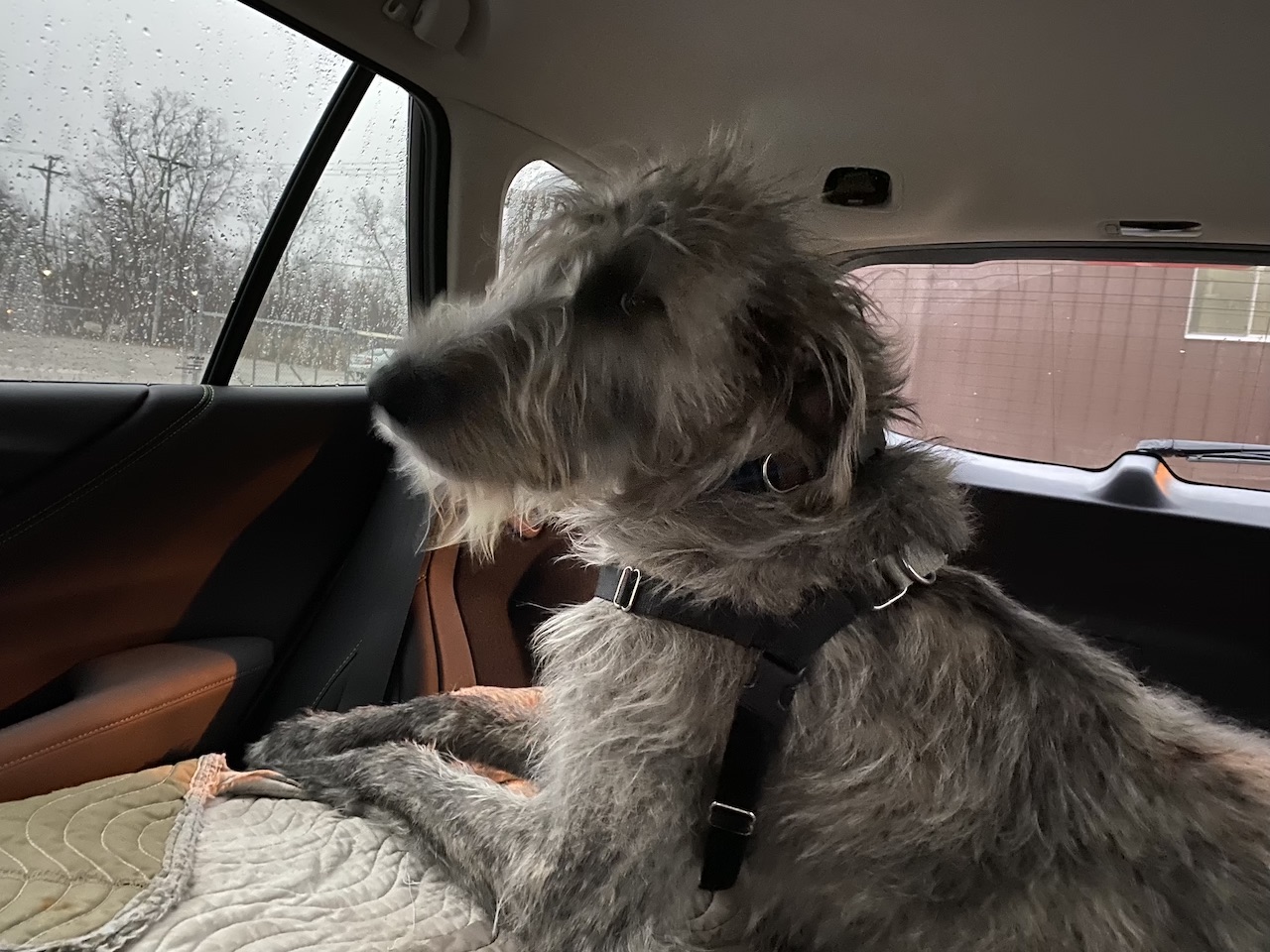