Wolfgang von Trips was born in Kerpen-Horrem near Cologne in Germany.  Nicknamed Wölfchen by his parents, the young count was sickly as a boy; von Trips was beset with inner ear problems which affected his balance, stricken with Bell’s Palsy after a bout with meningitis, and later diagnosed with type 1 diabetes that would affect him throughout the rest of his life.  While his myriad illnesses kept him out of the German military, they also made his parents understandably overprotective of their frail son.  So, it must have driven them right out of their heads when, in 1950, their son secretly took up motorcycle racing, under the alias Axel Luther, and promptly crashed…breaking his arm in the process.


In 1954, von Trips won the 1300cc class at the Mille Miglia and finished 2nd in the 1600cc class at the ADAC Nurburgring 1000km in a Porsche 356.  In 1955, more success at the Mille Miglia and the Nurburgring, and a seat with the Mercedes-Benz works team at the RAC Tourist Trophy at Dundrod.  Over the next 3 years, Wolfgang’s career progressed in sports car endurance racing with class victories and the occasional podium finish with Porsche at Sebring, Nurburgring, Solitude, LeMans and Avus, and a European Hill Climbing Championship in 1958 in a Porsche RSK.  Then, a change to Ferrari and still more podium finishes in endurance racing at Buenos Aires, the Mille Miglia, Nurburgring, Caracas and the Targa Florio, which, in turn, lead to his less than successful 1st Grand Prix start at Monza.

As Wolfgang enjoyed these many successes, there also came an equal number of crashes, and a nickname given to him by British racing fans….Count Crash.  But, it was his future Ferrari teammate Mike Hawthorn that dubbed von Trips, “Taffy”; a name the Welsh gave to their most fearless men after the River Taff which flows through Cardiff.  Wolfgang von Trips was making a name for himself beyond racing as a writer, journalist and documentary producer.  At the same time, he introduced karting to Europe when he opened a cart track near his ancestral home in Cologne (the von Trips family would later lease that track to Rolf Schumacher, whose children would put the facility to good use).
In 1959, von Trips returned to Porsche with consistent top 10 finishes and the occasional victory in endurance racing and selected starts in Formula 1 and 2.  Then, back to Ferrari for the 1960 season, where he’s showed a steadier, mature and more successful form netting regular podium finishes in sports cars.  With the British teams dithering about the new 1500cc Grand Prix formula for 1961, Ferrari set about producing their best F1 car in nearly a decade, the Dino 156 F1 aka ‘the sharknose’.  With the new, improved von Trips and Phil Hill, who finally got his chance to shine in Formula One in 1959 and 1960, Scuderia Ferrari was set to dominate.

After Stirling Moss held off the combined works Ferrari effort at the season opening Monaco Grand Prix, the 1961 Formula One season settled into a duel between von Trips and Hill.  At the Dutch Grand Prix at Zandvoort, von Trips lead flag to flag beating Hill by .9 seconds.  3 weeks later at the Belgian Grand Prix at Spa-Francorchamps, Hill and von Trips traded the lead a dozen times with Hill ultimately gaining the upper hand in the final laps, to win by.7 seconds as Ferrari swept the top 4 positions.

At the French Grand Prix, von Trips would have overheating difficulties in the July heat, ultimately suffering an engine failure.  Phil Hill lead in the late stages of the race, when he spun out at the Thillois hairpin, colliding with Sterling Moss and stalling his car in the process.  By the time Hill restarted the car (running over his own foot in the process), he had dropped to 9th place and would finish out of the points.  Two weeks later at Aintree, von Trips would turn in a masterful performance in the pouring rain to beat Hill by 46 seconds to win the British Grand Prix.  At the German Grand Prix, Stirling Moss‘s Lotus proved more than a match for von Trips and Hill’s Ferrari’s on the twisting Nordschliefe circuit, defeating the Scuderia’s best with von Trips finishing 2nd and Phil Hill just 1.1 second behind in 3rd.
And so, on to Monza, the Italian Grand Prix, and cruel fate.  Wolfgang von Trips lead Phil Hill by 4 points in the drivers championship; a victory for von Trips would make him the first German Grand Prix champion since Bernd Rosemeyer.  The Monza circuit, arguably the fastest track on the F1 schedule at the time, suited the strengths of the Dino 156 F1.  However, von Trips was wary of the circuit having crashed at Monza in 1956 and again in 1958.
von Trips faltered at the start, falling from the poll position to fifth place behind Phil Hill, Richie Ginther, Ricardo Rodriguez and Jim Clark.  Then, on the race’s 2nd lap, as von Trips slowed to enter the Parabolica, he touched wheels with Jim Clark’s Lotus.  The Lotus helicoptered, careened off an embankment,  coming to rest on its wheels. Clark was shaken, but unhurt. Von Trips’ Ferrari ricocheted off a steel guardrail, hurtled wildly across the track and up an embankment, sheared off the top of a chest-high wire fence, then spun end over end back onto the track.  5 spectators who were leaning over the guardrail were killed instantly, their skulls crushed; 9 more died later of their injuries, and 24 additional spectators were injured.  Thrown from the car, Wolfgang von Trips died immediately; his lifeless body laying at track side as his competitors passed by, unaware of the extent of the carnage.
Just over 2 hours later, Phil Hill won the Italian Grand Prix.  As he accepted the trophy, he learned of his teammate’s death and, the first American to win the Formula One driver’s championship, burst into tears.  It wasn’t supposed to end this way.
Wolfgang von Trips would have been 88 years old today.  Godspeed Taffy. 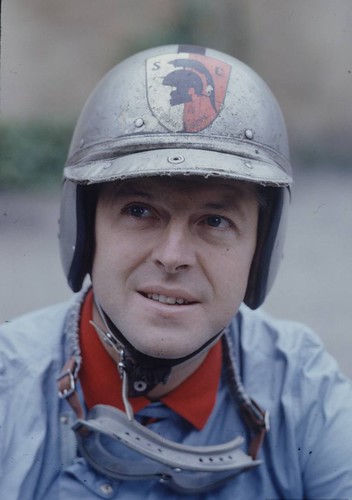