Late May, 1966, the Nurburgring.  Into the Nurburgring’s garage square paddock, amidst vast works team armadas from Abarth, Autodelta/Alfa Romeo, Porsche, Ferrari and Ford, arrived a lone Chevy pick-up truck towing a race car wearing Texas plates.  At that truck’s wheel was Chaparral’s Hap Sharp, accompanied by his wife, Susie, and three mechanics, who’d come to Germany to make the international race debut of their new car, the 2D, at the ADAC 1000km of the Nurburgring.  At the time, I doubt any of the big guns in the garage took notice of this bare bones effort.  That was their first mistake; because while Sharp and his modest team were newcomers to the ‘Ring, the drivers Jim Hall had hired, Phil Hill and Jo Bonnier, were no strangers to the world’s most challenging race track.

The 2D was powered by a 5.5 litre Chevrolet V8, which produced 420 horsepower to the rear wheels via a modified Corvair gearbox, which was much modified by Jim Hall with GM’s assistance.  The European press referred to it as a 2-speed automatic, but actually it functioned as a torque converter which allowed the driver to shift clutchlessly between gears.  The car ran on Firestone tires, into which Sharp and his men had cut grooves on each set, in the event of really wet weather.  Because it was Spring in the Eifel Mountains, they’d need those tires.

The Chaparral would race in the prototype class against the Ferrari P3 of John Surtees and Mike Parkes, and three 2.2 liter Porsche 906 Carrera 6’s.  There were also two works, Ferrari 206 Dino SP’s, one piloted by Ludovico Scarfiotti and Lorenzo Bandini and the other, a N.A.R.T. entry, piloted by Richie Ginther and Pedro Rodriguez who had been very fast in qualifying.  John Surtees had the fastest practice times, hustling the P3 around the circuit in 8 minutes and 31.9 seconds.  However, it was Hill in the 2D that turned everyone’s heads with a lap time of 8’35.4″, good for second on the grid.
Surtees let from the start, finishing the first lap 17 seconds ahead of Scarfiotti’s Dino and Bonnier in the 2D.  Jo moved up to second after 3 laps, but Surtees and the P3 now had a lead of 50 seconds and was in danger of running away with the race.  But not for long, at the end of the 6th lap, Surtees brought a stricken P3 into the pits with a broken rear suspension.  By the time the Ferrari mechanics fixed the suspension and sent Mike Parkes back on the circuit, the Ferrari had dropped into 21st place.

Amazingly, the Chaparral had taken the lead…but just barely.  Scarfiotti, in the 2 liter Dino, was constantly pressuring the 2D.  When Bonnier pitted for Hill to take over, Scarfiotti charged into the lead.  One lap later, Scarfiotti pitted so Lorenzo Bandini gould take over, but Bandini proved no match for Hill, who ran away from the little Ferrari.  By the end of the 16th lap, Hill had built a lead exceeding 90 seconds.  Meanwhile, Parkes was climbing back through the field in the 4 liter P3, but as soon as he handed the car back to Surtees the same problem with the rear suspension reoccurred and the car dropped off the lead lap.
Hill continued his assault on the field, further consolidating the Chaparral’s lead, before handing the car over to Bonnier at the halfway mark.  Bonnier kept the pressure on, and had opened as 3 minute lead on Scariotti and Bandini’s Dino, with the sister car of Ginther and Rodriguez another 21 seconds behind, when he handed the car back to Hill. 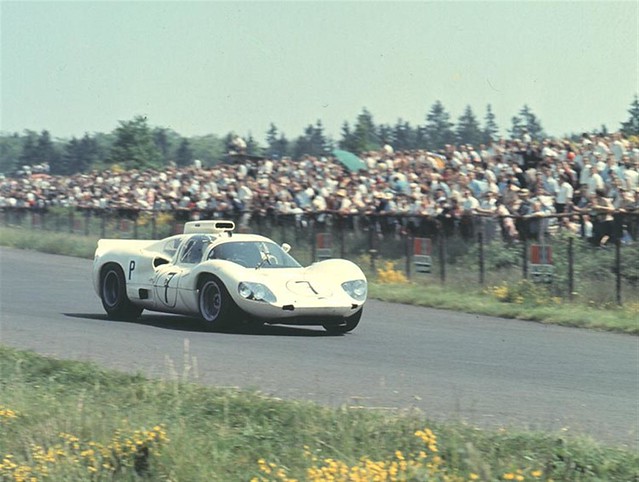 The race had started under sunny skies, but dark clouds were gathering over the circuit and Sharp and the Chaparral team prepared the specially cut Firestones, just in case.  At the end of the 37th lap, Hill pitted.  While the skies had cleared and the sun was shining in the pit area, Hill knew it was raining on the far side of the circuit, and that he’d have to drive through the down pour.  No one was sure how Hill would handle the ribbed tires, or how the tires would handle if the track dried out.  All doubt was erased when Hill increased the lead by 24 seconds in just one lap, opening it further to 96 seconds after only two laps.
Perhaps Chaparral should have been concerned with the windshield wiper, instead.  At first, it only wiped half the screen, then the wiper blade disappeared beneath the scuttle, leaving the wiper arm to flail wildly.  As Hill reached the slow bends at Adenauforst, he opened the gullwing door, leaded out and wiped down the screen…..without stopping.  “I knew I had to do something,” said Hill, “but I couldn’t risk shutting off the engine because the batteries were so small that I was afraid that I wouldn’t be able to get it restarted.  And I could not stop the car because crunching it into gear with the engine running was a definate no-no.”   Phil’s out of car activity, which had been caught by TV cameras, led to the much consternation in the Chapparal pits as the announcers reported that the car had broken down and Hill had climbed out of the car.   Reports of the 2D and Hill’s demise were, however, greatly exaggerated, as Hill roared past the pits moments later to begin his last lap.  He’d bring the mud spattered 2D across the line minutes later, completing the 1000 kilometers in 6:58:47.6.