I’ve never pondered how long I could endure a bus ride, but I’ll tell you the answer is probably lands in the neighborhood of “not very”. For travelers seeking adventure in the late 1960s and early 1970s though, a mega trip was available for the taking. A double-decker bus dubbed Albert ferried passengers between London and Calcutta. If you wanted to press even farther, the bus was then put on a boat and continued on down to Australia before completing its journey in Sydney. From start to finish, you’re looking at a trip of over 130 days.

Literally just finding out about the London-Calcutta bus service which apparently existed well into the 70’s. Wow. 😳😳 pic.twitter.com/VZAHtkbwzD

This incredible route was brought to my attention by Friend of Hooniverse Jim Yu, when he retweeted the above tweet. Jim is actually an avid bus traveler himself, so it makes sense for him to find this and freak out about it.

The story of Albert the bus actually stats down in Oz, not in London. Its first trip started in Sydney on October 8th, 1968. The trip to London took 132 days, with Albert finishing its wild route on February 17th, 1969. Then Albert turned around, to repeat the journey in reverse. Over the course of the next few years, Albert would ten more trips between London and Calcutta. The 10th trip overall saw Albert return all the way to Sydney, and the 11th trip was from Australia back to London to continue with more trips between England and India. There was a 16th trip planned, but the political and revolutionary upheaval in Iran in 1976 put a stop to that.

The cost, at the time, was 145 pounds to get from London to Calcutta. And once on the bus, guests could enjoy a reading and dining saloon on the lower level. The upper deck had a forward observation lounge, and each passenger had his or her own sleeping bunks. There were highlight spots along the journey, shopping days mapped out, and even music available if you wanted to throw a mid-journey party.

My favorite part of the bus though is the signage on the back: 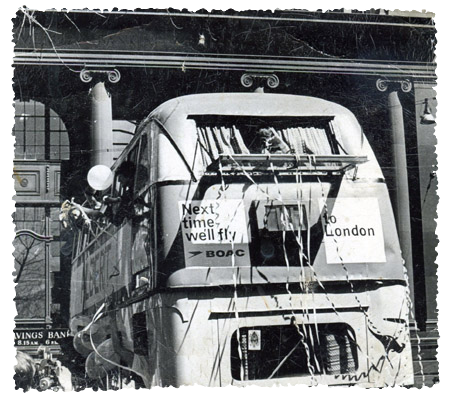 [More images and Info found on High Road for Oz]