In November of 2016 I wrote about the dangers of the use of magnesium in automotive applications. While the article is currently not available due to the still incomplete site update, in has been mentioned in other publications, such as The Drive and GM Authority. I also posted a version of it below. Despite lots of research and substantiated facts within the article, I caught a lot of shit for it. First ones to deny any potential of danger were the automakers. Then people who took high school chemistry ripped me a new one. One so-called lawyer, racer, and social media alpha-male-wanna-be said it was as clickbait. I question if any of those people actually read it.

In May of 2018, the entire production of the Ford F-150 briefly stopped. The reason for it was an explosion (!) at one of its suppliers, Meridian Magnesium Products of America. This company was the sole-supplier of magnesium instrument panel components for those trucks. The explosion injured two employees and started a fire that raged for a considerable amount of time. Ford brilliantly turned this into a marketing opportunity, but that’s another story.

Recently, I was browsing the news. An article from Warsaw, Poland, showed a car fire. Following a minor collision, a Smart ForTwo was fully engorged in fire on the side of the road. Due to the amount of time it took to put the fire out, and entire three-lane artery was closed for some time. The Smart ForTwo’s engine has magnesium components. 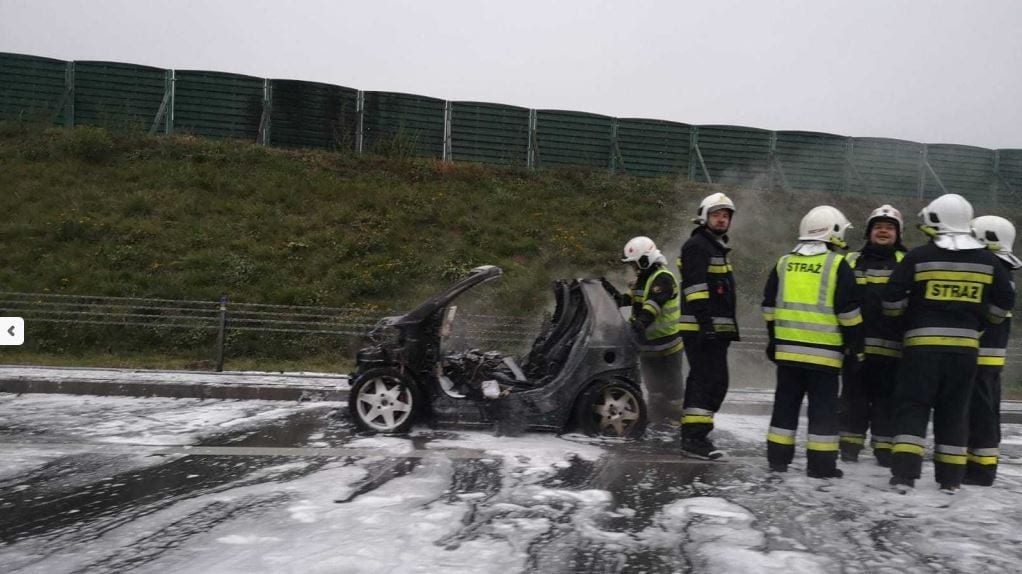 The atypical sparks seen in the picture above are the result of water being poured onto burning magnesium. A magnesium fire burns at a very high temperature, significantly over 5,000°F. That is enough to not only melt steel, aluminum, and iron but also to break down water to its basic elements of oxygen and hydrogen. Hydrogen is a highly-flammable gas. When exposed to the burning magnesium, the gas ignites, further enraging the fire, making magnesium fires very difficult to extinguish.

Combustible metal fires are known as Class D fires. They are best extinguished with sand or dry powders. Water can extinguish it, as long as it is extensive amounts. Cass D fire extinguishers exist but they are ineffective on all other classes of fires and therefore not frequently, or in large quantities, carried by fire departments.

There is good news! Ignition of a solid magnesium structure, unlike magnesium shavings, requires a lot of energy. Chances are that your vehicle is already burning out of control before the magnesium components ignite, and hopefully its occupants have managed to get out before that. Production of magnesium components, especially where shavings are present is a different story.

Below is a copy of my November 2016 Hooniverse article on Magnesium fires in cars: 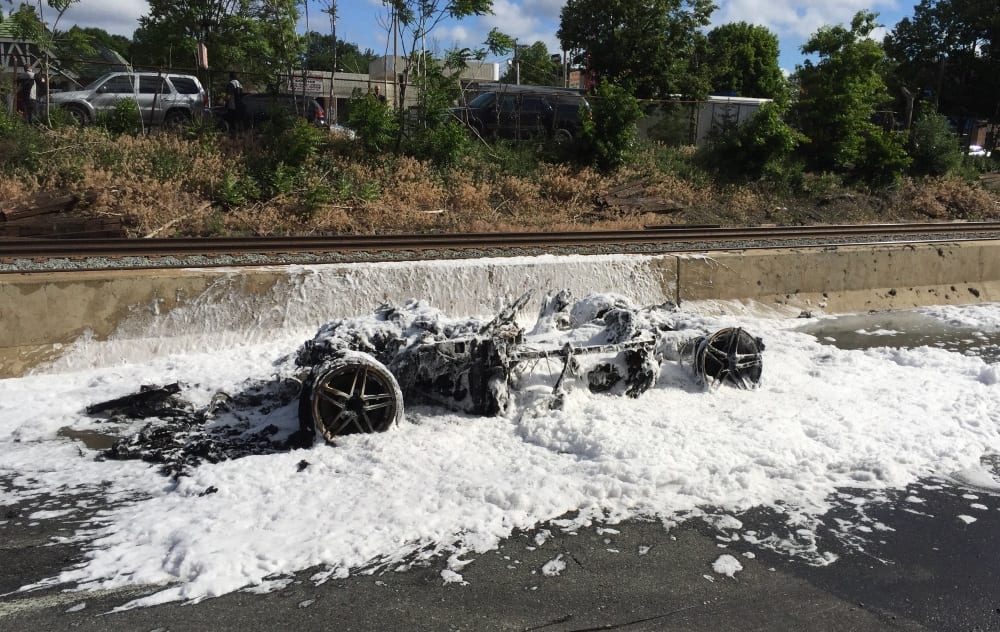 Pictured above are remains of a sixth generation (2005 – 2013) Chevrolet Corvette Z06. The vehicle was involved in what was described as a minor fender-bender on I-90, also known as the Massachusetts Turnpike, in Newton, Massachusetts, on June 13, 2016. No one was hurt and the other car had trim damage and was drivable. Likewise, the Corvette seemed to have sustained just minor damage until its owner noticed an under-hood fire.

In design of the C6 Z06 several weight saving measures were taken to lower its curb weight, most significantly a switch to an aluminum frame. Floors were made of balsa wood and carbon-fiber composite. Under the hood, the Z06 had a huge 7.0-liter LS7 engine with a dry-sump oiling system. To lower the weight in the front of the vehicle, under the engine, the front sub-frame was made out of magnesium. 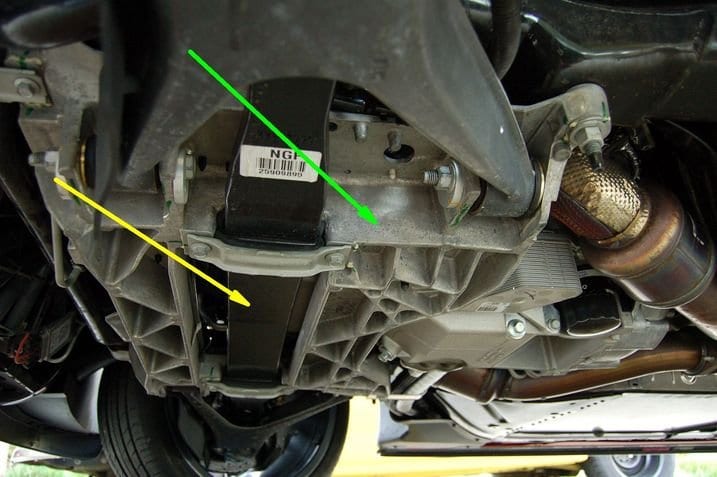 Magnesium and Aluminum are one atomic number apart yet fit into different groups on the periodic table of elements. Both are abundant in the universe and easily formed or molded. Magnesium alloys are thirty percent lighter than aluminum and fifty percent lighter than steel, but not as dense or strong as either of those metals. Over time automakers have developed specific applications for each of those metals. A big limiting factor of magnesium uses are the metal’s flammable properties.

Ignition of a solid magnesium structure, unlike magnesium shavings, requires a lot of energy. Once ignited, however, it burns at a very high temperature, significantly over 5,000°F. That is enough to not only melt steel, aluminum, and iron but also to break down water to its basic elements of oxygen and hydrogen. Hydrogen is a highly-flammable gas. When exposed to the burning magnesium, the gas ignites, further enraging the fire, making magnesium fires very difficult to extinguish with insufficient amount of water. Further, common carbon dioxide (CO2) fire extinguishers will also react violently.

Combustible metal fires are known as Class D fires. The best way to extinguish a class D fire, such as a magnesium fire, is with sand or other dry powders. There are Class D fire extinguishers but they are ineffective on all other classes of fires and therefore not frequently, or in large quantities, carried by fire departments. 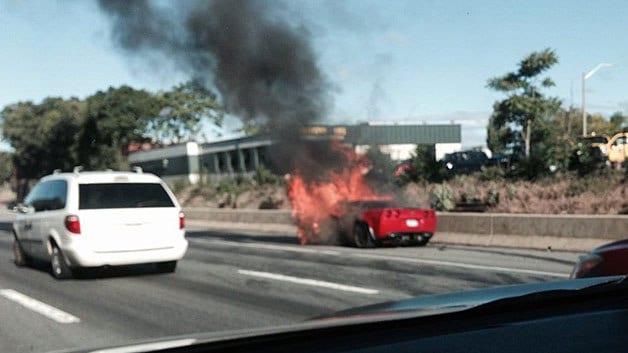 Porsche has probably been using magnesium the longest and currently uses the metal in the Panamera door frames and the frame of the 911 Cabriolet’s roof. The track orientated Porsche 911 GT3 RS has a magnesium roof. Porsche chose magnesium over carbon fiber in this instance because exterior body parts often do not meet the theoretically possible level of weight savings. This is because additional surface films and paint coats are necessary to achieve the desired surface finish. Further, Porsche’s Product Experience Manager, Frank Wiesmann, says that “the high cost of carbon fiber and the high amount of effort regarding the production and paint process in multiple steps, including several levels of polishing, result in carbon fiber pieces for the exterior being very expensive. The magnesium roof is cheaper than a comparable carbon fiber roof, and it is also an estimated 700 grams or 24 percent lighter.”

Chrysler proudly points out that their new Pacifica minivan “will have the highest-volume application of a die-cast Mg closure on the market.” Chrysler is also quick to emphasize that “the material used in the Pacifica’s lift gate inner panel is an alloy, of which magnesium is the primary component. Regardless, magnesium in this form does not pose an ignition risk.  Accordingly, vehicles that contain magnesium benefit from significant weight reduction. The material is commonly used in steering wheel armatures and instrument panel cross-car beams. The Dodge Viper’s cast magnesium dashboard structure is the largest single piece of magnesium in any production car in the world.” 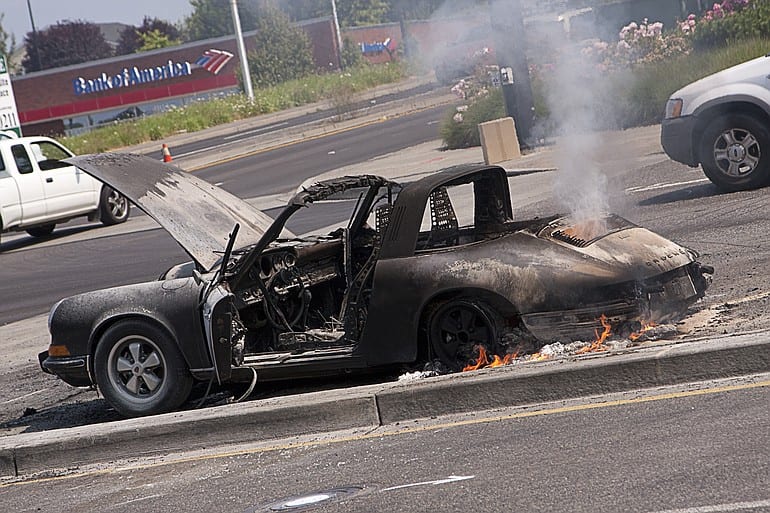 The Code of Federal Regulations, Chapter 49, states the standards for vehicle flammability, but those are limited only to interior materials. The CFR does not mention anything directly that could be found regarding combustibility of chassis metals. There are however many first responder resources on how to deal with flammable metals, hybrid batteries, electrical propulsion, airbags and airbag inflators, and many other components currently incorporated into automobiles.

The Society of Automotive Engineers (SAE) develops standards for both the automotive and aviation industries. On August 14, 2015, the SAE published SAE AS8049 Revision C. The revision to the document was based on the Federal Aviation Administration’s Technical Standard Order (TSO) FAA TSO-C127b, a minimum performance standard. SAE AS8049 Revision C replaced “Magnesium alloys shall not be used” wording regarding seat frames with “Magnesium alloys may be used in aircraft seat construction provided they are tested to and meet the flammability performance requirements in the FAA Fire Safety Branch document: Aircraft Materials Fire Test Handbook – DOT/FAA/AR-00/12, Chapter 25, Oil Burner Flammability Test for Magnesium Alloy Seat Structure.” In its testing, the FAA found that the aircraft grade magnesium alloy materials used for seat frames performed as well or better than aluminum. Magnesium is widely used in jet engines, landing gear, and other forged components.

Car fires are not uncommon and, despite what WreckedExotics.com shows, no one vehicle is more susceptive than any other. The U.S. Fire Administration reports that there was an average of 210,000 car fires per year over the last ten years, or over 575 per day. There is no one determination to the causes of these fires but it should be no surprise that the delicate balance of a very hot engine, electronics, and flammable liquids all cramped into the engine bay can be easily upset in the smallest of accidents. The good news from the administration is that the number of cars fires has been declining over the years. 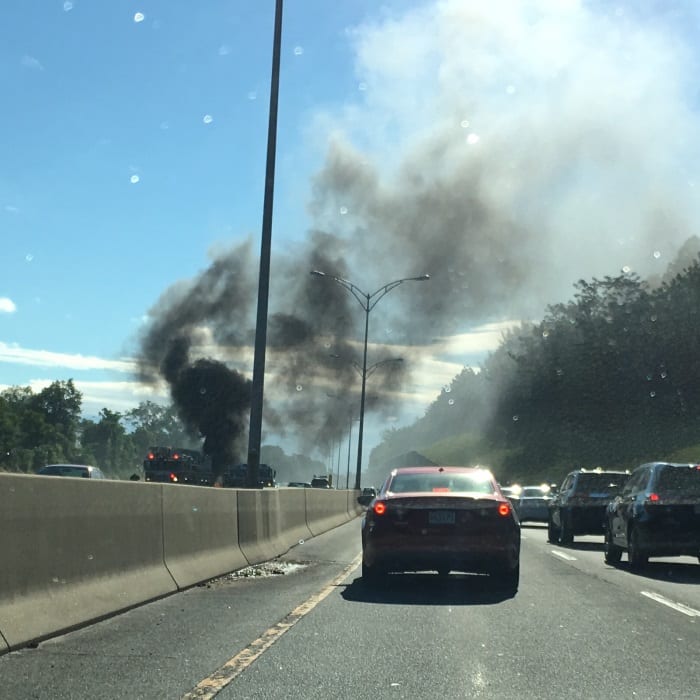 It is unknown what specifically started the fire in this Corvette but it quickly engulfed the whole car sending dramatic smoke high up into the morning New England sky. When the fire department arrived they had surprising difficulty putting the fire completely out. Pooling of melted metal, which was on fire, believed to be magnesium was observed under the car. The fire department used two tanks of water, over 1000 gallons, and class B foam to finally put it out. That is about twice as much as on a conventional car fire.

Each year automakers are being forced to make more economical cars, which is best accomplished by weight reduction. The use of magnesium alloys in automobiles will therefore likely continue to increase. Magnesium has lower manufacturing costs than aluminum but with increased production, material costs are likely to go down. Magnesium’s only downside seems to be its flammability property, which automakers insist is not an issue in automotive applications.