My last go-around with the Lexus IS series wasn’t great.  More about the circumstances than the car itself.  I had an IS200t RWD on Summer performance tires show up in early December of 2016 when it snowed. 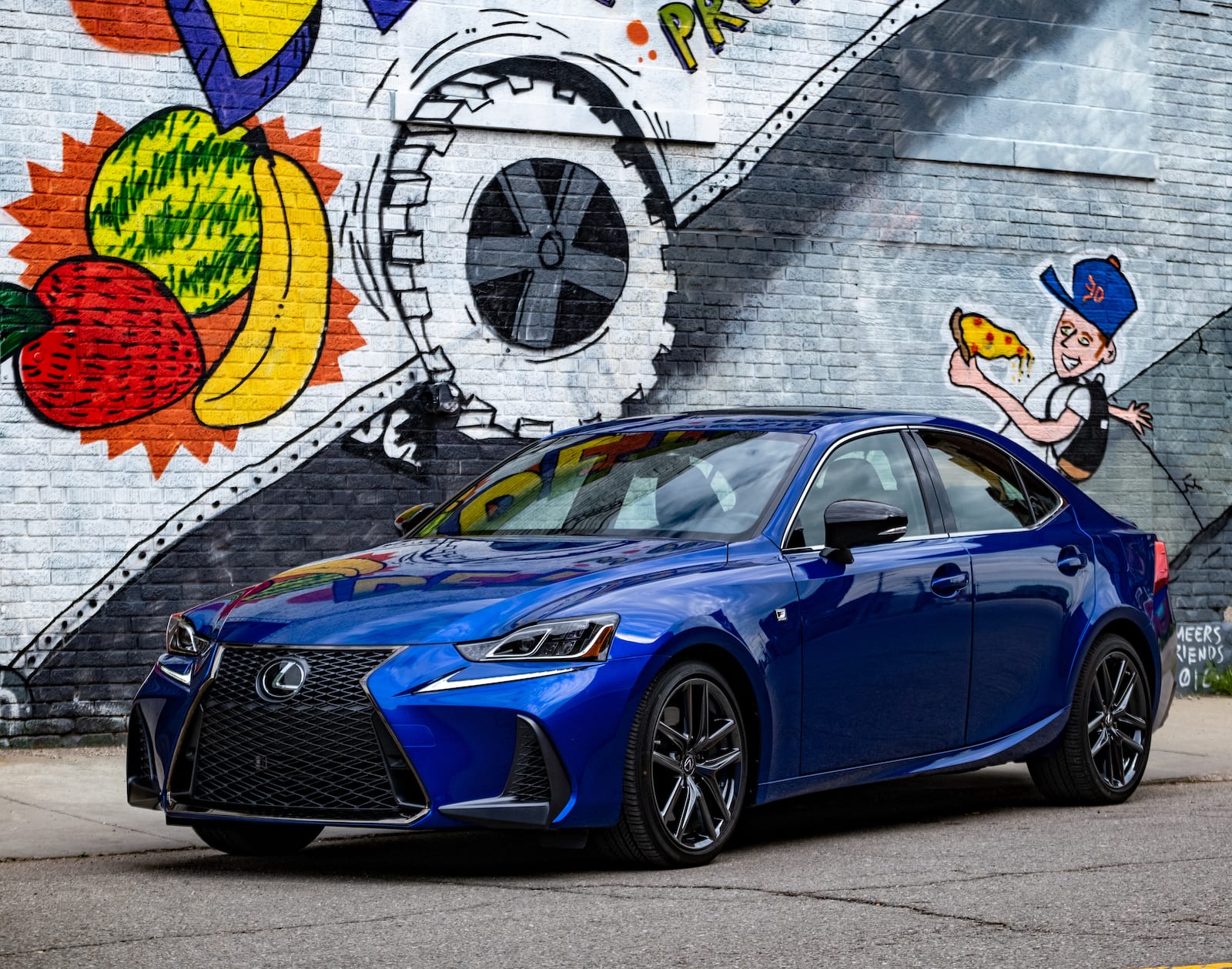 The car was undrivable.  That is not hyperbole.  The traction control was so overwhelmed that it was stuck in the middle of Woodward Avenue. I was going nowhere.  Just breathing on the throttle set the TC light blinking like it was Christmas.  Turning off the TC didn’t offer much help.  It did allow me to get moving, just, but what should have been a five minute run to the store took almost twenty with a lot of pissed off traffic around me.

That is what I remember about the week I spent with that car, not much else.  So, when this IS350 AWD arrived, I had few expectations. 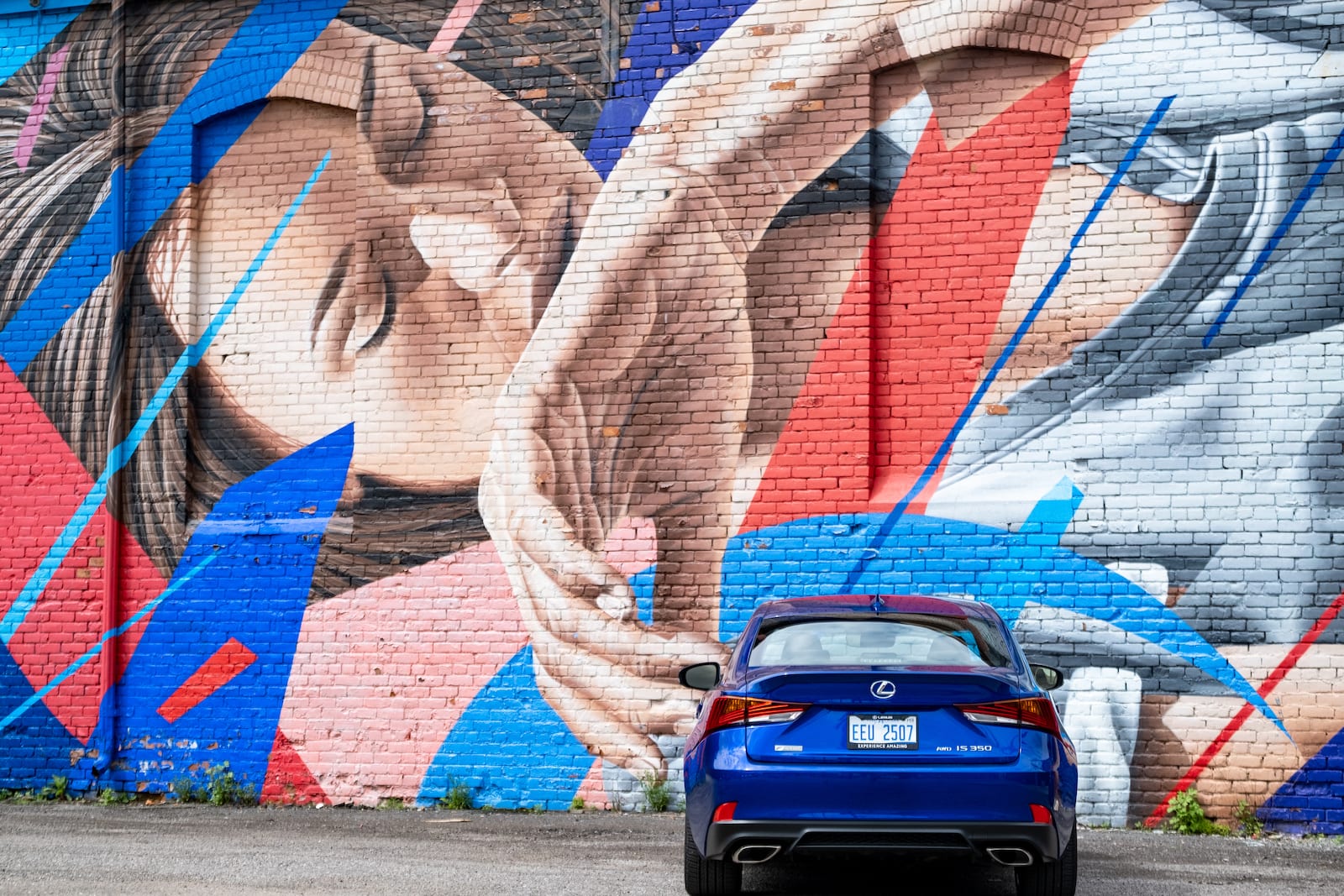 First impressions from the walk around were good.  The Ultrasonic Blue Mica paint really stood out.  In a sea of grey, silver and black vehicles, and the fifty variations on those unimaginative colors, it’s nice to see a color that really pops.  The overall lines of the IS are attractive as well.  While many are not fans of the current Lexus grill design, on this car it looks good.  It is aggressive and purposeful. There are enough curves and creases around the wheel arches, hood, and decklid to give it a look that doesn’t present as “of the moment”.  I’m not saying this is a timeless design, not at all, but it has enough classic design elements that it should age well. 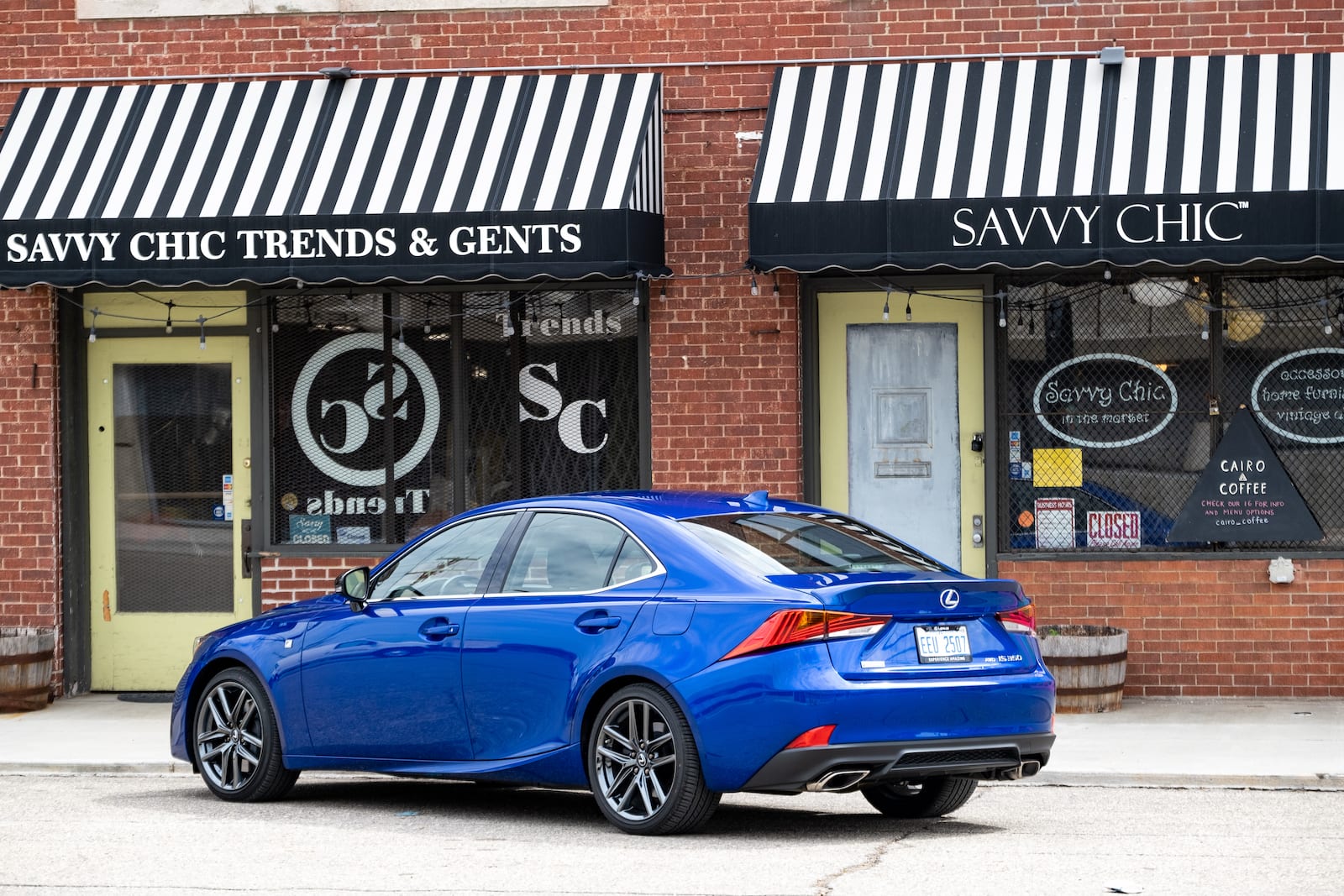 As this test vehicle came with the $2,905 optional F-Sport package, most of the chrome is replaced with black trim, or what Lexus calls “Black Vapor Chrome Trim”. It made the blue pop just a little more than the sea of chrome would have.  Again in this color combination, the car stood out in a good way.  I found it attractive.  Other than the LC it is probably the most attractive Lexus in the lineup.

Sliding down into the IS350, a nice change from going up into all the crossover and SUVs of late, and it feels as if you’ve slipped into a cocoon. The cockpit is almost entirely made up of black materials.  That color choice along with the high sills of the window and the tall cowl really give you a bunkered in feel. Of late I much prefer lighter colors in interiors for a more open feel, but that is a style preference rather than substance issue. 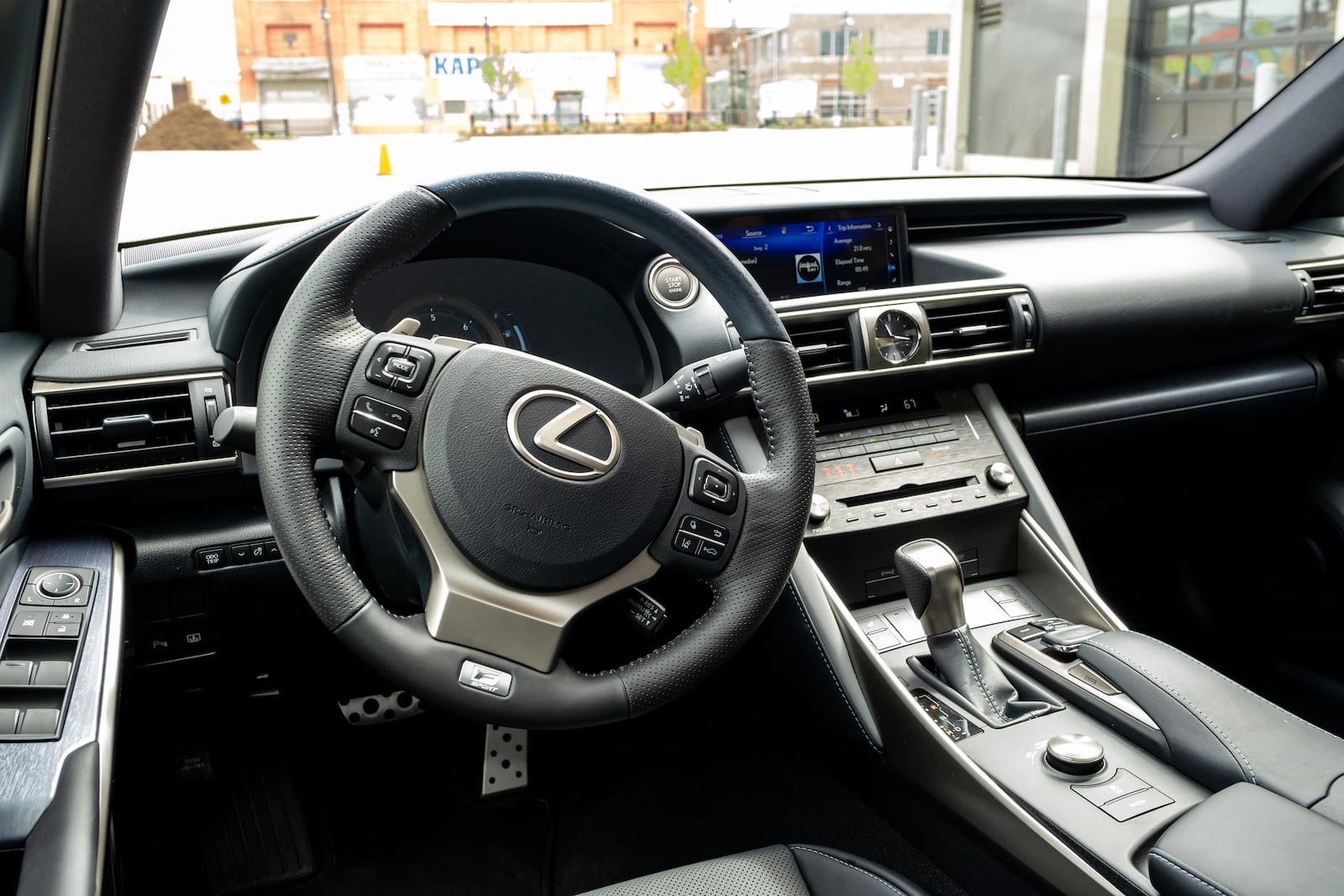 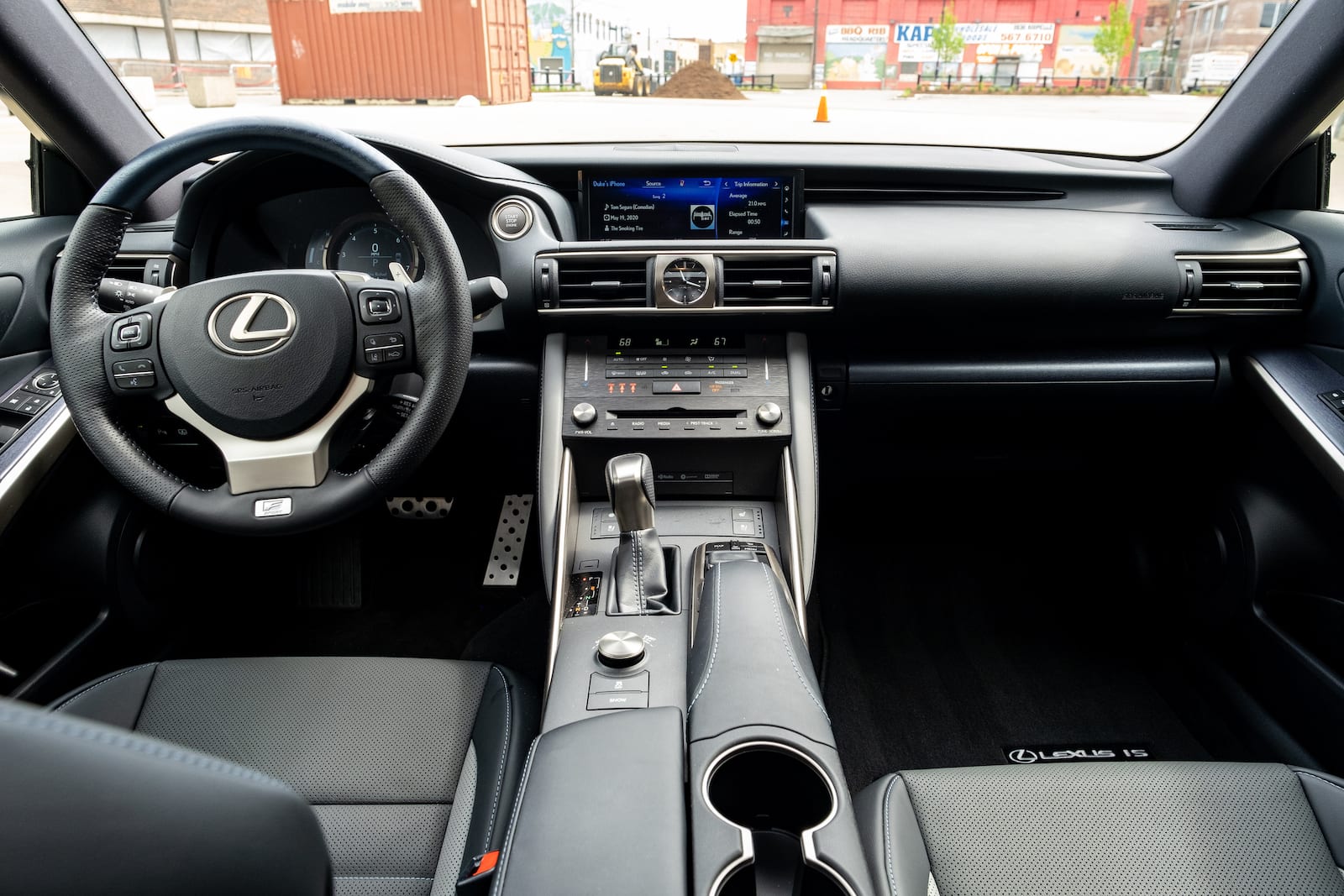 Being a four-door, you would hope that the rear seats could accommodate full-size adults, and the IS350 does.  I am 5’10” and was able to sit very comfortably behind myself.  I would say if the driver was much over 6’1” it might get a little tight.

The stereo system was more than good enough for the people who would buy this IS.  It was the standard ten-speaker system and not a Mark Levinson system.  For those who are listening to NPR, talk radio, podcasts or streaming music it is fine.

Where the IS begins to show its age is its technology and infotainment package.  While I had no issues with the screen size the resolution is not as sharp as newer vehicles.  The Lexus mouse is frustrating to use because it can be both very sensitive to some movements yet not at other times.  There is no Apple CarPlay or Android Auto, though that is something I care about less and less as time goes on.  For most people they want it and I get it, but for me it’s minor. 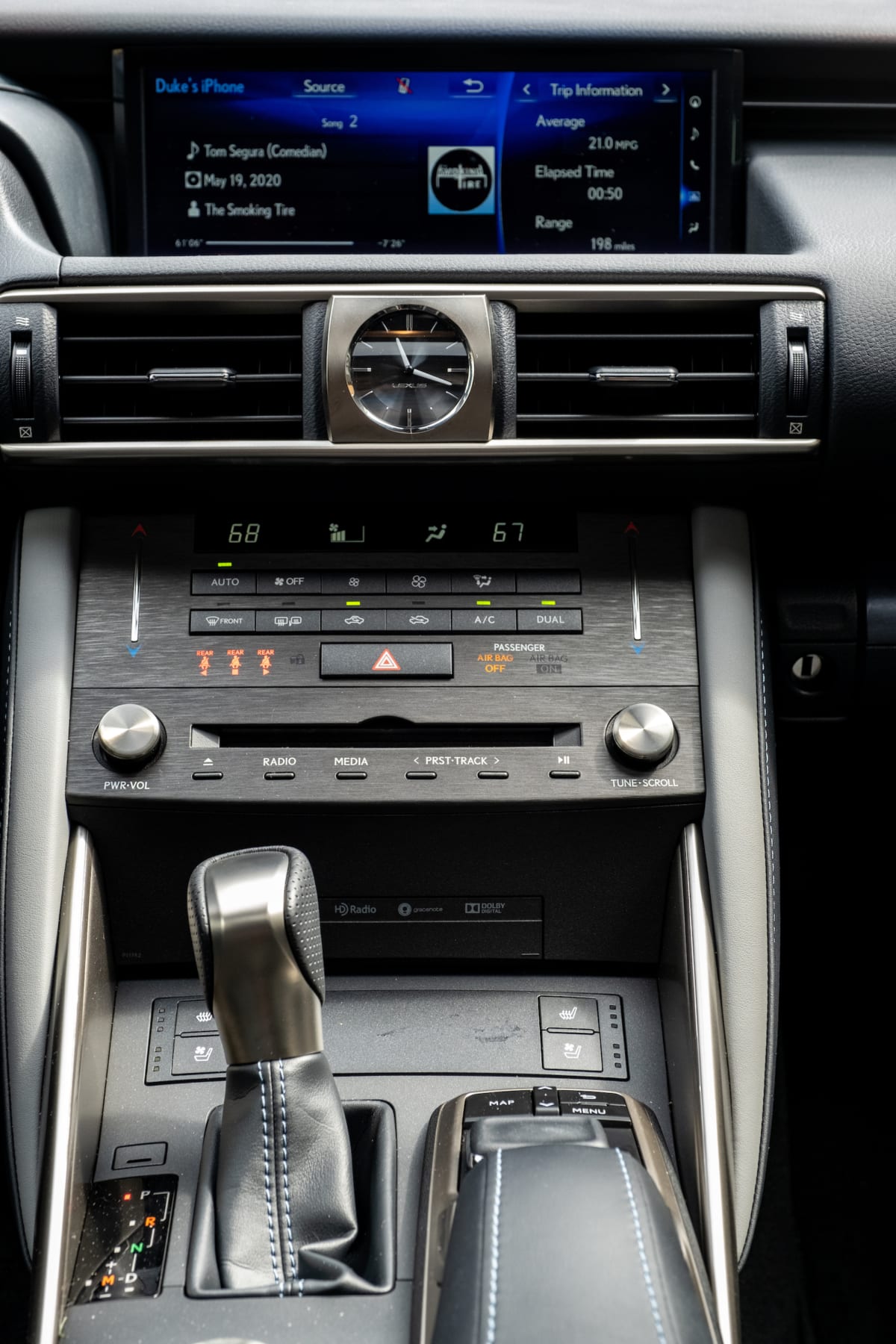 What I did find incredibly frustrating, and where we have seen rapid development, is with radar cruise control.  At 75-80 miles an hour on the highway, even at it’s closest setting the IS kept well over 80 feet between it and the vehicle in front.  If you want to visualize that, it was more than a full semi length (the truck and the 53-foot trailer).  On the highway, most people adopt the Senna philosophy “if you see a gap and do not take it you are no longer a racing driver”.  All this does is keep pushing the IS further and further back continuing to slow the vehicle.  Also going around curves on a highway would occasionally produce false positives, seeing a vehicle in another lane and slowing down.

One minor gripe, the rear doors do not have proximity locks for the keyless system.  If you want to drop something onto the rear seat or place it in the footwell, you have to open the front door first then unlock the back. 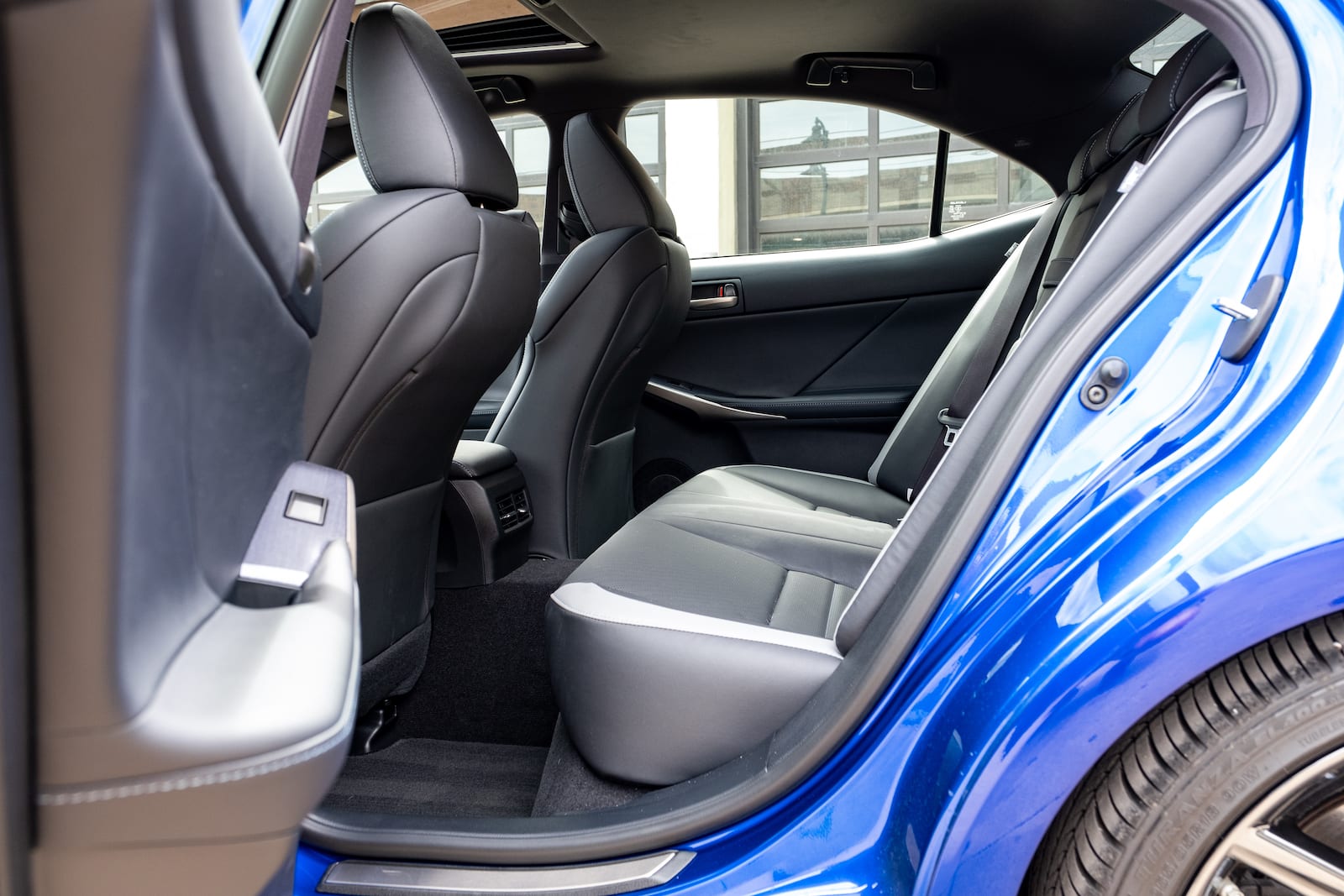 The current generation of the IS has been in production since 2013. It was refreshed in 2016, so that explains some of the reasons why it lags behind in this area.

On the road, I have very few issues with this IS. It was quiet. It rode very well.  And, when pushed as much as you would push a vehicle like this on to on-ramps and off-ramps it was composed.  Acceleration from the 311 horsepower 3.5-liter V-6 is more than adequate.  The IS shows it’s age in that it comes with a six-speed auto rather than the eight to ten-speed boxes that are now de rigueur.  Acceleration may have been helped a skosh by more gears, but not that you’d notice. 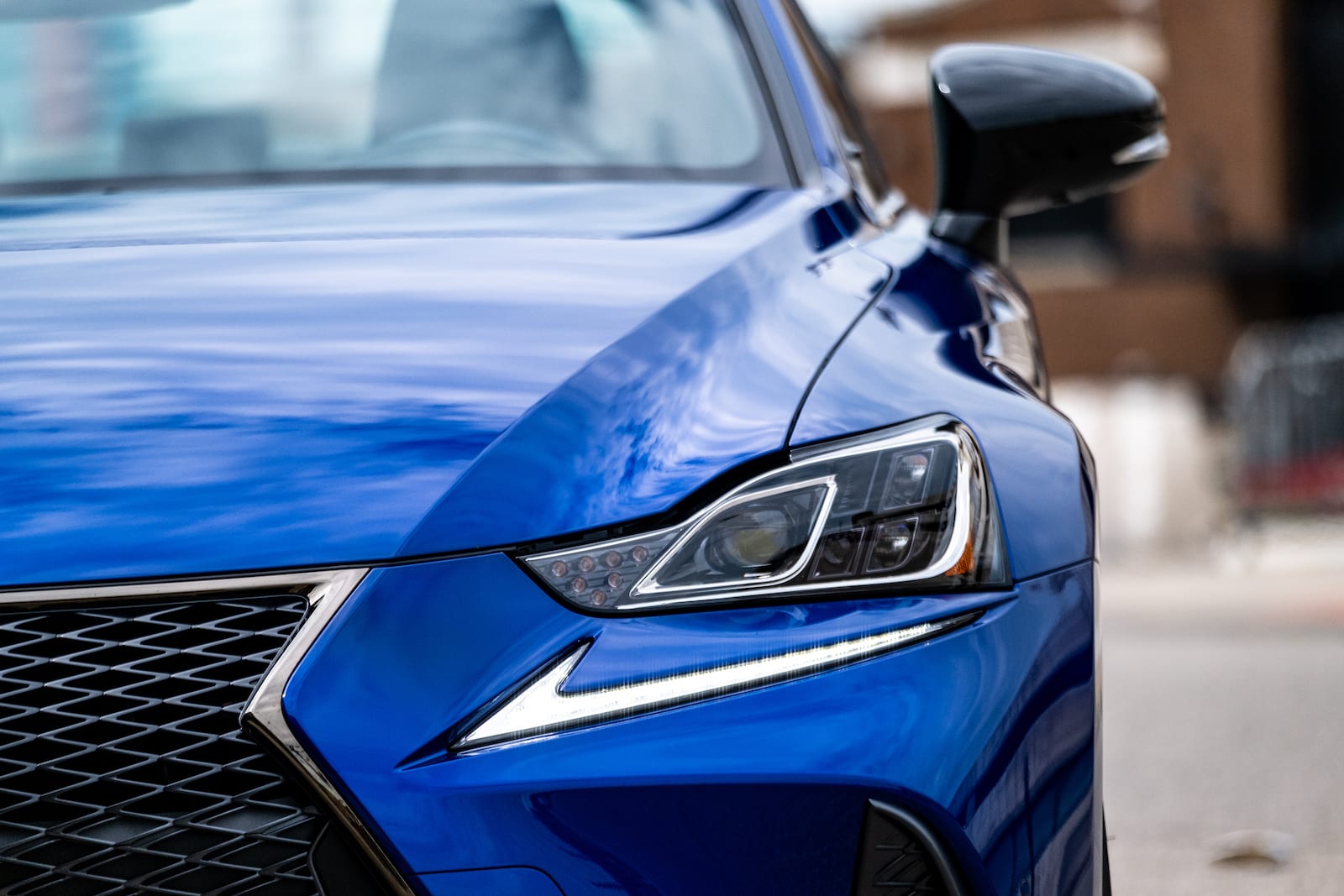 The optic I used for driving dynamic was not that of a sports sedan, rather a luxury sedan with sporty stylings.  Had this been the old IS-F, truly a MAGNIFICENT car, I’d hold it to a different standard.

Where a more modern transmission would help the IS is fuel economy.  While fuel economy isn’t bad, it also isn’t great.  EPA estimates are 19 city, 26 highway and 21 combined.  The numbers I pulled down were about that, although on one extended highway run I was able to get an indicated 28 mpg.

I call this IS350 a ninety percent solution. The reason is, for ninety to ninety-five percent of the people who are looking for a sporty sedan, this is exactly what they are looking for.  For those that are looking for a true performance sedan, it’s not, but they aren’t shopping here anyway.  What most people are looking for is something that looks good, drives well, is comfortable and reliable enough that they don’t have to worry about it.  In that light the Lexus IS350 AWD delivers.  It is a vehicle that you buy or most likely lease and then focus on other things.  It’s enjoyable to drive, but not so hard-edged that you have to apologize to anyone riding in the car that isn’t an enthusiast.  As tested this example was $53,599 and I’d call that very fair value for money.  If someone asked you to recommend a sporty looking sedan, but wasn’t an enthusiast, the IS would be a great choice. 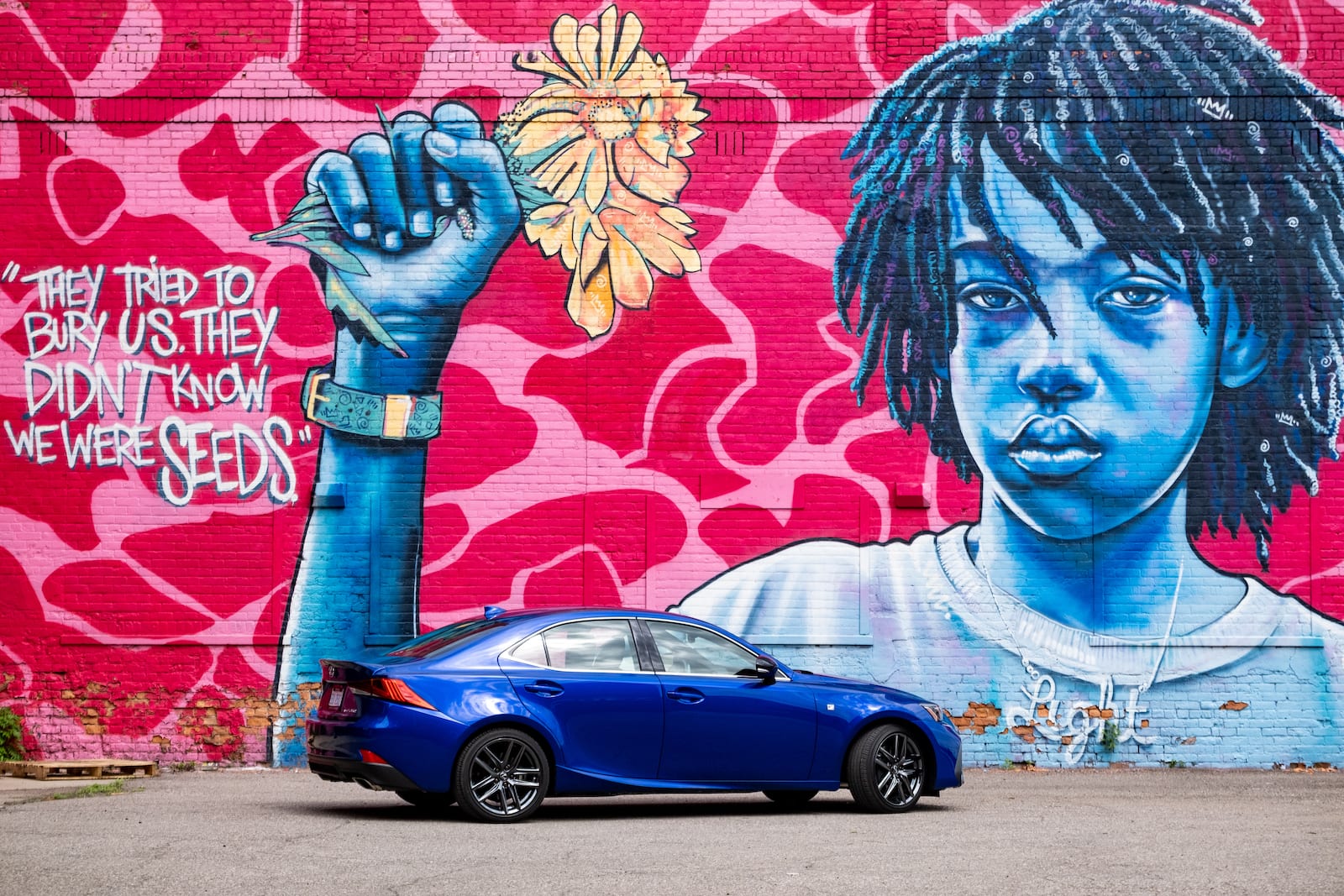