It’s been a harsh winter here in the Midwest. We average 18 inches of snow annually and this year has seen 30 inches of the white stuff. Spring has finally shown up and we’re itching to explore.

After the front axle rebuild last Spring, #TheLandYacht hasn’t needed many reliability repairs. I finally spent some $$$ on modifications that were for aesthetics and usability.

The new cupholder install has been life-altering. The 1994 Land Cruiser has a square cupholder that sits near the driver’s right hip and then a Grand-Canyon-sized space in front of the center console that contains the drinks after they spill but does nothing to stop them from spilling. The cupholder I purchased is 3D-printed and made of durable plastic. It fits perfectly and holds my coffee thermos and soda cans well. My only complaint is that it only comes in tan or gray, and neither one matches the chocolate brown of the interior. It is nice to have two more cupholders.

I installed rain guards on all four roll-down windows. Not too fancy, but nice to not have to worry about rain getting in when the windows are cracked.

Before our Flint Hills trip, we installed the snorkel. They really are for looks. Yes, snorkels are functional and helpful when fording high water, but we just don’t have that much high water locally. The kit we used was a knockoff of the more expensive versions, but several the local Land Cruiser owners have used this kit previously. I met up with one of the local guys who has installed a couple of these before. When it came time to cut the hole in the fender, I did it. I relied on his expertise getting it all lined up correctly before the drill even had power.

I do not expect to be plowing through water or mud deep enough to need a snorkel. This install is really a “break in case of emergency” mod. It might be five to ten years in the future before I’ll need to use it, but it was simple and cheap enough to get it installed now. Also purchased were materials to extend my differential breathers, which I will do before pursuing any more water crossings.

My oldest son and I tested out our new features during a weekend trip exploring the Flint Hills. The early morning rain storm made our weekend look like we spent way more time off-road than we did. The damp, wet, and greasy roads seem to help the Land Cruiser collect mud as we went. 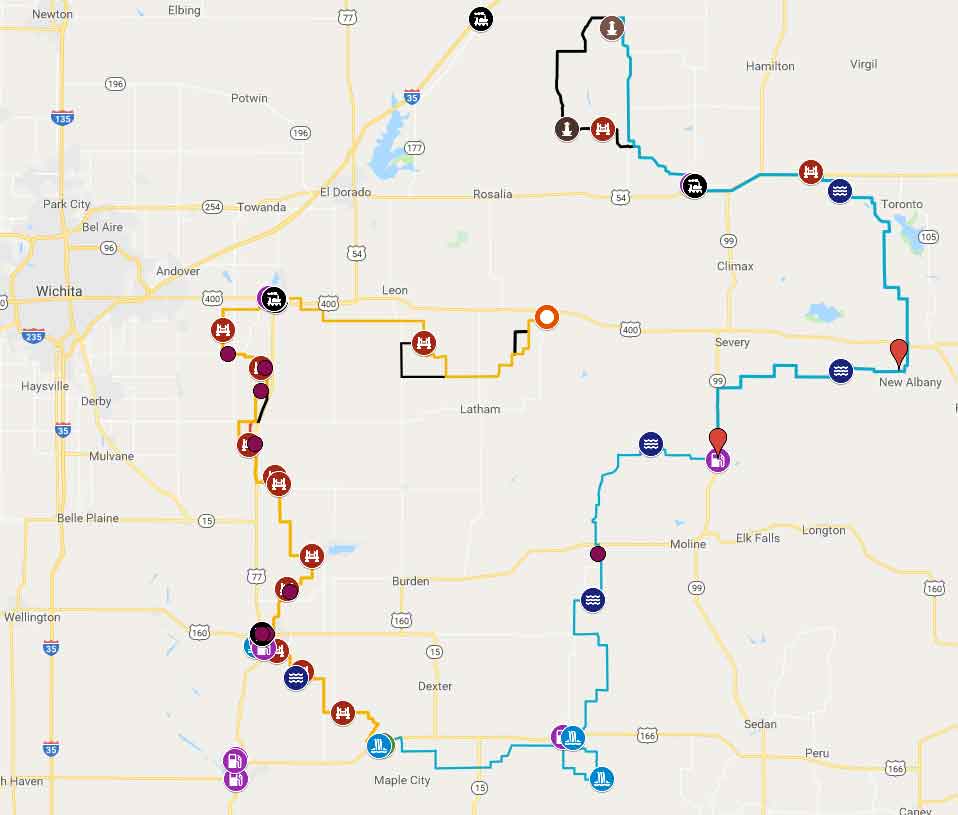 We met up with a group of 16 vehicles for the local overland group. While we were the only 80 Series Land Cruiser, there were three 100 Series, a 5th-gen 4Runner and a first-gen Tacoma. Also attending the trip were two Wrangler TJ’s, a newer GMC Sierra, a Land Rover Discovery LR4, a Chevy Colorado ZR2, and a 1980s Toyota pickup that had been lowered. Quite a range of vehicles, which is one of the reasons I like to travel with this group. Everything is very low key and brand loyalty doesn’t become a point of contention. Even though our local Land Rover enthusiast has been pushing me hard to join him and the dark prince, Lucas electrics. I will eventually, but it’s going to be a Range Rover Classic. Someday.

The Land Yacht handle the backroads and minimum maintenance roads with ease. Nobody really had any trouble, and it was very fun watching the lower Toyota splash/slide his way through everything. That little truck is a beast.

Being that it was only the two of us on this trip, I pulled the rear seats and used the truck itself as our tent. I’ve done this once before on a trip to the salt flats in Oklahoma. It’s really quite comfortable. Set up takes place in as long as it takes you to roll out the sleeping pads and bags. Thanks to the new rain guards on the windows, they can be cracked enough that condensation wasn’t an issue. Even with the heavy dew and some rain during the night, we woke up in a warm dry vehicle. This had me to start the search for an 80 series camper conversion for the roof. There are very few options and they are all crazy expensive. I’ll buy a van before I buy a camper conversion.

We did encounter a decent waterfall at our camping spot, which was unexpected.

The only other nature we ran into was a water crossing on the morning of our second day. Limestone covered the bottom of the creek and it was solid and flat. Our fearless leader navigated it first since he was the closest to the front and possessed a winch. We followed him. The crossing was straightforward, and my Florida Jeeping days came back when we got to the far bank and probably used too much power to get out. But we made it and the look on my son’s face was worth it to me.

I gave my camera to my 10-year-old to shoot with. We now have 120 images of cows. He wanted cow pics and that’s what he shot.

He did get the only picture I could find of our friend’s rescue dog, who is definitely part Coyote or Wolf.

It was a great weekend of “roaming” around Kansas. My phone loses its cell signal a lot. I can still make phone calls and Google Maps still works, but the rest of the phone does nothing. Having the phone be just a phone is nice. I’m already itching to get back out to the mountains. Colorado is calling. Or maybe it’s Arkansas? So many options.