The secret compartments of the Land Rover Discovery

The third generation (or fifth, depending on how you count) of the Discovery has been with us since 2017. This is the first time that I’m spending time with it and a full review of the diesel version will be posted soon. While I’m still getting familiar with the new Disco, one thing has really stood out to me – the amount of hidden compartments in the darn thing.

Like all other current Rovers, Disco’s dash was designed with a modern, clean flair. Flat surfaces covered in high quality material and the minimum of anything exposed to the eye. But this slick dash holds a few secrets.

First is the glove box. There is nothing atypical about it – pull the handle and it drops down. But there is more to it. 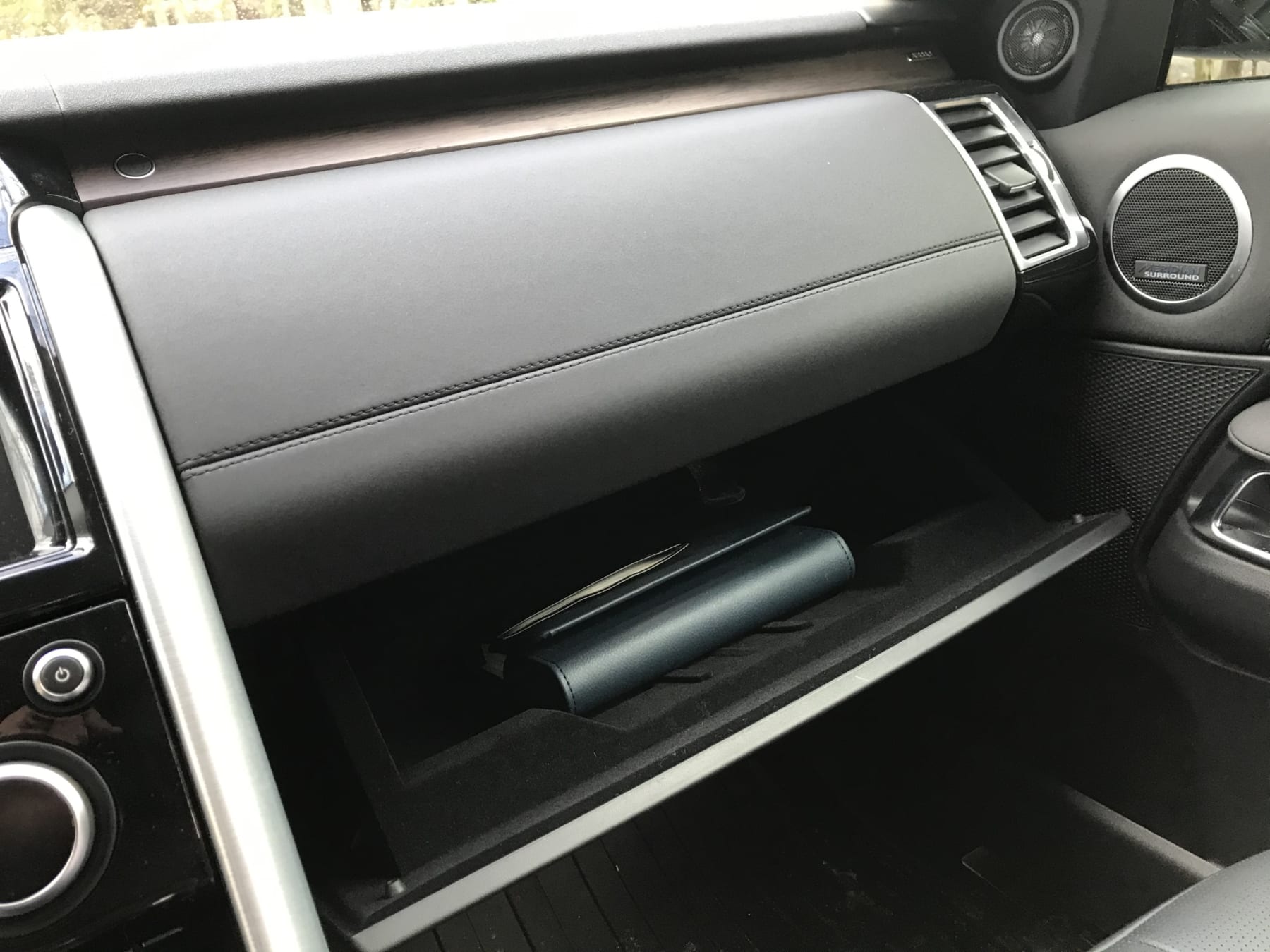 Pressing the rather random button above the glove box, next to what can be described as a dash piece covering the airbag, exposes a second glove box, above the first glove box. And this glove-box even has a handy 12v charger. Great place to stash your radar detector when it’s not in use. 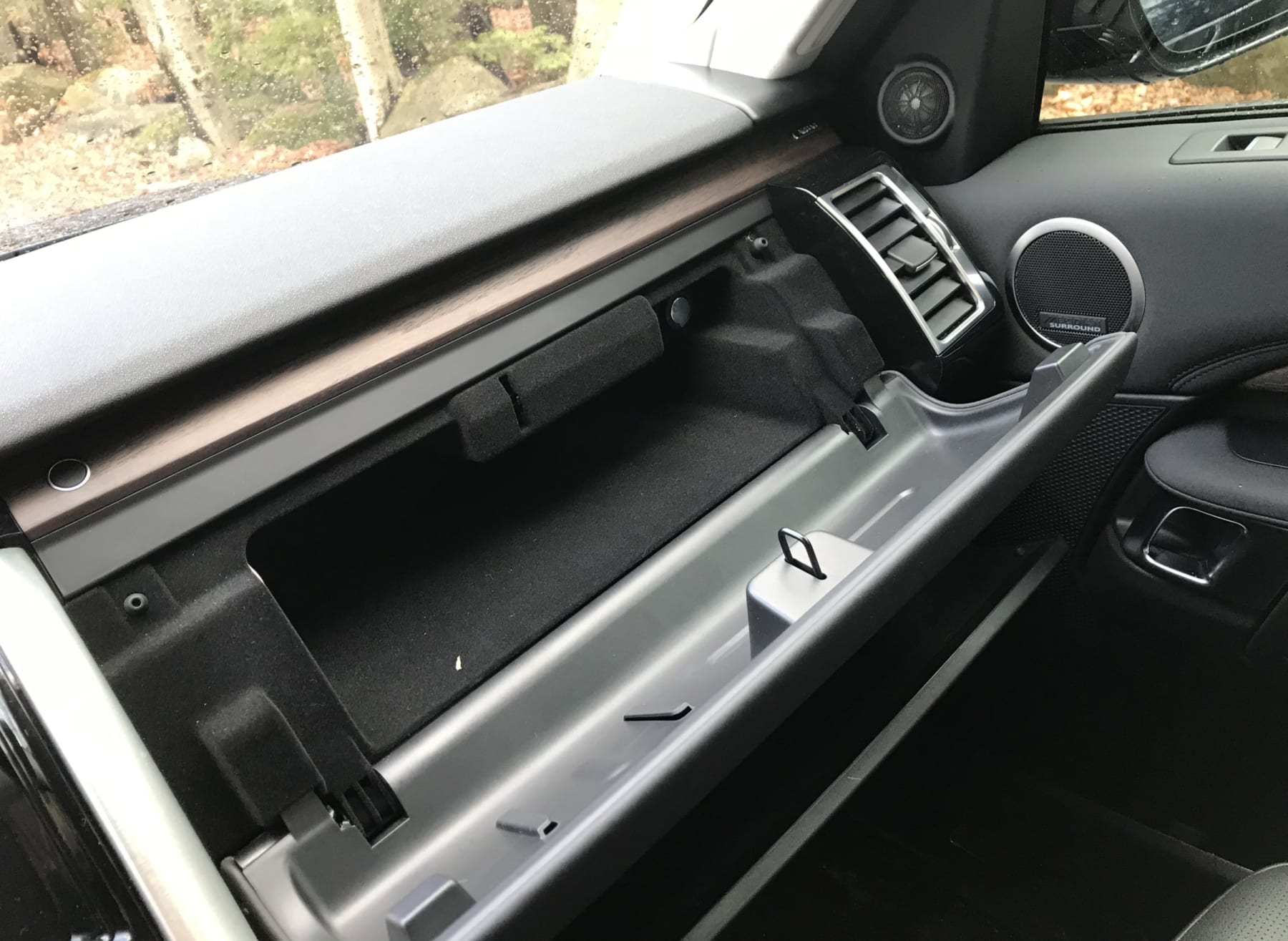 The center console lid does not seem to be special at all. But it is… 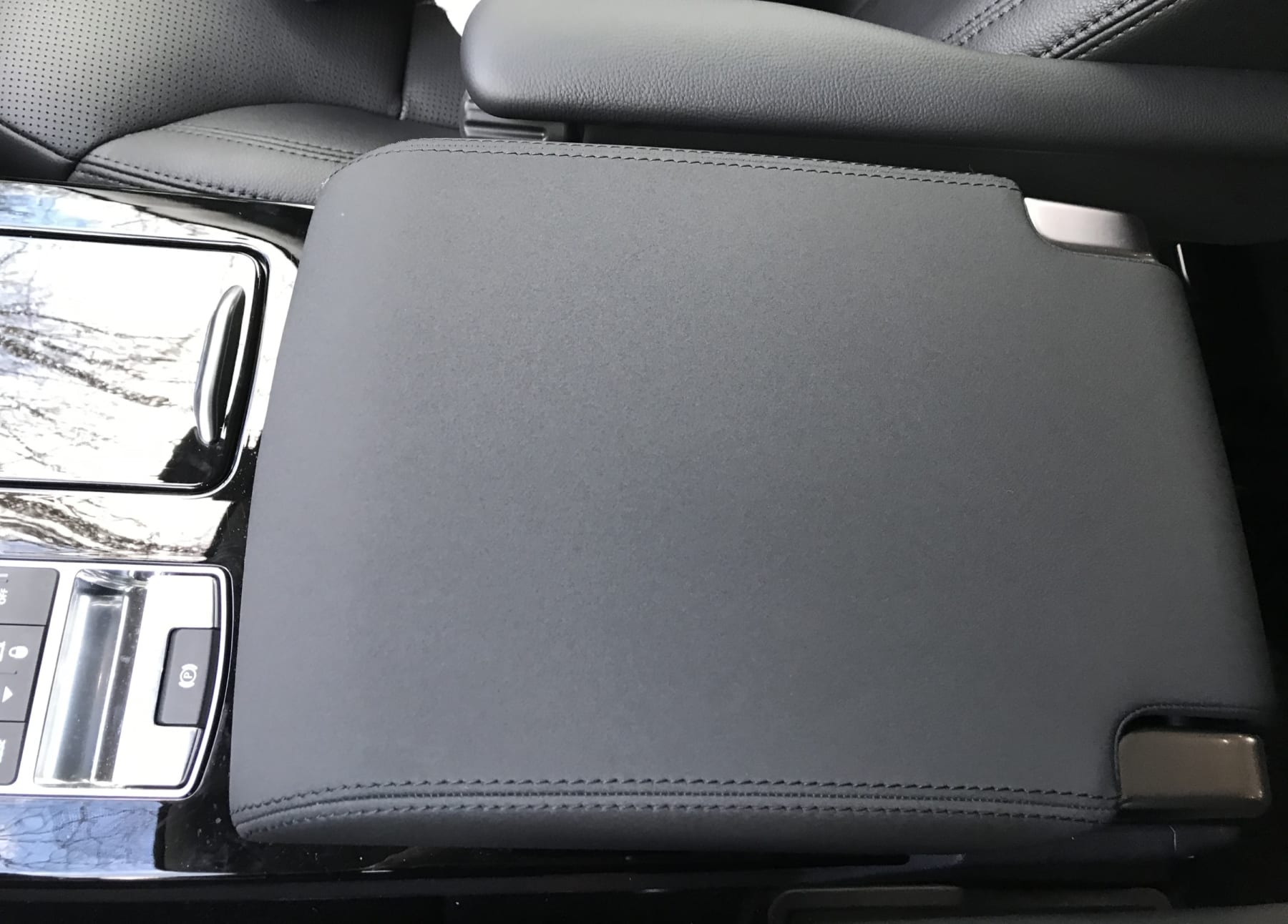 Lifting the center console lid reveals the USB chargers and an area to stash a wallet, garage keycard, or something of that size. It’s a good place to keep a cellphone and use the Disco’s Apple CarPlay or Android Auto for less distracted driving pleasure.

But this too is tricky.

The center console lid flips 180 degrees and turns itself into a little table for the rear seat passengers. Neat. 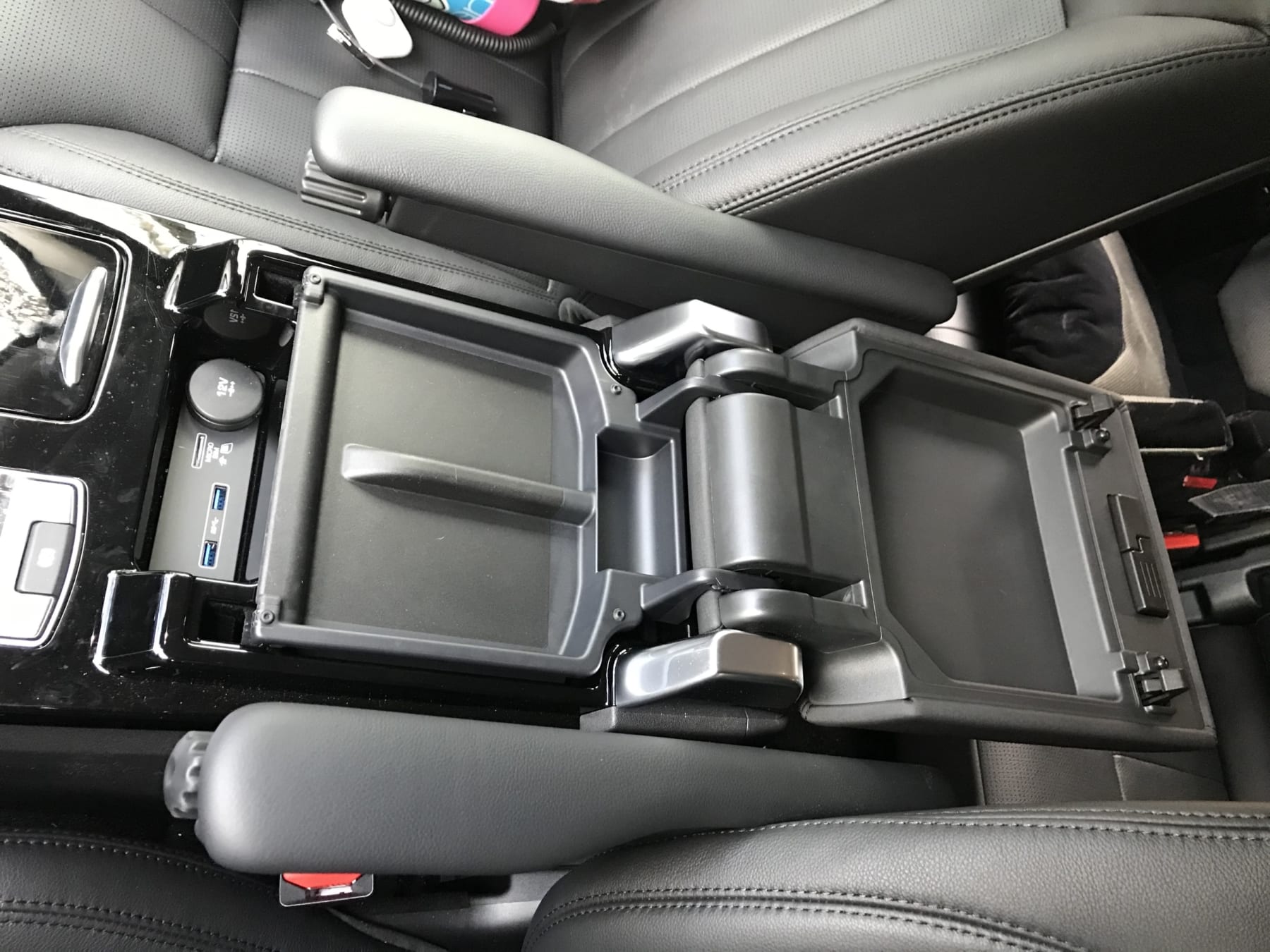 Open the center armrest using a different latch, and a much bigger, sealed center compartment is revealed. This compartment has an odd white lining and a switch in it. That’s because it’s servers double duty as a mini fridge. While perhaps it won’t keep your meat fresh over long periods, it will keep your drinks cool on a long summer drive. 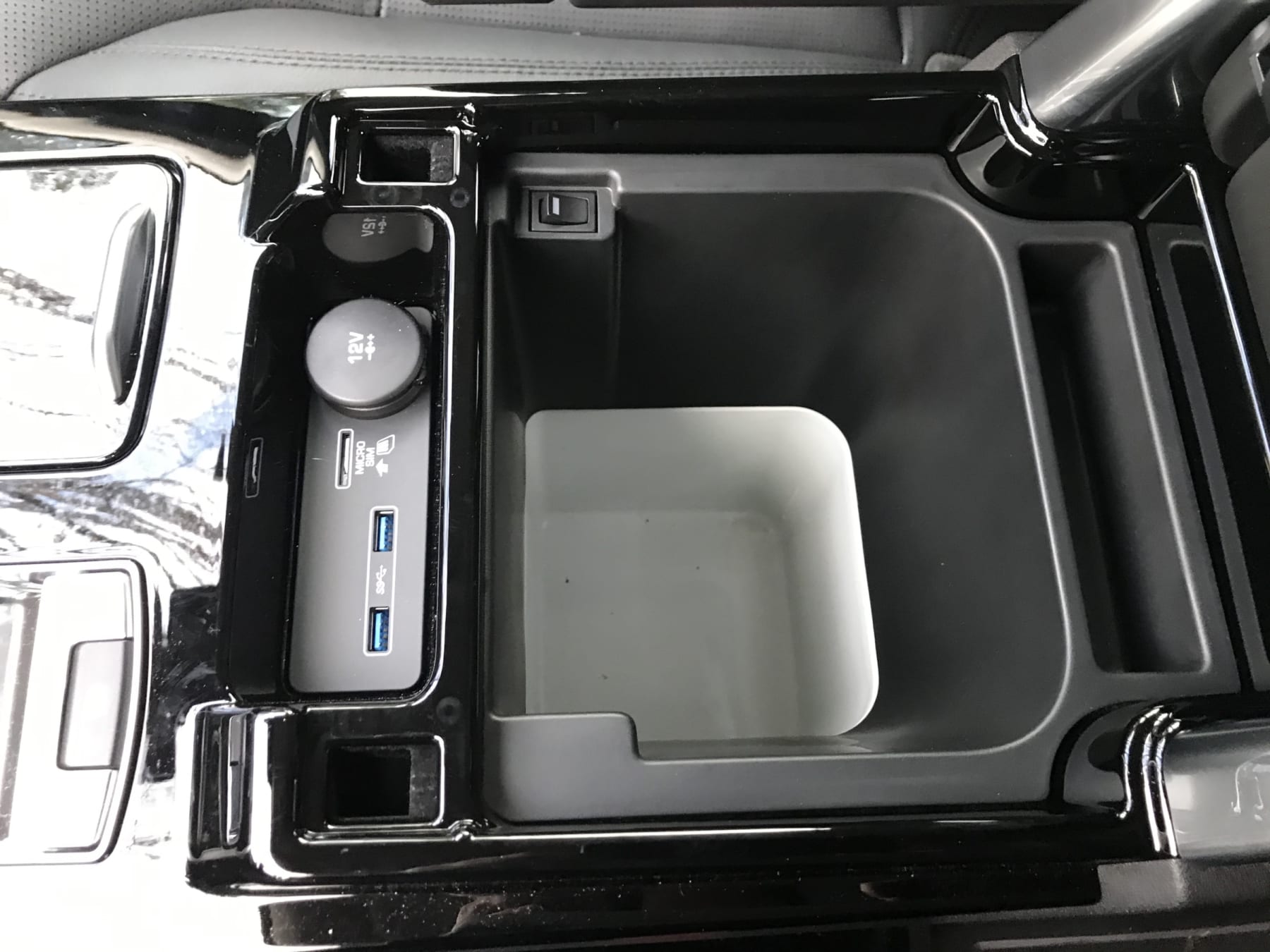 The center part of the dash is occupied by a large, 10-inch touch screen. Under the touch screen are three knobs for HVAC and heated seats controls. There a too-small volume knob, too on the right. Below that is a deep open compartment with a 12v socket in it – certainly handy for smaller, frequently used items. 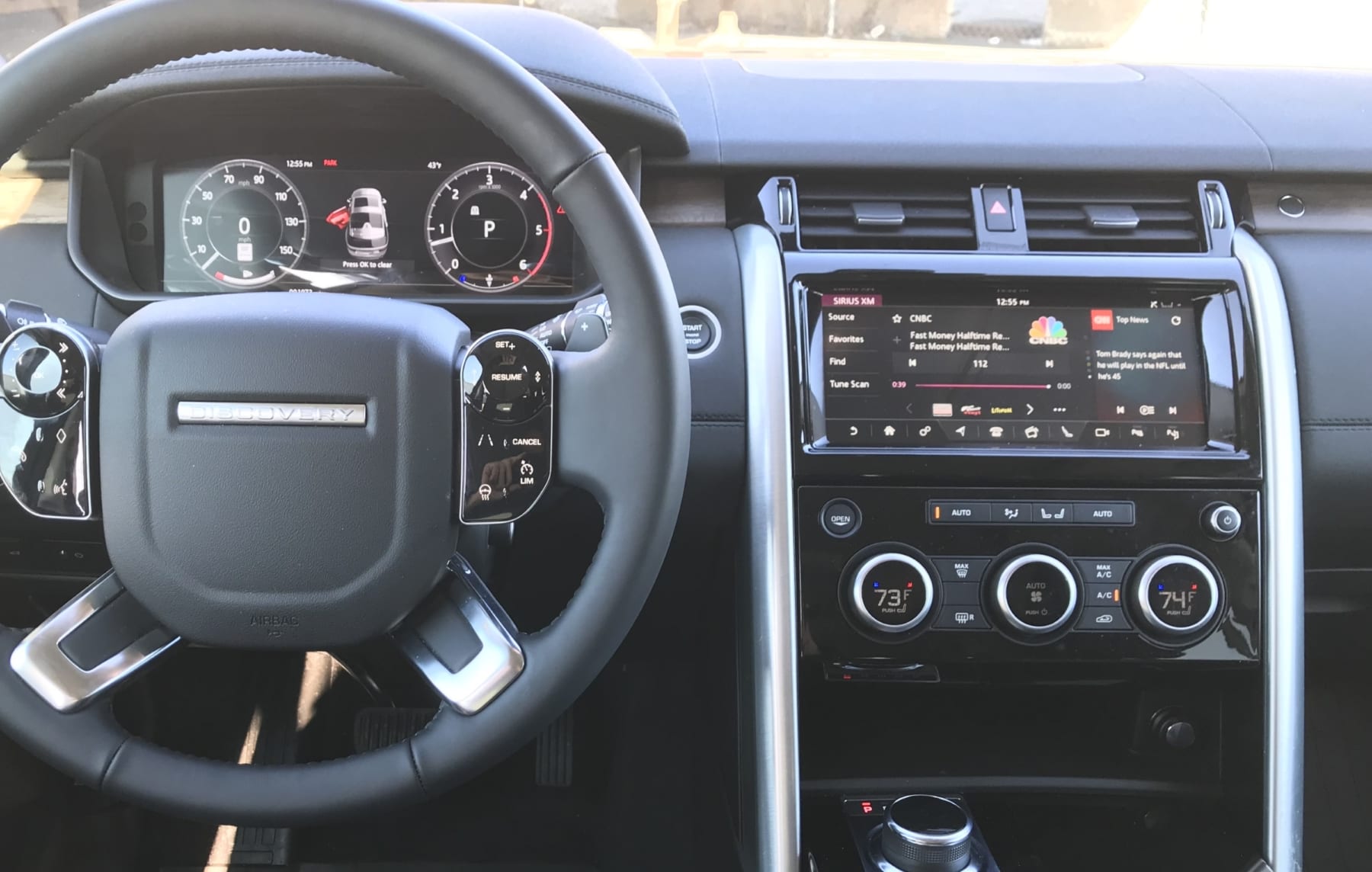 But there is a little button in the cluster of those three knobs that says “open” on it. Hmm, what could that be?

The only way to find out is to the press the button. 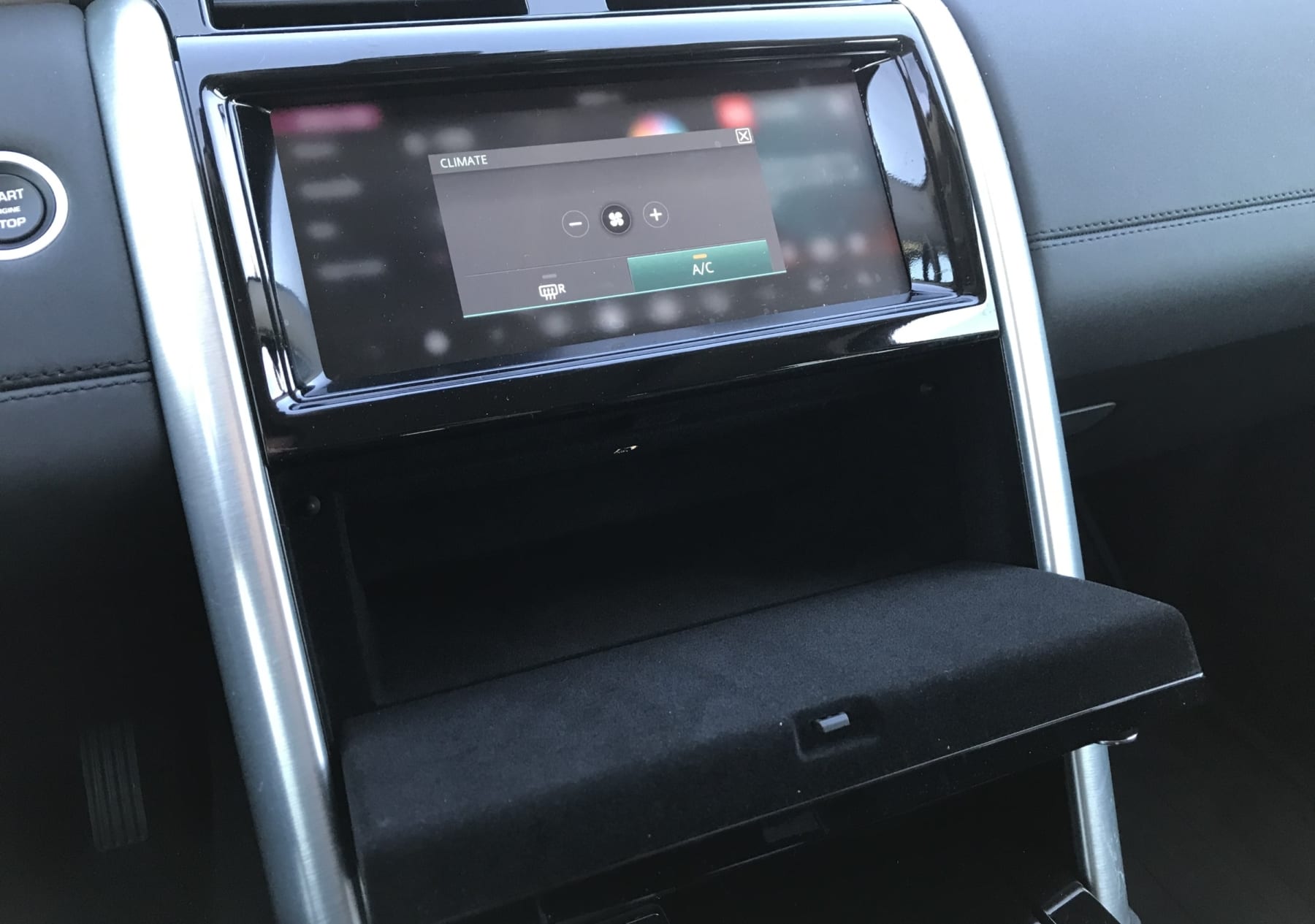 Pressing the “open” button tilts the whole knob panel forward, revealing a deep secret compartment under the touchscreen. Now that is some cool MI6 shit right there. Aftermarket outfitters could utilize this space for locations of missile, oil slick, and other such secret agent gadget buttons.

But, shockingly, those looking to secretly stash away small things have a better place for them in their Rover. 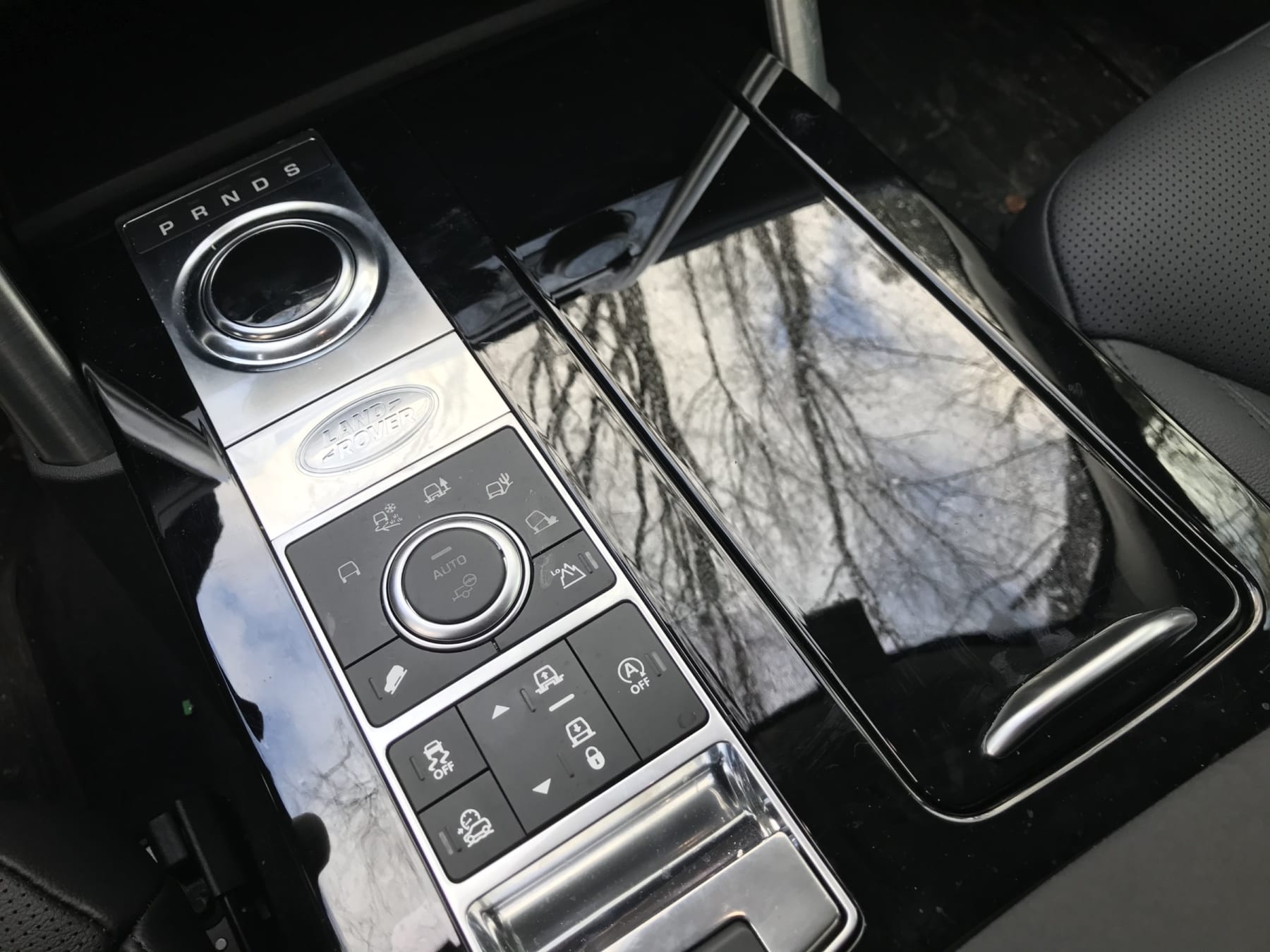 Sliding the cover next to the shifter and terrain response buttons exposes the cup-holders. In between the cup-holder are nifty cell-phone holder things. Clever, especially considering that the USB ports are located right under the center armrest. 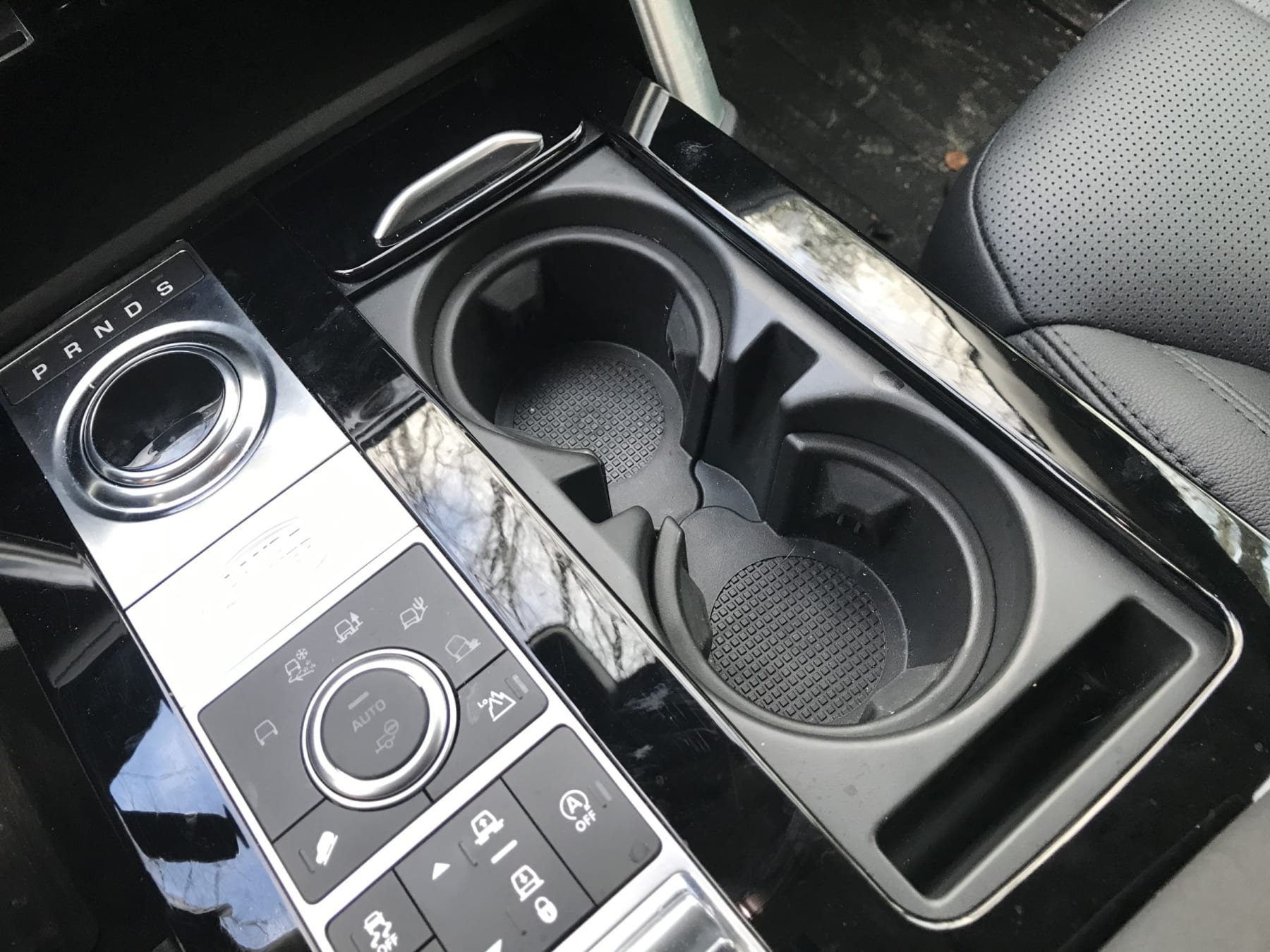 Like the man in the infomercial says, but wait there’s more!!!

Grab the cup-holder and push it toward the front of the car. It, almost surprisingly, it will slide forward to reveal… A SUPER SECRET UNLABELED COMPARTMENT! 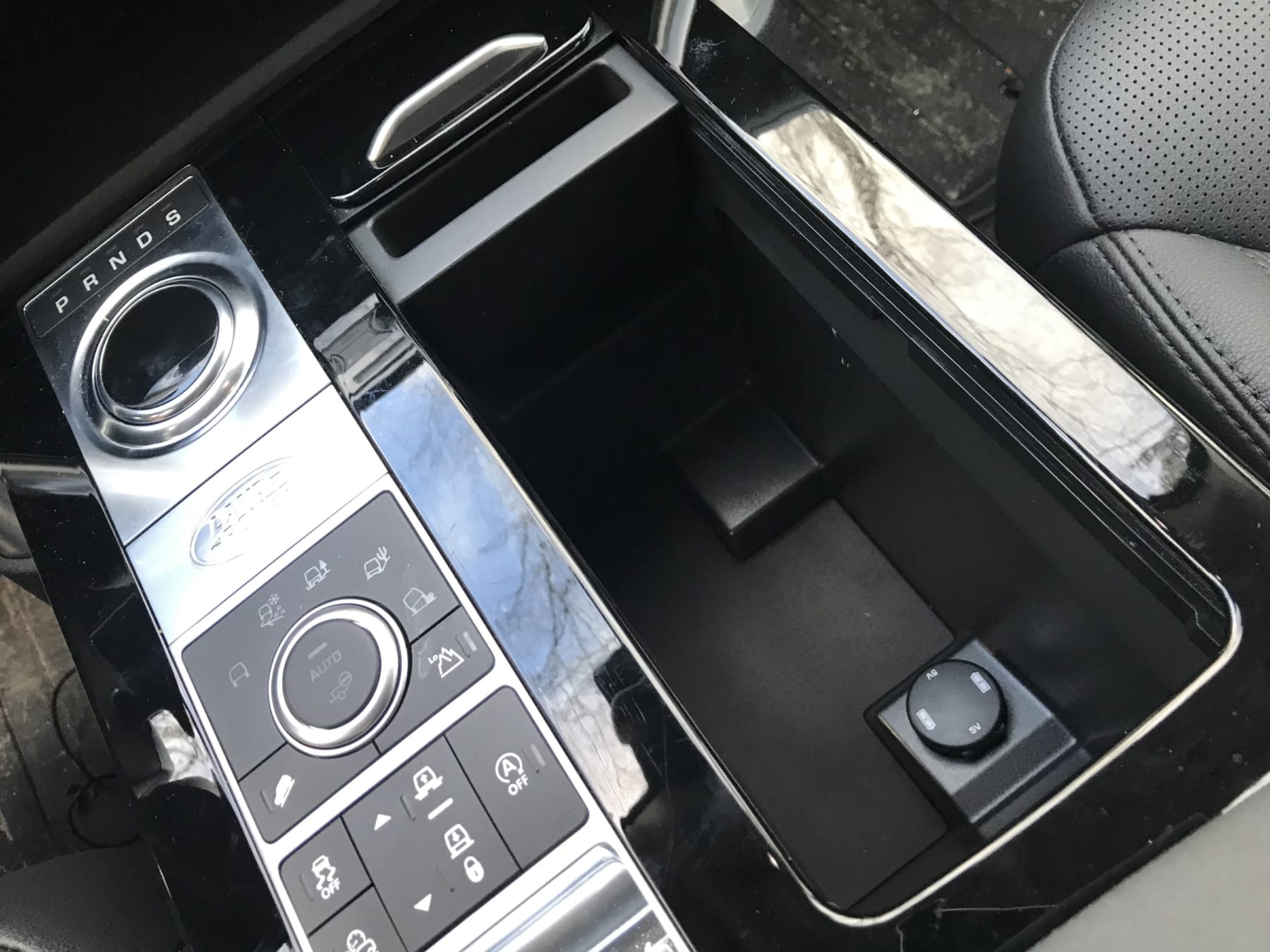 And that super secret compartment is illuminated and has a USB port in it.

The rest of the compartments in the Land Rover Discovery are not as special. In the lower portion of the rear of center console is a little flip down compartment. 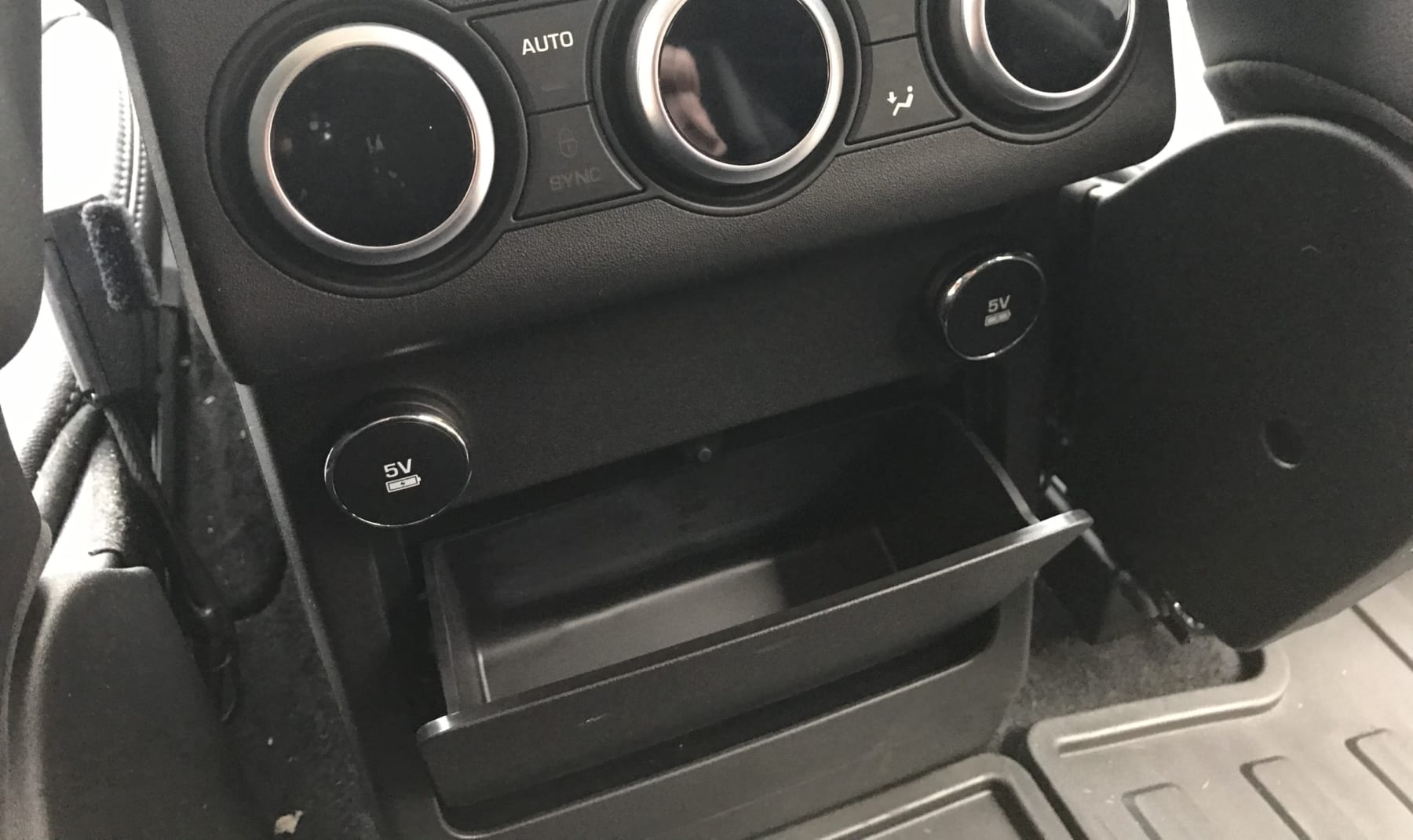 In the rear cargo area there are two compartments in the walls, under the side windows. They are reminiscent of the compartments on old Discos but are much smaller. On the positive side, they have USB ports. 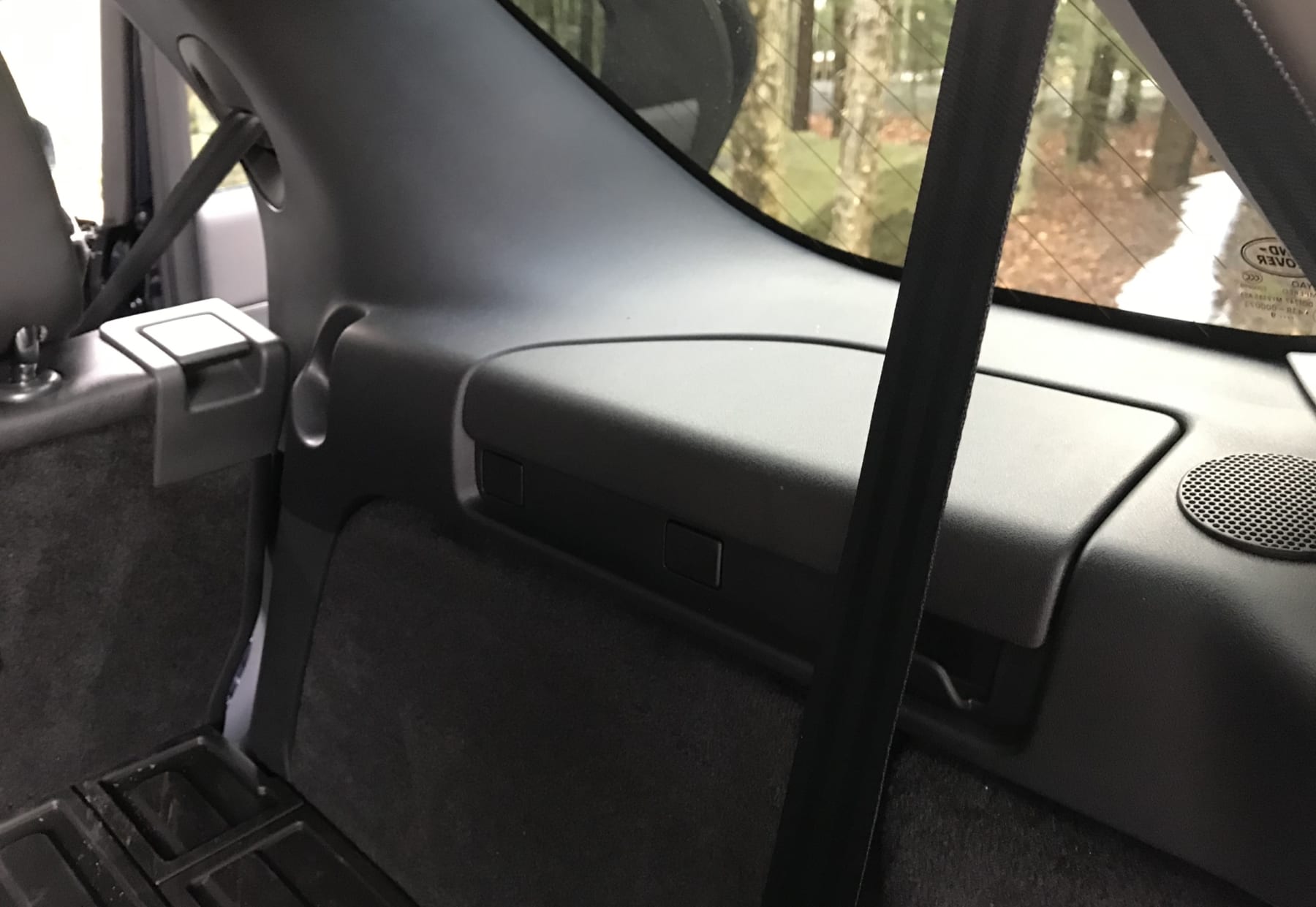 This model was equipped with third row seats that fold into the floor. Behind those seats is a handy compartment for smaller items. 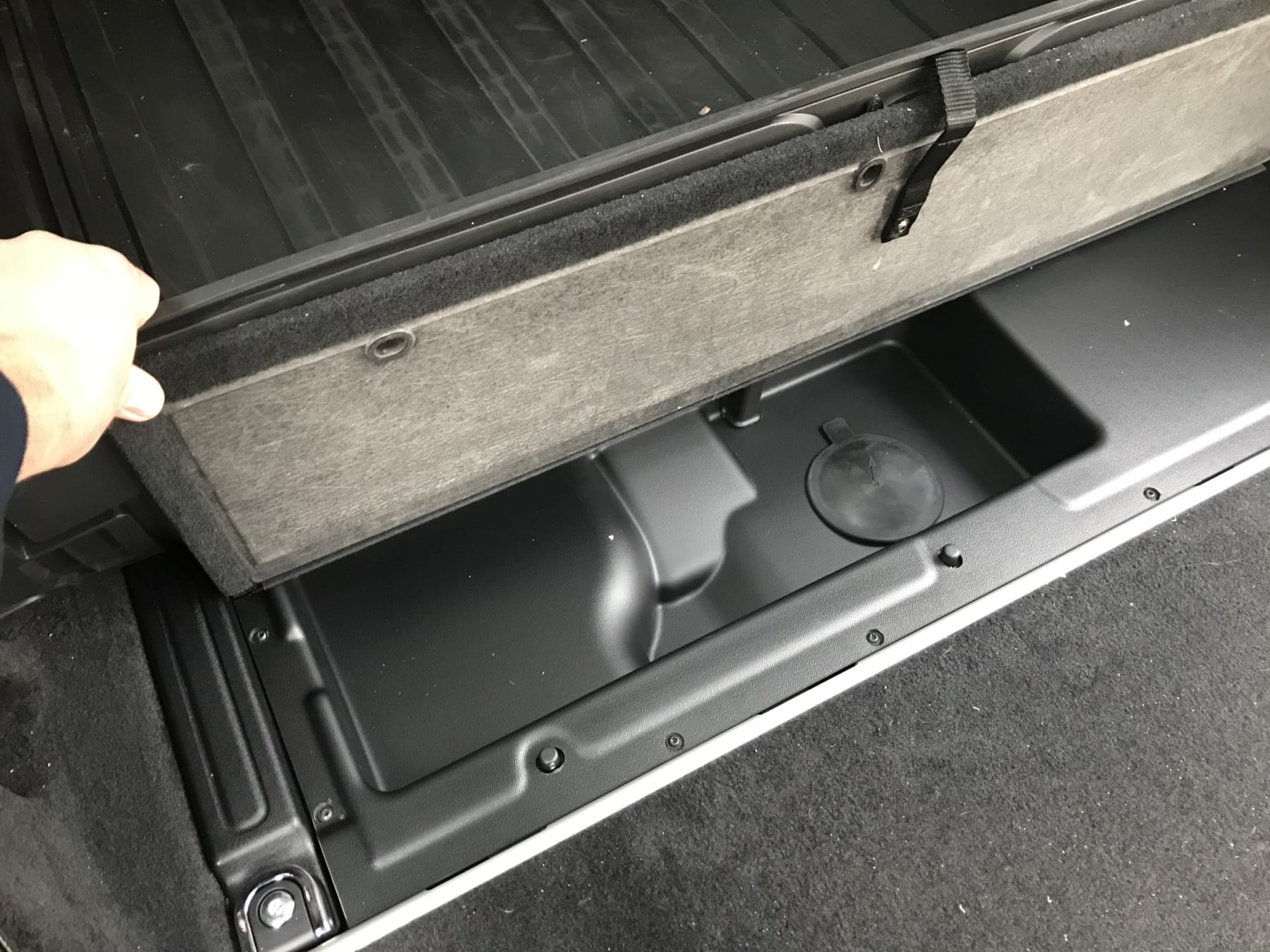 Typically, from my experience, it’s vehicles like Honda or Toyota that have various, interesting compartment but the Discovery really surprised me. You could actually hide stuff in the compartment under the cup-holders and no one would know better to even look there. The flip-down HVAC controls would be super stealth is there was no big “OPEN” button right on the lid. All of this makes me wonder if I missed some other secret compartments.