Welcome back to Lamest Classics, where we traipse through the options of not-notable vehicles that are now eligible for classic car status in most states in the U.S.

Minivans were weird in the ‘90s. I could spend most of the year covering these things alone. Toyota’s Previa was a spaceship lozenge. The new Odyssey didn’t have sliding doors, but boasted some very trick seating. GM had the Dustbuster van siblings. The Aerostar even faced internal competition from the new-for-’95 Ford Windstar.

But the Aerostar. The Aerostar had a monster truck. 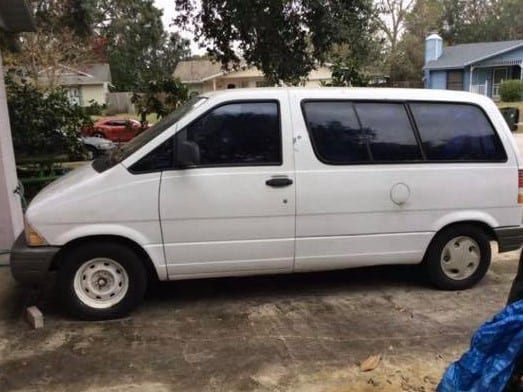 We’ll get to the monster truck in a minute.

Introduced in 1986, this partially-flattened-cardboard-box of a vehicle was still largely unchanged by ’95. It drove like a truck. It rode like a truck. Its car-based competition was clearly superior in those departments, unless you’re the kind of person who prefers trucks — in which case, your choices were this, the Chevy Astro, or a conversion van. Or, you know, an Explorer or something, I guess.

The Aerostar’s high-schooler-with-a-drafting-table shape somehow still gave the thing a drag coefficient of 0.37, which is the same as the Mustang Cobra at the time. I’m not sure which if that’s a compliment for the pony car or the van.

Still, it enjoyed strong sales somehow. Ford kept churning these out alongside the Windstar until 1997, including in high-spec Eddie Bauer editions, with available leather seats, all-wheel drive, and a 4-liter V6. You could even get a manual transmission with the big V6, though not with AWD. I saw a cargo version for sale in that combo, and it took all my energy to not go turn it into a Lemons race car. 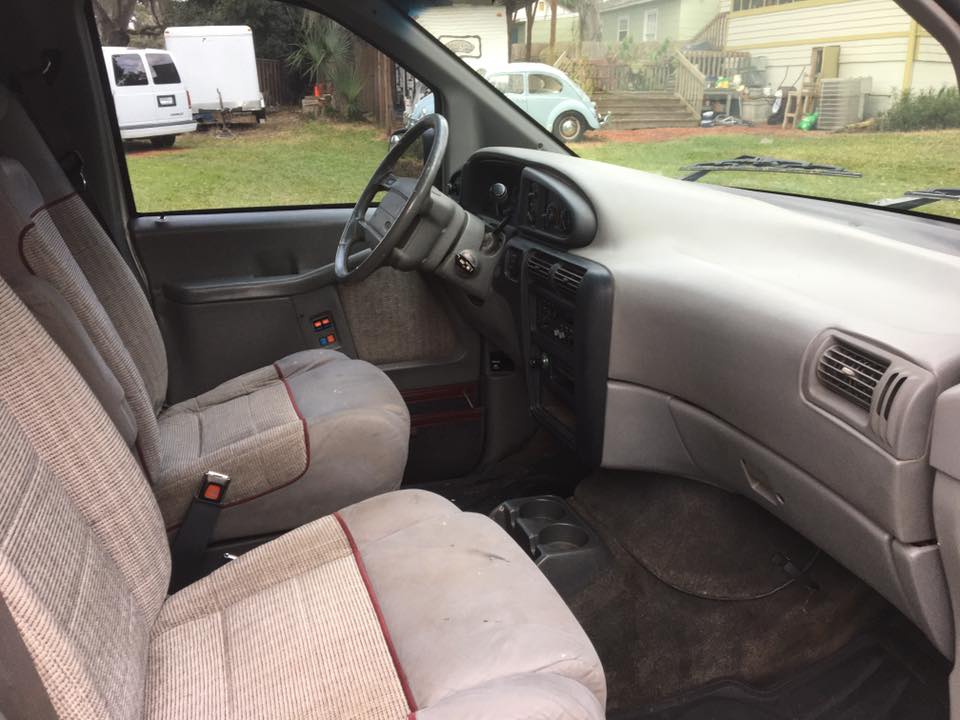 Don’t pretend it’s got a Cossie.

The base engine was Ford’s all-iron, 3-liter Vulcan V6, shared with the Taurus, Ranger and Tempo. As far as engines go, the already-outdated-when-designed-in-the-’80s Vulcan was relatively short-lived.

The 4-liter, though, was a version of Ford’s Cologne family of V6s, which date all the way back to the 1960s. They get their name from the city in Germany where they were manufactured. (The city is called Köln in the original Deutsch — thank you, high school German class. I found a use for you after all.) 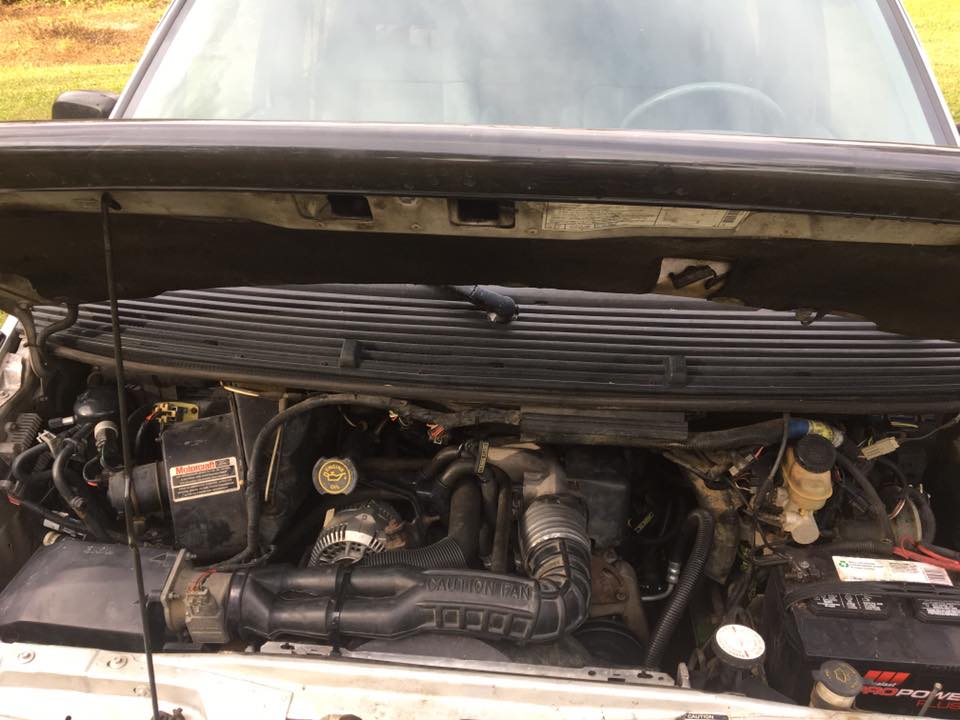 There was even a hot version of that engine, made by Cosworth, with four cams and 24 valves, making nearly 200 horsepower. But, of course, that wasn’t available in the Aerostar. The pushrod boat anchor stuffed under that tiny, slanted hood made a paltry 160 horsepower. Not exactly a big step up from the Vulcan’s 140 ponies.

Vehicles like the Aerostar gave minivans a reputation for being impossible to work on. My dad sold our family’s Aerostar with more than 100,000 miles on it, and the thing still had the original spark plugs on the two rearmost cylinders because they’re literally impossible to change.

But. It had a goddamn monster truck. 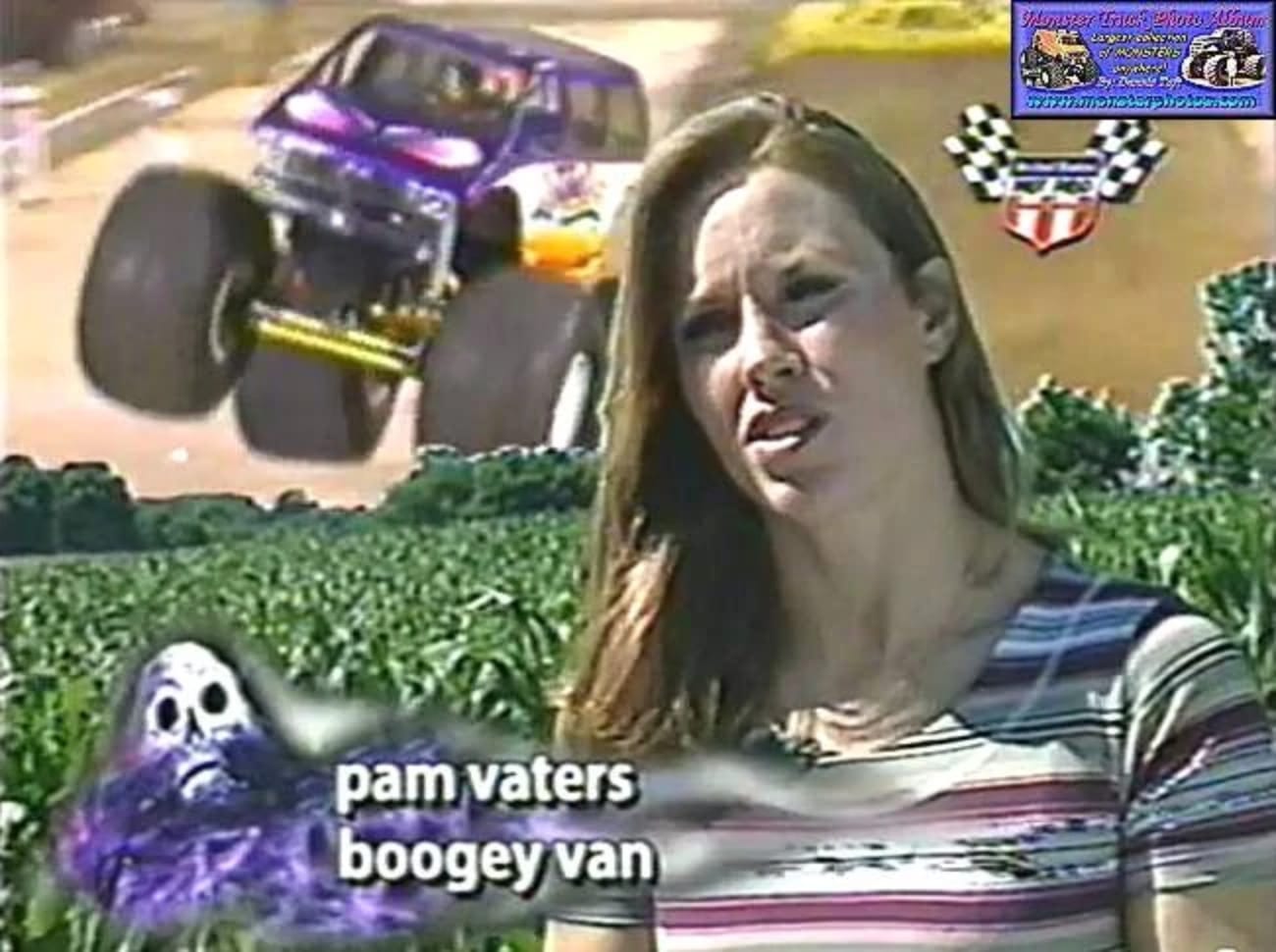 The Boogey Van debuted in 1993, and was piloted by one of the few women in the sport, Pam Vahle (then Pam Vaters), until 2001. I don’t know if it actually helped sales, but it’s at least a little weird to me that the monster truck kept the minivan look a full four years after the van ceased production. 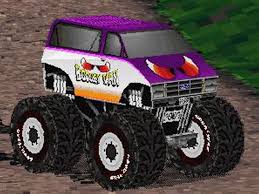 It also appeared in Microsoft’s Monster Truck Madness computer games, which was probably just one of the ways Microsoft was trying to show off its Direct3D graphics API and bill Windows 95 as a great operating system for gaming. I spent a lot of time ripping up the tracks in that game on what was probably the first computer I built myself. 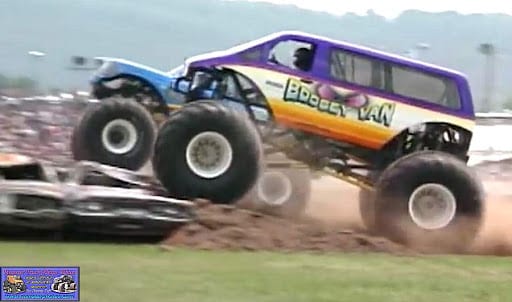 The weirdest thing I learned among all this (in addition to the fact that there’s a wiki on monster trucks) is that, like the Aerostar as a platform, a monster truck chassis has a surprisingly long life. The Boogey Van was reskinned into the Captain USA-themed Chevy Silverado in 2005, and is still running today as the Monster Patrol Chevy Silverado.

Well, that’s what the Monster Trucks wiki says, but that’s clearly incomplete. There are videos of the Boogey Van as recently as 2015. It has updated livery and is without the Ford grille, but it’s clearly still an Aerostar. 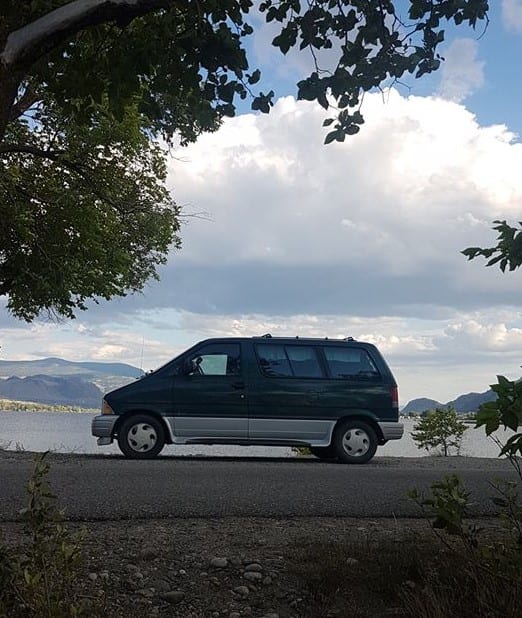 It’s worth noting that Ford (and Chevy) stopped selling minivans in the U.S. for a long time. Their current entrant is the hardly-marketed-at-all Transit Connect.

I really don’t think many of these non-monster Aerostars survived in colder states. My dad’s van was starting to lose its rocker panels to rust before it was 10 years old, and though the DJ he sold it to said it still ran great many years later, it had rust holes you could fit appendages into. No word on whether the holes helped with spark plug access. 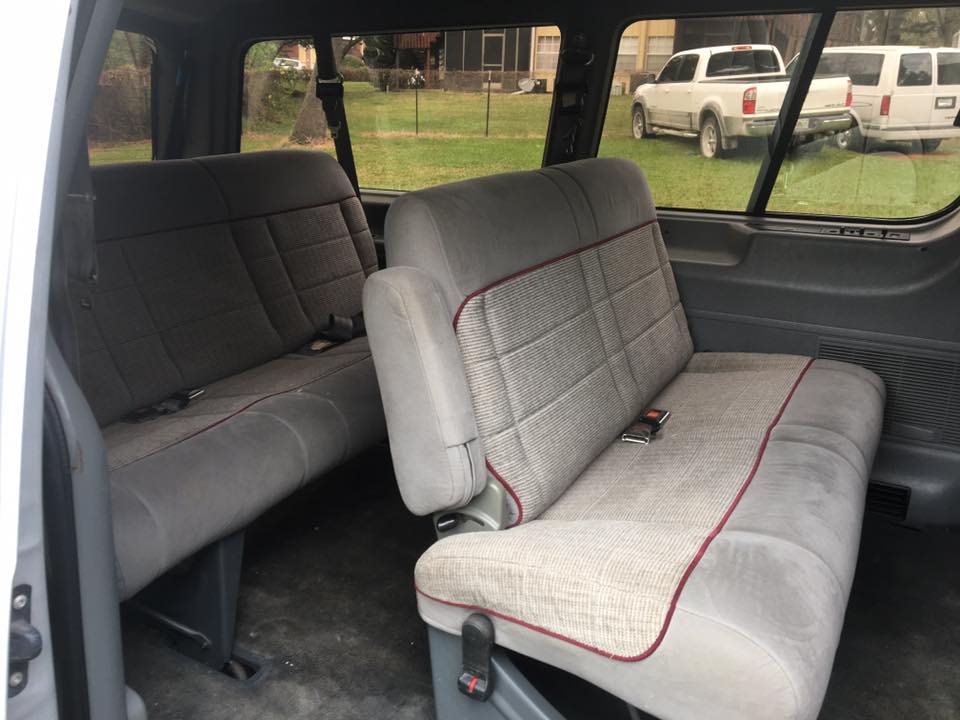 That means if you really want to show off a doorstop-with-wheels at next month’s Cars and Coffee, you’ll have to venture south. There are plenty of examples still for sale, either running or ran-when-parked, for anywhere between $600 and $1,600. You can take your pick of extended or regular, 2WD or 4WD, passenger or cargo. If you’re lucky, you’ll find one that still has the Ford headphones that go with the back-seat headphone jacks. Those have their own volume control, but you had to listen to whatever was on the actual stereo mounted in the dash. 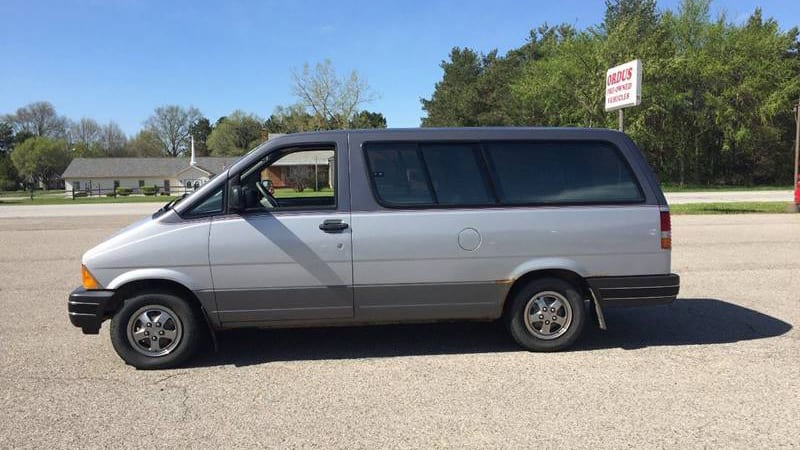 So polish that turd up and don’t forget your vintage plates. If you find yourself an Eddie Bauer edition with E-4WD, slap the biggest knobbies you can fit on there and spin those tires through a muddy field. Or get the Sportvan model with the front air dam and the running boards. 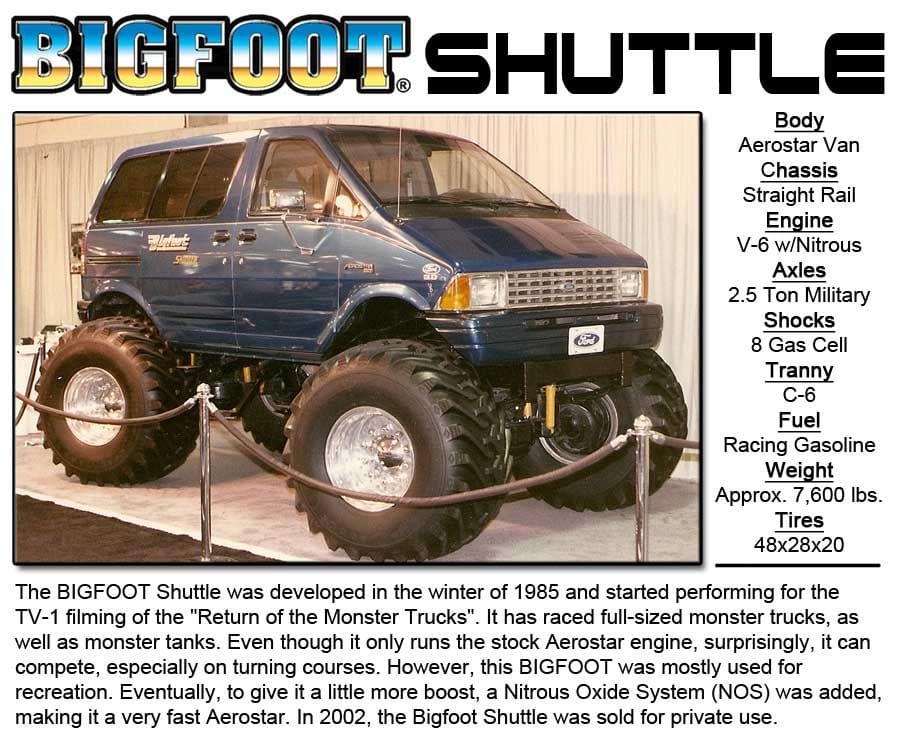 Regardless, people are guaranteed to be impressed, surprised, or confused. If you’re lucky, maybe all three at once. If you’re gonna be weird, you might as well go all out.