When Jeep launched its Rubicon trim level on the Wrangler for the 2003 model year, Rubicon wasn’t exactly a household name. It meant little to those unfamiliar with off-roading and, even to some, it didn’t carry weight. When it dropped, the Rubicon trim was a game-changer. It was the first time a true hard-core off-road model was available to the buying public. Jeep delivered with equipment that made it as capable as a Wrangler could be within the manufacturing, buying, and sales confines that existed back then. It was the ultimate version of Jeep’s ultimate off-roader, built to tackle the ultimate off-road trail.

Today the Rubicon is more of the same, boasting many of the same features that the original Rubi once did– locking differentials, electronically disconnect-able sway bars– but with a wide swath of modern tech. Trick traction control allows for maximizing forward progress; a built-in camera shows the terrain ahead of the grille; modern suspension, tires, and transmission tuning allows for the most capability possible. Like its predecessors, the JL Rubicon is a true, serious trail machine. It has massive articulation and trail capability. It handles the Rubicon Trail, that after which it’s named, with ease.

But the Rubicon Trail is all about slow-going, about maneuvering through rocks, about making it up and over and down and across obstacles that enthusiasts make a point of trying to cross without getting stuck. It is four-by-four wheeling, defined.

Ditch the trail for the desert!

What if that’s not your thing? What if you hate going slow and prefer high-speed desert running? Is “Trail Rated” not doing it for you? Do you want your four-by-four to be “Desert Rated” instead? 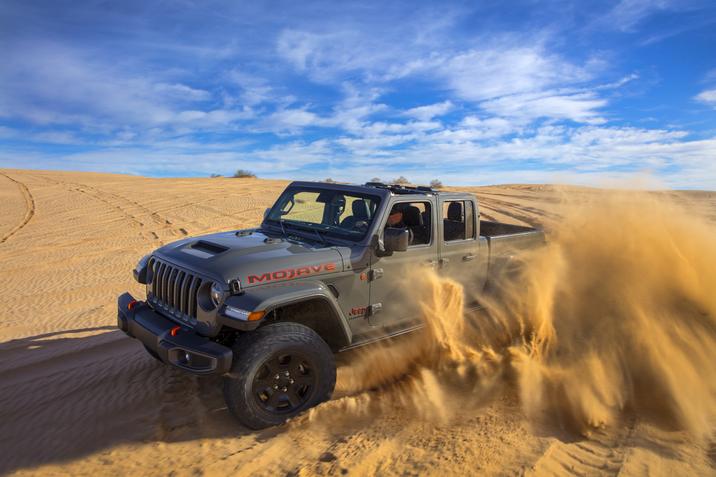 To fill that void, Jeep has debuted the Mojave version of its Gladiator. Mojave reflects the name of the southwestern U.S.’ massive desert. It’s a piece of land that covers nearly 48,000 square miles and touches four states in the process. Obviously, Jeep wanted buyers to associate flying through the barren landscape at high speed in its new pickup with this area, and thus it received its name.

Unlike many other location-based Wrangler names, Mojave here reflects more than just a decal package. Most immediately noticeable is the raised, scooped hood. The suspension is by FOX, making use of 2.5” internal bypass shocks with external reservoirs and “hydraulic jounce bumpers,” aka bump stops. To improve stability, Jeep widened the track by half an inch. The front suspension also receives an additional inch of lift. But Jeep even went even further: the Mojave has an additional skid plate, a reinforced frame, beefed up axles and steering knuckles, better-bolstered front seats, more flexibility in 4WD LO, and the ability to run the rear differential fully locked while in 4HI. The package includes decals as well, but with this hardware, it seems well-deserved.

Jeep introduced the slogan “Trail Rated” which has now become synonymous with the brand’s four-wheel-drive capabilities. The introduction of “Desert Rated” now opens the door for another sub-line of off-road products meant for a similar, but entirely different buyer. Or, as is also likely, the onslaught of buyers who simply want the newest, best Gladiator of off-road pickup available. Either way, this is some serious hardware that should translate to substantial results. 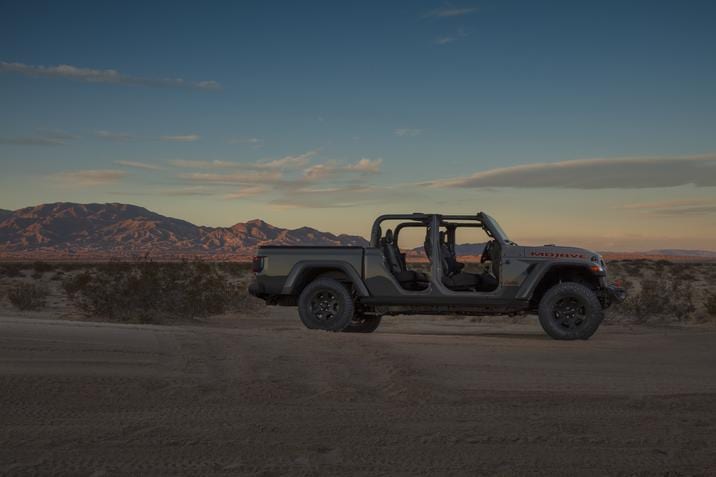 Off-road, high-speed runs will most display the changes. The additional inch of front end raise will help prevent it from washing or bottoming out. The FOX suspension will allow for long durations of fast travel over whoops, dunes, or bumps. The ability to lock the rear end even at speed will keep the truck stable. It may even allow it to slide a bit more than it otherwise would. All-in-all, it has the makings for a really well-equipped, truly competent out-of-the-box desert monster. It should outdo the Chevy Colorado ZR2 and challenge Ford’s Raptor directly.

In the real world, the changes will also translate to a better Gladiator, too. Lengthening the Wrangler’s wheelbase made the JT (Gladiator) the best-riding Wrangler yet. Thus, “stretching” it even further will only help its case. The transition to JT also translated to better high-speed stability, which isn’t a bad thing for the relatively narrow truck. It’s also of note that generally, suspension designed to work at traversing rough terrain at high speeds does bode well for the vehicle’s on-road, on-highway compliance. It may come at the slight expense of either body roll or floatiness. But it’ll be smoother and more comfortable thanks to the travel and suspension’s ability to absorb imperfections. 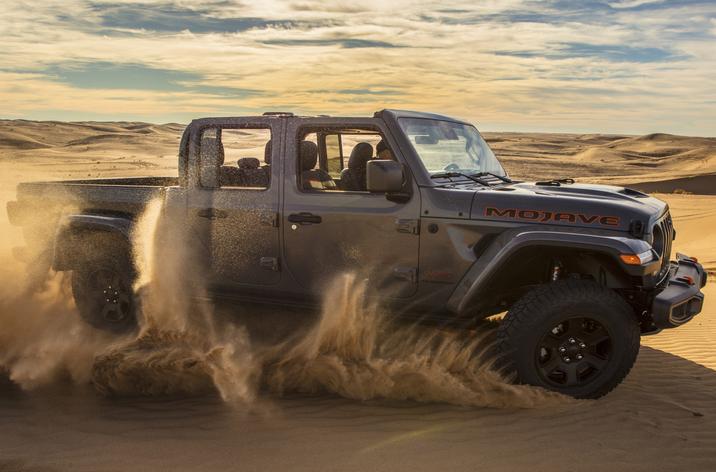 All in all, the Jeep Gladiator Mojave should be a genuinely great off-roader. It should be a very solid daily driver as well. After all, the formula worked for the Ford Raptor. And with Jeep’s available technology, what was likely a relatively low development cost, and the wide expanse of loyal Jeep buyers, the Gladiator Mojave very damn well might be a huge hit for Jeep. Another one, let’s call it since the Rubicon is still out there kicking ass, both on the trail and when it comes to sales.

A quick aside: Is the Gladiator Mojave a precursor to the Ram TRX? Does its suspension foreshadow what the Ram will have? Is it a test-bed prior to the Hellcat-powered Ram hitting production? I’m wondering it there’s some kind of cross-over between the two. Perhaps elements of building the Mojave will serve as extended testing prior to the TRX’s big reveal.

The debut of the Gladiator Mojave took me by surprise. Even after seventeen years of the Rubicon, the Mojave struck me by surprise. It never even occurred to me that Jeep would branch out and build something for fast off-roading. Mind finally wrapped around it, I’m expecting a Wrangler Mojave, too. Because if there’s one thing that FCA does well, it’s sharing parts and features across models. Now, about that Hellcat-powered Gladiator Mojave… 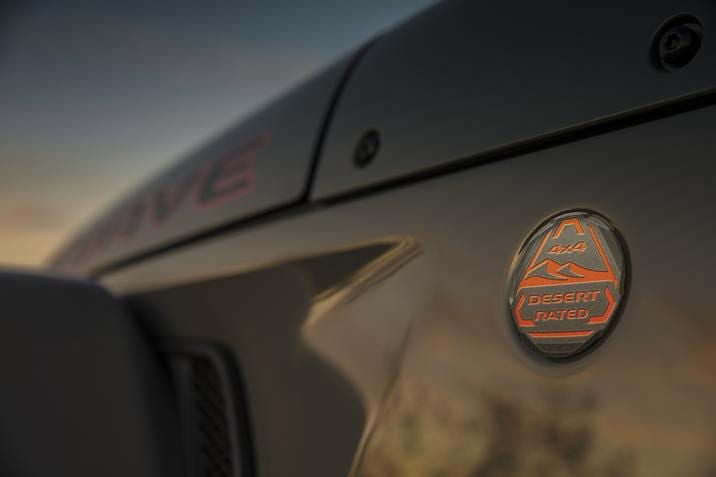