iRacing 12 Hours of Sebring Race Report: Our Best Race Yet

The iRacing 12 Hours of Sebring is a special one for our team. Last year’s event was the first iRacing enduro that we ran together with the original crew, so this year’s race was sort of an anniversary for us. But whereas last year we were riddled with issues that impacted our finishing order, this year’s race was probably the best one we’ve had yet. 6 TURN Racing Sim Tools teams took to the grid last weekend and all but one finished. And of those finishing teams, all but one was on the podium.

This was far from our easiest race though due to the curve ball iRacing threw at us. Two weeks prior to the race, they released a brand new tire model for all the cars we’d be racing. This meant that the grip would rise and fall at different times, they would wear differently, and all of our old setups and driving habits would need to be tossed out the window. It was a big change for the service that threw a lot of teams off. For all intents and purposes, we basically had to learn how to drive completely different cars. But we did it and the work we put into our race weekend paid off handsomely. Here’s how we did: 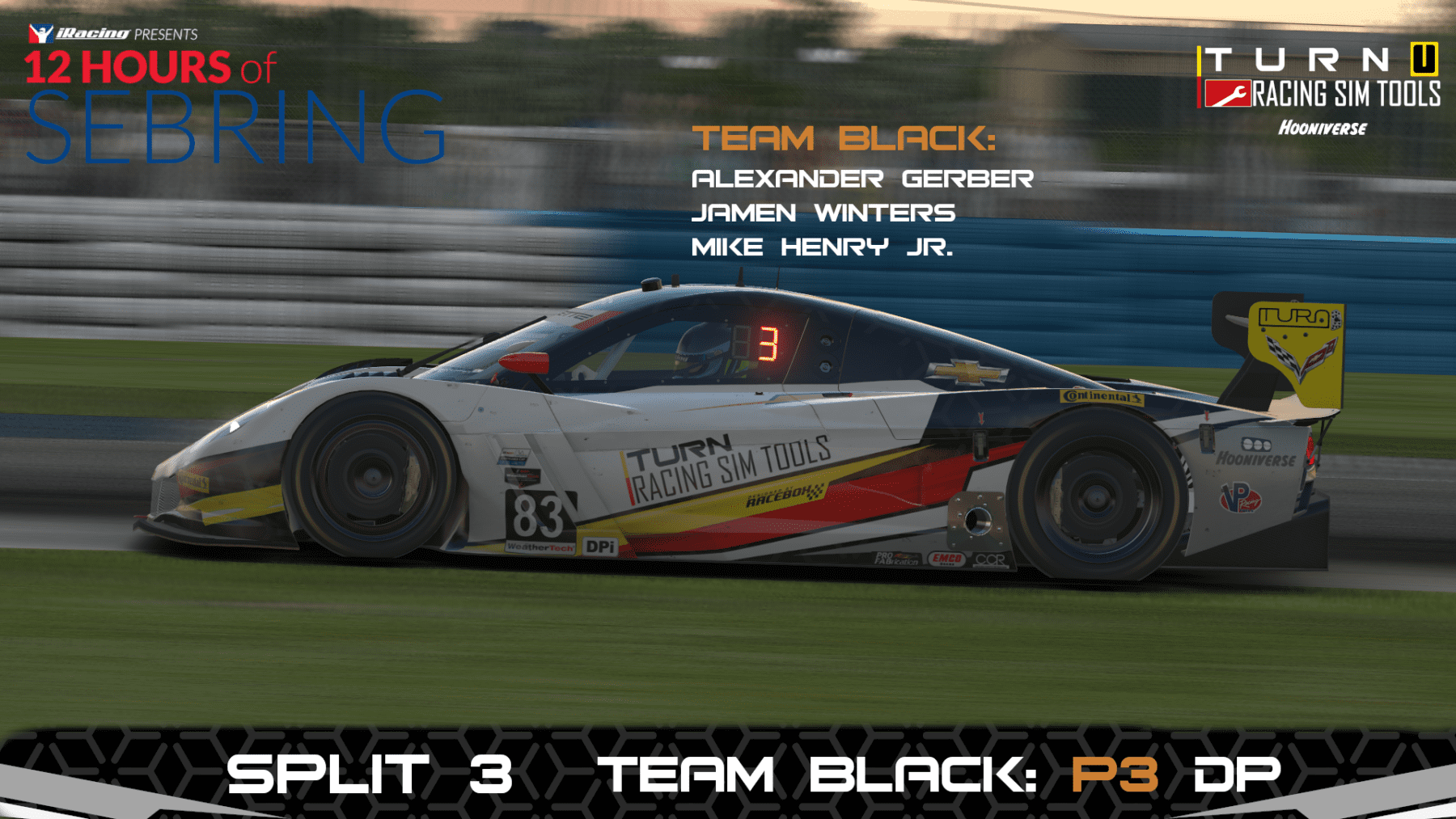 These guys are being mentioned first because they had an incredible weekend. Not only did they finish third in the DP class in the main race, they also won the race the night before in the Aussie split, which is a session iRacing hosts the night before the “main” session for all the people who refuse to live in a normal time zone. So at around 9 PM on Friday, Jamen, Geoff, and Alexander began running the first of their Sebring 12 Hours. They raced overnight and finished first in the top split. Then the following morning they registered again for the main session with Jamen, Mike, and Alexander and continued racing throughout the day, finishing third. We love all of our teams equally but we’re secretly proud of Team Black the most. 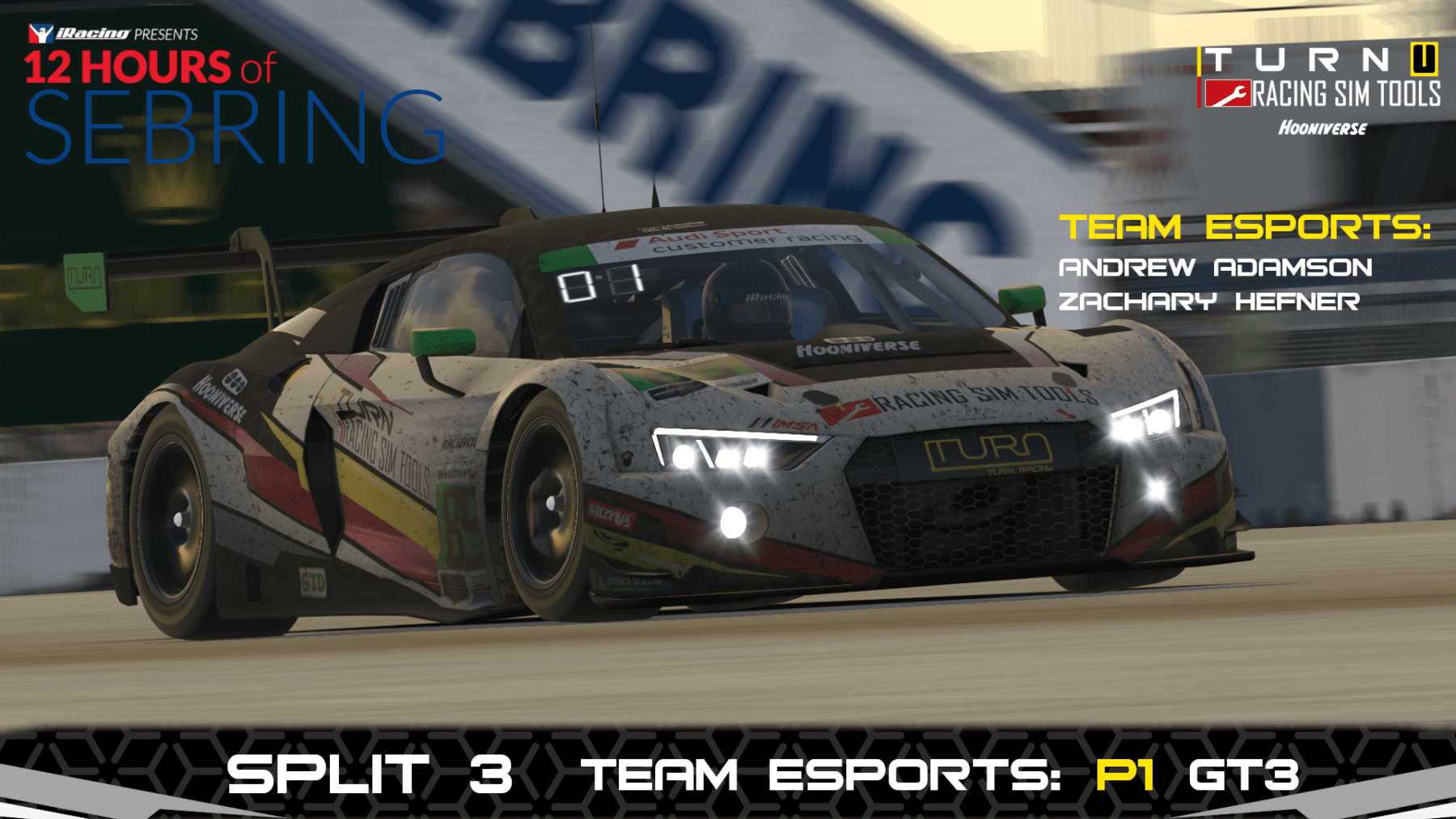 The eSports team saw our two fastest drivers share an Audi R8 GT3. This duo was leading Sebring last year when disaster took them out of the race in the closing minutes, so they came into the weekend with unfinished business. Ultimately they took the win in their class but not after their fair share of heartbreak. They had some incidents on track with other cars that damaged their car and set them back a few times, but the biggest heartbreak was off the track. Zachary’s cat, Ollie, had been at the vet since a day or two prior dealing with some complications. Then a few hours before the race was supposed to start, they were called in to come see Ollie just in case. They thought Ollie would pull through, but sadly, 4 hours into the race, they got another call. Ollie passed away while Zachary was in the car. Andrew stepped up by increasing his driving duties, but Zachary came back and finished the race in first place. So not only did they win a very difficult race in a competitive split, they did so while dealing with a tragedy. This is why these two drivers continue to be the ones the rest of us look up to. 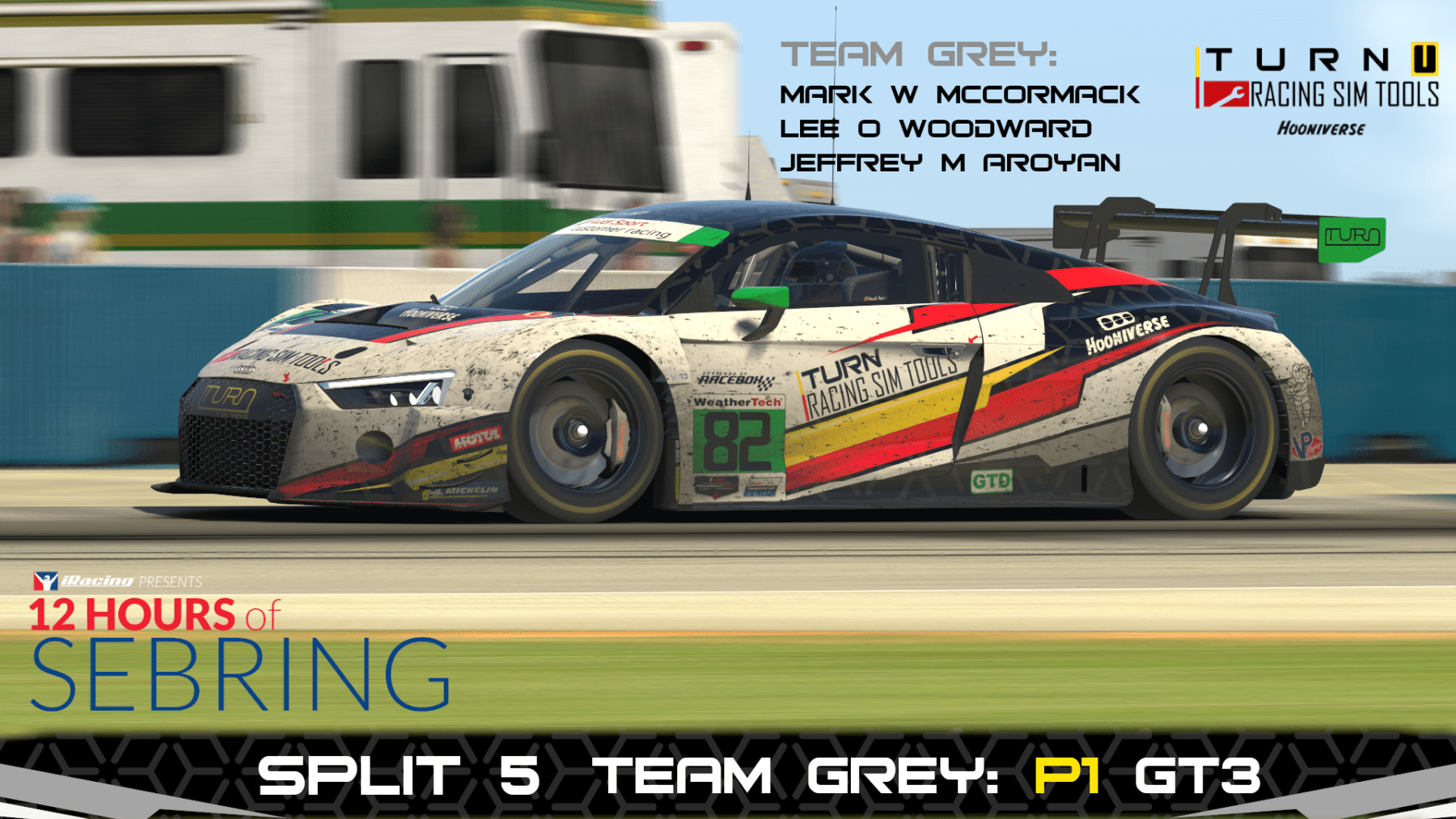 Bringing home another impressive win was Team Grey with Jeffrey, Lee, and Mark in the Audi R8 GT3. They dealt with many of the same on track issues as the eSports team ran into while being the slower class. Some over aggressive passes from faster classes and a DP that target fixated into their bum at Sunset set them back a little. But they led a good portion of their race and won with a lap over the next car. They went with the same strategy that all of us went with, which was to have a clean race and put fast laps in, but they just did that a little better than the rest of us. 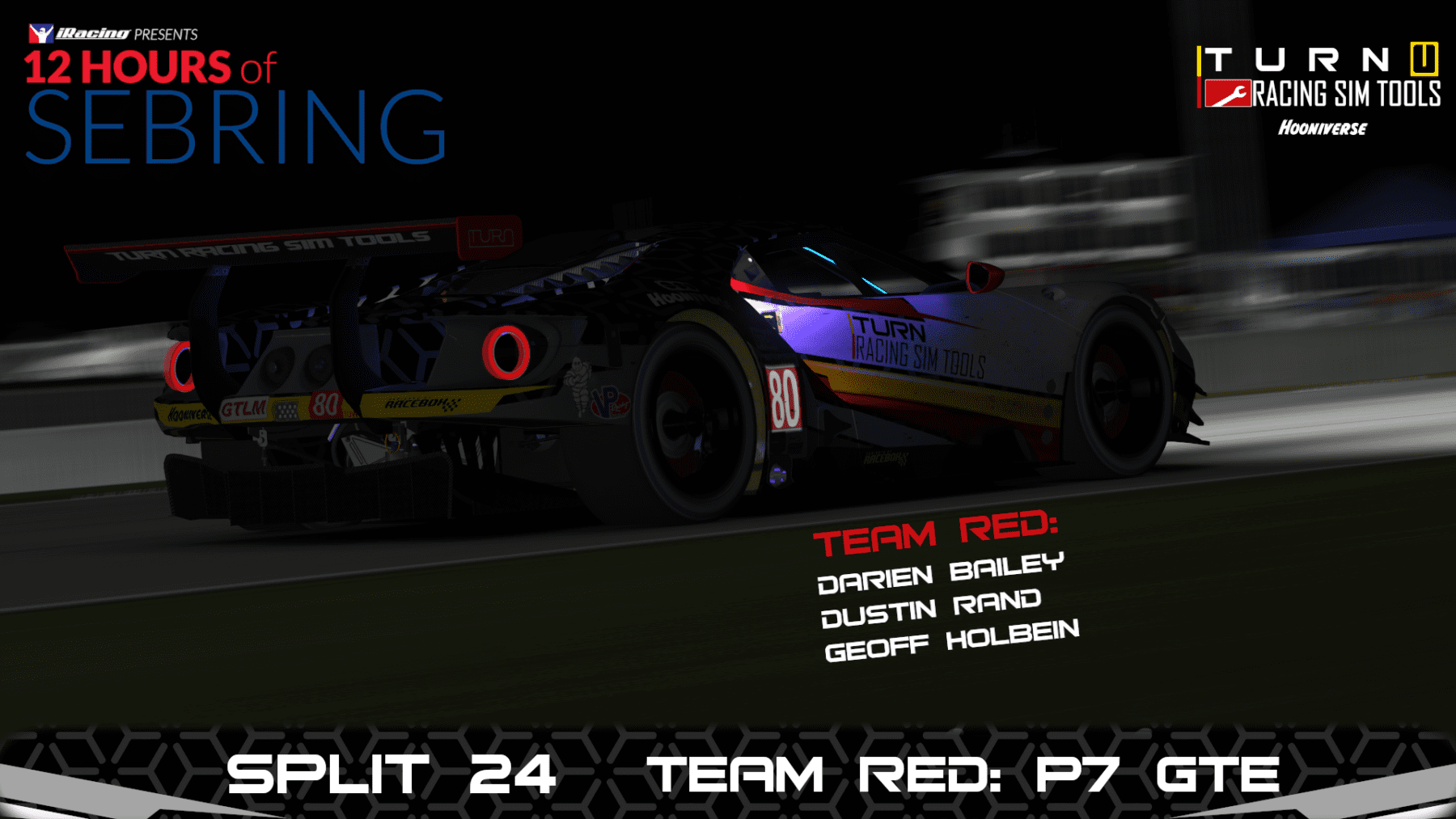 The Team Red crew brought an old friend back from hibernation to help with driving duties. Darien Bailey raced with us at Sebring last year but then got forward deployed to Japan to go live in the future. He started the race for the team and steered clear of trouble for his stints. With a great start to help build momentum from, Dustin and Geoff took over for the next several hours and kept the car as clean as is possible in a session with 50 other GTE cars. Bailey was back in the car for the final hours and secured a strong P7 finish. 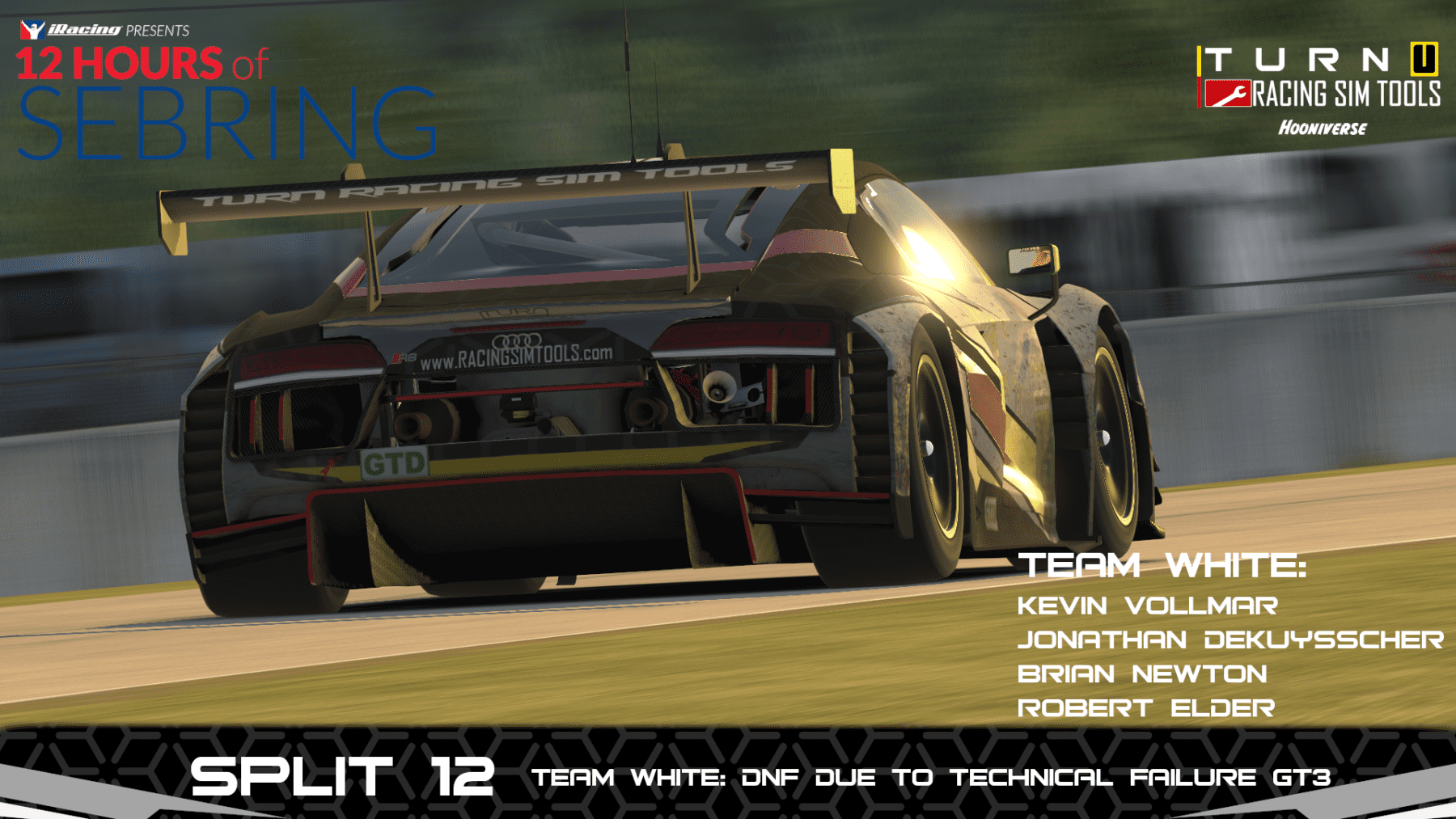 So when I said all but one team finished…. yeah. Team White was running the Audi R8 GT3 in their split when disaster struck very early on. They were caught up in a cluster fuck in the opening laps through no fault of their own. Then after the repairs were made, the driver at the time had a network issue which sent the car into the wall again. They pulled the plug after that and are regrouping for the next race. 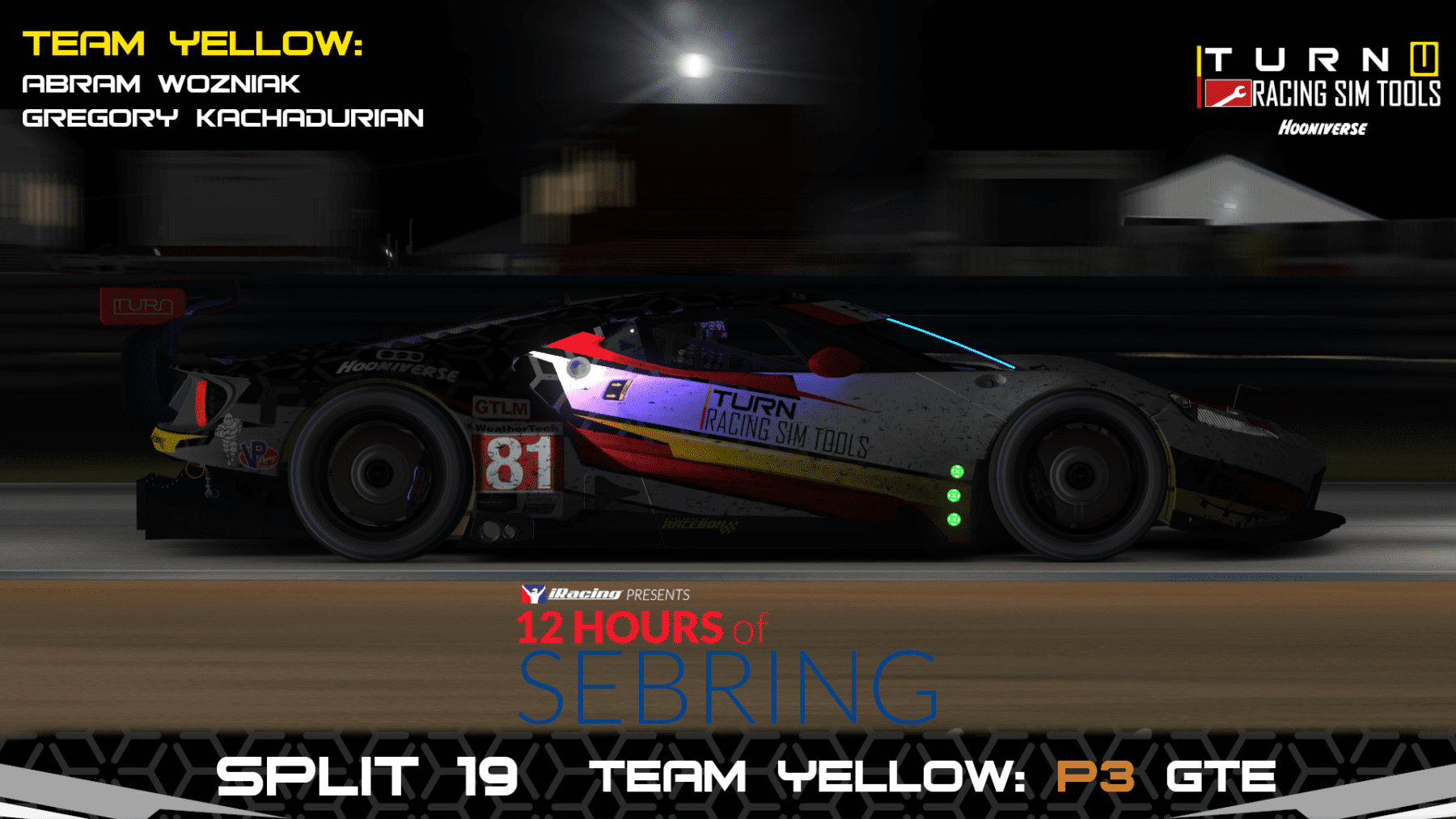 I can talk more about this team’s race because I drove it. I partnered with my 5th or 6th best friend Abram (for the first time since Sebring last year actually) in the Ford GT to duo the 12 Hours. Our race prep began two weeks prior to the race when iRacing released a dramatically different tire model for the GT cars, which meant we had to redo our setups from scratch and learn to drive what was basically a new car. Fortunately, the Ford GT became an absolute joy to drive with the new tires and I had somehow convinced Abe to drive it with me. With some setup input from our partners at Racing Sim Tools, we got this thing on rails. Abram used that to his advantage to drive through a metric shit load of carnage on the first  turn. Seriously, he rounded turn 1 on lap 1 and several cars were in the dirt already, one of which was flipping. But he kept his cool (which is exactly why I wanted him to start for us) and jumped ten spots on lap 1. By the 2nd or 3rd lap, we were up another 6 spots.

Sadly his momentum was halted with a spin at the hairpin, which would have been harmless had another car not run wide and give us a little nose job. The car was still drivable though so he continued his first two stints and slowly ran through the repairs during pit stops. By the time I got the car we were in the teens and climbing. My lap times were good but we weren’t gaining as much ground as we needed to. So we took a risk and started double stinting tires after my first stop. We weren’t sure how the tires would wear when the track was at its hottest during the day and I had no idea how the car would drive, but that allowed us to jump close to 30 seconds immediately. I then started fuel saving to stretch out our stints as much as possible. We had cracked the top 10 by the end of my first two stints. Abram got back in for the next two hours and continued to gain spots through attrition. He had gotten us in contention for a top 5 by continuing to just put in good clean laps.

My next two stints were fairly uneventful. I continued to fuel save and double stint tires to gain track position, but by then I had to start defending my position a little. A fast team had gotten by me early on, so I just focused on keeping them in my sights while ensuring the gap behind me increased. A bit later on, the team ahead of me had a disconnect which teleported them back to the pits. That allowed me to inherit P5 and keep it. P1 had checked out already but we were on the same lap as everyone up to P2. I continued to put in consistently fast laps while fuel saving and double stinting and gave Abe the car one last time with really good track position. He kept it out of the wall and off the grass this time. He was able to jump another spot during his pit stop by forgoing a tire change and held it off with more clean laps.

I then jumped in the car for my final two stints. By now the track was dark and cool – the fastest it was going to be. When I came out of the pits, I was in P3 with P4 just behind me. My relative display said I was about 2 seconds. They pit four laps ahead of us and so they’d need to take more fuel on their last splash and go during the closing laps, so all I had to do was stay close if he got by me. He didn’t get by me. It took me about a lap to get acclimated with all the extra grip from the Ford, but I got right to work. I needed a perfect stint to hold this guy back, and in my humble unbiased opinion, that was as close to perfection as I’ve ever had. No missed apexes, no wheels in the dirt, no missed locked brakes. The gap between me and P4 would fluctuate by maybe a few tenths but we were running near identical times. He then started utilizing the old “flash my lights at the guy ahead of me a lot so he crashes” tactic. I was able to tune him out and keep driving my race, but it was getting pretty annoying. This battle had gone on for most of my stint by the time I was about to tell Abe to send a stern message to their team. But he didn’t need to. He disappeared off my relative, so I thought he had hit the pits early. He lost it and hit the wall. I don’t wish for things like that on any competitor, but that one did put a smile on my face. What made it even sweeter is that I was able to hold him off while fuel saving. Eat it, scrub.

For my final stint we realized there was a shot at P2 if I could save a gargantuan amount of fuel. The car we had jumped for that spot was 20 seconds behind us running really slow times to maximize their fuel, so we did too. Then they started running normal laps again, which told us they had enough for the end. We were going to be around 3 laps short despite my efforts, so I went back to a normal pace and elected to come in for a splash of fuel with about 5 laps to go. I came back out in P3 with P2 just 7 seconds ahead. After a lap or two of pushing and realizing our times were identical, I backed off and cruised home to a P3.

For all the efforts Abe and I put into learning what was basically a new car again and honing our setup, we were both immensely pleased to get a podium out of it. It’s the highest I’ve personally finished in iRacing special event. So when I pulled over in to the run off at turn 1 and disabled traction control, I did donuts on the rev limiter until the tires blew.