Hooniverse Asks: Why do people leave cars in the Woods?

I live in a rural area of New York State. There used to be a lot of dairy farms here, but most of them are shut down now. Apparently, when a farmer didn’t need a car anymore (or it broke down), they would just pull it into the woods with a tractor, and leave it there. Sometimes they used it as target practice, too. There are four such vehicles hidden around the woods surrounding my family’s property, and they’re all pretty interesting.

This was the first car I found. I suspect it’s been sitting for a very long time. At least 20-30 years. 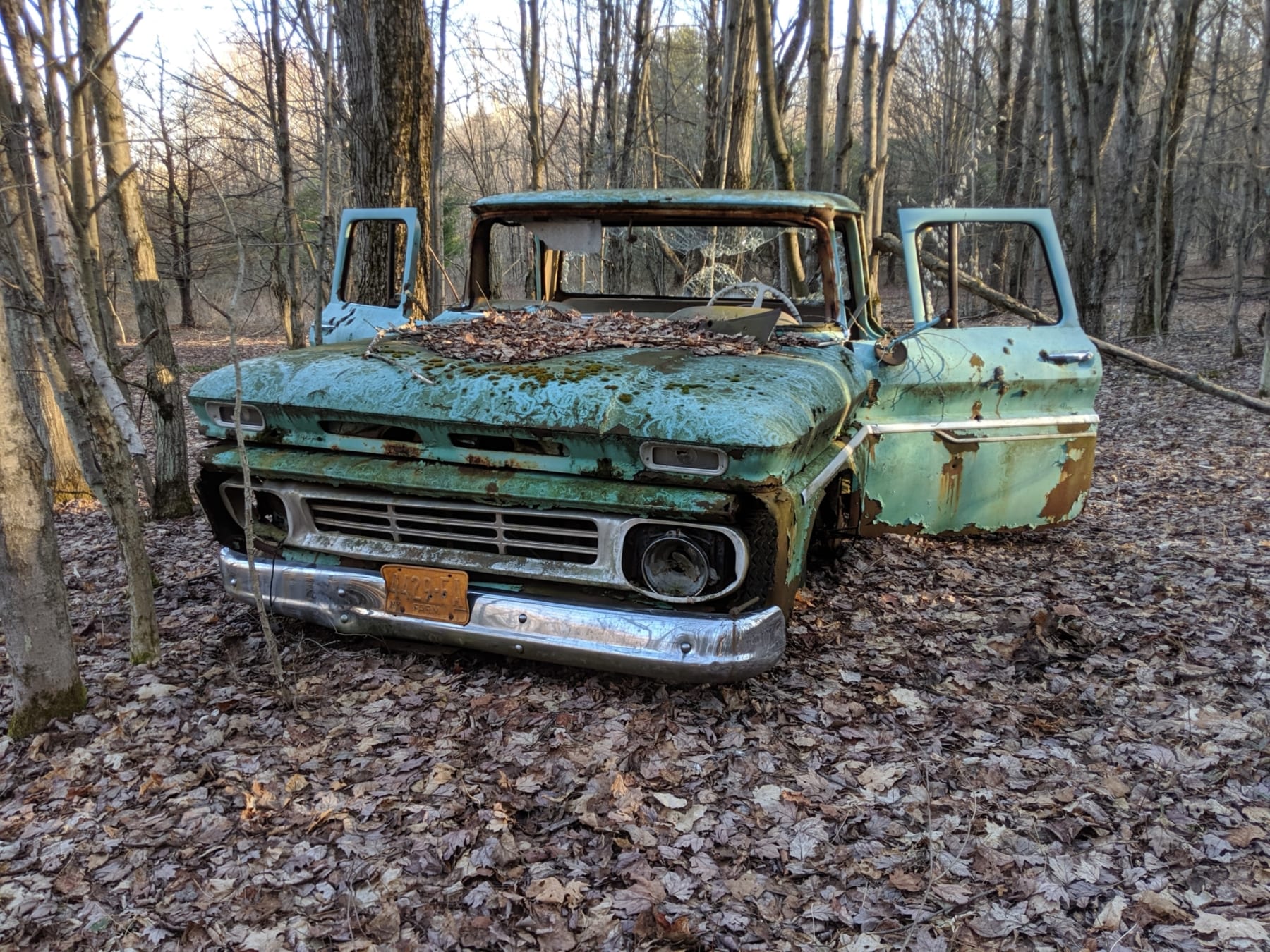 I suspect it has been here that long because there is a tree growing through the frame. 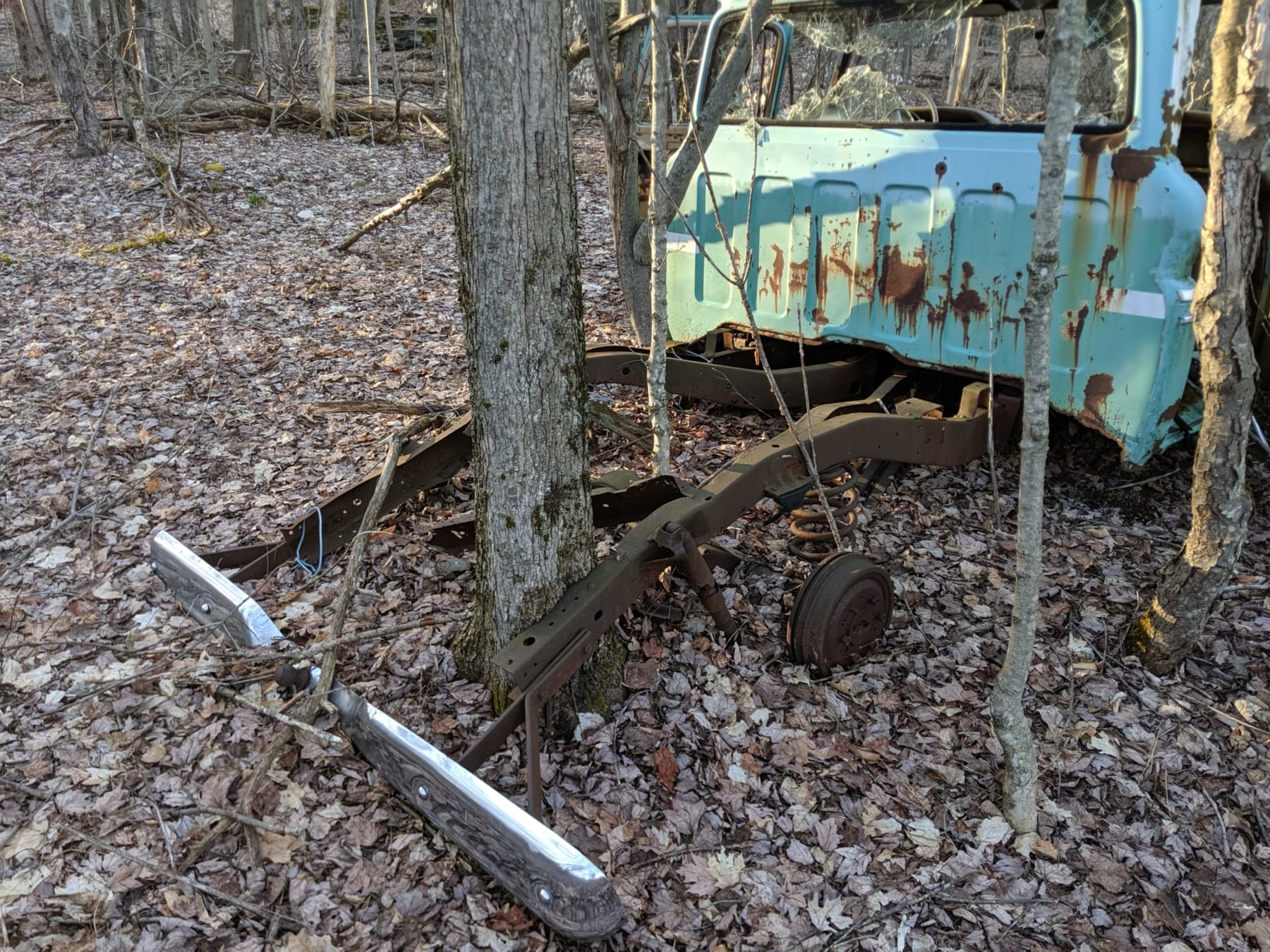 It was also used as target practice at some point. 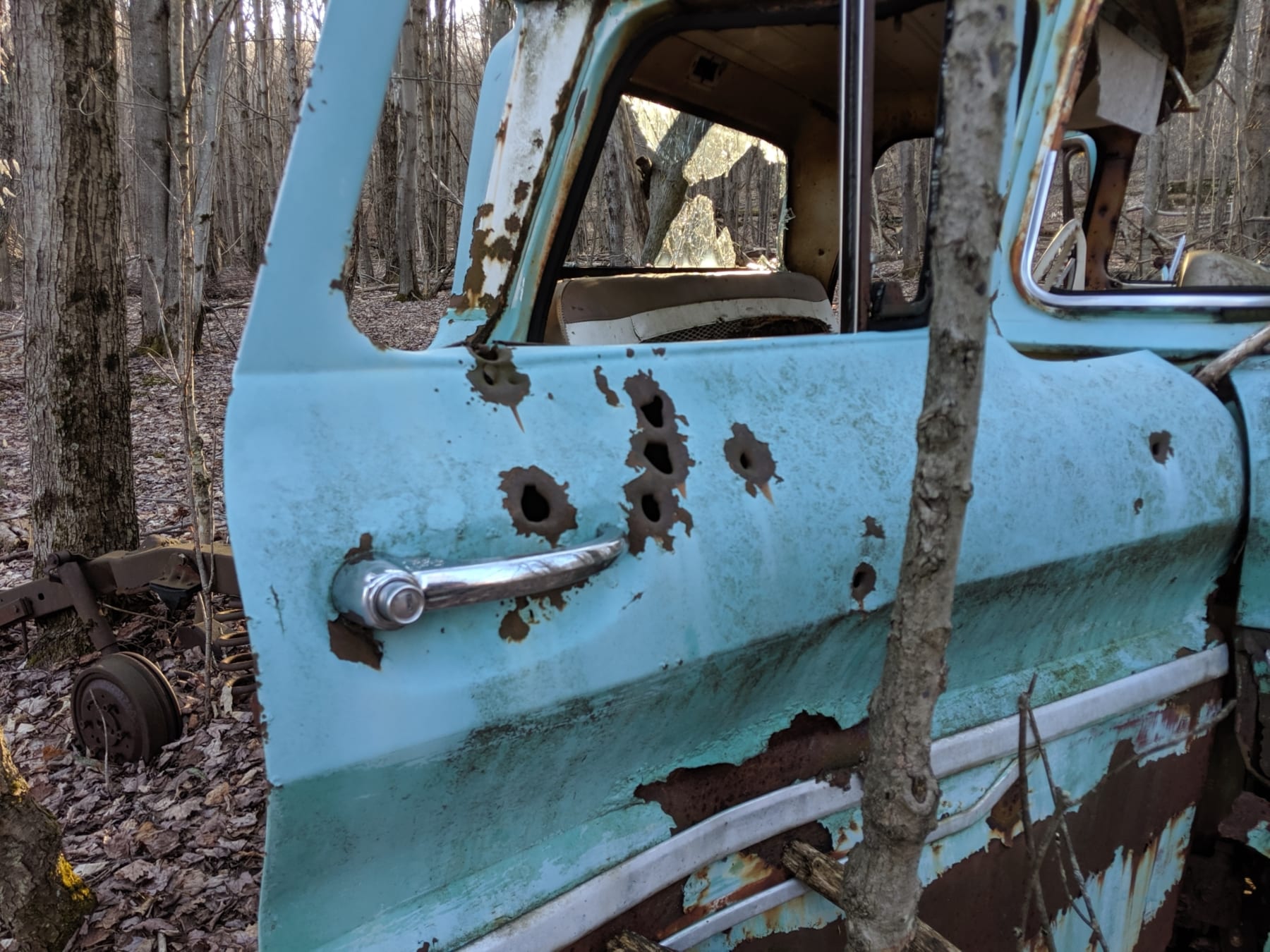 I wonder how much I could charge for this patina on the hood. Looks really cool. It’s definitely not fake. 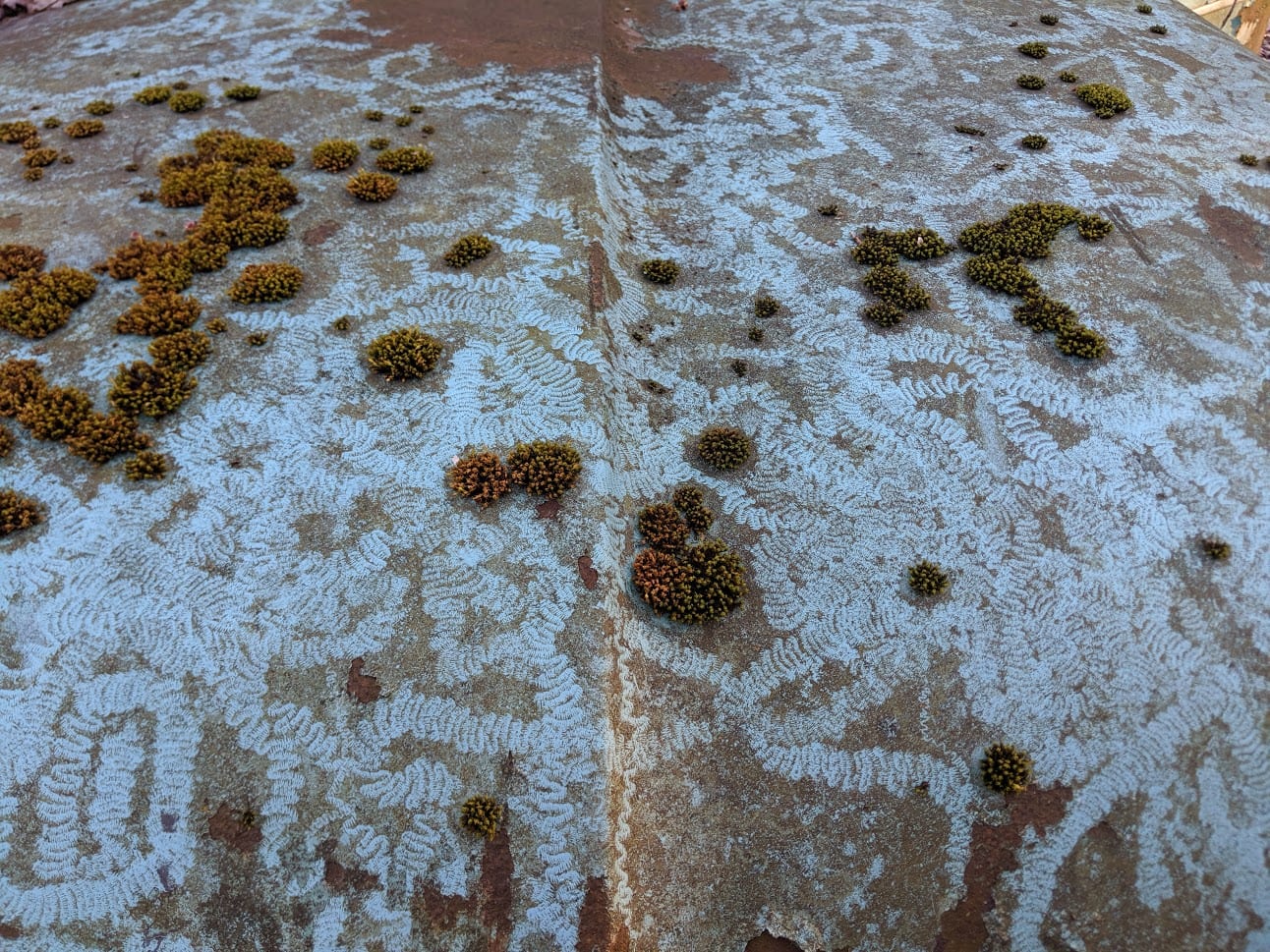 This thing is either a pre-war 1942 model, or it was built after the war from 1946-1948. Most companies just kept making their pre-war cars for a bit after the war. 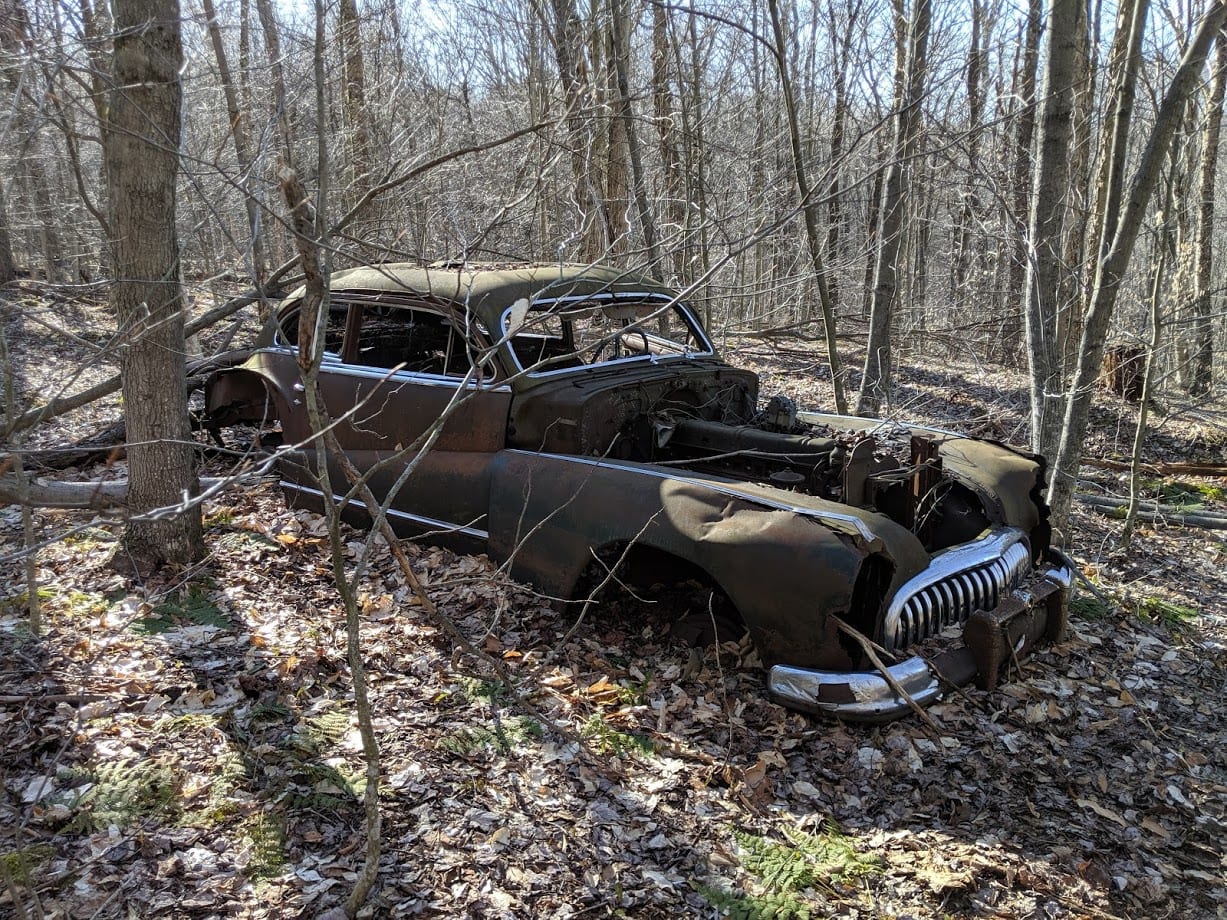 Most of this car is slowly sinking down into the earth–besides all of the chrome-plated stuff which is still going strong after more than seventy years. Pretty amazing. 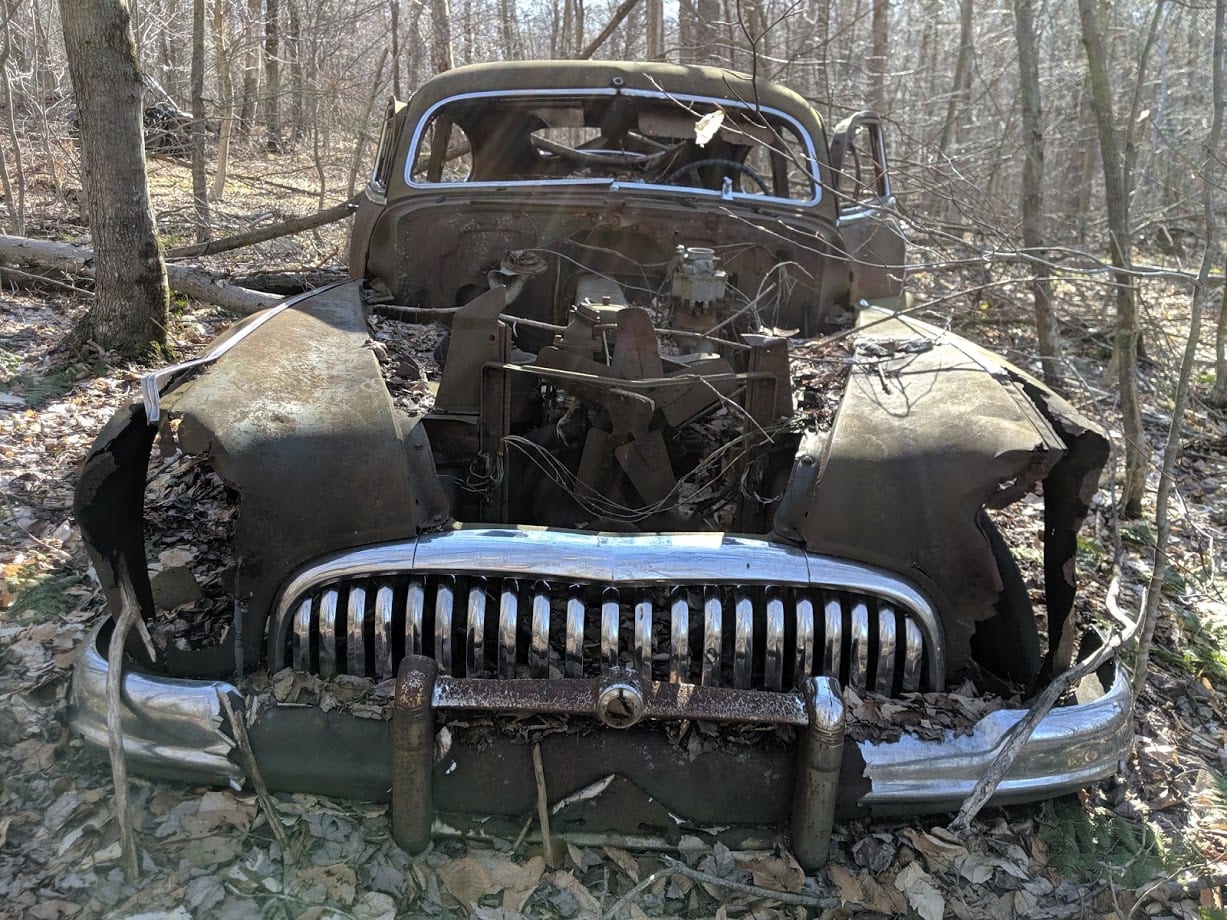 The hood was missing and I wondered where it went. After some sniffing around I found it. 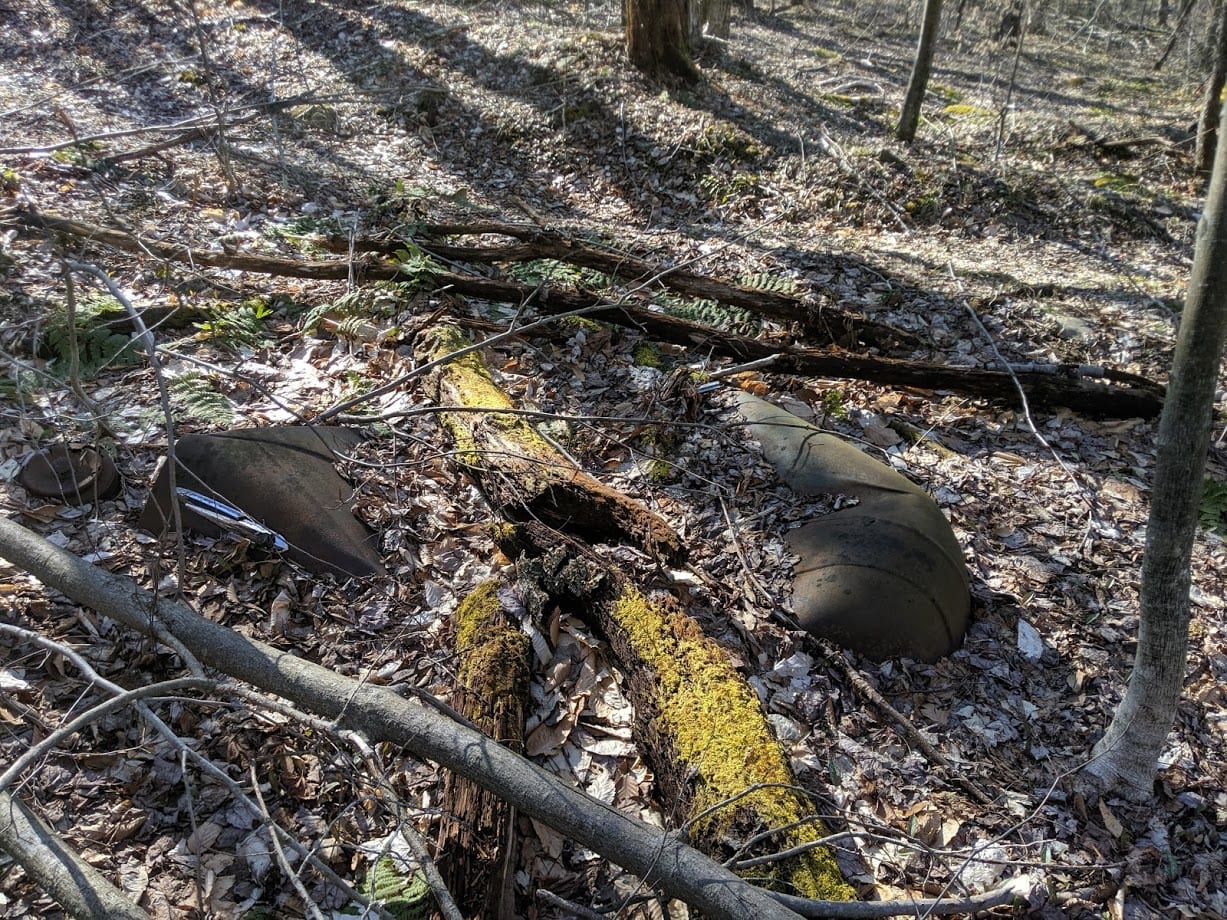 The interior was seriously deteriorated. I guess that’s where most of the organic material in the car was. 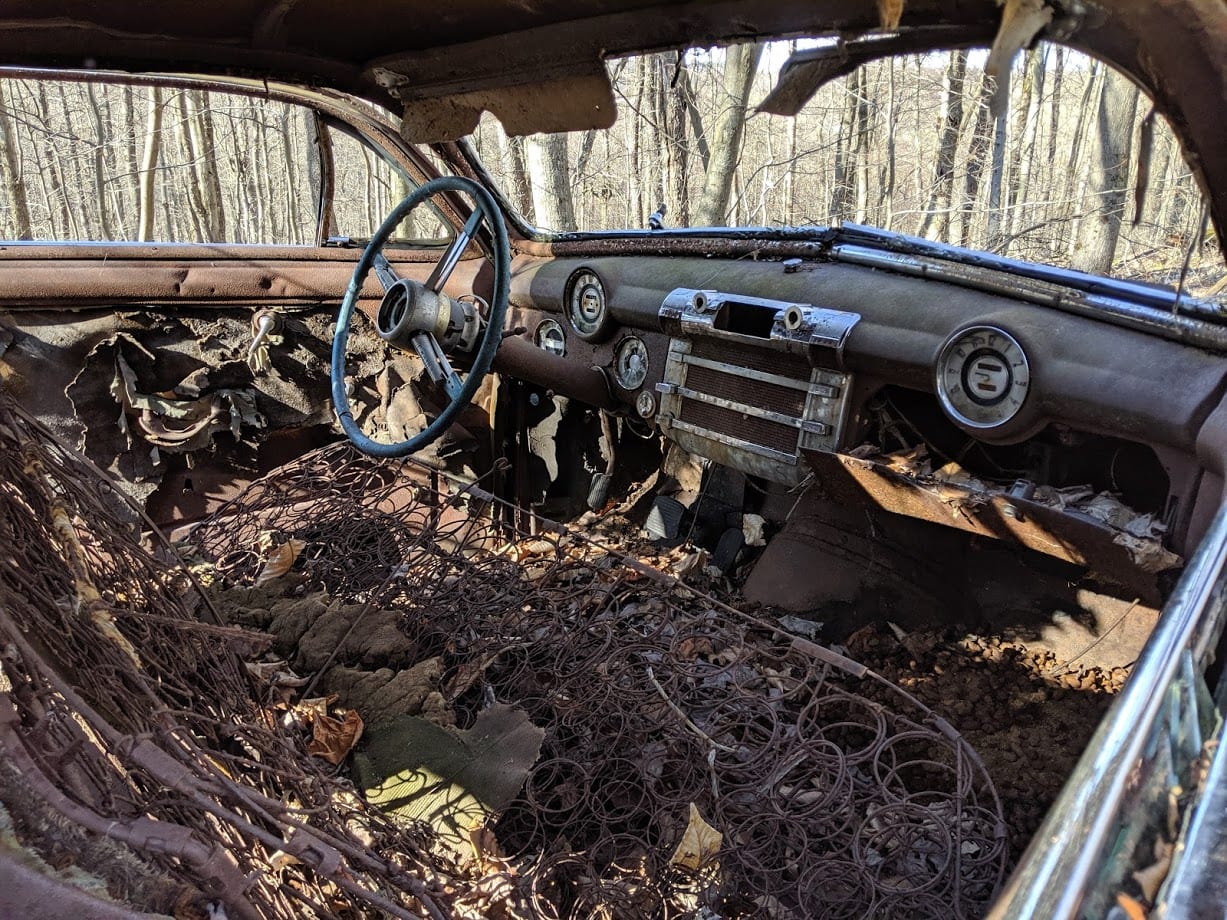 There’s only a bit of foam from the seat left, and a very small amount of fabric. most of the gauges were still in good shape, though. 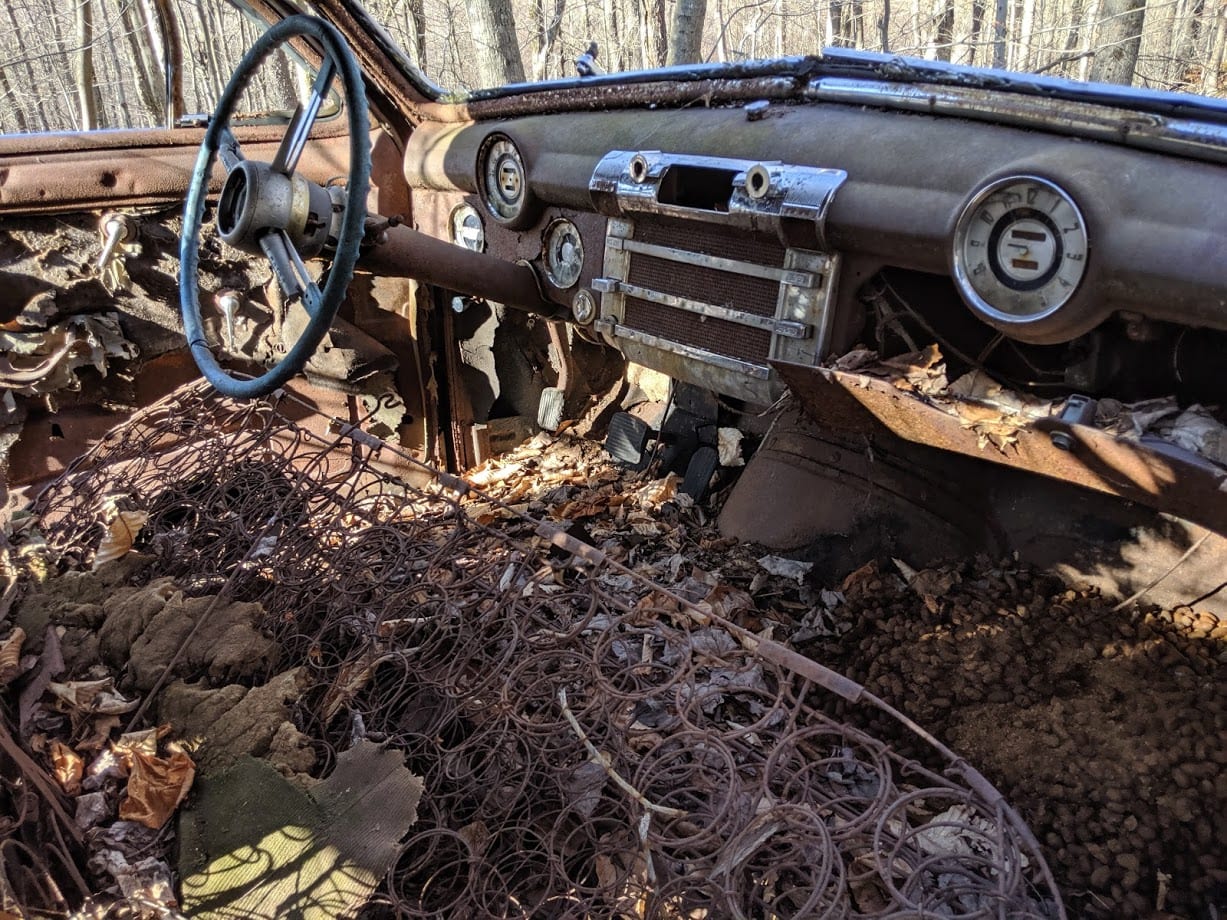 Judging by the enormous pile of shit under the glovebox, I would assume an animal has made a comfortable home out of this car. I really do find it amazing how well the chrome has held up after all of these years. Look at the lettering on the grille. Still visible. 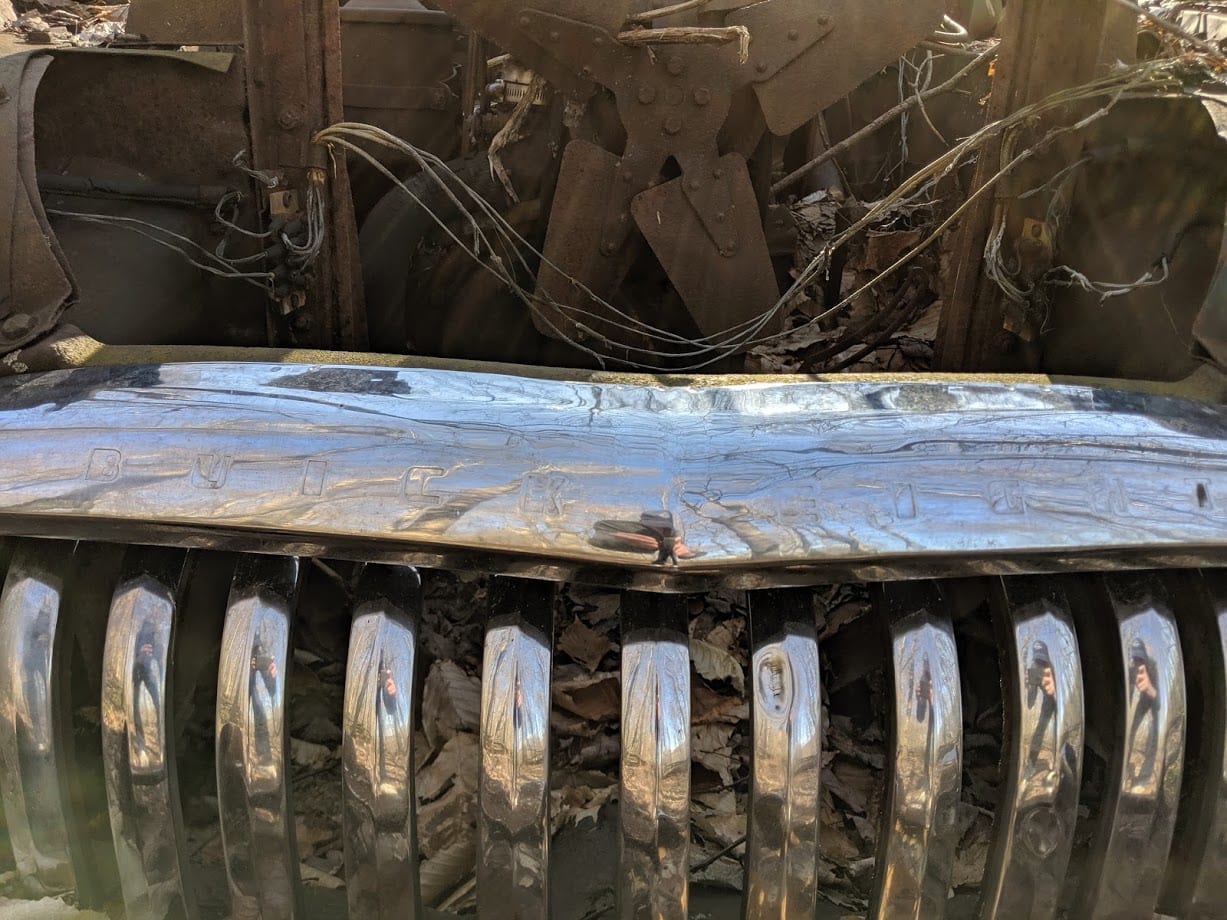 Really cool car to see just sitting in the woods. 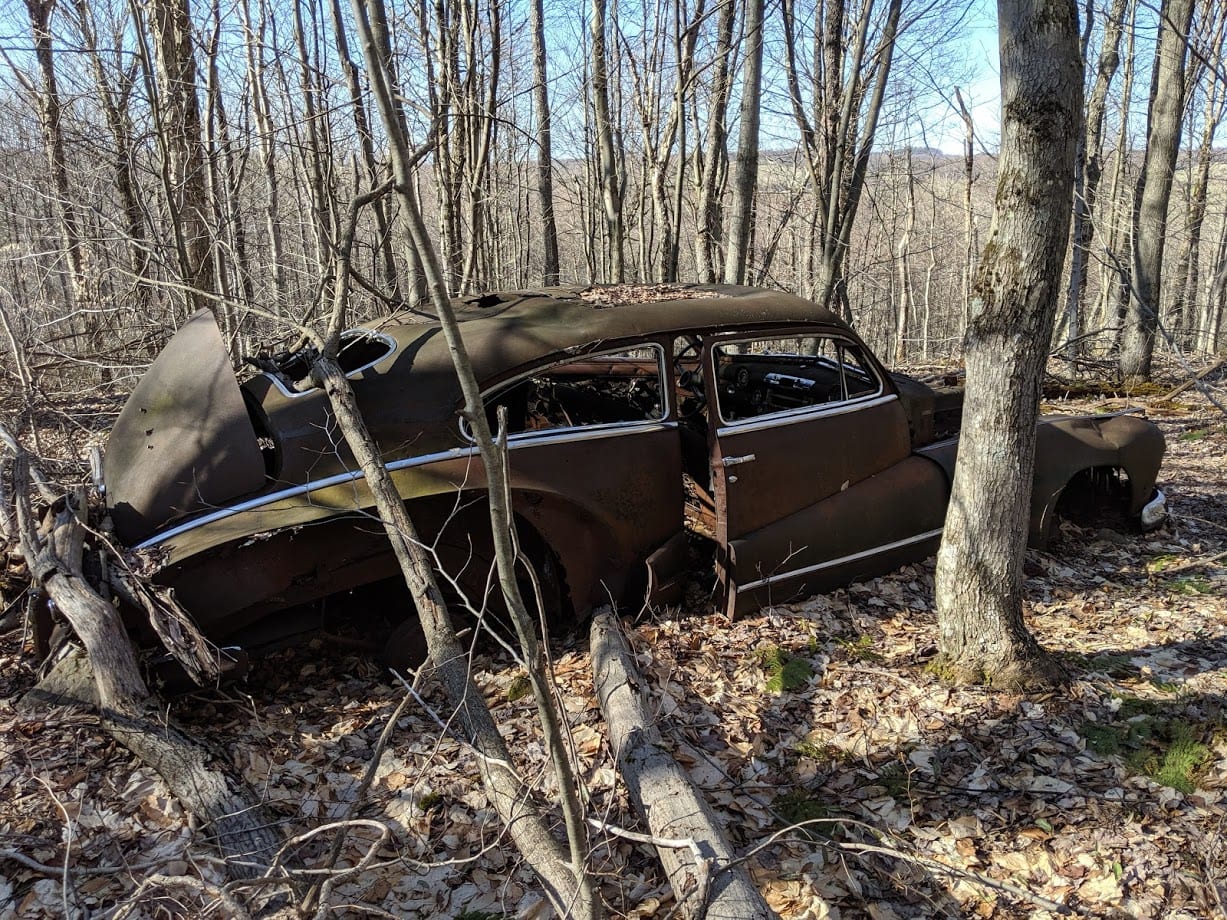 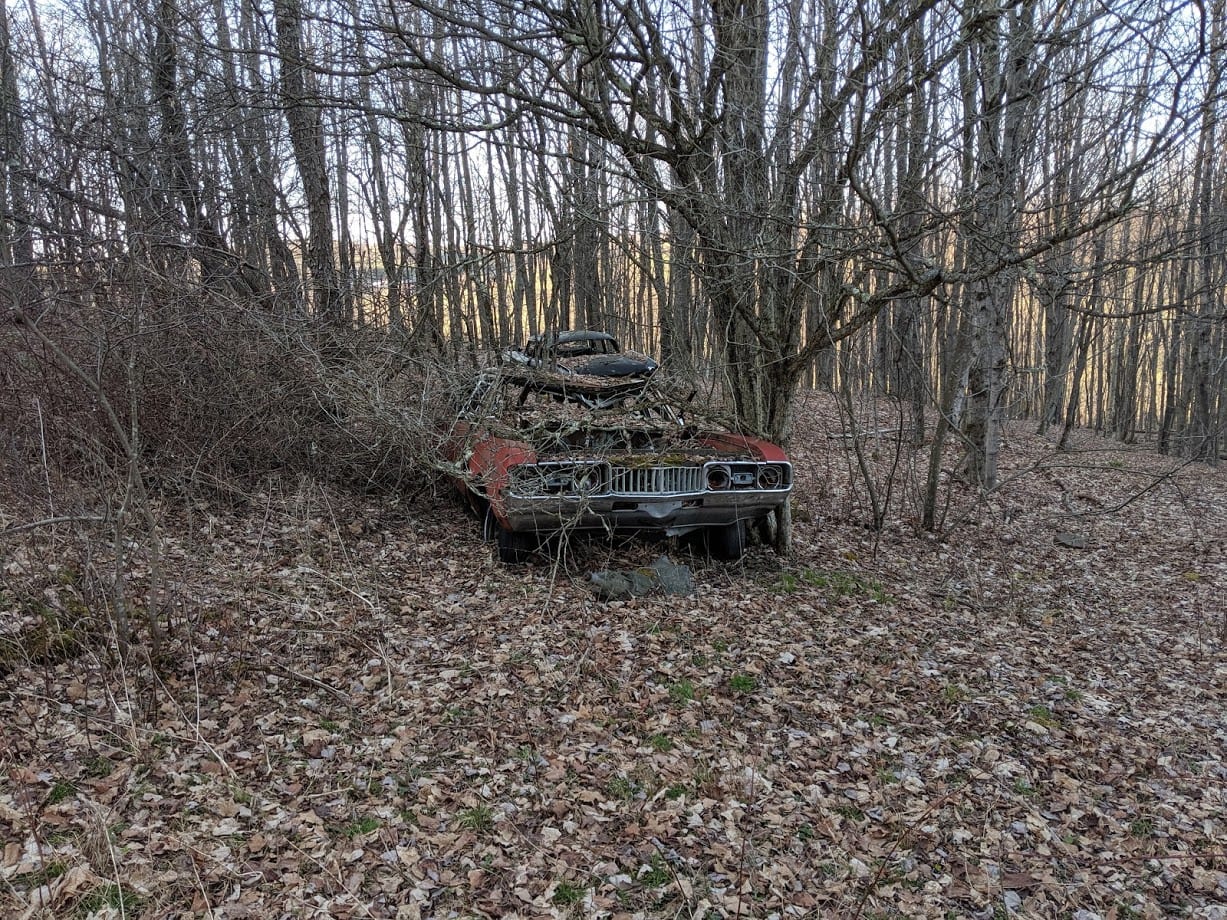 This particular Cutlass was missing its engine, but it appears to have puked its transmission out of the front fascia. 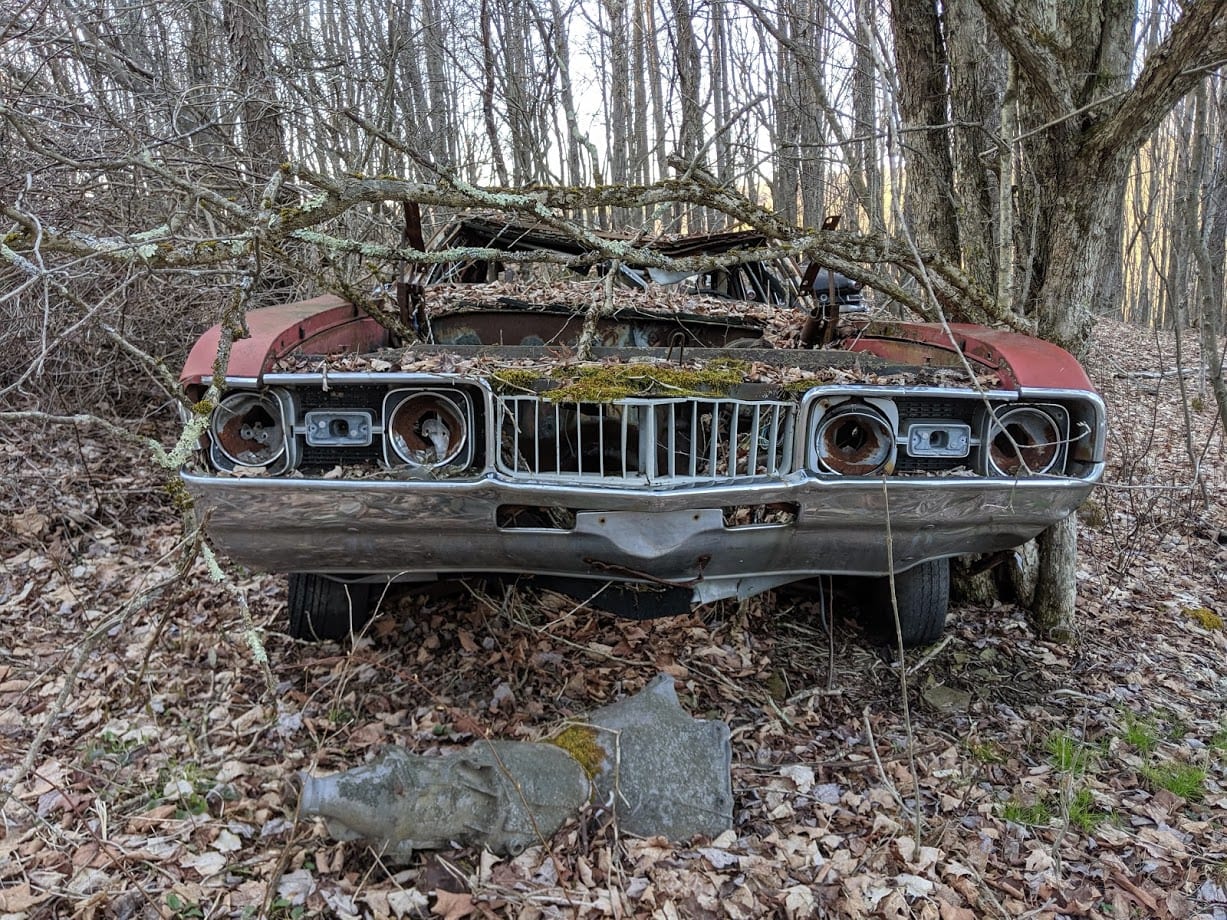 The rest of this car was in pretty sorry shape–besides the stainless steel hubcaps, of course. 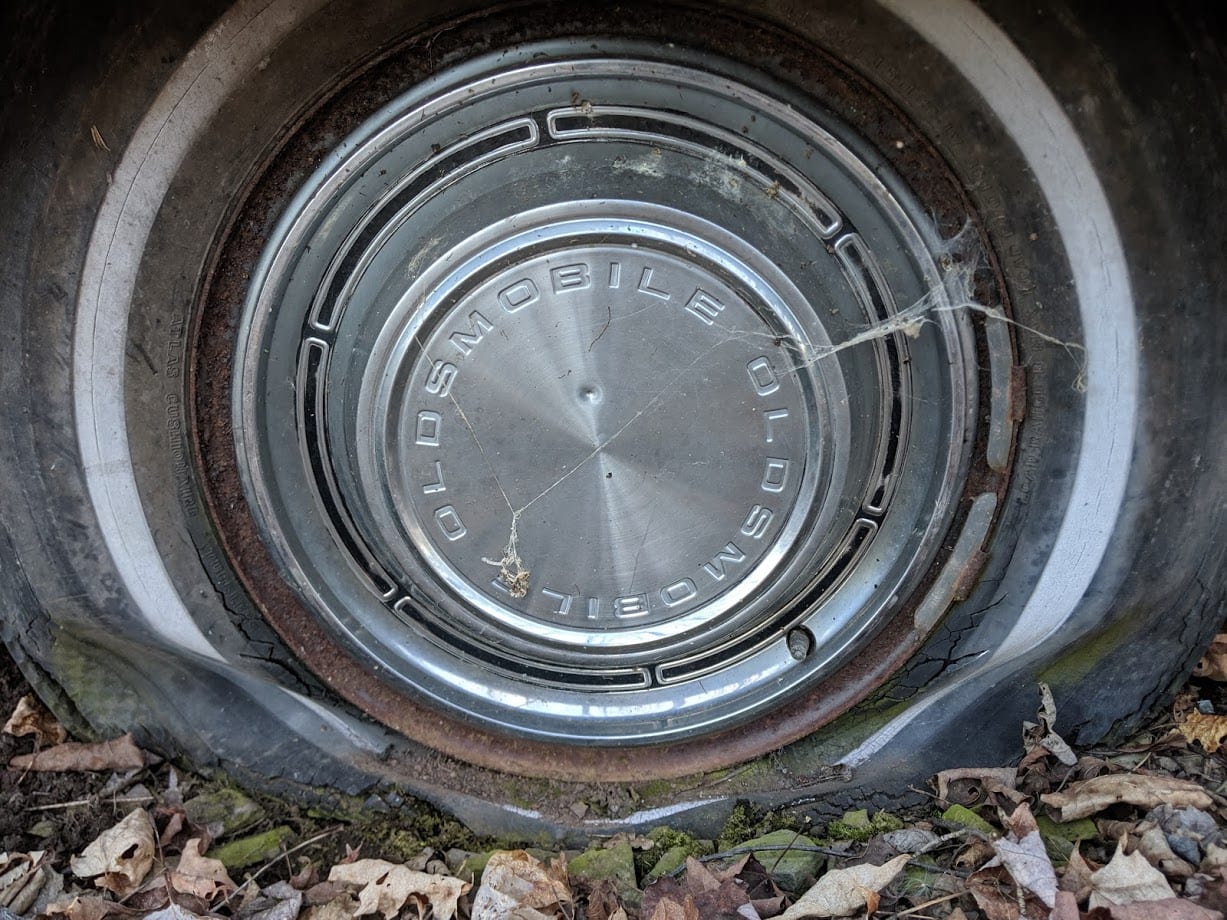 Neat badge. Decided to leave all of that sort of thing for somebody else to pry off with a screwdriver. 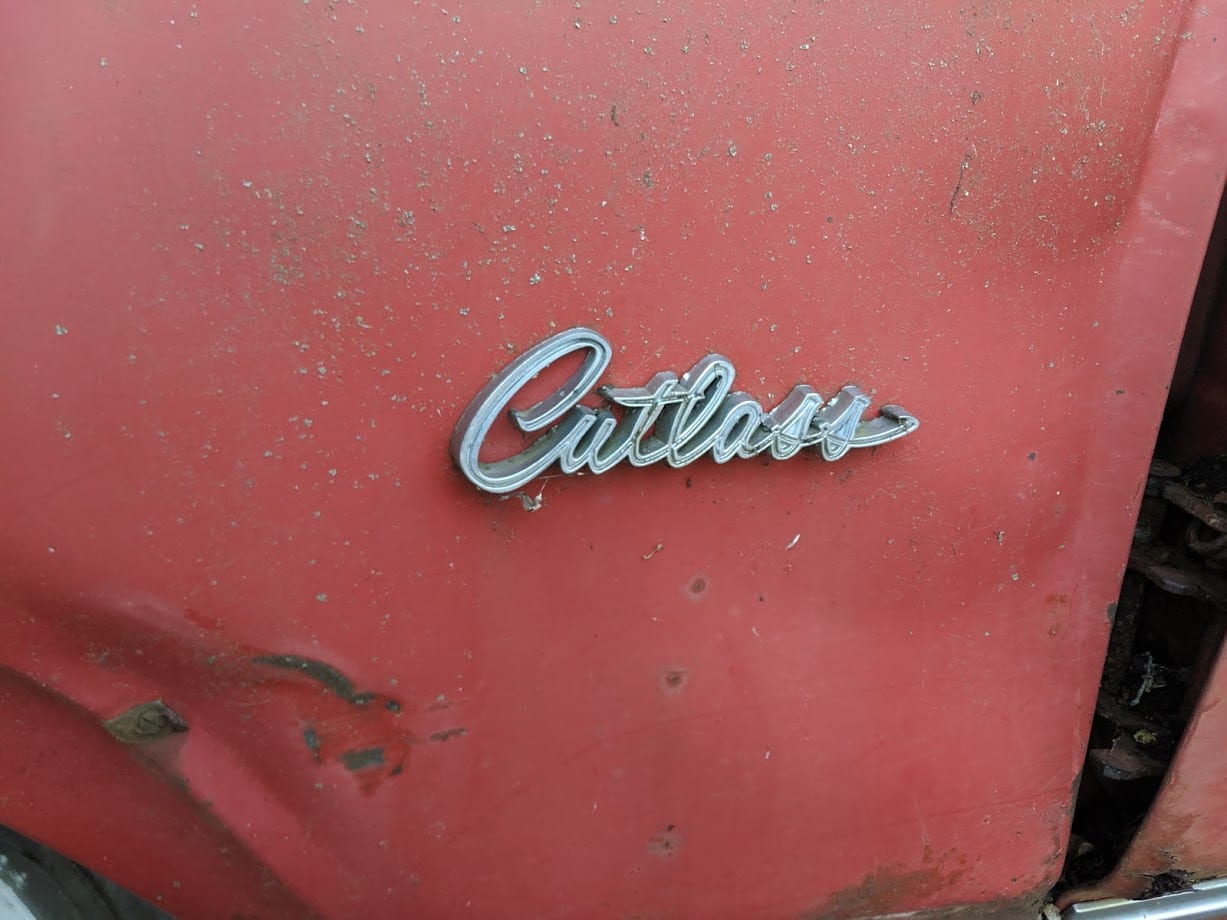 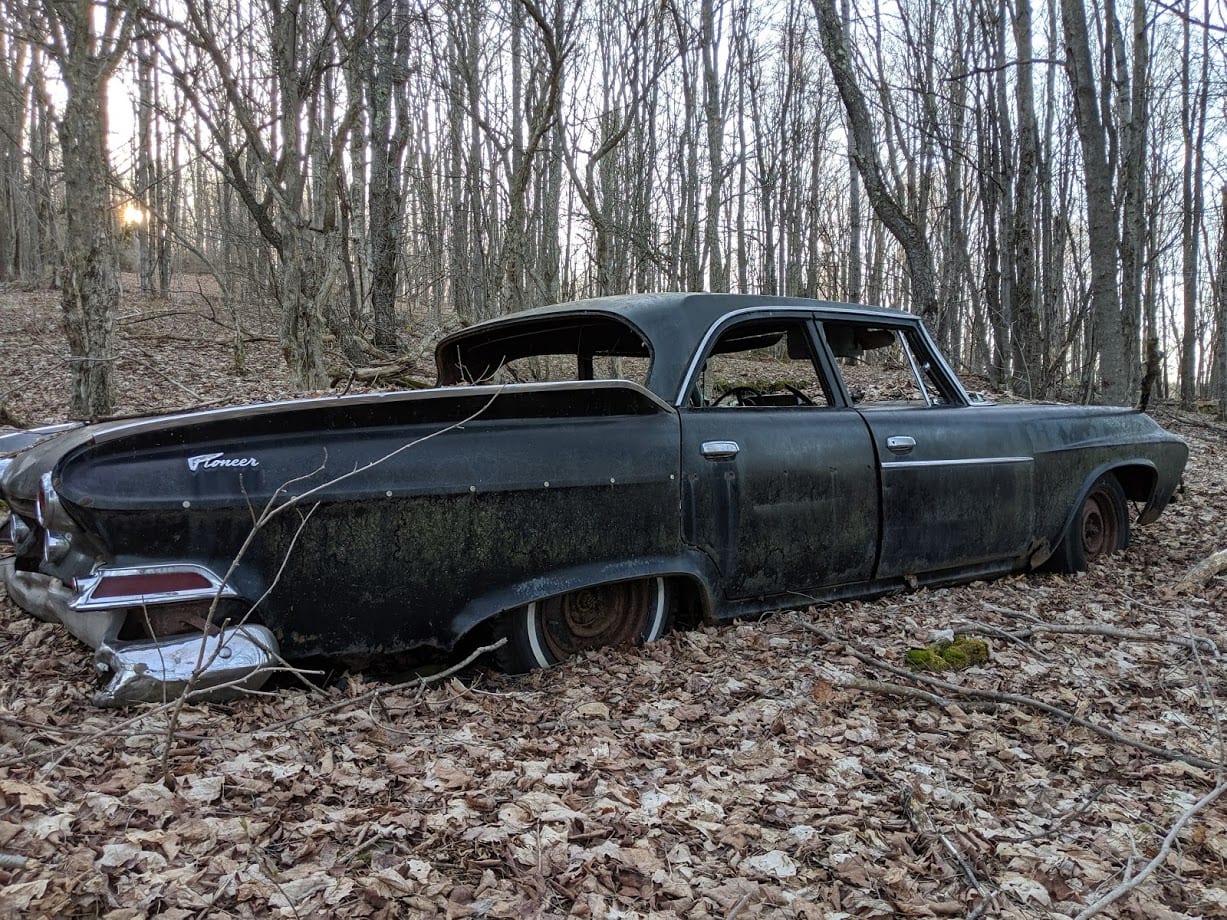 I had never heard of the Dodge Dart Pioneer before, but it’s a pretty cool bodystyle. 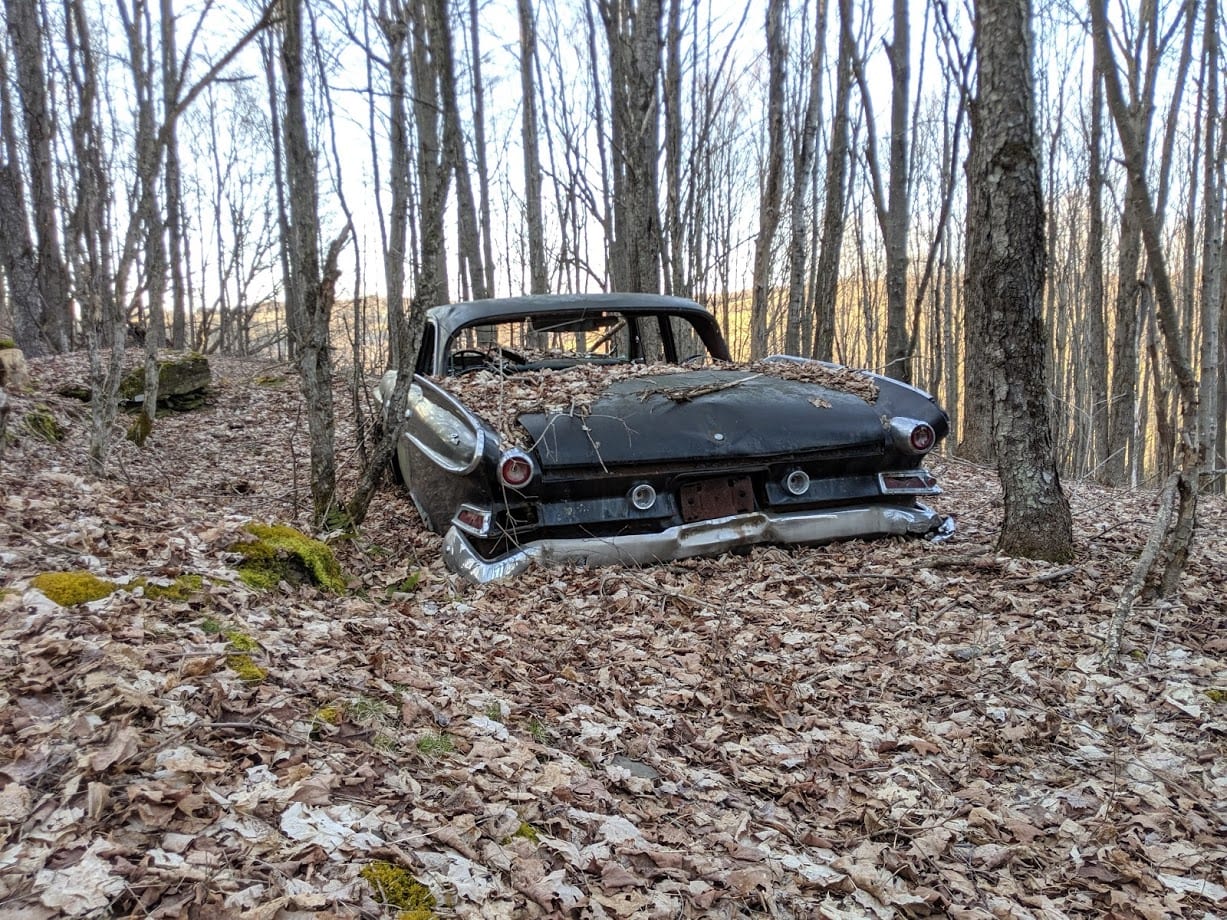 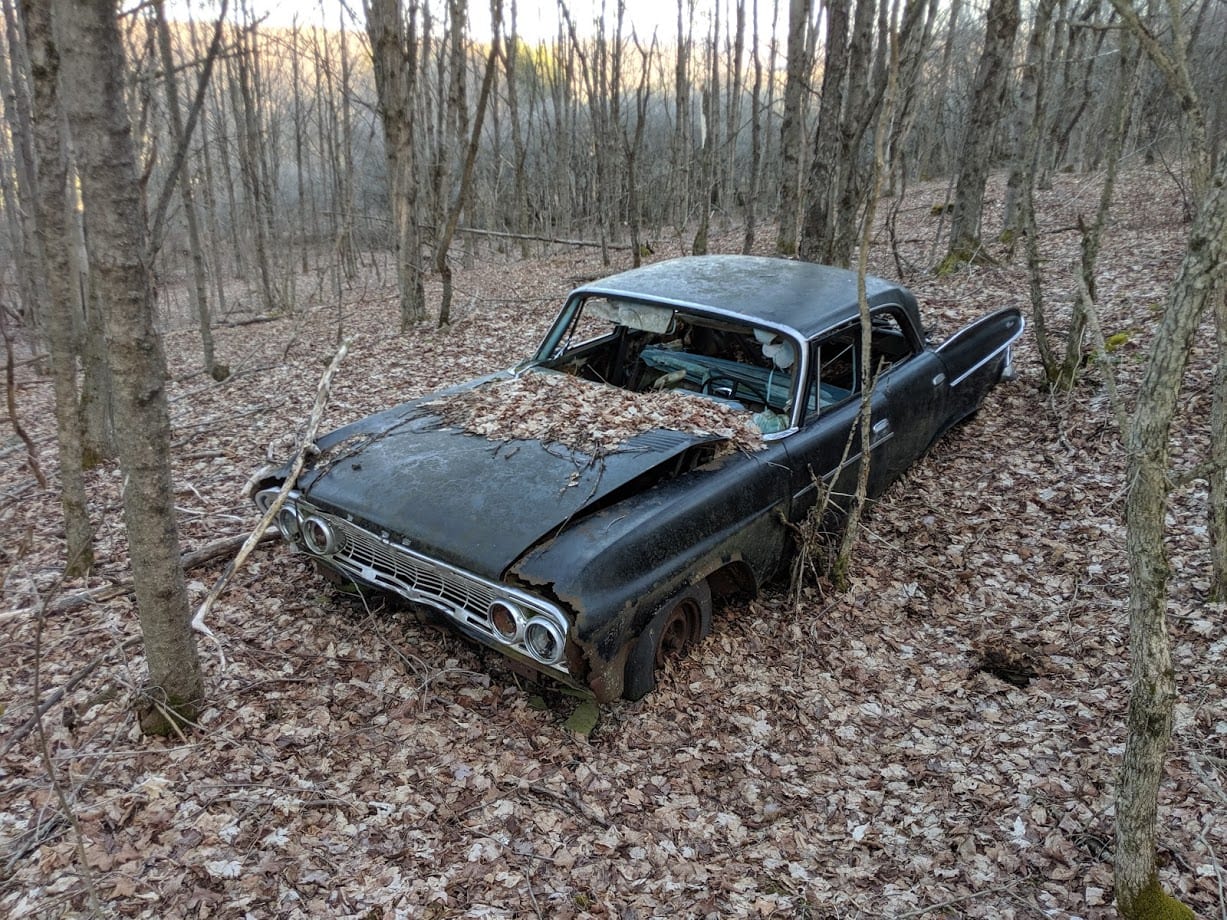 The interior of this car was really cool. Had a push-button shifter with tons of chrome. 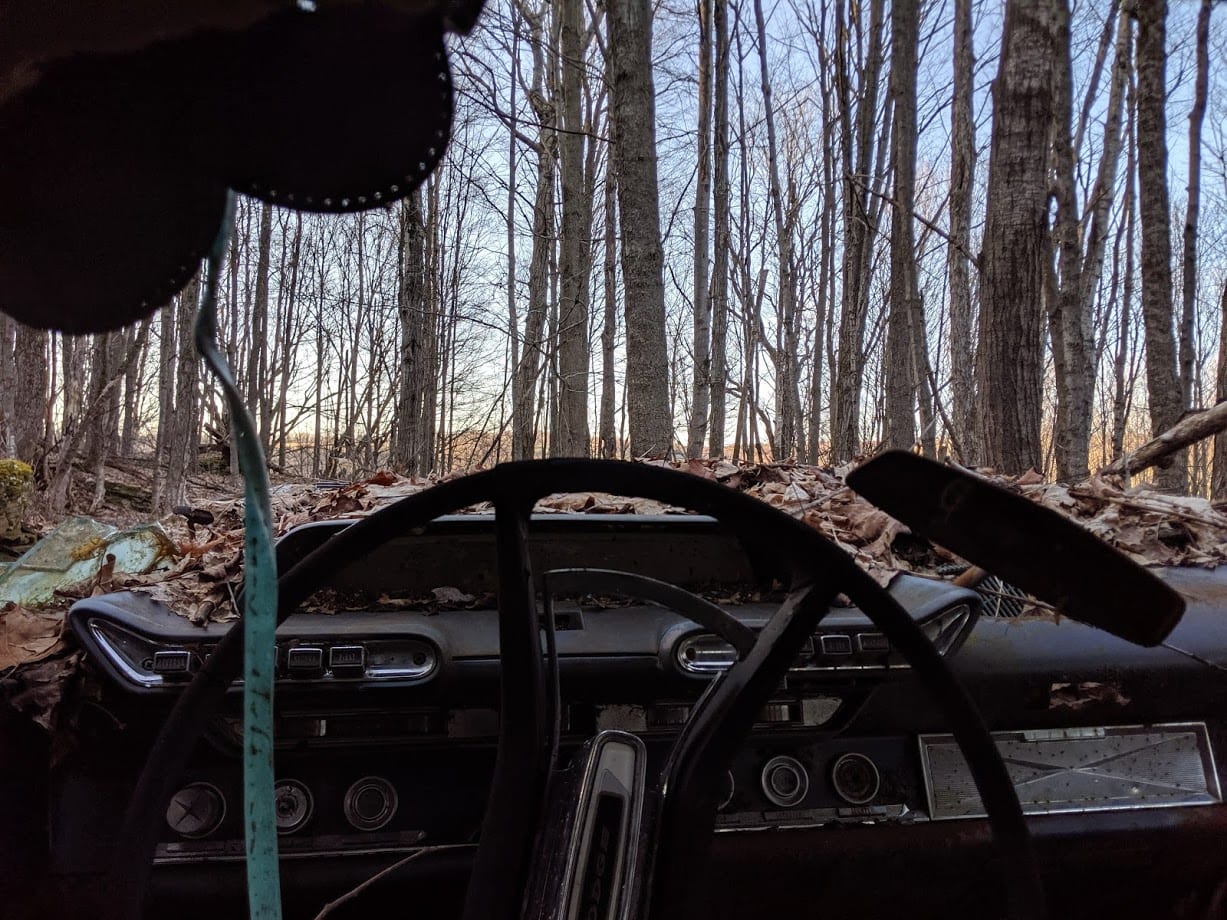 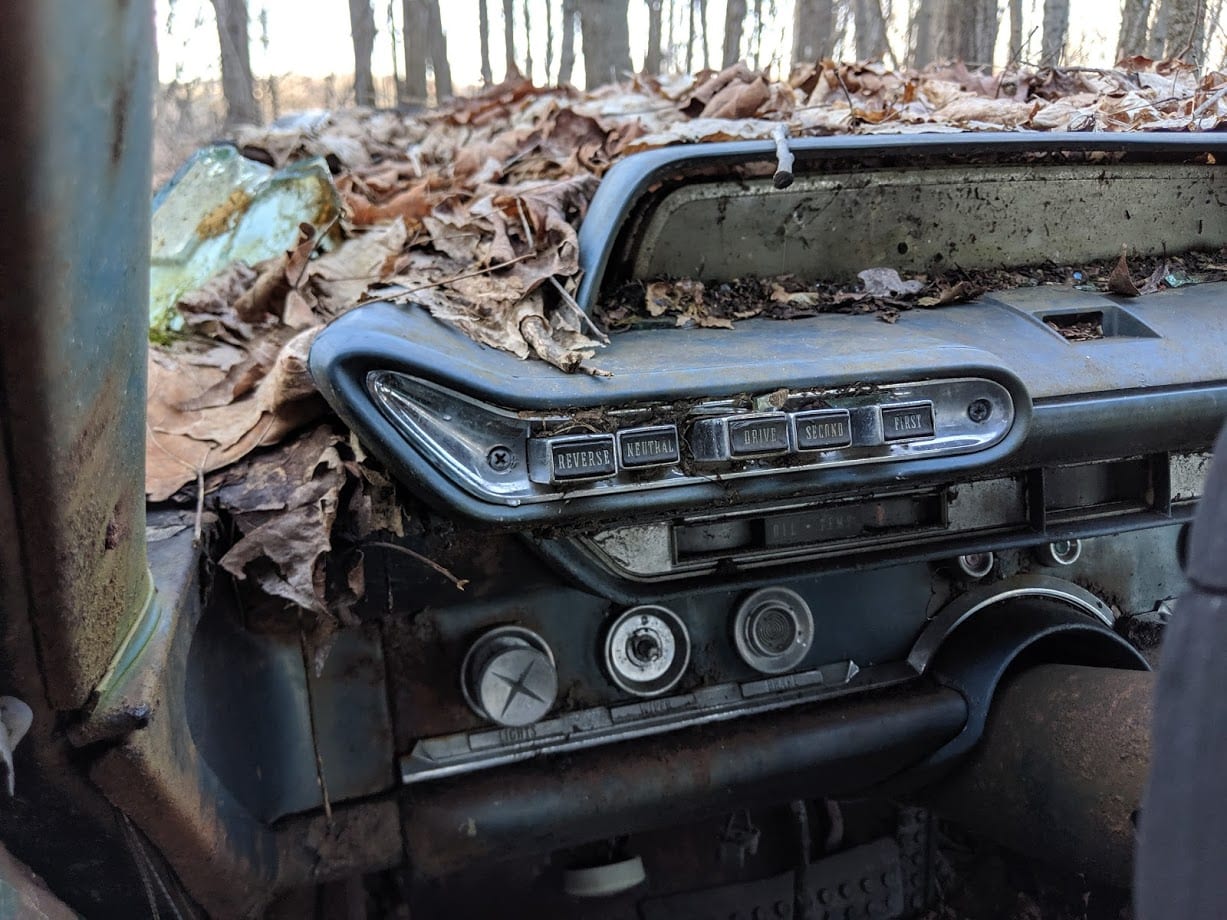 Engine was still in it, too. Nothing great–dingly little iron slant six. 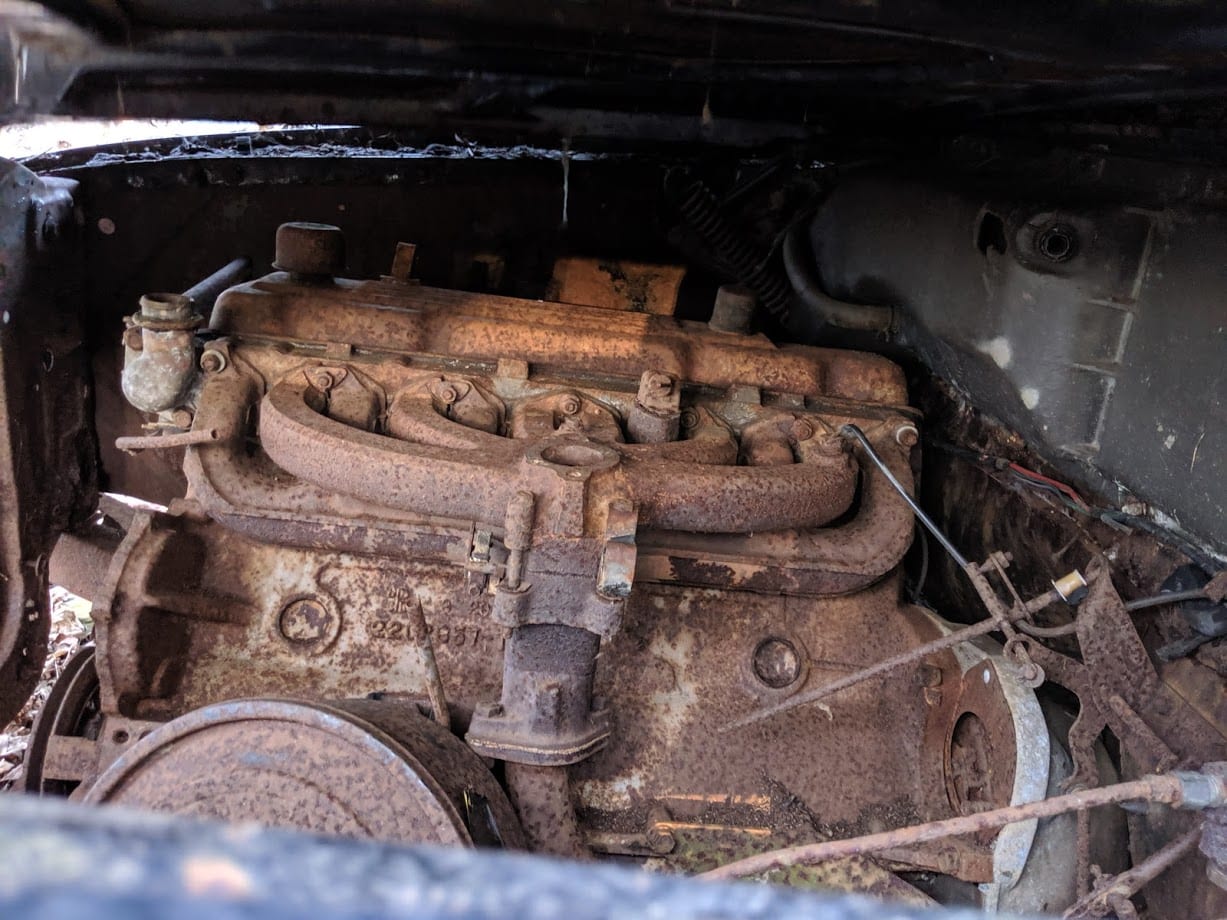 Badge on these is cool. Very fifties/early sixties. 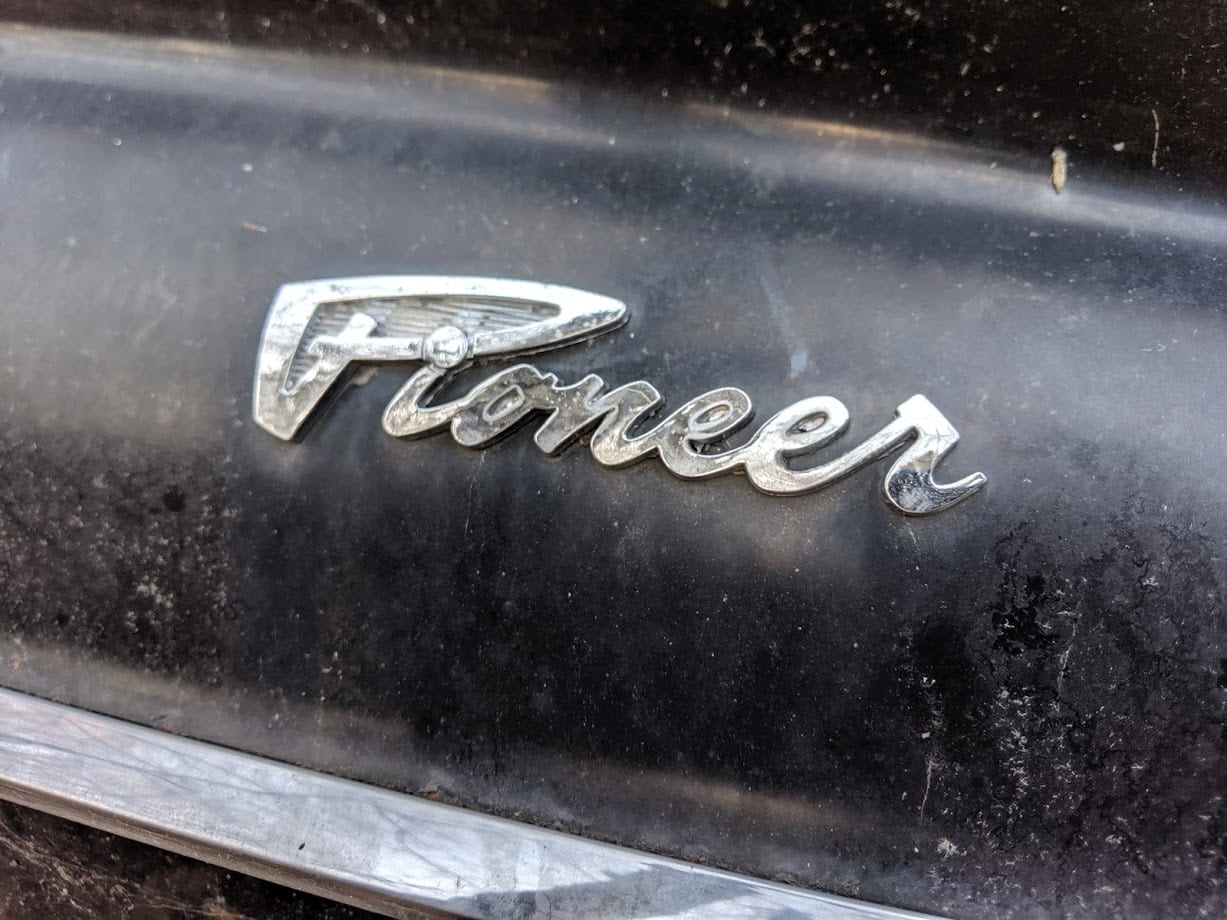 Do you have any cool abandoned cars near you?

This seems like a good thing to do right now. Just wander around in the woods looking for derelict automobiles. Maybe you have something like this around you. Share it in the comments if you got it.