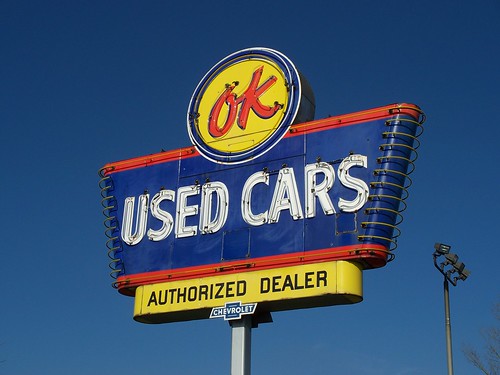 Whether it was through a dealer, craigslist, or calling the number on a For Sale sign in the window of a street-parked ride, we’ve all had some less than wonderful experiences with buying a car. Some of them just leave a bad taste in your mouth. Some, make you question the fate of humanity- let’s hear about those.

When I last bought a new car the experience was pretty painless as the dealership was offering employee pricing so there wasn’t much haggling over the sticker. They were also giving away free hot dogs and hamburgers to prospective customers, so we got lunch out of the deal to boot. But that didn’t mean that I let my guard down, and sure enough, when we went in to sign the final paperwork, they tried to add-on a bunch of unnecessary crap- okay then- it looks like I can cut you a real deal on that undercoating donchaknow. The finance woman tried to sell us LoJack, saying that the car didn’t have any form of anti-theft whatsoever despite the fact that the owner’s manual I had been reading while waiting for them to get the paperwork ready stated that the car came with a chipped key and had an ignition interlock to prevent theft. Oh well- next.

She then pushed the three-hundred dollar Scotchguard treatment for the interior. When I noted that it was the leather interior, she said it worked on that too. Whoa-boy. We got out without paying for any of the last-minute add-ons despite her dire warnings and today, 5 years later, the car remains un-stolen and the leather is still unsullied.
So that was my somewhat lousy experience (and it should be noted that the dealership remains a great place for service, having never attempted to rip me off). Have you had worse? If so, tell it- it’ll be a cathartic experience.
Image sources:[Flickr, Vlane]