Grace Kelly’s Father’s Original, Unrestored Packard Is Sitting Outside Their Philadelphia Home. It was Last Driven in 1956.

The former home of the late Princess of Monaco and famous actress, Grace Kelly, is a stones-throw from where I attend college. Today, avoiding roadwork, I passed by their family home (now owned by her son, the prince of Monaco), only to see this: 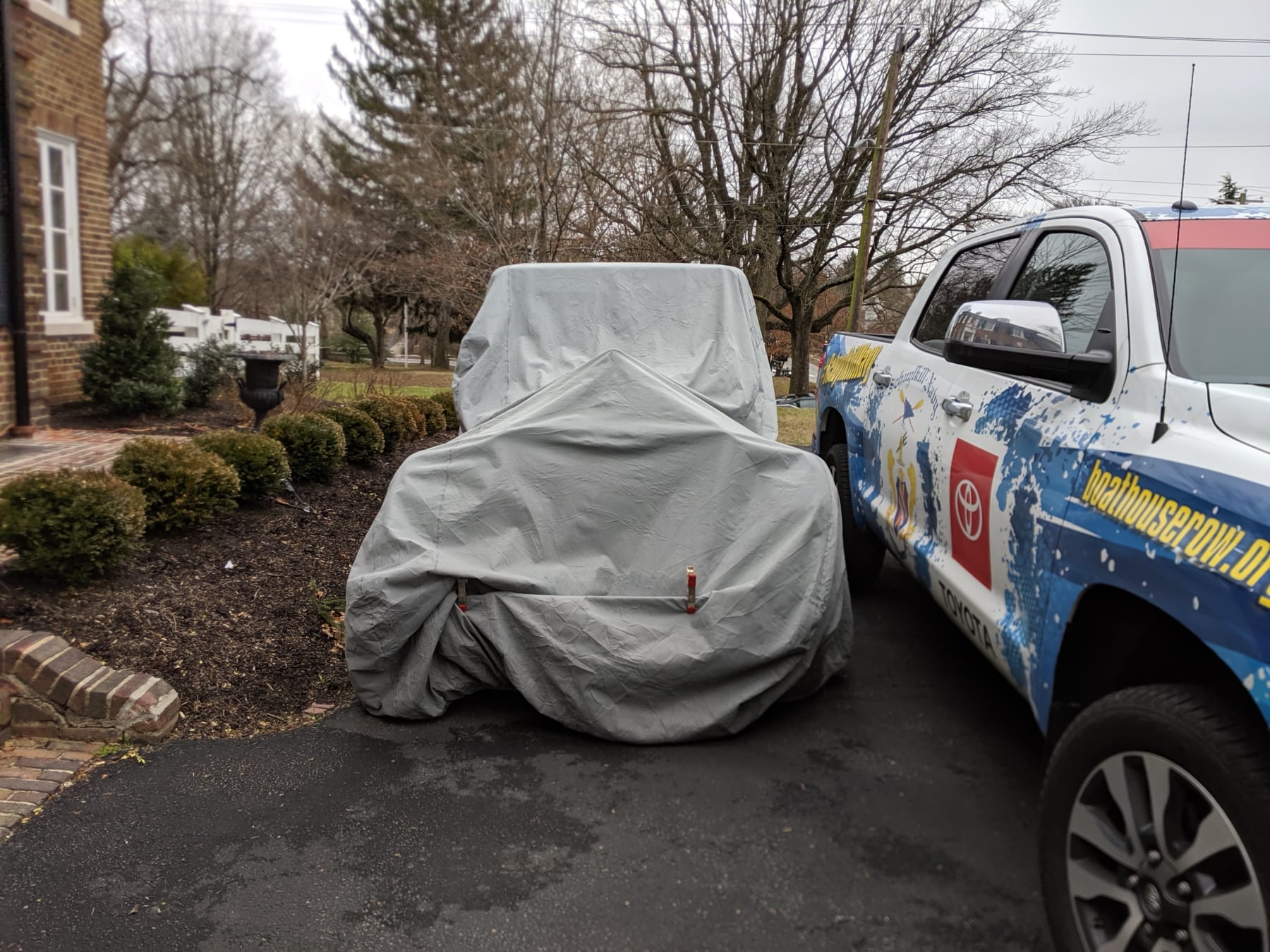 I walked up the driveway seeing nobody in view, and took a few pictures of the covered vehicle. I was curious, but I didn’t want to be too nosy. Walking back to my car I thought to myself, “What would an actual journalist do?”

Still having no idea what an actual journalist would do, I walked back to the side of the house, to see a man in work clothes sawing a 2×4 in half with a reciprocating saw. I yelled to him;

“Do you know what that car out front is? Under the cover?”

“The car out front, under the cover! Do you know what it is?”

He put down the saw and walked a little closer.

“I think it’s a Studebaker.”

I thought for a moment. The Kelly family wouldn’t have owned a Studebaker.

“Is there somebody here who uh… Runs the place?”

The man informed me there was, but he didn’t know where this ‘man who runs the place’ had gone. He suggested I check around front, so I did.

Peering into a window, I saw this ‘man who runs the place’ eating lunch. He was very focused on his bowl of noodles, so I walked in front of a window and waved my arms around. He looked up, and I pointed to a side door. Thankfully, he came outside.

We shared introductions, and he informed me the car underneath was indeed not a Studebaker.

It was a Packard.

“Is it?” I responded, excited.

I asked If I could see it which, to my surprise, he said yes.

Ask the man who owns one

He peeled back the cover a little… 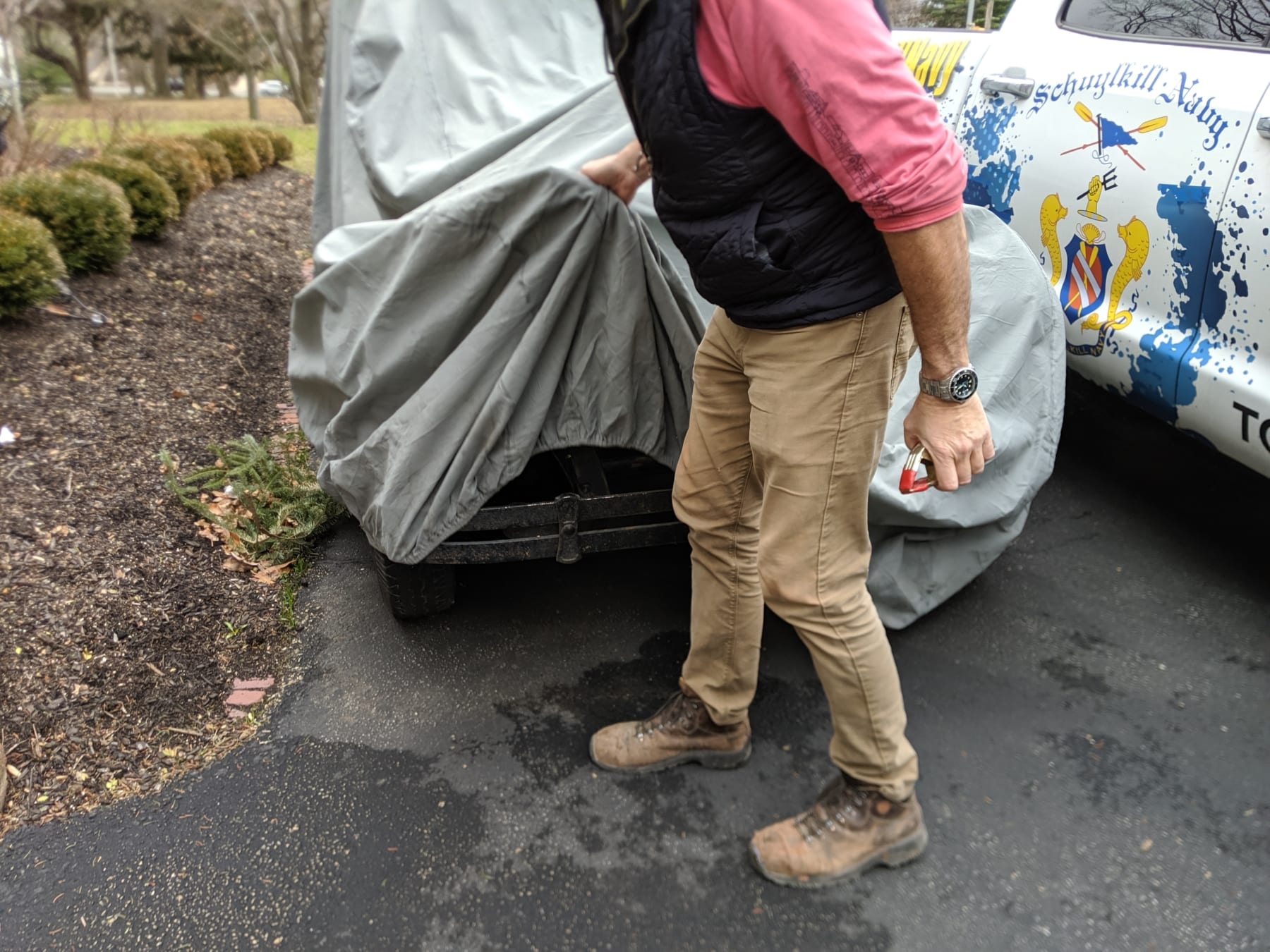 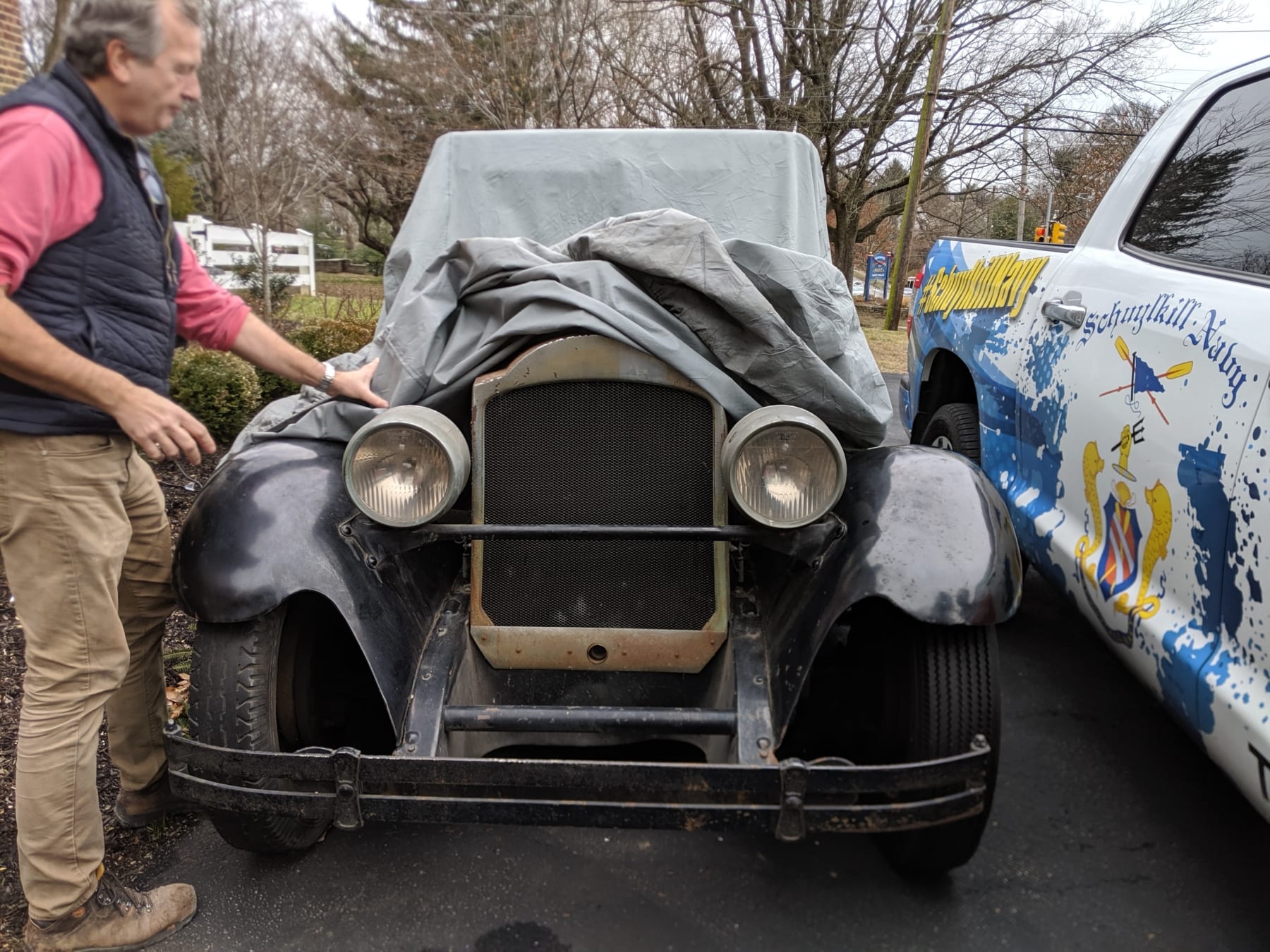 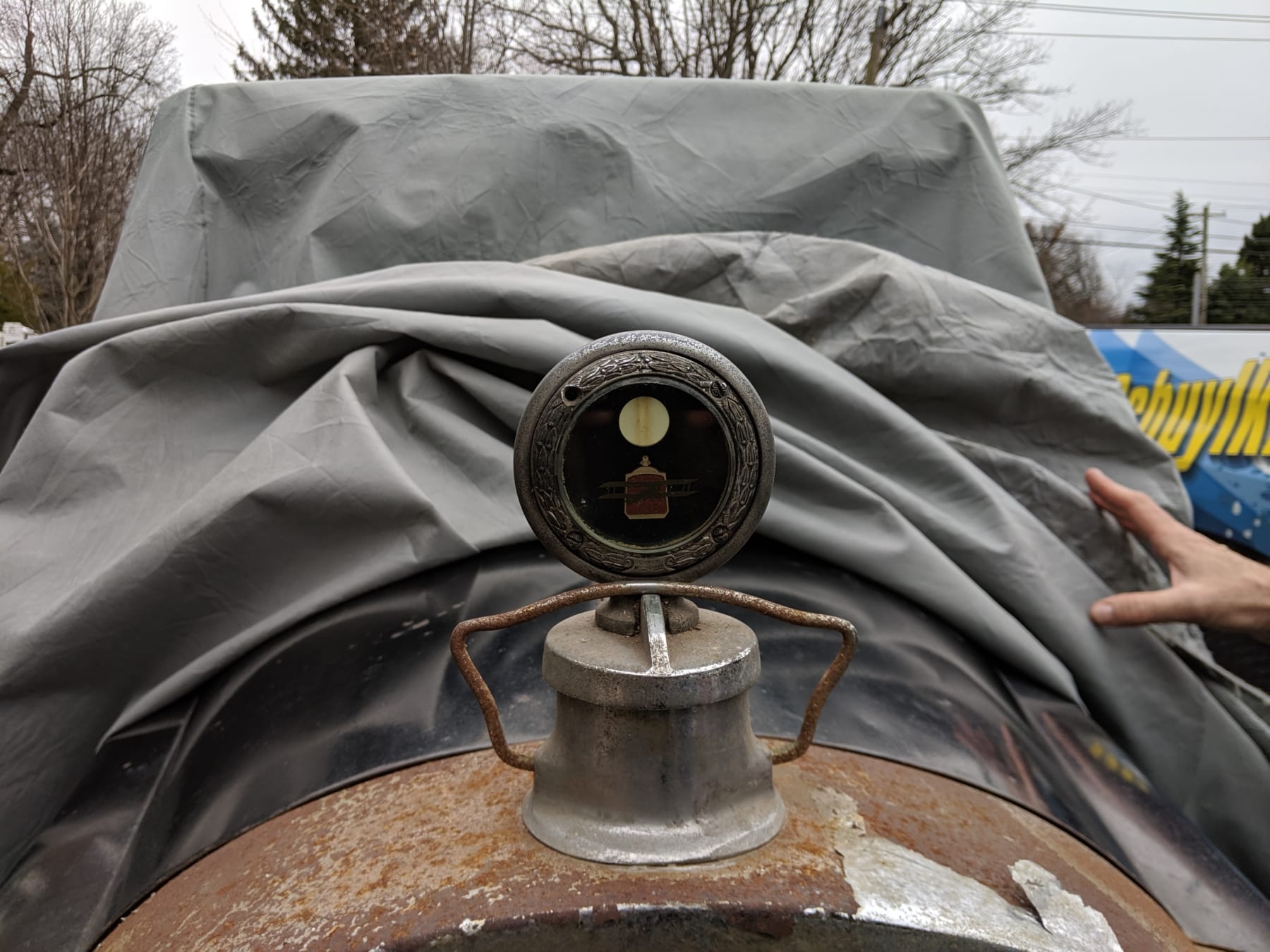 He informed me it was now owned by a friend of the Kelly family, however the car was originally driven by Grace Kelly’s father, John B. Kelly. Perhaps not coincidentally, John B. Kelly had built the Packard building in downtown Philadelphia a few decades earlier. 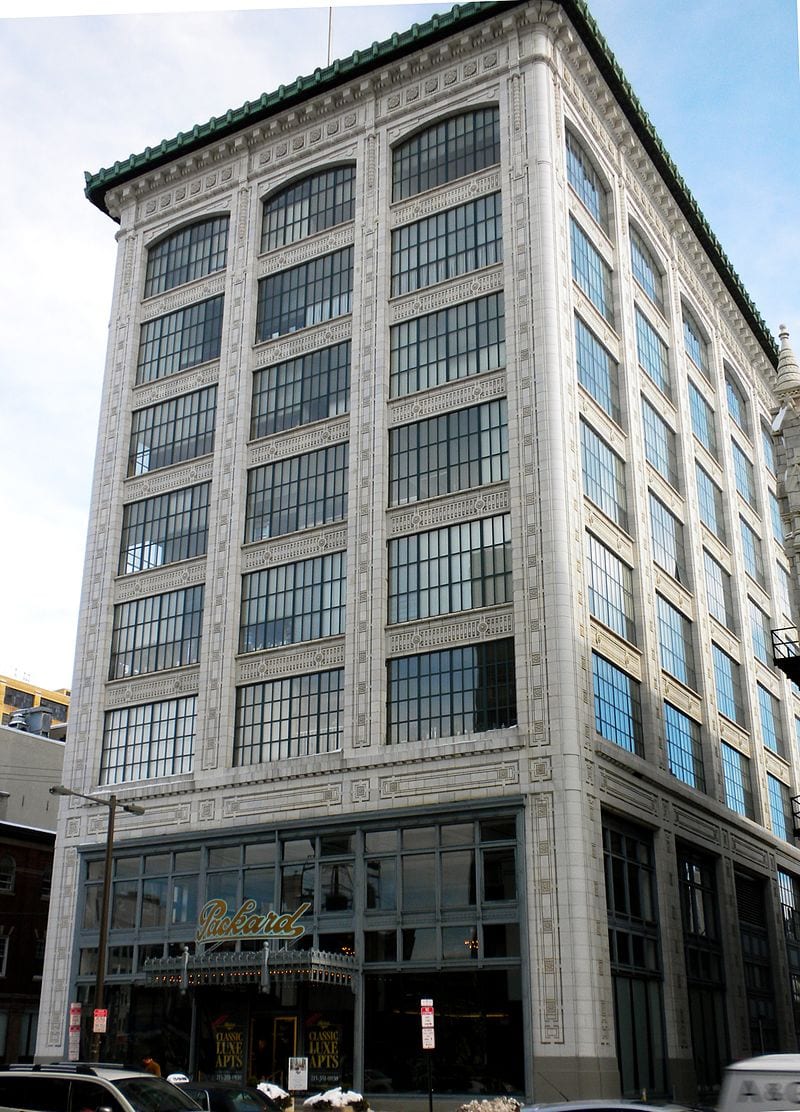 The building is now apartments, however the original Packard logo is still standing proud at the entrance.

I wondered when the car was last driven, as it appeared it had at least been reupholstered. That question was then answered for me by the car’s registration sticker. 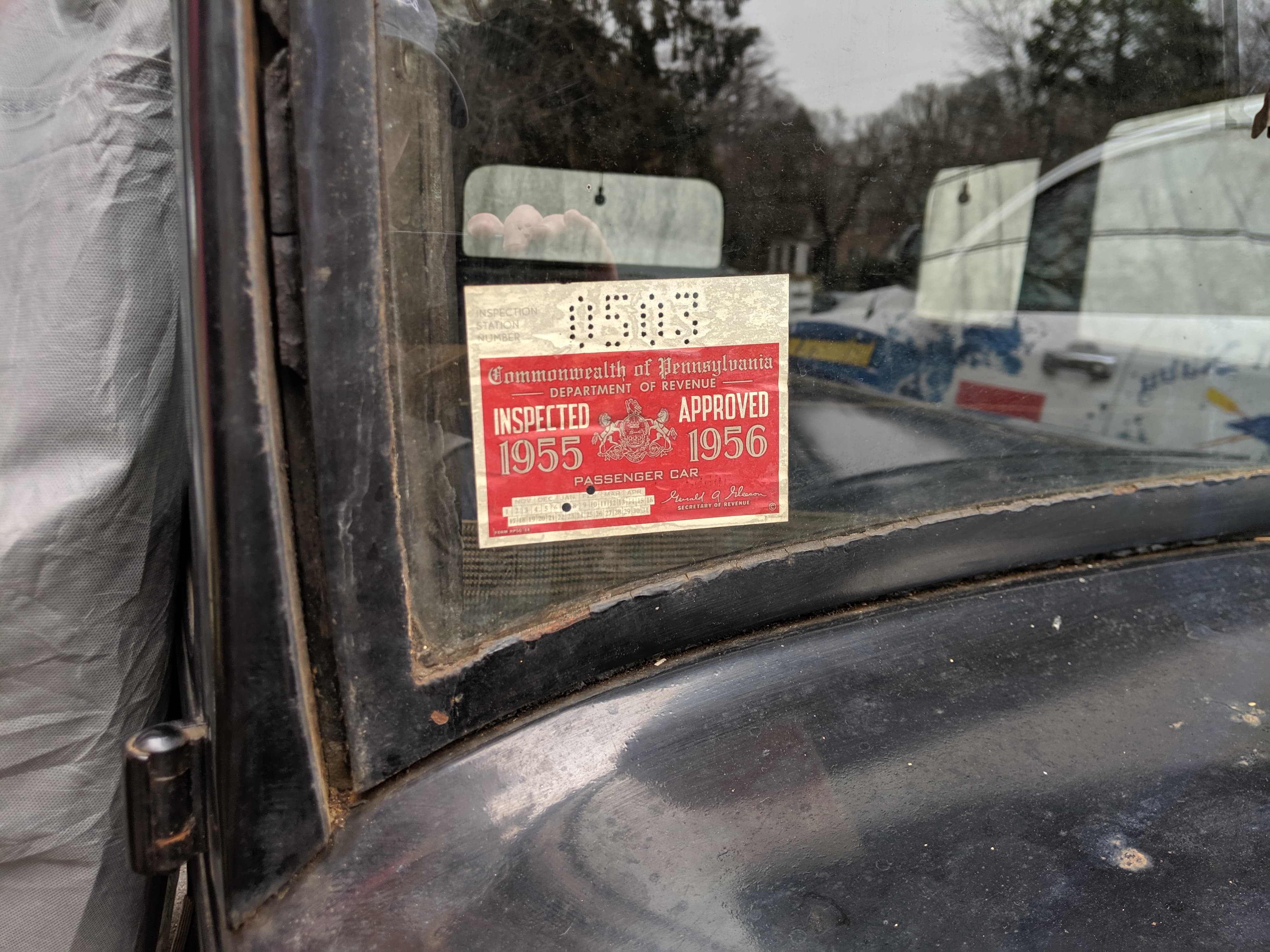 So, what’s going on with it?

I contacted the Simeone Museum in Philly, an absolutely amazing collection of many pre-war and post-war racing cars, and they have yet to get back to me. I’m not sure how interested they would be, but I figured they were the right people to talk to.

After a little more chatting, I took a step back and looked at the car, and then the house. According to the sign out front, which I’ve read before, the residence was built in 1929. I looked back at the 1930 Packard, and then gazed upon both of them together. The house had recently been restored to it’s original state, and I felt like I was in a little time capsule.

Both of these things were brand new in 1930. I can’t properly describe the feeling, but I wondered what that must’ve been like.

I hope I’ll see that Packard back on the road some day.