Some might question the logic of putting out a primer on a game that’s due to be replaced this fall; but in the middle of a global pandemic, things change. I figure if you are like me, and looking back through your gaming collection for a distraction from the horrors of everyday life, Horizon 4 might just do the trick. If you are struggling to make ends meet, down on your virtual luck without enough credits, and only owning a handful of houses (but no castle), I’m here for you! I’ll set about explaining how to engage in Horizon 4 on a weekly basis and start to rank up.

Forza Horizon 4 (FH4) was released in October 2018 and followed up the saga of the “Horizon Festival”. Still a bit more real than the “Fyre Festival”, this is a magical land where donuts are encouraged and there is no speed limit. Set in a rainy, and fictionalized Great Britain, Horizon 4 is a fantastic game. Less “real” than its Motorsport brother, it still renders great looking cars against magnificent backdrops.

Like most automotive games, you collect cars and rank up through a series of events and challenges. FH4 is a bit different though, with its massively open world, you can earn skill points by doing cool shit. The more cool shit you can string together, the more the points multiply, and the higher your “influence” rating. You can’t spend influence, but those skill points can be spent to unlock perks that range from skill point multipliers to cold hard cash, er credits. How that works exactly is a bit confusing at first, so let’s get into how to succeed.

It shouldn’t be too surprising that part of one of the best ways to get started is to get out there and race. Here is a shot of downtown Edinburgh. Each icon represents different types of racing that you can endeavor into. Everything from drag races, to cross country events, to more traditional street circuits. There are even street races marked with colored smoke for checkpoints. The red outlined icons are additional challenges like speed traps, speed zones, drift zones, and danger signs. Each one of those will reward you for doing well and rate you 1-3 stars and tackling them breaks up the monotony of racing a bit. This all adds to your total cash and influence, unlocking more events. When you are just starting out, this is the only real way to level up, so just start entering events. Over time, you’ll find that your garage should be well rounded to cover a variety of events. But in reality, you can enter any normal event in any car. Yes, that makes for some very muddy Bentley’s and Ferraris! 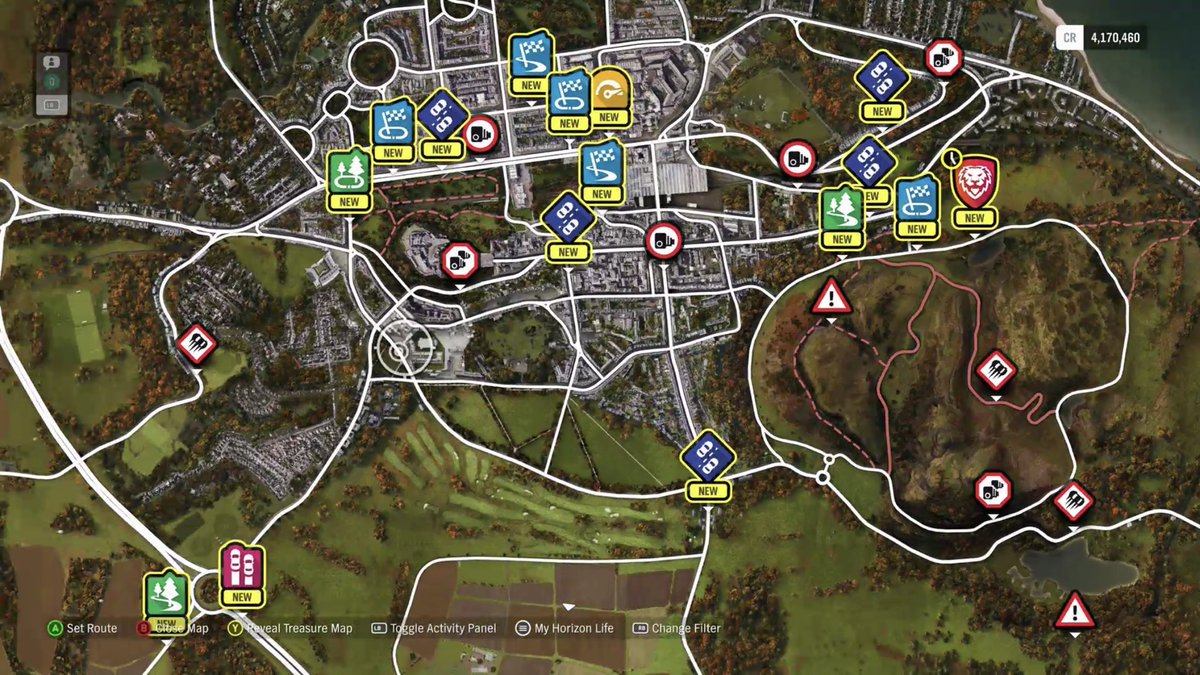 Feeling lucky? Well, once you rank up a bit and have some cash on hand, you can head to the Auction House (accessible via any house or at the main Horizon building marked with an “H”) and give it a shot. Remember those skill perks, you can cash those in for actual credits. Here’s a working example.

First, you need to build up said skill points. This can be done in several ways, but my favorite is by farming skill points. This is totally legal, with no glitches, just fast points, and then fast credits. You can even leverage another user’s custom blueprint map that’s designed for top speed. Take a look at this great YouTube tutorial.  You can find the Blueprint section under the start menu and it’s pretty easy to find races like “Elmsdon on Sea Sprint” that are built by users to make sure you win. The competitors have to follow the predetermined path, you don’t, so you’ll rank up a ton of top speed points as long as you don’t hit anything.   I used the Maserati MC12 Forza Edition which has a high top speed and nets the “ultimate speed” perk for several kilometers in a row.  Make sure you apply some of your skill points to your own car to make sure you max out on skill points. You might as well max out the “drivatars” to “unbeatable” and you can easily get the winning credit percentage to 75% or more, which nets you about 28,000 credits (CR) per race. But it’s the skill points you want/need.

If you’re more of a sideways driver, check out a region called Astmoor.  It’s a little field on the right half of the map (in the square below).  At least in spring and summer, it’s covered in dark green bushes.  Get in a car, any car really, but if you have a skill multiplier on it, even better.  Go there and just drift around smashing bushes.  They keep coming back and it’ll give you a wreckage reward (x6 or more if you keep going) plus the sideways action combo and it’ll just keep going until you stop. I also like the beach over on the east coast of the map, slide around hitting the barriers at the drag race and you’ll get tons of points. 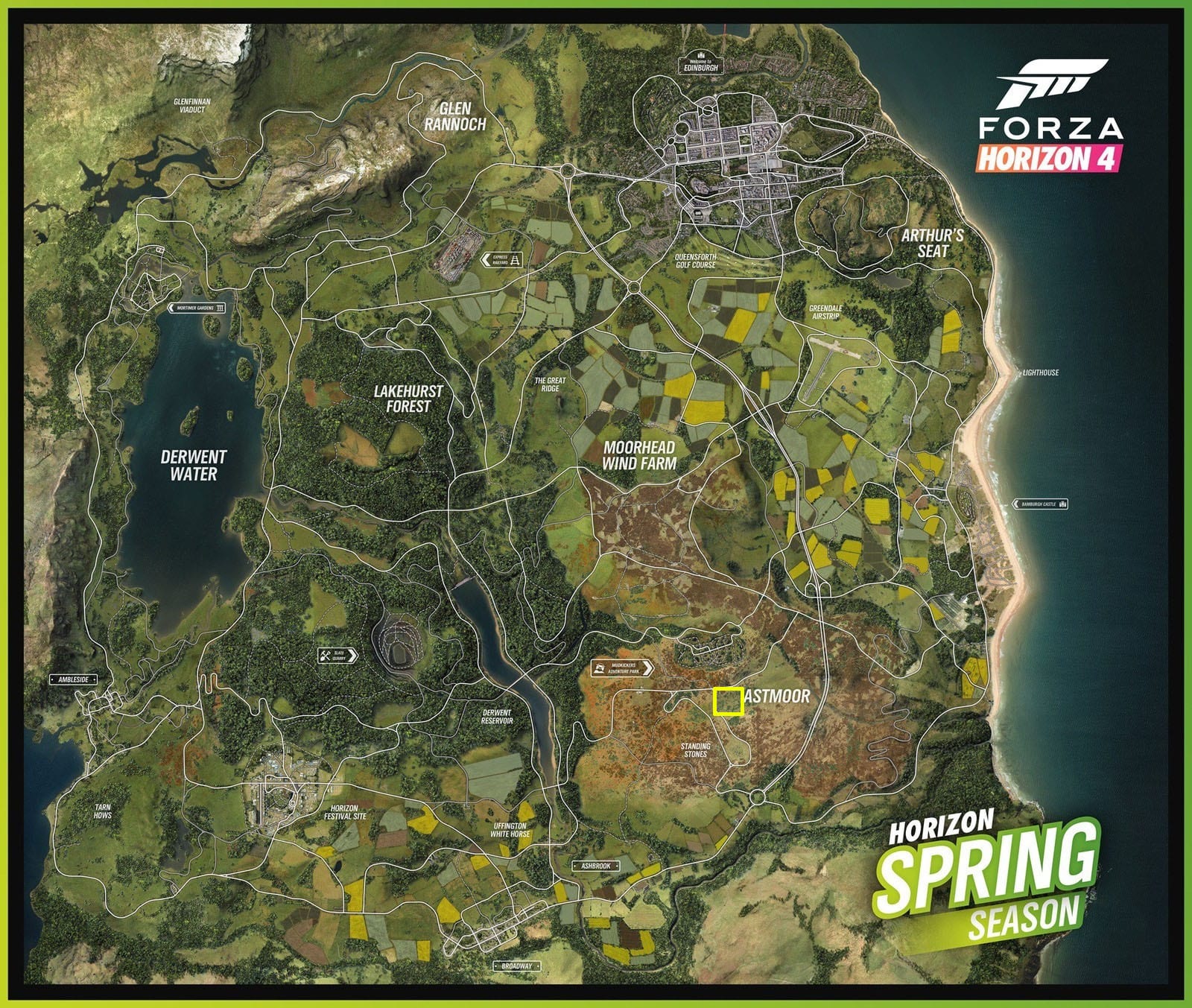 The “Gas tank package” will net you 300,000 CR in exchange for 150K of your own, plus 20 skill points. So you’ve doubled your investment in a matter of minutes. You can do this as many times as you like. Plus, you might as well grab that wheelspin while you’re there.

The Auction House is also a generally fun place to hang out, you can find some amazing deals on the stuff you need to round out your garage. Just be savvy about what things are worth, because some seemingly lame cars are actually rare go for big money, while something that might cost 500K in the dealership is only $30K in the auction house.

If you want to start watching the auctions you can make big money. You’ll have to figure out what’s selling, but I hit a streak of buying the 2014 Huracan LP 610-4 for around 20K-50K CR and then reselling them after some mild modifications for 132K CR! It helps to pop into the tuning shop and add some basics like a front splitter and a big wing. It will bump the car’s rating up slightly and catch some attention. You’ll note that I only went from a rating of 866 to 871, spending about 3000 CR. Toss on a wild paint job too, it can’t hurt and it’ll separate your car from the mix. Plus, it’s fun.

You can graduate from selling measly Lambo’s to the big time once you get some CR on hand. For instance, I bought a couple dozen Aston Martin Vulcans at 700K and resold them for over 900K quite quickly. 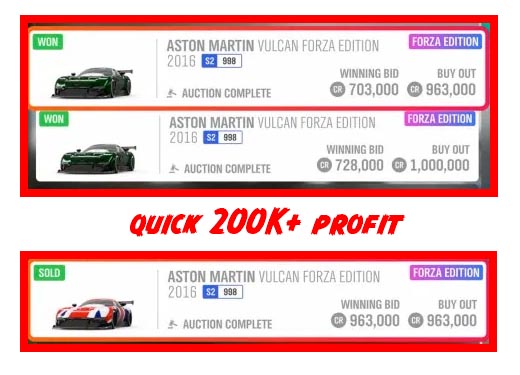 This is where the rubber meets the road, the weekly Forzathon challenges. Pop into the playlist, which is updated every Thursday, and you’ll see a fresh set of races and events to tackle. Honestly, this is the bit that finally hooked me into playing regularly. Each event, which usually aligns with a new literal season (spring, summer, fall, you’ve seen seasons unless you’re Jeff) comes with a base “weekly challenge” which usually requires you to acquire a specific car, or type of car. The one below is any  “modern supercar”. Easy enough, find one in your garage or go buy one and set off to accomplish the (3) tasks. They range from simple accomplishments like getting 3-stars on danger sign to winning a certain number of a specific event type. You’ll get 200 Forzathon Points, which is yet another type of incentive. You can net these via this challenge and the daily challenges and then head into the shop to buy stuff. In there, you’ll find hard to get cars and other stuff.

The rest of the weekly events are more challenging, you’ll have to find them on the map and figure out what type of car you’ll need at what rating.  Many limit car tunes to a round number like 700, 800, etc. and you’ll have to face the “highly skilled” drivatars on a 3-race series to see who gets the most points. It’s a great way to find new cars that you might not have come across and rank up. You’ll get spot bonuses like a new car reward for hitting 50% and 80% complete on the weekly challenge. But beware, “The Trial” is one of the weekly events and is represented with a lion’s head on the map. You’ll have to race with real Forzathoners from around the world on a team against “Unbeatable” drivatars. It’s f’ing hard sometimes depending on the track and the car restrictions. But it’s fun to play with real people, except when they miss a checkpoint.

That’s it for now, I’m over 1500 words and I could keep going. I haven’t even touched tuning, modifying your character, bonus boards, or the LEGO Speed Champions area! Perhaps I’ll make this into a series if folks are interested. Toss in your questions in the comments, happy to chat more about Horizon 4! 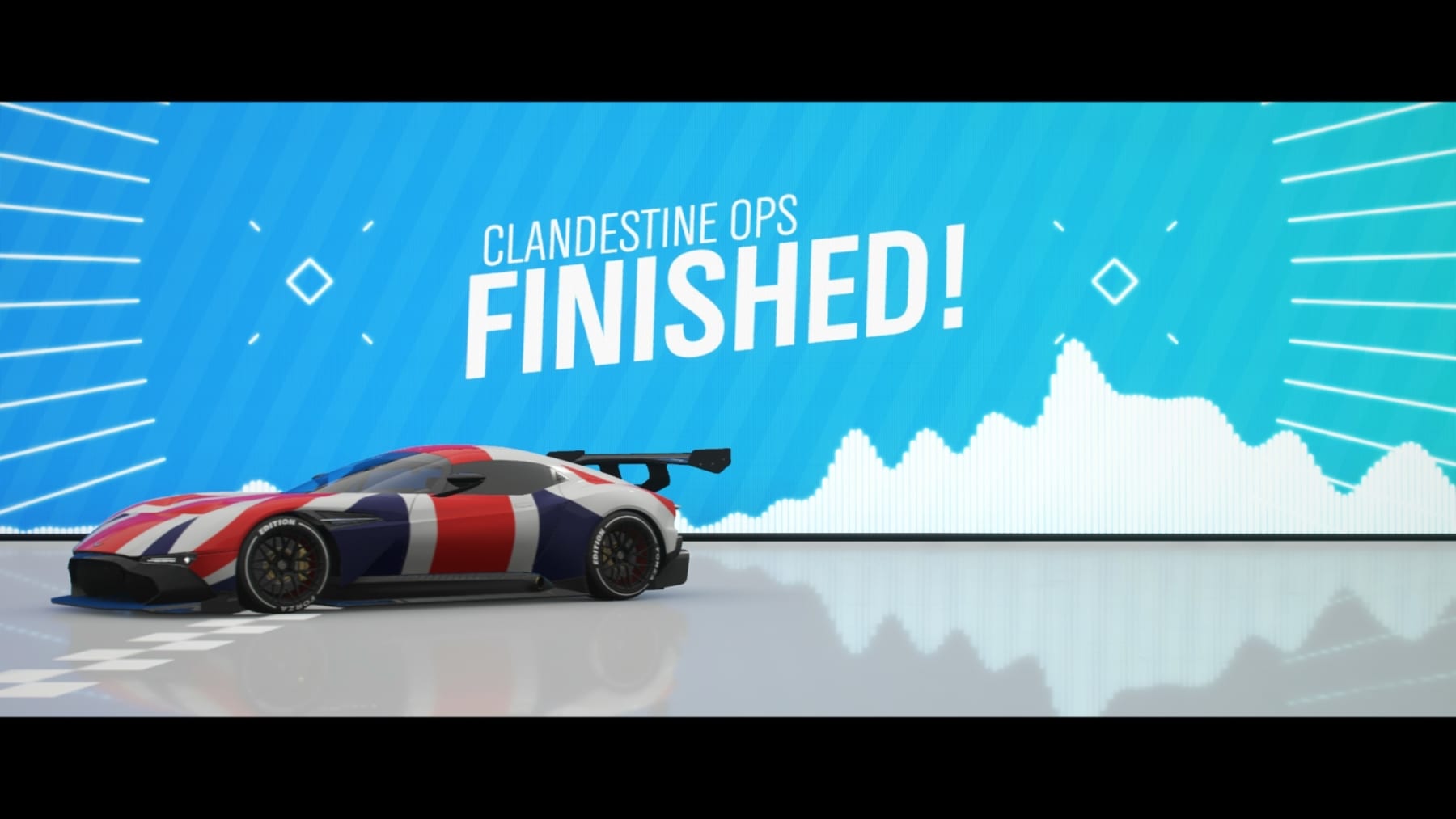