Ford recently announced that if you felt like getting a sketchy 1920’s type disease, you could fill the front storage area of your Mach-E electric crossover with wings, or shrimp. If you don’t believe me, here are the pictures: 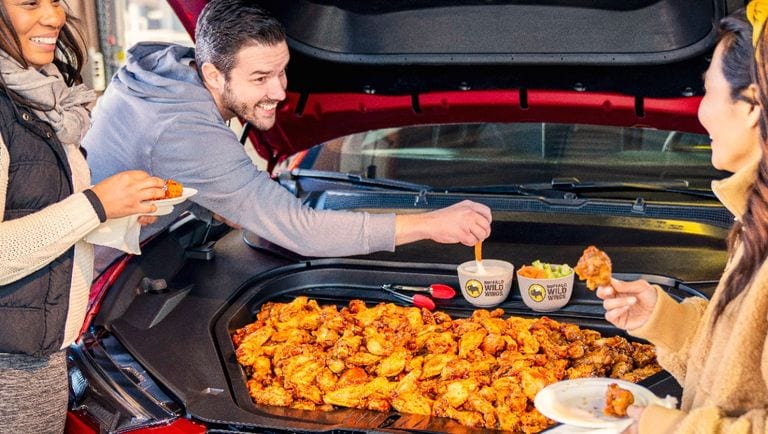 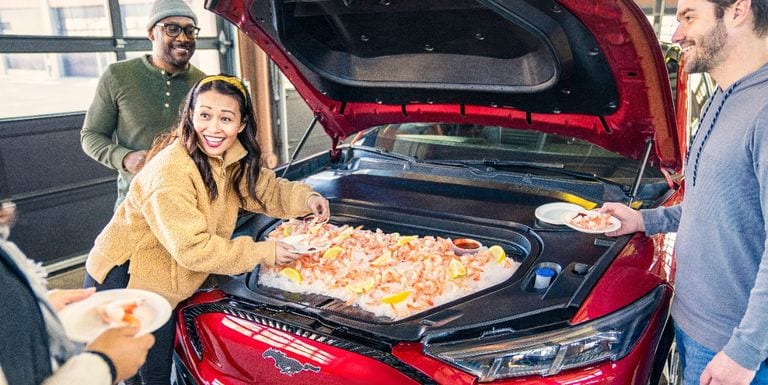 Although I’m aware chicken and shellfish may be the only initial offerings, I’ve sat down and thought long and hard about alternatives. The first is clam chowder. 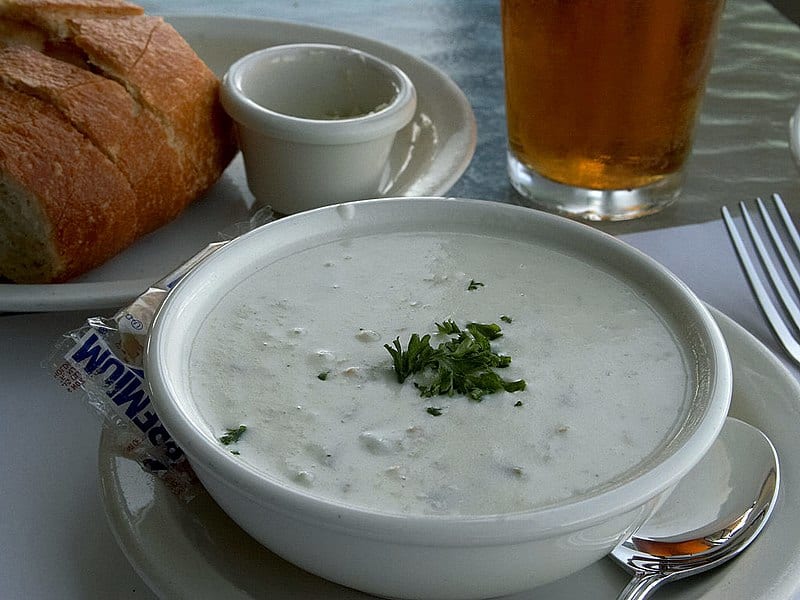 Everybody likes clam chowder right? Rich people, poor people–people of all races, creeds, genders and ethnicities. Well, actually I’m sort of just guessing at that. Doesn’t matter, though. What does matter is how much chowder it would take to fill this frunk.

The Mach-E’s frunk is 4.8 cubic feet in volume. The great part about soup like clam chowder is none of this space will be wasted. Wings or shrimp would be a lot of air–I want to maximize the calories and nutrition.

4.8 cubic feet is about 4,596 ounces. The cans of soup I’m looking at right now–I’m looking at a lot of soup–are 19 ounces each. If we round up, that’s 242 cans of soup. The particular flavor of Campbell’s I’m looking at is also the chunky variety if you feel that’s important. These cans are $1.79 a piece at my local supermarket, meaning it would cost $433.18 to completely fill the frunk. Also, if you wanted to serve everybody, you would need some spoons. We can’t just slurp out of the frunk. That would, after all, be unsanitary.

Actually, you could just open the drain plug at the bottom of the frunk one at a time–taking turns sharing the chowder under the car. Forget about the spoons–I’m sorry.

There’s two servings per can, meaning you could theoretically feed 484 people out of the frunk. That’s actually very impressive. On a two-thousand calorie diet, if you ate every meal from the nourishing frunk of the Mach-E, you could still feed 44 people.

That still sounds a little expensive, though. I’m also not in the mood for soup, really. What about dessert? 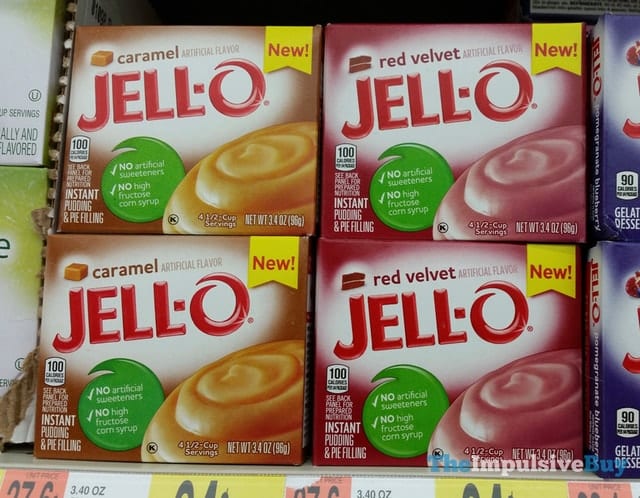 We’re trying to save money here, right? We’re not gonna buy the little cups and dump them all in individually. That defeats the purpose of the frunk. We’re gonna get the mix and find some milk.

Alright, it’s three cups of milk per five ounces of this mix. The mix is $1.39 per box, and it would take 36 gallons of milk. Let’s do a quick google search to see the price of milk.

Alright, we’re gonna go with 2% because whole milk is disgusting and 1% tastes like skim milk that has something to prove. Two-percent is four bucks a gallon. If you’re lactose intolerant, I’m sorry, you can’t do this.

Thirty-six multiplied by four… that’s $144 dollars for the milk. The total for the pudding mix is $262.71. That brings our grand total for pudding (I chose chocolate, I like chocolate) up to $406.71. Wow, okay. So if we choose pudding that’s $26.47 in savings. I’m not sure how you could get the milk hot though. Maybe some charcoal and a big 40 gallon drum. You would need a few friends to help you pour it in probably.

I’m in college–how stupid can I be? Lets tie this into three courses with some ramen. 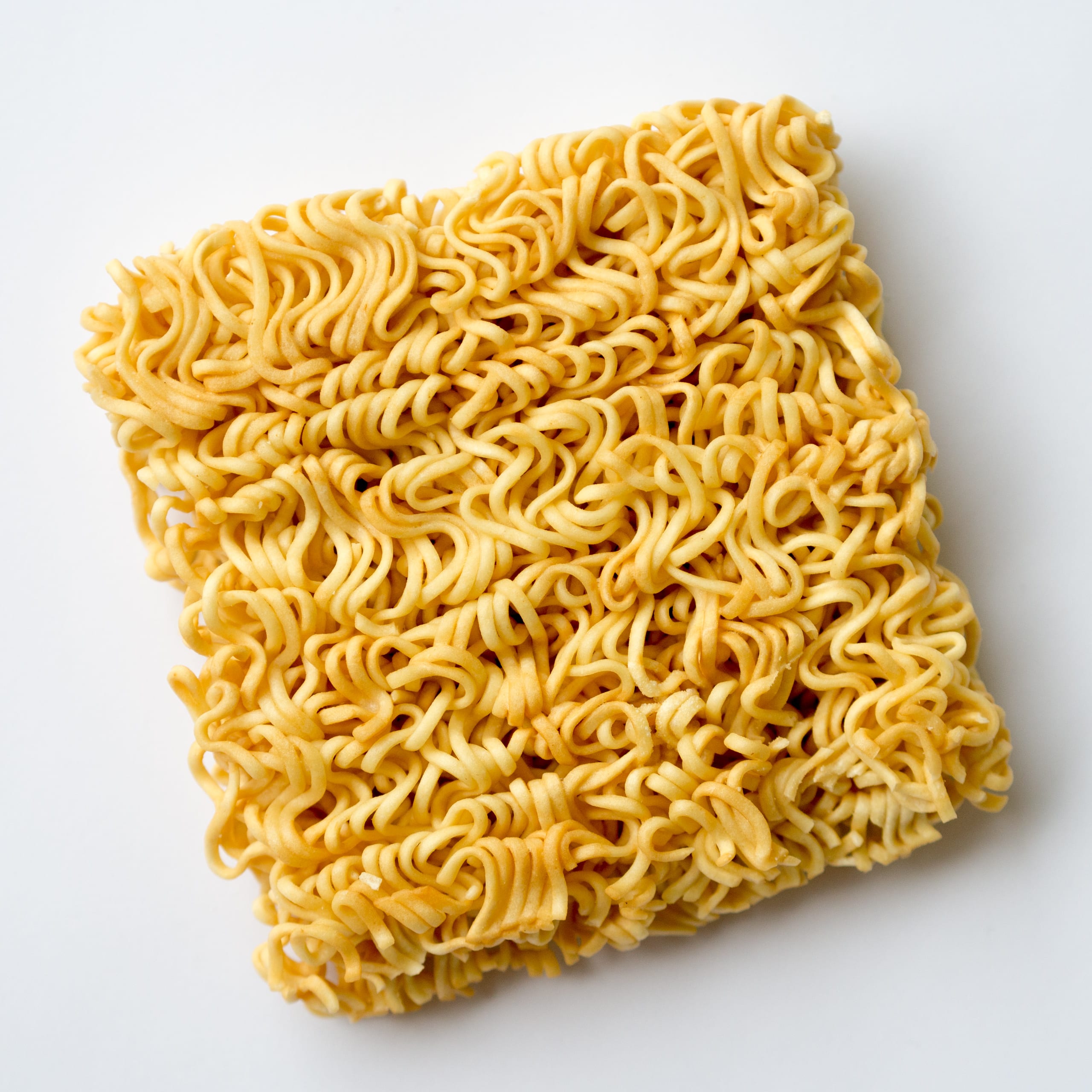 Ramen bricks are about four inches square and an inch deep. This makes their volume about nine ounces. Theoretically, we could fit 510 bricks into the frunk. I’m sure a little crushing would be necessary, though. As far as the hot water goes, I think the drum method would be carried over for this meal as well.

The cost of these noodles? You would need eleven bulk packages of 48 units per piece. The bulk boxes cost $9.97, so the total would be an absolutely paltry $109.67. I’m really surprised by that. Neither the pudding or the chowder is even close. There is a catch however–the drain plug method no longer works here. We need forks.

If everybody got their own brick, we would need 510 forks. 500 forks in only $11.89, so I guess a few people would have to share. I also got the more expensive heavy-duty forks–you could save more getting a cheaper variety.

So there it is; the cheapest meal to be had in the Mach-E’s frunk is ramen–by a huge margin. Unless someone can do better than $121.67, I’ve figured it out. Forget the shrimp. The shrimp is old news.