Finnish Line: Extracting the full potential of the Talbot Tagora

It’s safe to say I’m a big fan of the Talbot Tagora. I don’t know what it is about the Tagora that really appeals to me: either it’s the super-brutalist, slab-sided design, its troubled birth in the hands of Chrysler Europe and Peugeot-Citroën, or the fact the SX variant was the fastest French production sedan at the time, thanks to having the sole PRV V6 derivative with triple Webers instead of two.

Nevertheless, the Tagora was a huge failure, which might be one of the reasons why I like it so much. There are also no Tagoras where I live, as Finnish Talbot production was limited to only the Horizon and Solara family cars and the executive Tagora was left out.

Considering the Tagora’s niche appeal, there are a couple different ways to approach the car today.

First of all, no normal person knows of the Tagora. Not many were sold, the design isn’t easy on the eyes and survivors are rare. As a result, they only seem to exist at car shows somewhere in France or in complete beater condition on Leboncoin, the French Craigslist. A mint condition V6 with well-tuned Webers runs you closer to 10k than 5k these days, and you’d still spend forever and eternity looking for NOS parts for the car to keep it looking the way it does in original brochure shots.

The second approach is far more daring, and a back story needs to be provided for it.

Despite the resurrected Talbot brand not being a huge success in the early ‘80s, the company was still eager enough to have a racing program. Subsequently, Danielson, a Talbot garage was entrusted with extracting more power from the 2.2 Douvrin four-cylinder that was relatively common in French saloons at the time, including the Citroën CX and the Peugeot 505, which also donated much of its mechanicals to the Tagora when PSA re-engineered the Chrysler Europe “Project C9” to be produceable after the takeover. Danielson created a better flowing custom head for the 2.2 Douvrin, with a hotter cam and larger valves as part of the package. 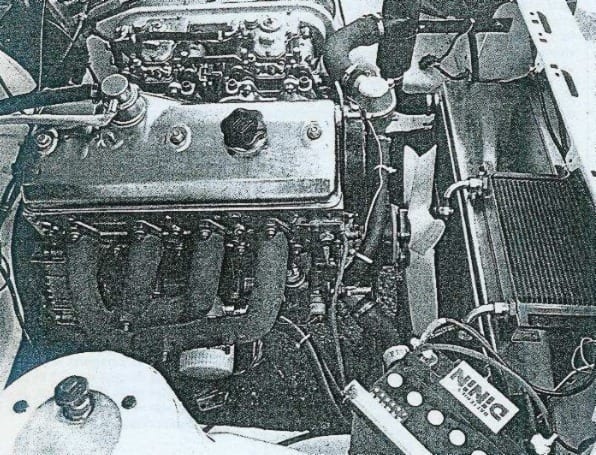 Danielson’s efforts resulted in 210 horsepower, which is almost 100hp more than either the Tagora GLS’s 2.2 Simca or the 2.2 Douvrin unit produced stock; some sources say it was the Simca 2.2 that received the tuning, but these are different engines. Compare that to the positively lightweight 920kg end result of the Tagora’s racing preparations, and in the hands of Jean-Pierre Beltoise, the Dinin-Michelin-Total sponsored, red-orange-yellow Tagora Superproduction should have been a wild success.

It was not. The 1982 season resulted in no finishes for the Tagora, which probably didn’t further Talbot’s market exposure in the way the company intended. For 1983, the hot four-cylinder was plucked out, and replaced with a Danielson-tuned PRV that produced a whopping 275 horsepower, again a hundred horses stronger than the stock V6, with the 1983 car weighing in at just a tonne.

Despite that, it took until October 1984 for the Tagora to actually win a race, at Monthlery. And even so, a false start caused the actual final standings to place it at a lowly sixth, despite Jean-Claude Lompech’s best efforts. The last race for the Tagora Superproduction was at Magny-Cours in 1985, which saw it finish 13th.

This brings us to the final idea. Don’t go chasing a mint condition SX V6. Instead, take the best base Tagora you can find anywhere in France, the cheapest one or the only one. Your mileage may vary. Strip it, weld it, slam it to the ground to emulate the ambitious stance of the original racer. Put in a roll cage.

Lose the engine, which probably won’t run at the moment anyway. Replace it with a serviceable PRV V6 from a Volvo 760 (Some people would interject here, asking why you wouldn’t start with a non-rusty and more common Volvo 760 to begin with. Don’t). Reproduction Weber carbs can be sourced for the Volvo PRV, ones that are probably less porous than the Tagora originals.

Respray the end result in correct enough Batteries DININ colors, and depending from availability, get vintage barrel wheels for it or just run banded steelies. The bolt pattern is 4×140, meaning that some old Subaru wheels will fit as well as Peugeot 505 ones. The Tagora’s hilariously narrow 505 rear axle will come to your rescue here, as the stock car has its rear wheels tucked way inboard for cost saving reasons, but this only means you can fit fatter rubber there without having to bolt on fender flares. When the dust settles, you should have a 2200-lb superproduction replica saloon with close enough to 200hp and a brilliant V6 sound. No-one will know what the hell it is you have built, but it’ll be great anyway.

As for me, I’ll come back to these caffeinated fever dream notes when I have the budget ready. For the time being, I’ll be watching those Tagora V6 clips on YouTube.