It was a vacation at the tail end of chaos. The preceding weeks involved major life changes topped with major life changes. The timing was perfect. A summer weekend away in south Florida. A reprieve from reality. The trip snuck up on me. I packed a backpack and boarded a plane. 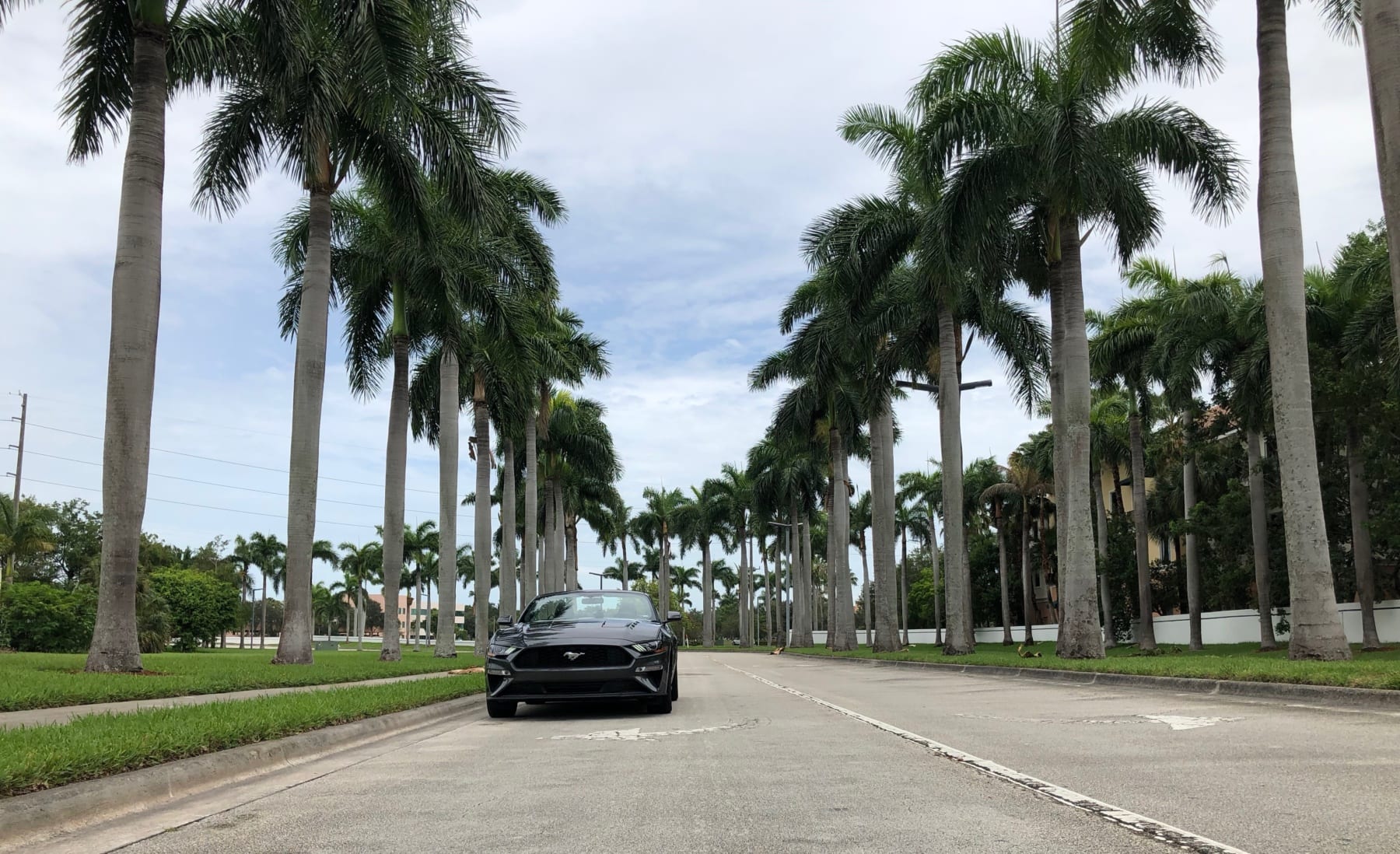 A few short hours later I was driving a rented Mustang convertible down one of the most beautiful stretches of road I had ever laid eyes on.

The weekend away with my wife was to serve as a few days of fun as much as it was to decipher we like Florida as much in the summer as we do in the winter. PBI’s Enterprise hub was my first stop after disembarking a relatively easy JetBlue flight. After driving a Mustang GT in California it only seemed appropriate to have a similar chariot in the Sunshine State. Before leaving the rental lot I had already dropped the roof, turned up the cooled seats, and began streaming a podcast via Bluetooth. This might not be the picture of a normal vacation, but this was exactly the kind of vacation I was craving. Coffee stop completed, I pointed east.

The jaunt from the PBI vicinity to the east-most road in this area of Florida was deceptively quick. Before realizing it a T-intersection was ahead and the only options were north or south. Needing to end up near Miami, I turned right. A straightaway lay ahead and I squeezed the throttle. The Mustang’s turbo motor spooled and pushed the roofless silhouette through a strip covered by flora. And then I sat in construction traffic for ten minutes. Luckily it quickly opened up after that and I was in for a treat. 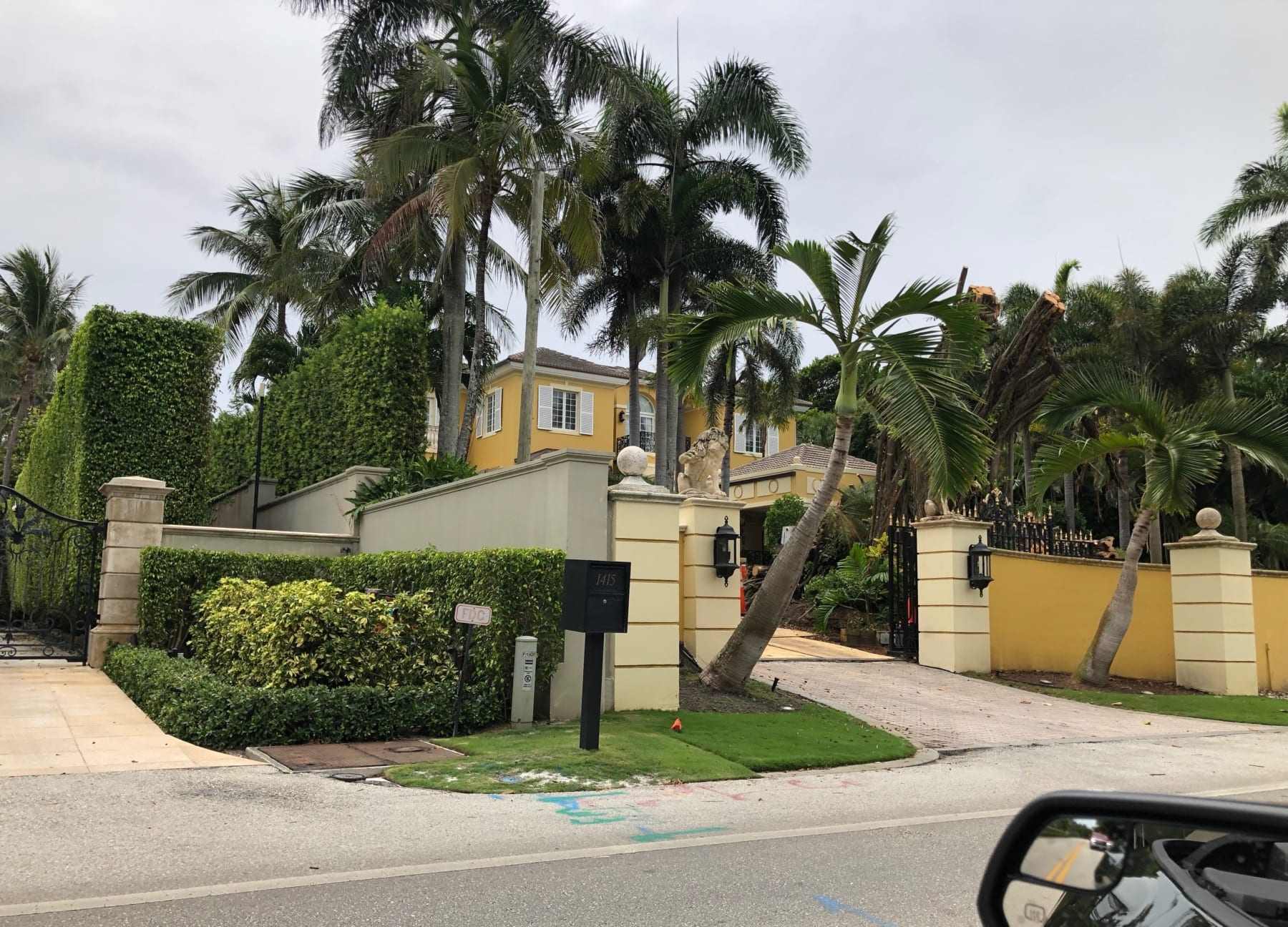 It didn’t take long to realize that Florida State Road A1A is simply stunning. Entering the road via causeway near West Palm Beach, it’s fully immersive Florida. Palm trees. Houses like those you see in your favorite shows. Cars more expensive than many houses where you come from. Birds and lizards that wouldn’t be out of place in Jurassic Park. Then you round a corner and it gets even better. 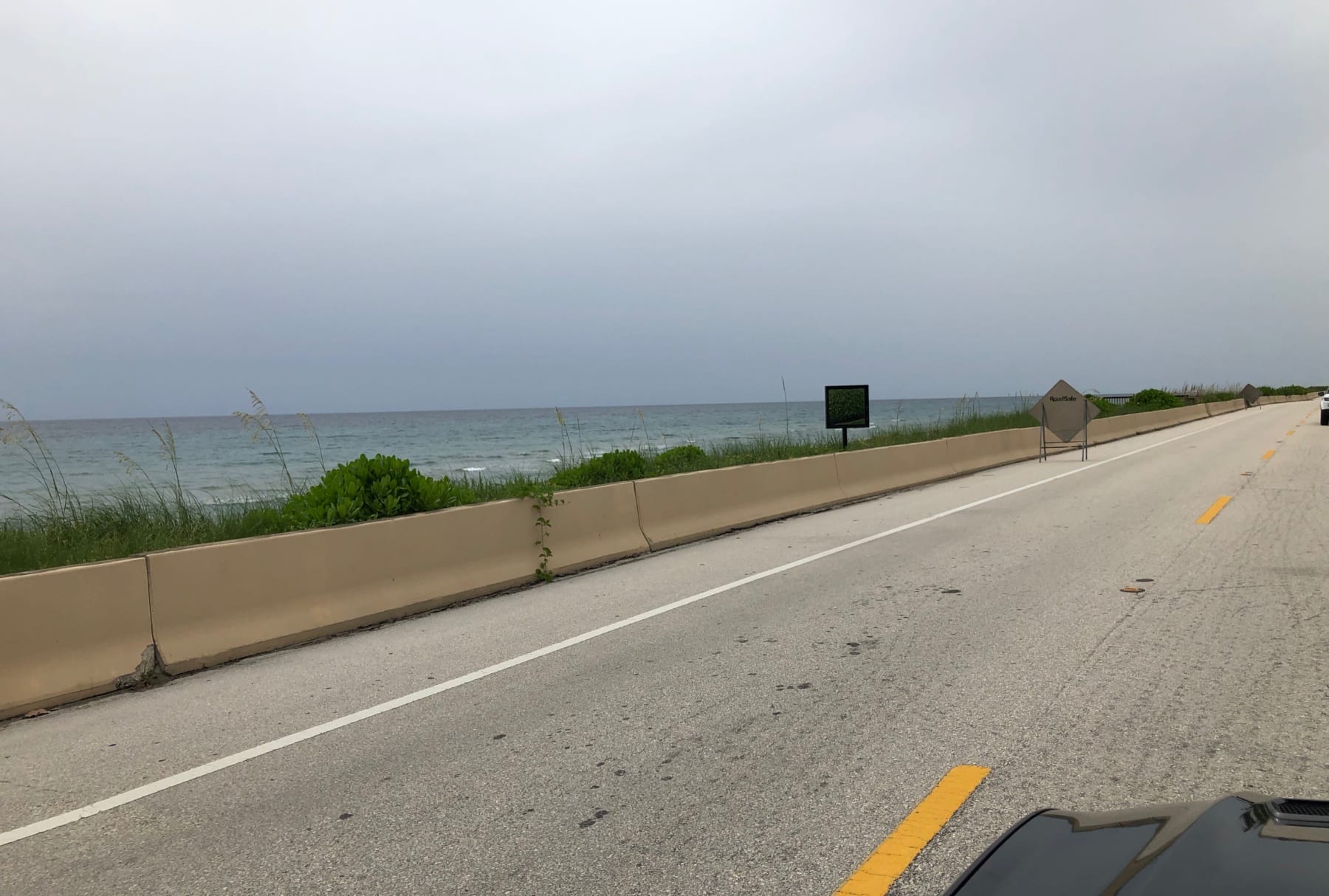 Driving south the passenger side gets views of homes “like those in the movies.” The driver side is treated to an even better sight: the ocean immediately on the other side of the retaining wall. My jaw dropped. I couldn’t believe what I was seeing. Hurricanes and alligators be damned; this part of Florida was incredible.

I cruised the length of the A1A to the point at which a road closure rerouted me to the highway. I wasn’t mad; the nonstop breathtaking views and overabundance of drivers failing to use their turn signals was exhausting. Plus, I had been going sub-35 MPH for an hour already. I was ready to stretch the Mustang’s legs. 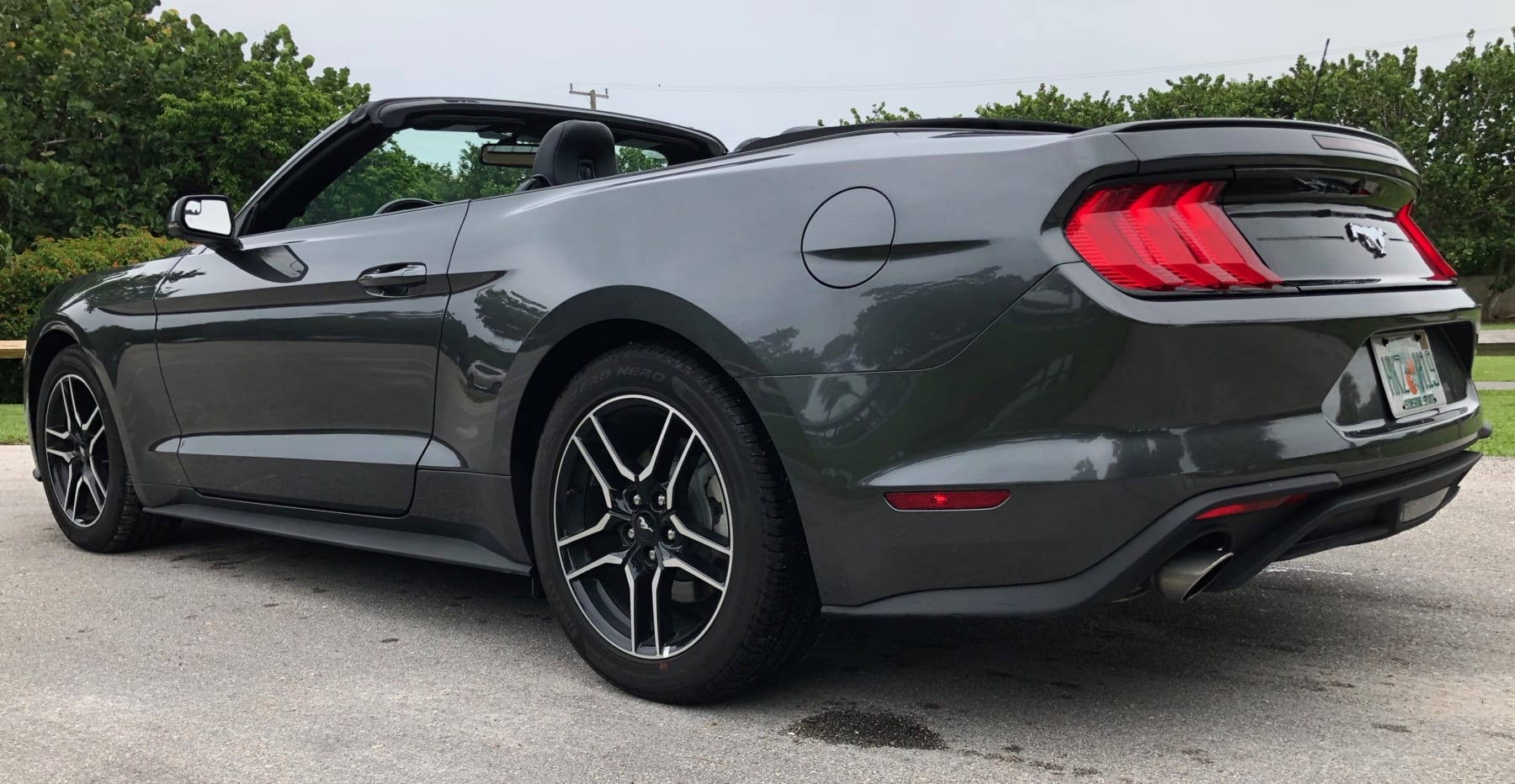 My experience with the 5.0 left me very pleased with Ford’s current pony-car. The auto trans left much to be desired but the Coyote shines so bright the 10-speed was almost irrelevant. But this was my first experience with the EcoBoost motor in the ‘Stang. As I reached the highway entrance I did what any sane automotive enthusiast would do: I put in Sport+ mode, tugged the left paddle to drop down into 2nd gear, pointed the nose to the horizon, and floored it.

Acceleration was actually pleasantly surprising. Not for the power delivery, but for the sound. Hearing a turbo whoosh and blow-off valve while driving a car with the Mustang logo on the steering wheel was more than amusing. Cruising speed happened sufficiently quickly and without drama. The engine is fine, if not slightly underwhelming, but the “this isn’t supposed to come from here” noise-association is hysterical. Over the course of the weekend I found myself repeatedly accelerating just hard enough to hear the turbo noises. Then I’d look at the hood, look at the logo on the steering wheel, and laugh. 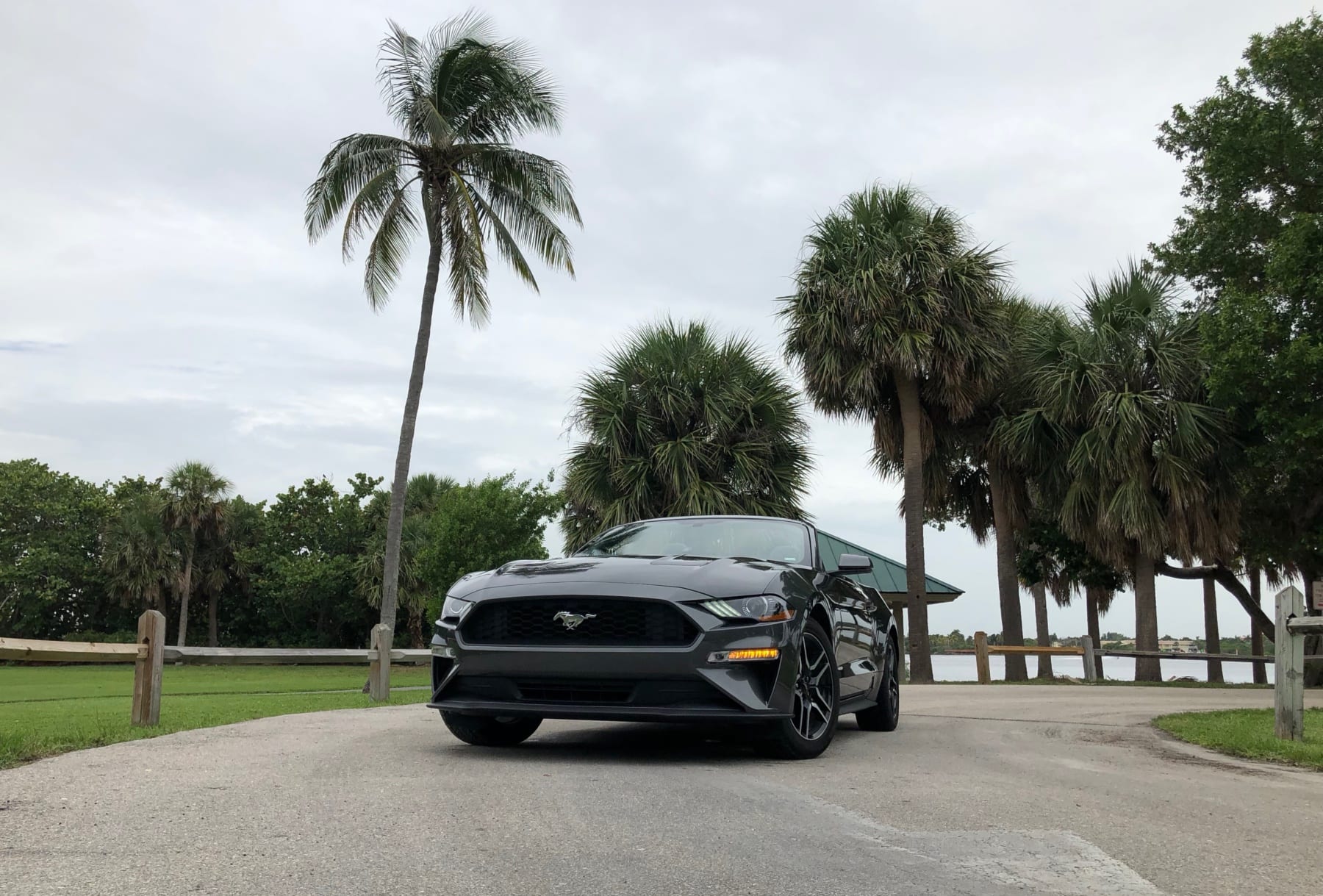 So the motor might be fine “for what it is” but the transmission still sucks. The 10-speed simply has too many gears for its own good. Whereas in the 5.0-powered Mustang has enough torque to pull through a gear when the trans gets confused, the four-cylinder car doesn’t. The consequence is the transmission stumbling and tripping over itself in an attempt to maximize fuel efficiency. Turbo lag plus finding yourself four gears too high makes for a bad time. And while upshifts happen properly quickly under hard acceleration but downshifts are nearly unacceptably bad. 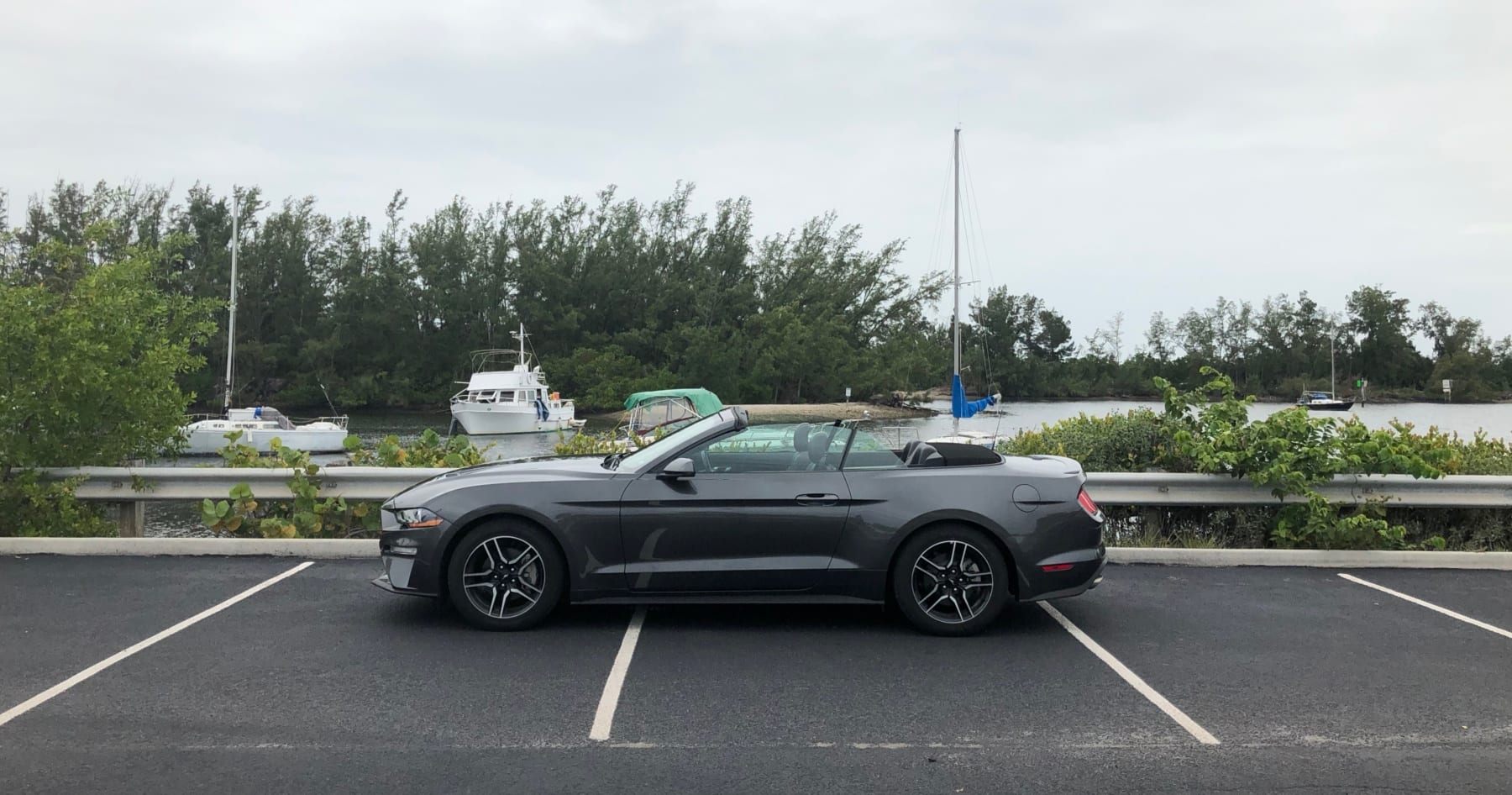 Yes, this was a rental; yes, it more likely than not had been beaten on prior to my time with it. But the transmission in the V8 car acted similarly. More than once the car downshifted into first coming to a light, bucking and rocking as if somebody new to driving manual transmission was trying to figure out what to do with the extra pedal and lever in their hand. But it wasn’t that; it was just the awful 10-speed trying to figure out what the hell to do with itself. 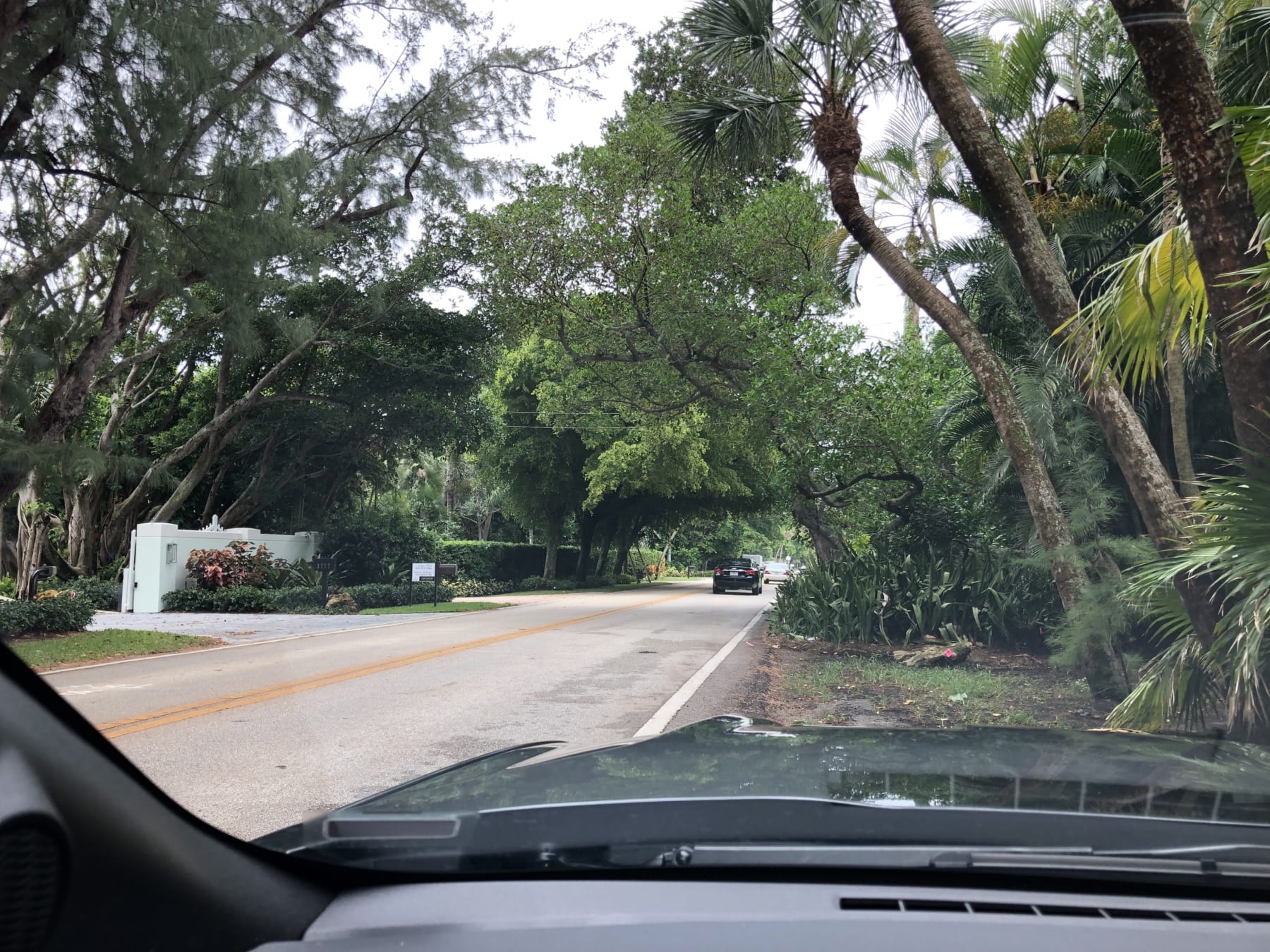 At least the extra gears make for good fuel economy. I did my whole trip from PBI to Miami via the A1A, to Coral Gables, back up to Miami Beach, back up to PBI and with a good 50 extra miles of exploration mixed in for good measure, all on half a tank of gas.

Handling was fine especially given the limits I didn’t push. The furthest I explored the car’s grip was going into a 90-degree right-hand turn that could be taken at ~35 MPH…at 20 MPH. The joke is that Florida roads are flat and straight. It’s true. But out on the highway or on more local roads the Mustang is a pleasure to drive. Almost laughably so. It doesn’t care what you do; in normal conditions it’s a normal car. 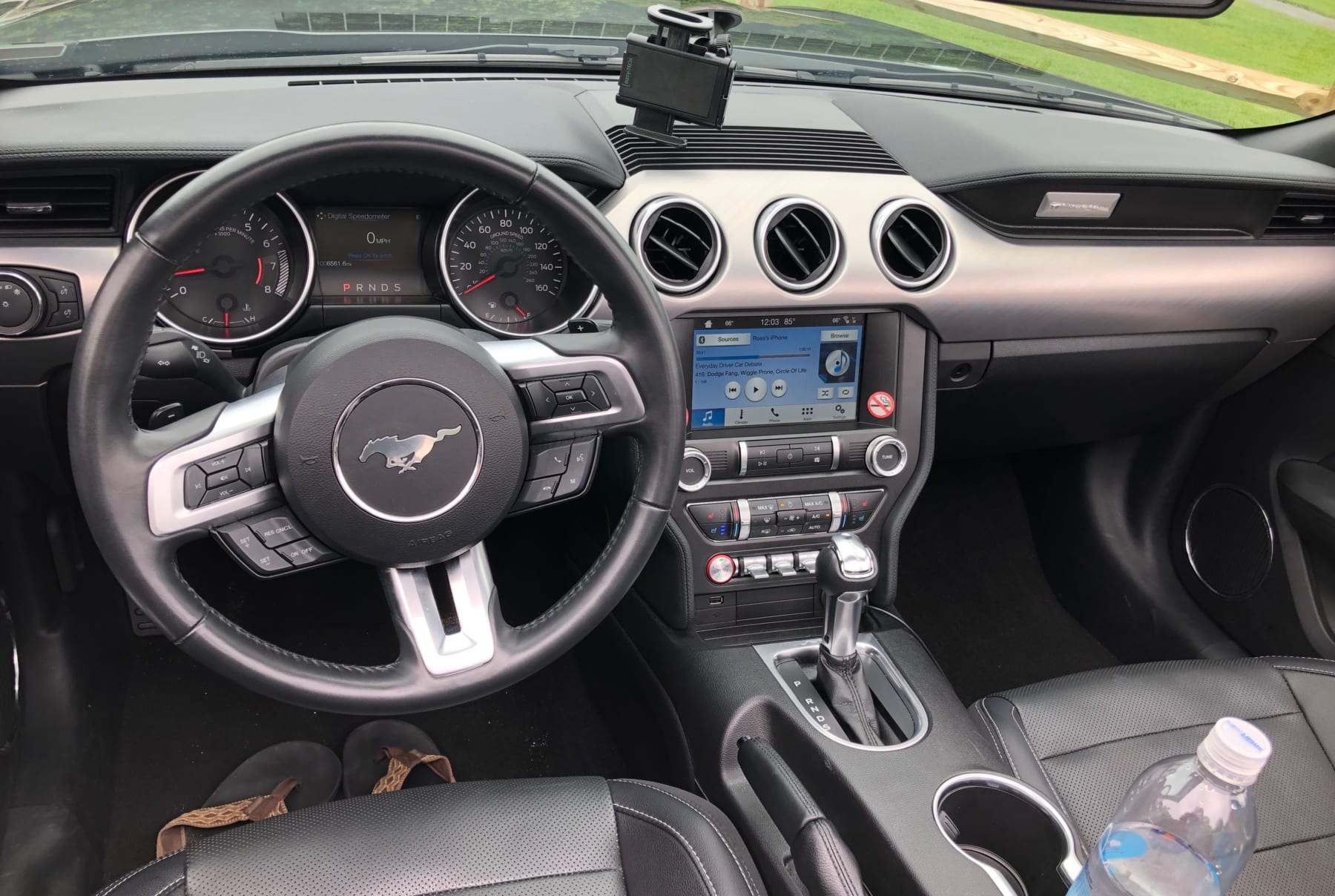 The sixth generation Mustang is the sweet spot for its class. Whereas the Camaro is cramped and compromised the ‘Stang is totally livable. And though the Chevy is the athlete of the crew, the Ford is still closer to the former in performance and driving dynamics than it is the big Dodge. Ford achieved greatness here. The Mustang might not have the handling capabilities or steering feel of the Camaro. It might not have the long-haul comfort and presence of the Challenger. But it’s sufficiently good at what both competitors are great at. And for that, it’s a hell of an achievement. 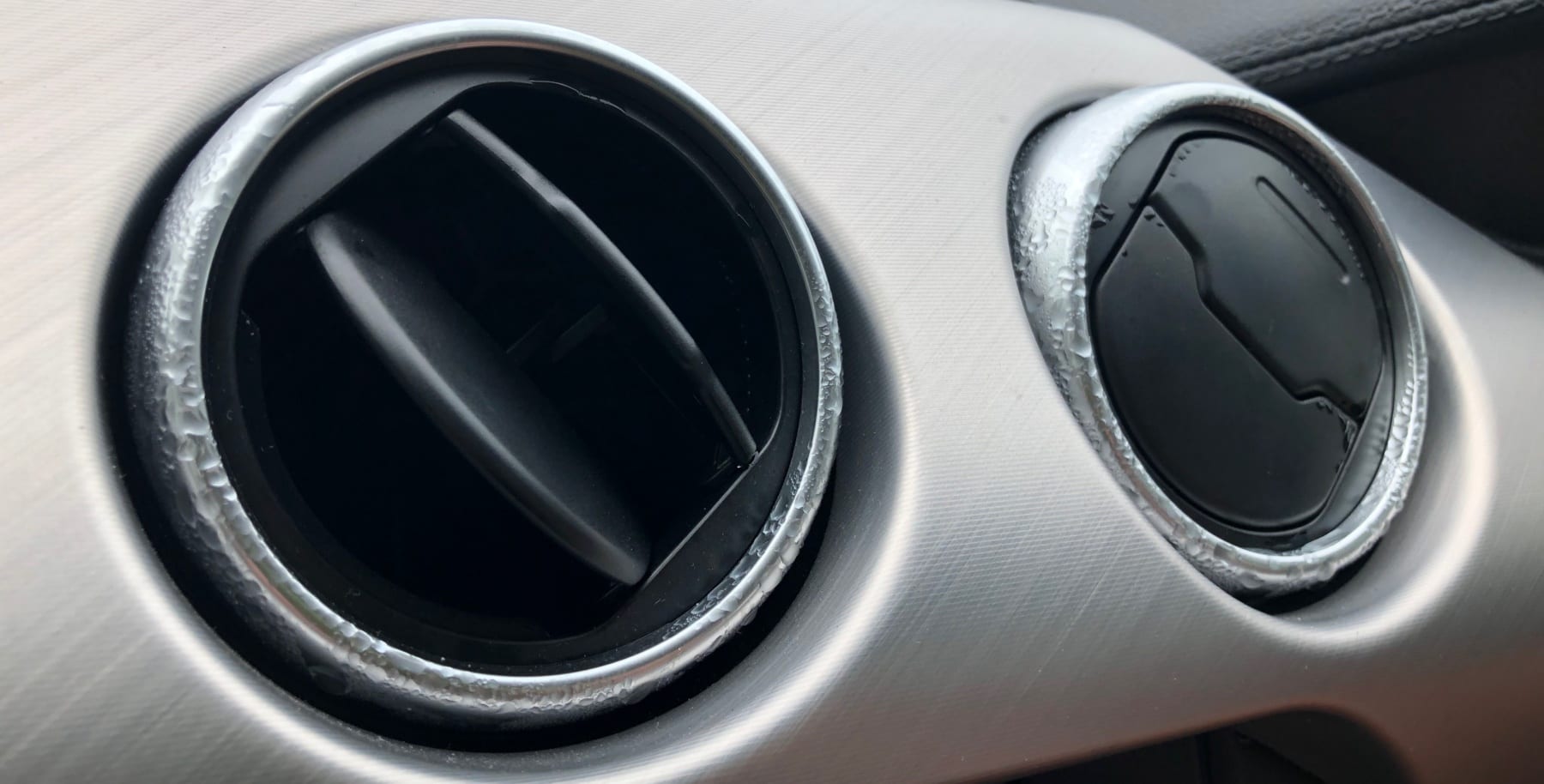 What shocked me most about my time with the Mustang is how livable a modern convertible is even in Florida in the dead of summer. The A/C kept us cold even on a sunny day in 98-degree heat. Cooled seats help. But it’s not just the strength of the HVAC system. We’re at the point now that a convertible roof isn’t a full-fledged compromise in how it insulates the occupants. The Mustang’s roof doesn’t seem to catastrophically ruin the car’s on-road driving feel and there’s virtually no cowl shake from the top when closed or even when open. The car doesn’t feel “floppy” like convertibles used to. With the roof up, it just feels like a car. 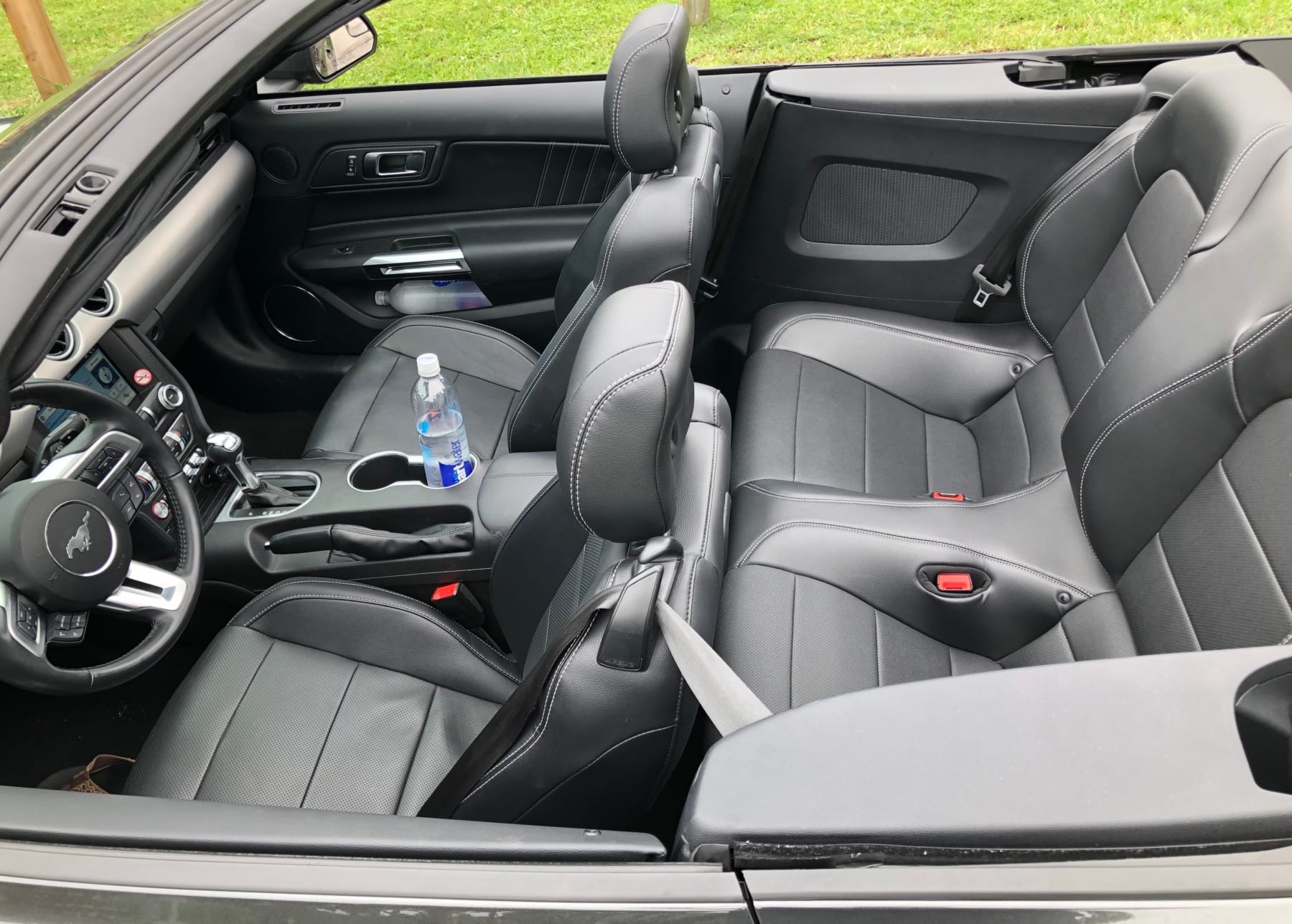 Shortly after starting my trip to Miami, I texted my wife: “Well, convertibles are officially amazing.” I meant it. Even in a rented, “small-motor” Mustang convertible, having the roof down enhanced every aspect of my drive from the West Palm Beach airport to Miami and back, and everywhere in-between. I thought and knew I would like convertibles. This confirmed just that. I’m hooked.

Being able to drop the roof is a game-changer. The sky is yours to stare at, anytime and anywhere. Even when it’s raining a bit you can stay dry given your speed stays up. And going places, going anywhere, feels like an event. In a convertible, a drive is a story waiting to happen. It’s never boring, never dull, never an experience like that in a car with a fixed permanent roof. If motorcycles hadn’t been invented, would-be riders would flock to convertibles. In a convertible, you live the feeling of where you’re driving. 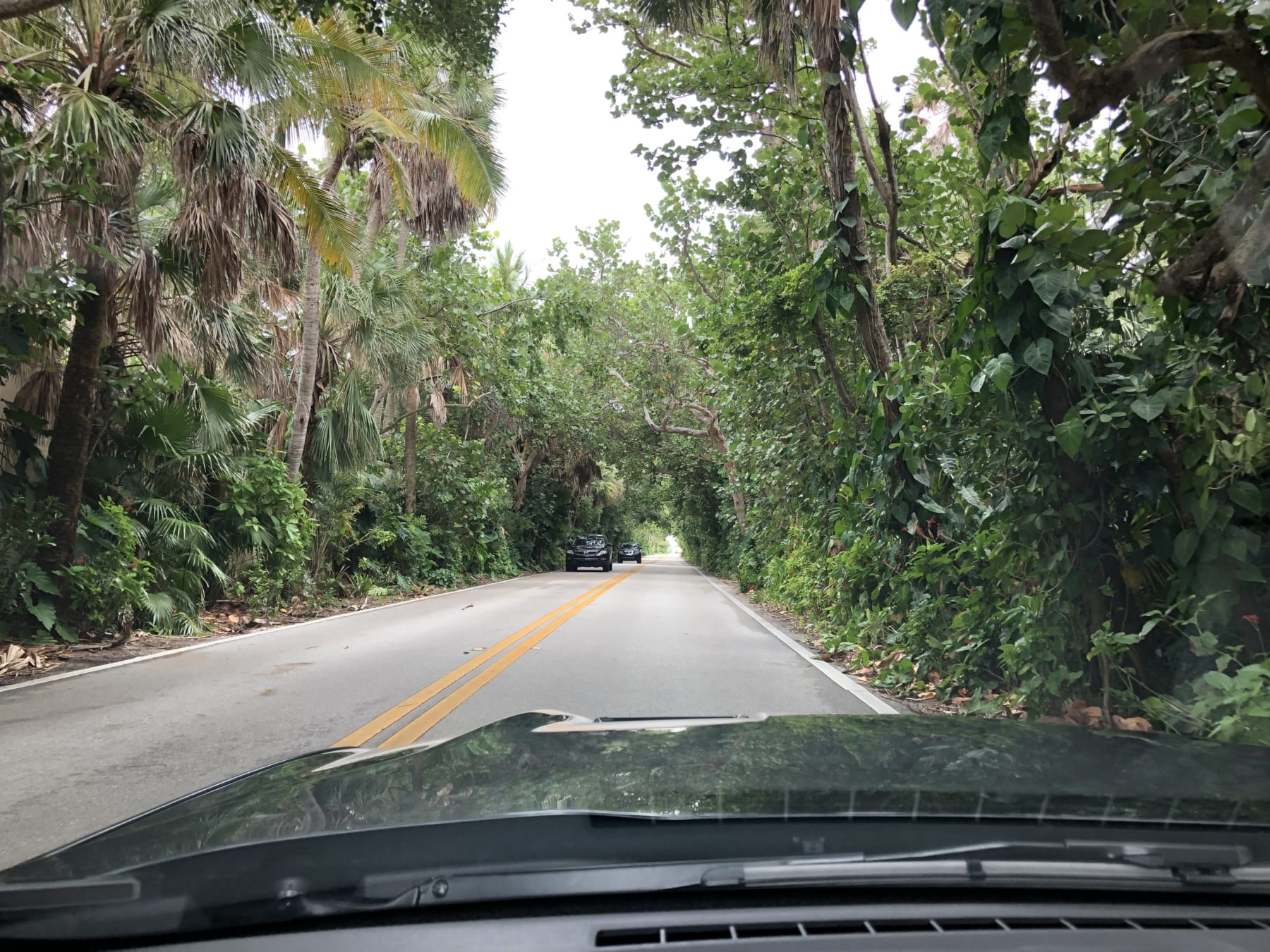 The takeaway for me from my time with the Mustang EcoBoost Convertible this is that modern drop-tops are simply amazing. They create a fully immersive experience. You don’t just drive a road, you live it and its surroundings. Modern convertibles are nothing short of spectacular. The Mustang might not be the best at any single discipline, but it’s a brilliant car. Driving one on a gorgeous stretch of road was peaceful in a way I had never before experienced. It doesn’t get any better. 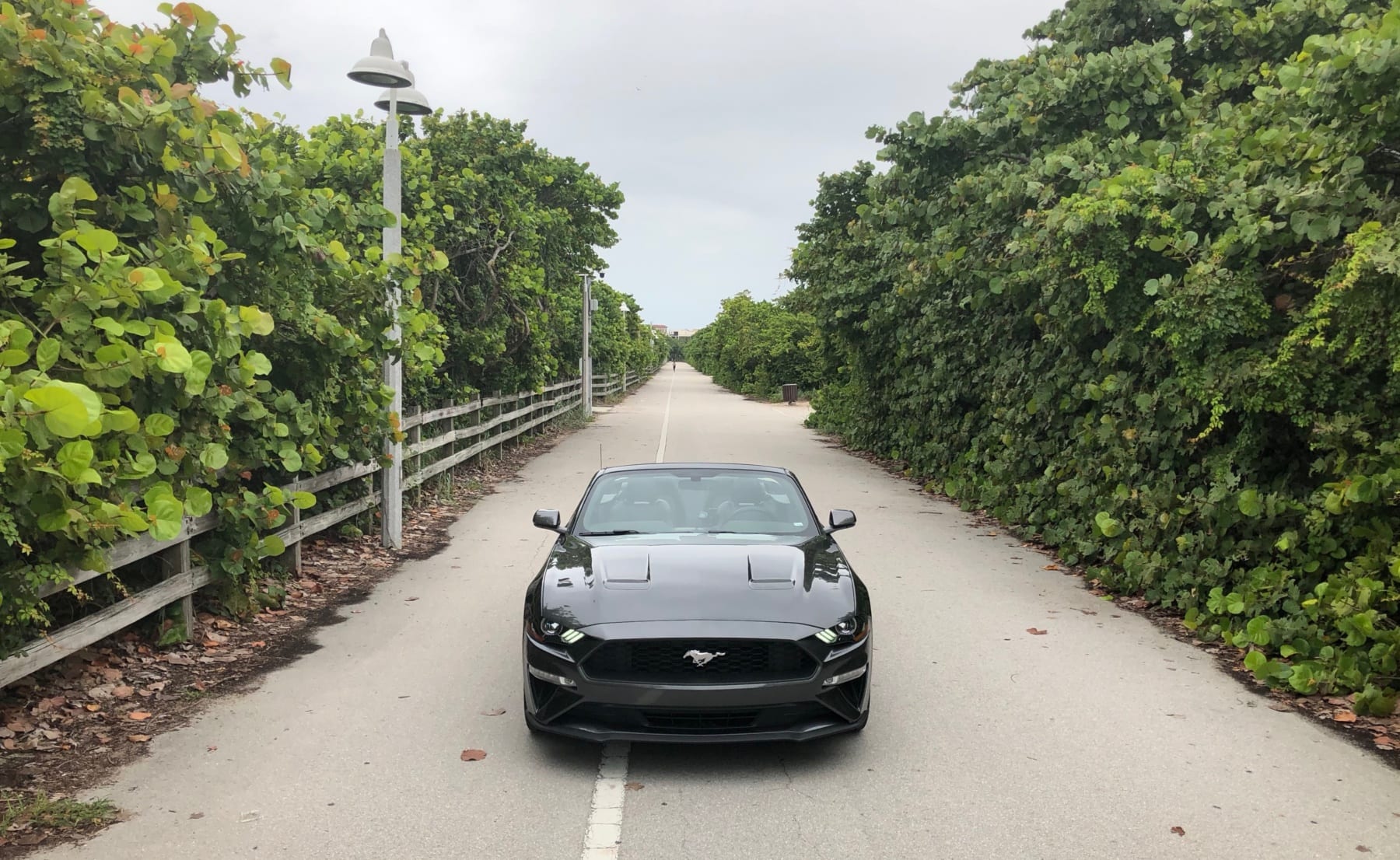