Dodge’s three-row SUV is in the autumn of its days now but is still kicking ass. In its segment it’s a unique vehicle due to its longitudinally orientated engine, giving it a rear-wheel-drive feel, and a unibody-ish chassis. That chassis architecture, dating to Chrysler’s partnership with Daimler, and nearly identical to the Jeep Grand Cherokee, gives FCA the freedom to mess around with the intents and purposes of this vehicle. The chassis works well with taller springs, locking differentials, and bigger tires if they desired an off-roader. But because Dodge markets itself as a performance brand it gives it a honkin’ V8 and a lowered suspension. 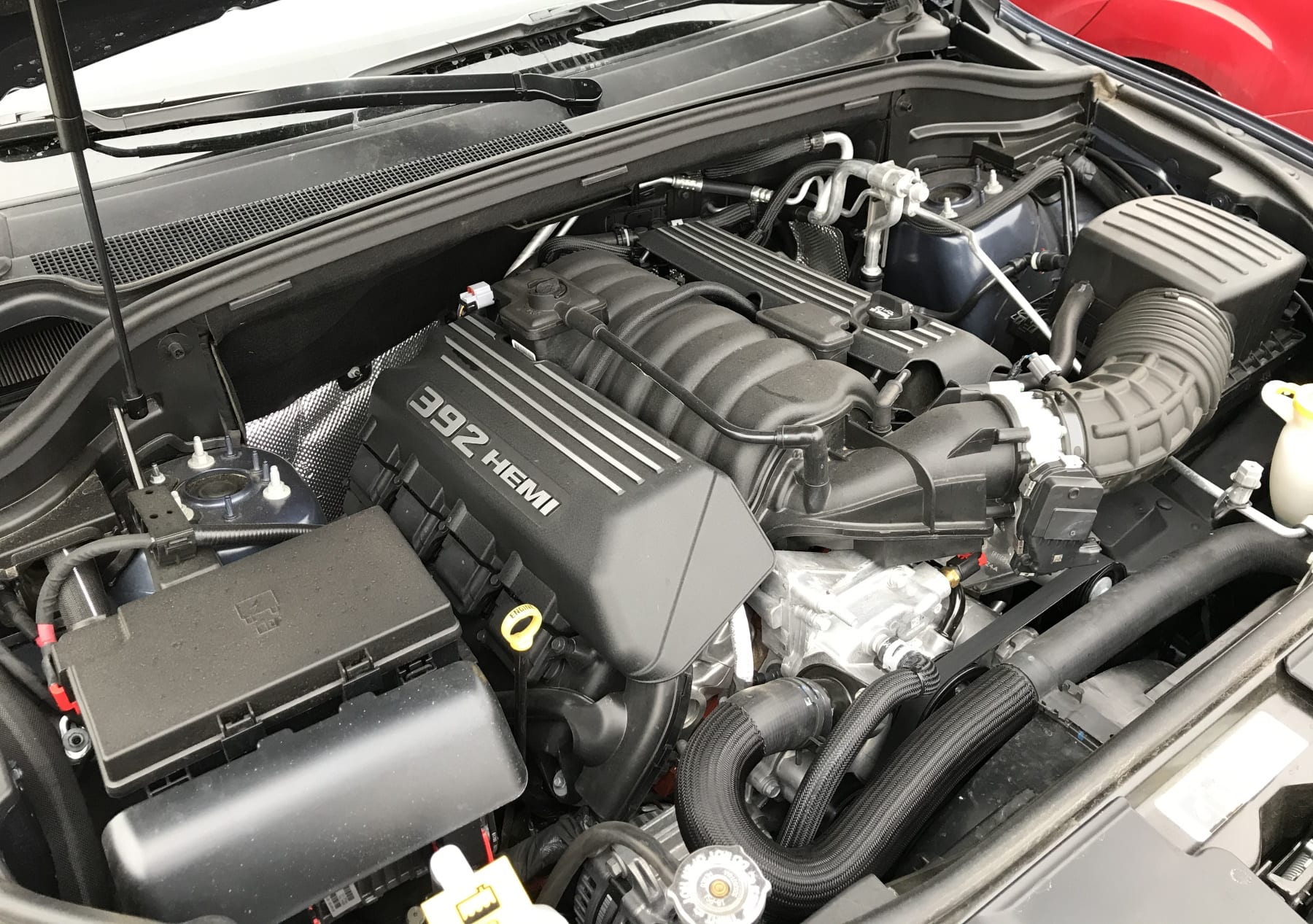 The 6.4-liter OHV HEMI vee-eight, as seen on other Chrysler vehicles, makes 475-horsepower at 6,000 rpm and 470 lb.-ft. of torque at 4,300 rpm in this application. While it’s not Hellcat power, it’s enough to send this 5,500 pound SUV from zero to 60 mph in 4.4 seconds and kill the quarter-mile in less than thirteen seconds. It’s crazy to think that these days this does not seem that fast but a thirteen-second car of any kind was damn fast not too long ago.

The suspension has been lowered and tuned for higher cornering speeds. The brakes are bigger, with optional front Brembo calipers. The wheels are wider, too, and wrapped in huge 295/45-20 Pirelli rubber. The hood, fenders, and other subtle spoilers add to the sporty appearance of the SRT.

Engine and muscle-look aside, the rest of the Durango is very similar to more pedestrian models. The Durango SRT comes as loaded as other higher-level Durangos but it gets its own upholstery and finishers. Aside from Performance Pages in the UConnect infotainment system, there do not seem to be any functional changes there. 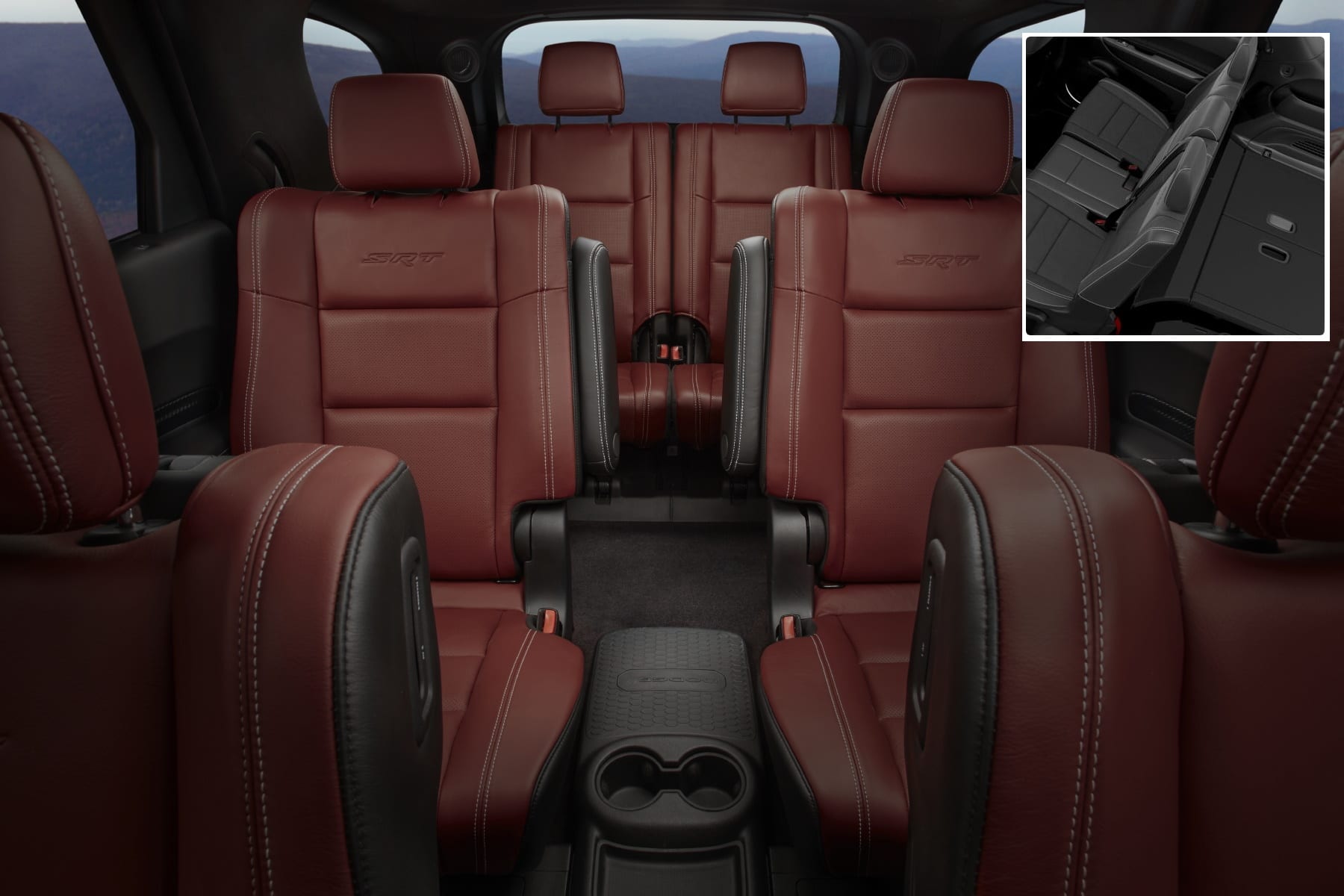 The Durango is a three-row SUV. The SRT comes with two individual middle-row seats and two third-row seats. This makes it a six-passenger vehicle. For those wondering, that’s only one more than the arguably better looking Jeep Grand Cherokee SRT, which share its powertrain (and the whole driveline, if we may be so honest). To me, the whole idea of buying a three-row SUV is to increase passenger capacity as much as possible. I’d, therefore, prefer at least an optional second-row three-passenger bench.

In the weirdest of weird things, however, Dodge does offer a second-row three-passenger bench seat. It is part of the Lightweight Performance Package. In the most ironic of ironies, that very same package removes the third-row seat in the name of weight savings, thereby reducing the seating capacity to five. It should be noted that the five-passenger Jeep Grand Cherokee SRT weighs 400 pounds less than the Durango. Dodge does not mention how much lightness the Lightweight Performance Package adds but I doubt that it is less than even half of that delta. 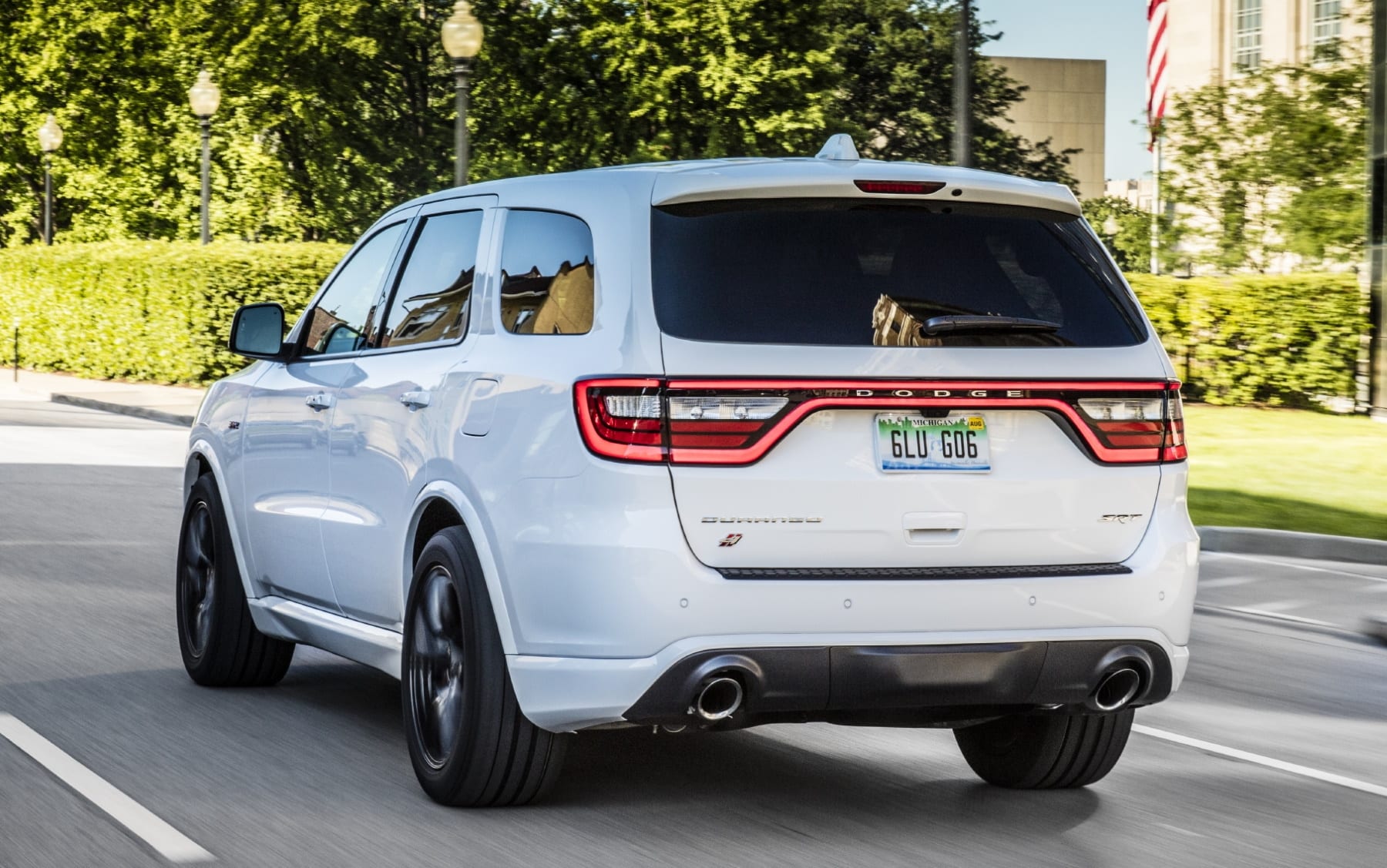 It will come as no surprise that the Durango SRT sounds great, especially at or near WOT. The big V8 roars as the big SUV blows by lesser commuter cars. The sound is addicting in that it begs to be heard again and again. And every time that engine roars it brings a smile to the driver. This is better for happiness than standard therapy.

There is an issue with the exhaust, however. There are two issues actually. The first is, dare I say, that the exhaust is too quiet. Really, it is. In a vehicle like this, I want an exhaust that is borderline obnoxious. But the Durango SRT is just pleasantly loud.

The second issue is that this exhaust is too loud. Put your pitchforks down and let me explain. When cruising on the highway, with cruise control set at a reasonable speed, the Durango SRT is annoyingly loud. The noise at that speed is droning. During a long highway ride, everyone in the Durango SRT will be really tired of that engine noise.

The simple solution here would be an adjustable exhaust system. A three-setting system would suffice: quiet, normal, and loud. This one little change would make the Durango SRT a much better cruiser and a better provider of smiles.

In its roots, the Durango is still a large utility vehicle. With second and third-row seats folded, it will swallow up a lot of cargo. My newly purchased 65-inch television fit in there with lots of room to spare. So did a four-by-six-foot whiteboard. The maximum payload is 1,590 pounds, more than the lesser Durango models by 200 to 300-pounds, depending on trim.

The Durango SRT also has a much higher tow rating than other Durangos, at 8,700-pounds. That is comparable with the largest of full-size SUVs. A Tow Package is needed for that. It’s $1,195 and includes a 7- and 4-Pin Wiring Harness, Class IV receiver, compact spare tire, and a trailer brake controller. 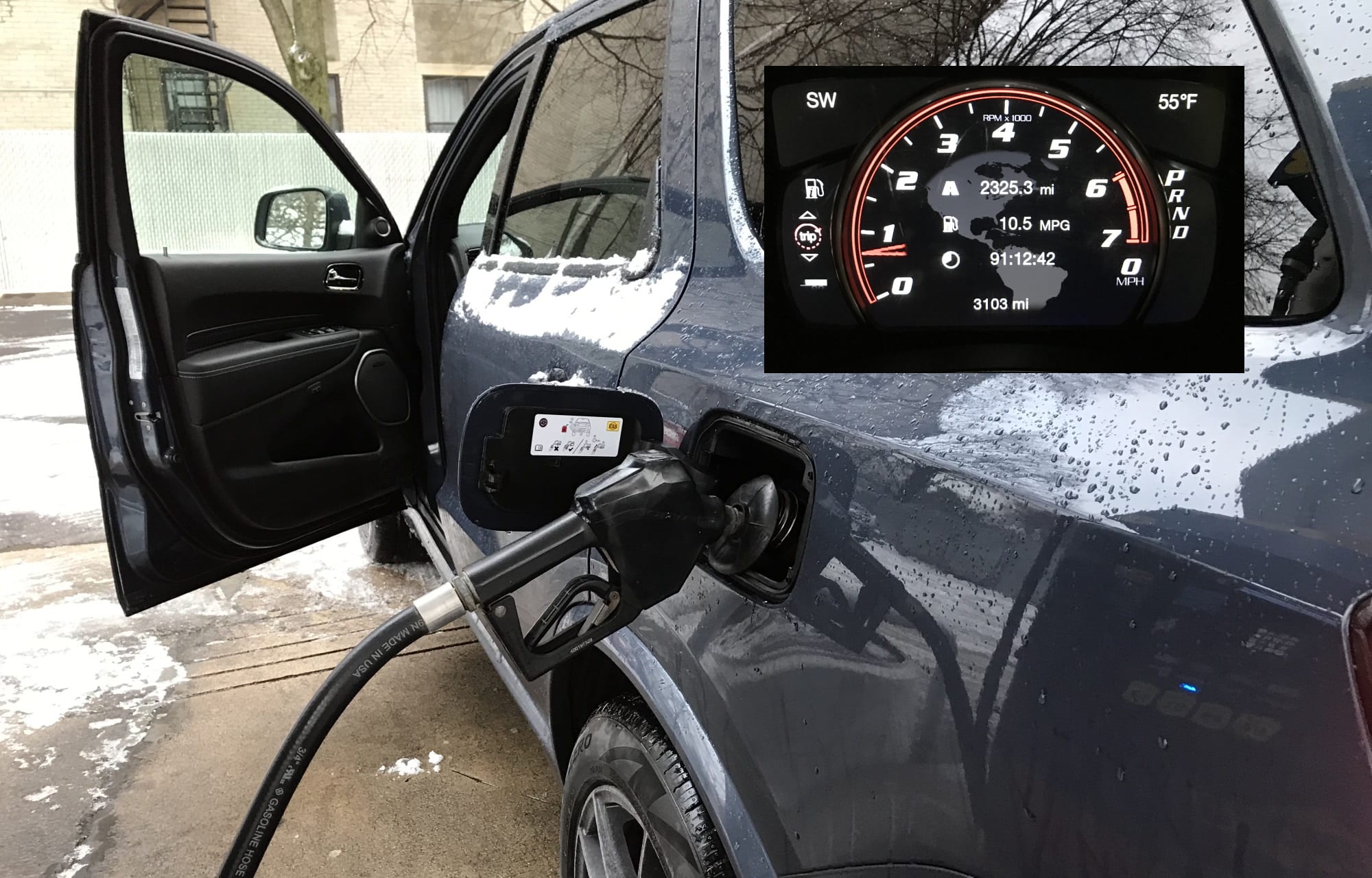 Having driven several Hellcats in my life I was always amused by their horrible fuel economy. Single digits in a Hellcat-anything is easily achievable. And everyone just laughs about that. But the Durango SRT is not a Hellcat-anything. I, therefore, would expect the gas mileage to be somewhat decent. But this press vehicle had a lifetime average of 10.5 MPG over 2325 miles. In my own driving, I did not do any better. It wasn’t until I set the cruise control on a highway at a very reasonable rate that I achieved mid-teens. 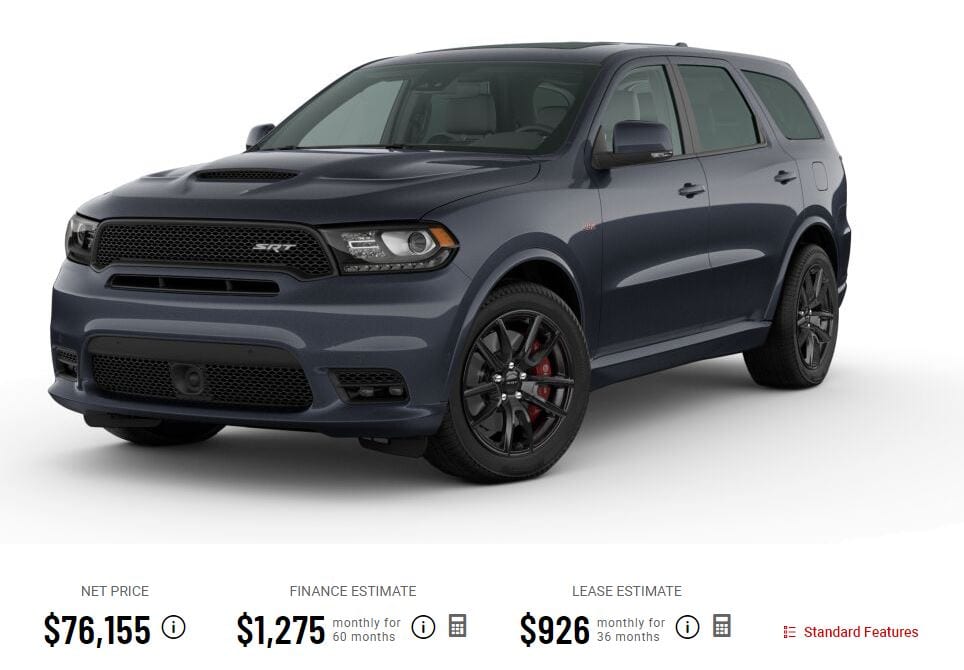 The base Durango starts at $30,495. But the SRT is anything but base and its starting price is $64,490. While loaded, things such as different wheels, high-performance brakes, fancy leather, sunroof, and a number of packages are available at an extra cost. Fully optioned, the Durango SRT can creep above $80,000.

For comparison, the previously mentioned Grand Cherokee SRT starts at around $70,000 and can creep up to $86,000. This may seem like a lot of money but the outgoing Chevy Tahoe RST Edition with 420-horsepower hovers around the Durango SRT’s price. Anything from Europe with similar capabilities will cost significantly more. 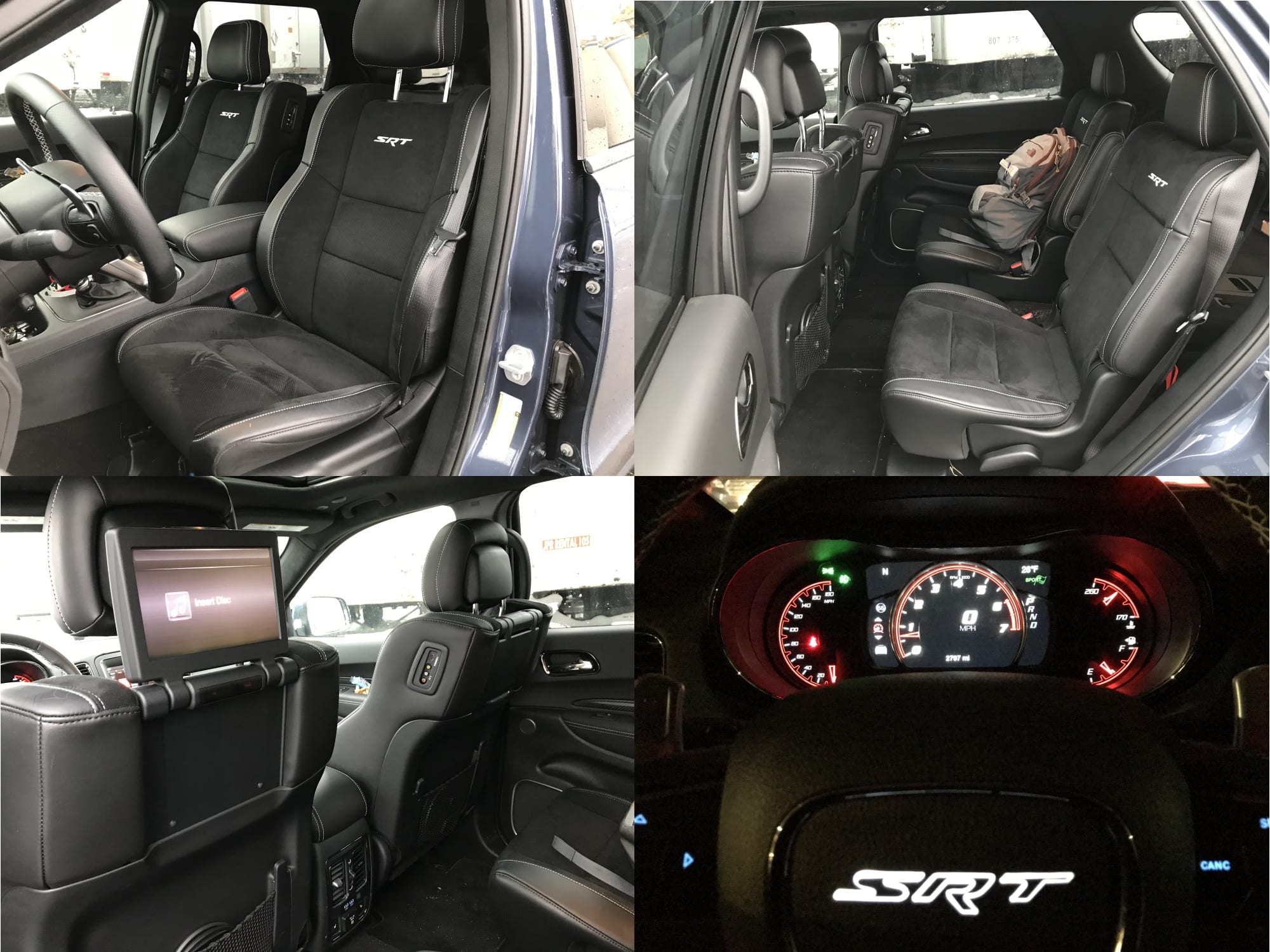 The Durango is an aging model into which FCA constantly manages to inject market relevance. The SRT is strictly a model for the enthusiast, probably those with families or towing needs. It’s meant to be a single vehicle that replaces a typical SUV and a sports car. Aside from the mentioned intricacies, it does everything it was designed to do very well. It’s big, comfortable, and certainly capable.

And if 470-horsepower isn’t enough…

[Disclaimer: FCA provided the vehicle for the purpose of this review.] 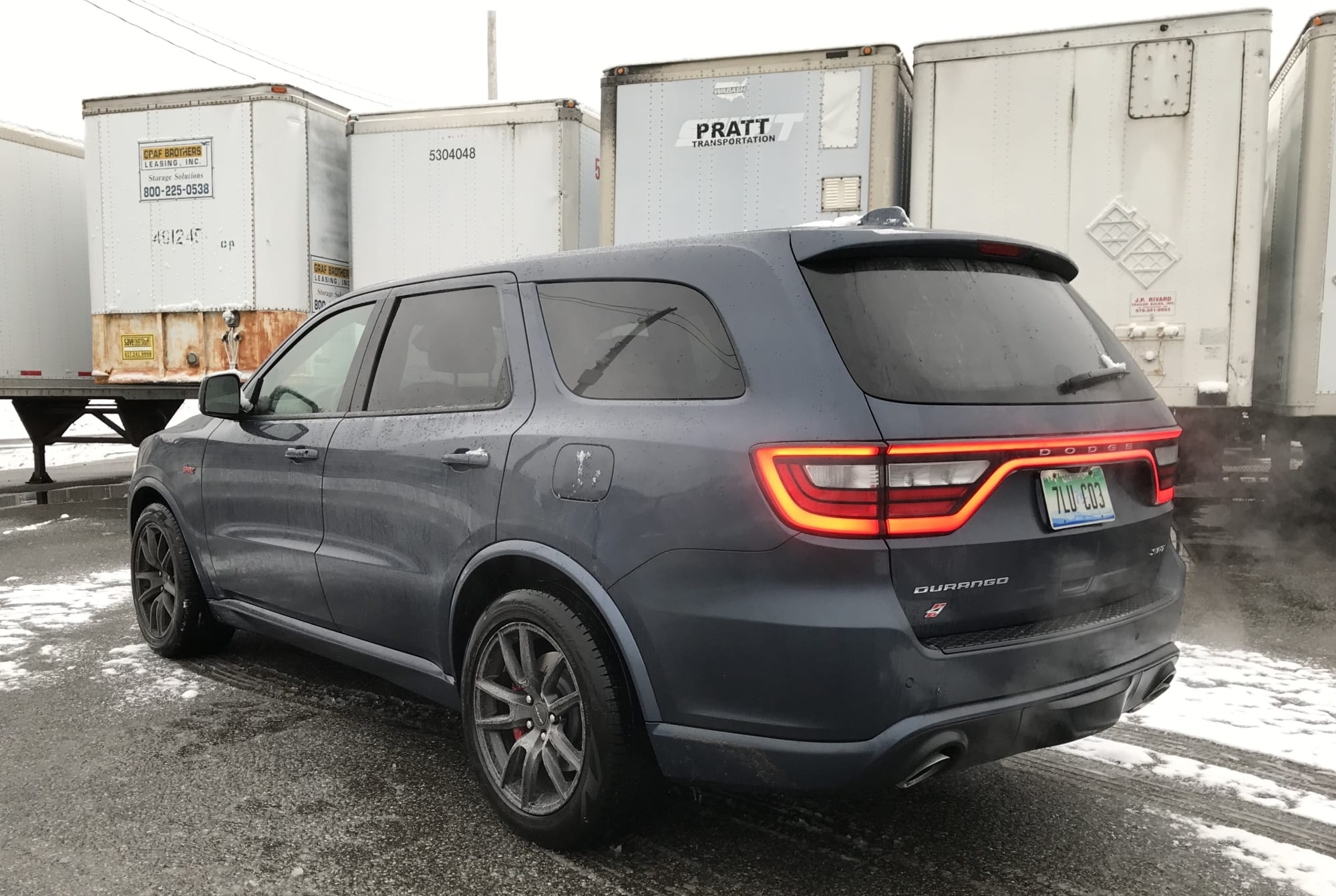