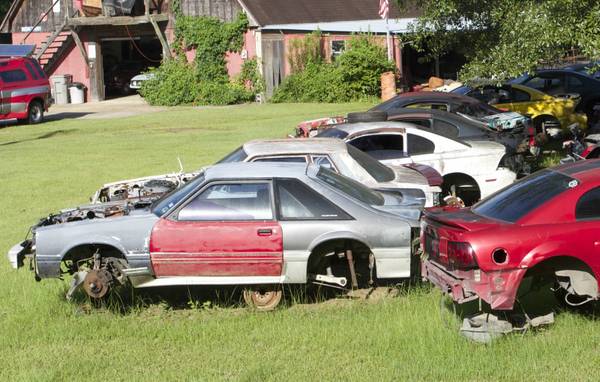 This listing floated across my Facebook feed this morning, and I knew immediately that it had to be delivered to the Hoons of Hoonville. This could be the beginning of something beautiful, or it could be a complete waste of money. If you’re willing to do some wrenching (and who here isn’t), there could be a real money making operation on offer here. The listing features a yard full of 38 Fox body Ford Mustangs that you can have for literally pennies per pound. The unfortunate death of the yard-owner is forcing the sale, and the people who are charged with dispersing the crusty crowd of cars simply wants them all gone in one fell swoop. Everything for one price, one price for everything. Hit the jump for more information. 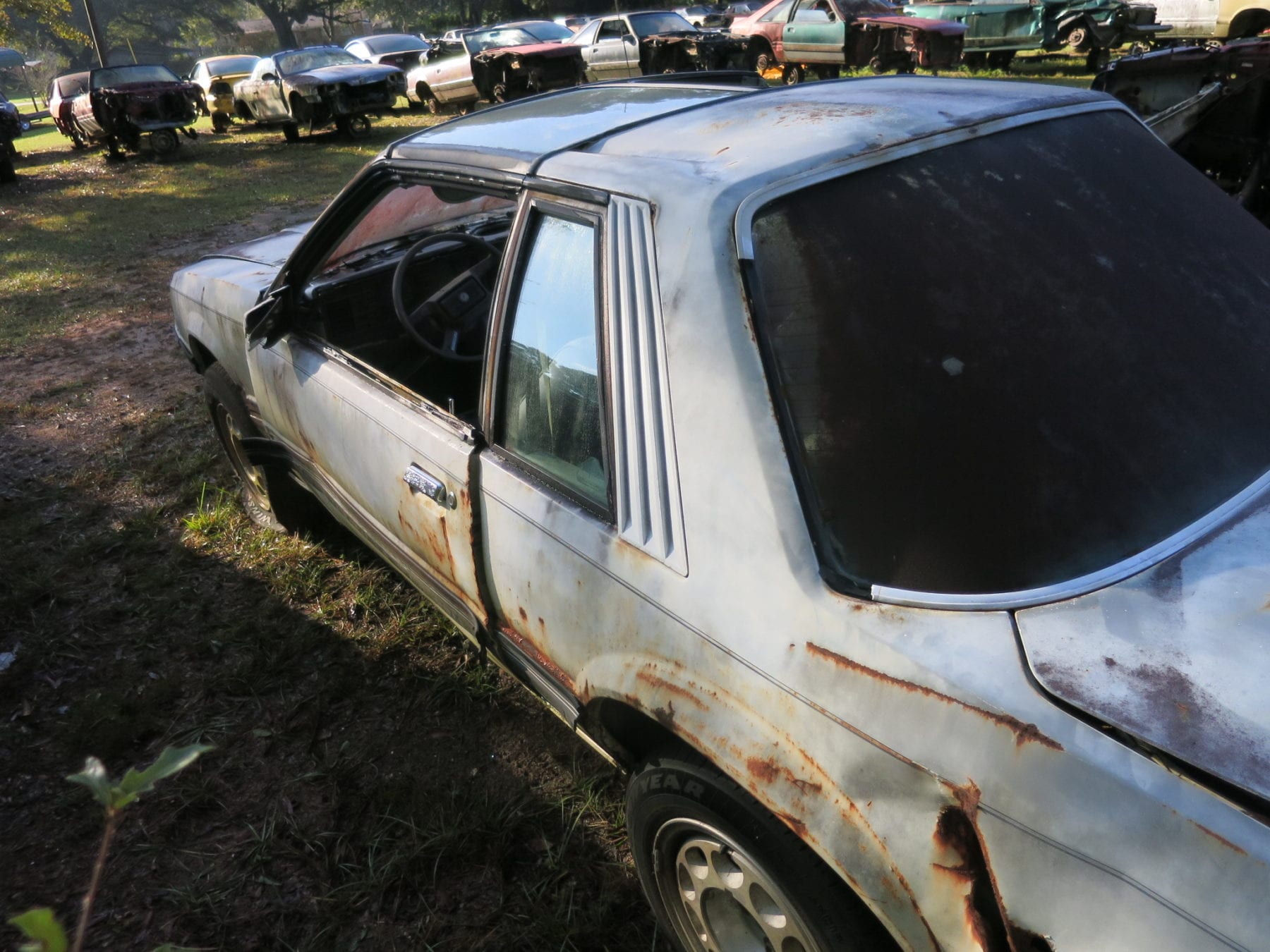 Sorry to say this all has to go because of Bob’s passing so we are in need of closing this chapter of the previous owners wife’s life by clearing the land so one way or another its all gotta go and it might be your luck day. You are buying the complete inventory of Fox Body Mustangs “38” total parts cars. This includes all the the parts and cars from 1979 – 1993 inventory at Mustang Village which was a thirty plus year old Mustang parts business that has now closed. As is shown in the photos all the cars have removable parts at least equal to the scrap metal purchase price we are asking for as the value of the cars so you just can’t lose.. On the cars you will find sheet metal like hoods, bumper covers, fenders, roofs, doors, trunk lids spoilers and exterior trim. Inside there are front and rear seats, convertible top frames, steering columns, dash components and trim. Some cars have motors and transmissions with most still having wiring looms like under dash and under hood lighting. Some cars have front suspension including spindles and steering linkage as well as rear ends. There are quite a few whole cars with many others that have motors with transmissions and we will be adding all kinds of other period correct items like 5.0 and 3.8 motors and AOD transmissions at no additional charge to clean up the yard. There are several pallets full of parts including countless other bits and pieces that are loosely thrown in the cars as well as on the property all of which are included in your purchase. This is a great opportunity of someone to get set-up in a Mustang parts business for these model cars. Removal of all remaining cars will begin February 3rd. If you want to strip the cars of the parts and load the ones you wish to keep and leave the rest we have a local scrap yard to take the leftovers. Should you need other information I do not have an interest in the later model cars but will try to assist best as I can as I have a pretty good idea of the inventory. Having been selling parts for over 30 years each car has at least 1 desirable piece that will exceed the purchase price of slightly more than 100.00 per car, thanks Freddy! Follow this link to see all 38 cars: https://www.evernote.com/pub/freddy415/mv-79-93

Having sifted through the list of cars available, it appears that most of them are LX cars, a heavy percentage are convertibles, and most are 2.3 liter Lima-engine powered. There are, however, a couple GTs in the list, as well as some early four-eyes cars that are of particular interest. with 38 total cars, there’s bound to be at least a couple hundred dollars worth of parts (and scrap metal) on each one of them, and that’s nothing to mention of the pallet loads of extra 5.0 liters, AOD transmissions, and 3.8 liter V6s that are included as well. It would be a lot of work and effort to transport 38 cars, and there is certainly cost involved in such a venture, but it is entirely possible that someone could clear tens of thousands of dollars on the sale of various parts from these cars. Good glass, GT side trim, perhaps a well optioned rear axle or two, and various other clean pieces in this pile, there’s definitely something worth thinking about if you wanted to wrench for the rest of your life. If nothing else, this post is worthy of a daydream or two. What would you do with 38 Foxbody Mustangs of various levels of decrepitude? Where would you store them? How would you determine what is worth keeping and what is worth selling? If you had a decent amount of warehouse space, this could be the beginnings of a very lucrative Fox body restoration parts supply company. As these cars age, and are continued to be driven on the street, more and more people will want to restore a half-assed decent one back to nice condition. People like me, who grew up in the 1990s, idolized these Mustangs, and it’s entirely possible that these will soon make a comeback as a collectible car. They’ve long been a great bang-for-the-buck racer, but mark my words, they’ll be proper restoration candidates within the next 5 years. Look at what Kamil has done with his Acura. People will be doing that to Fox Mustangs and IROC-Zs in no time. Source: Jacksonville Craigslist