Welcome to Craigslist Crapshoot, our weekly search for the most bizarre, awesome, and/or terrible vehicles that the online classifieds has to offer.  The U.S. and Great Britain have a lot in common, not least of which is a passion for trucks that love the muck. Here in the States we have the Jeep, born out of WWII and as important an icon of our nation as the Bald Eagle or super-sized portion of fast food. Great Britain has the Land Rover, which also saw its inception during the War, and which only recently saw its paleo-parent – lately called the Defender – end production. Last week we celebrated Land Rover by looking for some excellent choices of that marque on the used car market. We’ll see which one tops the cake in a sec, but first we need to go back to the future. Okay now, by that I don’t mean we’re looking for Deloreans and Toyota pickups. The future I want us to go back to is one in which cars had… digital dashboards. Yep, from the seventies through the ’80s it seemed as though the digital dash was the wave of the future, a future than never really materialized. Let’s go back to that, and see what we can find for sale that still lights up our lives. As always, we want your finds to go down in infamy and not in the site’s spam filter. Since we’ve changed commenting systems, you may need to update your commenter account. Make sure you have a Disqus account – they’re free and easy to get – and then comment away.

Got that? Good, now let’s roll over Rover.

For a car make with a reputation for carrying Great Britain through the war, Land Rover’s more recent reputation for surrendering to mechanical failure might have you shouting bloody hell! The worst offenders are the often most expensive ones – like the ’97 Range Rover found by Andrew_theS2kBore, but the cheap seats LR2 also has a rep for amazing levels of disappointment, and Lokki shares a story of a friend who owned one for all of 45 days and who wishes to get those 45 days back. You can’t beat the original, although even the Defenders had their issues. If you’re going to own one however, you might want to get the toughest, most hirsute version you can, and that’s why this armor-plated and grenade-launching Land Rover – also found by Lokki – is our pick for what should be your pick. Thanks to all for playing, and congrats to Lokki and sympathies to Lokki’s LR2-tainted friend. 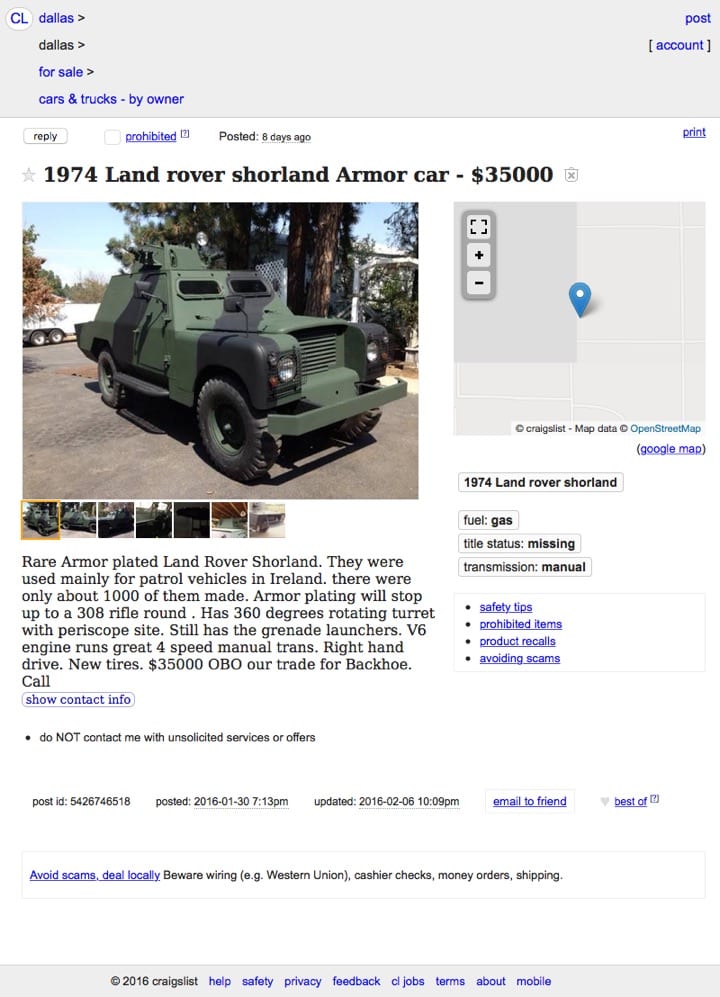