Since its introduction in 1984 the Toyota 4Runner has become a forever player in the off-road capable, street-friendly SUV segment. Now deep into its fifth generation, the venerable 4×4 is still posting strong sales numbers. But prior generation trucks are holding up well, and the options for a reliable, comfortable, trail-happy rig are more than ever. And yet, some are viewed more favorably than others. On sale from 2002-2009, the 4th generation 4Runner falls more toward the unloved side. How does it compare to its successor? Neither vehicle is perfect but the similarities and differences are vast. Let’s break down how the 4Runner changed for its 5th gen, how it’s better, and so on.

First let’s look at the specific vehicles here as it’s not a perfectly direct comparison. The 4th gen is represented by my recently-sold Stormtrooper 4Runner, a 2005 Limited V6 (the beloved 4.7L V8 was available). With nearly 155,000 miles and the majority of its life spent in Canada, on off-road trails, it was a bit worse for wear. It was also very modified. The 5th gen is represented by my newest acquisition, a 2018 TRD Off Road Premium. It now has close to 22,000 miles and is wholly unmodified.

Where to start in comparing two trucks separated by thirteen years? On the outside, of course. Admittedly the 4th gen body is not the most visually attractive in the model’s history. The bulbous and semi-bloated bodywork doesn’t lend well to its shape. More curvaceous than chiseled, it needs modifications to truly look good. This is rather contrary to the 5th gen. Introduced as a 2010 model year vehicle and refreshed for 2014, the truck looks just right for its intention. Meaty and chunky in all the right ways, it certainly looks bigger and more substantial than the 4th gen. And it is: 2” longer, 2” wider, and depending on trim 300-400 pounds heavier (~4400 vs ~4750). And yes, both have the ever-crucial roll-down rear window.

Things are similar on the inside. The 4th gen is simply more car-like. You sit stretched-out versus upright in the 5th. Both have good space overall and make efficient use of the exterior dimensions that house them. Likewise, both have serious ergonomic quirks. For example, the driver’s door window switch control locations are both awful. In the 4th, it’s low on the door, down below the handle. Accessing such can be cumbersome and inconvenient. Toyota attempted to remedy this in the 5th gen by putting the switches on a flat surface at the base of the window. This makes them easy to use when resting one’s arm on the window sill itself but otherwise inconvenient as well. Both locations are bad.

Other peculiarities are present as well. The 4th gen’s HVAC controls were certainly unique but are nowhere near as logical or direct as those in the 5th gen. Also, in the 4th gen the ignition is on the dash, out of the way. The location never moves, regardless of steering wheel adjustment, and is easily visible from the driver seat. In the 5th gen it was moved to the steering column. In turn it’s harder to see and harder to find. And it must be said that it’s utterly ridiculous that a ~$40k, 2018 model year vehicle even requires use of a real key. 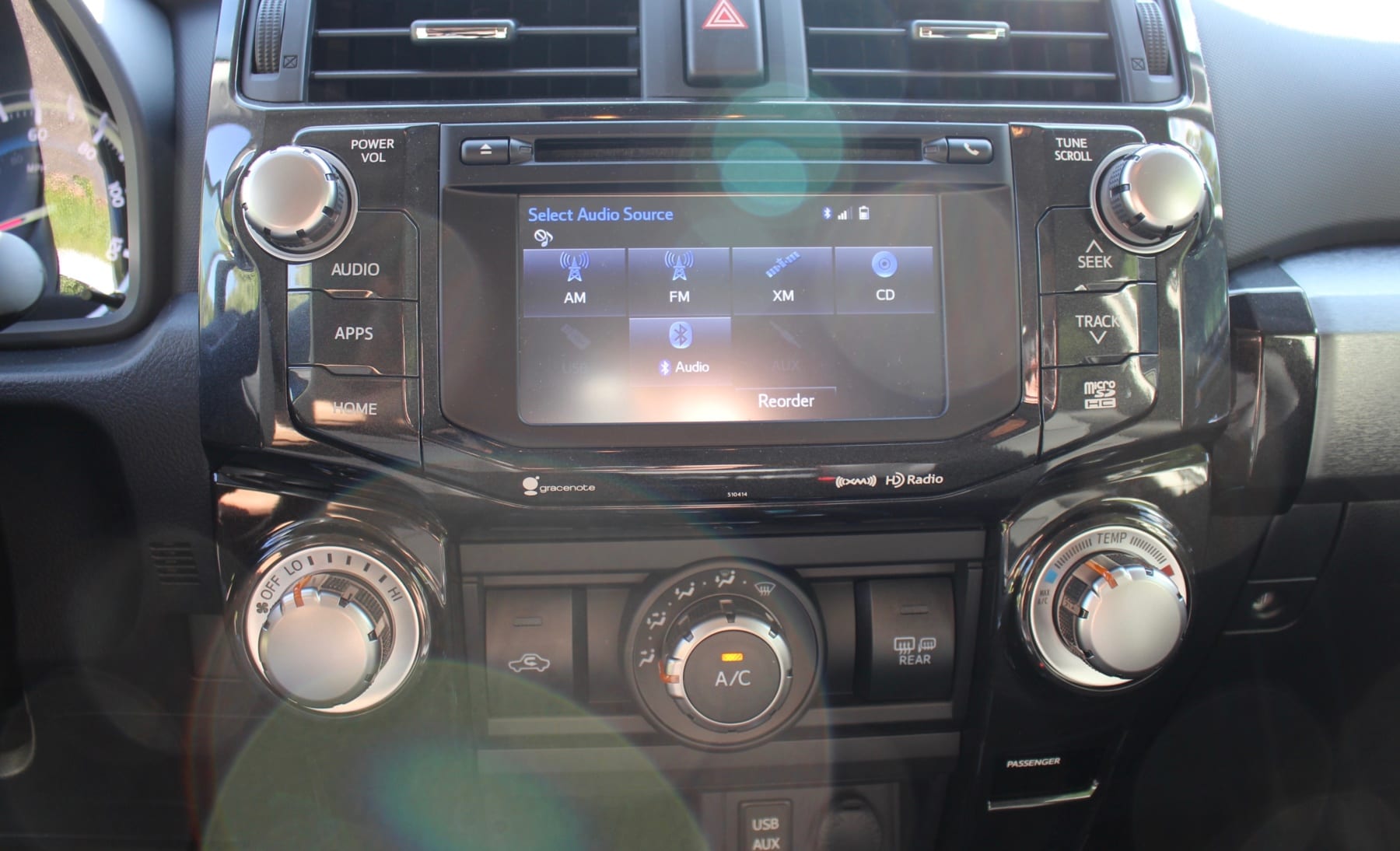 A few items favor the 4th gen’s interior. Among these are the steering wheel controls. They are simply more intuitive and situated where one’s hands rest more frequently. Same goes for the 4th gen’s seat heaters which get hotter and emphasize more critical locations on the back. What the 5th gen does do drastically better is the forward visibility. The a-pillars are quite a bit smaller and the seating position affords a much more commanding view of the road. 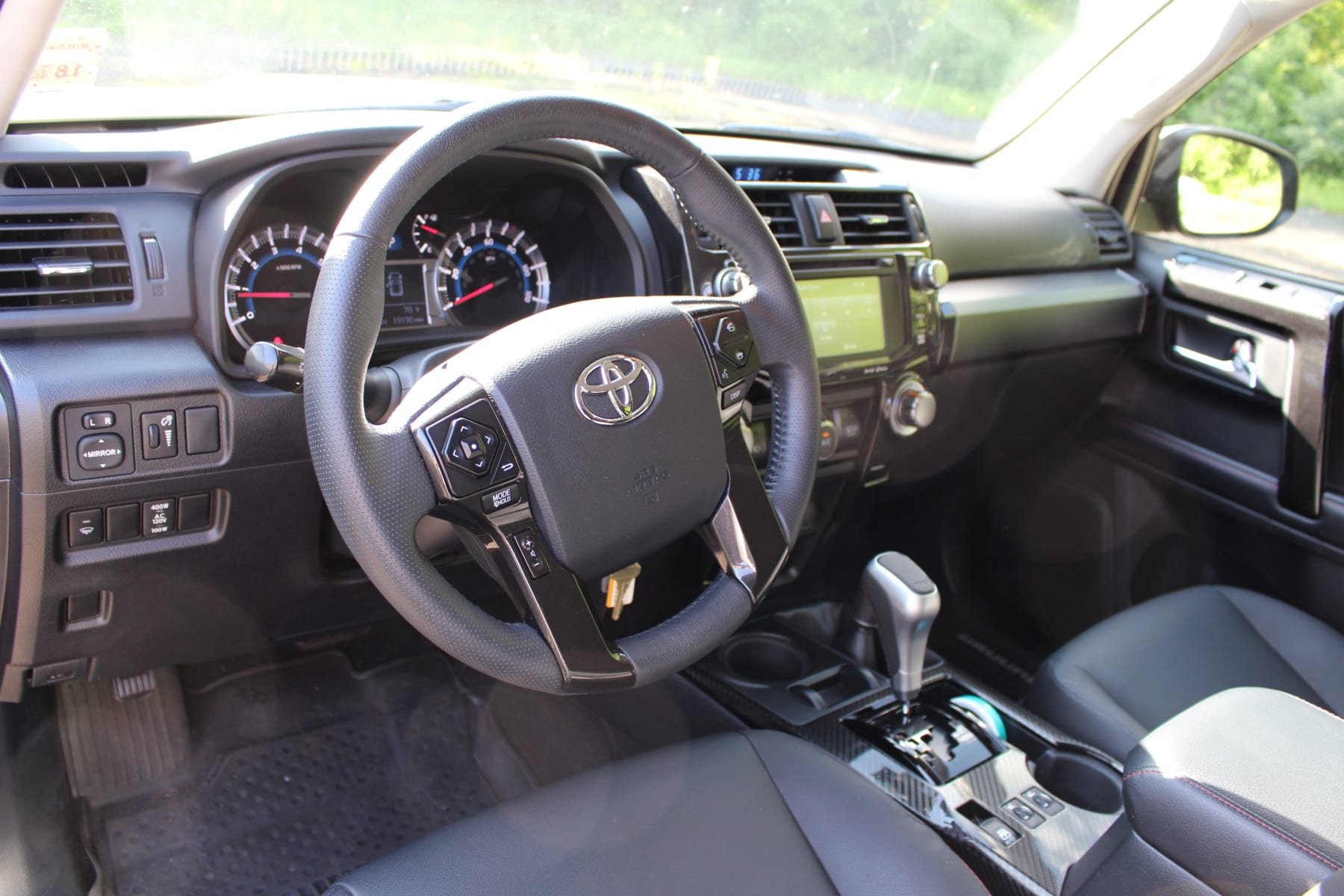 Overall both interiors are plenty fine. Neither is a tech master for its respective time period, neither is the most modern available. But they’re reasonably comfortable and boast more airy passenger compartments and more cargo room than comparable Grand Cherokees which are of near-identical length. 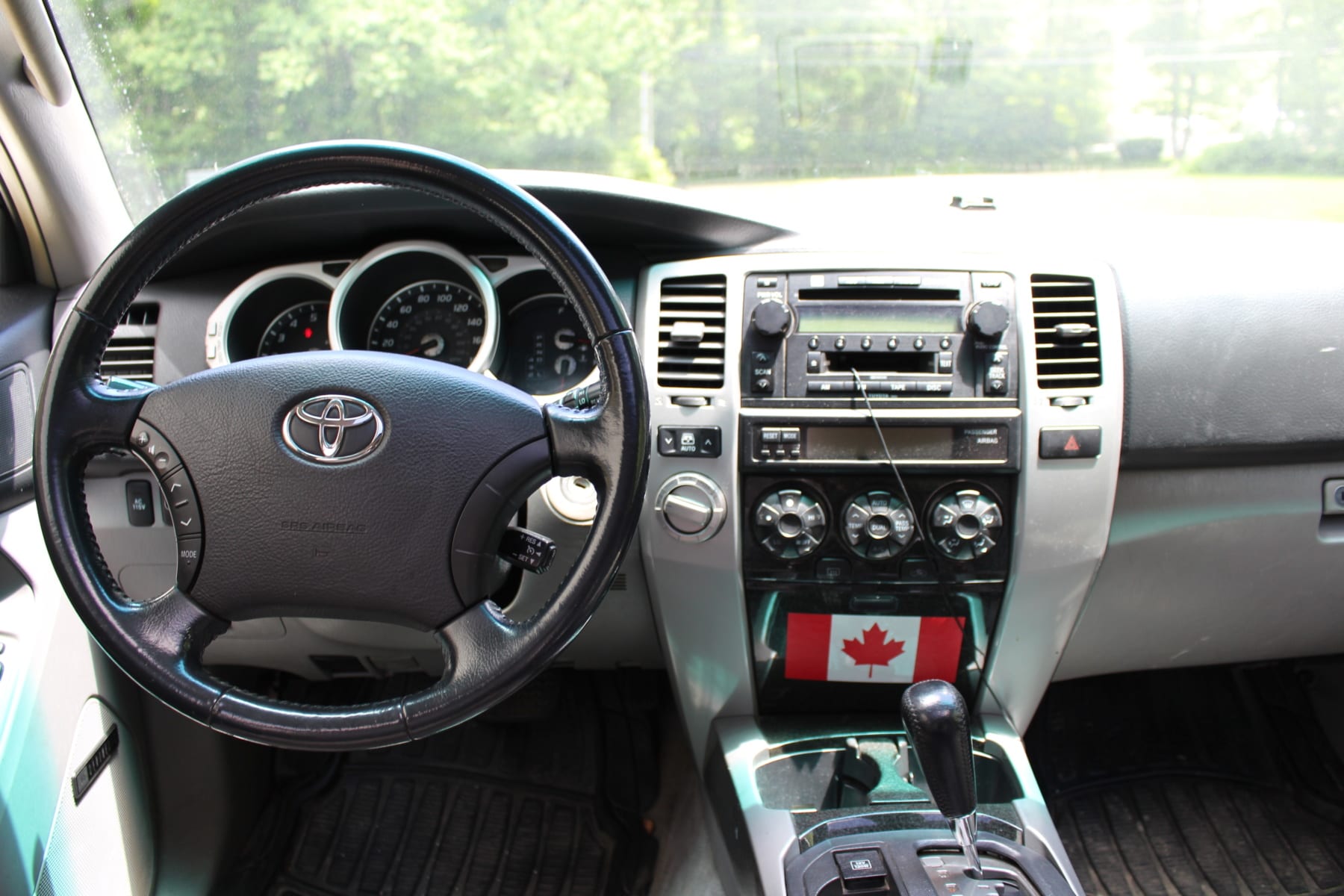 Both trucks have 4WD and share a variation of effectively the same powertrain. Both use 5-speed automatic transmission (early 4th gens had a 4-speed). All that differentiates the engines is the addition of Dual VVT-i. While the 4.0 is perfectly adequate it didn’t exactly set the world on fire when it was new. Today it’s severely lacking behind the competition.

The big difference lies in the 4WD systems. Do note that due to the difference in trim levels this is not an apples-to-apples comparison. Having a 5th gen Limited on hand would be the only way to do so as the 4th gen didn’t have a TRD or proper off-road variant. Operating the 4th gen Limited’s 4WD system is done by way of knob-style selector affixed to the dash. The options are 2WD, 4WDHI and 4WDLO. It’s simple and effective. Hitting the A-TRAC button sends equal power to the front and rear axles. It is not a substitute for lockers but it works well. Downhill Assist Control is also present.

The 5th gen TRD Off Road separates itself with a slew of off-road hardware and tech. The manual shift lever feels properly old-school and engages with authority. Like the 4th gen Limited it offers 2WD, 4WDHI, and 4WDLO. But there’s more. The overhead console houses a number of other controls. Included in the package are a locking rear differential, Crawl Control, Multi-Terrain Select, and A-TRAC. It’s not the most advanced wheeling machine but it gets the job done. Also present is a button allowing the traction control to be fully disabled, yes, even when in 2WD. Snowy parking lots might as well be Gymkhana fields.

I hesitate to draw direct comparisons in road behavior due to the modified nature of the 4th gen truck present. The 4th gen is comfortable, the 5th the same. The 4th gen rides and sits more car-like, though there’s no escaping the fact that it’s still a reasonably large SUV. Most noticeable is how the 5th gen’s on-road presence feeling more truck-like even in stock form.

In terms of livability the two are quite similar. Dimensionally there’s next-to-no difference. Updated tech marks the biggest change on the 5th gen. It simply makes it a nicer, more modern place to be. In the real world the improved outward visibility plays a nice role, too. All-in-all the 5th gen is easier to live with, boats more modern (albeit still outdated) tech, and still acts like a perfectly normal vehicle.

In the end the 5th gen is everything I like about the 4th gen but better and more modern. Though the two trucks here are not directly comparable due to differing conditions and states of modification or lack thereof, it’s still interesting to line them up side-by-side. Wildly differing price ranges mean the 4th and 5th gen trucks likely won’t compete for the same buyer’s dollars but either option offers a strong 4Runner and a strong vehicle for the money.

The 5th gen 4Runner is still a 4Runner, and is better than the 4th gen in countless ways. And yes, comparing an older, somewhat beat-up 4th gen to a nearly new 5th gen isn’t totally fair. But none of the age detracts from the core of the truck. And certainly not from the deliberate design elements both inside and out. In its fourth iteration the 4Runner was a true, strong SUV. Toyota managed to improve on the 4Runner in every way in going to its 5th generation. It’s old and antiquated compared to much of the competition but it’s still a 4Runner, it’s still honest, and it’s still great. 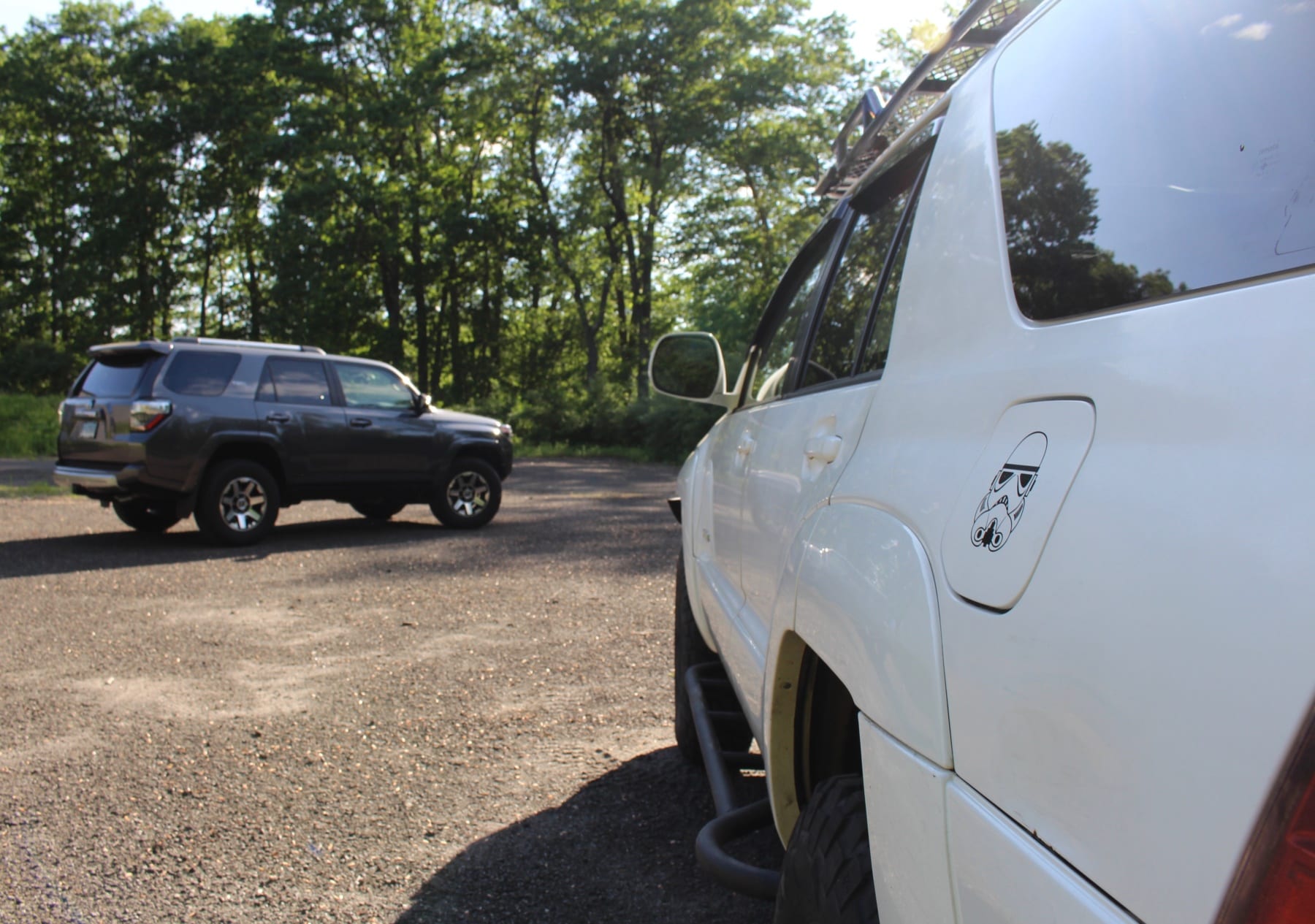