City Living with a 2019 Ford Raptor

Developed by Ford Performance to pounce the desert at high speeds, the Ford Raptor needs no introduction. In off-roading, the only limiting factor of this racer truck disguised for the street is its size and weight. Interestingly, one would think the same when driving this truck in big cities.

To see how it is to live with in the city, I volunteered to spend a few days with the Raptor in downtown Boston.

Life in the city

At over 78-inches in height, the Raptor did not fit into my city garage, which has a maximum clearance of six feet and three inches. So the Raptor spent its nights in an outside parking lot. This is a good time to mention that the remote engine start has a very long range. On cold mornings, the Raptor is nice enough to remotely turn on the butt and steering wheel warmers for your frozen behind and freezing hands.

My next stop was an obvious one; the local Whole Foods on a Sunday morning. There was plenty of parking spots in the small lot, so I took up one and a half of them, further away from the entrance to the store. Everything was fine and dandy until the Raptor was upstaged, and probably out priced, by another vehicle that went on the same Whole Foods expedition. 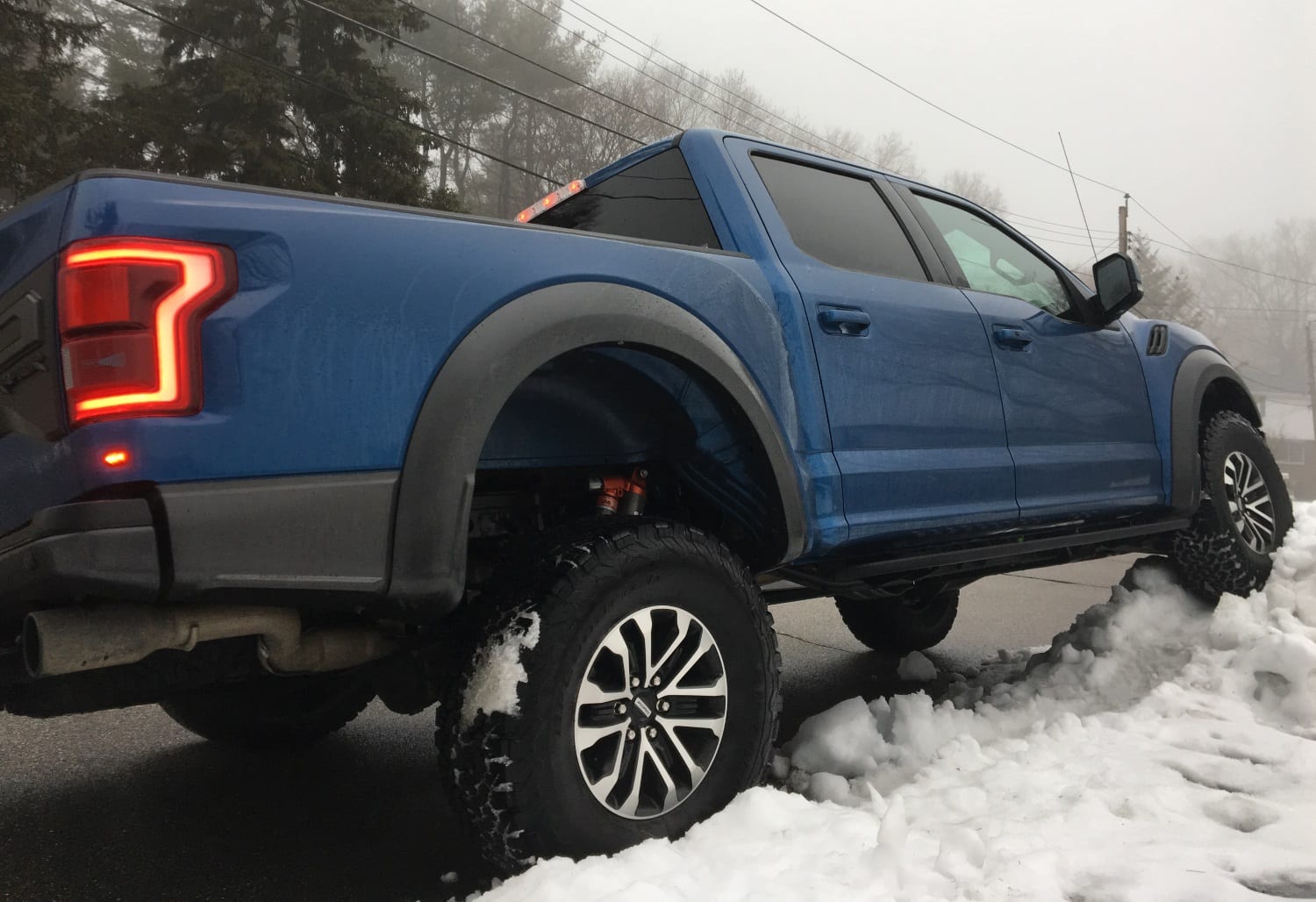 The cab of this SuperCrew Raptor is enormous. Those that haven’t been in a modern full-size truck, go drive one. The S-class has nothing on this. The front thrones will make even overly large people feel comfortable. The rear seat has more legroom than any other vehicle that I know of, including the LWB Range Rover. The fact that this vehicle was fitted with the luxury $9,365 802A package didn’t hurt things, either. That little check box on the order form adds heated and cooled front seats, upgraded lighting, all of the back-up and trailer assist goodies, and a nicely upgraded sound system, amongst many other things.

But there’s a problem. It came up on my weekly grocery run. I rolled out of the store with a shopping car packed with two dozen grocery bags. While all pickup trucks have large beds, only one has a trunk, and it’s not the Raptor. I could have just done something Clarkson-ian and put my groceries in the open bed, allowing them to roll around, possibly fall out, and then tell you how pickups suck. But I didn’t. Instead I raised the cushions of the rear seats, which yields a ton of floor space, and placed my groceries there. This would have been a problem if I had passengers. 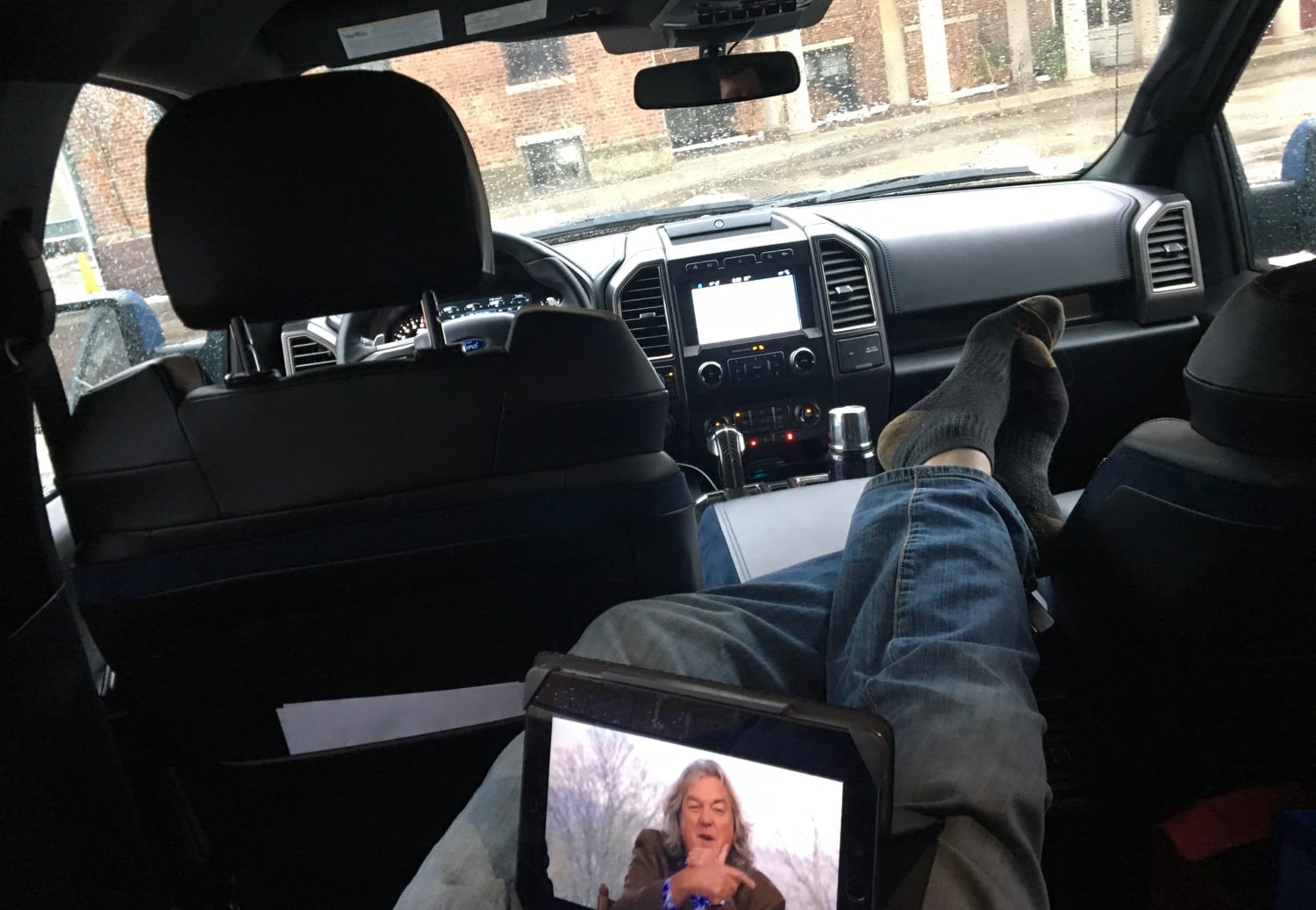 Being a parent means that you’re also a chauffeur. During my daughter’s 90-minute lacrosse practice I usually go to a coffee shop. I spend my time sitting in a small wooden chair, working on my laptop or watching something on my iPad. That didn’t happen when I had the Raptor. I got a thermos of coffee from home and made myself comfortable in the heated back seat. With my legs on the center console, I was very comfortable. Things would have been so much better if there was a fold-out table to rest my tablet on, but that’s asking a lot. Still, there were 12-volt, 120-volt, and USB sockets that allowed charging of just about anything.

The roads around Boston in these late-winter times, and any other time really, are filled with potholes. There are many of them and some are huge. The city does a decent job filling the biggest ones but new ones are created seemingly overnight. The great news is that in the Raptor you won’t give a shit about any potholes. Those meaty 35-inch BFGoodrich KO2s suspended on new-and-improved-for-2019 Fox shocks will just power over any pothole with authority. One could say that driving around Boston is like an off-road race and the Raptor is the best vehicle for it. 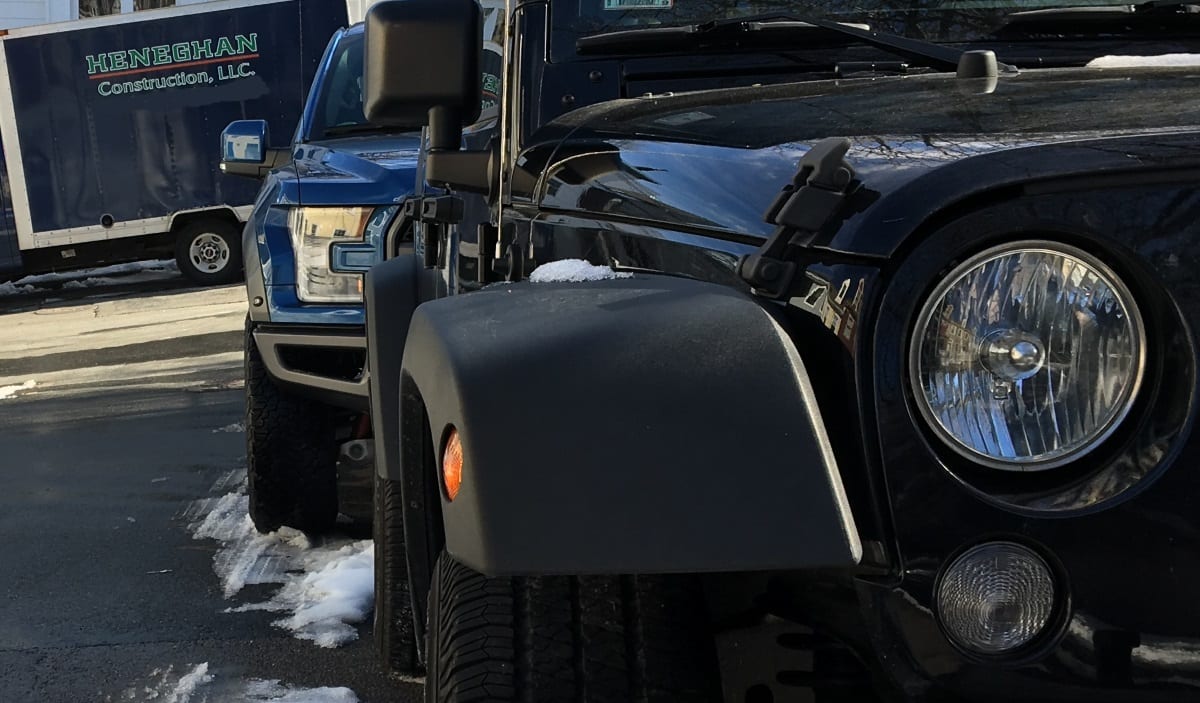 The Raptor is over 86-inches wide. That is so wide that is requires the federally mandated clearance lights. This width, at least at first, can be intimating to the driver and traffic lanes and old city streets will seem far more narrow than you remember. The good news is that the seat can be adjusted very high and the large, low windows provide excellent visibility. The ability to see over even large SUVs will make you grin.

Street parking requires patience and luck. Luck is needed to find a spot big enough and patience is required to fit this big, wide beast into those spots. When I parked behind a Jeep Wrangler, the Raptor seemed a foot wider, because it is. For those who frequently park in tight places, it’s best to opt for the package that has 360-degree cameras. 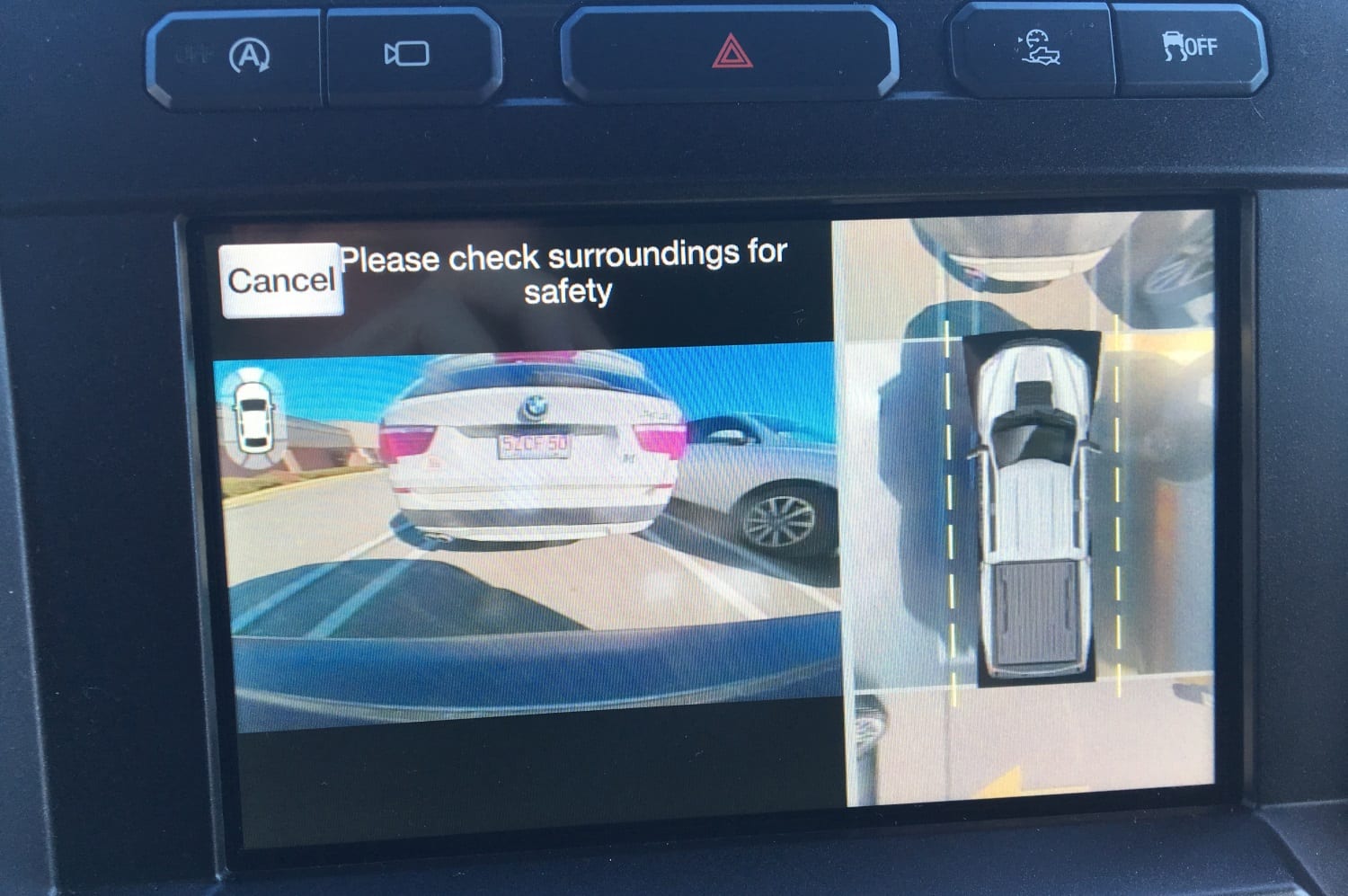 Despite its purpose, most Raptors will be never experience their intended destination and use. And that is perfectly fine if slightly sad. But the current state of our roads will sure as heck give the Raptor’s suspension and tires a workout. Having 450-horsepower on tap doesn’t hurt, either. On the open highway the Raptor is a smooth cruiser that can switch lanes like a sport sedan. Sometime ago I said that the Raptor would be the first vehicle I’d buy after winning a lottery. After living with this monster for a week I stand by that statement more than ever. It’s an absolutely amazing vehicle, even if you live in the big city.

[Disclaimer: Ford tossed us the keys to the Raptor and included a tank of fuel.] 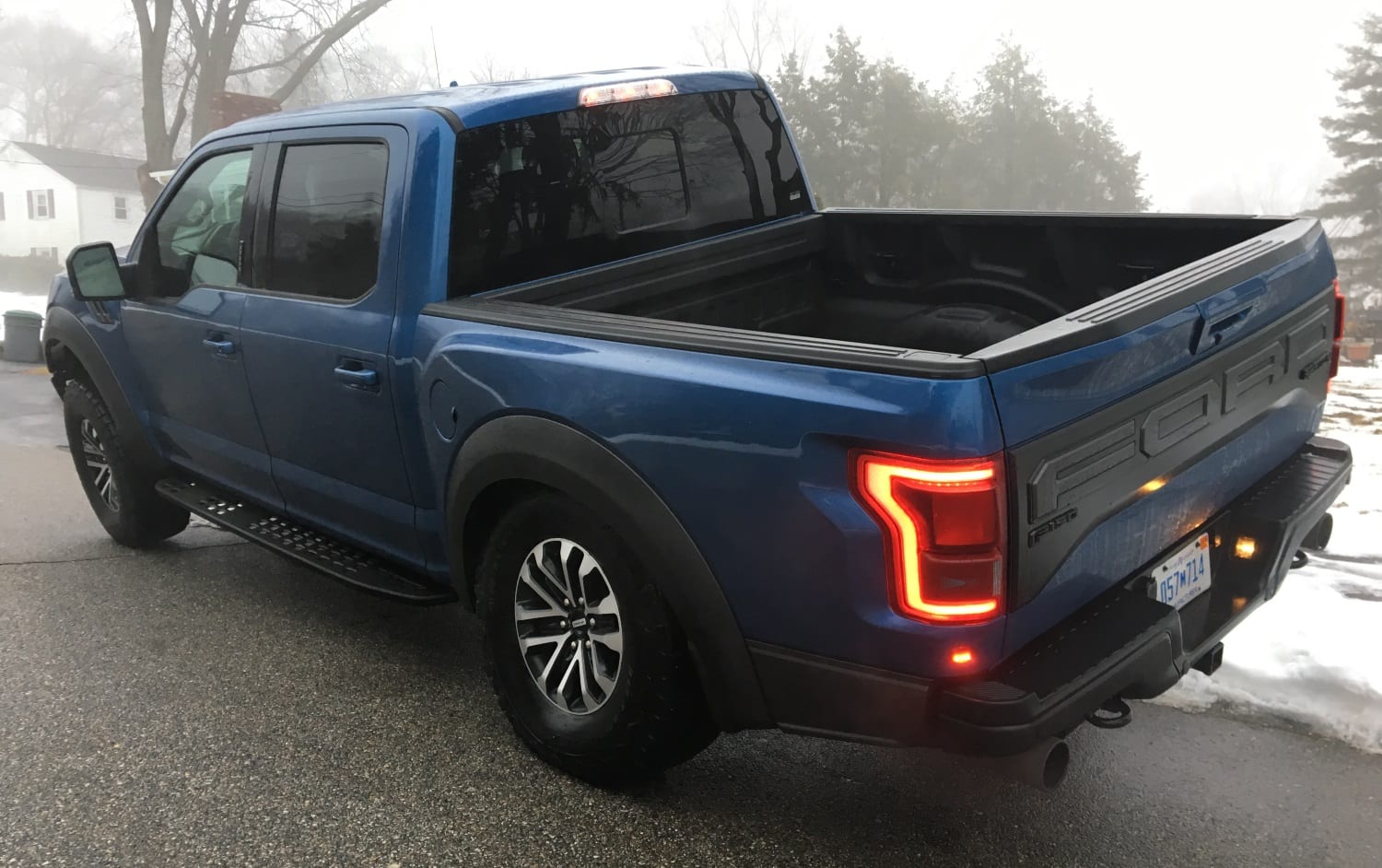