Assembly Bill 1824 went into effect in California at the beginning of 2019. The assembly bill, which contains updates pertaining to Election Code, Government Code, Military and Veterans Code, and an update to section 40610 of the vehicle code, has come under fire by those within and even outside of the enthusiast community. Nearly 150,000 of whom have signed a petition to nullify the fines. They are upset because this is no longer a correctible violation.

In a December 2018 press release from the California Highway Patrol:

“Certain vehicle exhaust violations no longer correctable (AB 1824, Committee on Budget): A fine will become mandatory, not correctable, when loud motor vehicles and motorcycles are cited. Previously, a driver or motorcyclist who was cited for modified or excessively loud exhaust or muffler systems could correct the violation to avoid a fine.”

Teacher Jeremy Lee is upset with the new protocol. He started a Change.org petition to nullify the fine. Some of these fines, by the way, may reach upwards of $1000. According to Lee, what the law describes is vague and misguided. 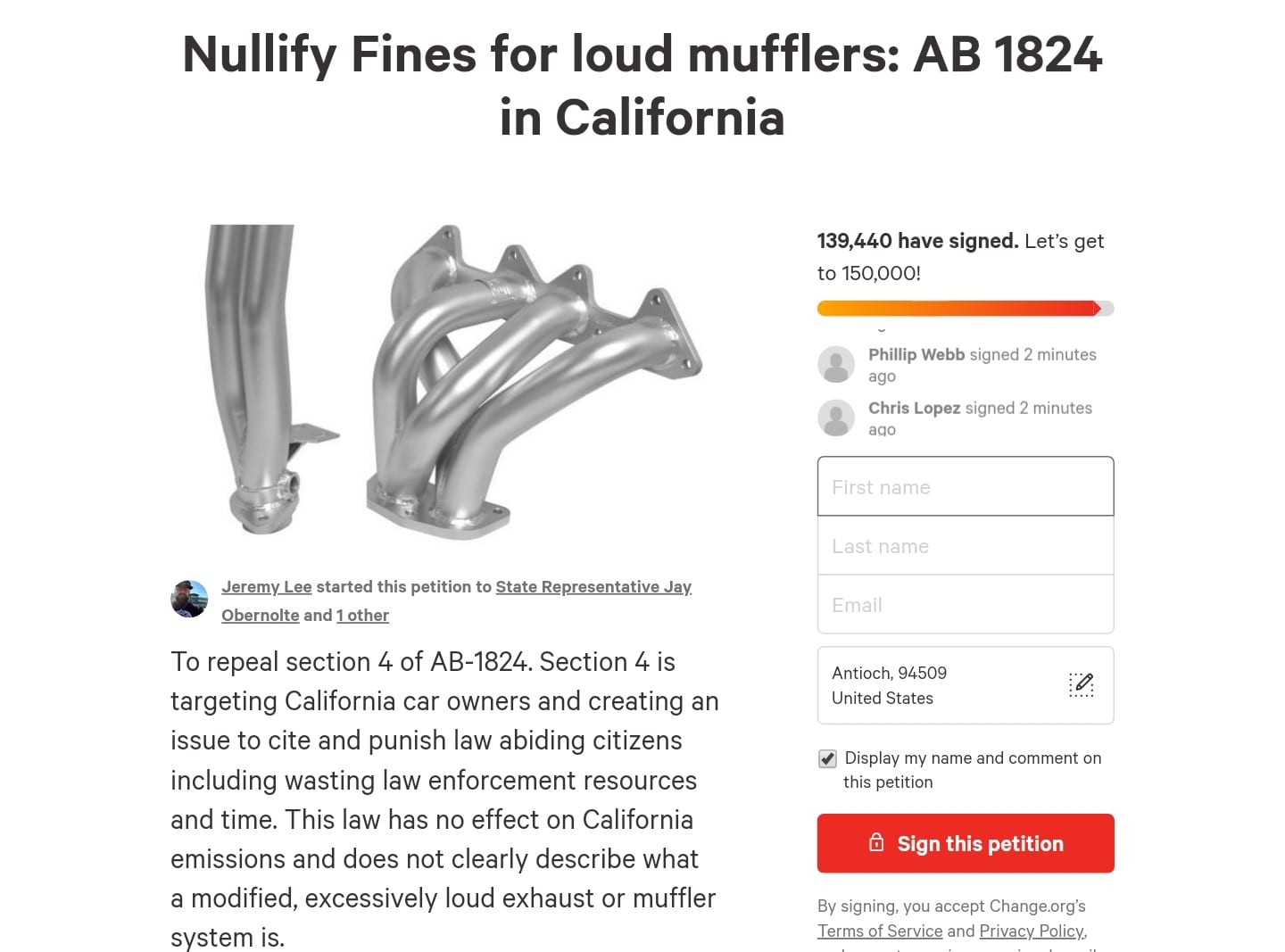 “Section 4 is targeting California car owners and creating an issue to cite and punish law abiding citizens including wasting law enforcement resources and time”, said Lee. “This law has no effect on California emissions and does not clearly describe what a modified, excessively loud exhaust or muffler system is”.

Who is the target here?

Others certainly seem to agree. As of mid-day on January 8, 2018, the petition gained 140,000 electronic signatures. This includes Pirelli World Challenge driver and California resident Mason Filippi. He believes the changes to the law do not properly reflect upon members of the car community.

“I think every automotive enthusiast can argue about how much a simple exhaust changes the feel of their car and what it is like to drive. A specific example would be people who drive at track days, a big part of a build is some sort of modified exhaust.” said Filippi. “I think that most of the car community has a great amount of respect for the people around them and we are just trying to enjoy our passion.”

Some think the changes to the law may be used as a way to profile certain groups of the community. Stephen Thompson is an automotive photographer and college student who often works in the exotic and tuner car space. He feels this subset is often seen as the more rowdy group compared to the often louder and smog-exempt traditional hot rodders.

“I do think it is an attack on automotive enthusiasts, because people modifying their exhaust does not contribute to unsafe driving, or lead to side shows. [California Legislators] are definitely misguided.” said Thompson.

Thompson, who agreed that there should be a decibel limit (which is currently set at 95) believes lawmakers are targeting sports cars and tuner cars.