One year ago today I flew to Chicago to buy my holy-grail dream car. Ownership didn’t exactly go as intended. I’m still trying to put the unfortunate turn of events out of my memory, but the car itself I will never be able to do so with.

My own experience aside, what is a 2012 Chevrolet Corvette Grand Sport like to drive? How has it aged, and how does its performance hold up? Is it as ferocious and capable as its styling suggests? Rather than relive the story of the C6GS experience that still haunts me, let’s take a more direct look at the car itself.

The C6’s exterior is a timeless design that still looks reasonably modern nearly 15 years after its release. It has aged well and will forever be instantly recognizable as a Corvette. In wide-body Grand Sport guise it makes for arguably the most proportionally sound iteration of the generation. Paired with the Centennial Edition (CE) package its demeanor becomes immediately known through its presence. Low, wide and aggressive, the C6GS checks all the boxes. It’s the kind of styling that makes you crave driving it even before opening the door. 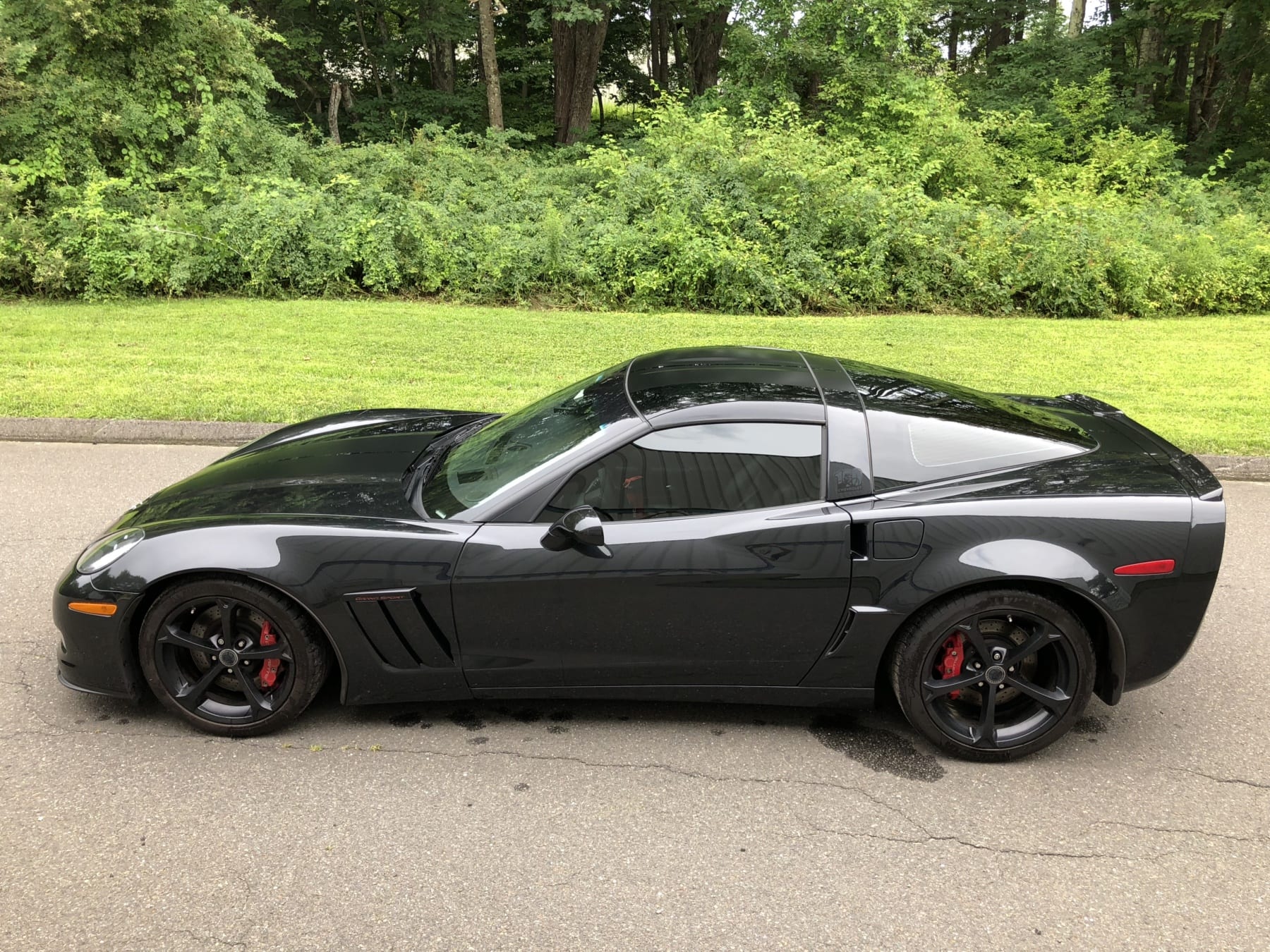 Unfortunately the interior undoes some of the exterior’s visual impact. It’s dated inside: old tech and budget GM plastics everywhere. The CE package adds large swaths of alcantara to the seats, steering wheel, shifter, and doors. It helps but doesn’t hide that the R&D money went to performance, not luxury. The interior is where cost-cutting is most evident in the Corvette. It makes the “performance bargain” descriptor very understandable. 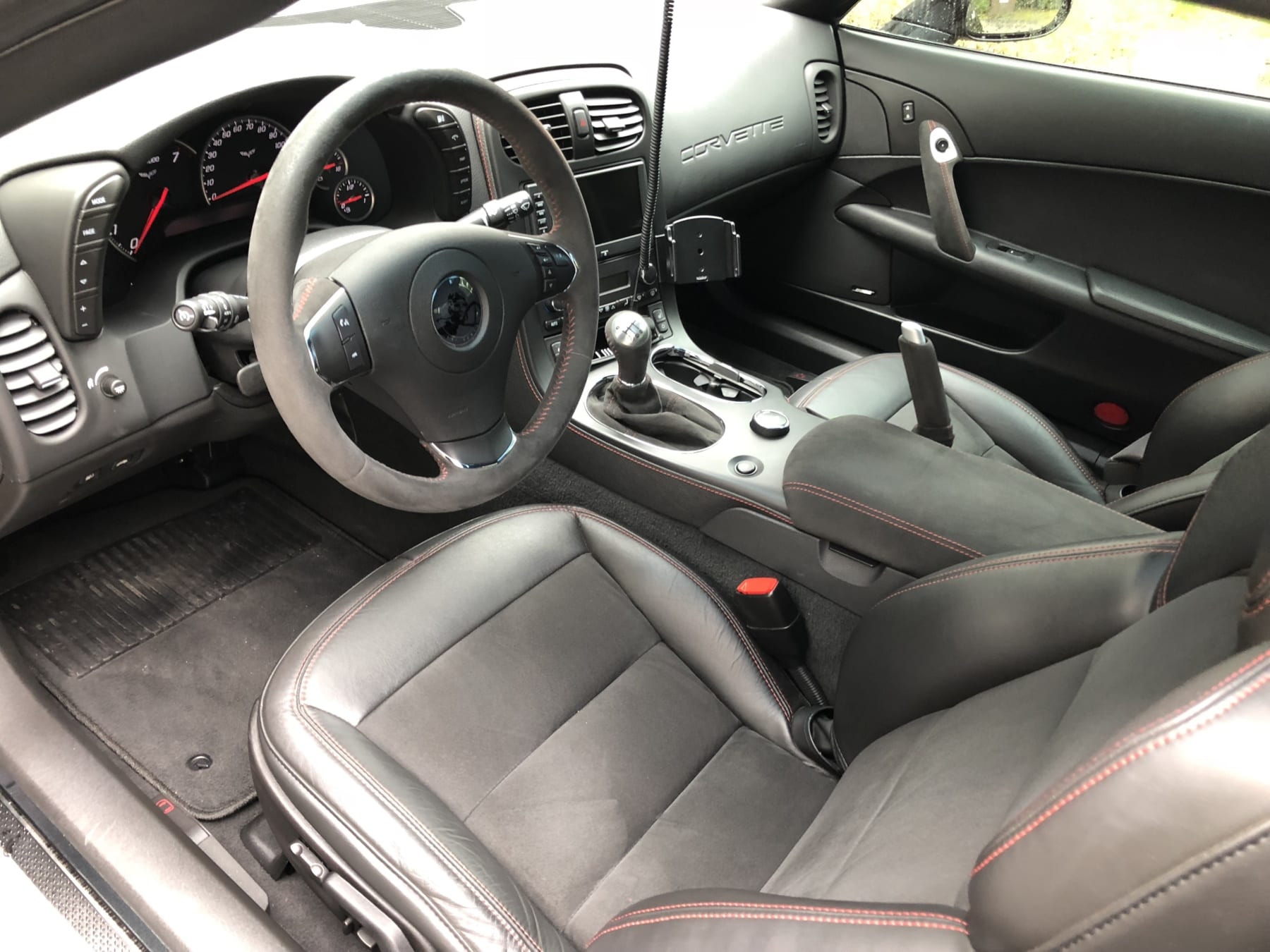 One notable feature is a touchscreen with navigation that seemingly runs on Windows 95. Across the dash the buttons and knobs of a quality that is borderline offensive for what this car cost new. Thankfully the seats are plenty grippy and supportive. They remain comfortable on longer drives and have ample adjustment for most any body type. Also present is Heads Up Display. I loved HUD when I had a Mazda6 for a week and I loved it on the ‘Vette. It projects vital information on the bottom of the windshield, allowing the driver to divert their eyes less than when looking down at the gauges. The resolution of the unit here is woefully outdated but HUD should be a mandatory safety feature on every production vehicle sold today. 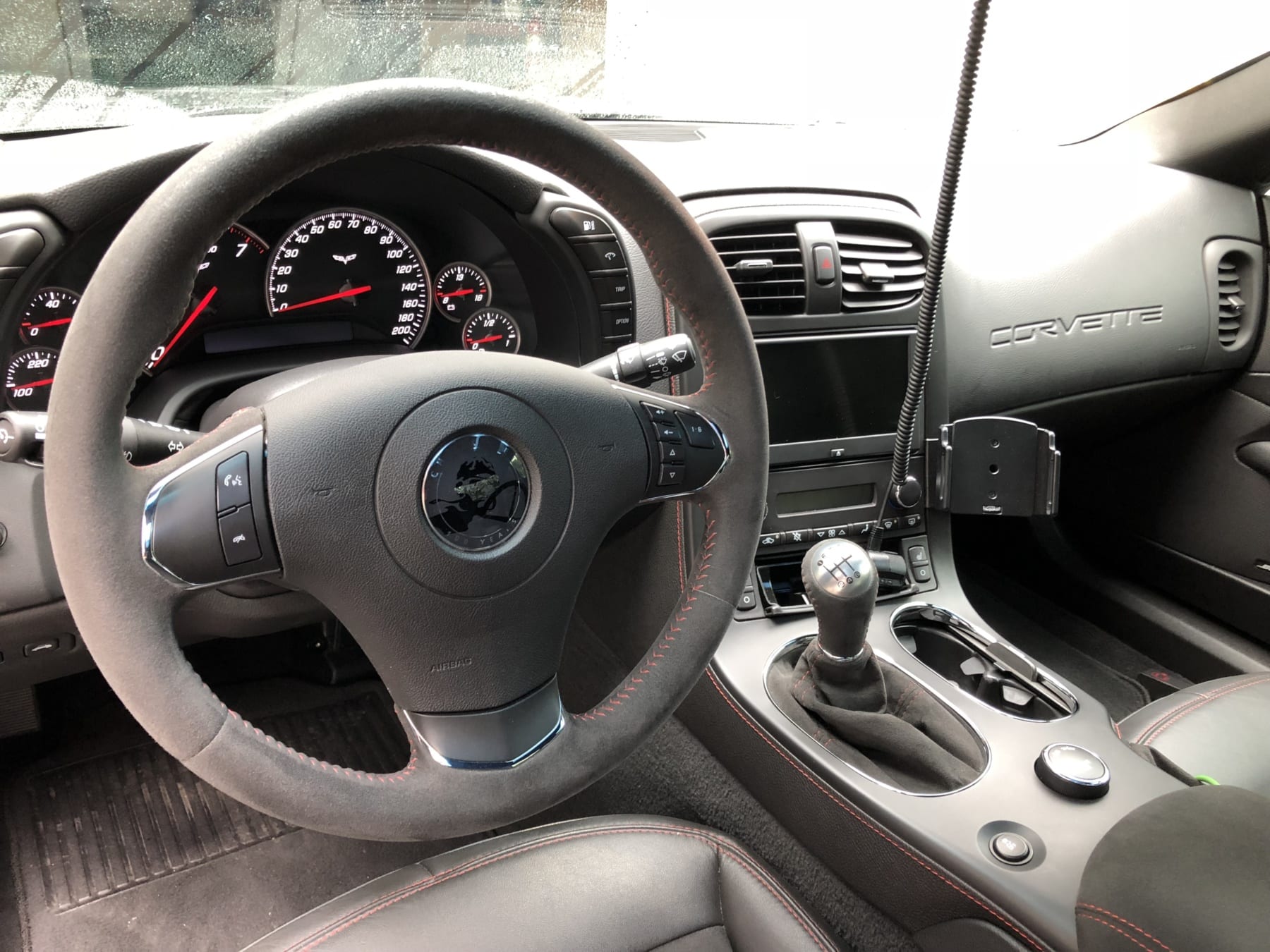 Another novelty that can be taken advantage of even before starting the car is the targa roof. Manually removing the center section opens up the cockpit to convertible-like amounts of airiness. And that’s without the drawbacks of a soft-top or the weight detriment of a power folding unit. By providing sky above when it’s wanted and full-on hard-top security when it’s need it the targa is a great stop-gap between a traditional coupe and a ragtop roadster.

The targa wasn’t available in the Z06 or ZR1 variants of the C6 thus making the C6GS this generation’s highest performing trim that allows for open-roof driving and isn’t the dedicated convertible. Do note that the targa section is best removed and reinstalled by two people. It’s manageable with only one person, but just. And don’t grab it without gloves on a hot day as it gets scorchingly hot and is extremely fragile. Extrapolate the potential results.

With the targa top affixed, the trunk area easily swallows a weekend’s worth of luggage if not more. Kudos goes to the hatchback itself. Contents on the carpeted surface get warm enough to melt chocolatey snacks but even with the roof stowed the car has ample space for its class. That’s especially so considering the level of performance it delivers. 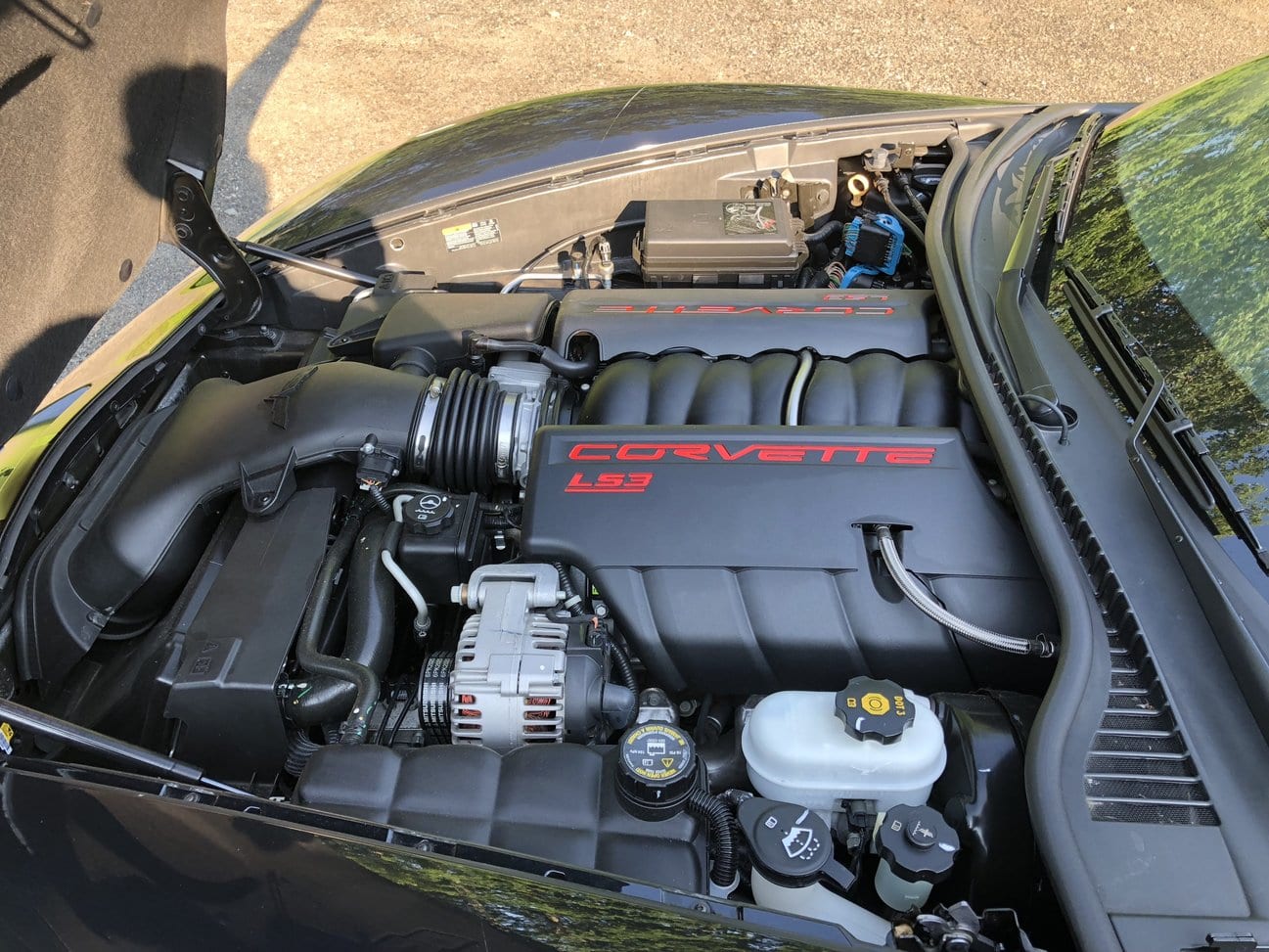 Speaking of, that’s what the Grand Sport is about: performance. In a straight line the dry-sump LS3 is satisfyingly strong. It’s not extreme to the caliber of what today’s internet deems normal but it’s still 430 horsepower and nearly the same torque. The multi-tiered traction control system, though antiquated compared to current tech, makes easy work of managing the power and the steamroller-like 325-section rear tires provide excellent traction. Acceleration in the first three gears is violent. At full throttle it’s not so much driving the car as it is pointing and hanging on. Every sensation is further exaggerated with the roof off, the exhaust’s bellow amplified as the wind rushes by overhead. It’s intoxicating. 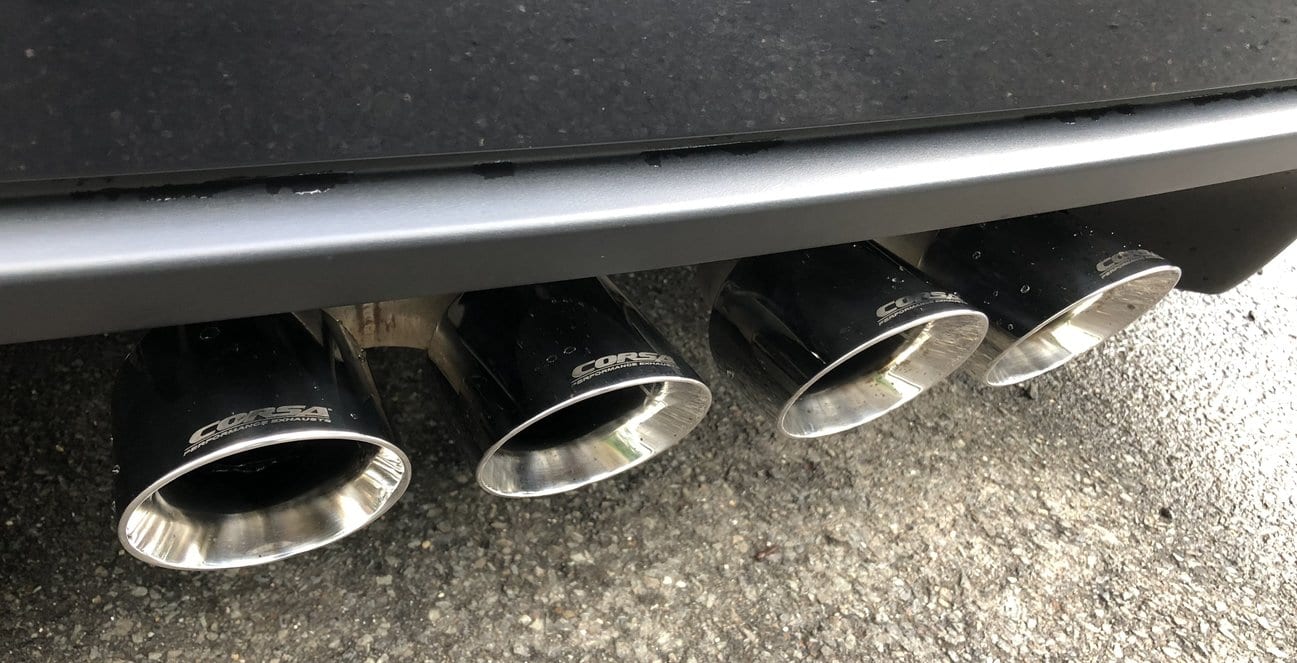 But the forward thrust isn’t much when compared to modern offerings. The handling, however, is still outstanding. Exploring the top third of the Grand Sport’s capability on the street simply cannot be done; the grip is absolutely phenomenal. Even with the side bolsters fully extended the seats don’t stand a chance of holding the driver in place when cornering with the vigor that the GS can manage.

Steering feel, too, is solid. The small dead spot on-center is only noticeable just before the front tires grab a section of road and tramline the car off its intended path. Under load the front end provides good feedback and equal steering weight. Every fragment of what’s happening isn’t transmitted but inputs result in the tires doing exactly what they’re told. 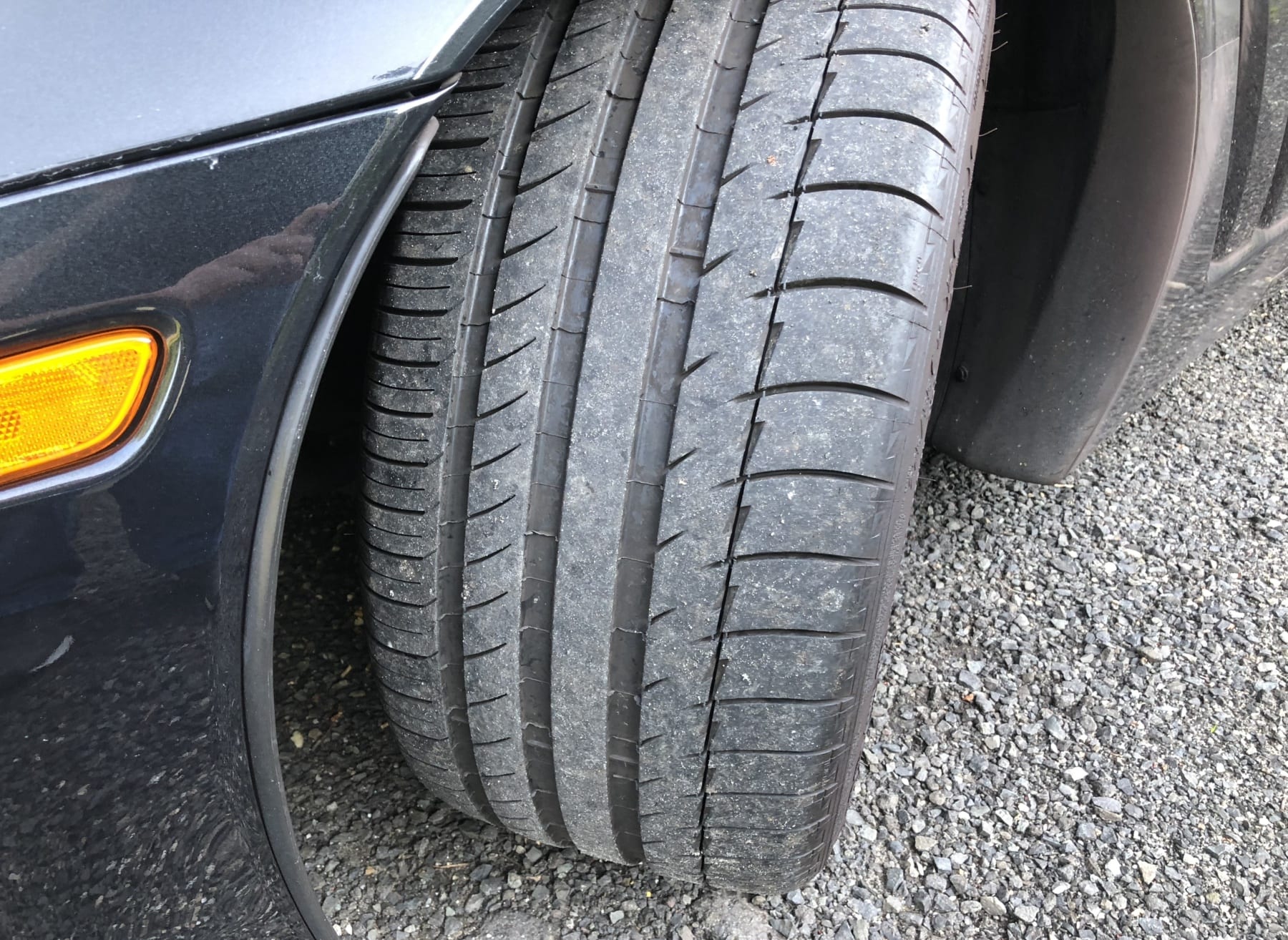 And then there’s a knob on the center tunnel labeled Selective Ride, now known as Magnetic Ride Control. It offers two options: Tour and Sport. Tour is plenty agile and reasonably compliant. Twisting the dial to Sport transforms the cornering from sublime to heroic. It changes the frequency at which the magnetic particles in the shocks move thus allowing for flatter cornering. It also causes hopping anytime the car traverses a bump, pothole, or uneven patch of road. On the streets of the Northeast the resulting ride quality is ruthlessly jarring. Impacts go straight into your teeth, bumps throw your head into the roof. It’s downright punishing. Sport mode is best used for race tracks, certainly not New England roads. 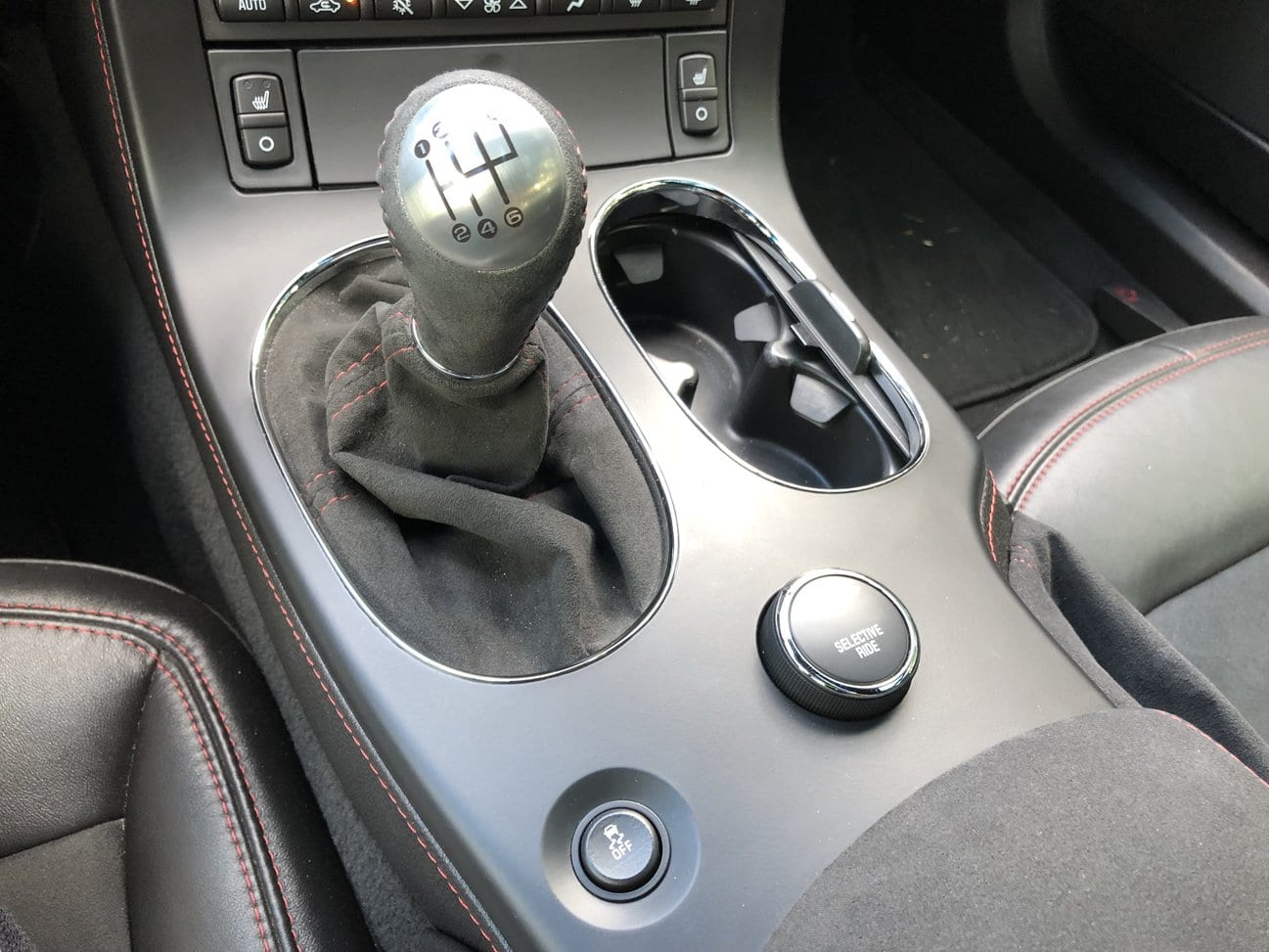 Obviously Sport mode need not apply for commuting where the GS is already a handful. This is both good and bad. Low, wide, and with extreme levels of performance, it acts like it in every way. Entrance and exit ramps become little race tracks and they vanish instantly. Corners that usually require braking can be taken without so much as downshifting. And in the Northeast where CUVs are so common they make a Dunkin Donuts sighting seem like a once-in-a-lifetime event, people everywhere stare at the car.

Is the C6GS daily-driver capable? It depends on individual tolerance for the inherent compromises that come with a car like this. But it also depends on location and commute length. Would I recommend it for high-mileage commuting? No. For rough New England roads? No. For prolonged stop-and-go traffic? (The clutch and inputs are all rather heavy) No. For the congested areas of the Northeast, it just doesn’t work. 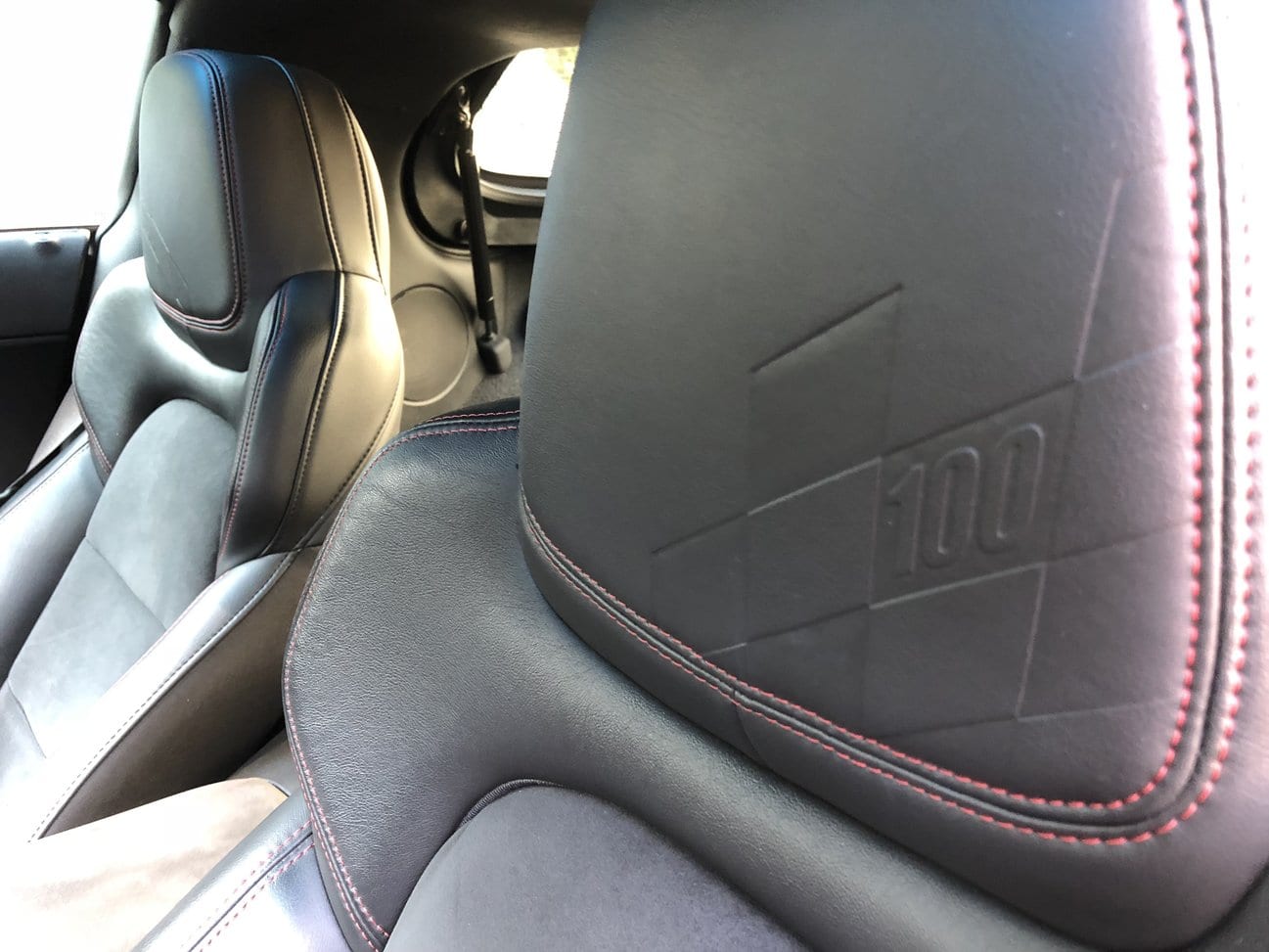 But in places like Texas or Florida the C6GS would absolutely thrive. California, too, if you can avoid the congestion. The Grand Sport is a machine that needs a life in which its limits can be explored frequently, in which it can be regularly be used for its intended purpose. If you have the lifestyle for it the Grand Sport is a hell of a rewarding vehicle to own. It limits are high enough that most any driver will find room to grow before needing to modify anything. If that point ever comes. Luckily mods are aplenty and the car is relatively simple. 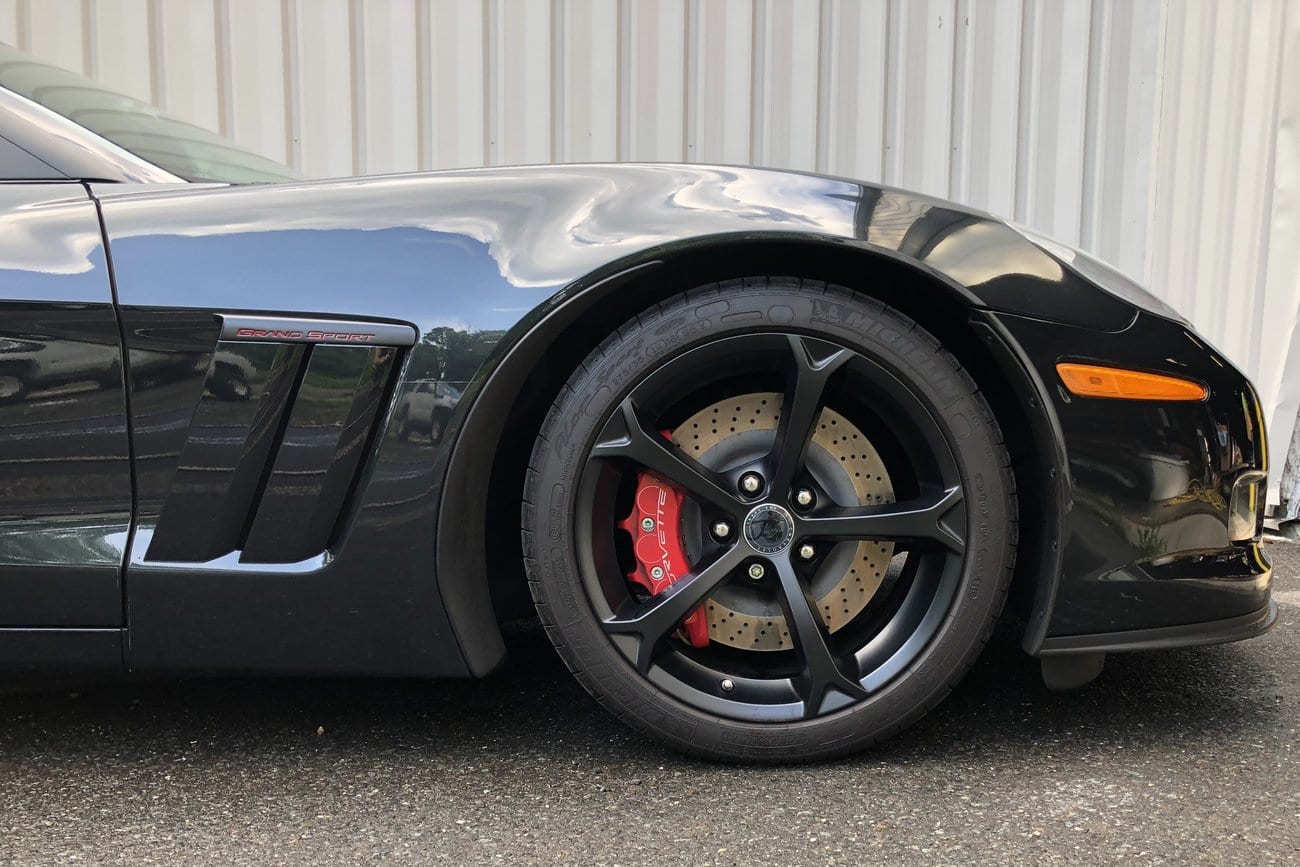 As a platform the C6 is durable, proven, and offers outstanding performance out of the box. In fact, the C6 Corvette Grand Sport is one of the absolute best performance values at any price. Even when new it was a beast of a car, out-handled by few. And for the price of entry on the used market its performance is hard to match short of a full-on race car or its Z06 big-brother. 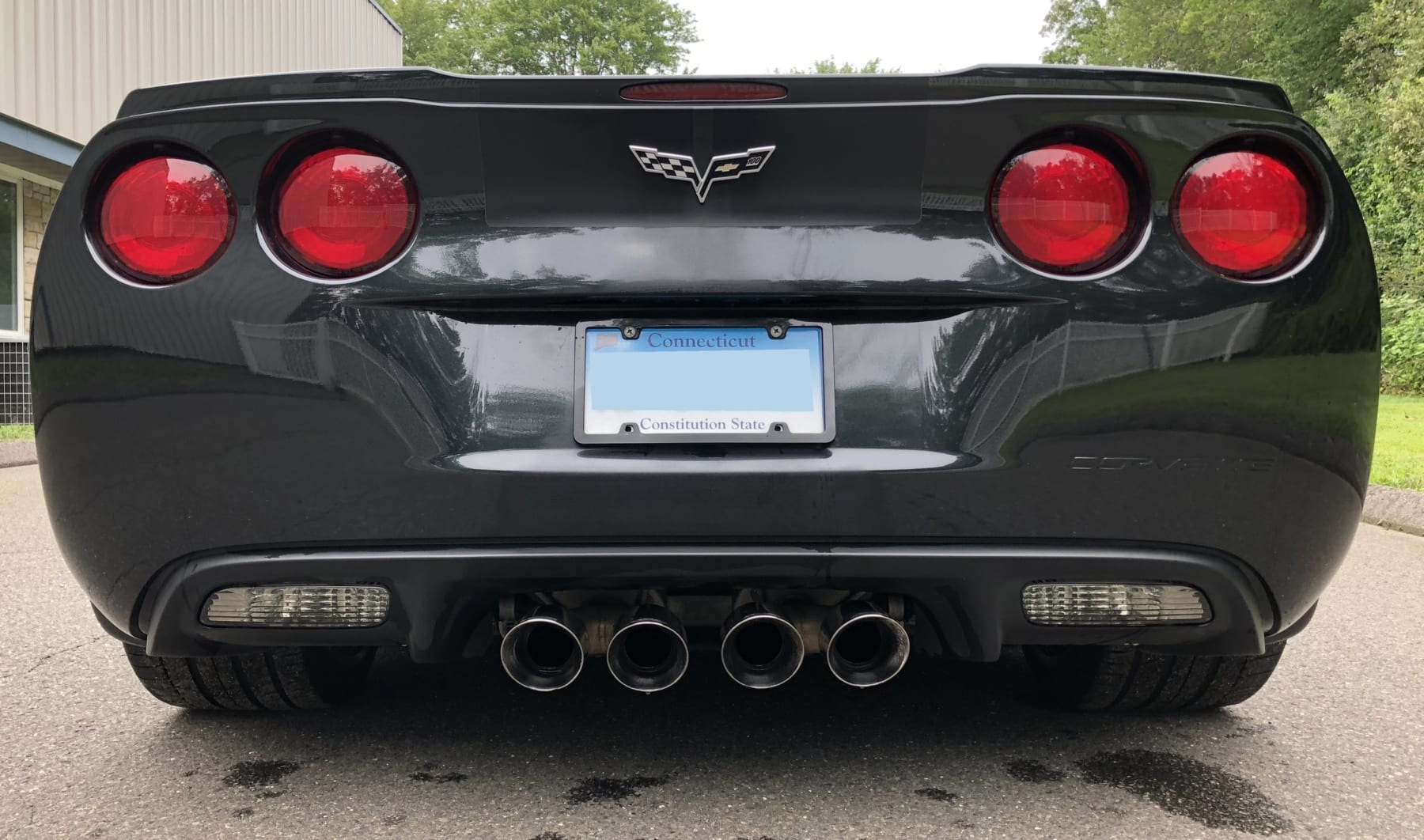 As for the Corvette community? Take this as a small anecdote but my time immersed in it left something to be desired. There seemed to be a lot of standoff-ish owners trying to prove that they’re “better than you” for whatever reason. A number of waves other ‘Vette drivers waved but a number also gave me glares at car shows for not having the newest, fastest, or most wildly modified model with a Corvette badge. Not that this matters; drive what you like.

In the end the C6 Corvette Grand Sport delivers on everything one would expect from it. Whether you know some basic things about it or just look on from afar there aren’t many surprises. The interior isn’t great, but you can’t expect it to be. The ride quality can be harsh and it’s tough to live with every day, but of course it is; looking at it indicates such to even the untrained eye. What makes the C6GS special is its all-around competence relative to its performance capability. It’s easy enough to drive like a normal car. It has moderate if not above average usability and practicality. And when given the right circumstances it corners, handles, and accelerates in a way very few other street machines can. The C6 Corvette Grand Sport is a monster on the street, a monster to live with, and a monster in every regard. I really wish I had been better suited to it because it truly is, still to this day, an amazing machine. 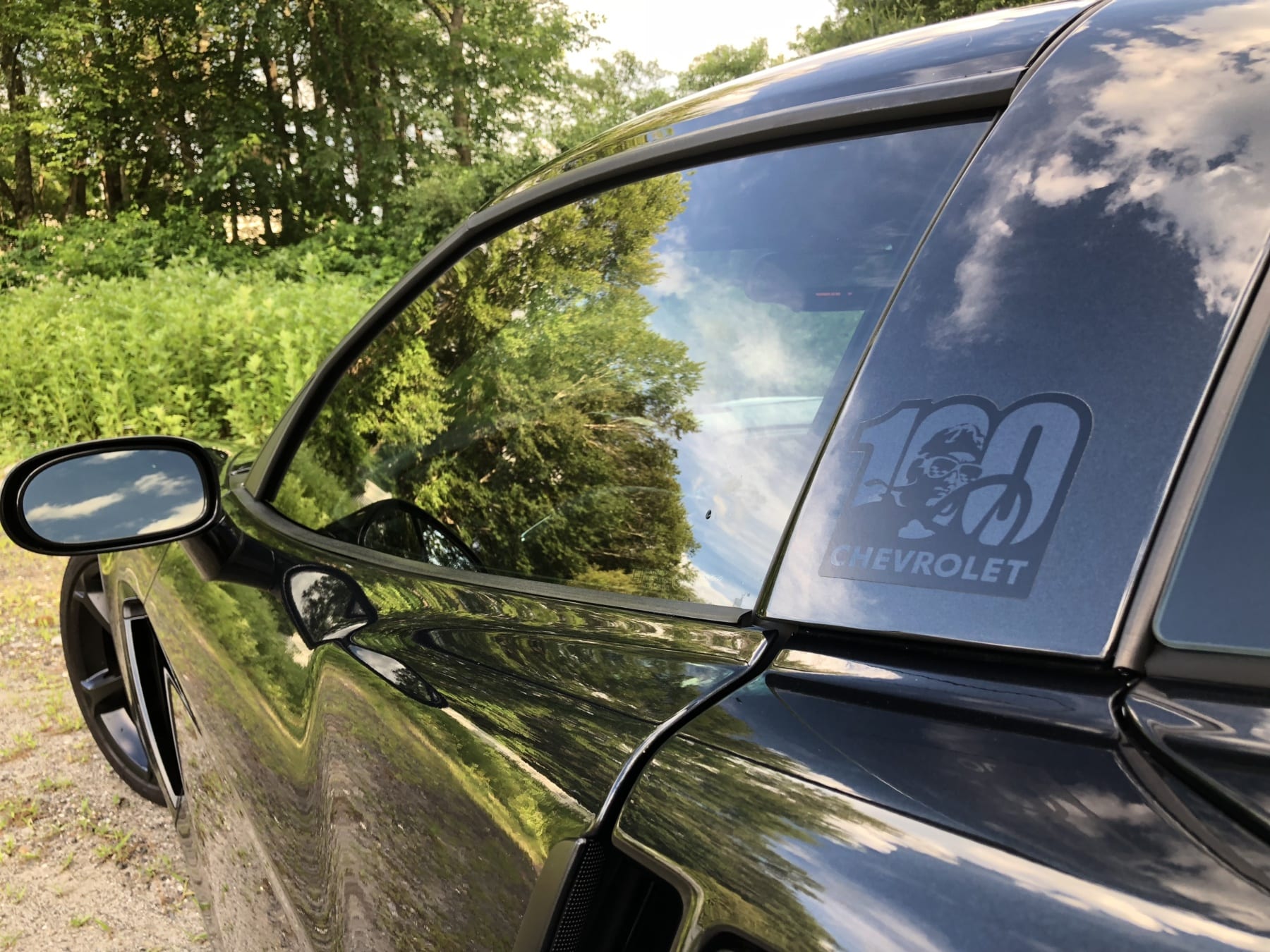