It’s tempting to floor it. Even more so than usual.

Every child-like instinct tells me to point the Mustang’s nose over the precipice of Union Street, romp on the gas, and let it fly.

If only this was a stunt car. Instead, it’s my daily driver, and I’m not chasing baddies in a sinister black Dodge Charger. I’m on vacation in the heart of San Francisco with my wife. This is our first time taking my stock 2001 Ford Mustang Bullitt to the city. Retracing the skid marks that Steve McQueen left on these streets 50 years ago. It’s a final adventure of many for our car before I put it on the market. 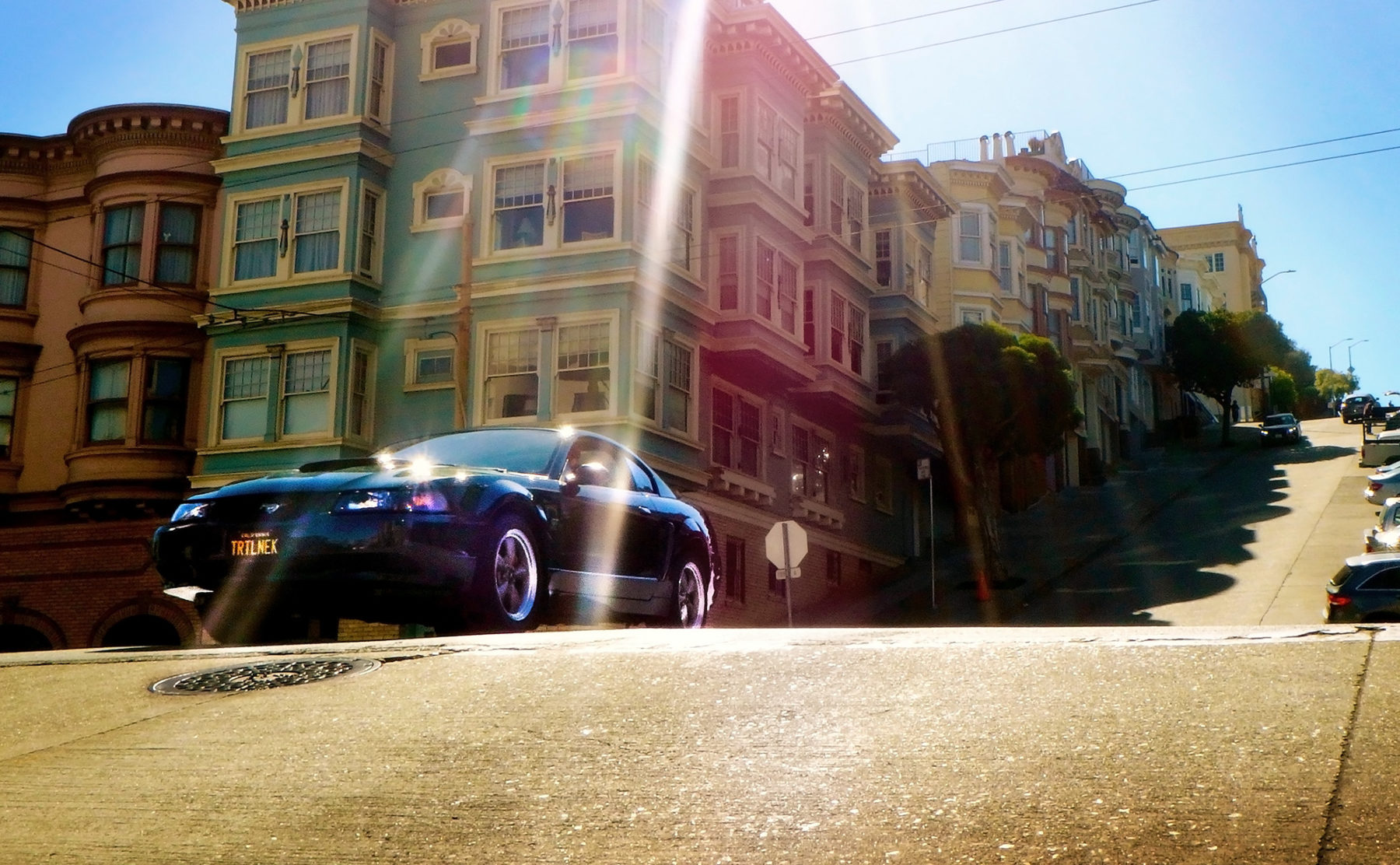 The image of McQueen’s 1968 car landing this very jump flashes into my mind. I see suspension crashing into the wheel wells, reportedly obliterating the oil pan and bending the flywheel in the process. So I’m satisfied to just get the wheels light as I crest the intersection, a stunning glimpse upward at the San Francisco bay and Alcatraz, before the car plunges back down Taylor Street.

Ever since I was a kid, I’ve been a fan of Bullitt’s game-changing car chase. It’s a sequence I’ve seen hundreds of times. After Bullitt, every cop flick had to have a vehicular pursuit. Other chases have since equaled the Bullit chase (1998’s Ronin has a few). But none will ever come close in terms of pure attitude. Simply put, Bullitt has the coolest cars, the coolest city, the coolest time period, and the coolest actor behind the wheel. 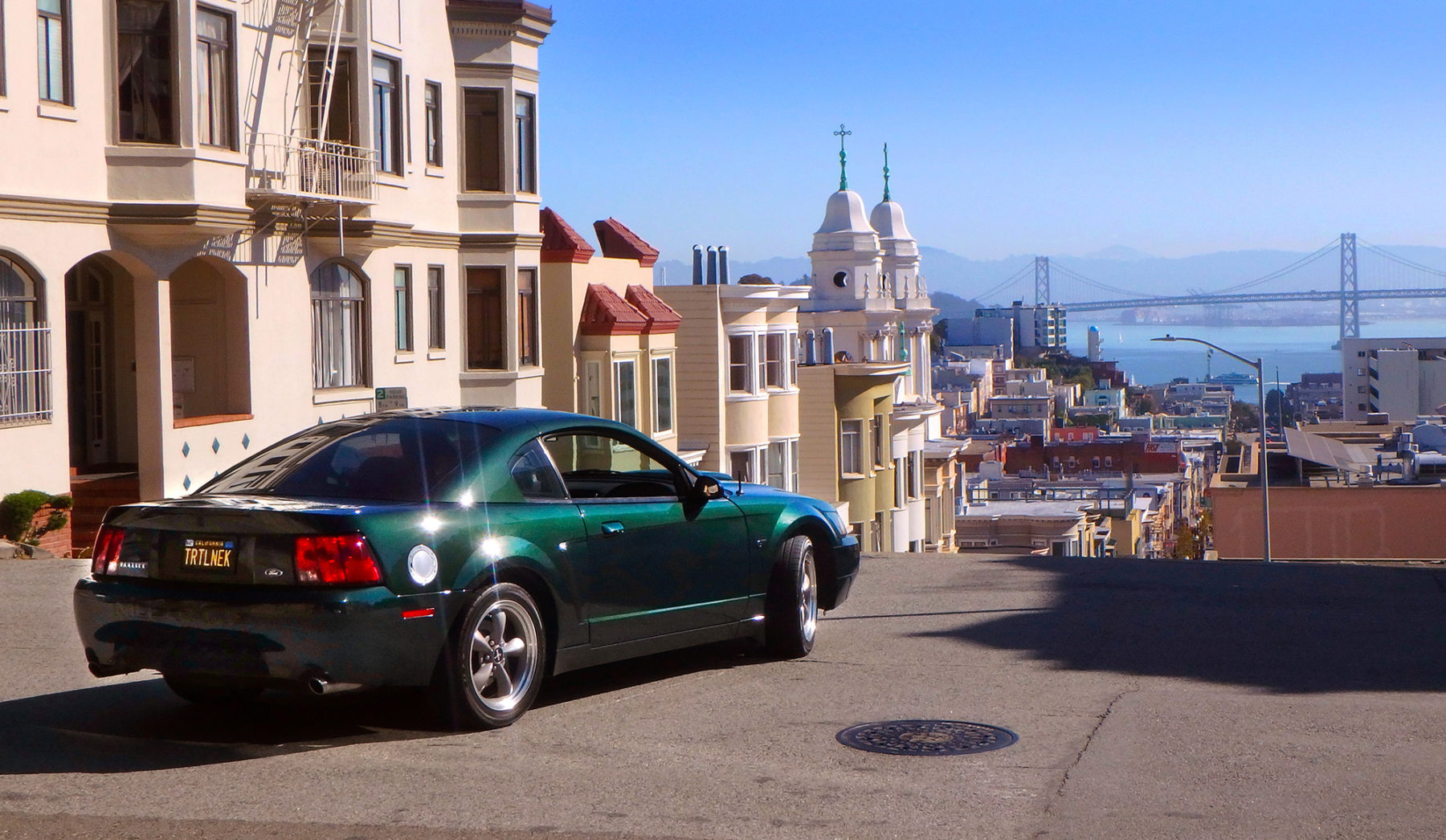 A tiny bit of that cool factor hits me, right in the inner-child, every time I get behind the wheel of my own car. I always wanted a Bullitt Mustang, but solid 1968 replicas were well out of my price range. At the time of my purchase, the new 2019 Bullitts weren’t even announced yet, and at around $50k to $70k with dealer mark-ups, would’ve been well out of reach anyways to someone who hates going into debt to pay for my wheels. And even though the 2008/2009 Bullitt edition looks closer to the McQueen car, I found myself drawn to the simplicity and the boldness of the 2001 model, Ford’s first official Bullitt tribute that spawned the later two versions. 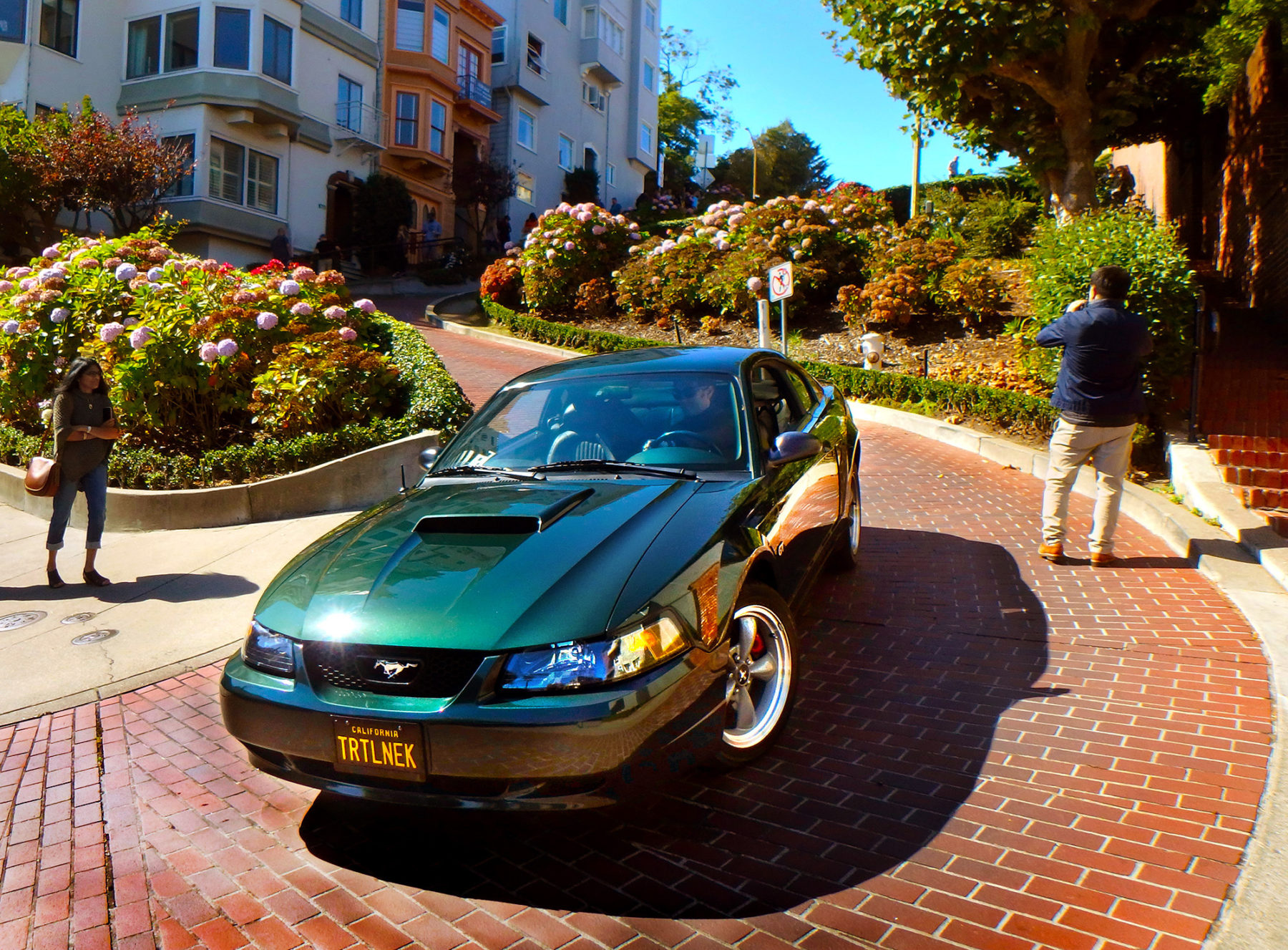 I’ve always admired how much thought and care Ford put into this car, especially for the price point. The Bullitt package was a mere $3,500 upgrade over the regular GT, which slotted the Bullitt neatly between the GT and the top-of-the-line Cobra. For that price, Ford could’ve just painted it Dark Highland Green and slapped some badging on it, and nostalgic boomers would’ve still snapped them all up.

But Ford did much more than that, with hundreds of modifications inside and out. From the retro buckets seat stitching to the old-school font on the gauges, to the solid aluminum shift knob and the throaty exhaust tuned from the movie’s soundtrack, they put in the effort to make the 2001 Bullitt look, drive, and feel special. 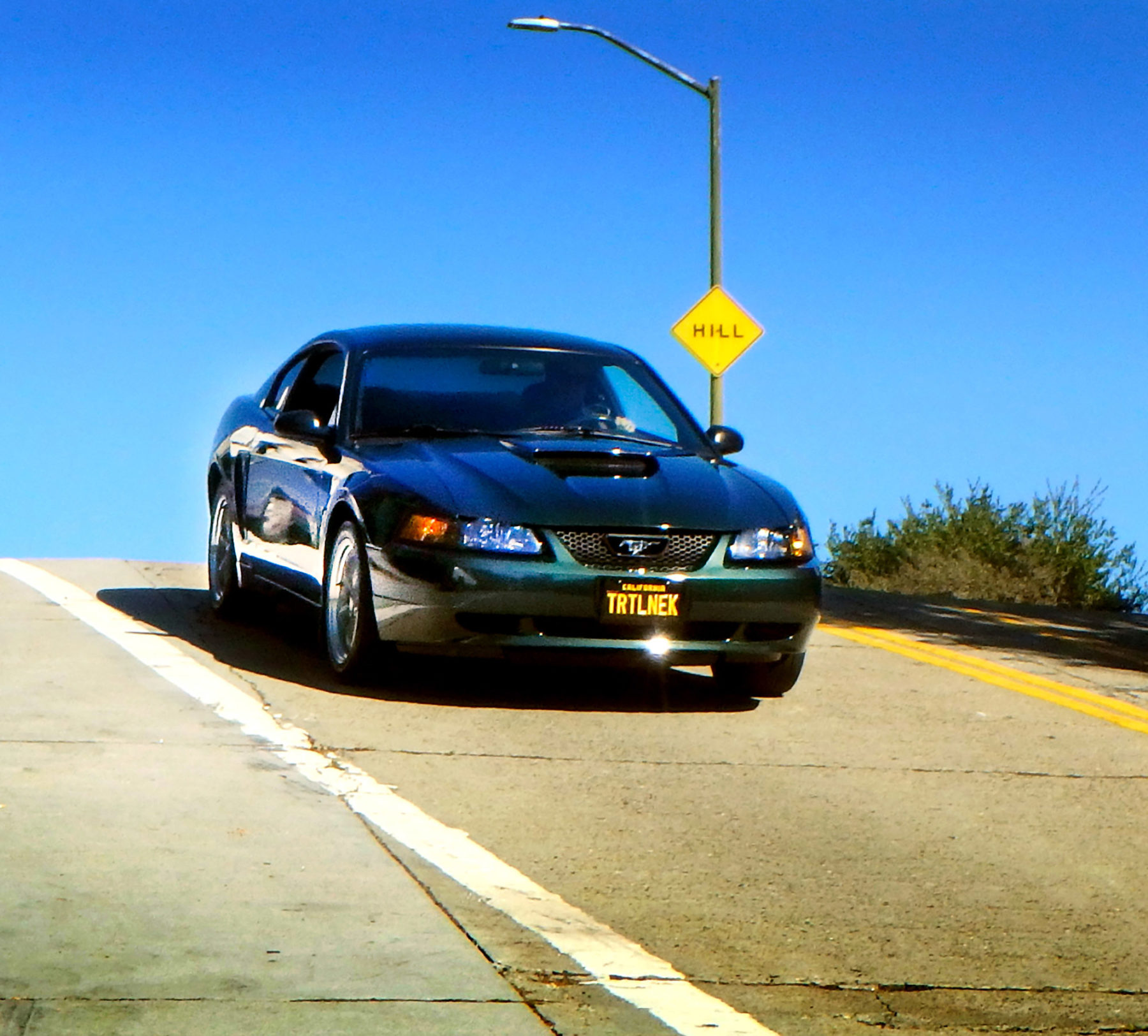 Ford had no problem selling those first 5,500 cars. And even though that wasn’t a huge number, it sparked the trend of overtly retro styling that all muscle cars followed throughout the next decade.
The movie Bullitt was filmed entirely on location in San Francisco, which means just about every location can still be seen today. These locations have changed remarkably little in five decades.
The night club that marks the start of the chase itself, Bimbo’s 365, is still up and running. It’s here that the baddies in the Dodge Charger finally buckle up and peel out, taking a left up Chestnut street, leaving Frank Bullitt mired in traffic before he can pursue. 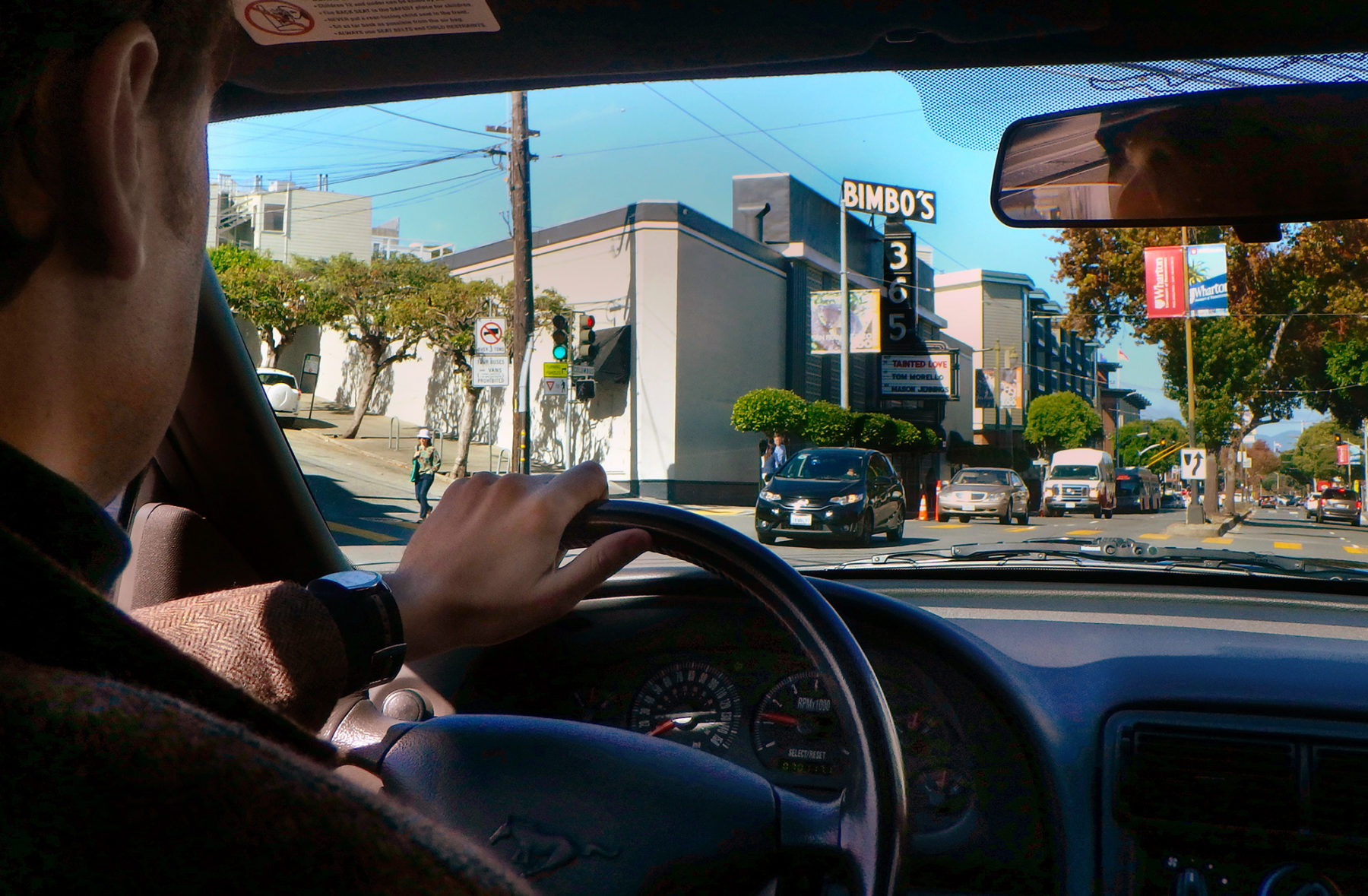 Once I turn up the same street, I realize that a good old American V8 is the ideal engine for shooting up the steep hills of the city. The instant gratification of plentiful low-end torque chugs against gravity’s strain, rocketing the Mustang up the incline. The wonderful sounds bouncing off the close confines of the buildings are just a bonus. 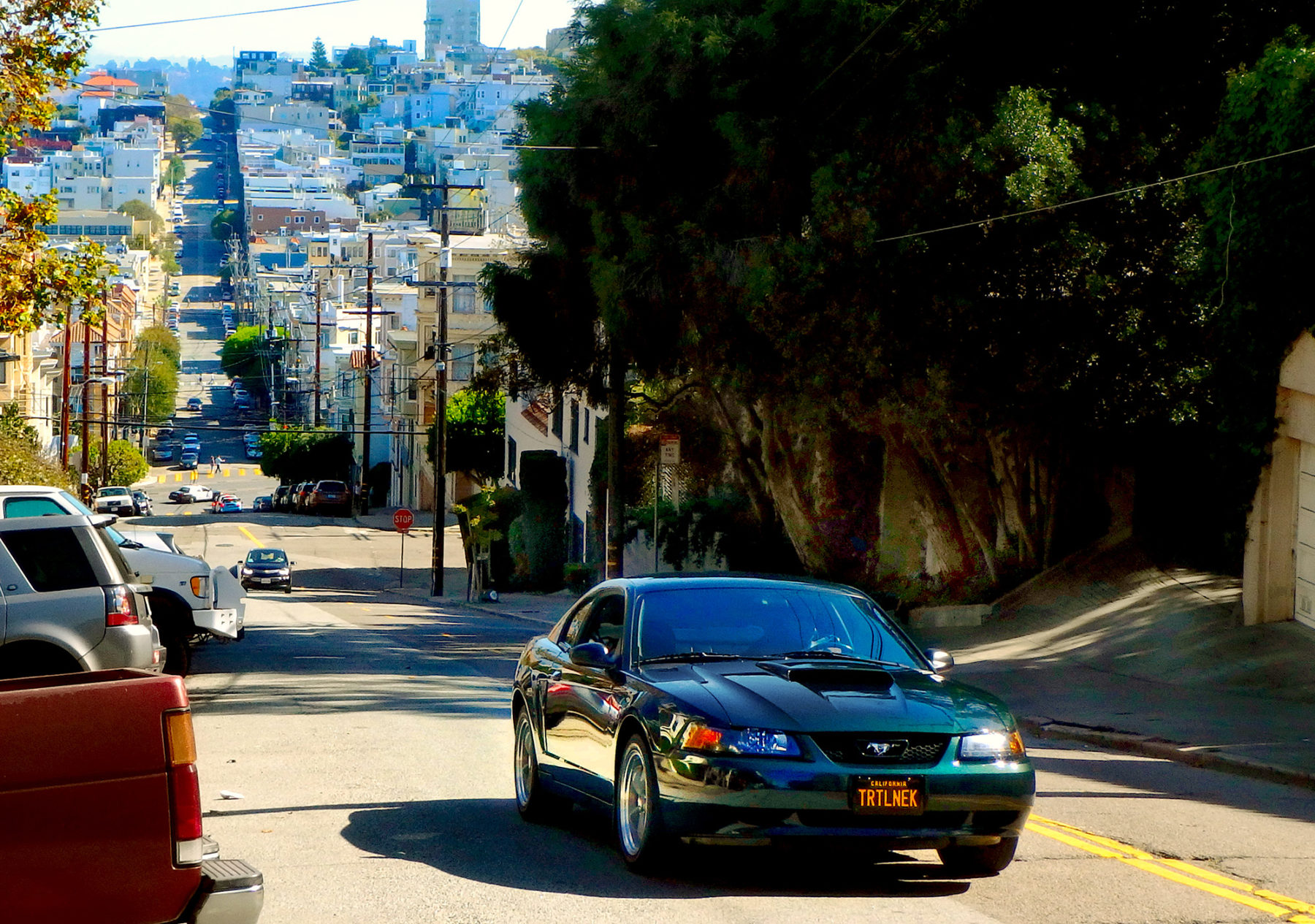 Filmmakers will tell you that the hardest thing to capture well on celluloid are steep inclines. And even though I think director Peter Yates did a stellar job of filming the stunning rises and drops in Bullitt’s car chase, they still can’t compare to actually driving the breathtaking locations in person. The inclines are get up to 30 degrees, and impossibly narrow.

Even at sane speeds, cresting a steep hilltop is a leap of faith. For a few seconds, I see nothing but sky and hood scoop, and I say a silent prayer that no unseen person, animal, or vehicle has darted into my path as I move forward.

My wife and I love visiting movie locations, mostly because you feel a certain closeness to a piece of your favorite piece of cinema afterwards. In a way, you were there. But after getting a true sense of how harrowing it must be to drive at 100 mph on these in cars that weren’t exactly known for their cornering skills, I walk away with something else. I have a new-found respect for McQueen and his daring team of stunt drivers. 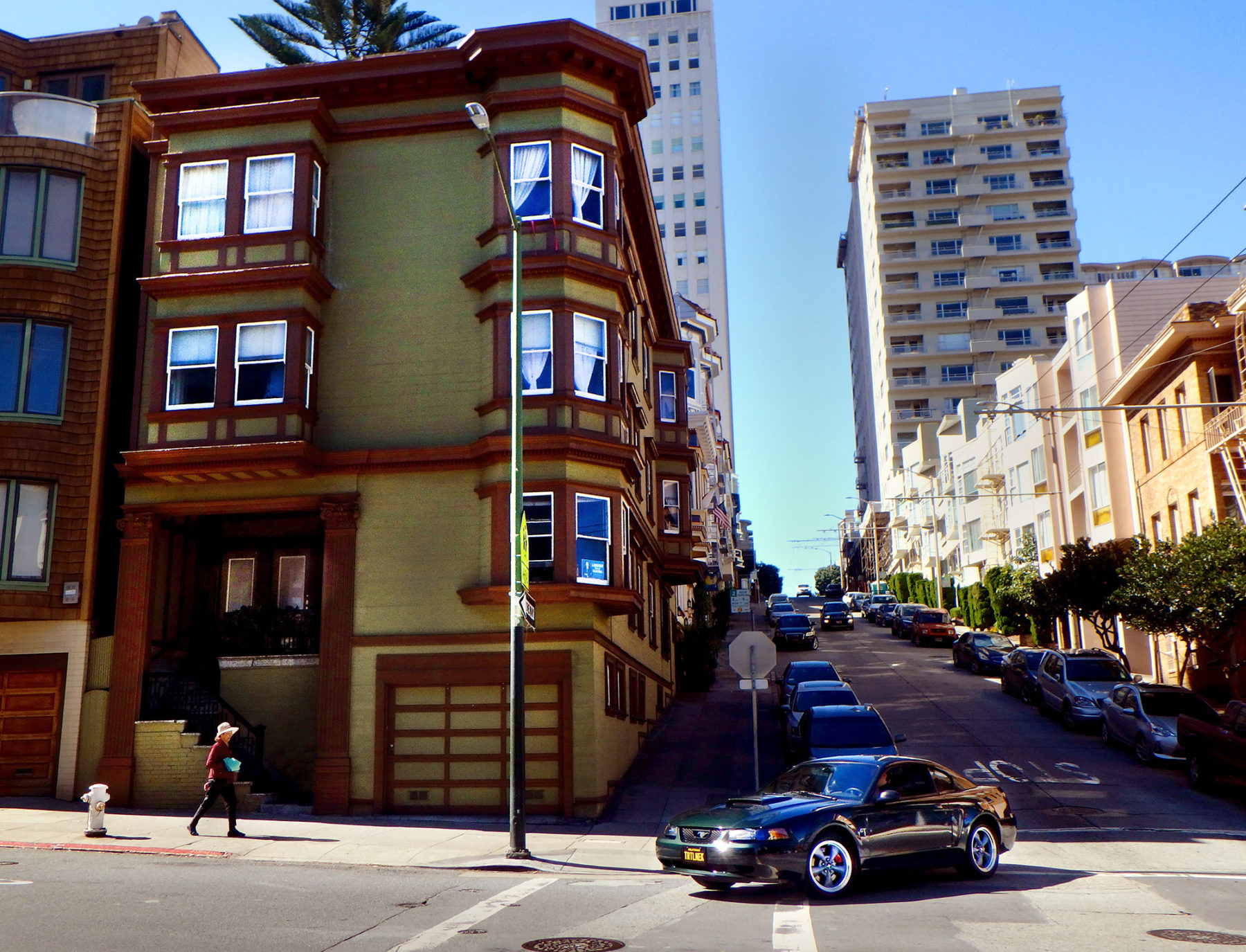 Our tour takes us to the intersection of Taylor and Clay, where Bullitt’s apartment still stands. A garage has been added onto it, and it’s been repainted from blue to green, but it’s still essentially the same as it was when it was built in 1906. In the film, McQueen’s complete mastery of vehicles is evident in even the simplest of maneuvers. When he parallel parks his Mustang in front of his apartment, even backing into an uphill angle, it’s a single movement of grace.

My Mustang is nowhere near as beastly as McQueen’s, but one thing they have in common is firm clutches. Neither car was built with such luxuries as hydraulically-assisted clutch pedals, so the only thing disengaging the transmission from the wooly V8 is a cable pushed with your left leg. The feeling of clutch take-up is raw and unfiltered, but up and down the hills, and piloting back and forth into the tight inclined parking spaces, I’m getting a proper workout. Every day is leg day with an older Mustang in San Francisco. 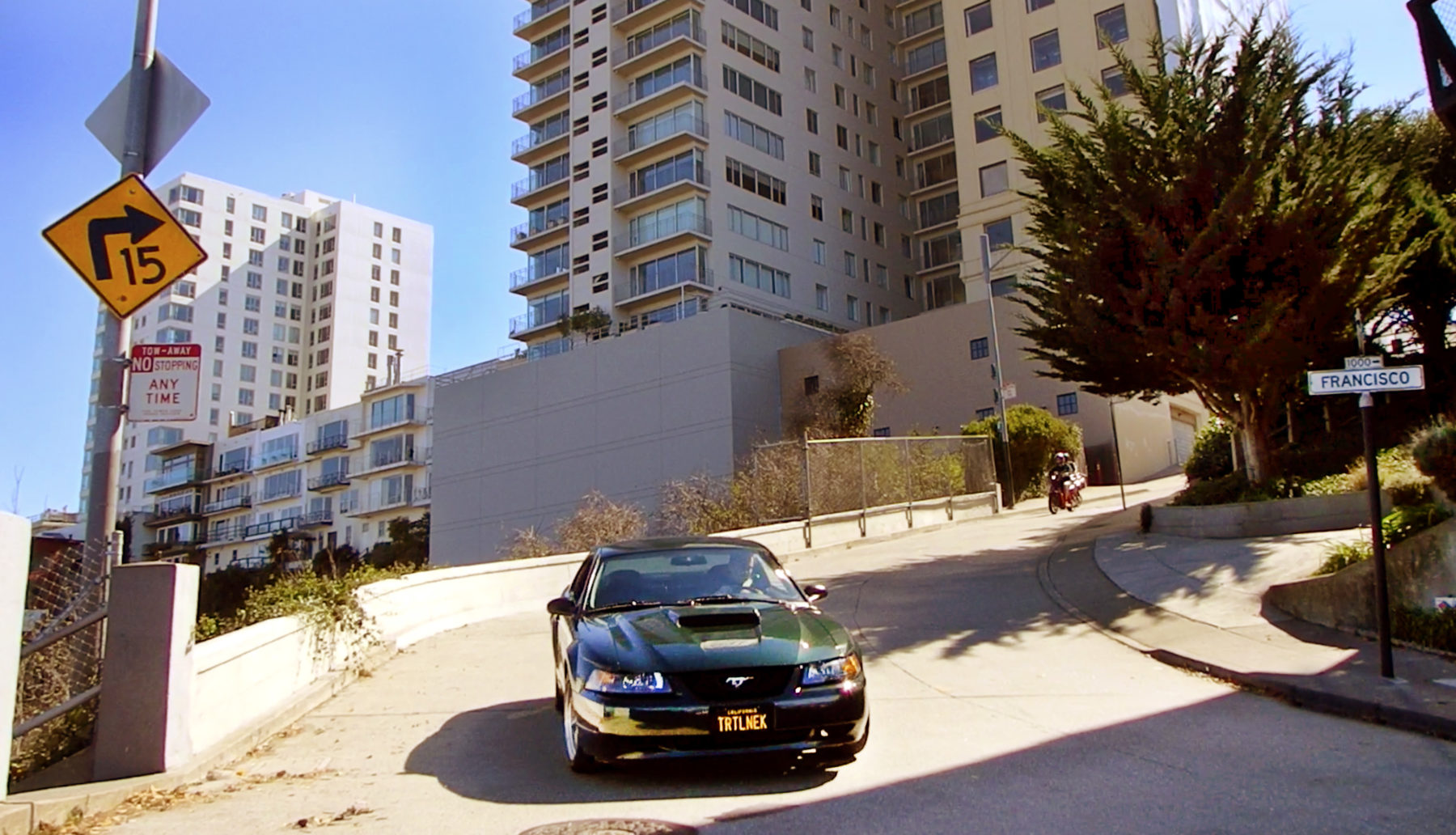 Despite that, my 2001 model makes a surprisingly competent urban commuter. This was one of the last gasps of the Fox/SN-95 platform that underpinned the Mustang from 1979 all the way to 2004. Since then, Mustangs have gotten faster, smoother, and more refined. But they’ve also gotten bigger, heavier, lower to the ground, and harder see out of. All things that make the tight spaces of city traffic a challenge. Sometimes being able to see and fit where you want to go makes you faster than an extra hundred horsepower.

Even though traffic is thick, finding parking is surprisingly easy, thanks to my trusty navigator (my wife, her smartphone, and her parking apps). On our last day, we park for coffee, and I notice a self-driving test car creep by. It’s one of the many autonomous electric Chevrolet Bolts I’ve seen crawling around the city. As numerous and slow as the green VW Beetles that re-appear throughout Bullitt’s chase sequence. 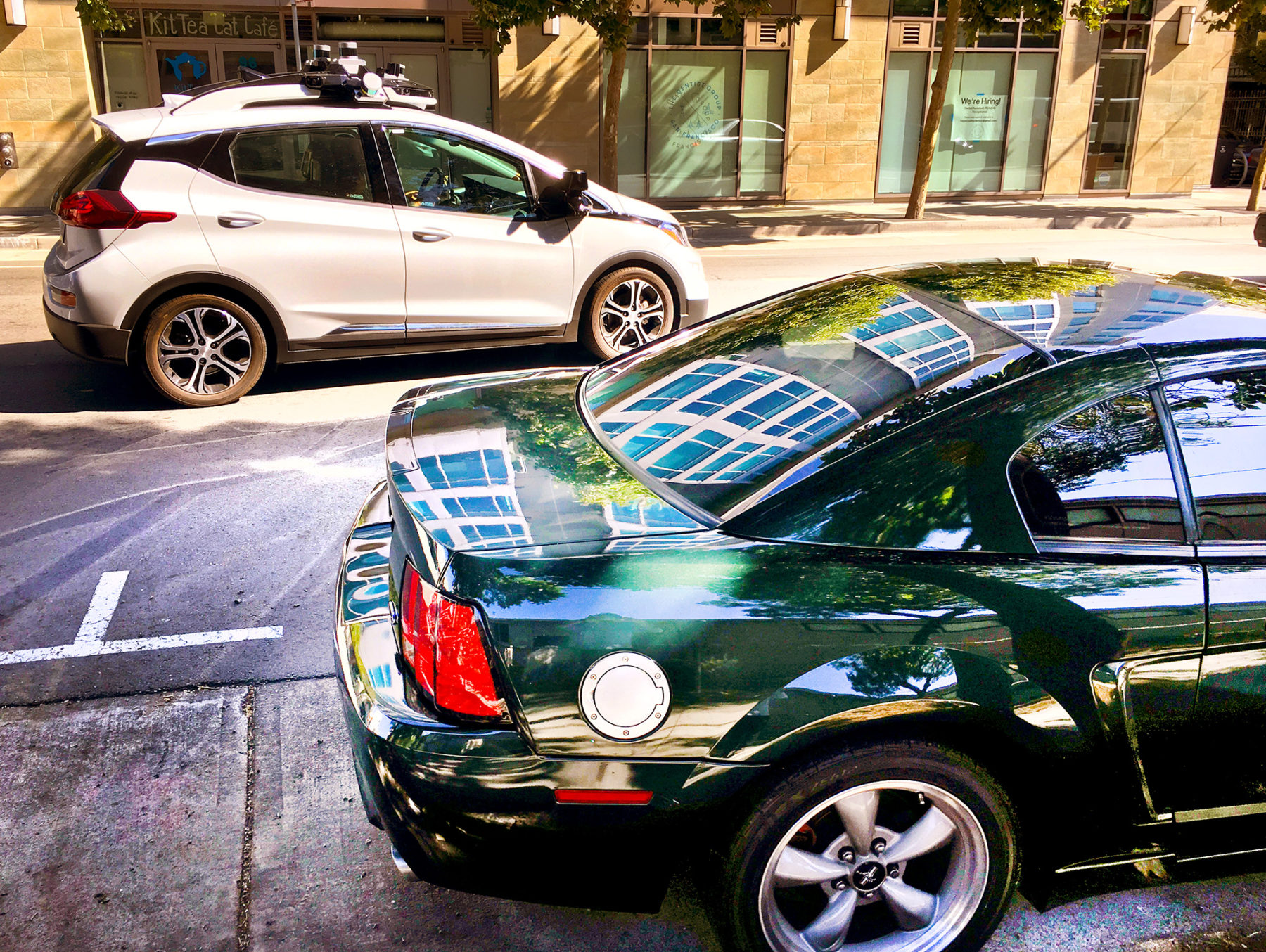 The Bolt driver, his hover-hands over the steering wheel, nervously watching as the onboard computers guides his science experiment past our Bullitt. After a few seconds of cogitations, the Bolt whines safely by. I realize I’m seeing the future gliding forward from the past. It won’t be long now until the sound of a V8 echoing off the hills of Taylor street will be as antiquated as film stock and celluloid.

After coffee, we slide back into the black leather seats of the Bullitt. I fire up the V8. The car pulses to life, ready and willing for the drive back home. The future can wait, just a little bit longer. The past can still have its day. 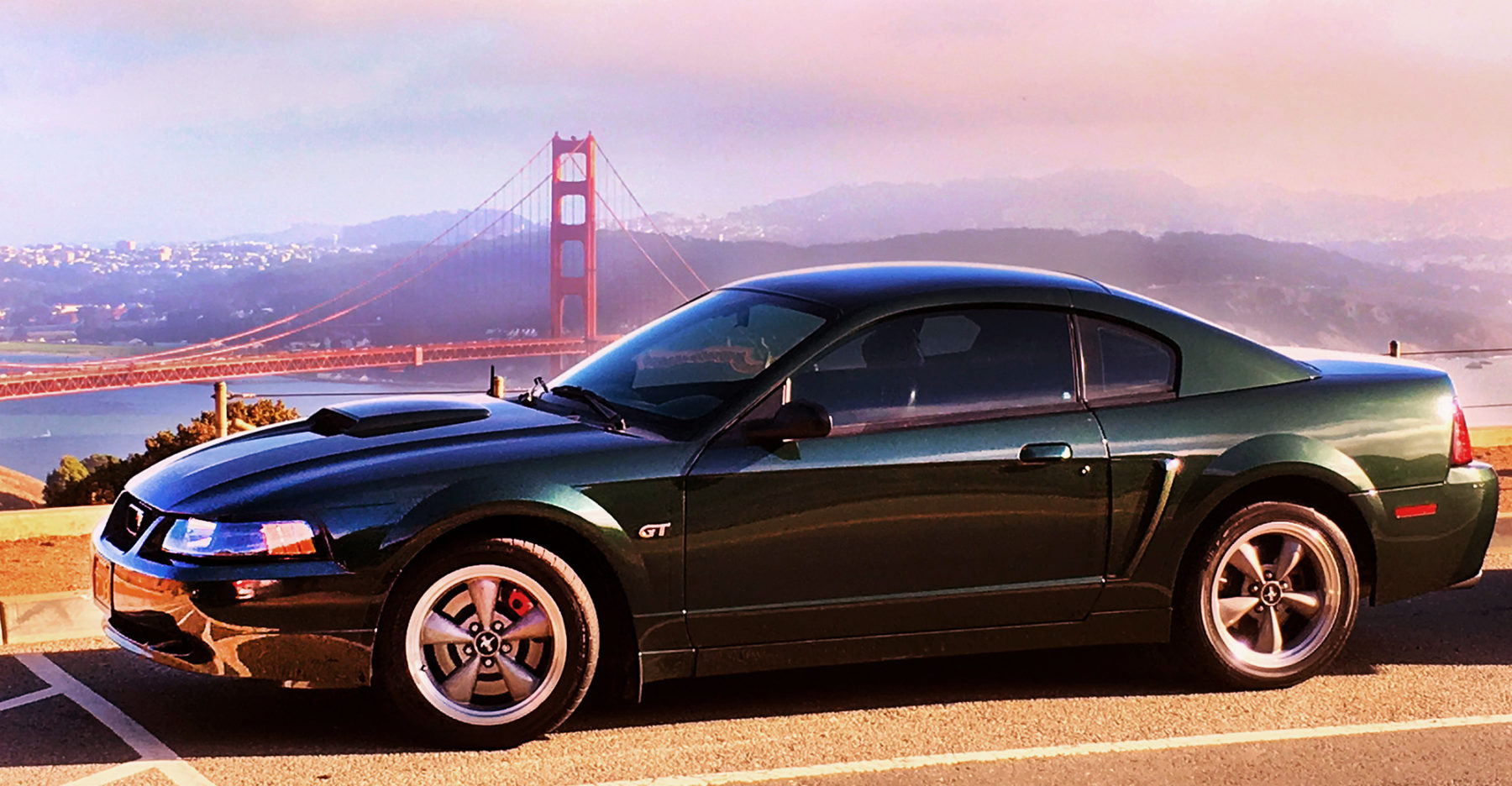