March 21st, 2020: The kids are restless. They’d just completed their first week of state-enforced homeschooling and were not looking forward to what was then projected to be 2 more weeks. My wife had similarly spent her first week of working from home. I brought my office equipment home that weekend, as I needed to be up and running the following Monday.

COVID-19 had already upended lives everywhere by mid-March. Soon, the experts predicted, we would be locked down. But I had a vehicle to drive. This 2020 Jeep Gladiator Rubicon had been delivered earlier in the week.

So, we got outside – while we still could.

Into the empty wild 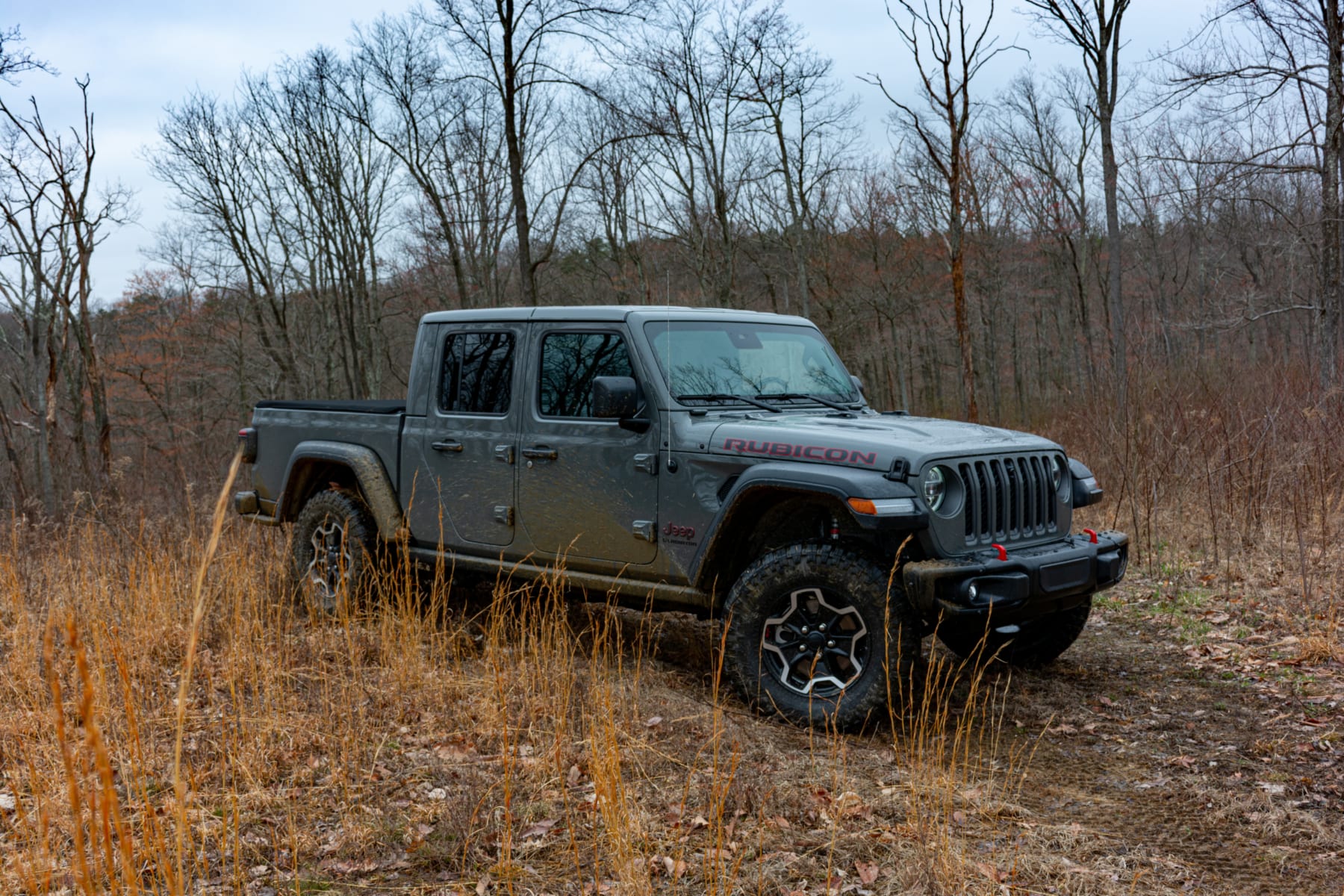 Doubtless, you’ve seen other reviews of the Gladiator – it was one of the most anticipated new vehicles in the last year or so. Many of those reviews were accompanied by photos of said Jeep bounding over dunes or crawling up improbable trails on public lands, free for the playing.

Not here. I’m in Ohio, where we take great pains to ensure nobody might stumble upon the natural beauty of (some of) this place by obscuring it with interstates, strip malls, and the like. Still, there are some marvelous places in this state, and I’ve been making an effort to explore them all with the family. 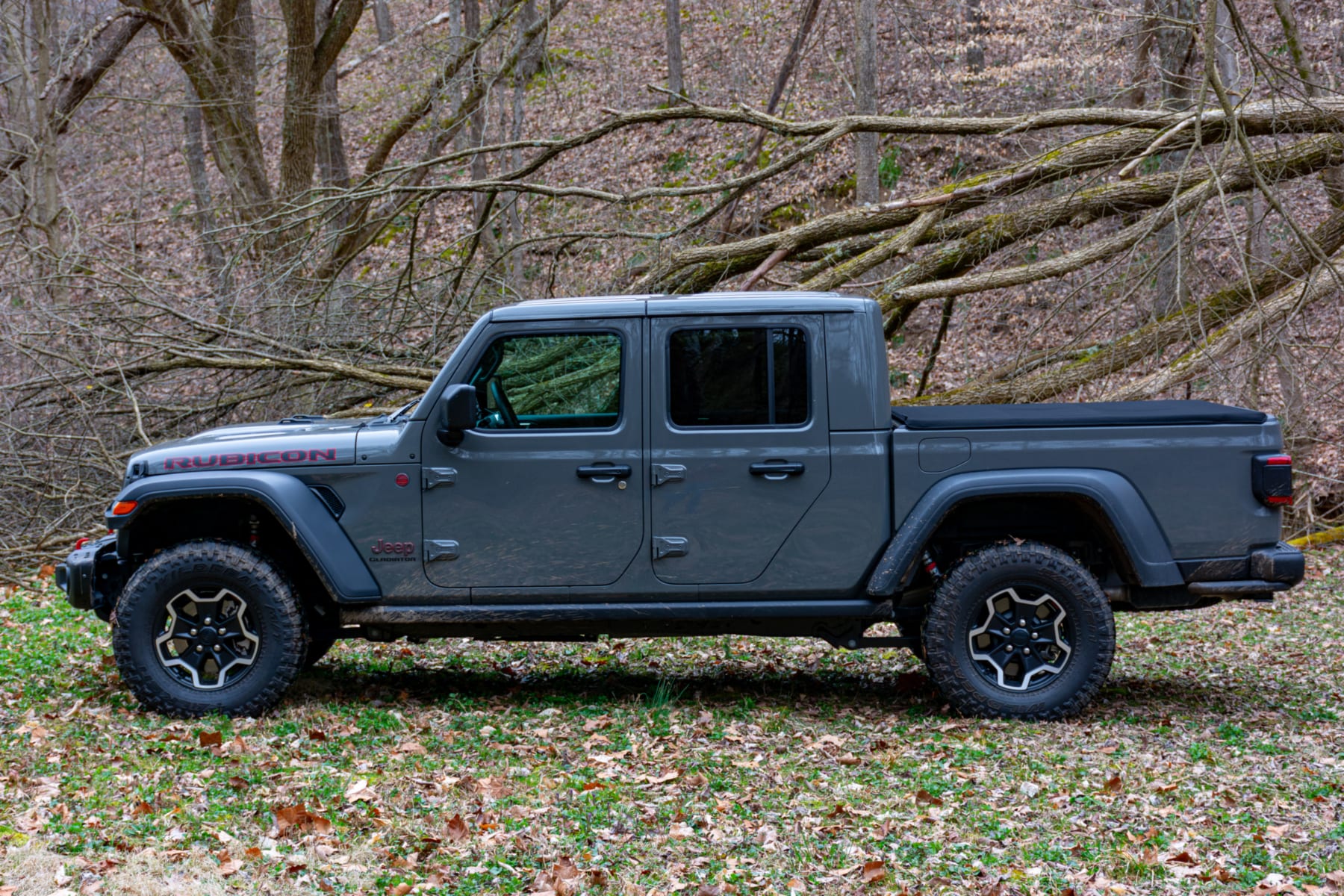 My friend and colleague Jack Baruth coined a phrase recently about the current state of driving here in Ohio: The “Chuck Berry” law, where you can drive only if you have no particular place to go. Indeed, we were ridin’ along in my (borrowed) automobile, curiosity runnin’ wild, with the nose of the big Jeep pick-em-up truck pointed southbound. To the foothills of the Appalachian Mountains did the Tonn family ride, a craggy, sparsely inhabited corner of the state where the roads meander like the many streams that feed the great river.

A good match for this journey? 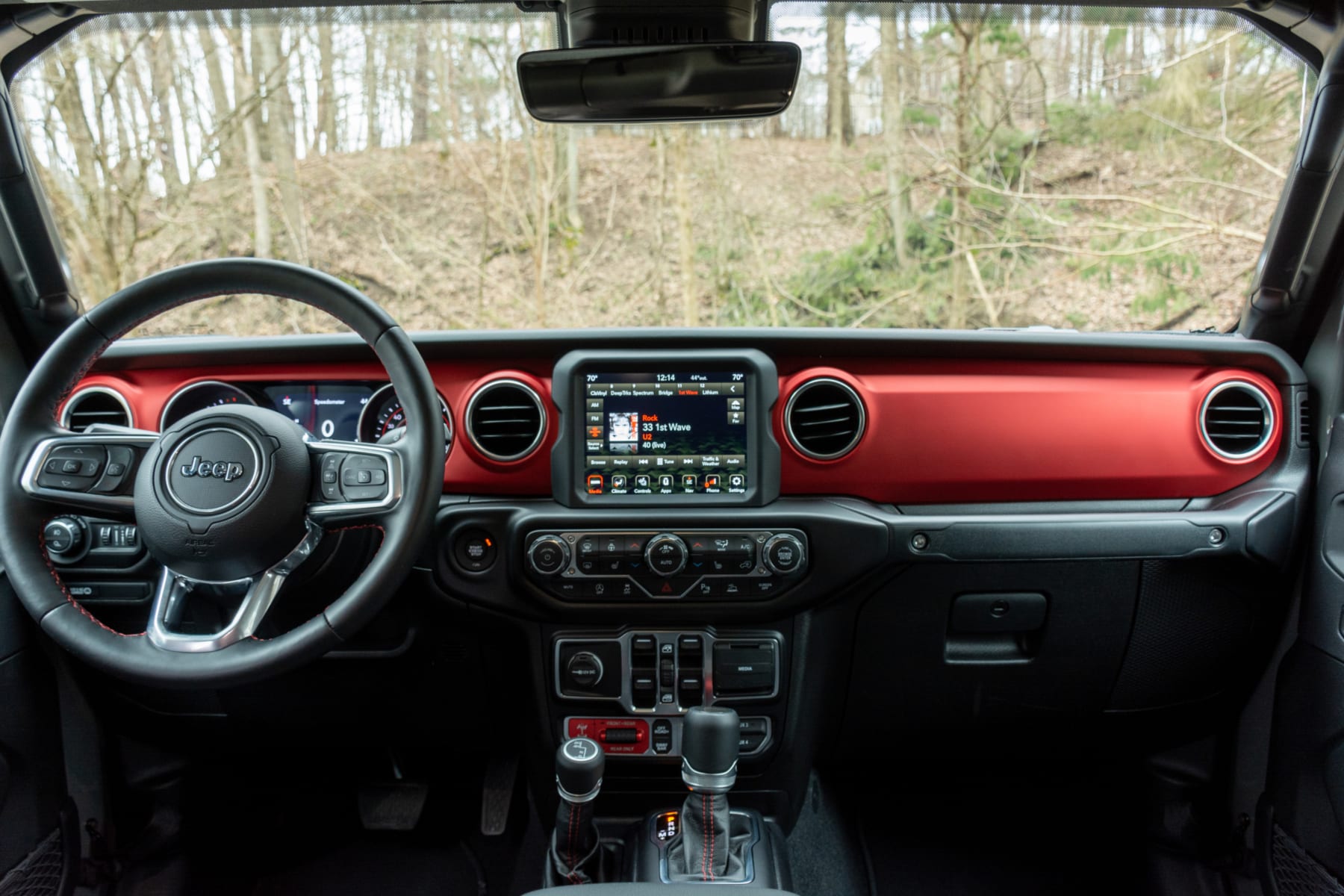 The Gladiator Rubicon was perfectly acceptable for the first part of our journey, as we set off in the wee hours in hopes of catching a magnificent sunrise. The light didn’t cooperate, but I’ll use whatever excuse I can to get the kids moving early in the morning. The promise of a killer independent doughnut shop along our route helped rouse the kids, as well. 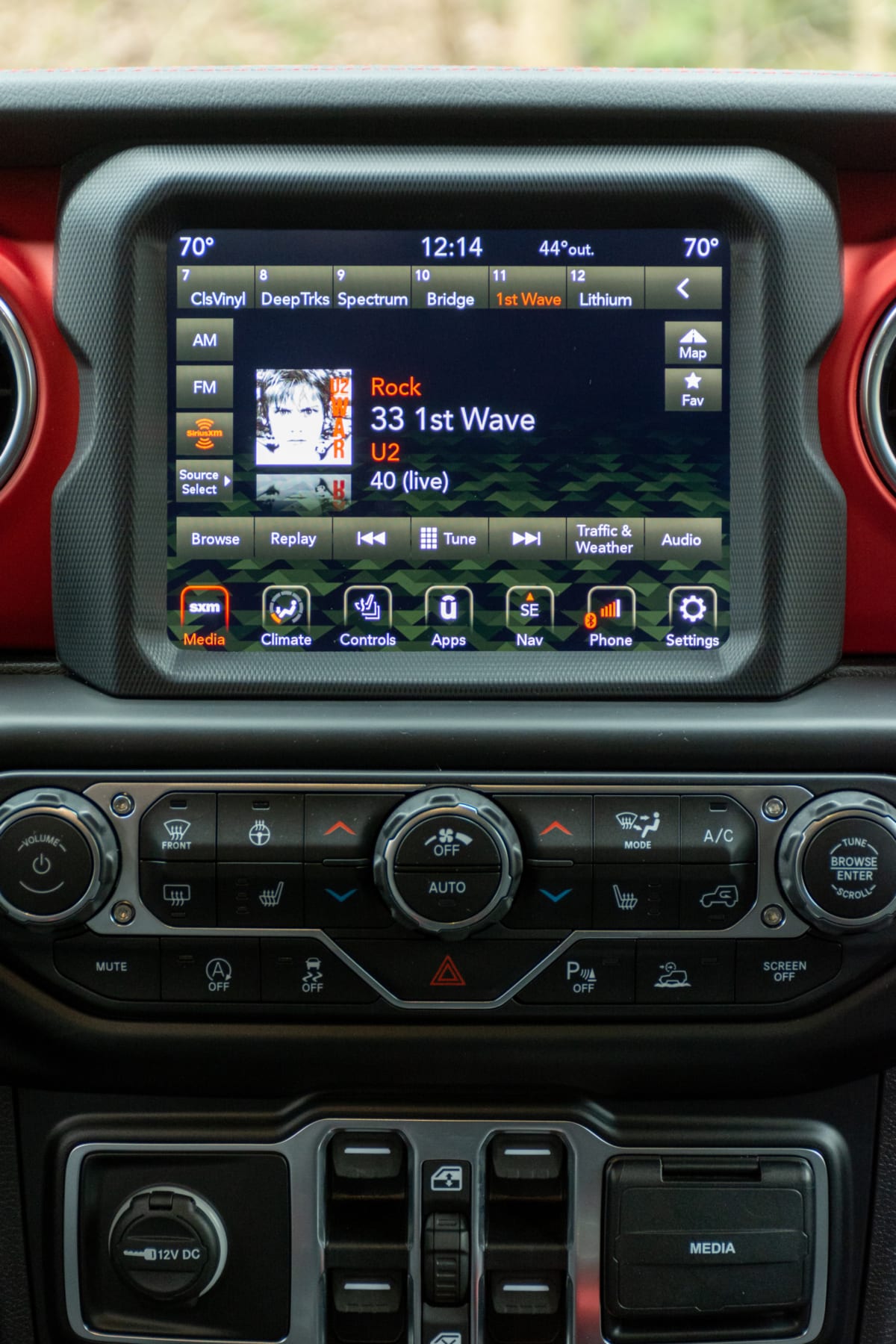 I did note one annoyance as the clock struck half past oh dark thirty – the central 8.4-inch touchscreen, situated as it is in the standard Jeep Wrangler with a screen very close to vertical, reflects against the much closer rear glass of this pickup truck model. Had the screen been raked a few degrees more away from vertical, this niggle would have been avoided – but it’s not something that is a problem in the parent Wrangler model. If you’ll be driving at night, work your way through the screen settings to dim the brightness unless you want to continually feel like a low-resolution render of an album cover is constantly following you. 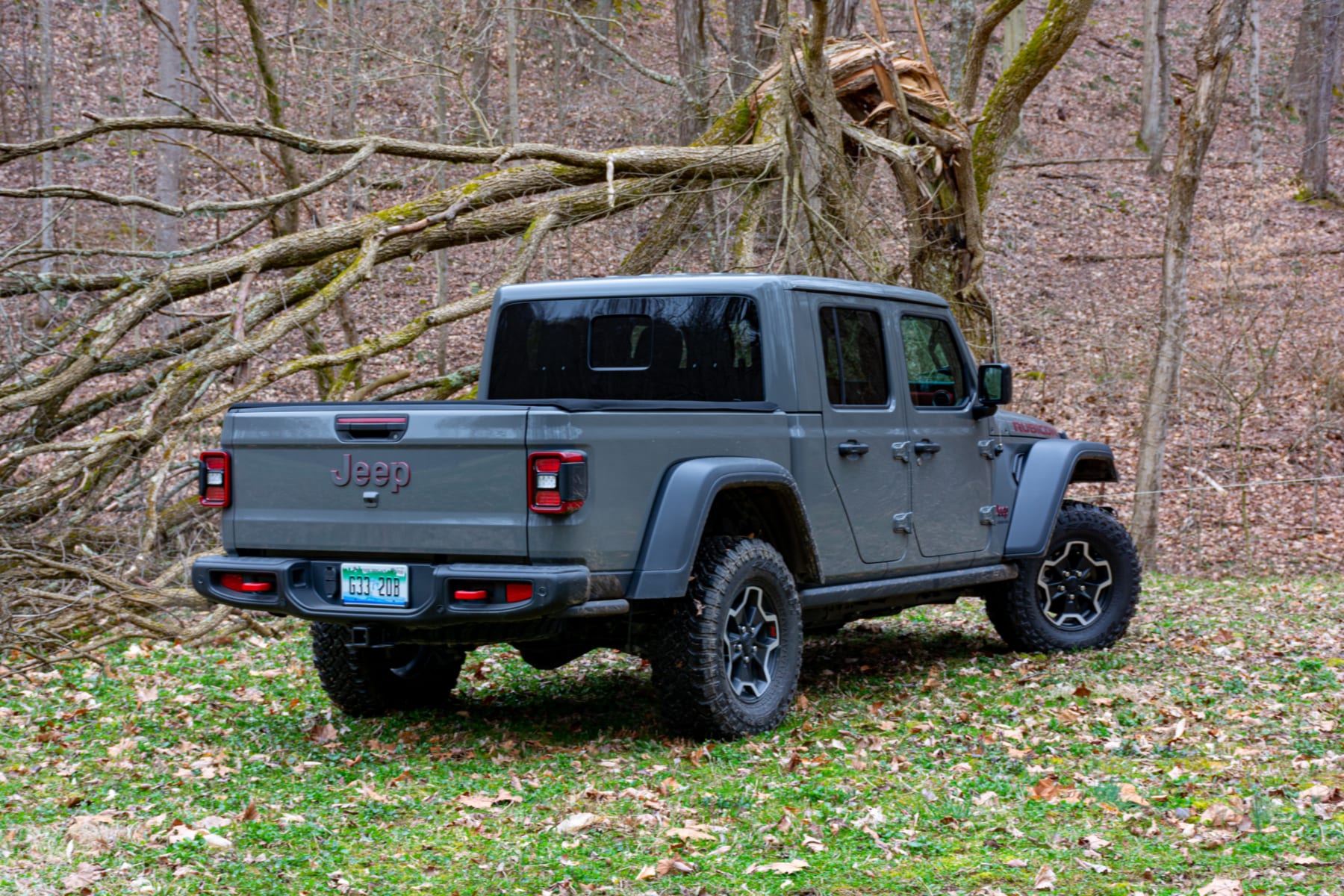 Perhaps I’ve gone soft in my middleagehood, but I’m not a fan of the Rubicon trim for primarily on-road duties. The off-road-focused suspension combined with knobby tires makes for a less than comforting ride. It’s manageable, certainly, but I’ve found that less focused trims will handle 99% of my driving with aplomb while saving some bucks on the initial payment. Should I decide someday that my Jeeping shall be more frequent and muddier, the aftermarket can quickly change a lesser Jeep into something with even more capability than this Rubicon. 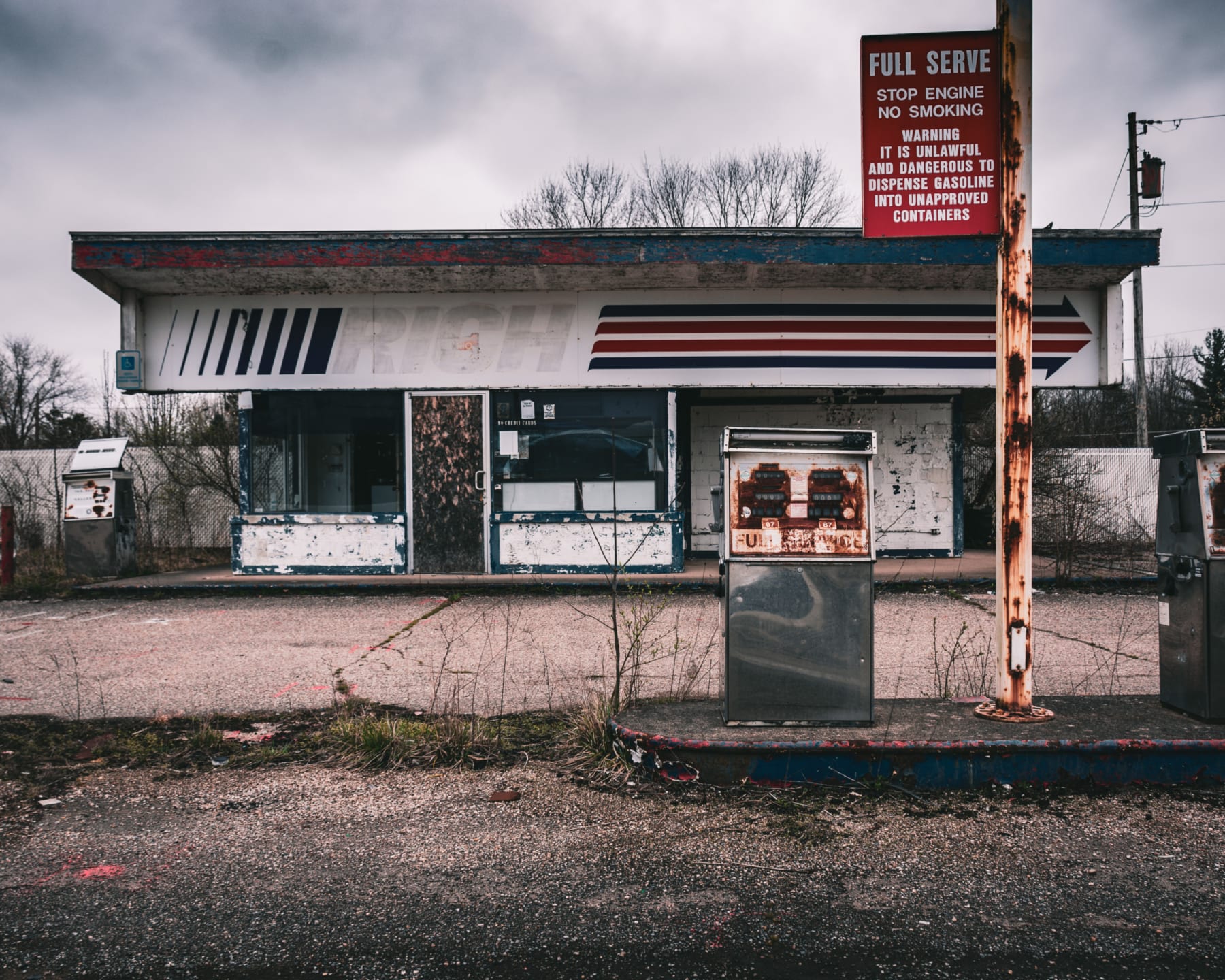 Doughnuts and coffee acquired, we journeyed south a bit more, to this abandoned gas station along the divided four-lane highway. It’s hard to say how long this fuel depot has been decaying – look at the pumps. I don’t recall many of these pumps in my travels once I started driving in the early Nineties. Outside New Jersey and Oregon, when was the last time you saw the option of full-service fuel?

Where do we go next? 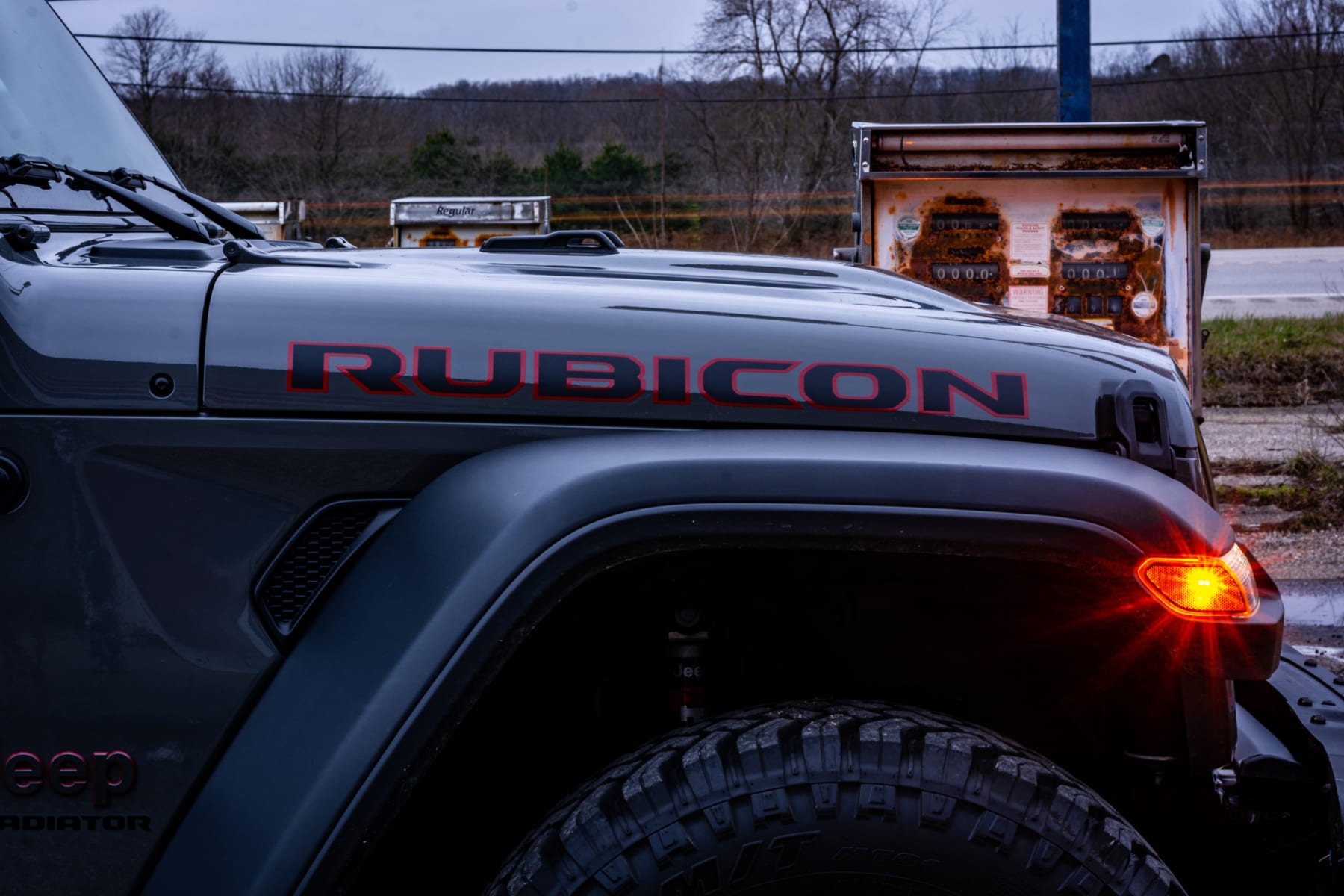 As we work our way through this pandemic, will there be more abandoned places like this for us to explore? Thousands of small businesses forced to close, or to adapt their wares to a no-contact model, will undoubtedly shutter for good if they haven’t already. I worry for the doughnut shop – the owner and their employees alike – that relies on employees of other businesses that are similarly foundering. National chains in most industries are struggling – the independent businesses without the safety net will have a monumental challenge to recover. 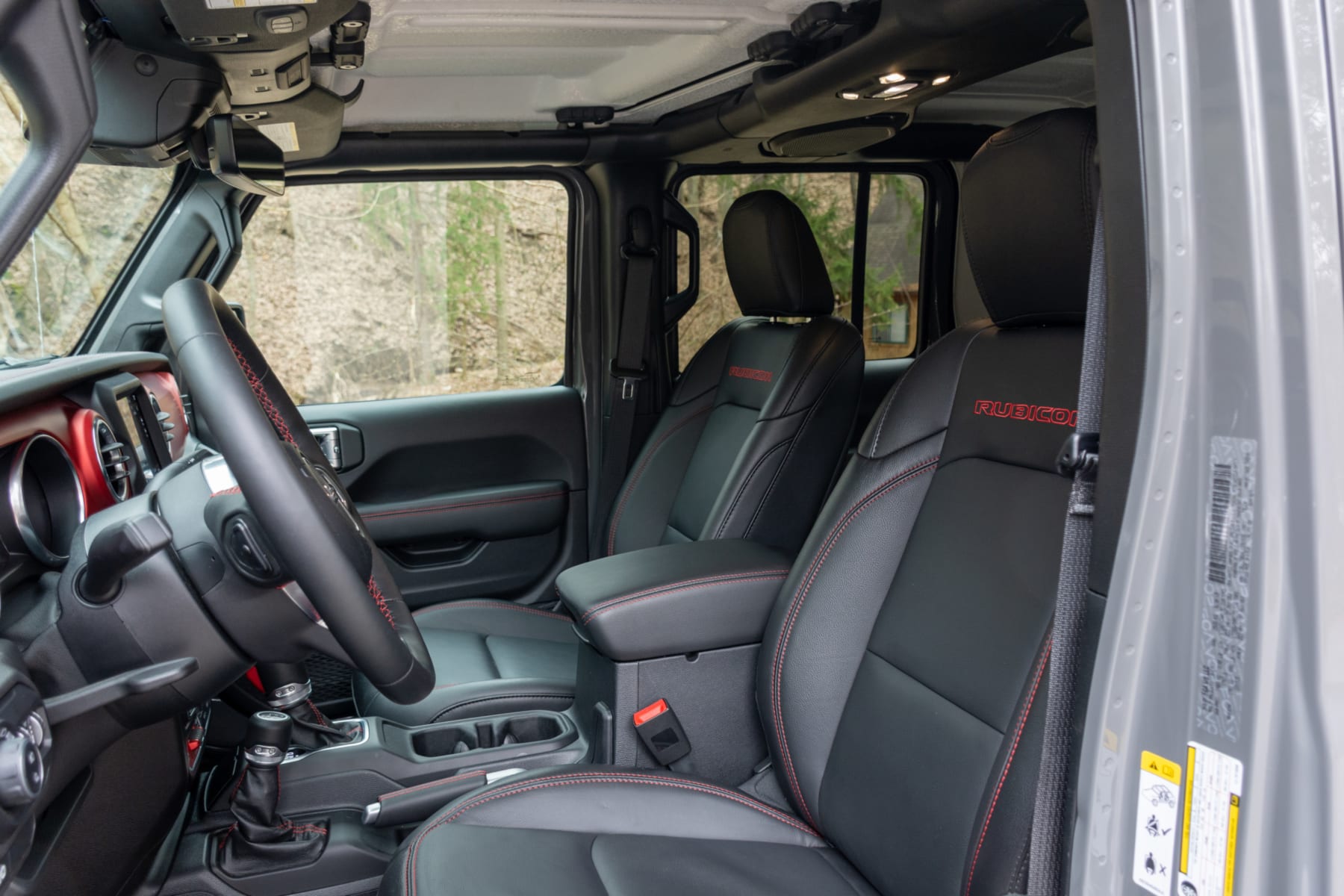 We turned east from the highway, along the two-lane state routes numbered with three digits to signify their relative insignificance to the state highway department. These roads rise and fall with the land, and as we journey deeper into the hollows, they twist continuously. I’ve spent a fair bit of time on these roads over the years, typically in sports cars and hot hatches best suited for corner carving. I was pleasantly surprised at how the Gladiator managed. While certainly not meant for apex hunting, this long Jeep felt smaller and more nimble than I’d expect even as the low Armco barriers inched closer to the road surface. 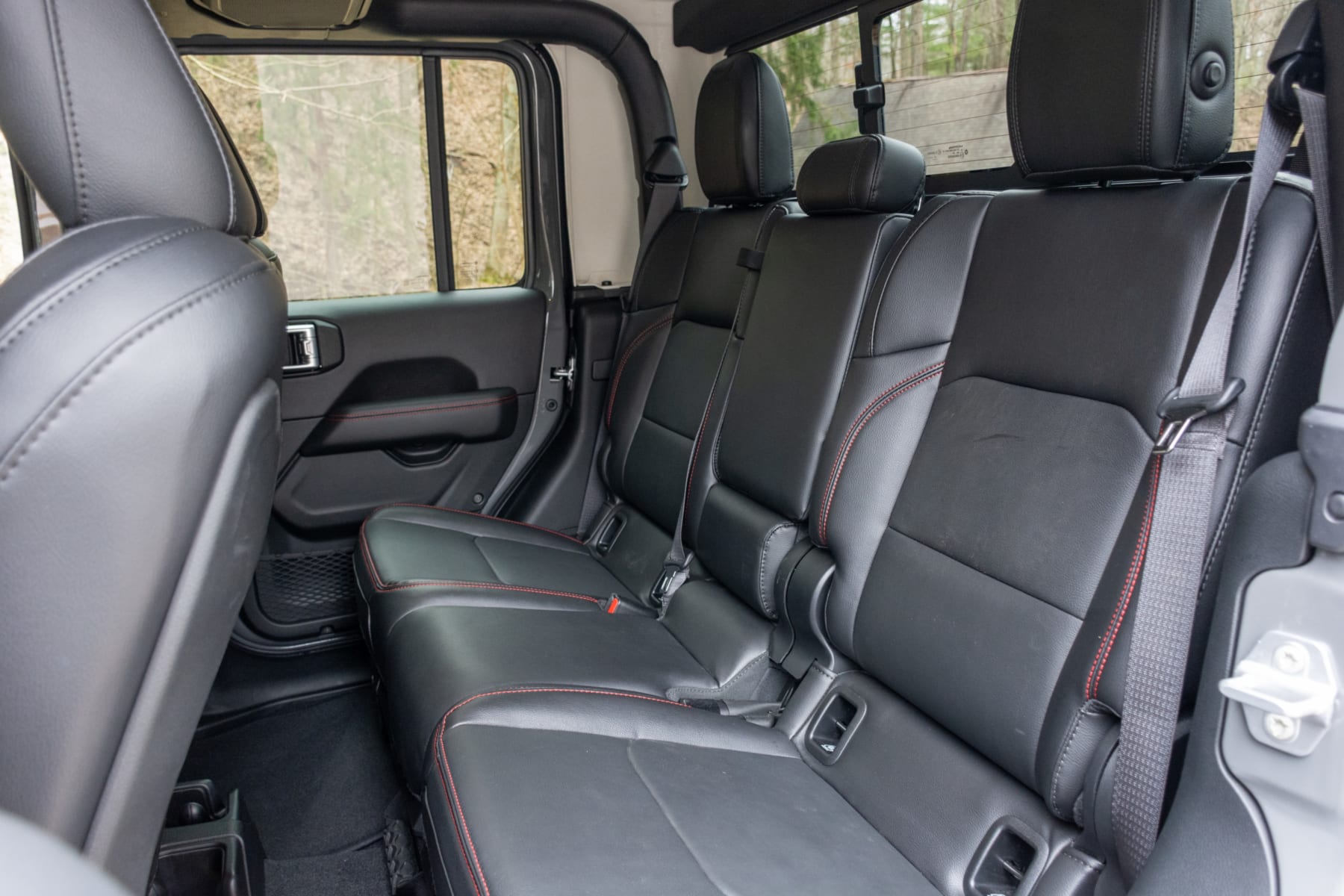 Our ultimate destination was a state park that reputedly has some unpaved trails where, in the pre-apocalypse days, off-road enthusiasts would gather for some good old-fashioned wheeling. Much of Ohio, while having avoided a snowy winter, has experienced more than average rainfall – so I was seeking a bit of mud in which to attempt getting stuck. I drive a minivan every day, after all – something with knobby tires deserves a workout in conditions different than my usual suburban commute.

We were disheartened to see that most of these trails were blocked by park-installed barriers. Whether these barriers were erected to discourage hooning while most park rangers aren’t coming to work, or to protect drivers from fallen trees after the winter, I can’t say. I did find a few open trails where we could at least shift into the high range of four-wheel drive and responsibly throw some mud on the paint.

I’ve driven examples of all three engines currently available in the Wrangler and Gladiator, and I have to say that the 3.6-liter V6 in the Gladiator is my least favorite. The high-revving nature of this naturally aspirated six does not pair well with low-speed wheeling, where torque is your friend. I’d much prefer the two-liter four-cylinder turbo, which has a more natural torque curve for easing out of tough spots. The eight-speed automatic is a better pair for the four, as well – it holds onto higher gears a bit too long. In daily driving, the six is acceptable, but I’d rather see the four be made available.

Wildlife is out and about 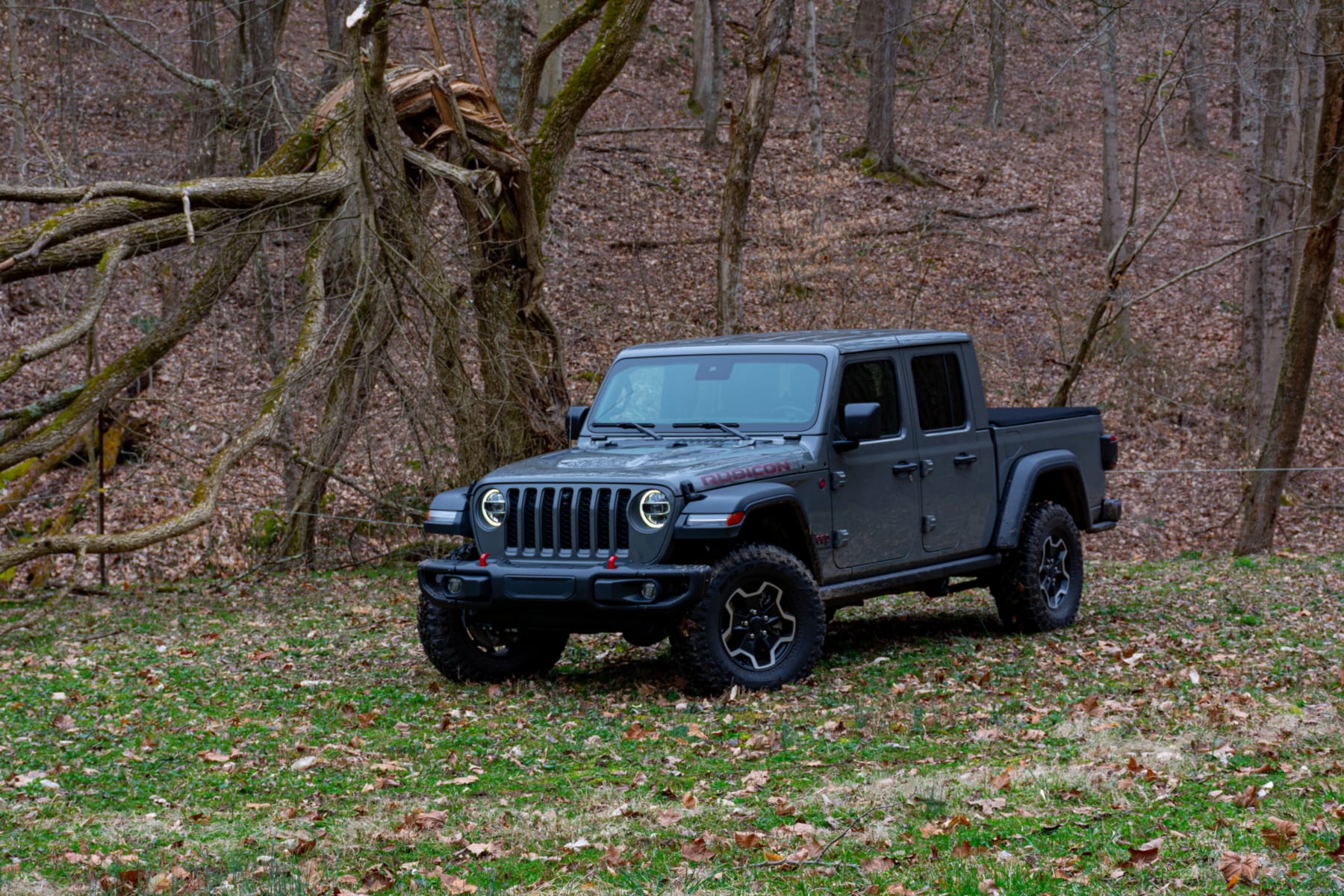 Save for the plentiful wildlife, the park was basically deserted – I think I saw three other vehicles in the park in the three hours we were there. Ohio’s governor, Mike DeWine, had specifically suggested in his daily press conferences that restless Ohioans get out and enjoy the state and metro parks where possible – though, for the safety of the park employees, all restrooms would be closed so nobody would be forced to clean up after a potentially-infected parkgoer. Minding the six-foot separation was no issue on this chilly Saturday – though we found in subsequent weeks that many walkers and joggers in other parks were not distancing as required.

We parked the Gladiator along one of these sloppy trails and disembarked. Neither my pair of tween daughters nor my wife heeded my suggestion to wear boots, so our endeavors on foot were brief – avoiding as much mud as was feasible. Still, it was rejuvenating to get out of the truck for a bit, to enjoy air that hadn’t been filtered and conditioned for our comfort.

The girls scampered off, taking photos of each other among the barren trees. My bride and I looked at each other and shared a moment of relief. A gentle sigh followed as we both acknowledged that it was time to return to our suburban tract prison cells for another week of captivity.

We plotted our course for home via the excellent Uconnect navigation, making certain to stop at a truck stop we’d noted on our drive south as both being open and having a markedly lower price than other nearby options. The Gladiator, like most midsized trucks, is thirsty – the EPA rates it at 19 mpg combined, which seems on par with what I managed in my unusual week of driving.

The Gladiator is still very much a Jeep thing 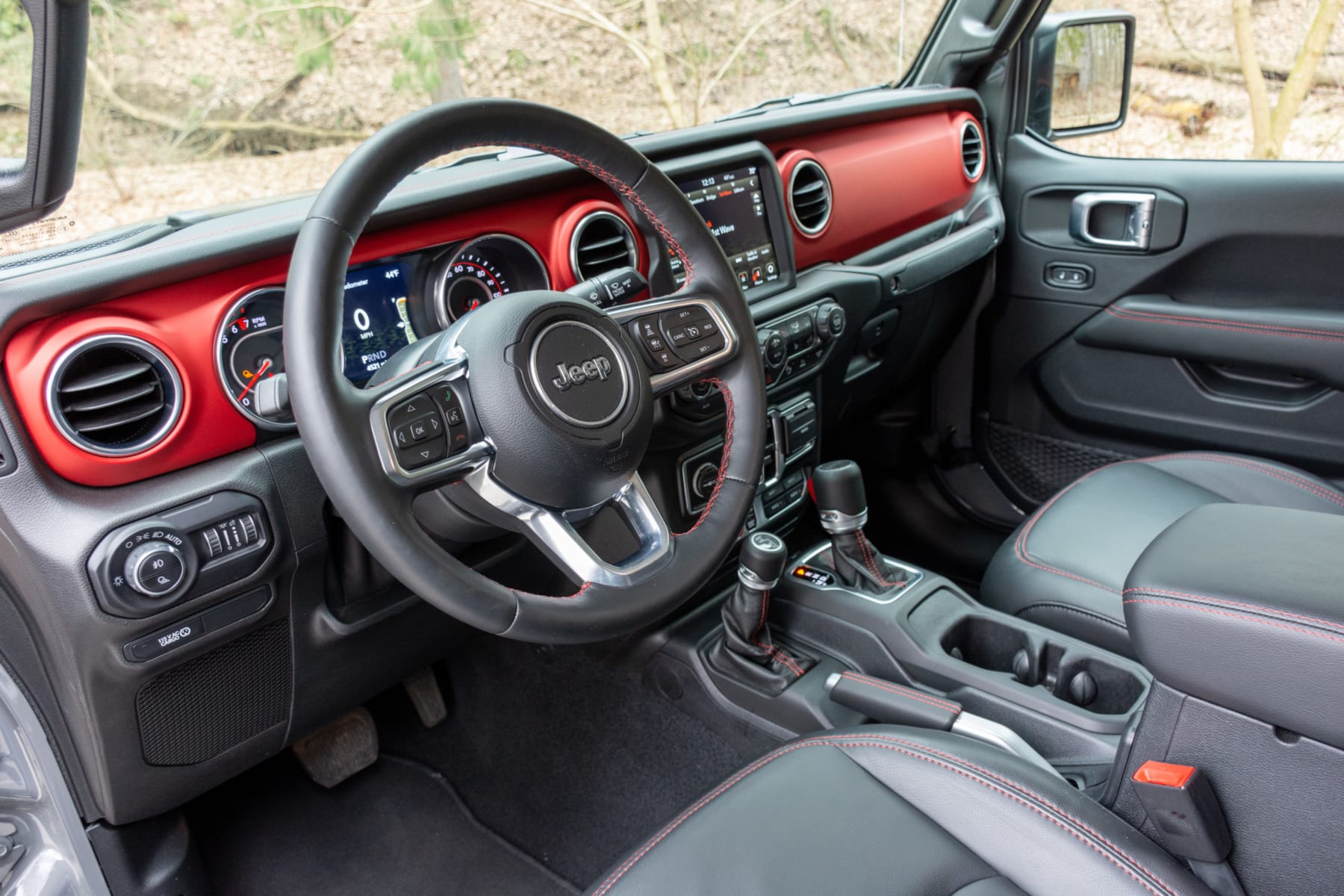 There’s no question that the Gladiator is a significant departure for Jeep, as it expands the Wrangler formula into a much more useful vehicle for many potential buyers. It’s not the ideal midsize pickup for me, however – there are too many on-road compromises in this Ohio-built truck for this Ohio-born driver to see beyond. I’d prefer something with a more relaxing highway ride for the everyday commute.

That said, this Jeep Gladiator Rubicon will long remind me of a brief, but special journey with my family. As we (hopefully) move past this pandemic in the coming months and years, my girls will grow and move on. This disaster our world is currently facing is horrifying, but it will end. The smiles on the faces of my family as we endured a bit of this crisis will be forever etched in my memory, as shall the vehicle that helps bring out those grins. 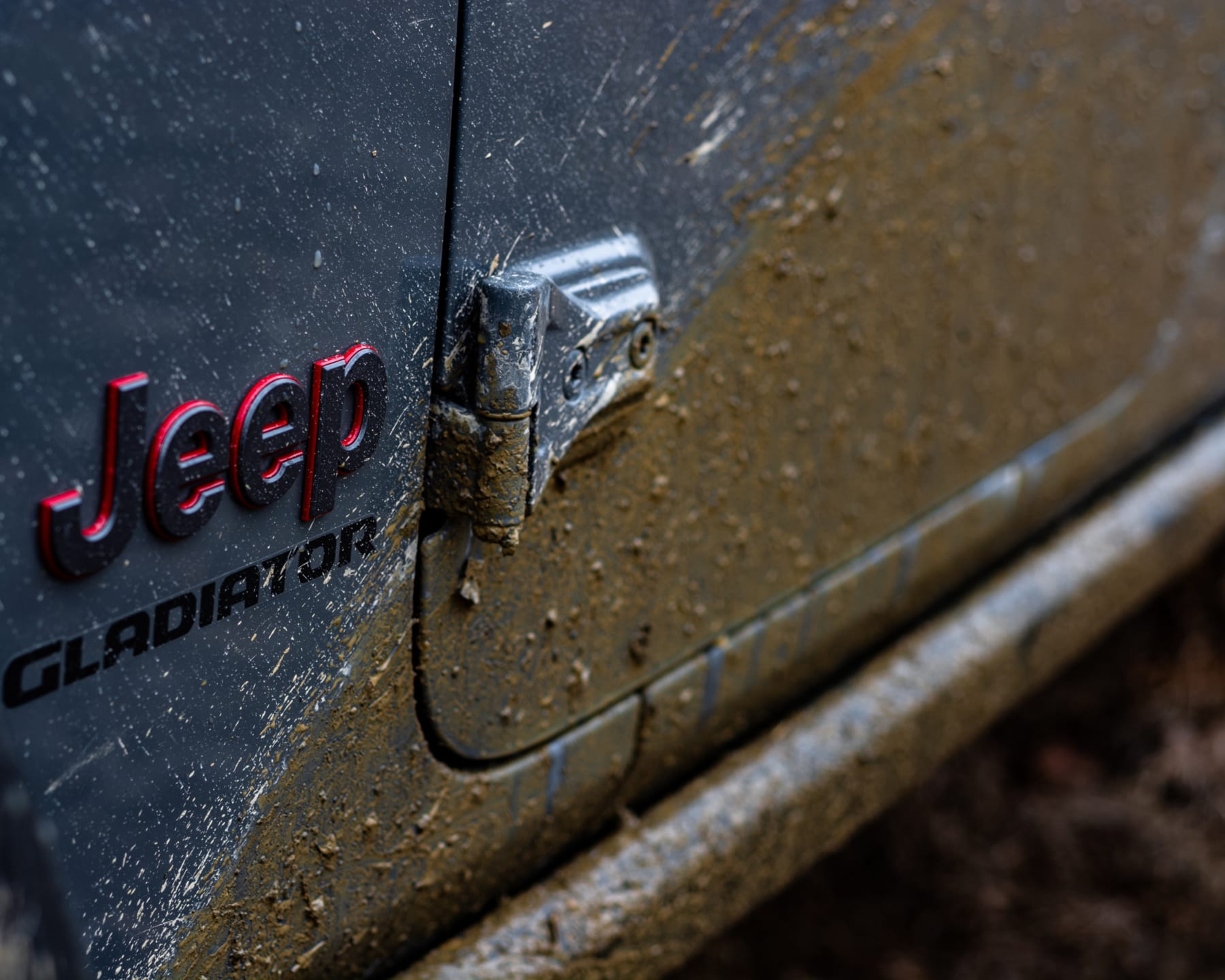 About the Author: Chris Tonn

Chris Tonn is a lifelong classic sportscar enthusiast, as he was driven home from the hospital in his father's Datsun 260Z. He thinks it still had the awful flat-top carburetors, but as he was three days old at the time, he can't be certain. He grew up around sports cars from Datsun and MG, but will happily lust over cars from any country and manufacturer. An Iranian-built Peugeot is near the top of his must-own list. As a father of two active girls, Chris drives a newer Chrysler minivan - though something with a big block and Di-Noc would be a perfect replacement - and uses a rusty old Miata as a shelf, waiting for the day that it can be uncovered as a priceless barn find.