Anchor Moto: A bike shop formed in the back of a punk bar

When most people think of choppers, they think of Easy Rider (that’ll teach them hippies to smoke dope) or atrocious soap operas on Discovery Channel. It turns out there’s more to it than that. A year or two ago, in a tiny garage in Kansas City, I got a crash course in what a real chopper shop was all about. There was talk of punk rock, tattoos, passion, fear, death, pride, and legacies. Ricky Reyes is the owner/fabricator of Anchor Moto. He’s probably not what you’d expect. Sure, there’s a beard and tattoos. But he’s also a vegetarian single father who plays in a punk band.

Reyes has been riding motorcycles for as long as he can remember. His world was formed of dirtbikes and hot rods. Choppers were discovered later in life. He had been riding bikes best described as “disposable” for ages. Buy one for a few hundred bucks, ride it for a while, then sell it to a friend, or toss it after it’s been wrecked. Rinse and repeat. That was up until he saw his first chopper in person. Mind blown, there was a new goal in his life: build one of his own. 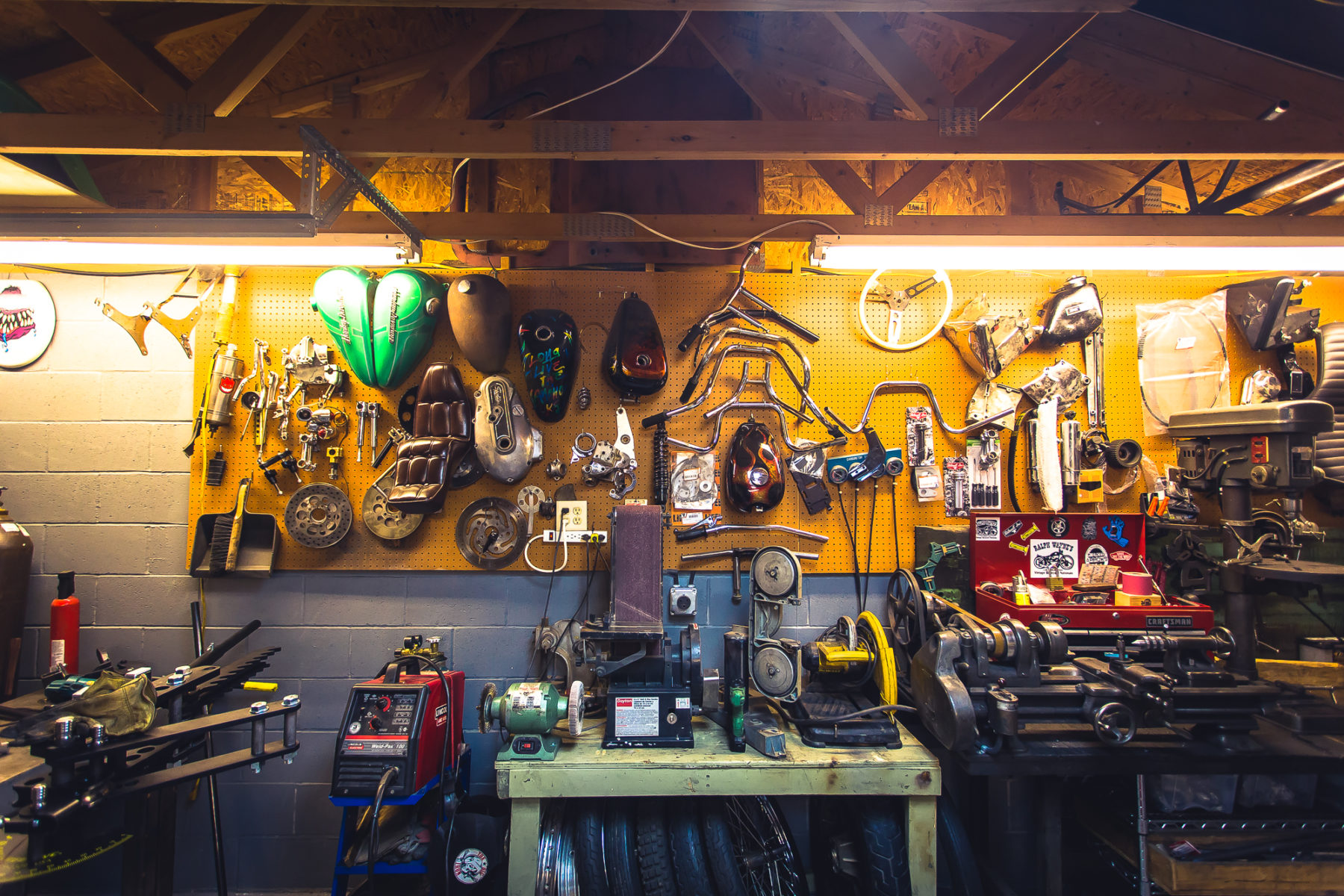 Reyes went home. He cut his bike in half, and then set about teaching himself how to build it back up. He knew nothing about how to go about it, but a lack of knowledge is no excuse to not try. And his efforts soon resembled a proper chopper.

After he finished that first bike, friends began asking him to work on their machines. A set of bars here. An exhaust there. A sissy bar there. Piece by piece, and lesson by bloody lesson, Anchor Moto took form just as the parts themselves came to be. What started in the back room of a punk bar in the old stockyards district of Kansas City (known affectionately as the West Bottoms), somehow grew into a full time job. It now operates out of the three car garage attached to Reyes’s house, so that he can be home to raise his kids. Like I said, it’s not really the scene you’d expect.

Forget what you’ve seen on TV. There are no CNC machines or CAD drawings. Just a lathe, a mill, and a bunch of hand tools jammed into a box that’s older than some of my coworkers. Reyes freely admits that he’s “terrible at math”, so there’s no renderings or schematics. Everything is cut, welded, tested, cut again, tested again, and welded again. On and on, honing in on what feels and looks right. 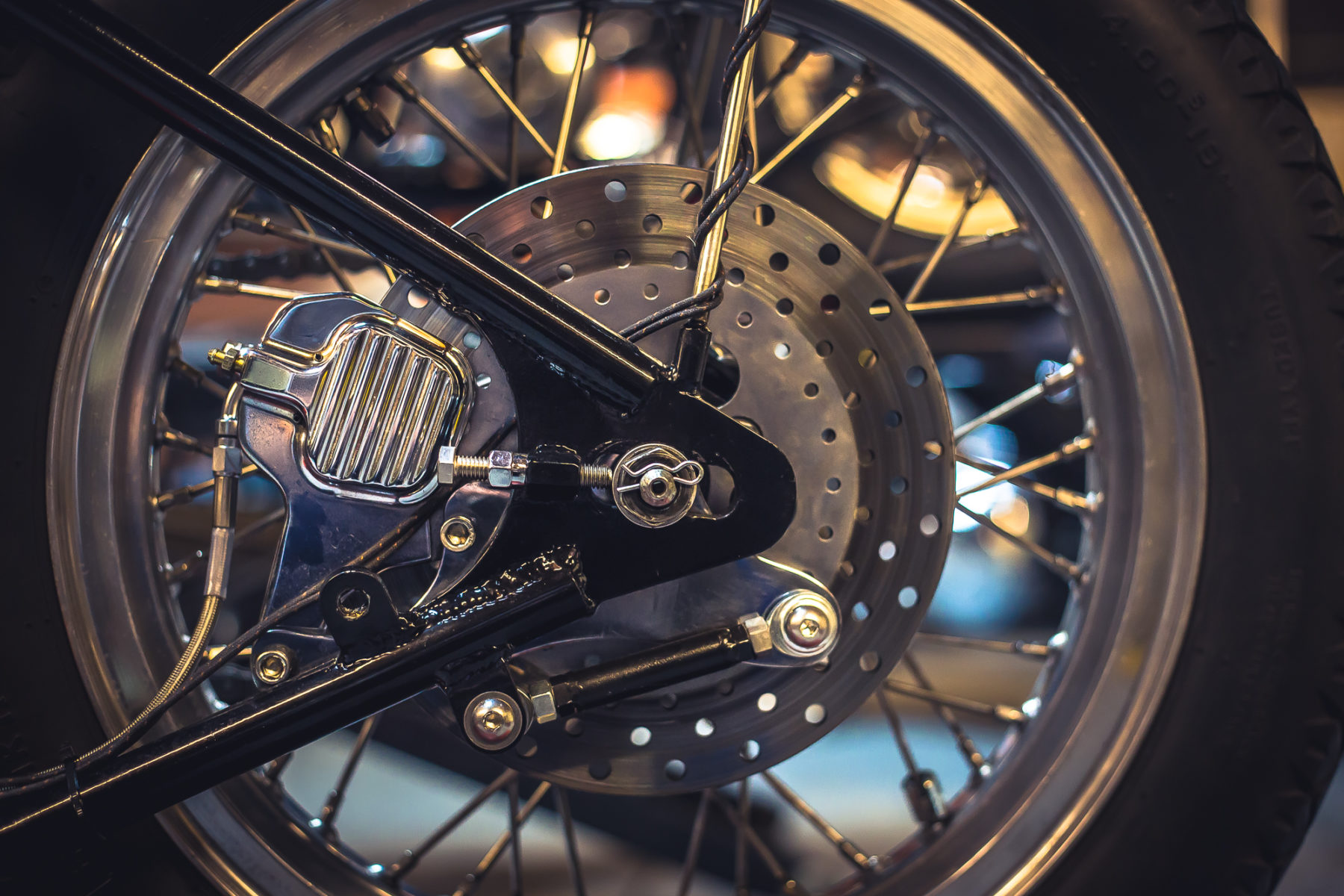 While choppers are definitely a form over function motorcycle, there’s no reason they can’t be usable. That’s one of the core tenants of Reyes’s philosophy. It all has to work. If it looks rad, but can’t bomb across the plains at triple digit speeds, then what’s the point? These bikes regularly see everything from gravel roads to forlorn industrial estates, so everything needs to work. It needs to go, stop, and be comfortable. I know that sounds obvious, but you’d be amazed at how little emphasis on ridability there is in the custom world. In a culture some are removing their front brake so it looks “clean”, performance isn’t always a high priority.

The best way I can think of to explain how the bikes are designed is to compare it to a tattoo parlor. A customer will come in with an idea, some more fleshed out than others, and then the discussion begins. Sure, a shitty tattoo artist will take your boyfriend’s sketch, trace it directly, and send you on your way, but a real artist will spend some time. You’ll have your concepts, or your photos, or your sketches, and then the artist has their years of experience that will inform what is or is not a good idea.

So if someone comes in with photos of a hardtail with a half gallon peanut tank, excited about how they can’t wait to ride it coast to coast, it’s Reyes’s job to explain that there may be some flaws with that idea. Yeah, it’s their money, but as good artisans should, he wants them to actually enjoy the end product. So ideas are batted back and forth, pros and cons are discussed, and budgets are planned. 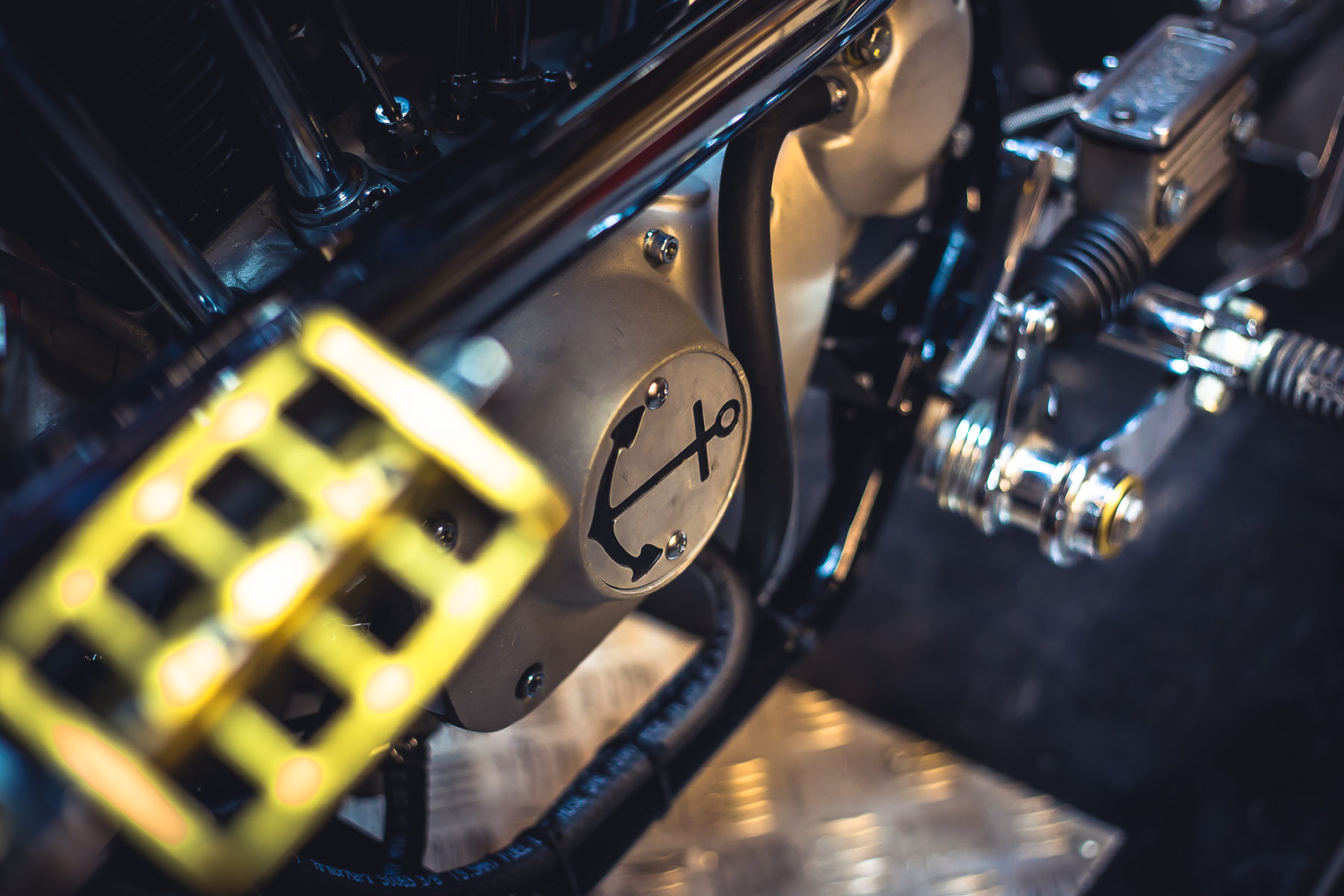 The world of motorcycles is heavy with a sense of impending mortality. We all know that there’s a chance that every outing contains the possibility for tragedy. You learn to shrug that off, but it’s always kind of floating behind you. Because of this Sword of Damocles, death and dismemberment are frequent topics of discussion. Reyes knows he’s going to die someday, so he is hellbent on leaving something to be remembered by.

The second tier to building is where the real perfection comes in, even if only three people will ever notice. It’s all about the details. Tiny, miniscule details. For example, after the bike is assembled, each individual bolt is marked, measured, and cut down, so that it extends just one thread beyond the nut. Every single bolt gets that treatment, On other machines, each fastener gets a matching brass washer. Still others get speed holes added to each component. Cohesiveness is the end goal here. Even if the parts came from half a dozen bikes, from three different continents, it should all look part of the same whole.

Those details are what distinguish a thought out project from just a cobbled together backyard project. Maybe it’s the GSX-R brakes now incorporated into the tail of a Harley Davidson, or maybe it’s the suspension components turned on the lathe, but each bike will have some little feature that stands out, if you know how to look. 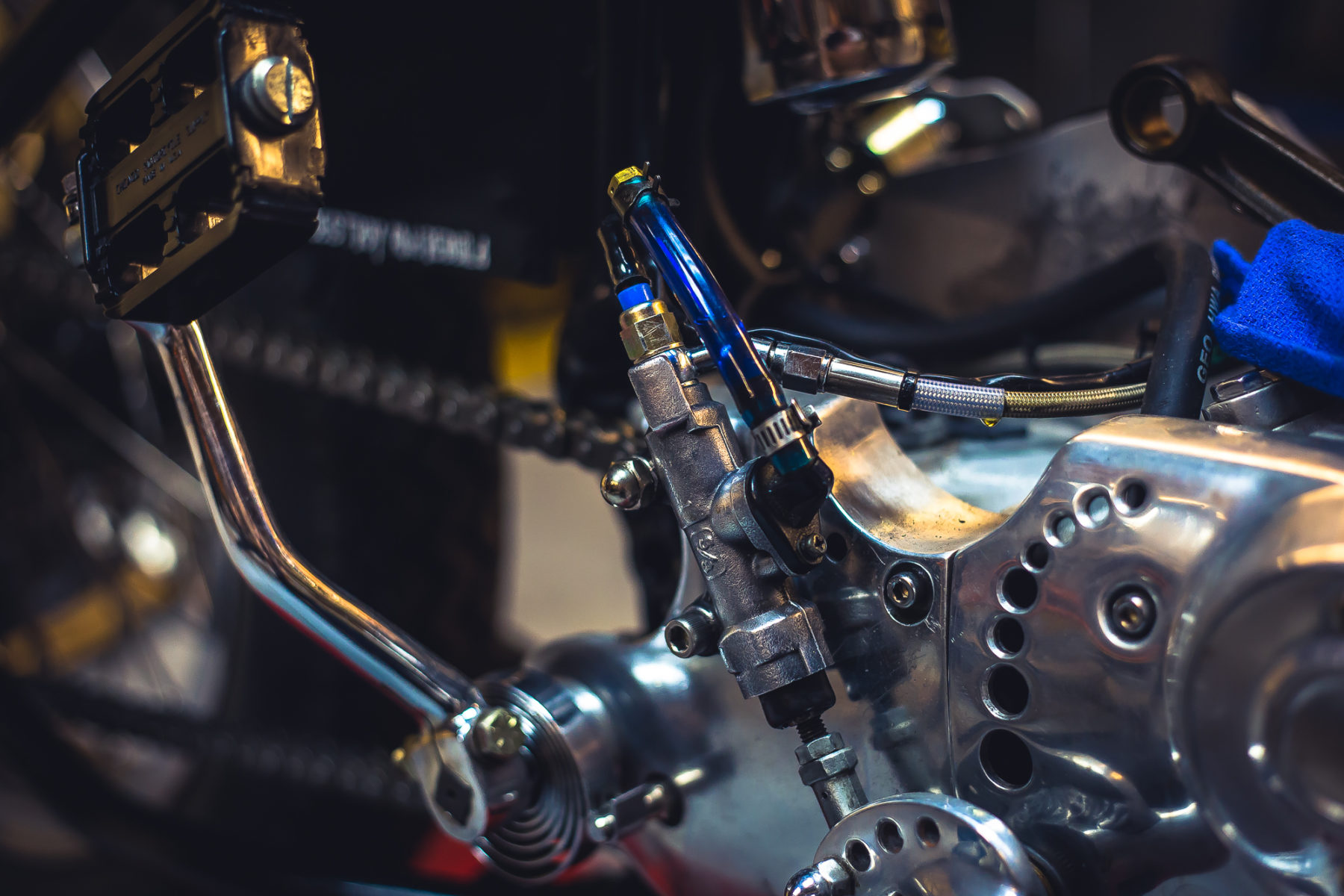 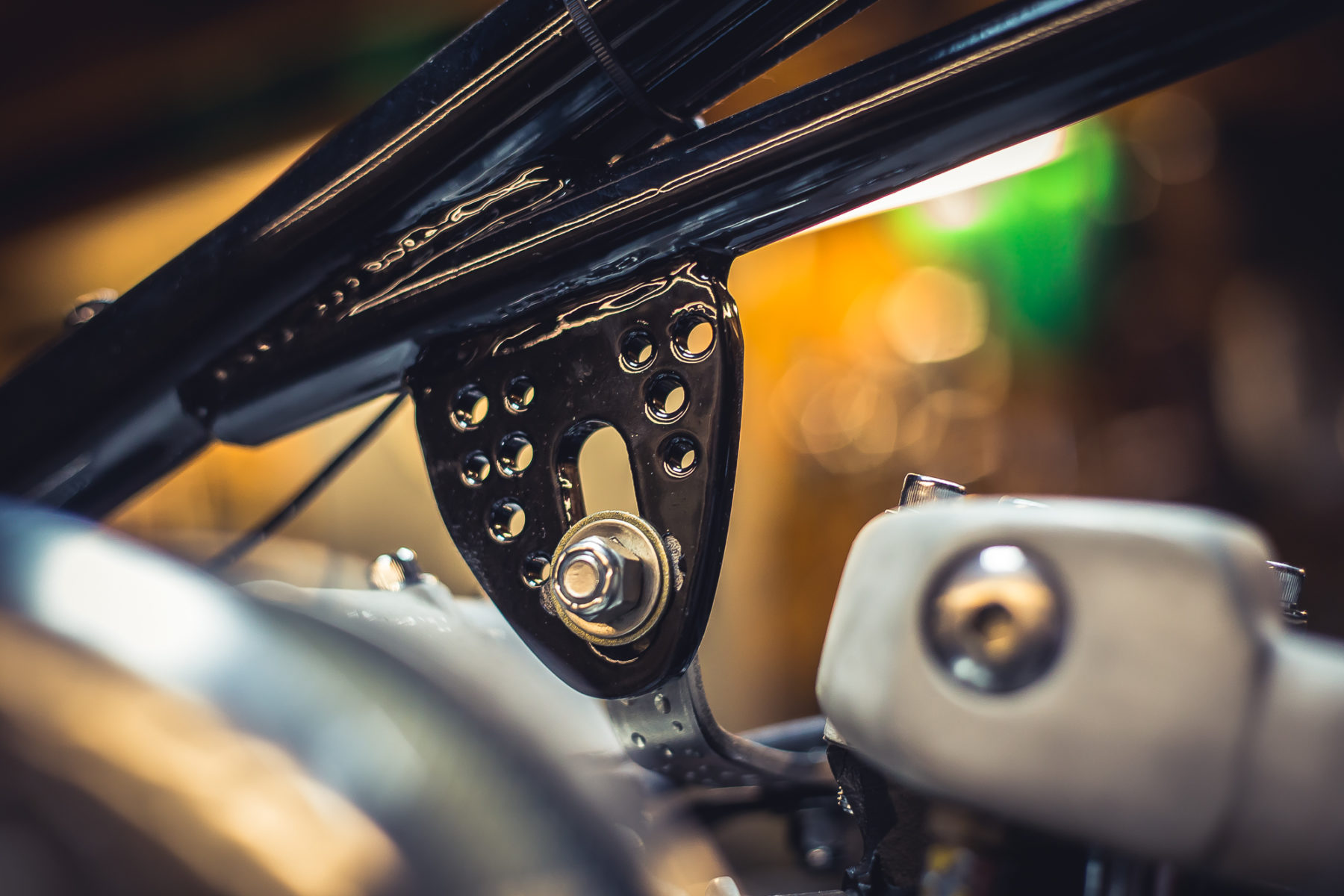 I’ll be honest, I’ve never put much stock in the chopper world. To me, it was tied in too close to the trailer queen Harleys that irritate me so. I like bikes that are used, not trophies that get ridden the three miles to the bar once a week. But after a few hours of chewing the fat in the Anchor Moto garage, I’m coming around some. Oh sure, the six figure chrome clad queens are still ridiculous, but that’s not what choppers have to be. Just because it’s had thousands of dollars of custom work, doesn’t mean you can’t ride the piss out of it. 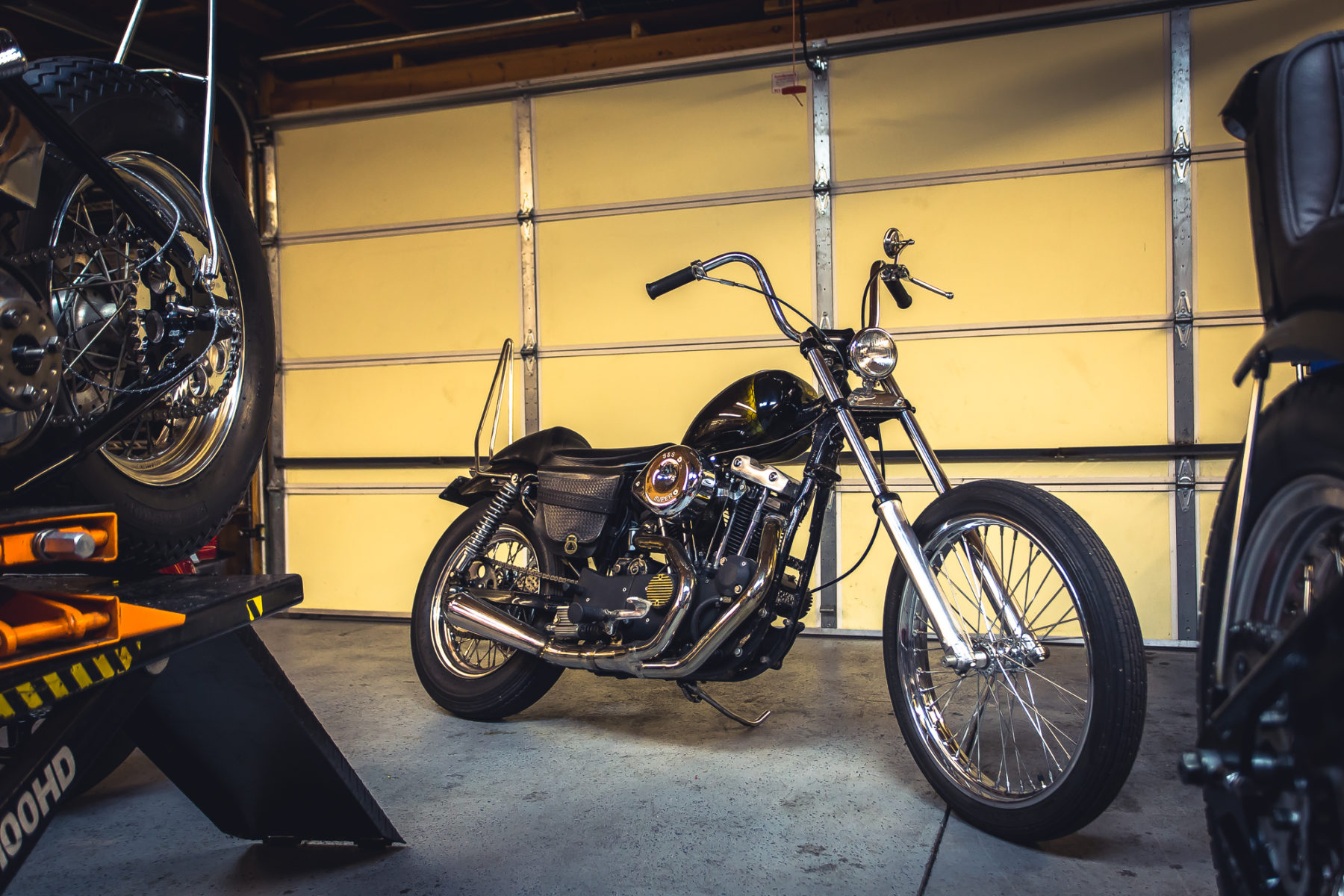 About the Author: Andrew Fails

Kansas City based writer/photographer with a weakness for small, terrible cars. IG: andrew_fails