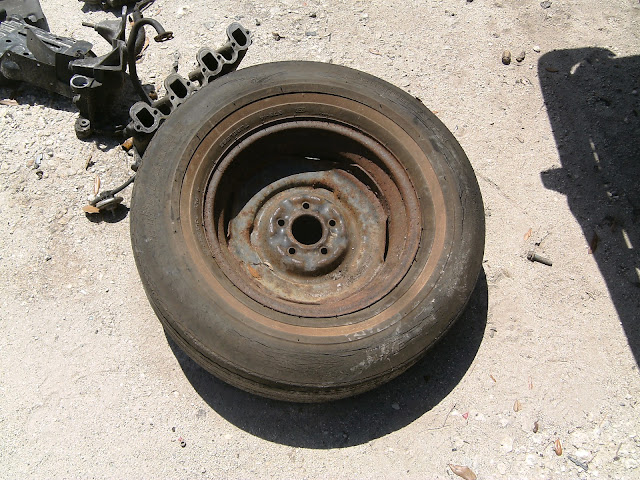 So, the other weekend while this olelongrooffan was out picking body parts for the “Charles Barrett Special,” I decided to tour a couple u-pull-its on my way back to the Taj Mahal. I have previously shared the experience of the smallish mom and pop one down in Deland. After that I stopped off at the corporate owned, computer inventoried one out by the Daytona International Speedway. 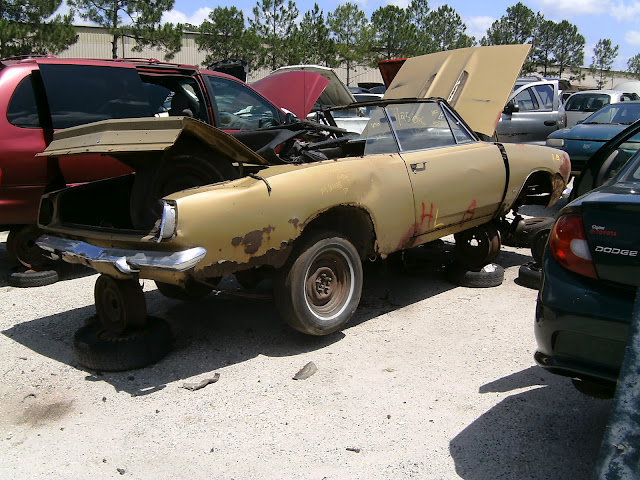 I specifically was looking for a set of 11″ brake drums for the “Special”. You see during the Jeep Beach weekend here awhiles back, the owner of one of the trailer companies we hawk needed a set for his CJ5. Turns out the ones he got from his local, Sarasota based brake company were making some weird noises. He was in the Home of the World’s Most Famous Beach and came acalling to see how things were over at bestpricetrailers.com. He ended up talking to thejeepjunkie’s co worker and found out that his shop is all things Jeep and Willys. thejeepjunkie diagnosed the problem and came to visit my cube. He explained the situation and the fact the drums of the “Special” would fit perfectly. Did this olelongrooffan want to part with them?  Of course, I commented, “If the price is right.” And it was, hence my search for new drums for my “Special”.& I mean what the hell, I now have a valid reason for wandering around in someone else’s yard. 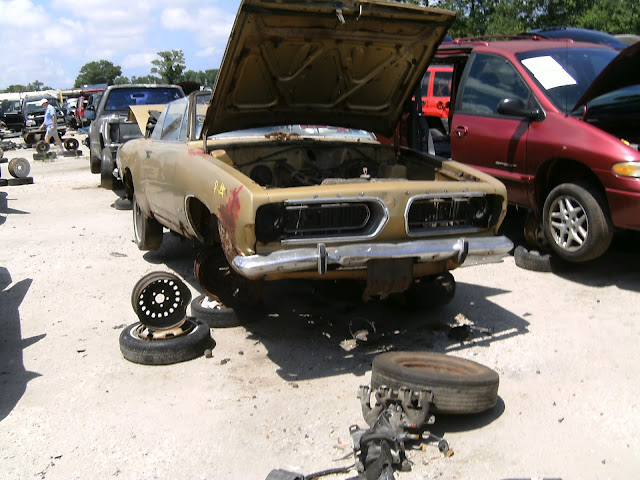 So the first place at that corporate owned junkyard this olelongrooffan headed was to the MOPAR section as that is where they keep the Jeep carcasses. Among all the mundane MOPAR products of 90’s was this thoroughly rusted out Barracuda vert. Ironically, the second or third post this olelongrooffan did here in the Hooniverse was about a Cuda at a MOPAR show I attended the same weekend our esteemed Blooger spotted a similar body style Cuda while out at a park with his wonderful family. The bias ply tire in the first image was spotted out front of this former beauty queen and she has definitely not aged well. 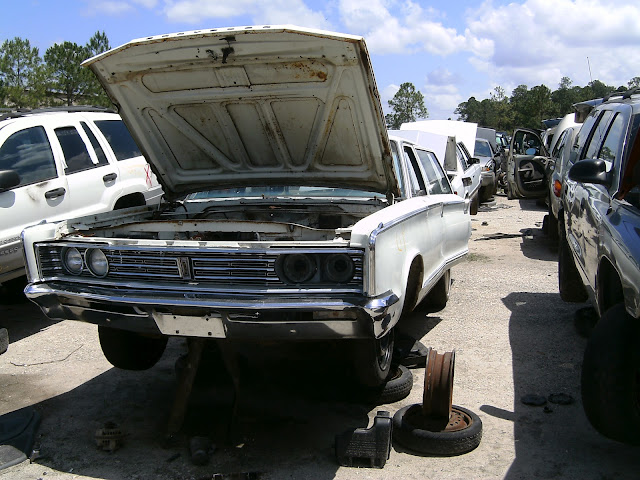 Just across the aisle from that 60’s sweetie was another but this one is just a tad bit larger. It was the matronly aunt to that Cuda, a Chrysler New Yorker that was relatively complete. A friend of my folks, who once told this olelongrooffan that I did a “jam up” job filing down the head of our 51 Ford F1, owned one of these back in the day. BTW, my brother, thehorsefarmer, bought his old 55 New Yorker when Hap bought his 67. 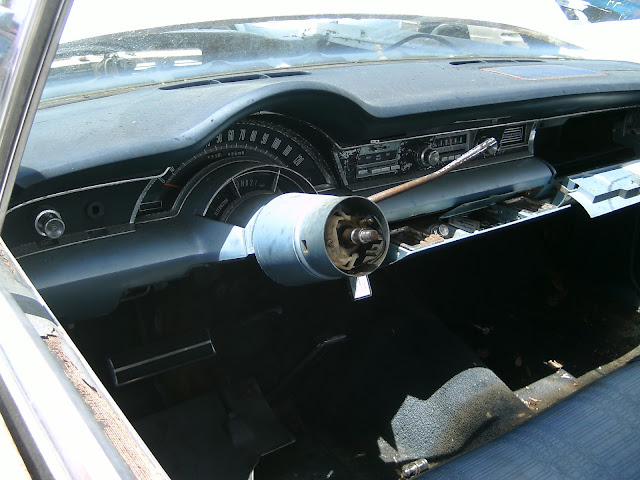 For whatever reason, some Hoon had removed the steering wheel from this stately queen. It along with the horn rim and horn bezzle were laying on the front seat of it. I trust my fellow Hoons to know that horn bezzle came home with this olelongrooffan that day. Check out the size of that ashtray. Remember those? 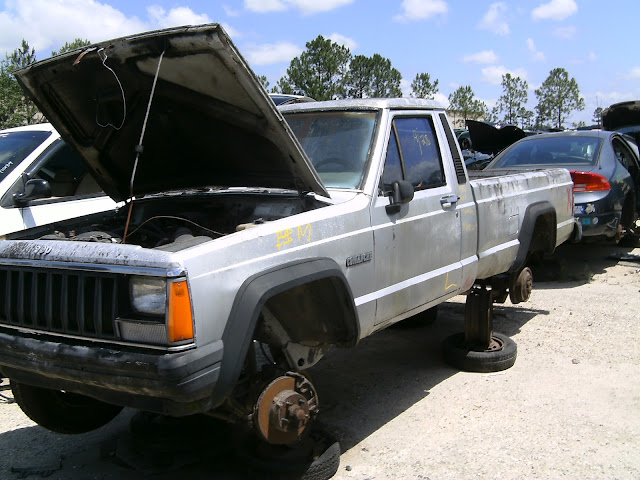 And just because I like to take junkyard images of vehicles I own, or have once owned, I gathered up this image of an old MJ Comanche. The clutch in my Indian is acting up this week and thejeepjunkie had damn well get it fixed before I head to Naples tomorrow for my daughter’s high school graduation on Friday. Yeah my fellow Hoons, this olelongrooffan continues to age. But I do it gracefully. Well, at least that is what I tell myself. 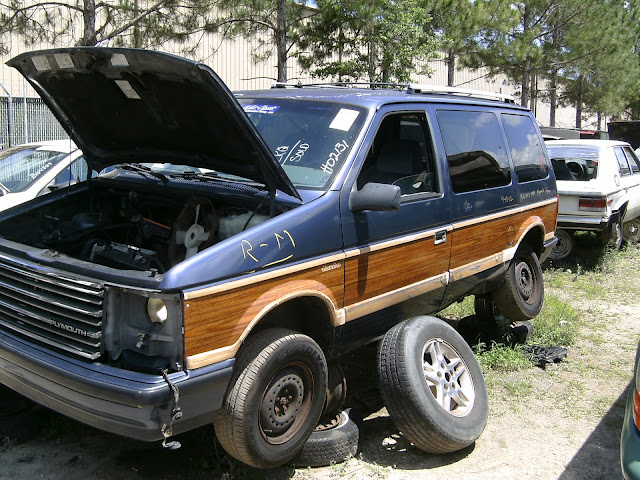 And just because there is absolutely nothing wrong with some vinyl coated goodness, I had to grab this image of a station wagon killing minivan. 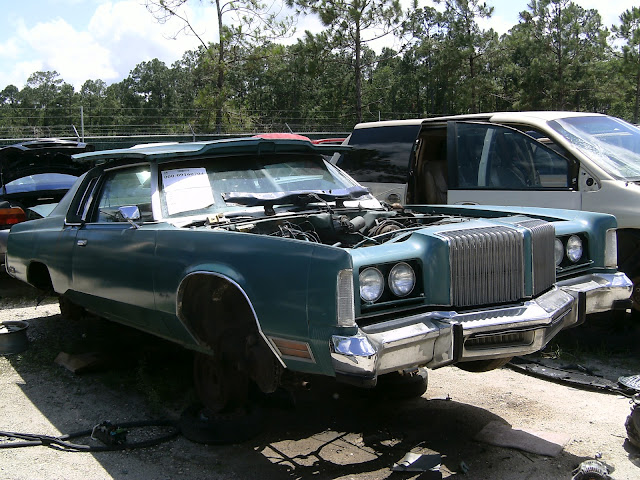 Finally, this olelongrooffan gathered up this image of a mid 70’s era Chrysler produced executive coupe. This thing was nearly a 1/2 mile long and, honestly, was rather pretty as it sat there surrounded by all things beige. Sadly, this yard turns inventory quite quickly so unlike the Austin America I had just seen in that u-pull-it previous, these will all be gone by the time this olelongrooffan returns to LKQ. But that’s okay, this olelongrooffan is confident I’ll see plenty of other cool shit to share with my fellow Hoons. Copyright Hooniverse 2012/longrooffan