Searching for beater cars on craigslist is a favorite past-time of many auto enthusiasts, myself included. The best use for a beater car is the wintertime. Keep that salt and grit off of your nice car and let it collect in something much less precious. What makes a good winter beater, though?

Any drive type is really okay. AWD is probably the best balance between fun and practicality. RWD is definitely the most fun, but you’ll likely be swerving around quite a bit. FWD is boring, but most cars are FWD, so they’re the cheapest and most common. Any transmission will do, I’ll be looking for stick cars though. Not because they’re better–I just like them more.

I’ll primarily be looking for fun cars like coupes and wagons because I like having fun. I’m not going to bring up some rusted-out F250 just because it’s cheap and practical. That’s boring and there are enough boring things about cars to read. I want action! I want action, now!

I will not be including cars that don’t run or have serious mechanical issues.

The final parameter: Does it look good on silver-painted steel wheels? The only real must-have for a winter beater is, of course, winter tires. I’m also gonna keep the price below 1000 dollars. Anything above 1000 dollars is bourgeois decadence.

All of these cars are gonna be one-hundred miles around Philadelphia because that’s where I live. 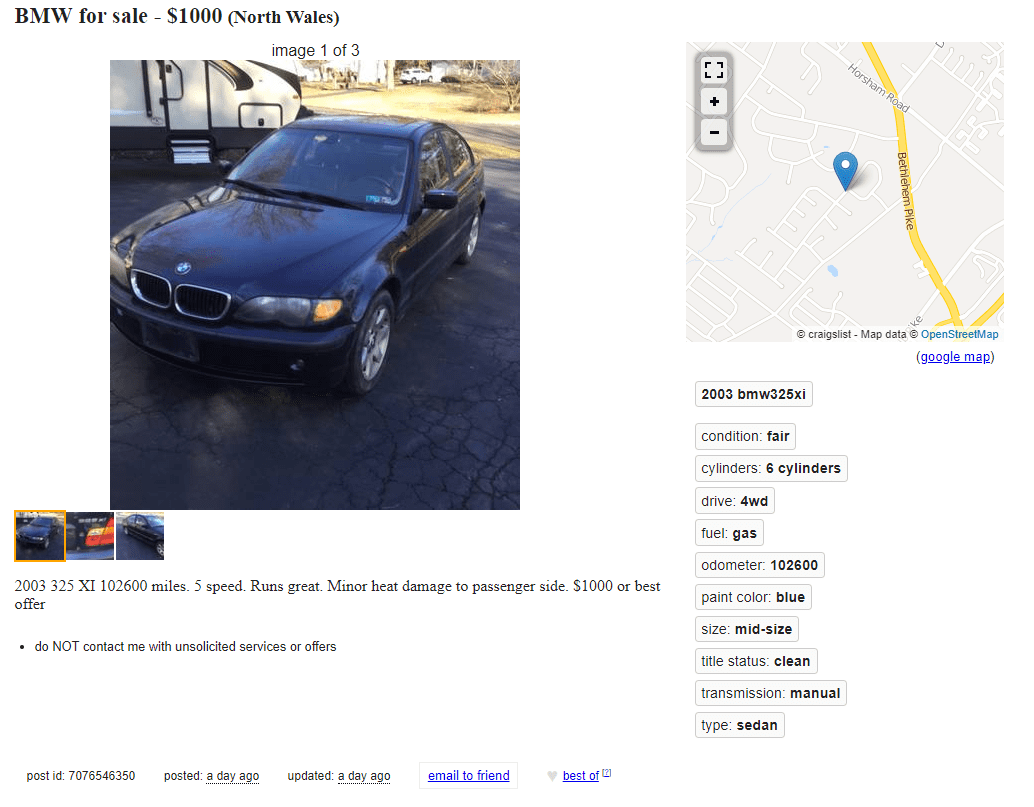 My family has had quite a few E46s (I think around five total). They’re probably the best all-around three series. This one is looking like a deal to me. According to the description the right side of the car has “heat damage”. I’m not sure what that means. 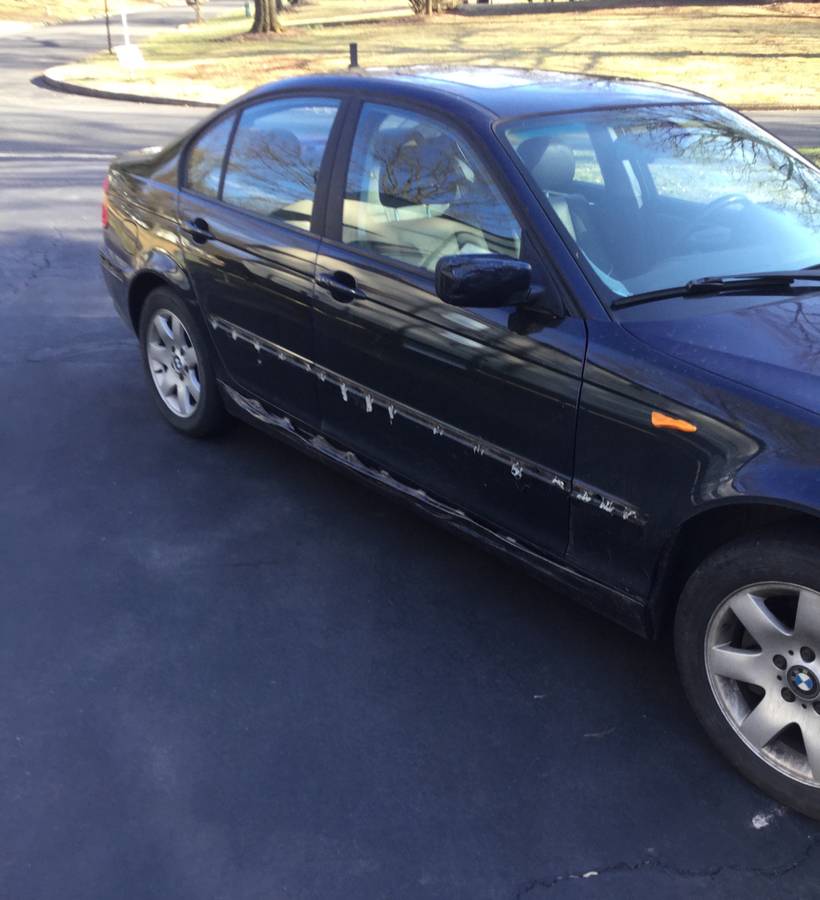 The car only has like 100k miles on it, and it’s a five-speed! For a thousand dollars? I’m not sure why you wouldn’t buy it. There are no interior photos so it may-well be absolutely ruined inside, but it could also be minty fresh. I’d call this car a healthy gamble.

The cooling system on these things typically goes around 100k, though. Several of the window regulators are also likely broken. That really doesn’t matter though. It’s the winter, it’s cold, this car is a thousand-dollars-worth of German luxury. It’s got a stick, AWD, and there’s plenty of space in it. The thing looks like a noble steed from where I’m sitting. 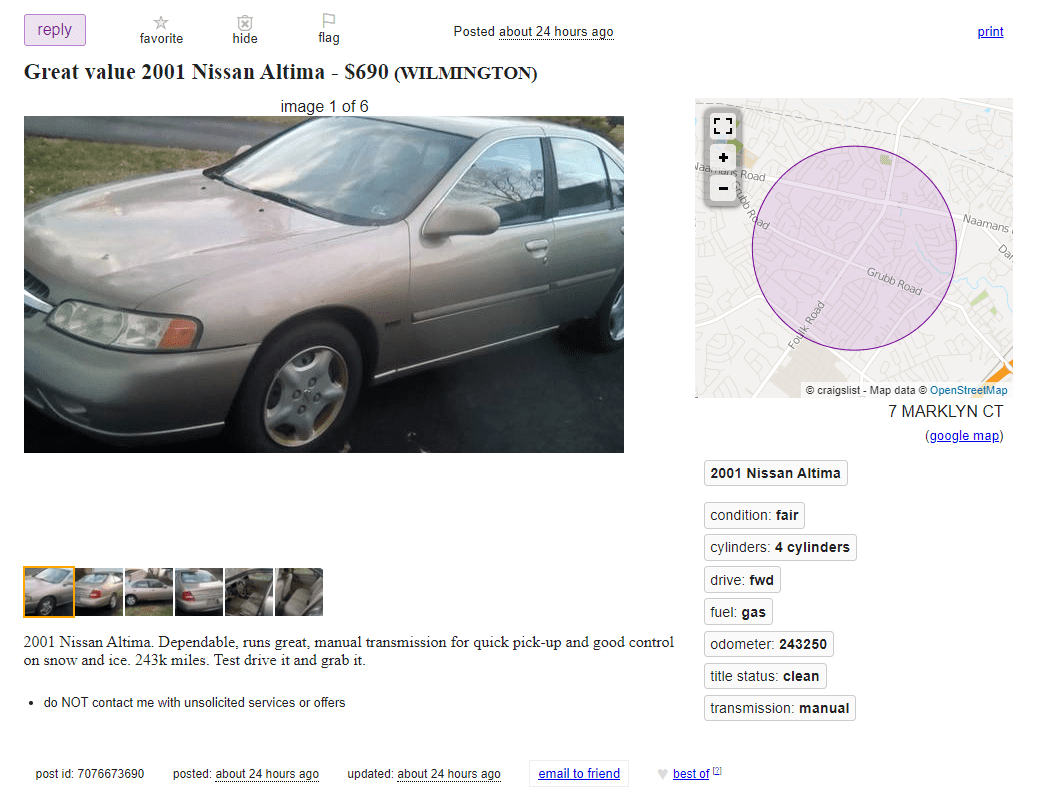 One of my high-school friends rear-ended an Altima in his absolute trash heap of an E36 after only having it for a few days. Good riddance. That car had one of those aftermarket security systems that would totally immobilize it. I was happy when that automatic 325i sedan got taken to the junkyard. We still make fun of him for the whole situation. He’s fine, by the way. Still as stupid as ever. 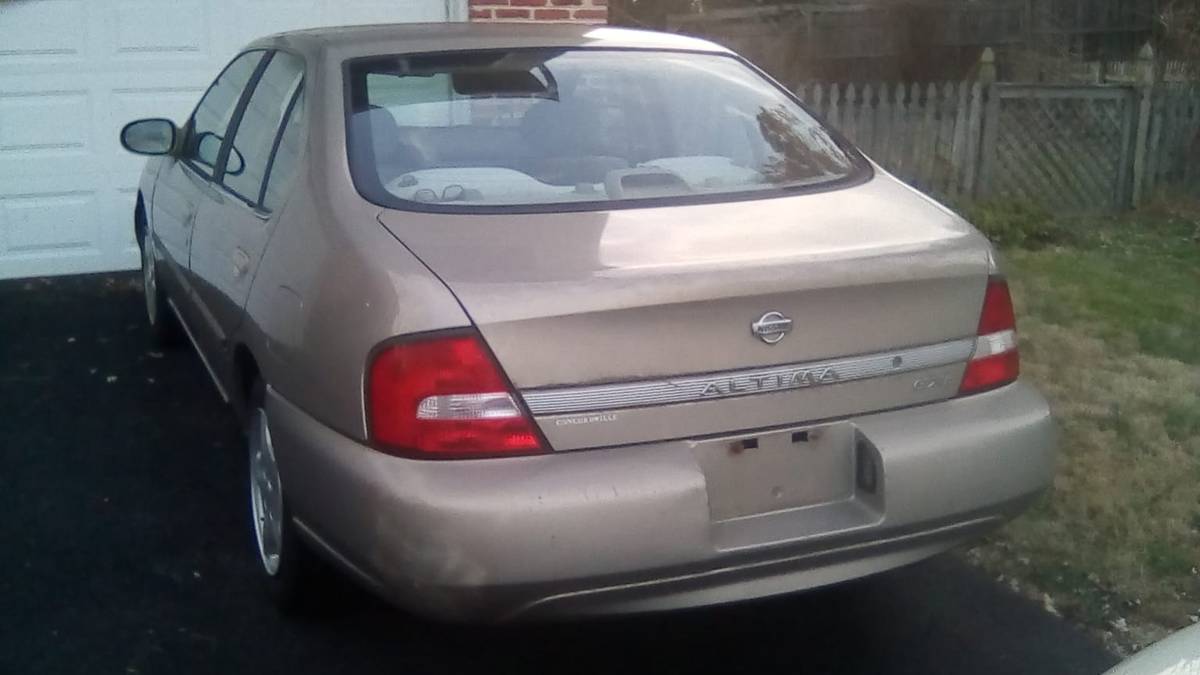 This particular Altima looks–and I don’t say this lightly–like a total sweetie. Seems like it has a bit of rust here and there, but I have a frozen pizza in the oven right now and I’m a lot more concerned about that.

The mileage is high at 243k, but all that could possibly mean is that it has a few new parts a burns a little oil. If you look carefully under those plastic hubcaps you can see some steel wheels peeking though. A little silver paint and we’re in business.

I also like the way the owner talks about this car. He even suggests it would be a good winter car. He wants us to test drive it, “and grab it.” He would probably take a little off the price if he liked the cut of your jib.

Toyota pickups are pretty legendary for their reliability. This one in particular looks prepared for combat. I think I’ve seen this truck in a few Syrian civil war Youtube videos. 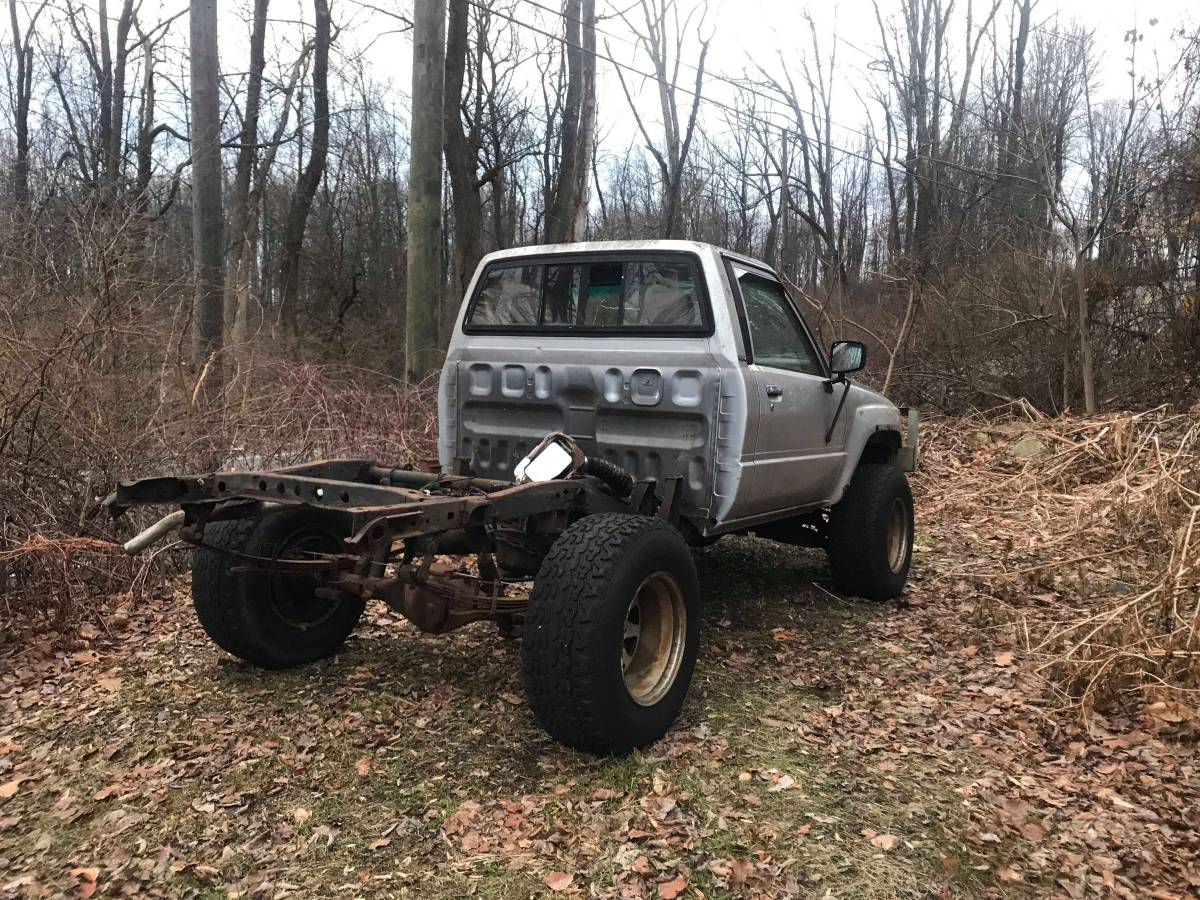 The owner, Ron, says the frame is “rotting out.” I’m not sure I believe you, Ron. Not only does that just look like scale, I think a little bit of booger-welding and flat stock could greatly extend this vehicle’s life.

The wheel and tire situation looks pretty good. Nice big sidewall to soak up those dirt road potholes. The cab looks clean, too. Only some minor rust. 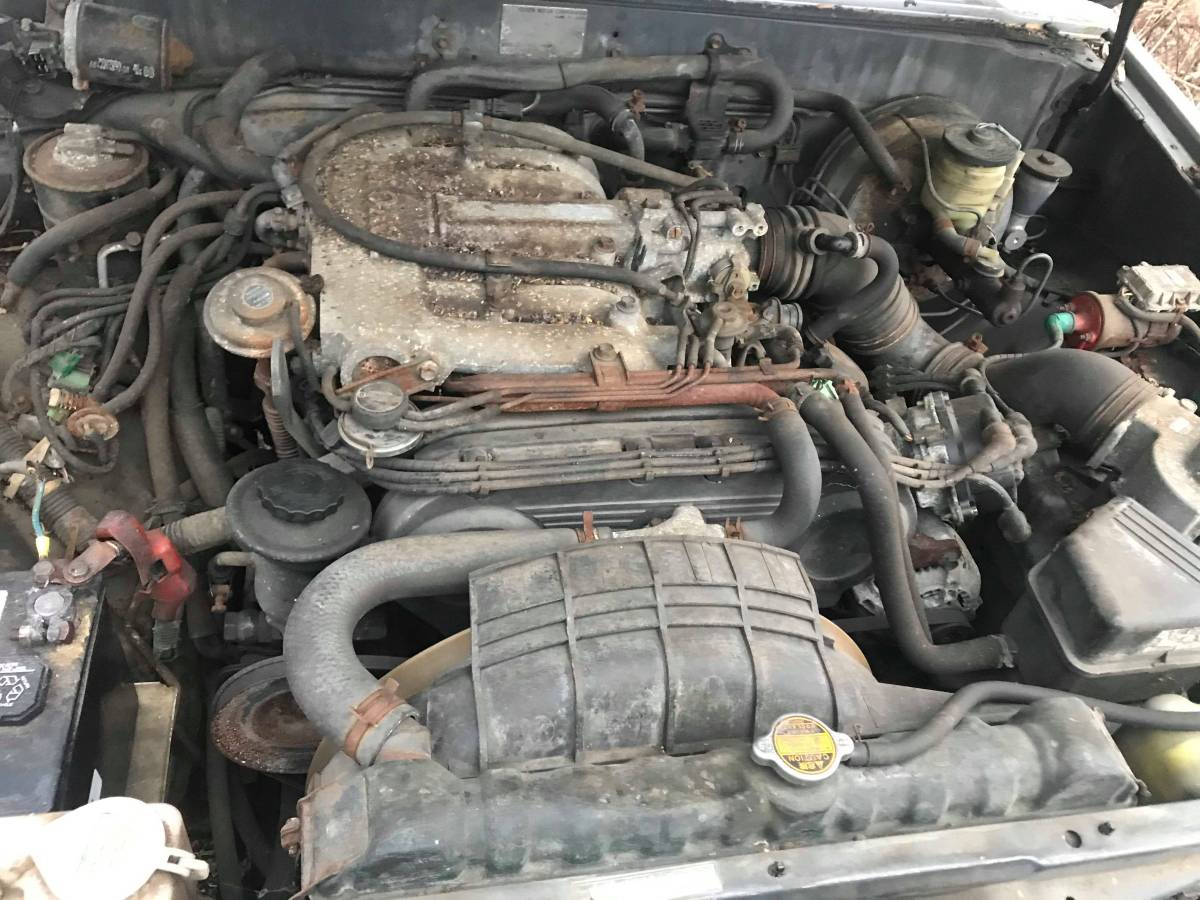 The best part is definitely the engine, though. Looks like some organic material has taken up residence on the intake manifold. That’s typically a good sign an engine is well-loved. For five hundred bucks, I would say this is about the right price.

The first-gen X3s were available with a 6-speed stick. Weird, but actually not extremely rare. Strangely enough, a fair amount of people bought them. 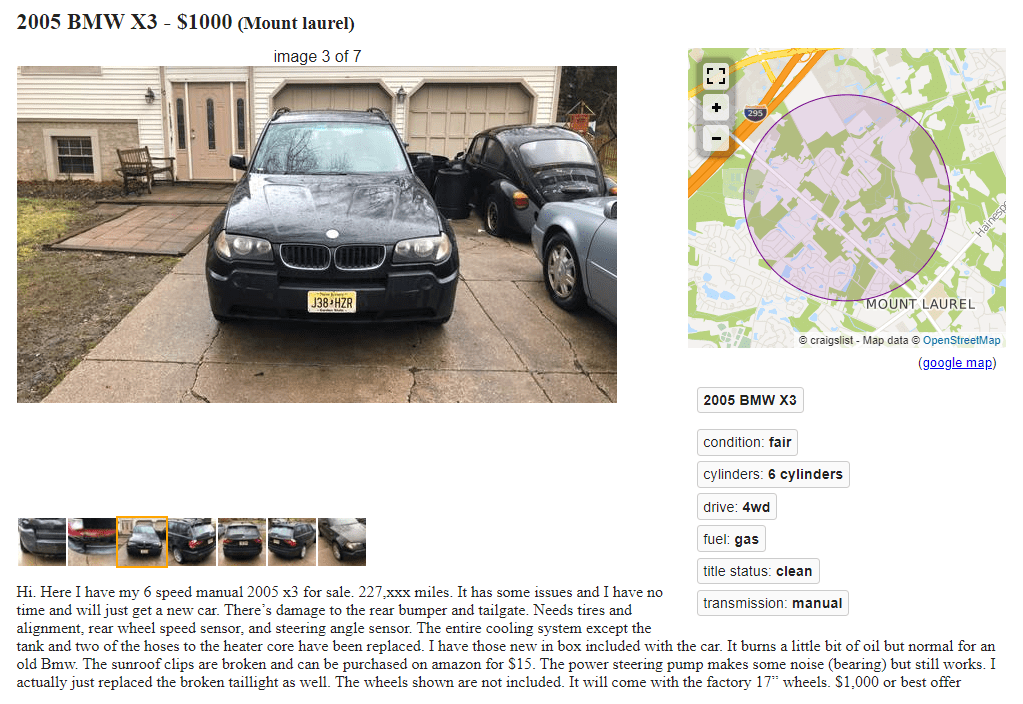 I think this particular X3 is a 3.0, but I’m not absolutely certain. You may be tempted to jump all over of this thing, but I really would not go anywhere close. The car looks like it was rear-ended, and just by reading the vehicle’s description you can tell this thing has absolutely had it. 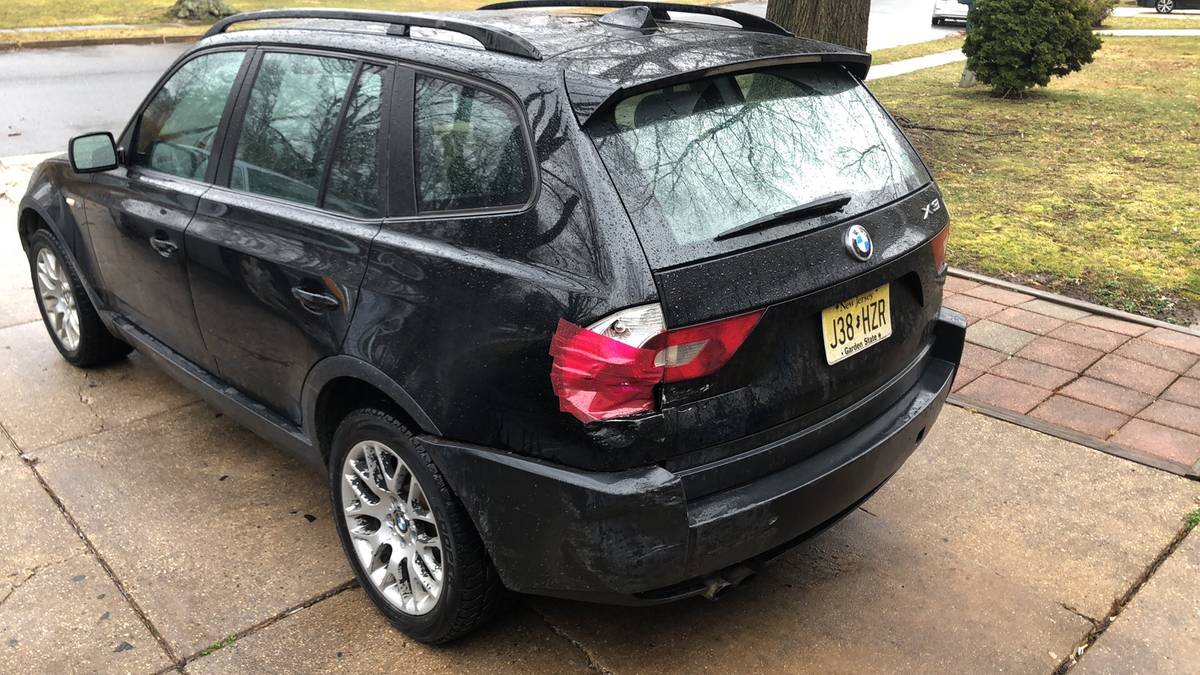 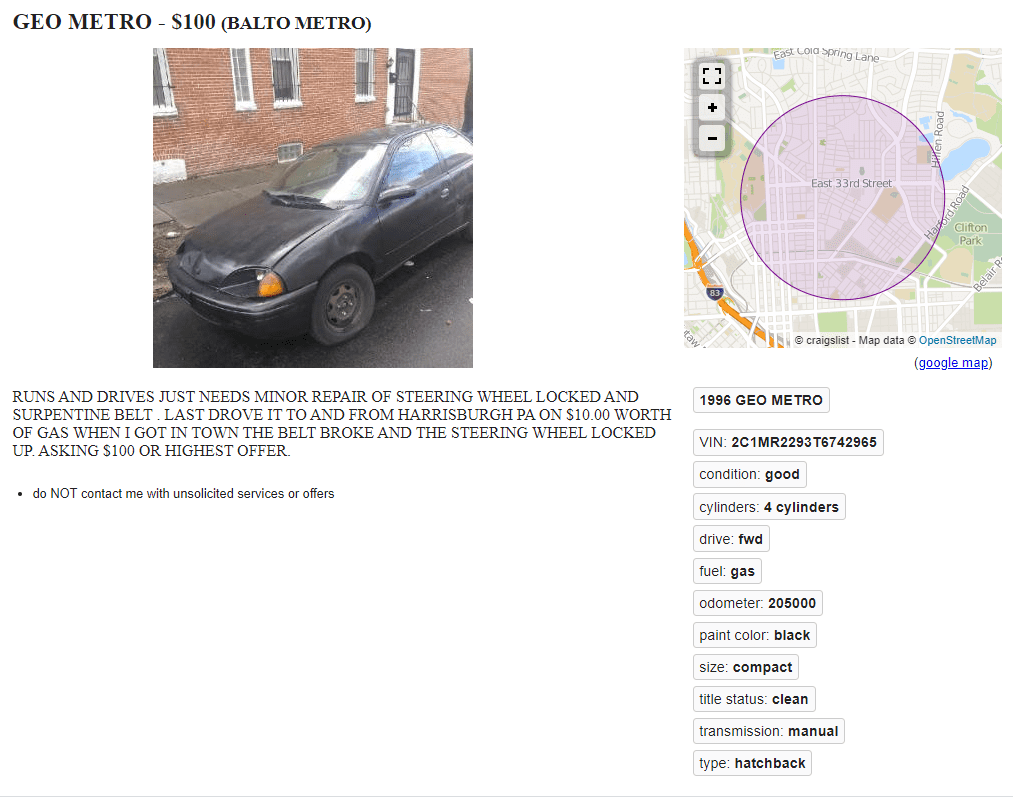 For a hundred dollars, I’m not sure how you could really go wrong. This is the ideal winter beater. This thing apparently only needs a serpentine belt to get going again. There’s only one picture, but I think that’s what we paid for.

It appears to have one slightly soft tire–the front left. One of my friends pointed out that your insurance may well total the car if you wanted them to replace it. Very interesting.

This honey of a car is located in what appears to be a very bad area of Baltimore, so getting this thing would be something of a quest. I would do it just for the good story, and the owner could probably be talked down. He seems only slightly literate. 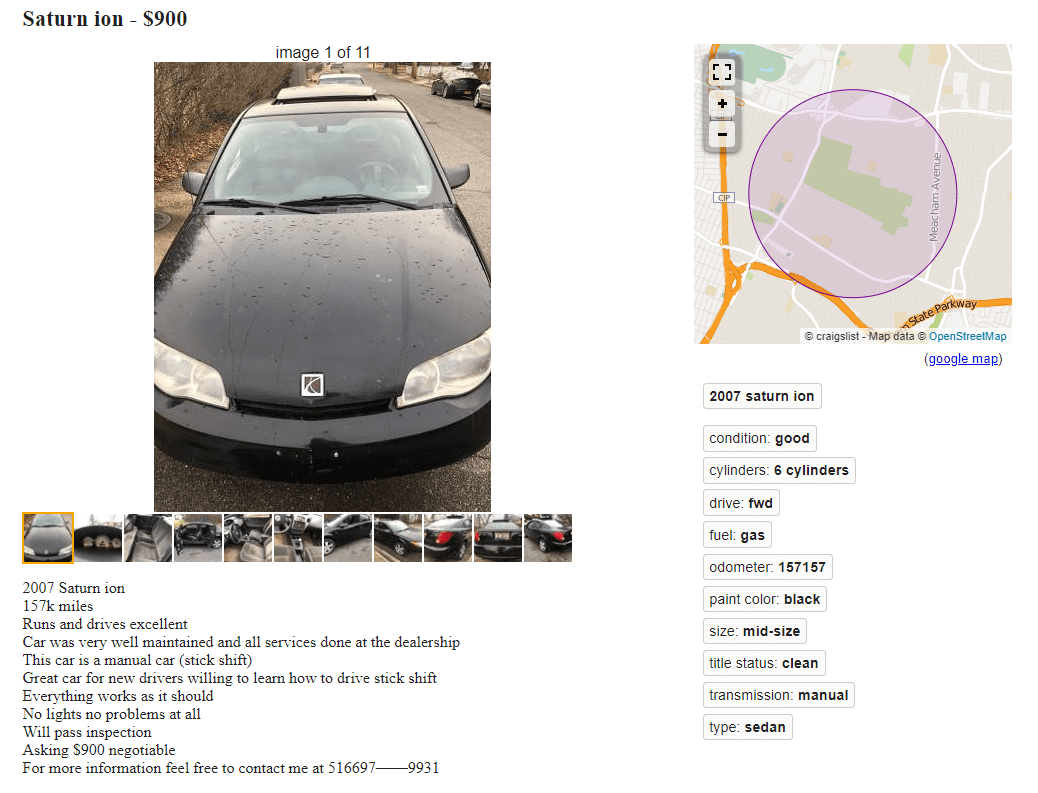 The last car on this list, and probably the best all-rounder, is a Saturn Ion. The owner claims it’s a six-cylinder car. Every Saturn Ion had an inline-four. 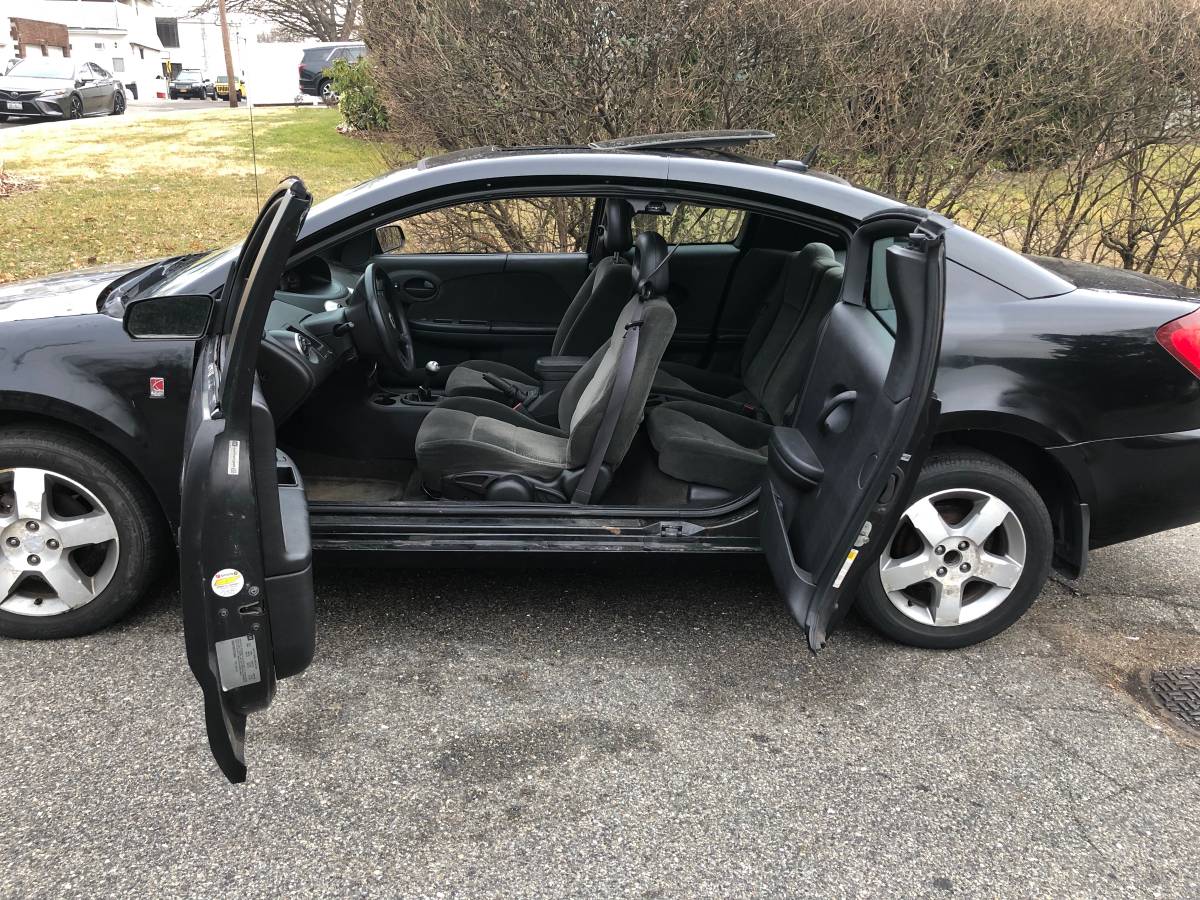 The interior looks like it’s in great shape. Take a look at those rear buckets with the nice big cupholders in the middle. It makes me excited–a little too excited. 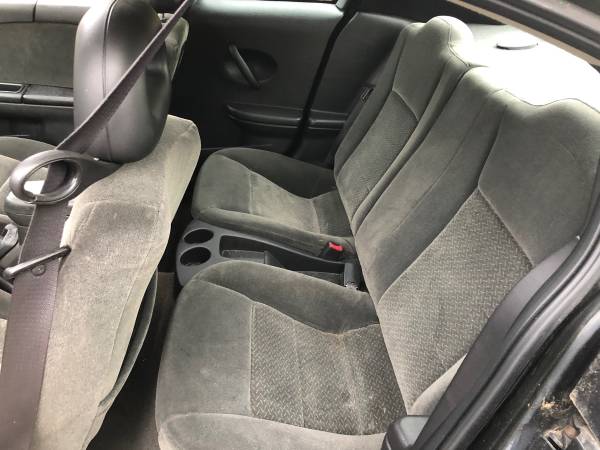 The wheels are also in great shape. They’re machined five-spoke alloys. They gotta be at least fifteens. 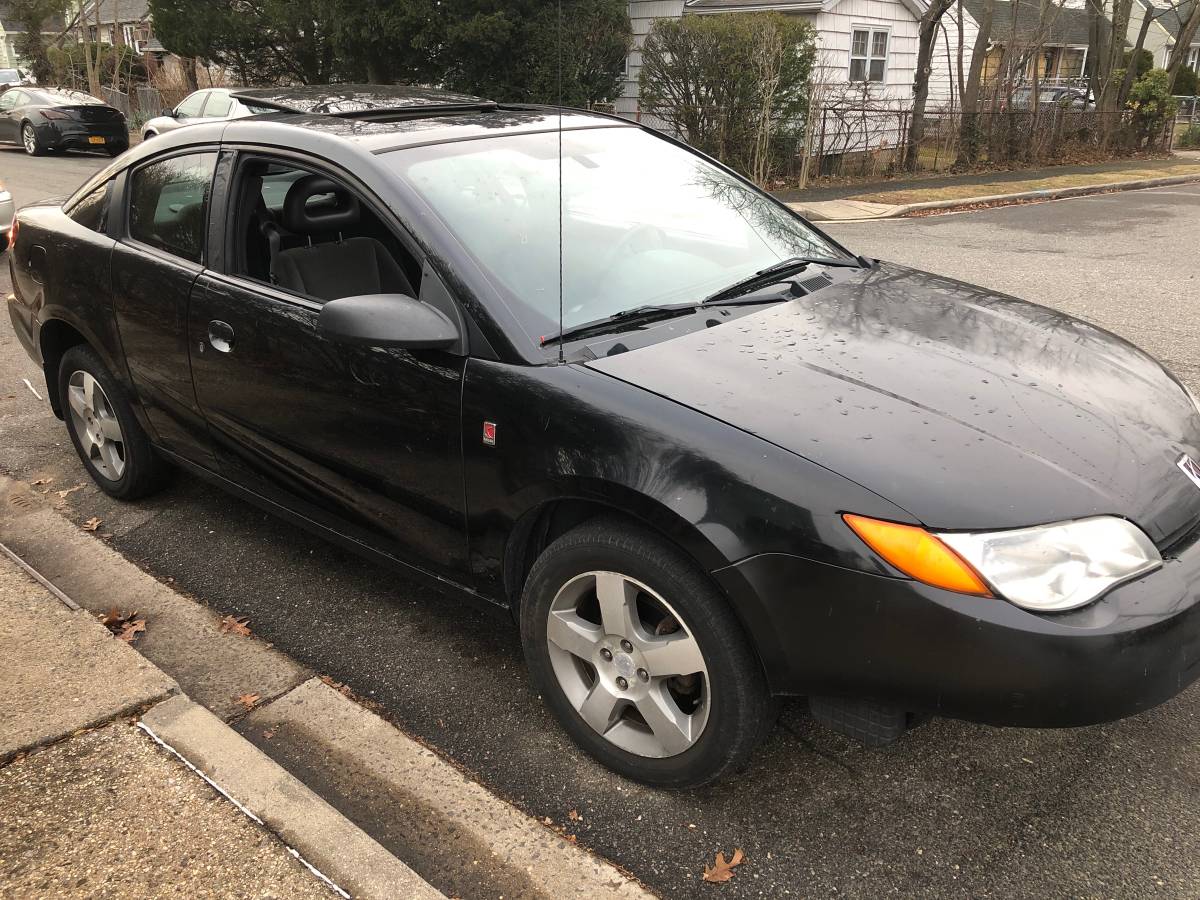 At 157k miles and only nine-hundred bucks? It sounds like a steal to me. Looks clean as all hell. I would happily drive this car for a few months and then mow around it in my yard.

All of the Subarus in this price range had blown head gaskets or spun rod bearings. The owners of these cars also all seemed like… assholes. Kind of like boomer-types who “knew what they had” and didn’t seem like they really wanted to sell their cars (even though they were all under a grand). I don’t think I would get along with them, and I think they would take issue with my affinity for Coors Light.

You should be fine with the assortment I’ve prepared for you anyway.