A Caturday of a Different Kind 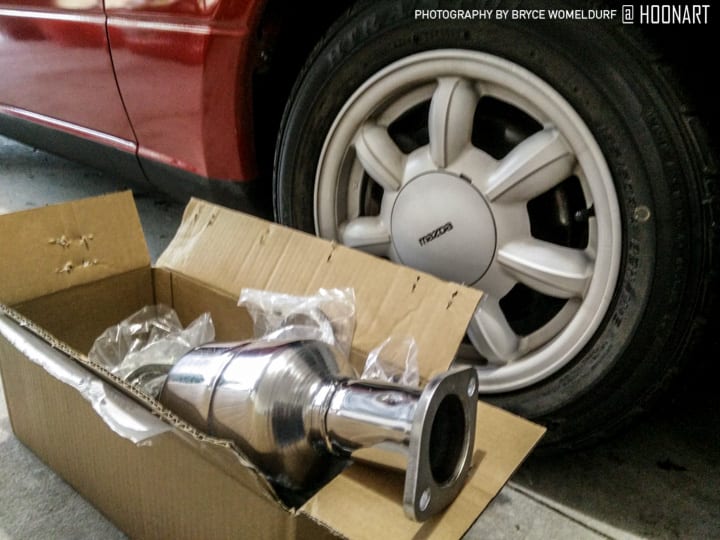 When we last left off with our little red friend, Roadster, the Miata, it had run for two years with a slightly rough idle surge that had suddenly gotten much worse to the point of stalling at the end of September. After weeks of research, I was convinced that I knew why it was stumbling to idle correctly and why power was down so significantly. The idle was rough and the car felt like it hit a head wind at 4000rpm where it would struggle to reach 5500rpm and would then refuse to go any higher. What seemed like choking, I reasoned, could only be caused by a clogged catalytic converter. There were no apparent vacuum leaks, and the spark plugs and ignition wires were practically new, as was the timing belt, which I had installed only a few months prior. All of the inexpensive alternative solutions seemed to be ruled out, so it seemed that it could only be the cat. Being a little thin on cash when these symptoms appeared, I examined my options. The search for the right cat had begun. 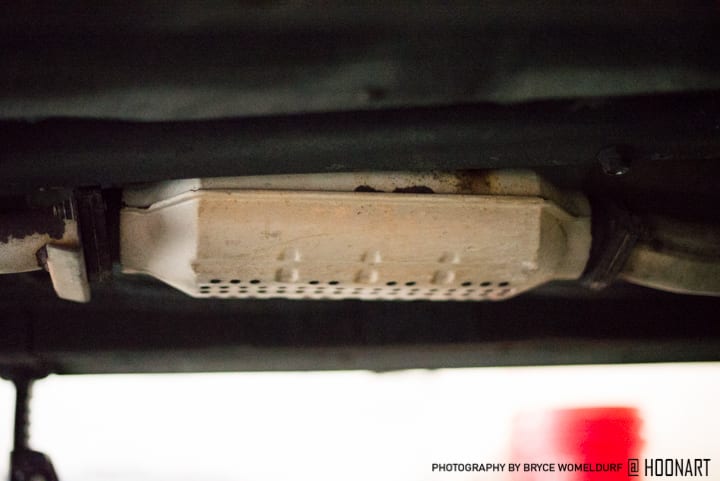 Why Even Bother Replacing the Catalytic Converter on a 21 Year Old Miata?

Before we get into what cat I chose, someone will undoubtedly ask why I didn’t just remove the old cat and install a test pipe. I’ve always tried to leave the emissions equipment in place in my cars despite not living in California or even in a state which currently tests emissions. The gain (or possible loss) of 1 or 2 horsepower is in my opinion not worth the damage to the environment nor the accompanying smell and nasty rasp sound that would have come along with it. The sound of a stock Miata is a wonderful thing to my ears, only improved by the likes of Racing Beat. Therefore, I was stuck for a little while, saving up for the new cat. There were inexpensive options, but some folks claimed that they only lasted a year or two and were not great for long-term reliability. By January, I finally made my decision and ordered a RoadsterSport high performance catalytic converter. 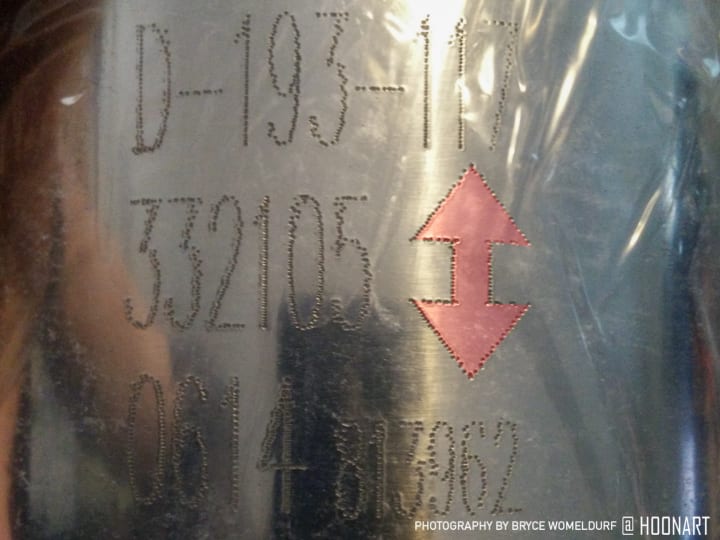 Determining flow direction on the new cat was a little confusing with this double headed arrow. I ended up just lining it up next to the old cat to figure it out. The more bent end points towards the front.

A Caturday of a Different Kind

After returning from Rolex24, I finally had a free weekend to work on the car, that being  Super Dull weekend. It would be the ideal weekend to fix the car and go out for drive while everyone else got off the road to watch the big game. The work began with hopeful optimism on a Saturday, or Caturday, rather. 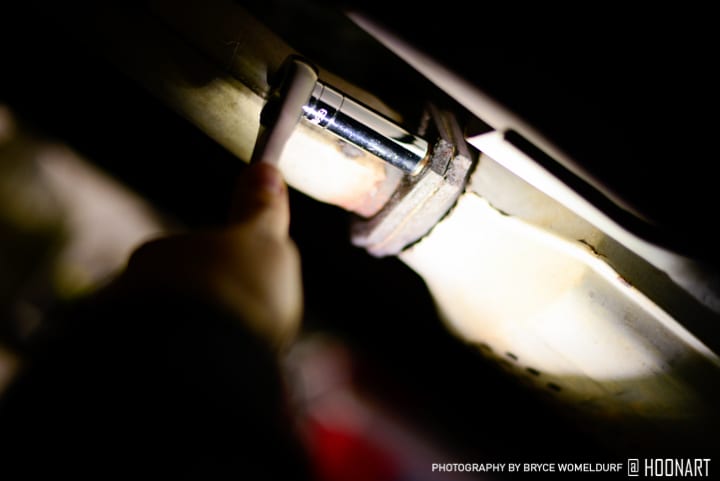 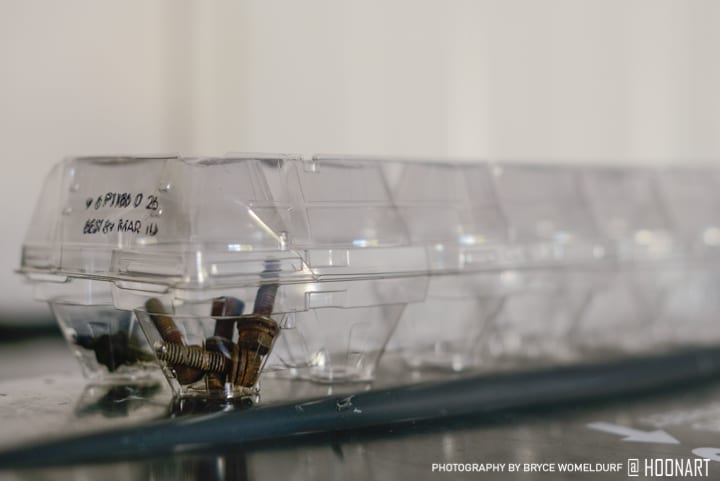 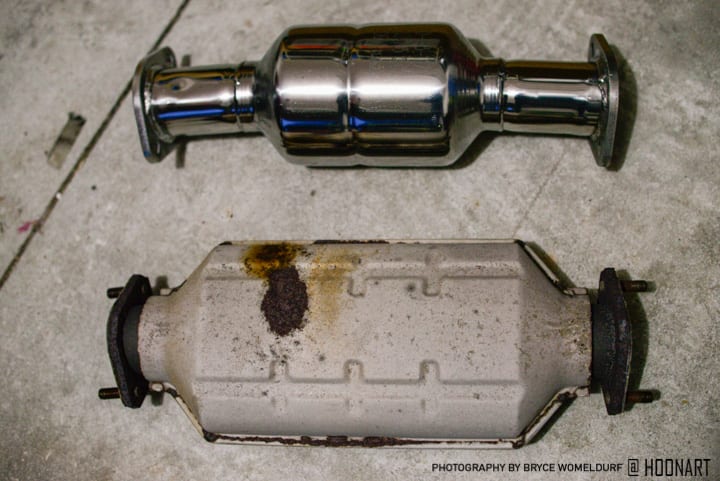 An old can of PB Blaster, which I’d had for over 12 years, gave up it’s final bursts of propellant spraying penetrating oil on the fasteners of the old cat, and all four nuts came off fairly easily. A half hour later, the shiny new cat was in place. Excited, I jumped into the driver’s seat to start it, and… it still took four or five tries to start. “It must be from the car sitting so much,” I thought. Once it started, things still didn’t sound right. Still running rough, still down on power. It felt slightly better and revved more easily, but something still wasn’t right. With hopes crushed, I gave up for the night.

Not so Superb Owl Sunday

If things had gone as planned, this would have been two posts. The car would have started and run right, and this would have been part of a separate post where I spent Superb Owl Sunday avoiding handegg and flying around Tampa in the Miata, enjoying the car for the first time since the end of September. That, however, would have to wait. 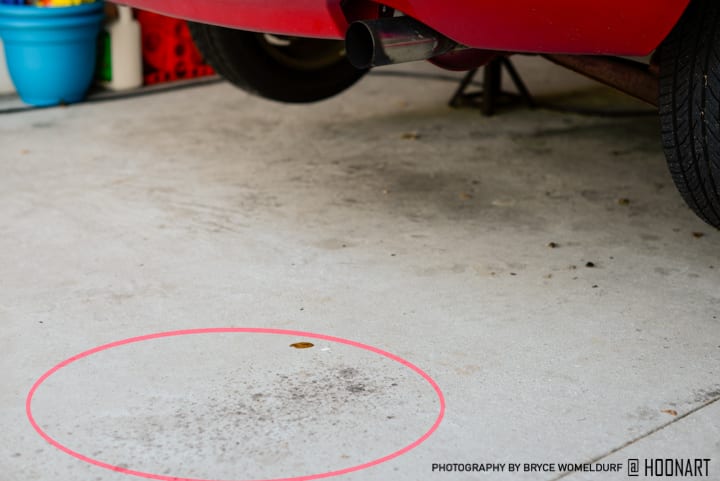 In hindsight, spitting fuel was probably a good clue of it having a timing problem. 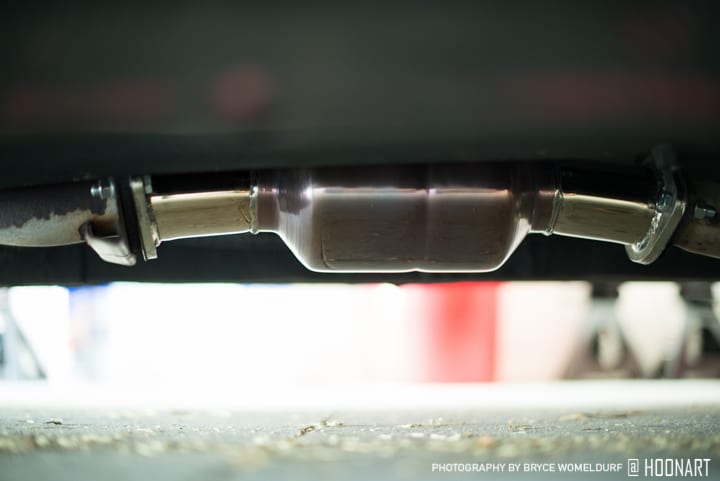 With the new cat in place, we find that the bends actually point in the opposite direction from how you would think that they would go. It probably works to keep the catalytic converter out of danger from being hit by speed bumps.

Unsure of where to go next, on Sunday I reassessed what I had on hand. I still had intake cleaner from when I had previously tried to clean the idle speed control valve. Should I take that apart and give it a more thorough cleaning? What about the intake itself? That must be dirty too, which could cause rough running and a loss of power. Since the mass air flow sensor was at the beginning of the intake stream and I also had MAF cleaning spray, why not start there? I sprayed out the MAF, let it sit to dry and then plugged it back in. And… it still exhibited the same symptoms. In a last ditch effort to get the car running, I jumped in the Rabbit and made a few trips to the local parts shop for various sizes of hose to replace an original hose that went from the intake to the brake booster, which had previously cracked slightly. No dice. It ran the exact same way.

A Good Mechanic is Worth Their Weight in Gold 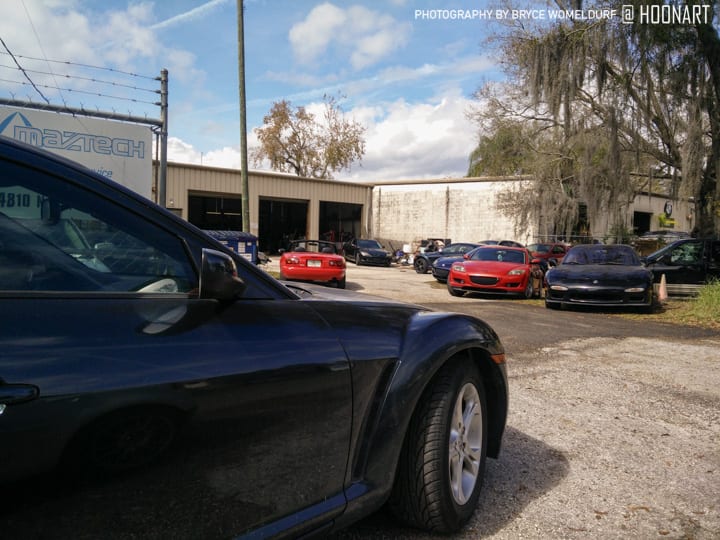 Months ago, when I’d driven the Miata into a parking lot, I’d been approached by a man who recommended a Mazda specialist shop to me, for whatever I’d need in the future. He’d been taking his Mazdas there for years. The car was running great at the time, so I thanked him and saved the business card of the place. Sunday night, I remembered this card and dug it up. Maztech was the name. Reviews online sounded good, so it was definitely worth a try. On Monday morning, I called them up and described the problem. They could check it out that afternoon. When I arrived, the yard of Maztech was covered in rotary Mazda sports cars of the past, from the SA-generation RX-7 to the last RX-8, even an FD. This was a good sign. Not that my Miata is rotary powered, but if they were this well versed in the… well… soulful but less reliable rotary engines, a conventional 4 cylinder Mazda BP engine should be a piece of cake for them to diagnose. A few hours later, I was relieved to hear that they’d found the answer. You see, at the end of 2014, when I’d taken the timing belt off to replace the leaking cam seals, the gaskets for the timing cover were oil-swollen and broken, so I had replaced them with new OEM pieces. Something wasn’t right with those new gaskets, because despite being the right shapes, they didn’t fit the dimensions of the timing cover exactly right. To make it work, I had trimmed and glued the gasket into a smaller, better-fitting size, or so I thought. Jeff at Maztech found that the gasket had come loose from the cover, probably in my last run across the bridge to St Petersburg, and had jammed itself between the timing belt and the camshaft gears, causing the timing to be thrown off. He’d said that it was a wonder that the car ran after that at all. He removed the gasket for me and reset the timing. The telling symptom, which I had missed, was the way it started, or didn’t start, at least not right away. Pulling away to head home, the car ran better than it has since I bought it three years ago. The rattle that it’s had since I bought it is almost gone (new heater grommets will cure that), the hand brake suddenly works, and the car just seems to pull with much more power than it has previously. I’d be lying if I said I wasn’t impressed. 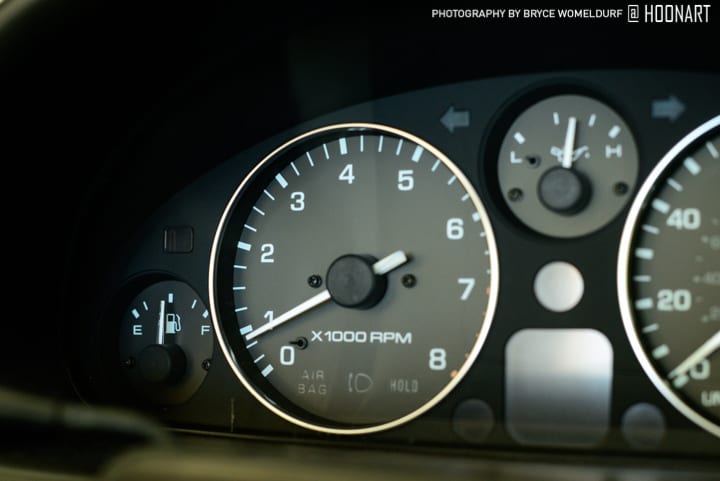 Rock-solid stable idle has been attained!

So, while I missed the best driving day of the year, I gained a new go-to Miata repair shop. I’d say that’s a win. They did so well last time that by the time this post is published, I will have sent the car back to them on Friday, for the air conditioning to finally be repaired, after three years of ownership with it not being functional. Better to knock it out now before the Florida heat and humidity returns. We’re finally getting the car to a solid baseline status, where I wanted it to be three years ago, when I bought the wonderful basket case. The idle is now rock-solid and steady, and the timing fix (with the new cat likely contributing as well) has given it more power than it’s had in years. Where to go next? I have a few motorsport events that I’ll cover first (Daytona 500 and 12 Hours of Sebring), but autocross is definitely on the agenda now for this year. With the car now being much more mobile, comfortable, and dependable, Cars n’ Coffee and Tampa Bay Miatas meets are now a must. Check back with us soon!

About the Author: Bryce Womeldurf