The Lexus ES has a rather beige history. Dating back to 1989, it was typically just seen as Lexus’ version of the Camry. Not a bad thing, but certainly a bit beige if I’m honest. If you wanted a “good car” with a bit of luxury, it was a solid choice. But the front-engine, front-wheel-drive sedan was never particularly pretty or interesting. However, when the seventh-generation Lexus ES was launched in 2019 that changed. With a bold new design, it was certainly trying to separate itself from its Toyota cousins, so much that it’s not even based on the Camry anymore! I’ve been driving the newest ES, so let’s find out just how un-beige it is. 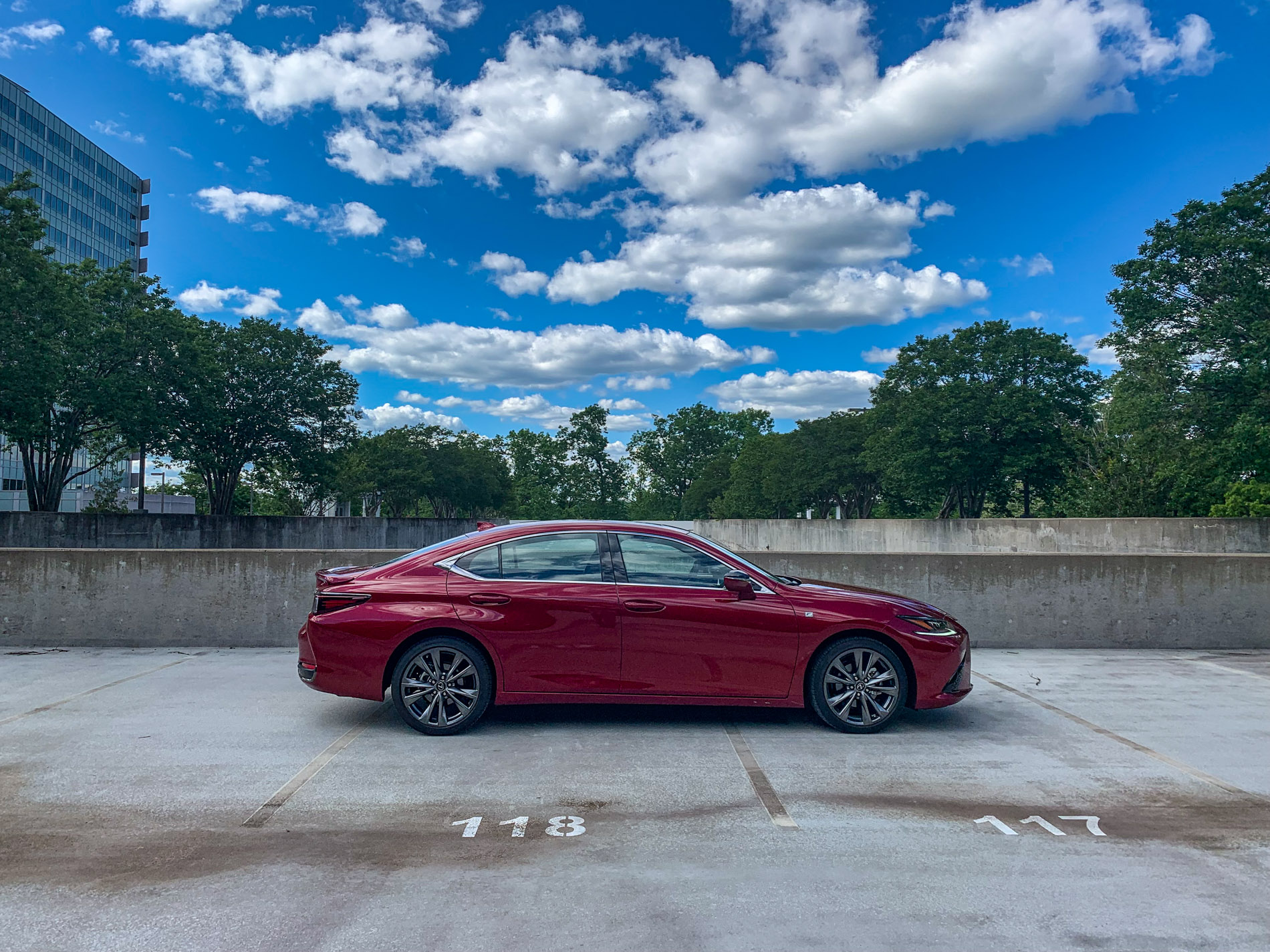 The ES is actually based on the Toyota Avalon vs. the Camry, which started for the ES’ sixth generation. Quick trivia, “ES” stands for “Executive Sedan”, did you know that? I didn’t. So, assuming Wikipedia is accurate (should be…right?) I just bitch slapped you with some knowledge. The latest iteration of the ES is the first to use Lexus’ F-Sport package. It was added to attract younger buyers, and I’ll admit it adds a bit of edge to what has typically been a fairly bland car.

For 2021, you can choose from a handful of trims for the ES 250 including the base ES, F-Sport, Luxury, Ultra Luxury, The ES 350 is basically the same, but you can get an F Sport Black Line Special Edition. Naturally, there is a Hybrid version that comes in base, Luxury, and Ultra Luxury.

Here’s how our test car was optioned. 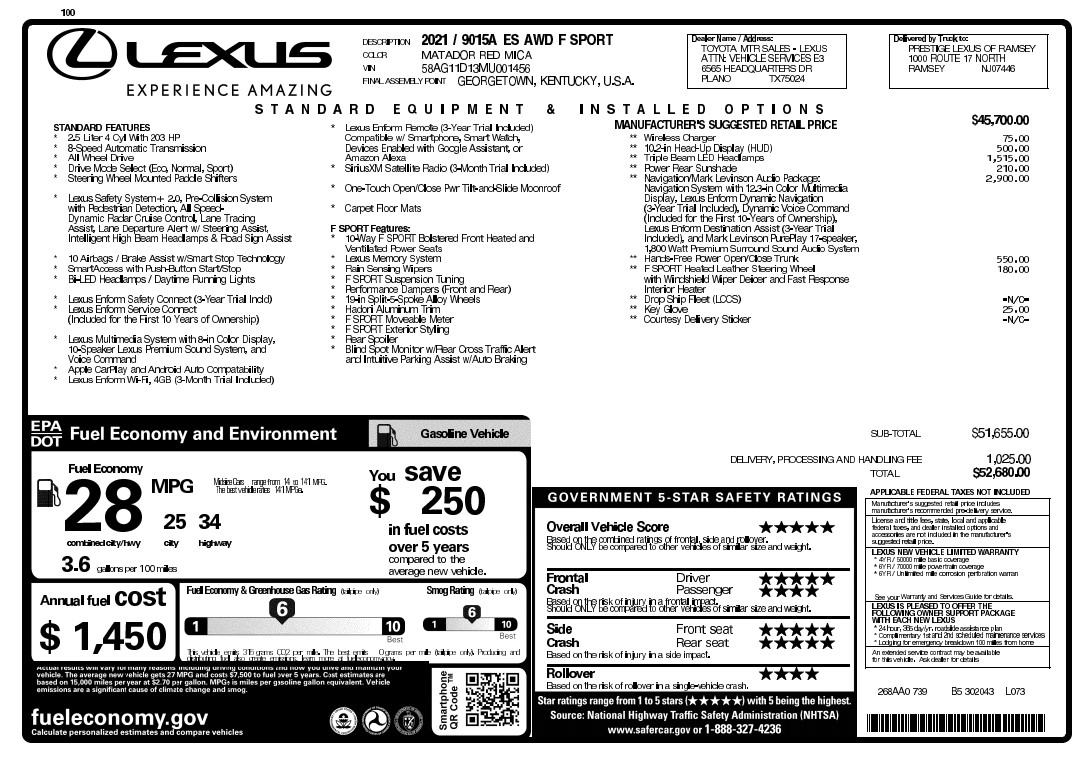 The $45,800 base price is pretty solid, but what’s interesting is that you can get an ES 350 F Sport starting at the exact same price. However, and this is odd, the larger engine is FWD only, while our 250 F Sport tester gets standard AWD. Puzzling, more on that in a bit to find out if it’s worth it. Anyway, our pretty Matador Red ES had a slew of options added which brings the total north of $52,000 out the door. Not inexpensive, but compared to some sedans I’ve tested, it feels like a lot of car for the cash. 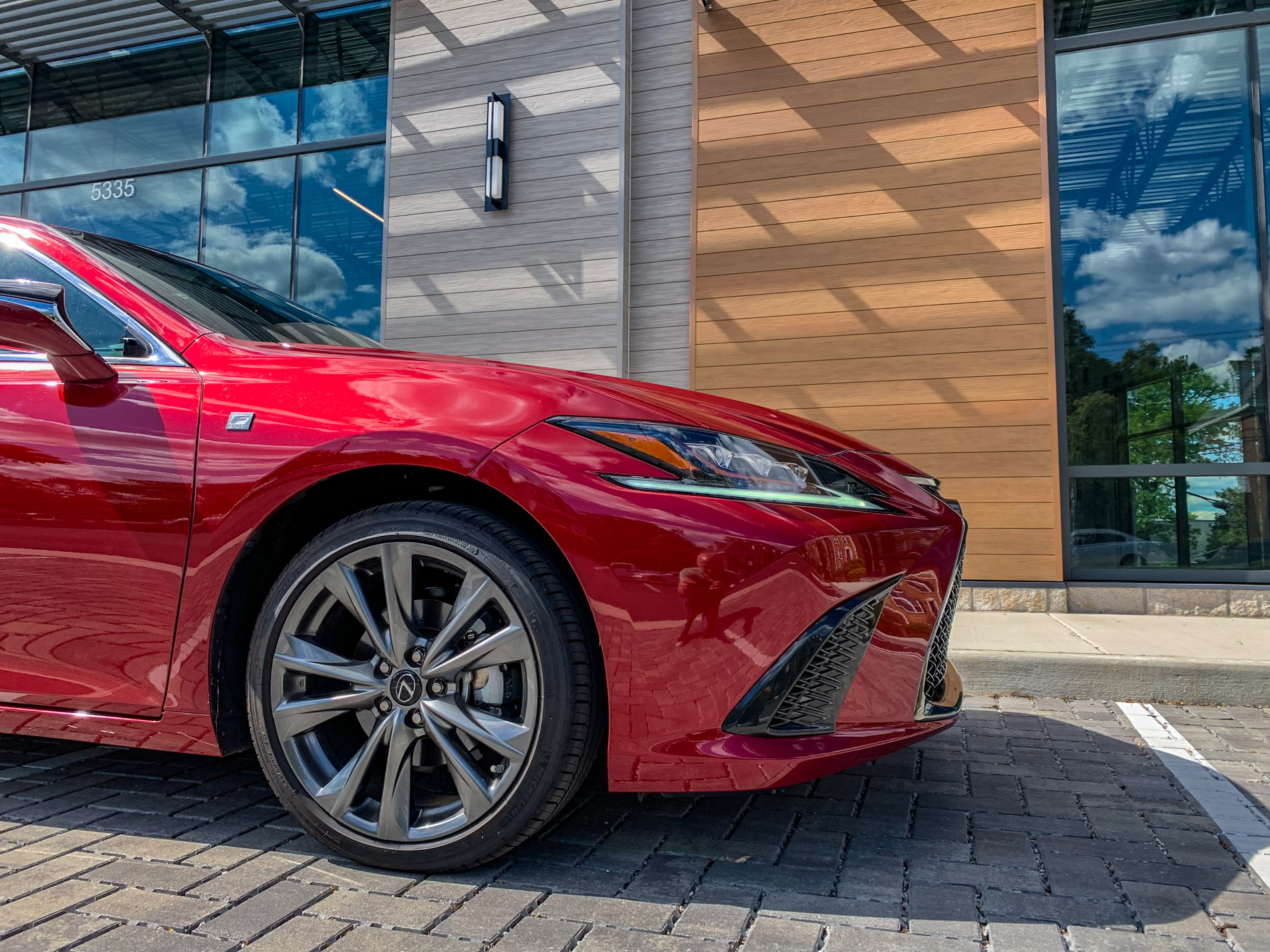 Having also tested the top of the heap Lexus LS recently as well (review coming) it’s clear that Lexus did a <CTRL> <C>; <SHRINKY> <CTRL> <V>. Especially from the front, it’s hard to tell the difference between the two cars, the ES is naturally smaller. If anything, hatred of the big ole Lexus grille has likely lessened after BMW’s recent “hold my Weihenstephaner Hefe Weissbier” grille moment. 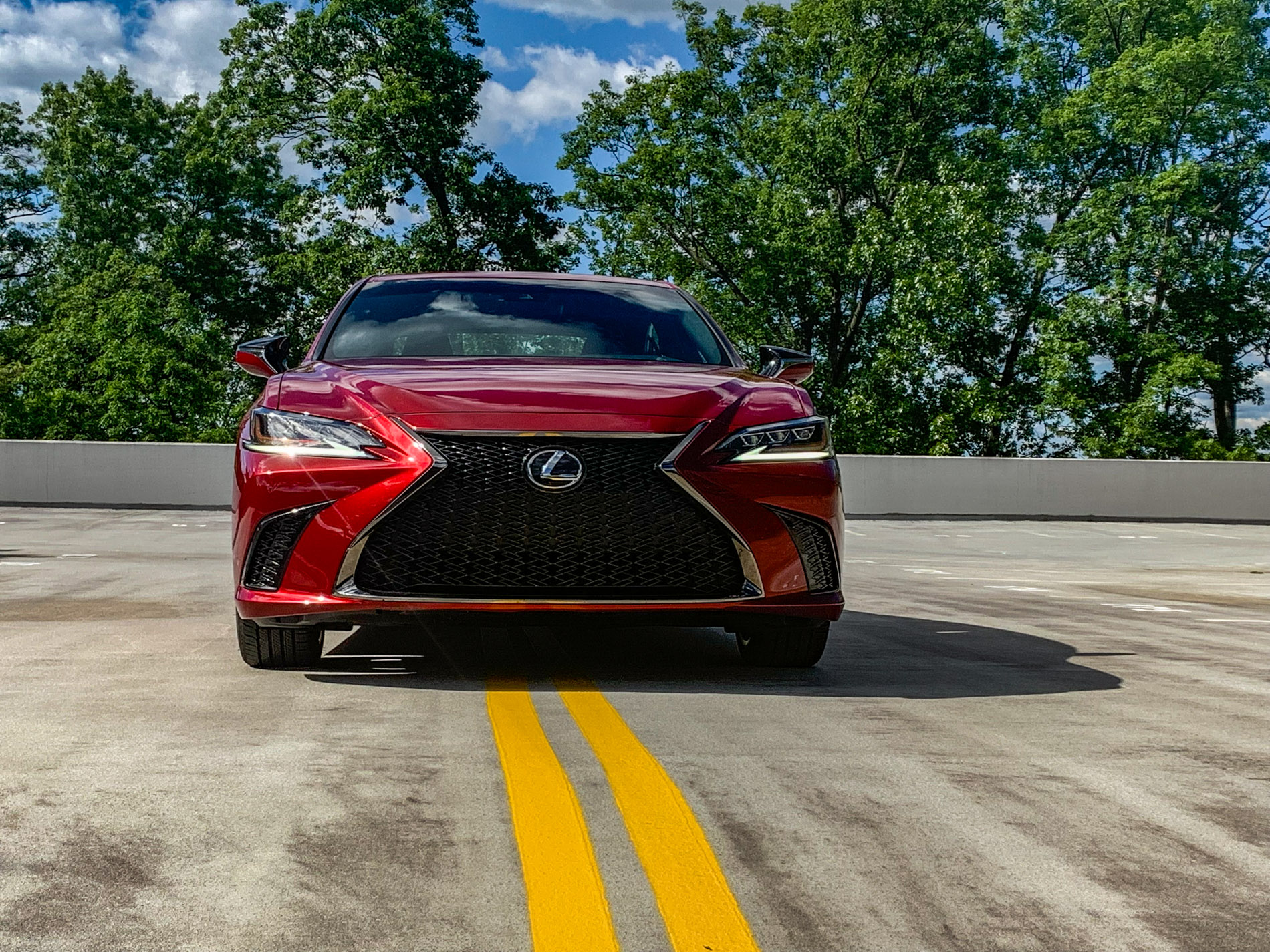 The front is certainly the most interesting angle. From the side, it’s a fairly normal-looking sedan, and the rear is a little under styled in my humble opinion. Those clouds look cool though. 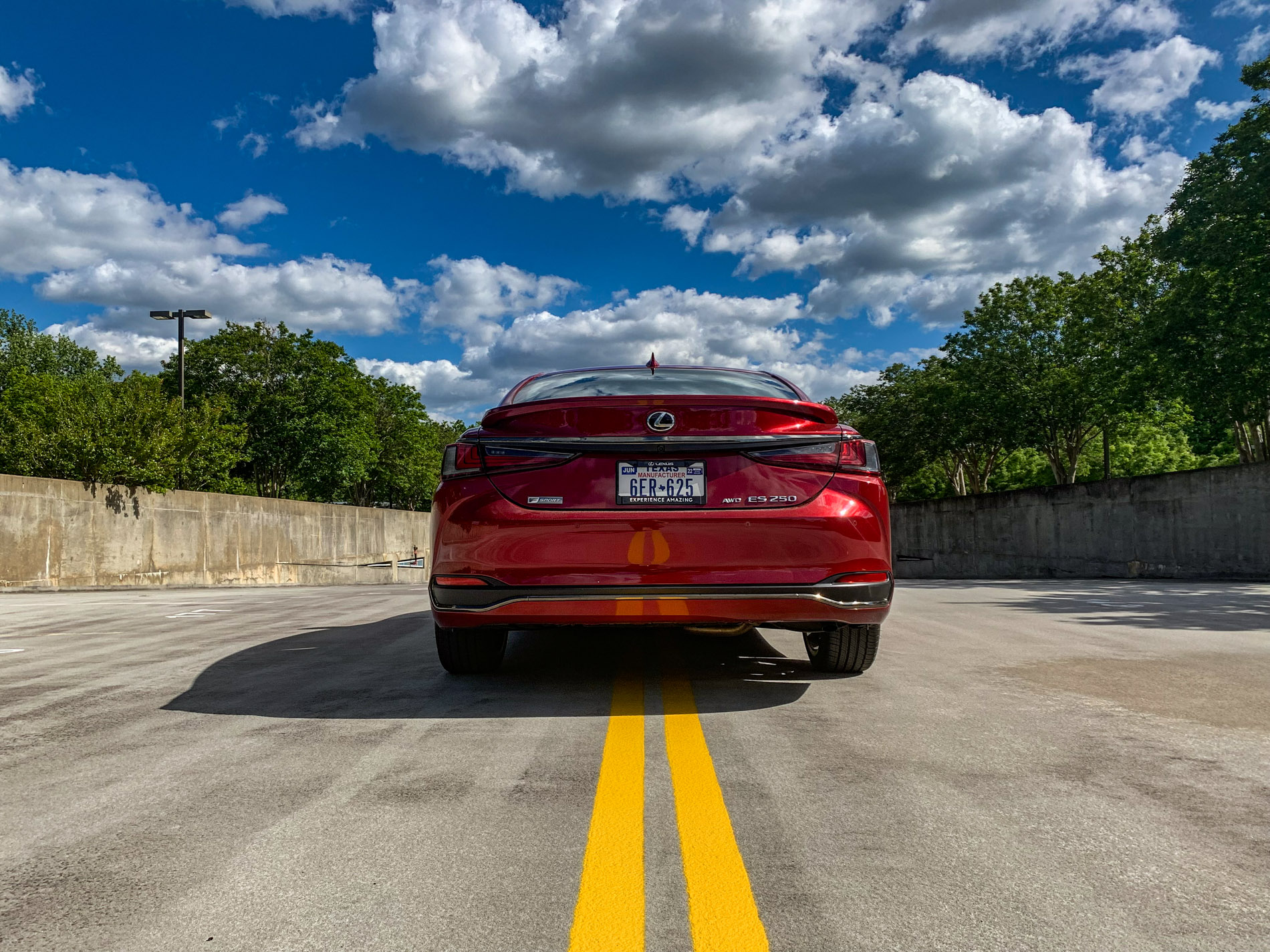 Honestly, the average ES driver will be much more interested in what’s going on inside. Compared to a lot of recent automotive dashboards, the screen looks a bit more integrated. I didn’t feel like it someone superglued an iPad to the dash at least. The wide screen is pretty easy to configure, at least when the touchpad decides to cooperate. I’m at the end of my rope with non-touchscreens at this point. It’s OK to have a secondary controller, but most of the knob-based options work better than the Lexus touchpad. 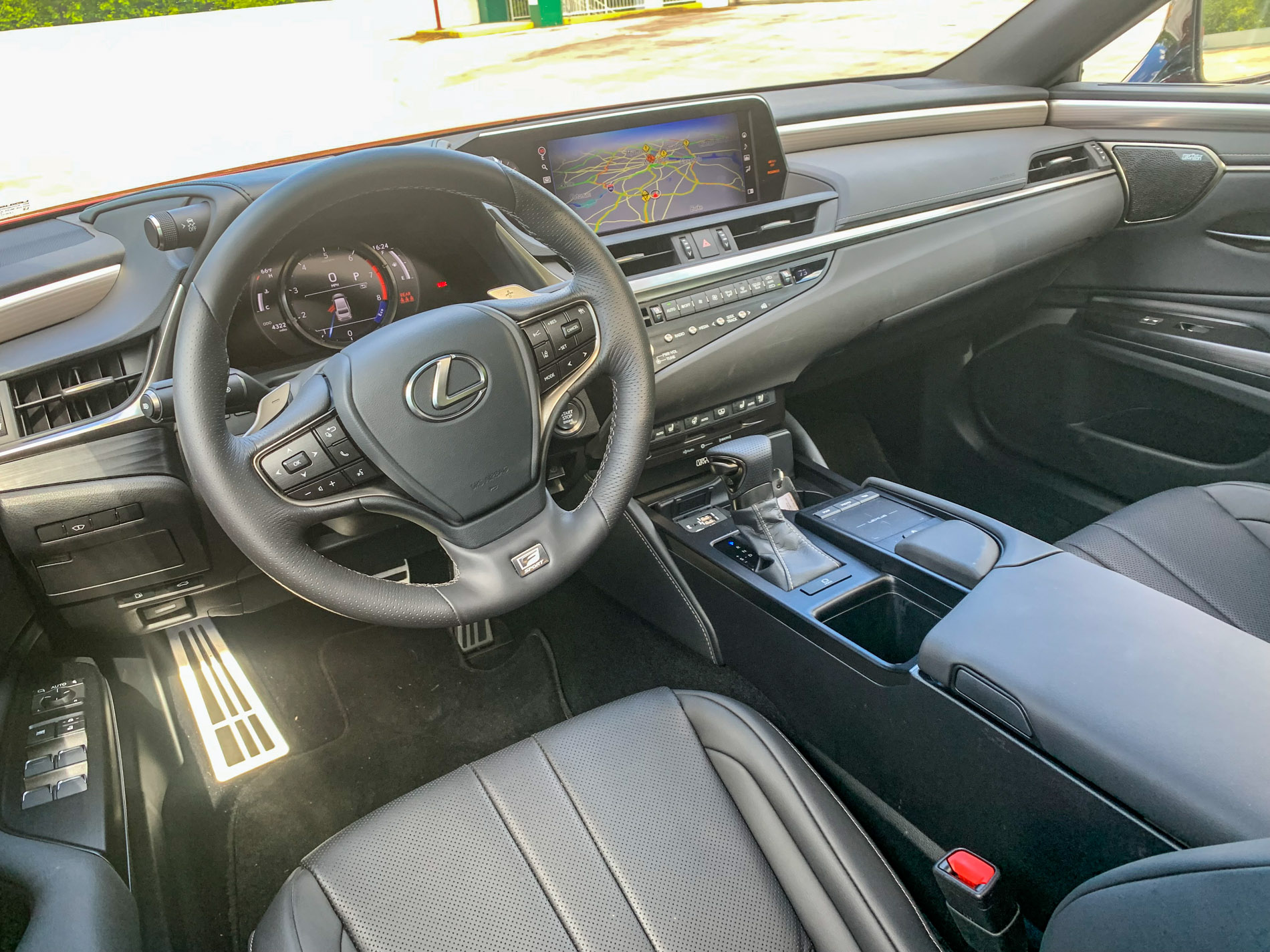 But overall there are few complaints, it’s super comfortable and there are plenty of redundant buttons to keep from having to slog through the infotainment system. The super tall shifter is a throwback. I liked being able to rest my wrist (that’s hard to say out loud) on it while driving. You have to imagine that tall shifters are likely going to be extinct within the next few model years. 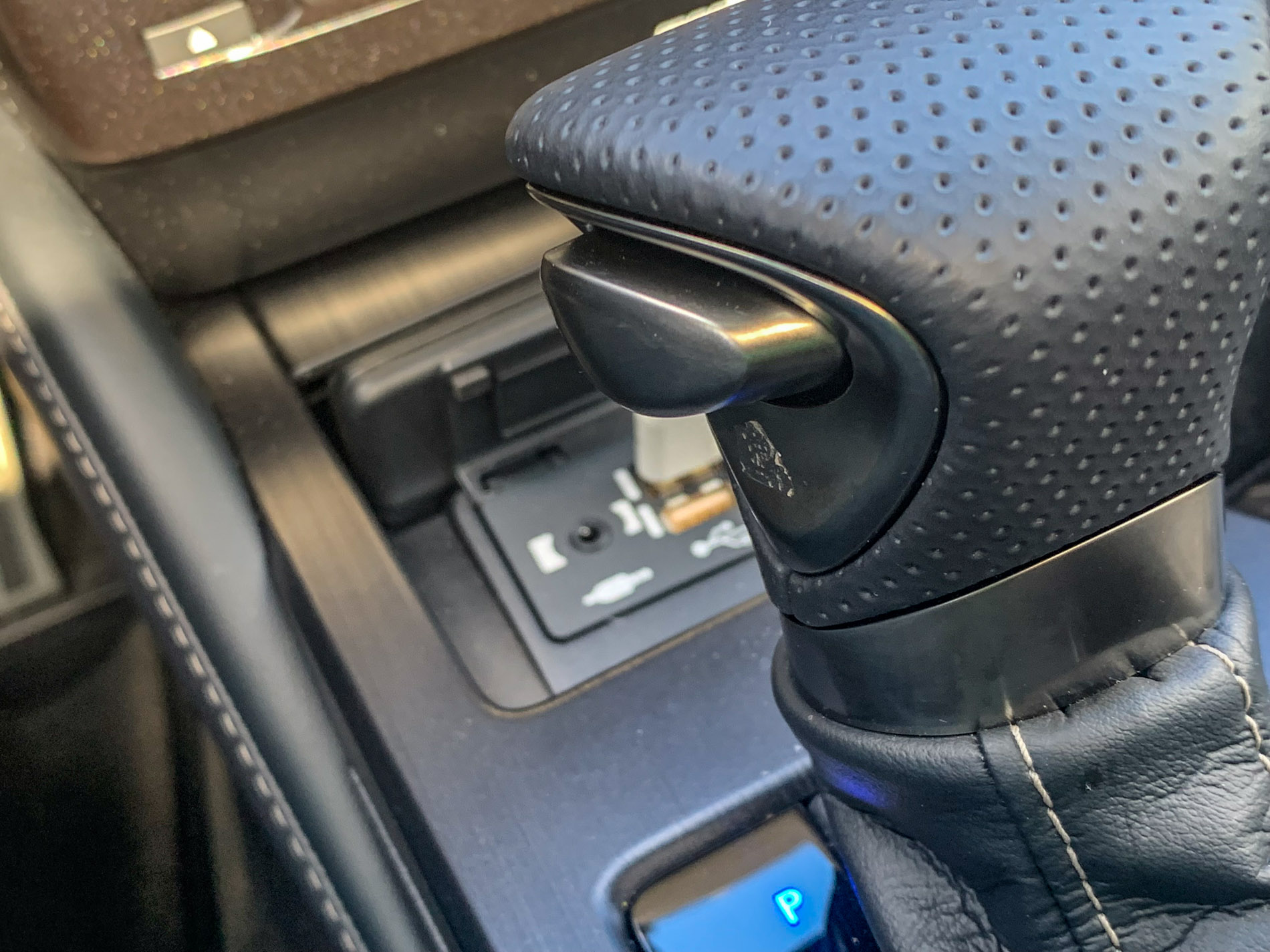 The rear has a ton of room, that larger Avalon GA-K platform gives the ES lots of room up front and in the back. The latest Sienna also rides on that platform if that gives you a sense of how large it is. The F Sport comes with “Black NuLuxe” seating surfaces with “Hadori” Aluminum trim. I’m not positive what all that means, but it looks nice. Plus, if you’re feeling froggy you can get the “Circuit Red” interior, but it limits your exterior color a bit.

Options on our test car included, well just about all of them. It had wireless charging, a head-up display, power rear shade, a heated steering wheel, and the Navigation/Audio package. Interesting you can still pony up $1,800 to just get Navigation. It’s a grand less than the Mark Levinson audio package plus Nav, but who uses the factory navigation anymore? 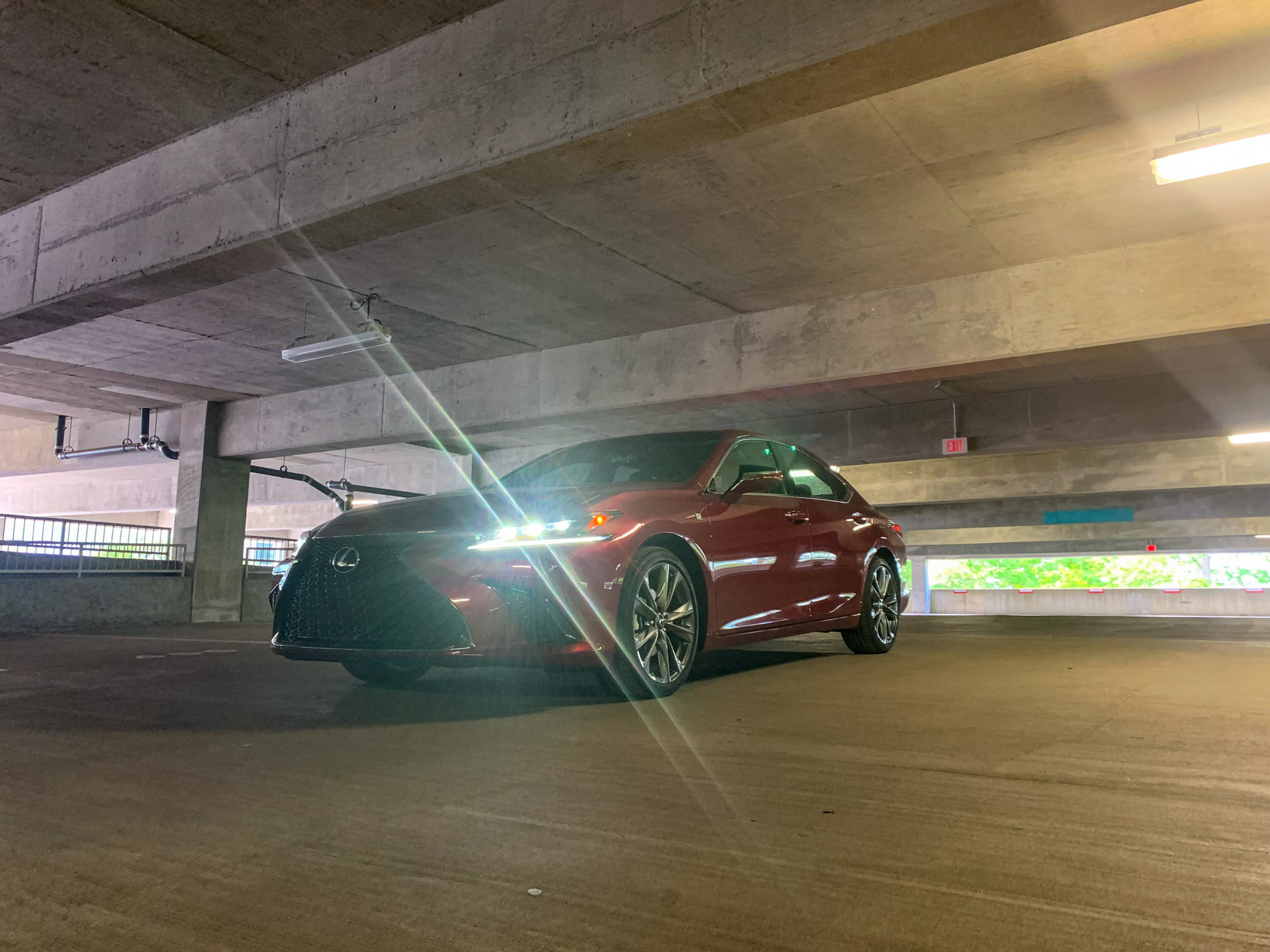 The “250” version of the ES is new for 2021 and is powered by a 2.5L inline four-cylinder producing 203 horsepower and 184 lb-ft of torque. You’ll get 302 horsepower in the ES 350 and 215 horsepower ES Hybrid, so it’s clear that this 250 is way down on power compared to the rest of the lineup. I’ll admit, I never felt like it was underpowered to the point where it was dangerous. Merging onto a rapidly moving DC highway for example. But it never felt quick either. Sixty miles per hour comes in around 8.2 seconds, more than two seconds slower than the ES 350.

You’d assume that that lack of horsepower gives you a good advantage at the pump? Nah, not really. The larger engine in the 350 still delivers 22/32 mpg city/highway (22/31 mpg in F Sport trim) while our 250 is rated at 25/34 mpg, according to our good friends at the EPA. So, you’re not getting a big mpg advantage considering the horsepower difference.

So, it’s not that engaging to drive, you might find yourself angrily smashing your fist into the touchpad, but overall it’s just a really solid car. Lexus legendary reliability should help absorb some of those negatives, and for the average driver, this will be a pretty fantastic car. 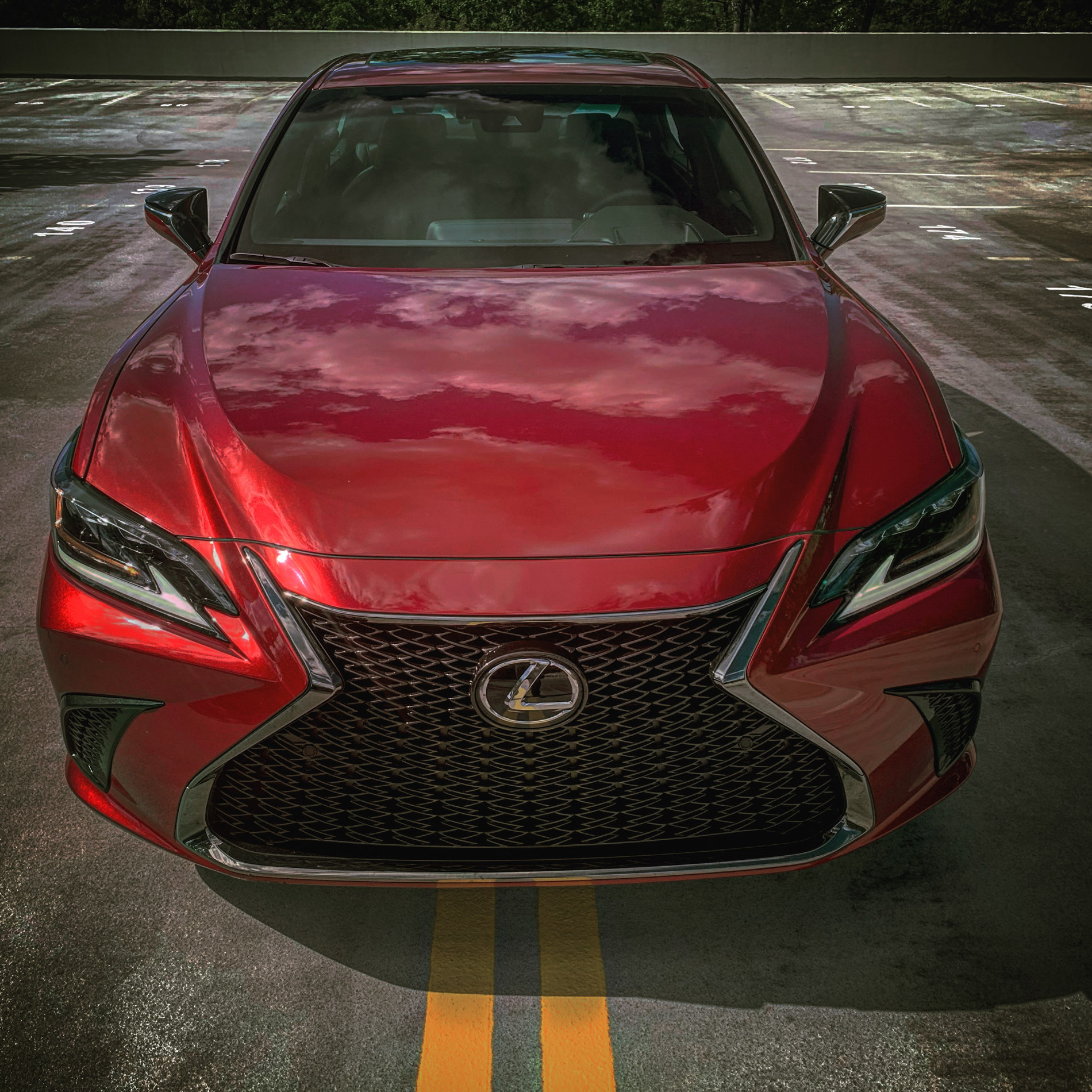 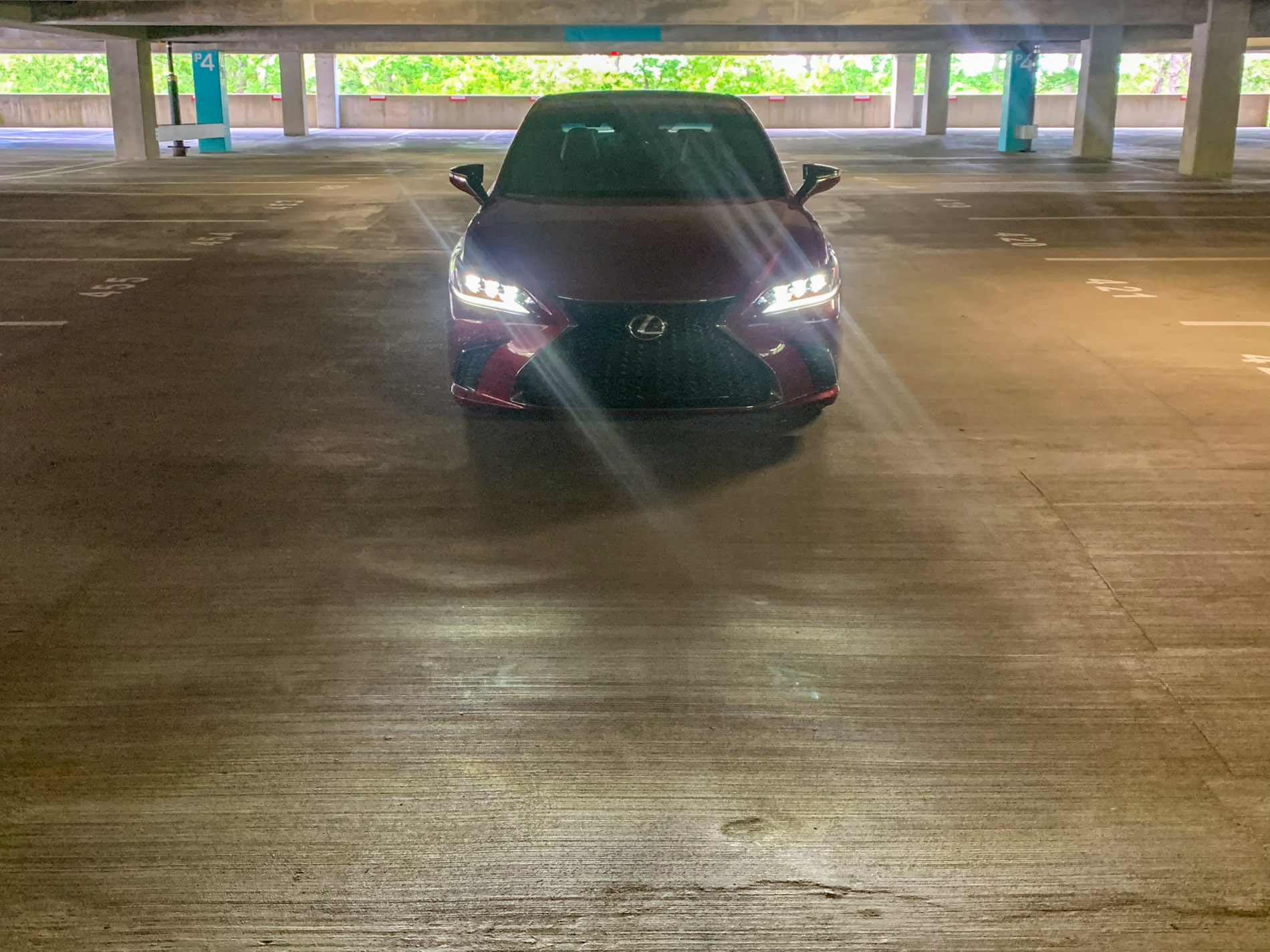 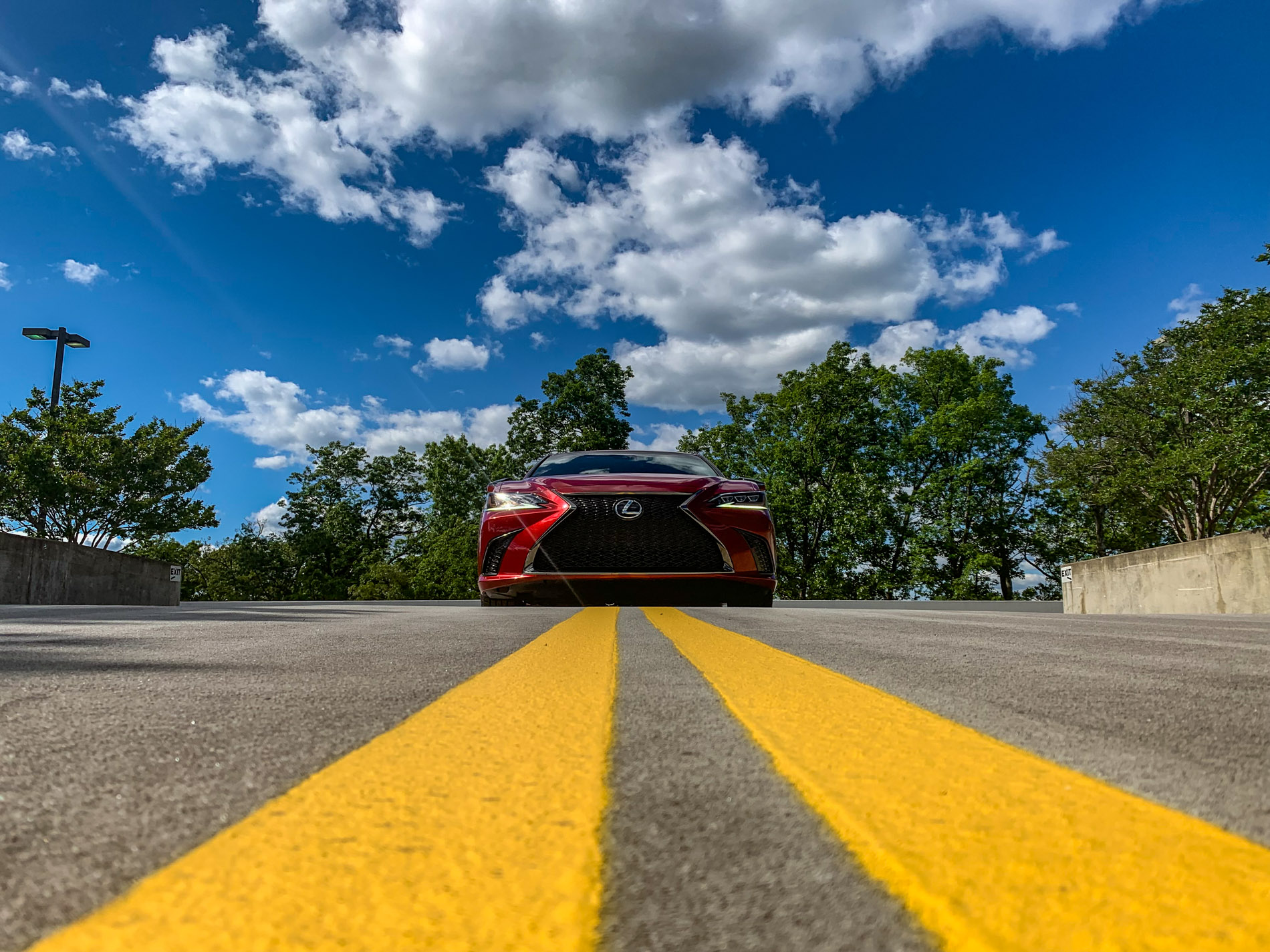 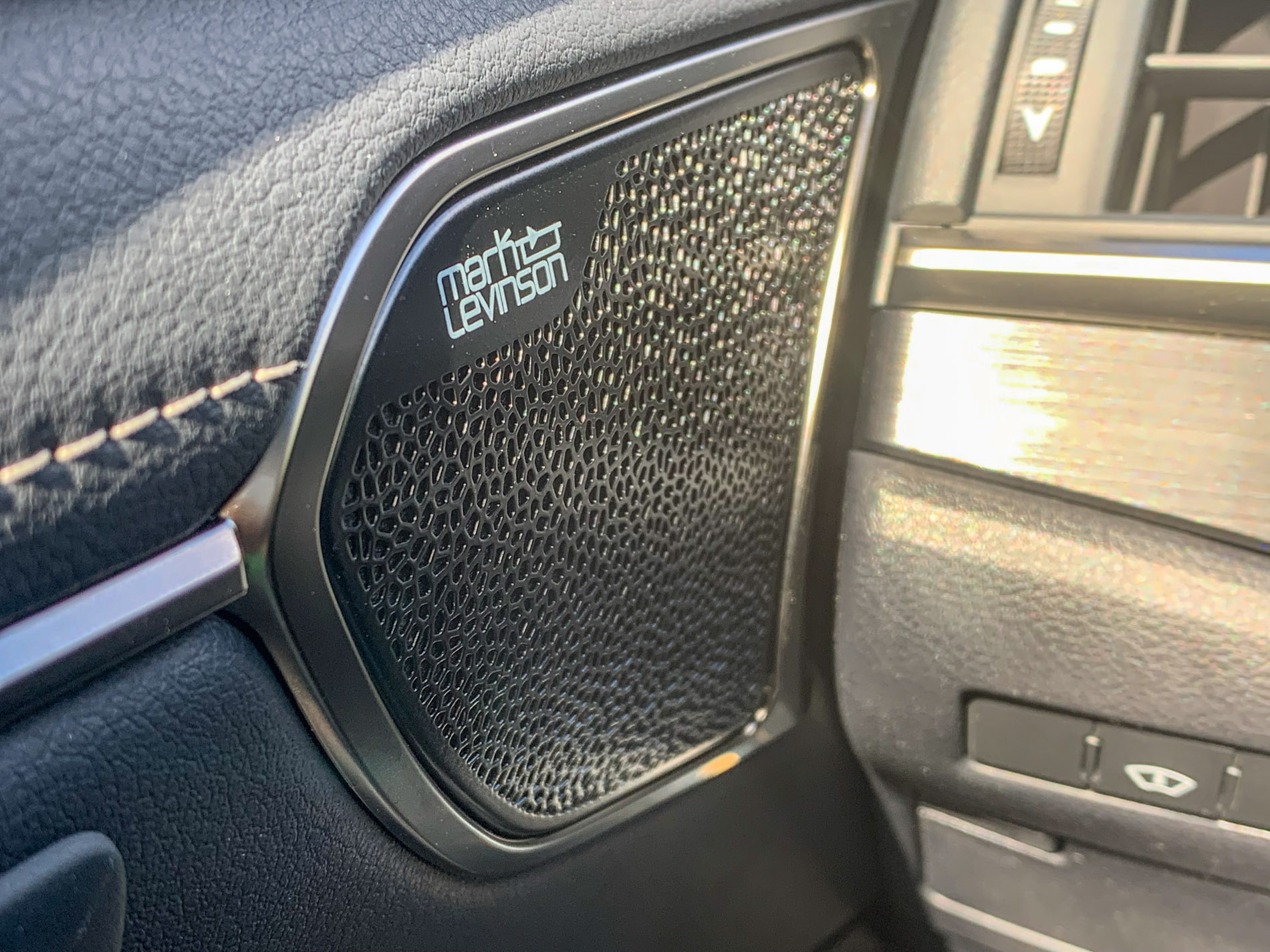 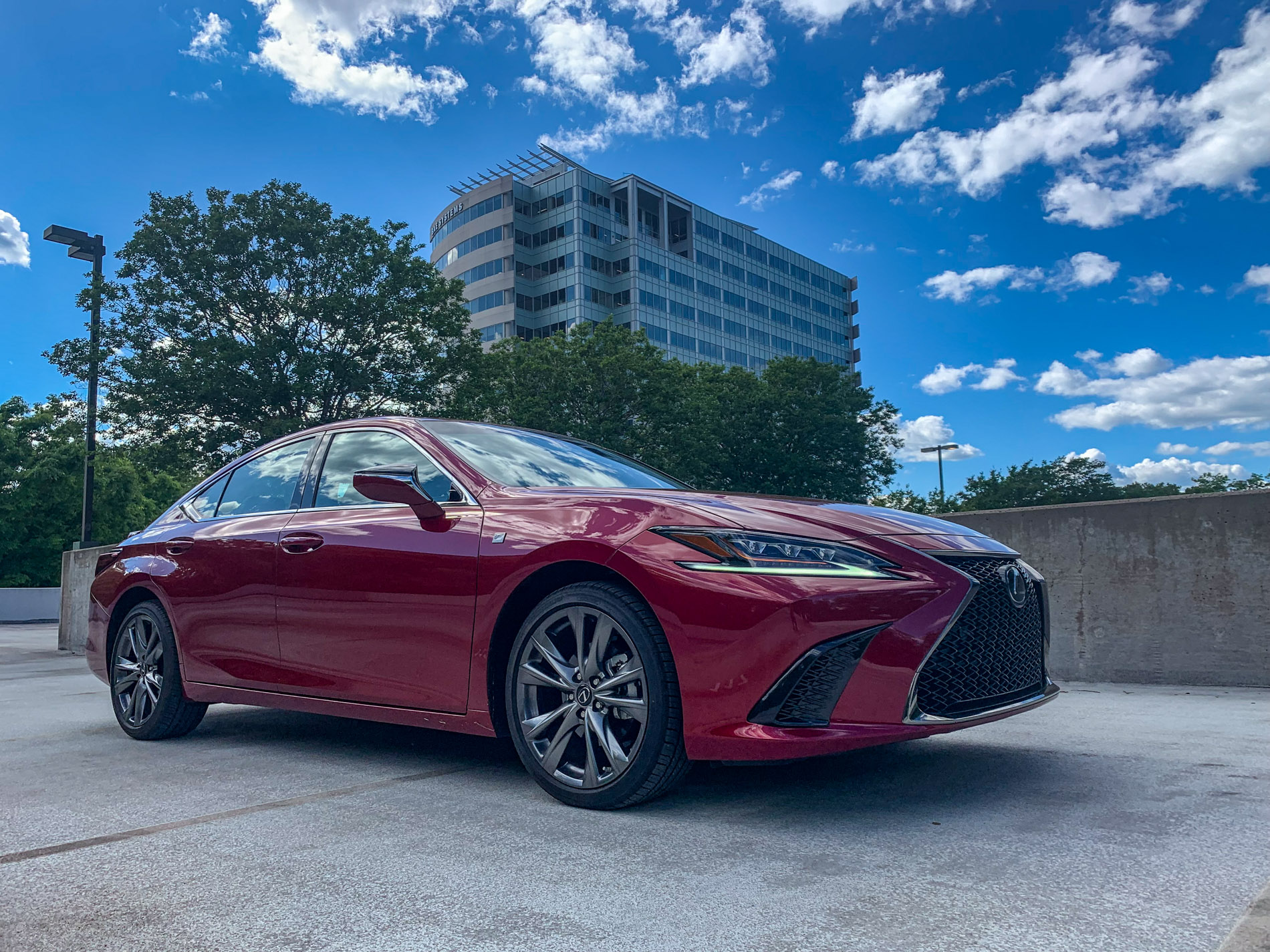 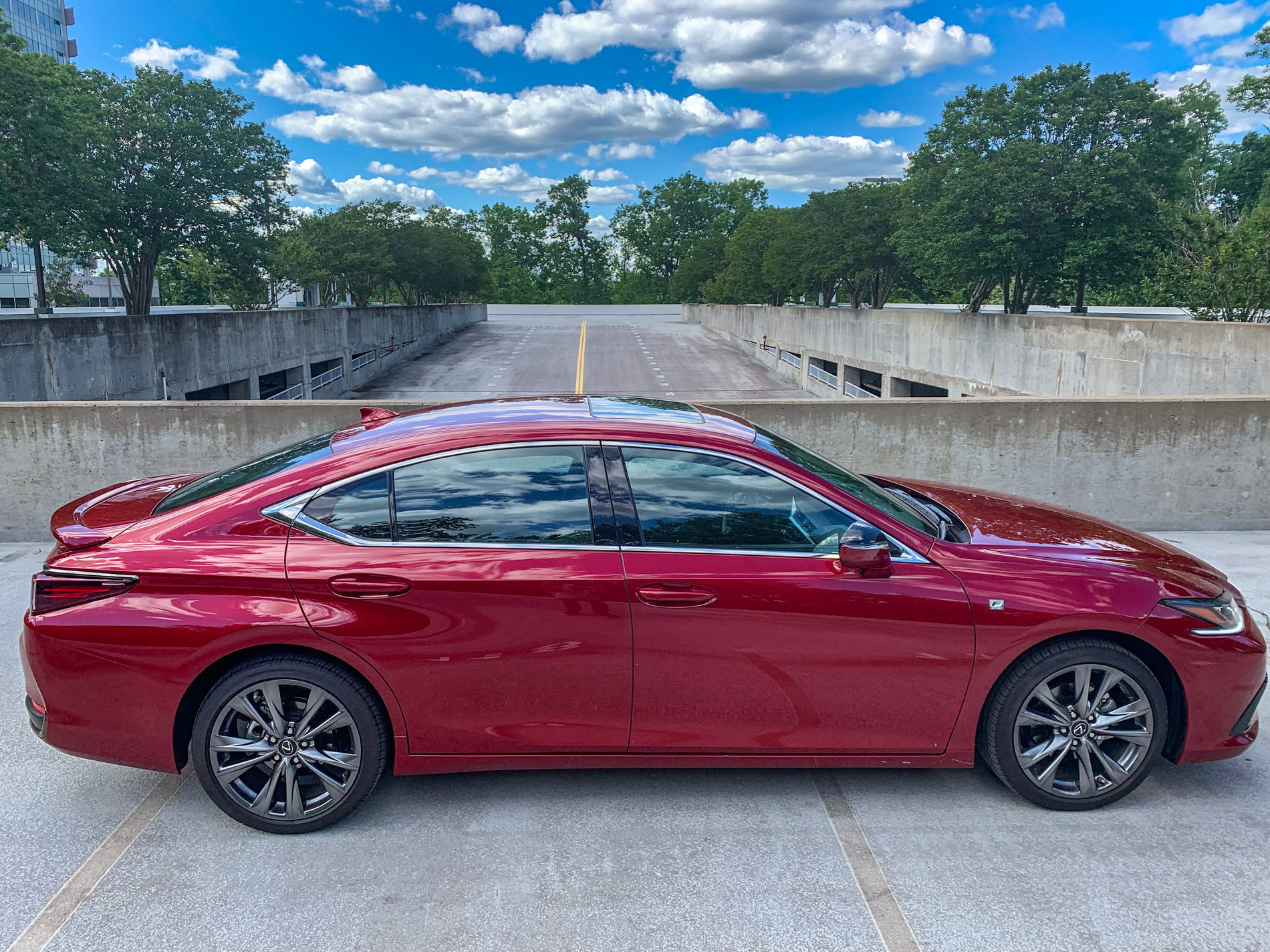 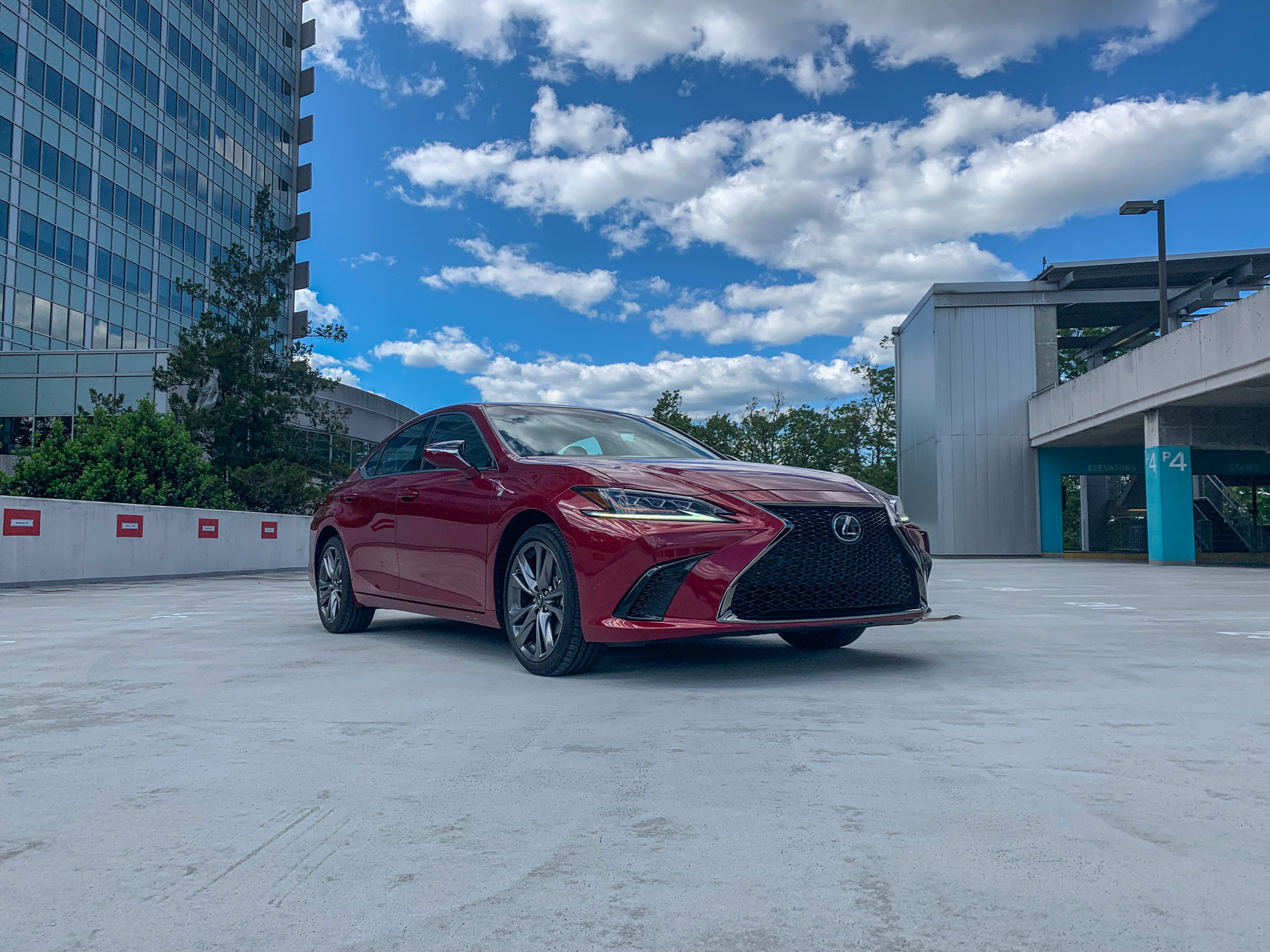