I’ve got a lot of history with fun Hondas, so when I saw that “2021 Acura TLX SH-AWD A-SPEC” on my upcoming press loaner list, I was pretty excited. First, check out Jeff’s article on the latest TLX, he tested basically the same car I had but in a different color. Great, welcome back. Before we get into the normal background section to kick off my TLX review, I have to take care of something. 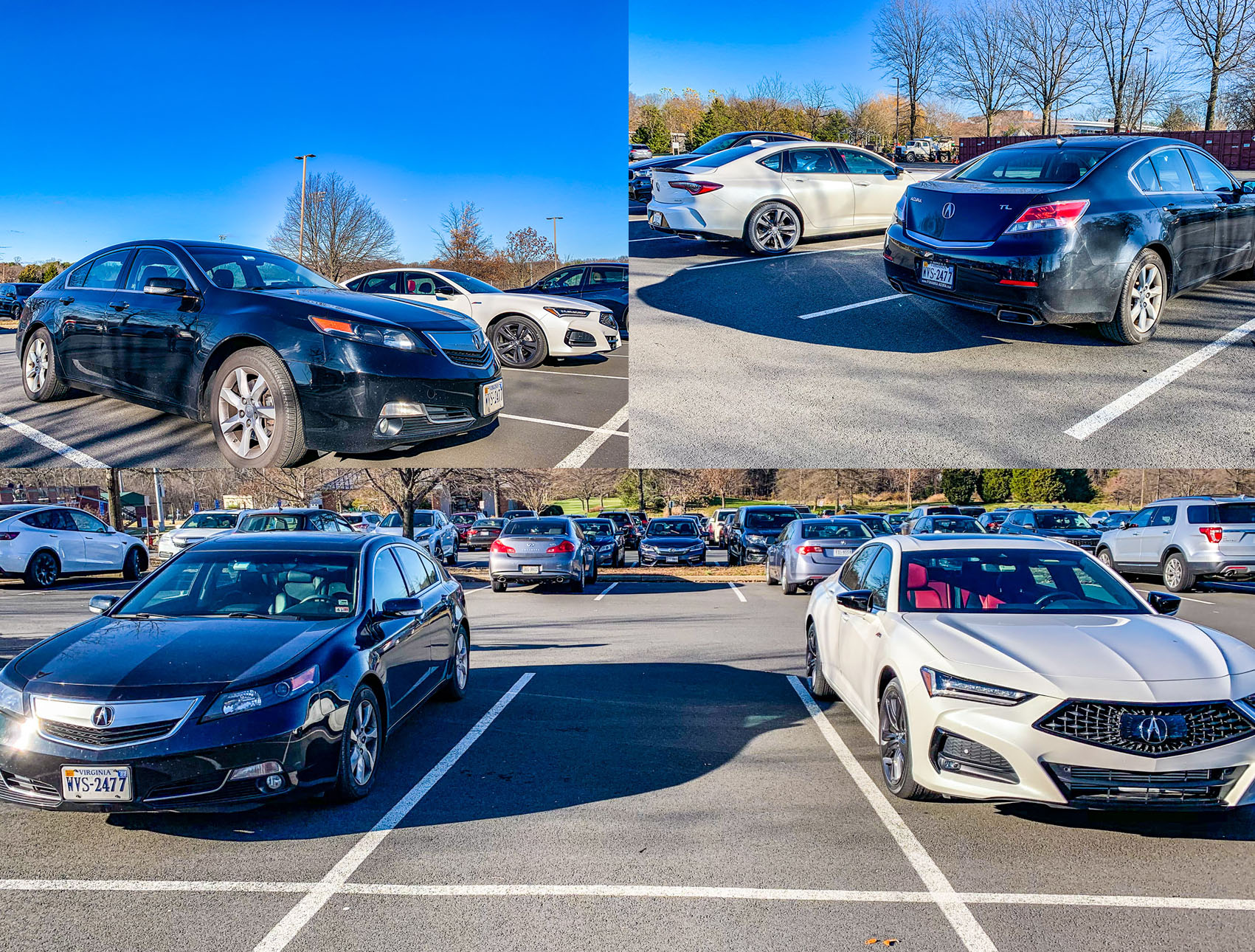 This is not Pedro’s TL, but I thought the imagery was fun.

The year was 2002, as the header implies, and a lot of my free time (and some billable time) was taken up on web forums BS’ing about cars. It was a great time in my life, a lot of real friendships were formed and even some positive knowledge transfer happened from time to time. One morning, in a group dedicated to a local car club I was in, we read the rant from a friend who had mixed it up with a 2-door manual V6 Honda Accord in his V8 Mustang. He lost. Somehow the owner of the Accord, Pedro, made it onto the forum and we are all still friends to this day. The Mustang got a supercharger and Pedro upgraded to the new 2004 Acura TL Type S sedan.

My first autocross experience happened a year earlier in my 2001 Honda Prelude. Painted the gorgeous Electron Blue, it was the first car that got me into cars. It also got me into the competition, joining the local Prelude club at an autocross to experience my first timed event. I “campaigned” the Prelude until I swapped it for a 2003 Mustang GT. At that point, Pedro and I were on the same “team” (squad?) and he was driving the TL each weekend at various events in the series. It should be said, that Pedro is a very good driver, but that he absolutely embarrassed some other autocrossers in that car. And then hauled all the kids to school in it. It was about that time that I realized just how amazing and well-rounded that Acura TL was. OK, back to the regular schedule. 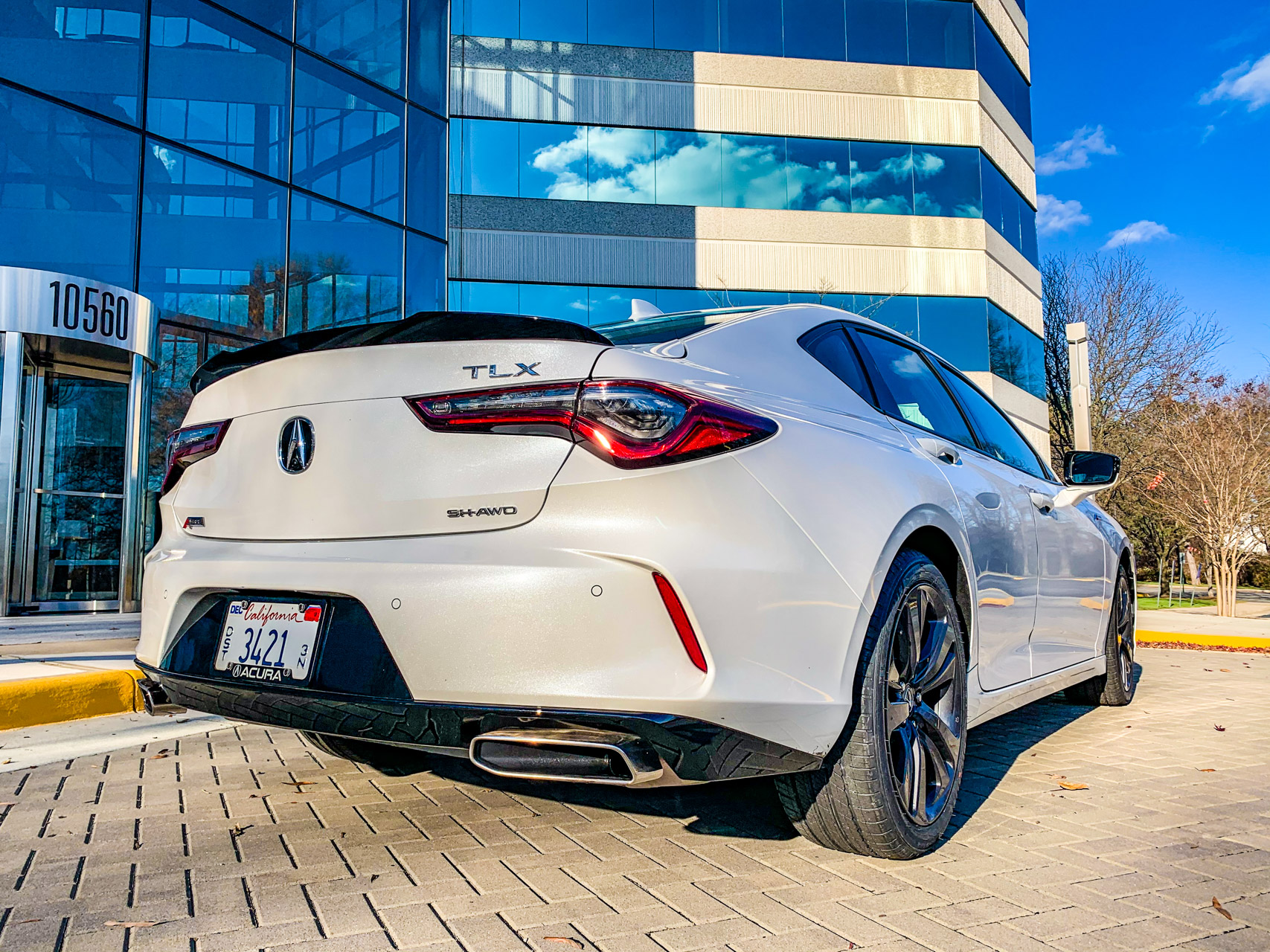 Fast forward ten years and Acura was still selling the TL, along with the smaller TSX. It was that year, 2014 when they pulled the plug on both cars and announced the replacement TLX. I remember thinking “OK, what the hell are they doing over there”? I liked the TL and the TSX and rationed that a single replacement made no sense. Perhaps Acura was prescient enough to see that they had one too many sedans in their lineup (the ILX was number three) since the SUVpocalypse was well underway.

The first-gen TLX went from 2015-2020 and, especially after the 2017 nose-job, it’s a very handsome car. Of note, also as of 2017, you can get an extended wheelbase TLX-L in China, because of course, you can. That makes this 2021 we’ve been driving the very latest 2nd generation car. Let’s take a look at the trims and options.

The 2021 TLX starts at a pretty reasonable $37,500.  Jeff mentioned that it’s a “larger than a 3-Series, but priced like one”.  Actually, it’s even better than that. A base 3-Series or C-Class will both run you over $41,000 for reference. If you want Superrrrr-Handling AWD it still only rings up at $39,500.  At this point I’m just retyping numbers that you can read above. Our tester came with basically everything, which totaled out to $XX,XXX. Let’s see what’s what. 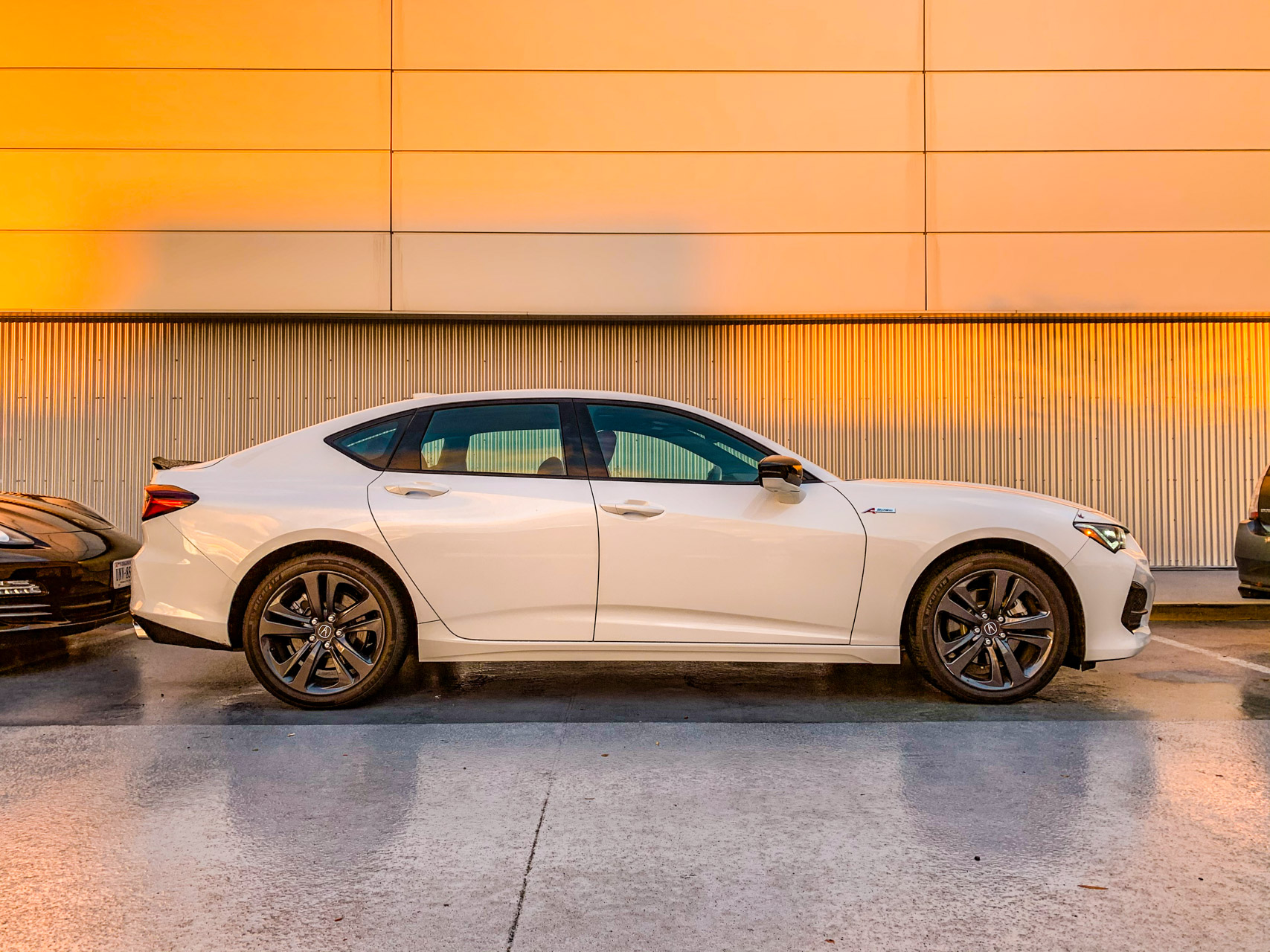 Don’t worry, it’s not as close to the Panamera as it looks. He’s over the line anyway!

I’ll start with my favorite bit, the exterior. The long hood gives the TLX a sports-car-like appearance. Also, the little details across the exterior come across as well thought out and up the sport factor. 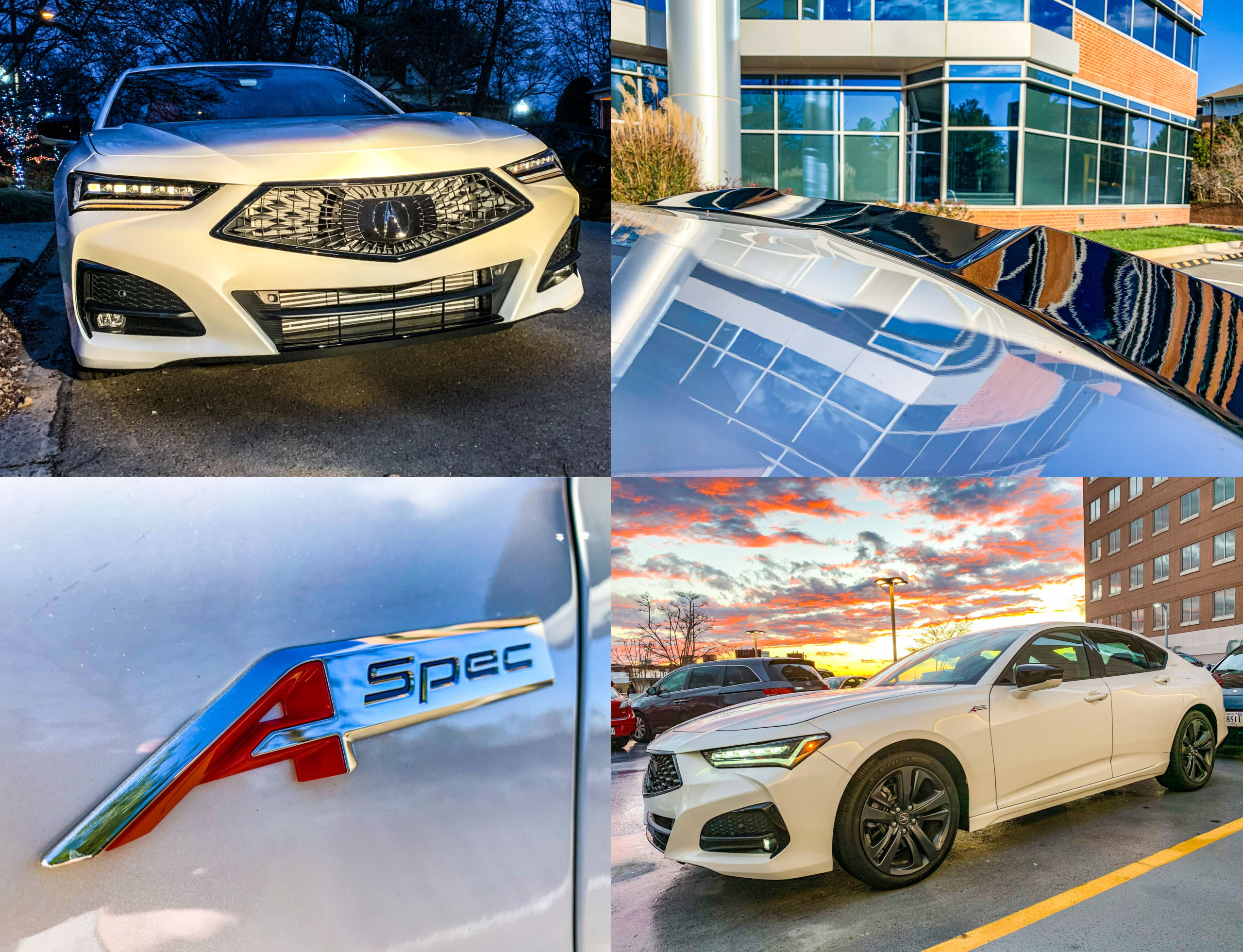 Plus, look at that gorgeous grill, even at night, it looks cool.  Rest in hell Acura beak!  The rear reminds me a bit of the Alfa Giulia, but maybe it’s just the spoiler. 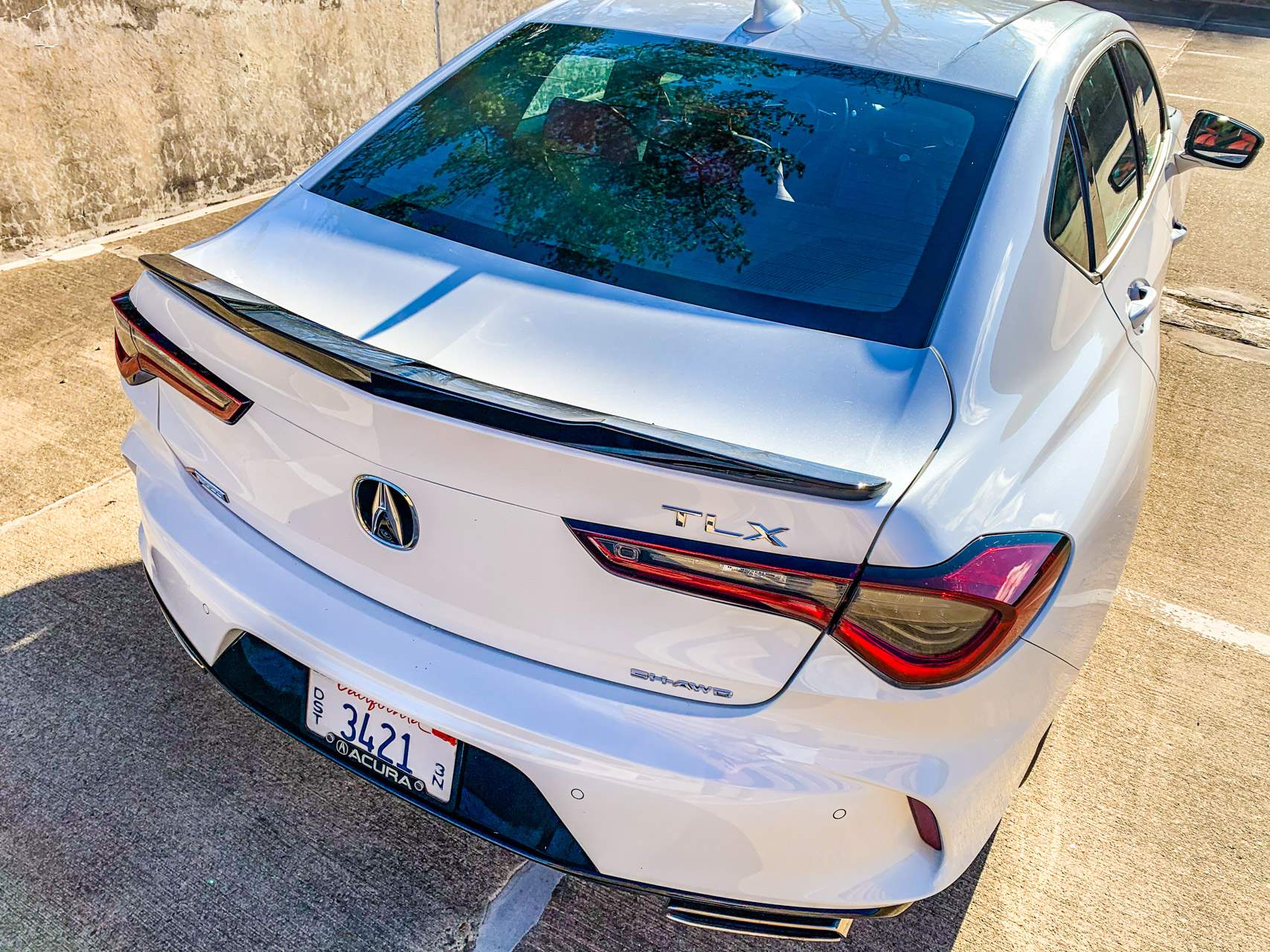 Acura has always had “nice” interiors. They never felt quite as high end as the Germans, but they used good quality materials and everything worked. Acura has integrated a similar dash setup that first arrived in the NSX and then the latest generation RSX. It’s here now in the TLX as well. I like it, but it’s definitely “sporty” which may put off some buyers looking for a more staid luxury sedan. Maybe it’s just the red trim! 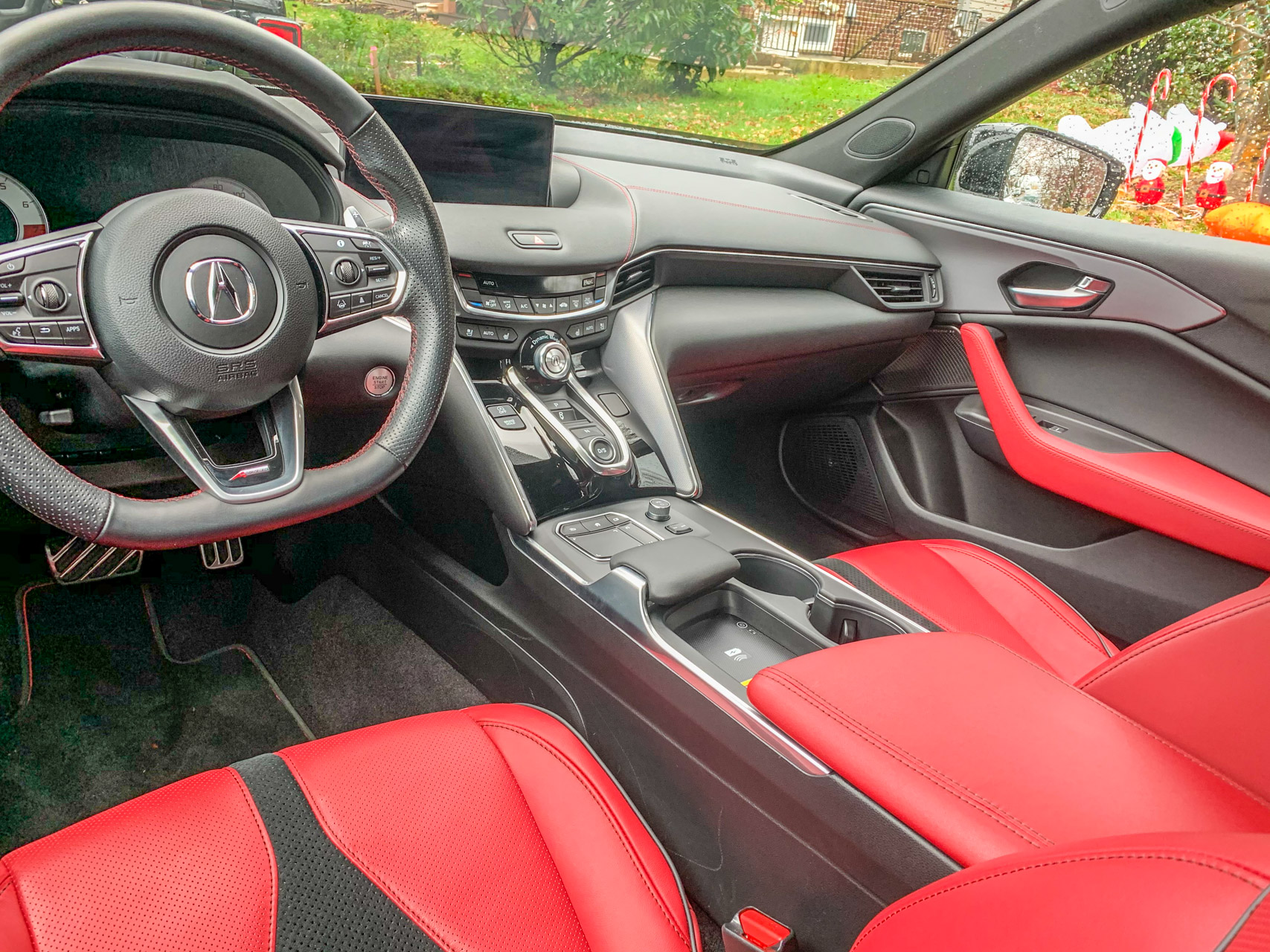 Also, I have to agree with Jeff, Acura has some of the best seats in the business. Just the right mix of bolster, padding, and support. 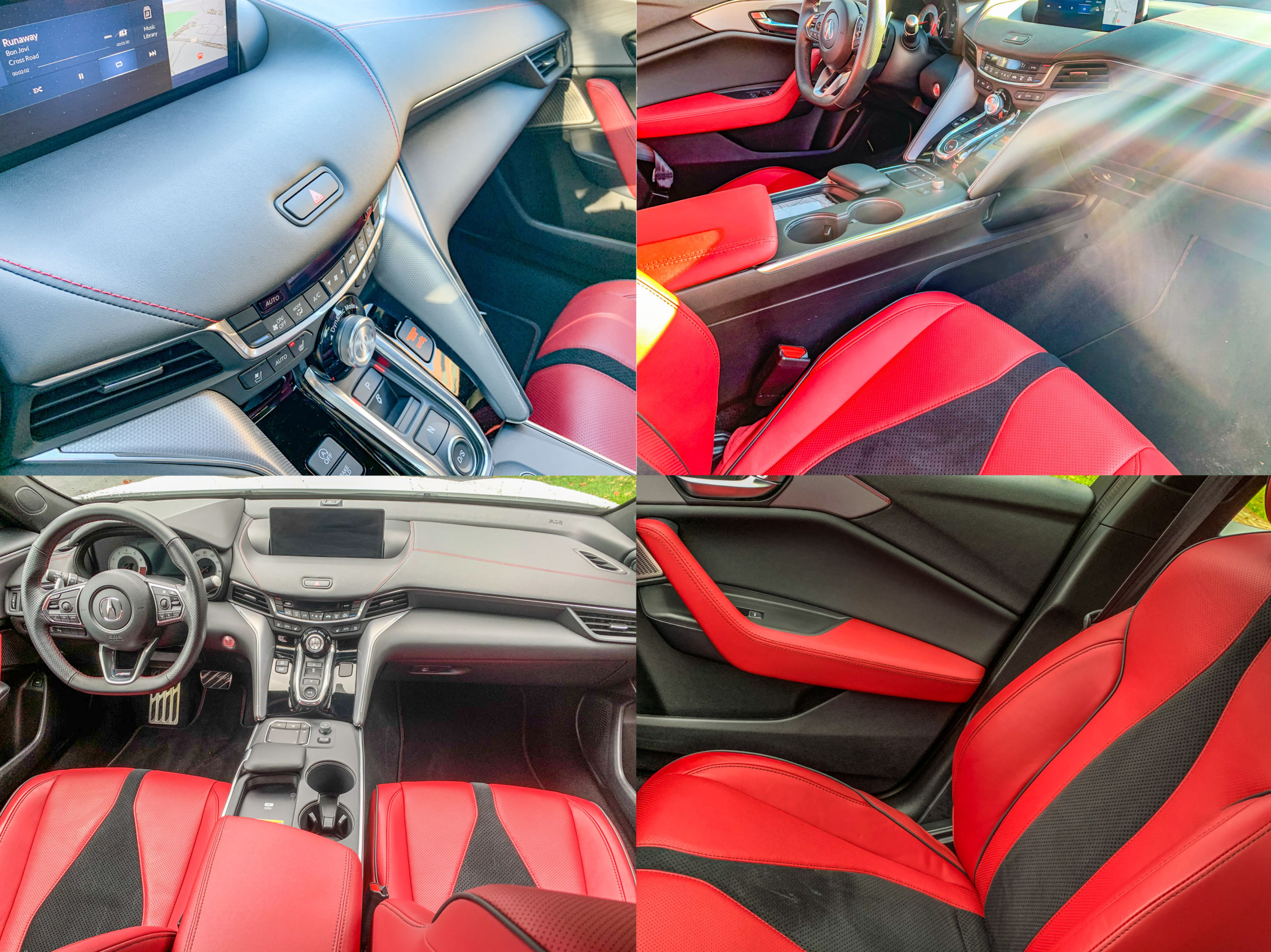 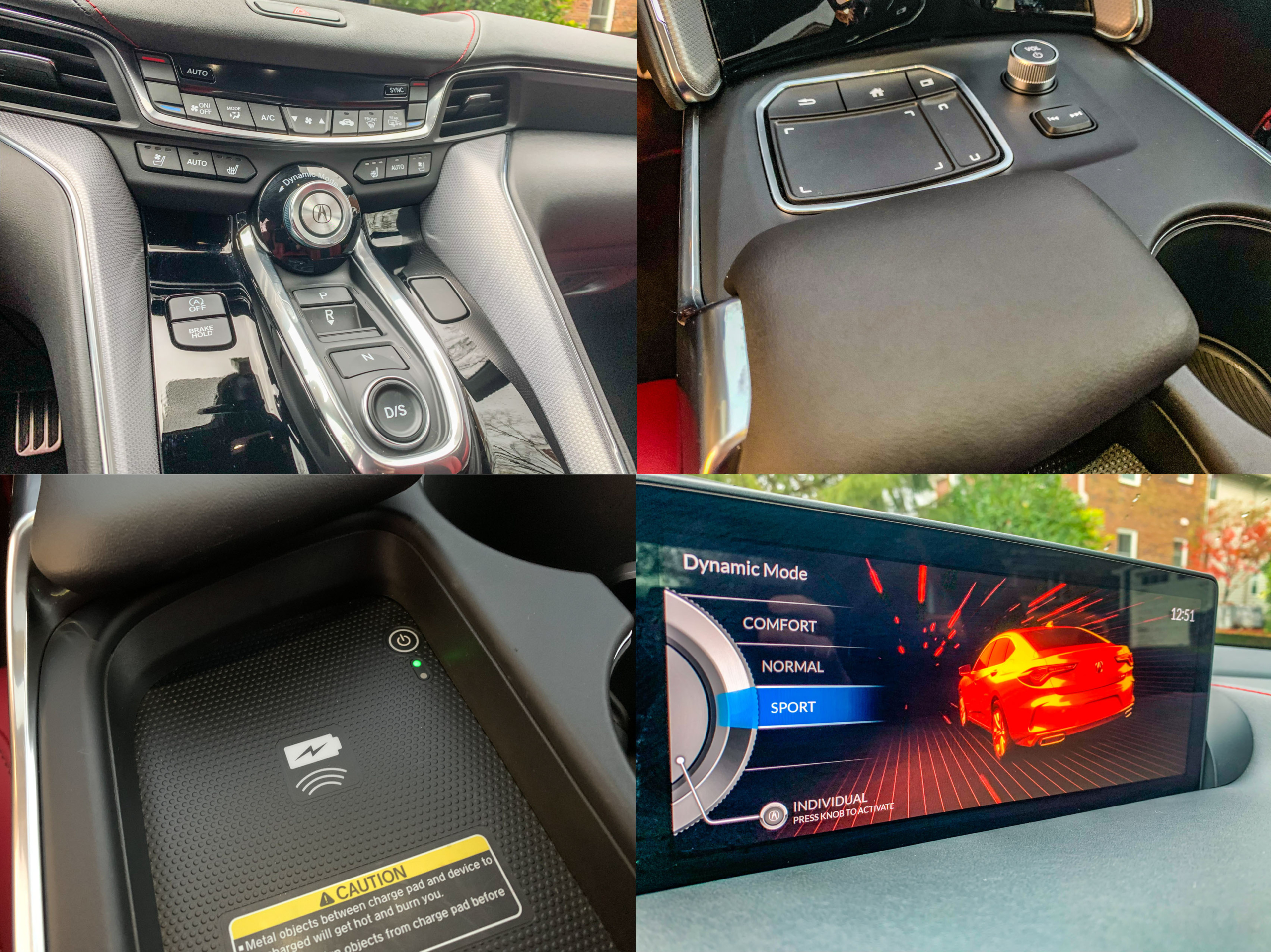 Also, I felt that the touchpad interface was way better than the similar Lexus setup. It allows you to “hover” over items more consistently before choosing, I found that I was selecting the correct item much more often than in the last Lexus I drove. 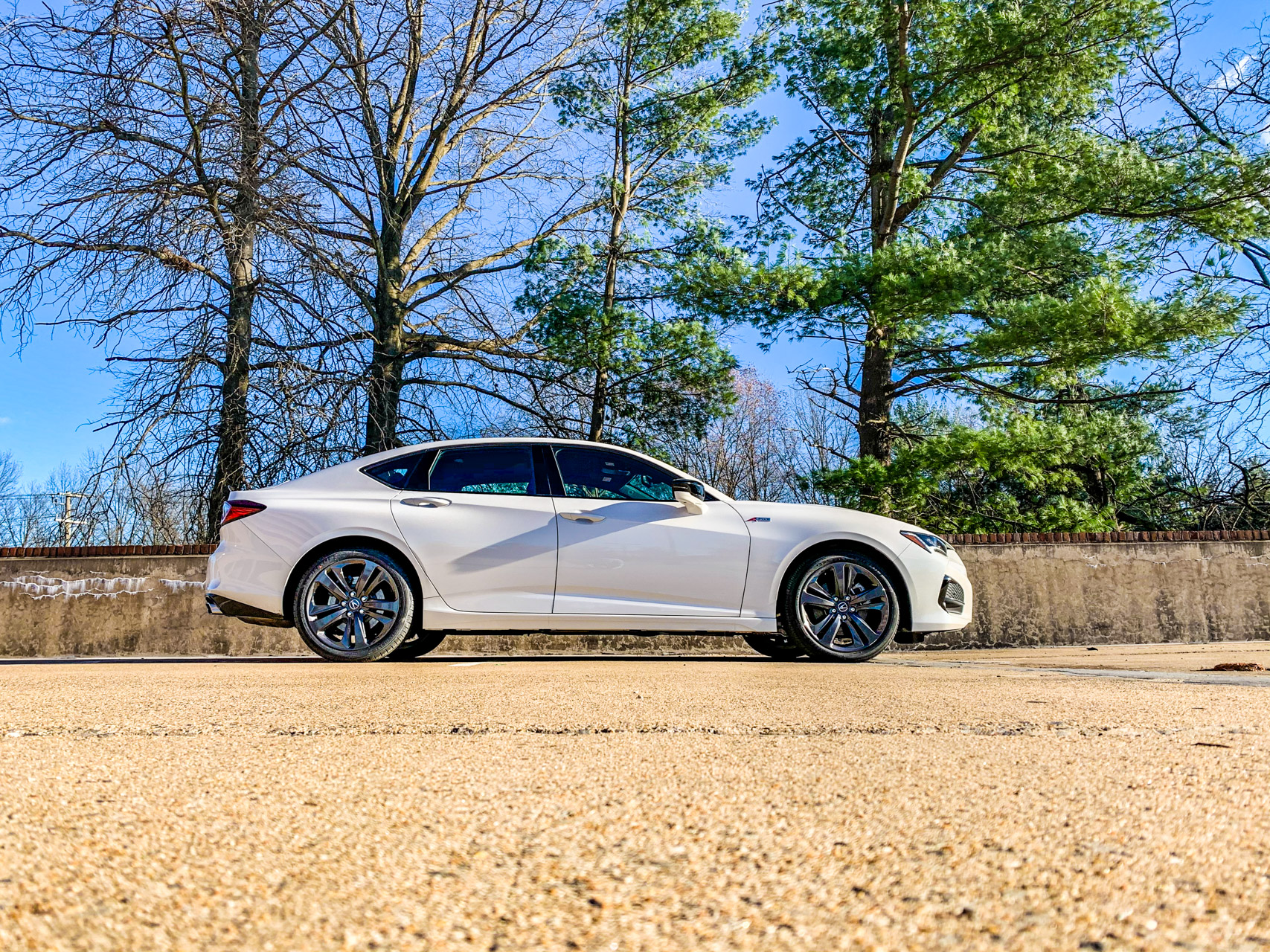 Most TLX buyers won’t be too concerned about track times, but it’s great to see that the SH-AWD is engineered with enthusiasts in mind. It’s a rear-biased system that favors over vs. under-steer. As Jeff noted, the all-seasons are a letdown. I managed to get stranded on the side of the road when I hit some road debris and the fix-a-flat compressor just wasn’t up to the challenge. Not the car’s fault, but if I’m going to lose a spare, I’d at least like to have some performance tire options.

Overall though, the chassis, brakes, and steering are all fantastic. It reminded me of Acura’s of yore, it’s a lot of fun to drive. 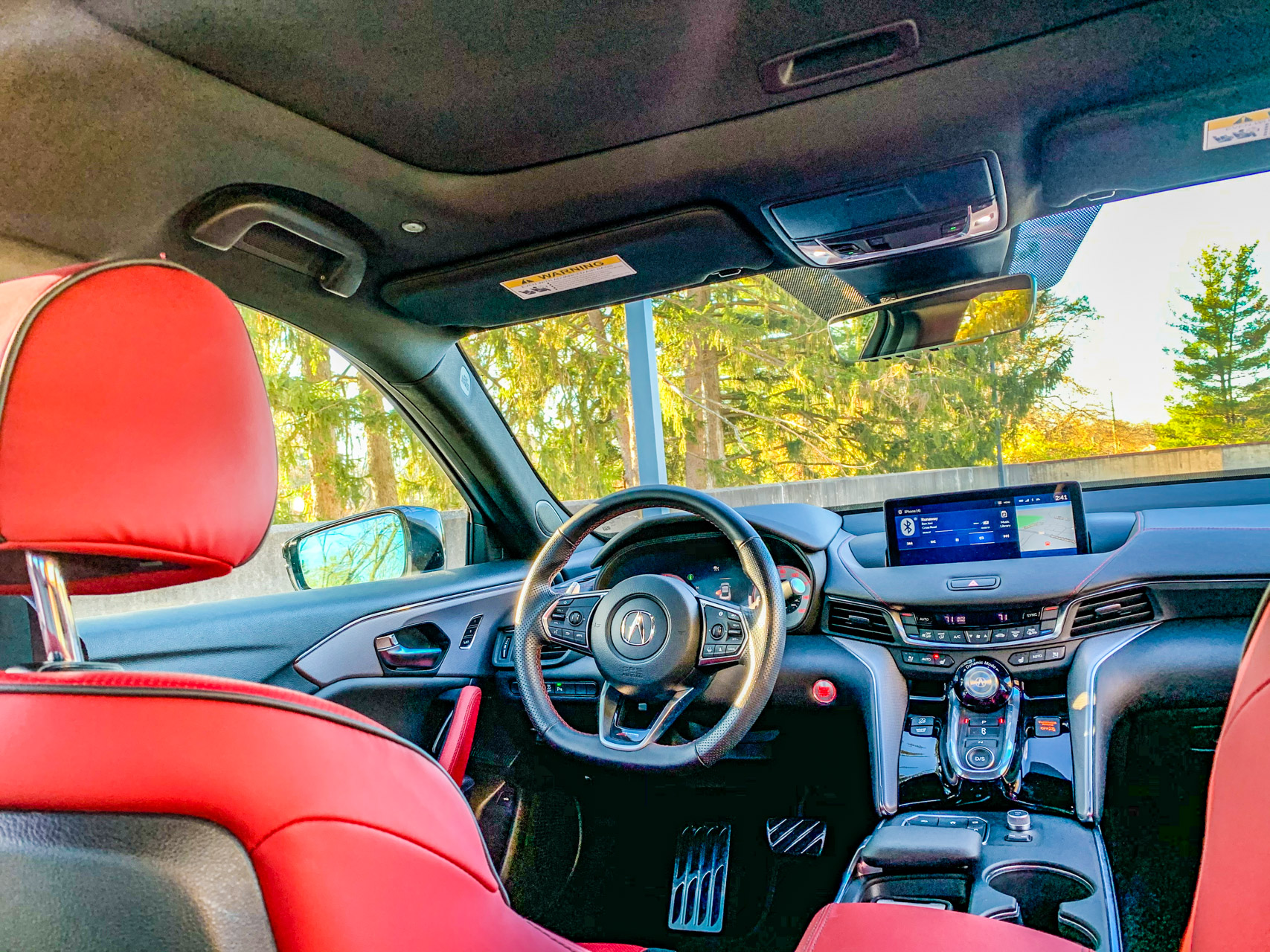 Most buyers in this segment are going to be looking closely at price. As I noted, the comparable BMW and Mercedes sedans are all priced significantly higher, and even the Audi A4 starts at just over $39,000. The TLX undercuts the 3-series price but it’s larger and roomier.  If you’re looking for a full midsizer, it’s still a bit smaller than a 5-series, E Class, or A6 but I found the size to be just about right.

Hoons may want to consider waiting for the TLX Type S. We’re expecting 355 horsepower with a sticker price of around $50K. 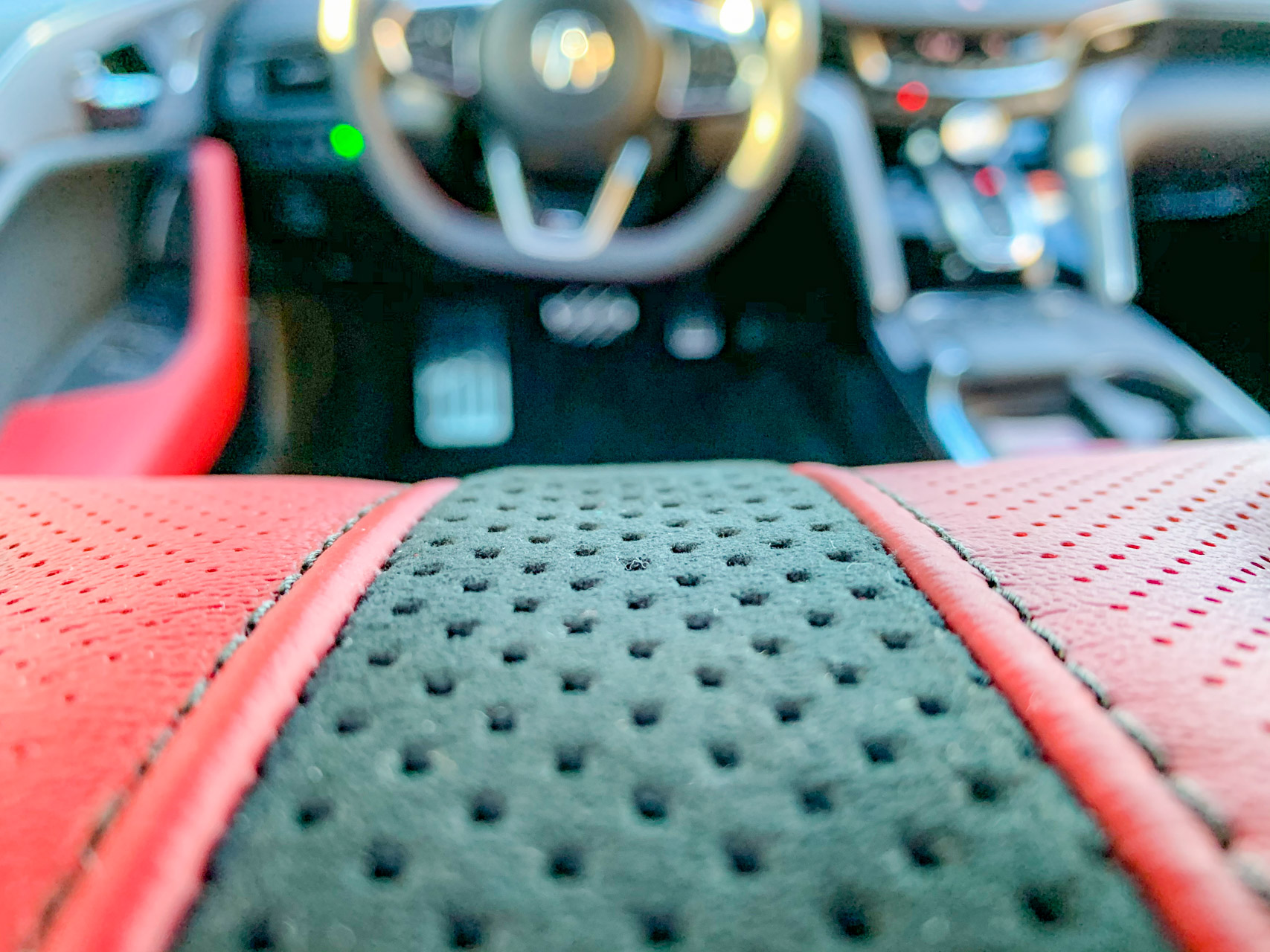 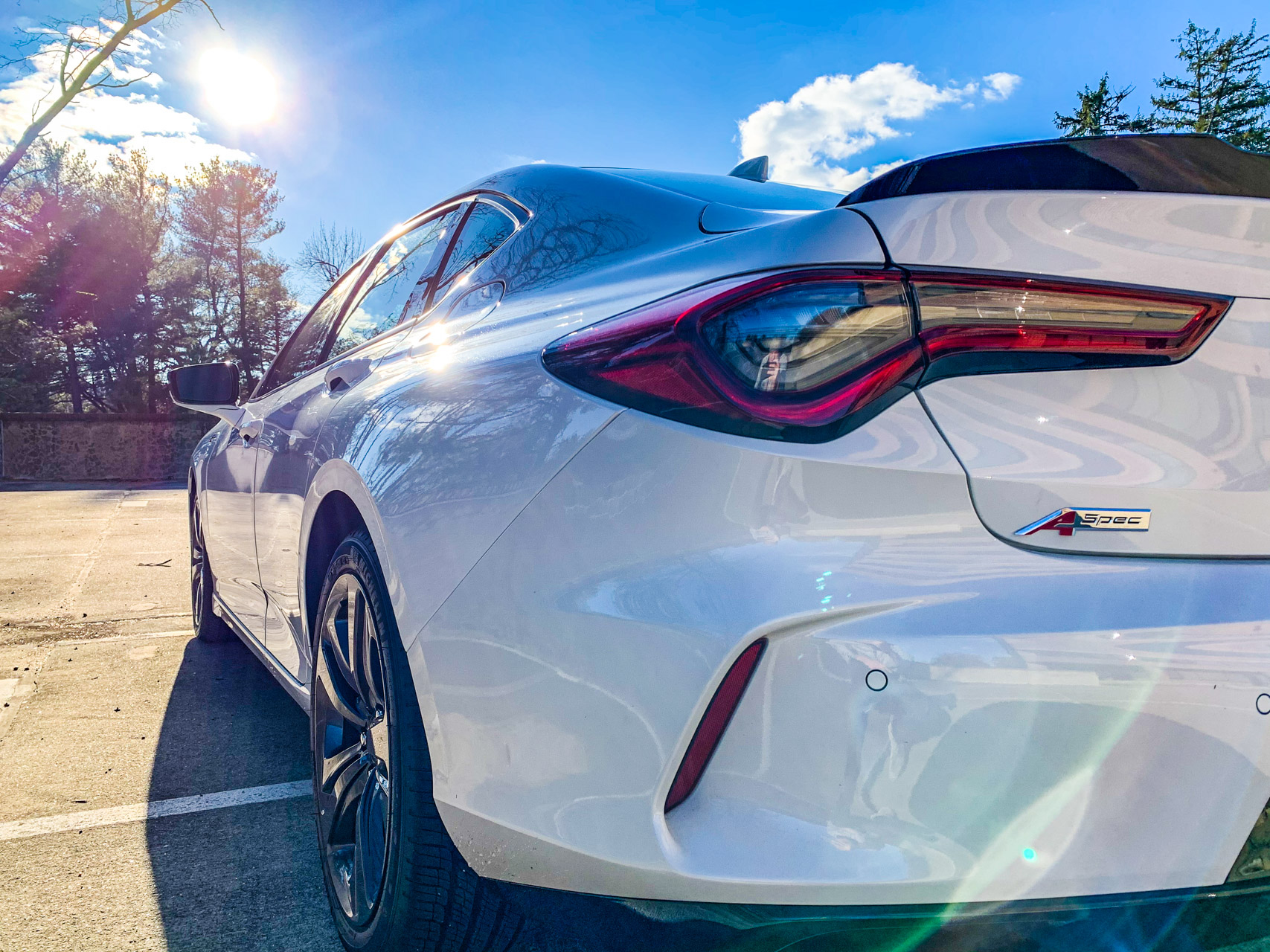 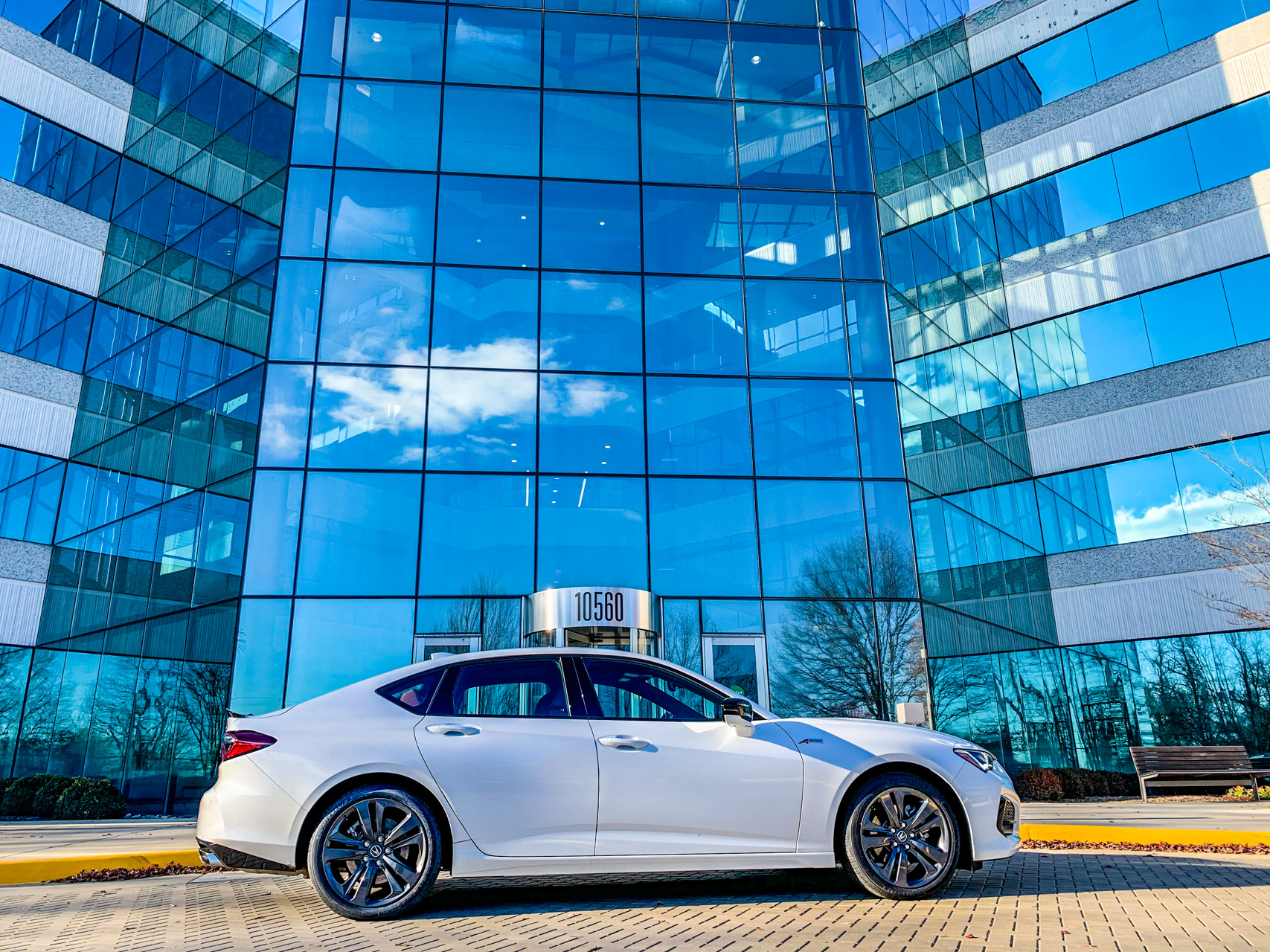 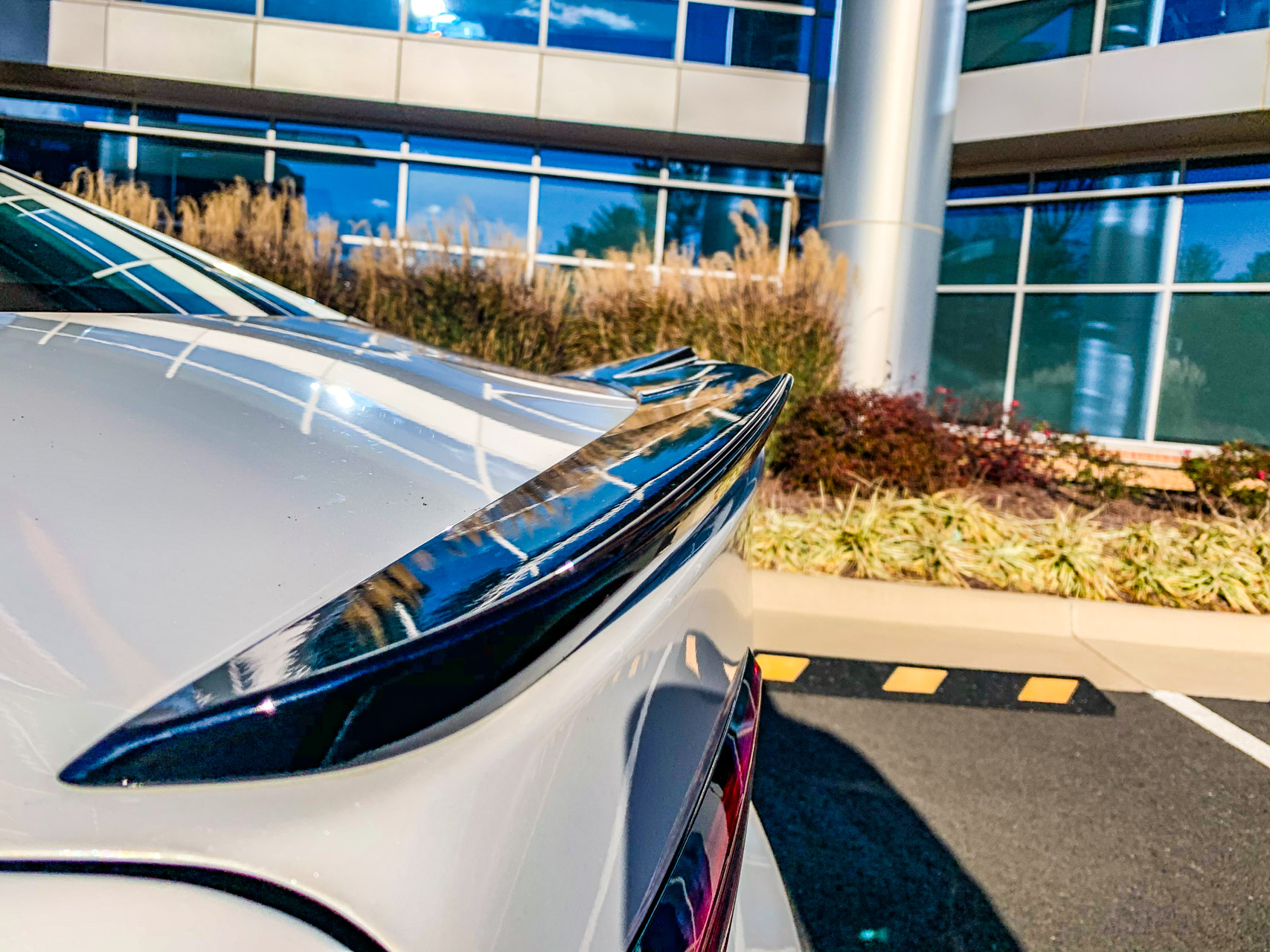 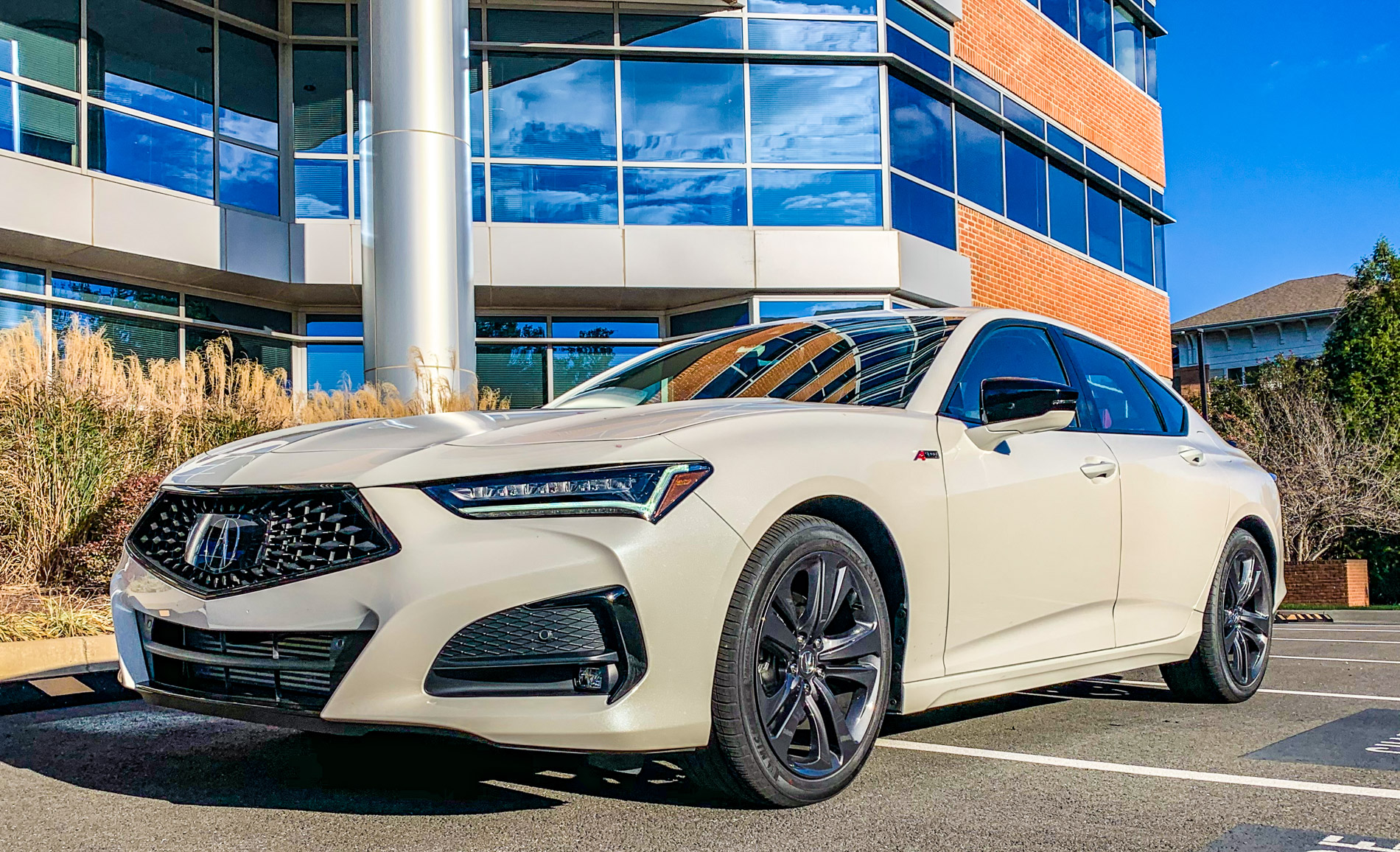 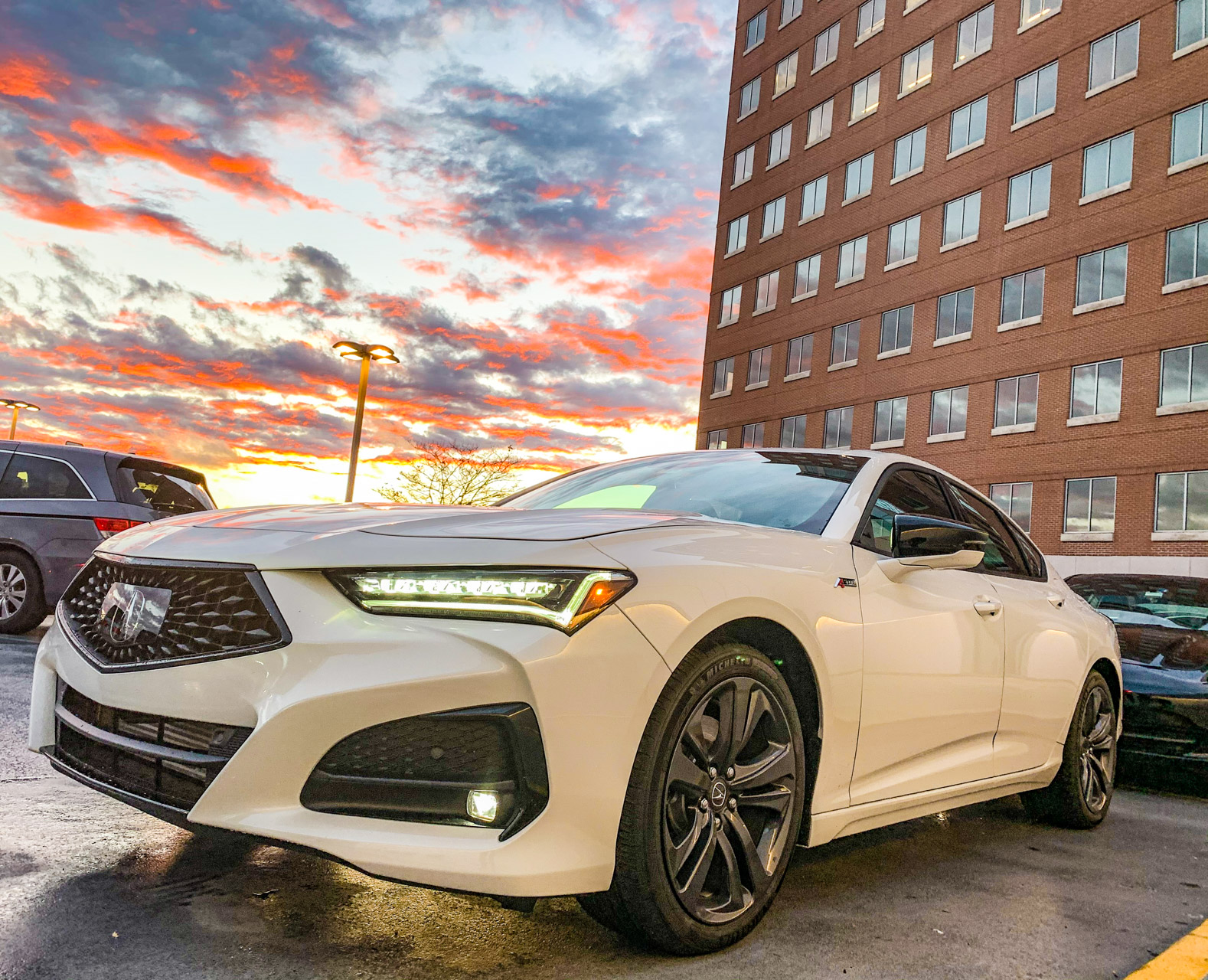