It’s unlikely that the average Hooniverse reader is unaware that there is a new Toyota Supra and a new BMW Z4 for 2020. Nor is it a stretch to say that you all likely know that the cars are built from the same G29 BMW platform. However, most people have probably not had the chance to test them back-to-back and likely assume that they are pretty much the same car. I know I did. I recently had a great opportunity to drive both cars hard on a magically twisty rural road near the Chesapeake Bay in Maryland. I’ll run through what I hope will be some valuable consumer advice, and then tell you which one I think is best.

But first, let’s see how we got here. 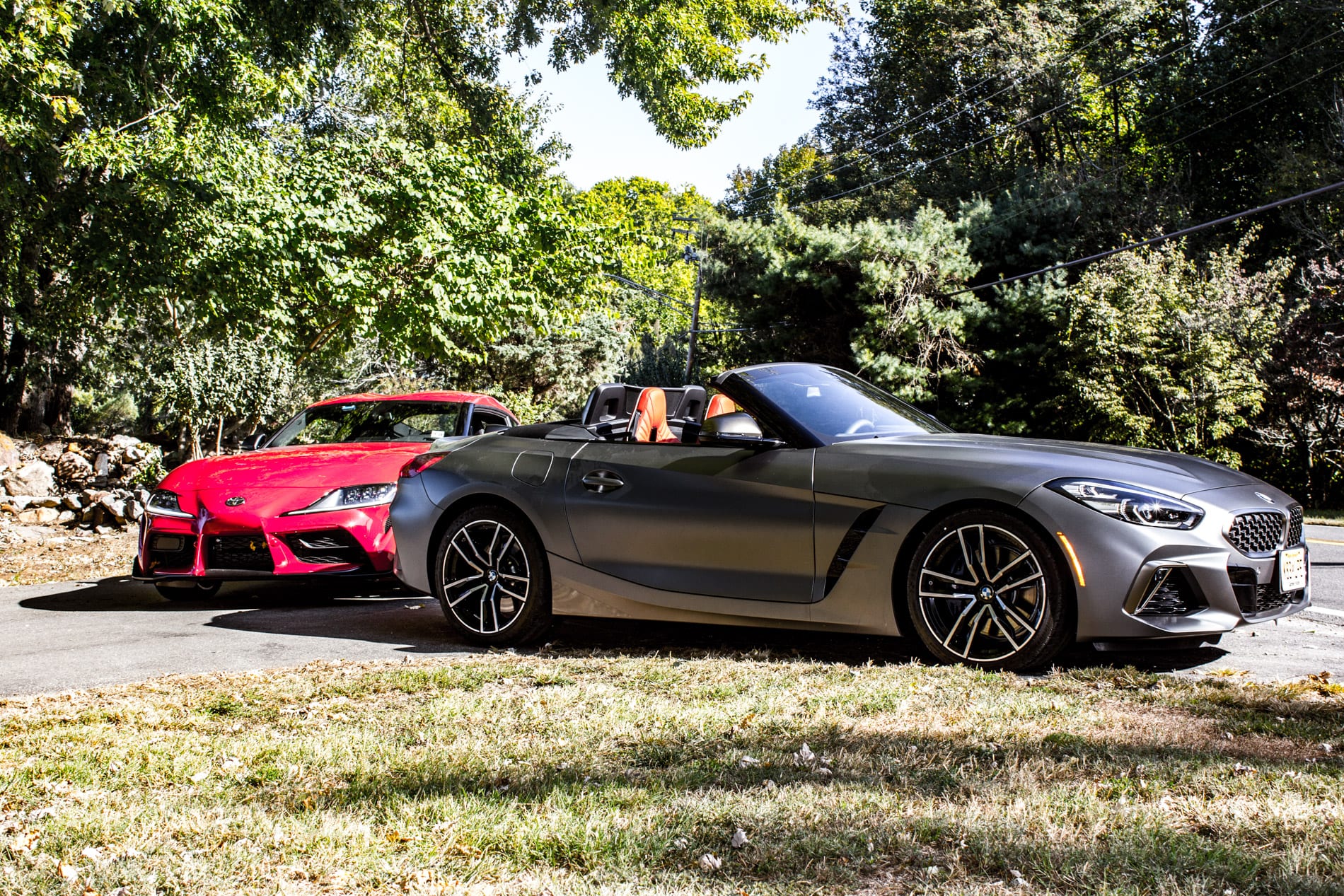 The Toyota トヨタ・スープラ or “Supra” as we know it, started production way back in April of 1978. The first generation A40 and A50 were known as the Celica Supra, a linkage that continued through the early 1980s with the A60. It wasn’t until the third generation of the car that the alignment to the Celica was severed and the A70 was born. That is likely most people’s first memory of the Toyota Supra, but as we all know it really blew up with the A80, aka the MKIV Supra, which began production in April of 1993. That production run sadly ended in August of 2002 but our Supra luck ran out here in the U.S. in 1998.

Meanwhile, the BMW Z lineup dates back to the quirky E30-based Z1, produced from from March 1989 to June 1991. They only built 8000 total and it remains an strange start to BMW’s 2-seat convertible lineup. In case you were wondering, Z stands for zukunft, which is German for “future”, at least according to Wikipedia. Five years later BMW launched the mass-production Z3, which was featured in the Bond movie Golden Eye. I recall looking up briefly from my Nintendo 64 to note that BMW had produced a cool little roadster. Based on the E36 platform, the Z3 spurred several M versions and even the future (current?) classic “clownshoe” coupe. Whereas the Supra had a long hiatus, the Z3 lasted until 2002 when it was replaced by the E85 Z4 roadster and E86 Z4 coupe and eventually the E89 Z4 produced from 2009-2016.

So we certainly didn’t start from the bottom, but both the Supra and the Z4 have had storied(ish) but different paths to where we are today. You can go buy both cars brand new in a showroom, so let’s see what’s what before we get into the drive. 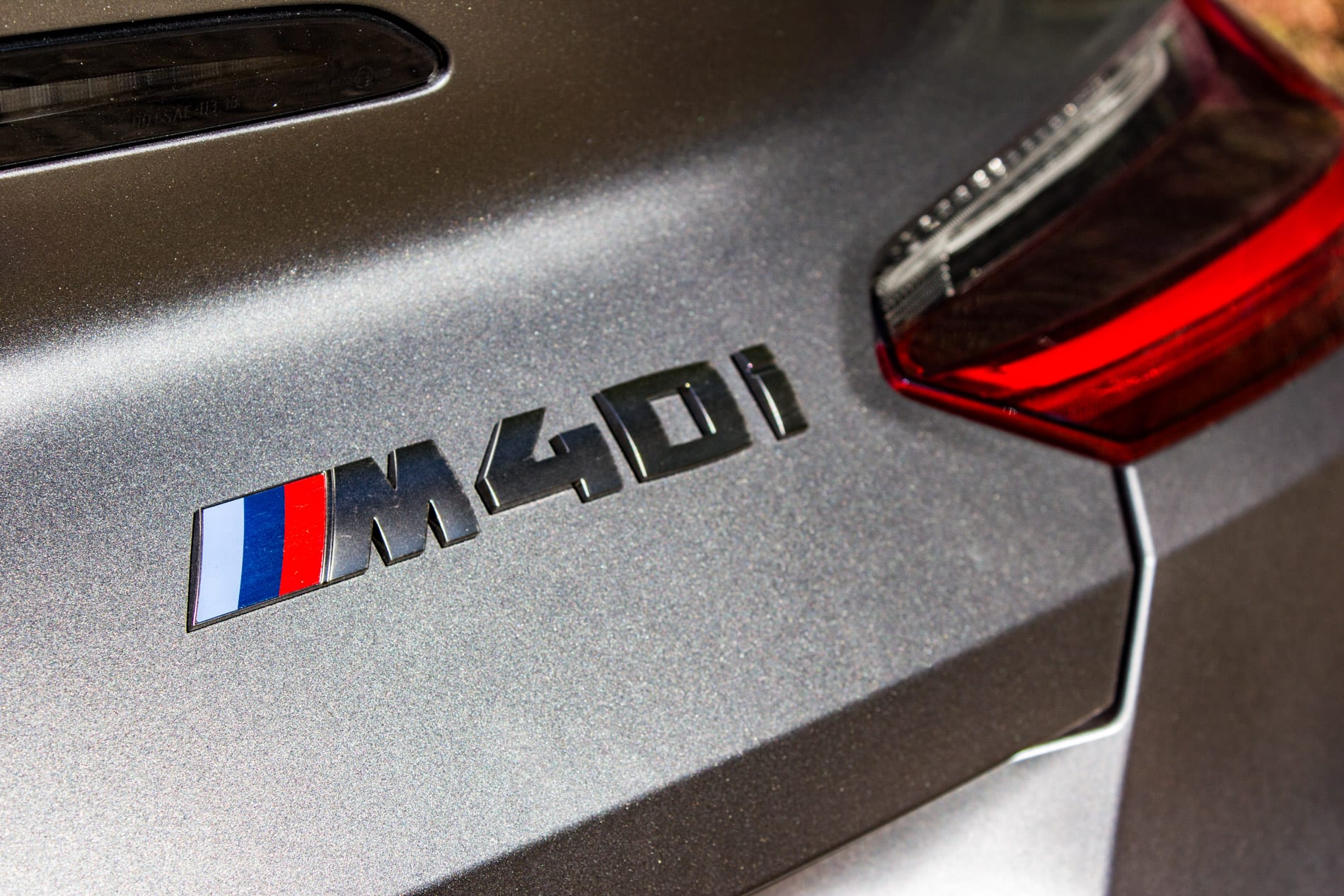 If you want a new Z4, you have two basic options, the Z4 sDrive30i, which just rolls off of the tongue, or the Z4 M40i. They look pretty similar on the outside, here take a look at the front:

Most of the difference is in the front air dam, with more angular cuts and scoops on the M40i. The sDrive30i looks like it has an overbite. Beyond that, note some slight variations in the color surround the grill. Both cars are available in six different paint colors; of note the M is also available in Misano Blue and Frozen Grey II Metallic. The latter was the color of our test car is was pretty badass, although based on the name it’s possible that BMW may be cross-promoting with Disney for the upcoming Frozen sequel. Sorry, I’ll let it go.

From behind, both cars look pretty much the same. The M40i has slightly larger duct work and a different exhaust shape.

Obviously the largest difference in these two cars is the engine. The sDrive30i comes with a 254 horsepower 2.0L turbo 4-cylinder that BMW calls “TwinPower” which likely has nothing to do with Mary Kate and Ashley Olsen, but I can’t confirm that. What it doesn’t mean is twin-turbo, it’s really a single twin-scroll turbocharger. BMW claims 5.2 seconds 0-60 for the sDrive30i. The M40i that I drove is powered by a 382 horsepower 3.0L twin-turbo inline-6 with a BMW-claimed 3.9 seconds to 60. Pricing is $49,700 starting MSRP for the 30i and $63,700 for the 40i.

I won’t spend too many words on the interior. It’s a BMW, it’s nice. 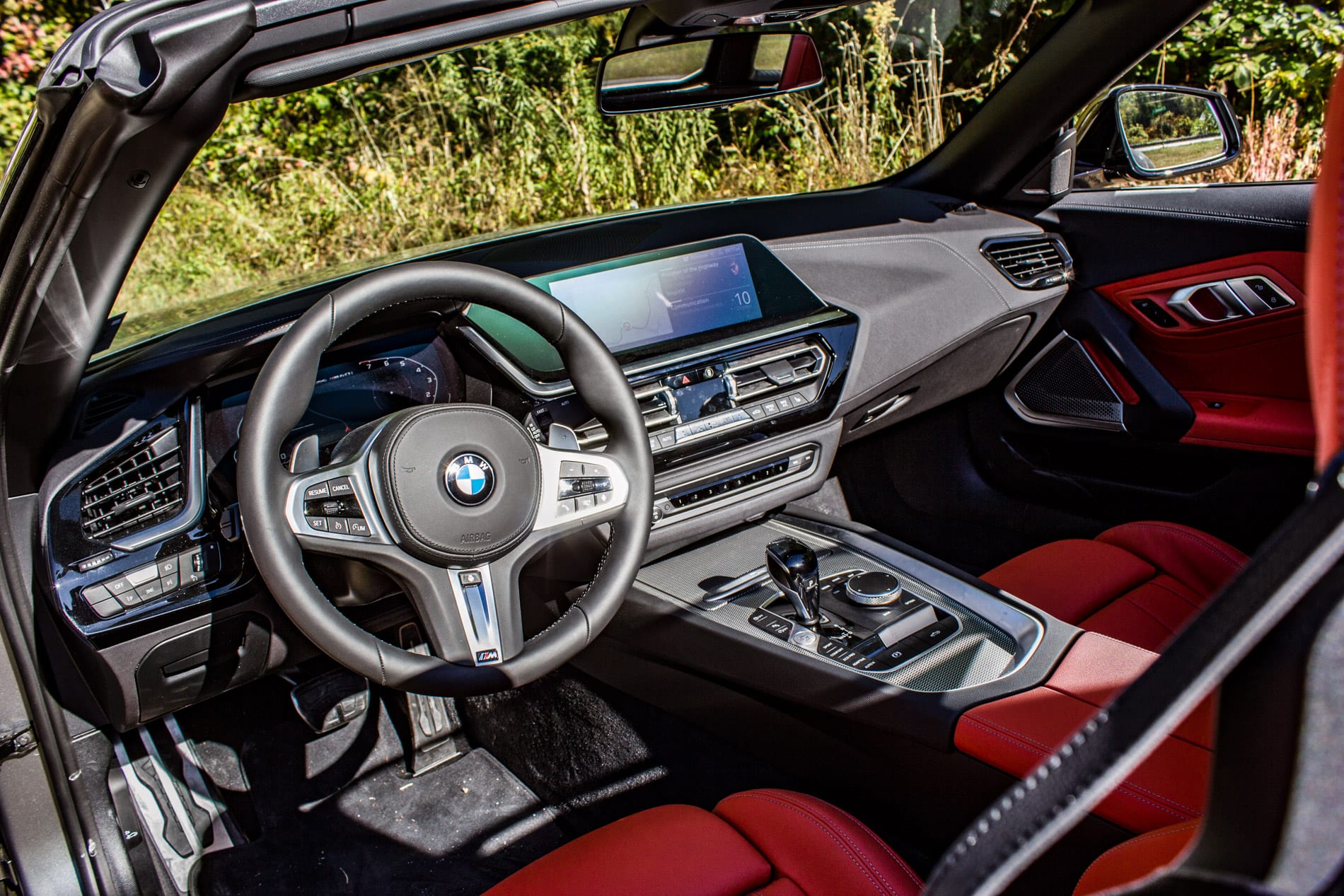 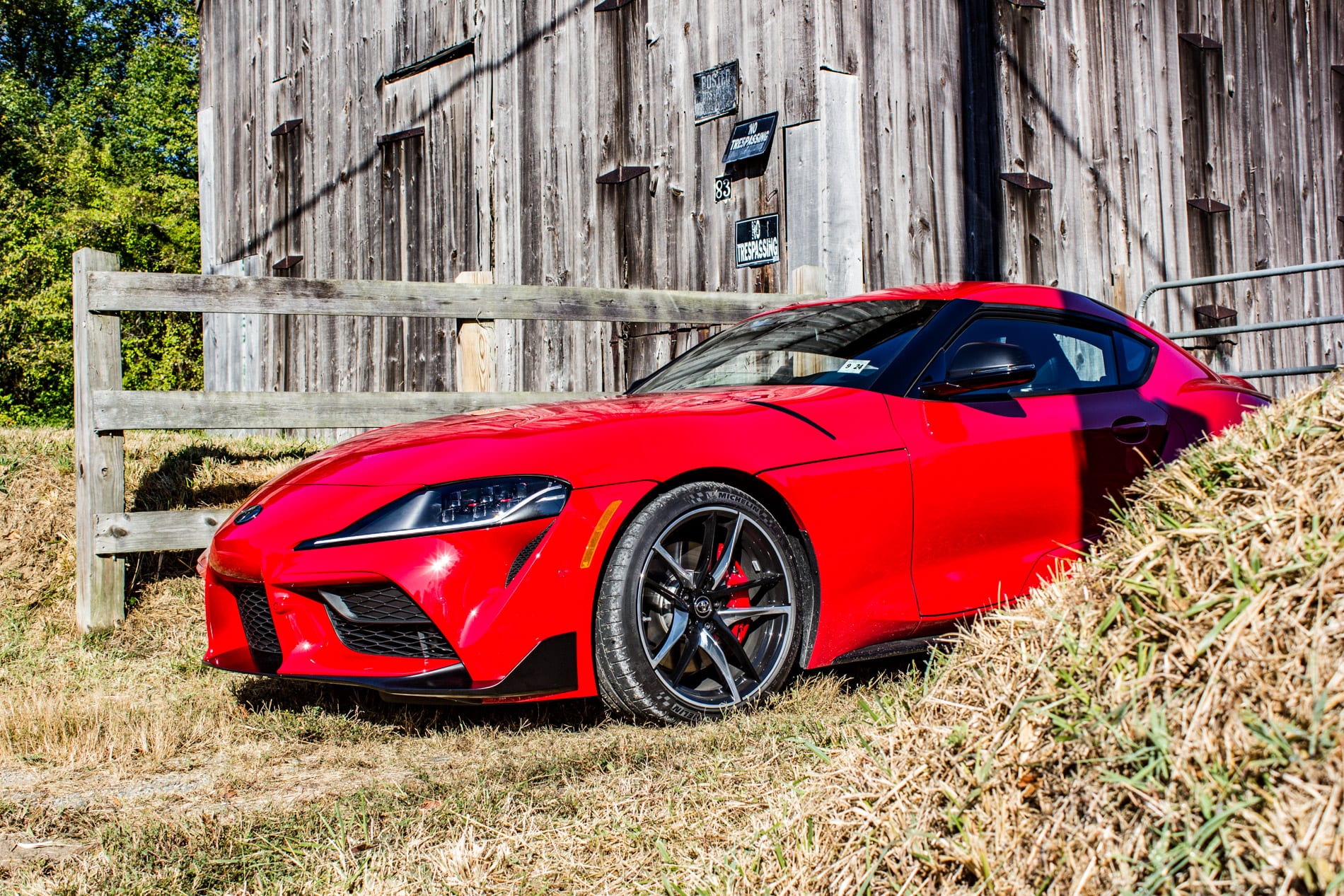 The new Supra is slightly more complicated with three versions available at launch: GR Supra 3.0, GR Supra 3.0 Premium, and the GR Supra Launch Edition. As a reminder, “GR” stands for “Gazoo Racing”, which is Toyota’s race team. Just like the BMW, the variations as seen from the outside are slight in most cases.

It’s like one of those electronic bar games, can you spot the differences! When in doubt, check the mirrors when you are Supra-spotting. It’s hard to see in these images, but the 3.0 Premium has lighter colored side-mirrors and obviously a launch edition has red. From the back, it’s even harder to spot the differences.

All Supras come with a similar, but not identical, 3.0L twin-scroll single turbo inline 6-cylinder engine, but with 47 less horses than the BMW (335 hp). The engines use the same crankshaft and bearings, but the cylinder heads, pistons and connecting rods are different. The turbo is technically different as well, the Z4 shares its turbocharger with the BMW M340i, while the Supra shares its with the European-spec BMW Z4 M40i. Pricing for the base GR Supra 3.0 is $49,990, with the 3.0 Premium starting at $53,990, and the Launch Edition will be starting at $55,250 (only 1500 are coming to the U.S.).

The Supra also has an interior. It’s also nice and varies slightly across different trim levels. 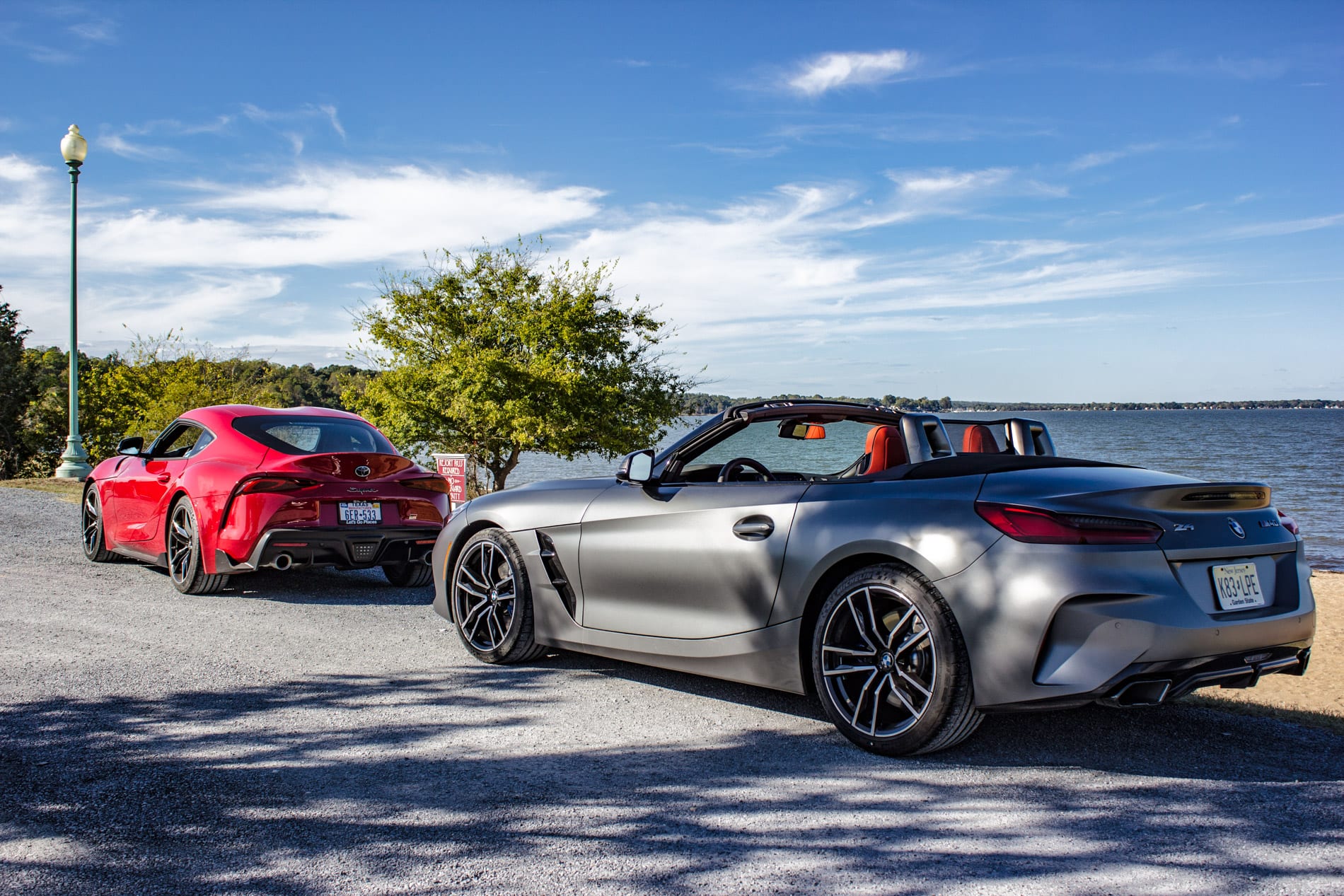 Specs and figures are one thing, but how do two cars that share almost identical mechanical bits drive head-to-head? Surprisingly different, that’s how!

The first reason is because of the variation in body type, with large difference in overall feel between Toyota’s coupe and BMW’s convertible. That’s not to say that the Z4 isn’t sharp, it is, but with a hardtop and less weight the Supra felt better on our curvy back road test loop we dubbed the “touge”. And yes, there were loud shouts of “Tooouugeeeeeeee!” each time we approached the stretch of road. 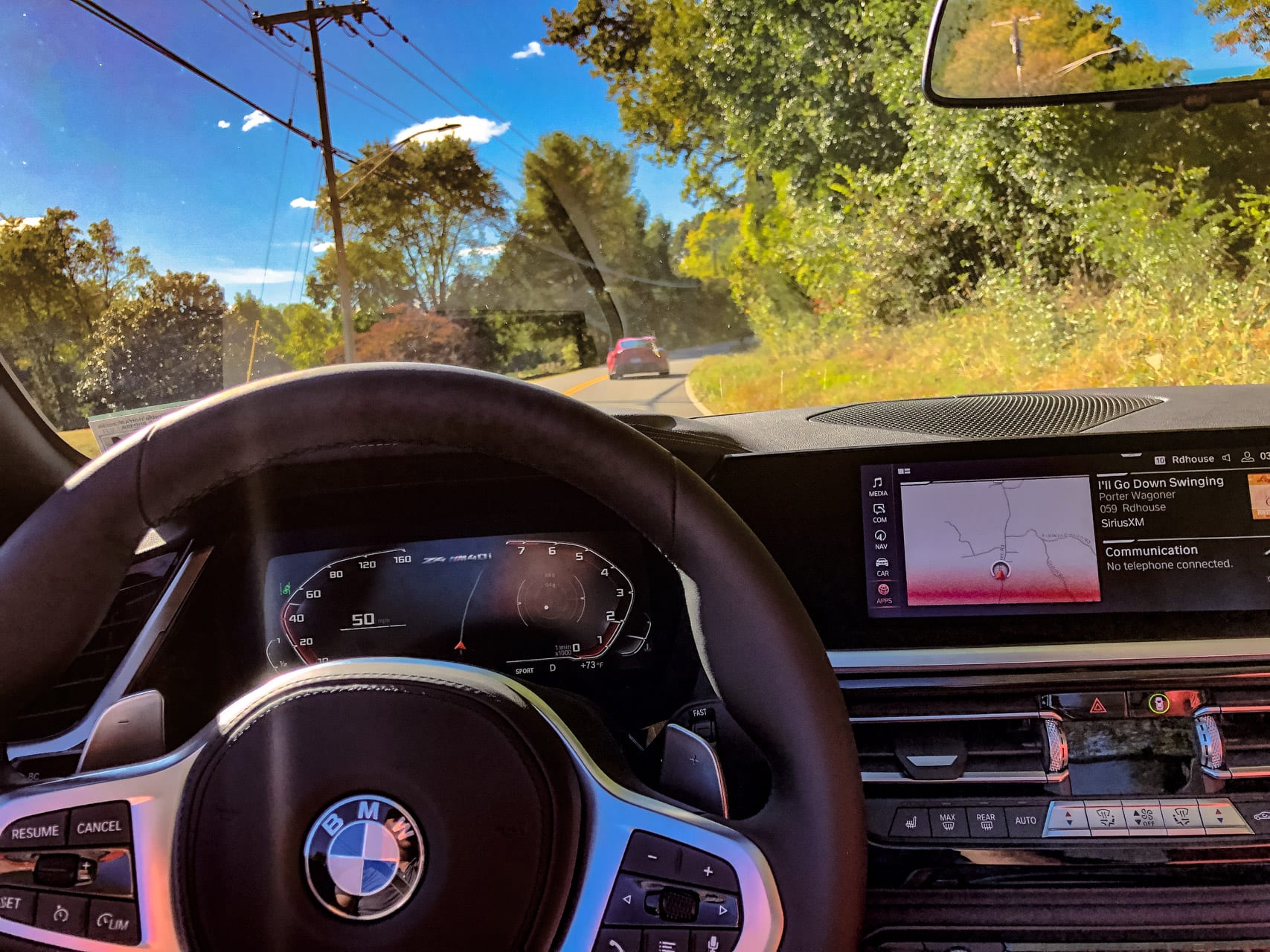 In a post-hydraulic steering era, most journalists banter on about whether you can feel anything through the wheel, so I’ll skip that bit. In this case, I evaluated each car on how well it functioned through our test loop. I really liked the steering in the Z4, particularly in Sport mode, but it wasn’t drastically better than the Supra. I was able to get the Supra to step out a couple of times, with slight oversteer that improved the overall experience significantly.

Having both cars pushing hard on the same road, at the same time, really helped frame the issue here – neither would significantly outrun the other. Not a huge surprise, and there could always be variations in driver ability, but my journalist sparring partners Joel Patel and Will Kinton had their shit together. I imagine that there were teams of engineers from both companies sitting in conference rooms making advanced calculations to ensure that these cars remained competitive with one-another on track. Although I prefer to believe there was a late night saké and weissbier drink-off, last person standing got final say. It was a draw. 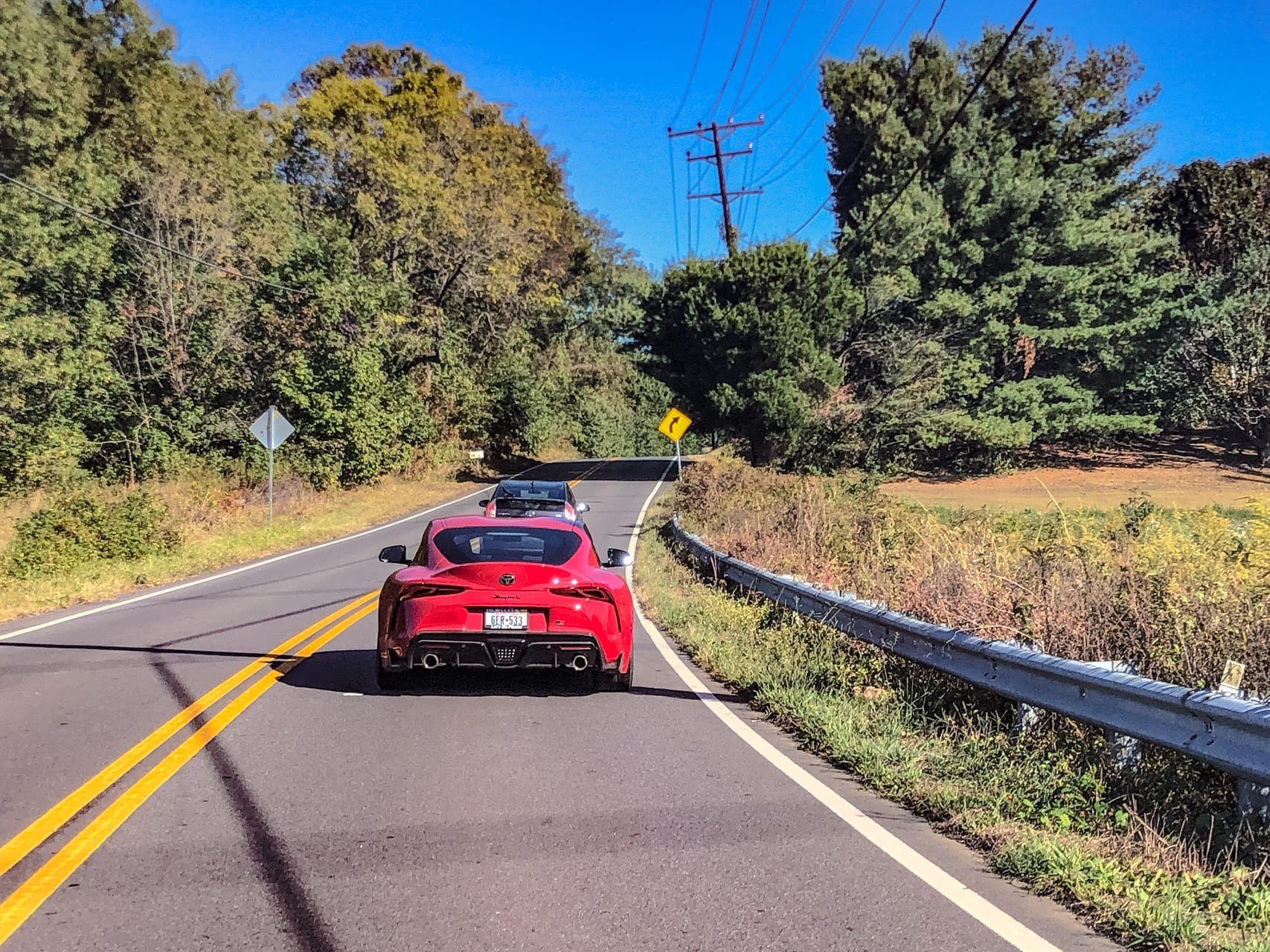 With regard to power, the elephant in the room is clearly the nearly 50 horsepower gap between the two cars. Only it actually disappears in the real world. Many magazines have tested the two cars as having nearly identical 0-60 times, a tad under four seconds. The weight difference between the two cars seems to have dissipated some of the Z4’s power advantage, and that came out in our real world test too. On longer stretches, when there wasn’t a Prius in front of us, neither car could pull away from the other. Same went for the tight switchback roads, the transmissions functioned well to keep the power in the right spot. Leave it in automatic mode and thumb the “Sport” setting and both cars generally found the right cog to keep you moving quickly. Of course the paddle shifters were more fun, and of course we lamented the lack of a manual option, as one does.

The Supra makes fun snap and pop sounds from its exhaust along the way. Sure, it’s a bit of theater, but it’s fun and made for a more exciting driving experience.

There has to be a winner and a loser. There can be only one! In this case, the winner is the Toyota Supra. While the Z4 is a great car, likely the best non-full-M version of any Z3 or Z4, it still felt a bit anonymous compared to the Supra. Perhaps there is some “OMG90s” nostalgia happening for me here, but driving the Supra felt like an event. A group of kids along the side of the road (who should have been in school) exclaimed “What is that!!” when we were making a hasty u-turn in their driveway. Toyota actually delivered on producing a car that looked like the FT-1 concept from 2014. Many lament the notion that it doesn’t look more like an MKIV Supra, but I’ve already seen some cool aftermarket add-ons that fix that with a big wing.

Plus, I haven’t even gotten to the price difference. The Supra starts at just under $50,000 which isn’t cheap, but from an inflation standpoint is actually way cheaper than the last MKIV we had in the states. A 1993 twin-turbo Supra cost $40,890 which is $72,656.58 in 2019 monies. So the Supra would win this competition outright just based on price compared to the $63,700 starting price for the Z4 M40i.

Add all that to the fact that it’s an amazing car to drive, and I am very much able to forget that it’s built in Styria, Austria by Magna Steyr for BMW. And you should too, because the new Supra is here, and it’s fantastic. 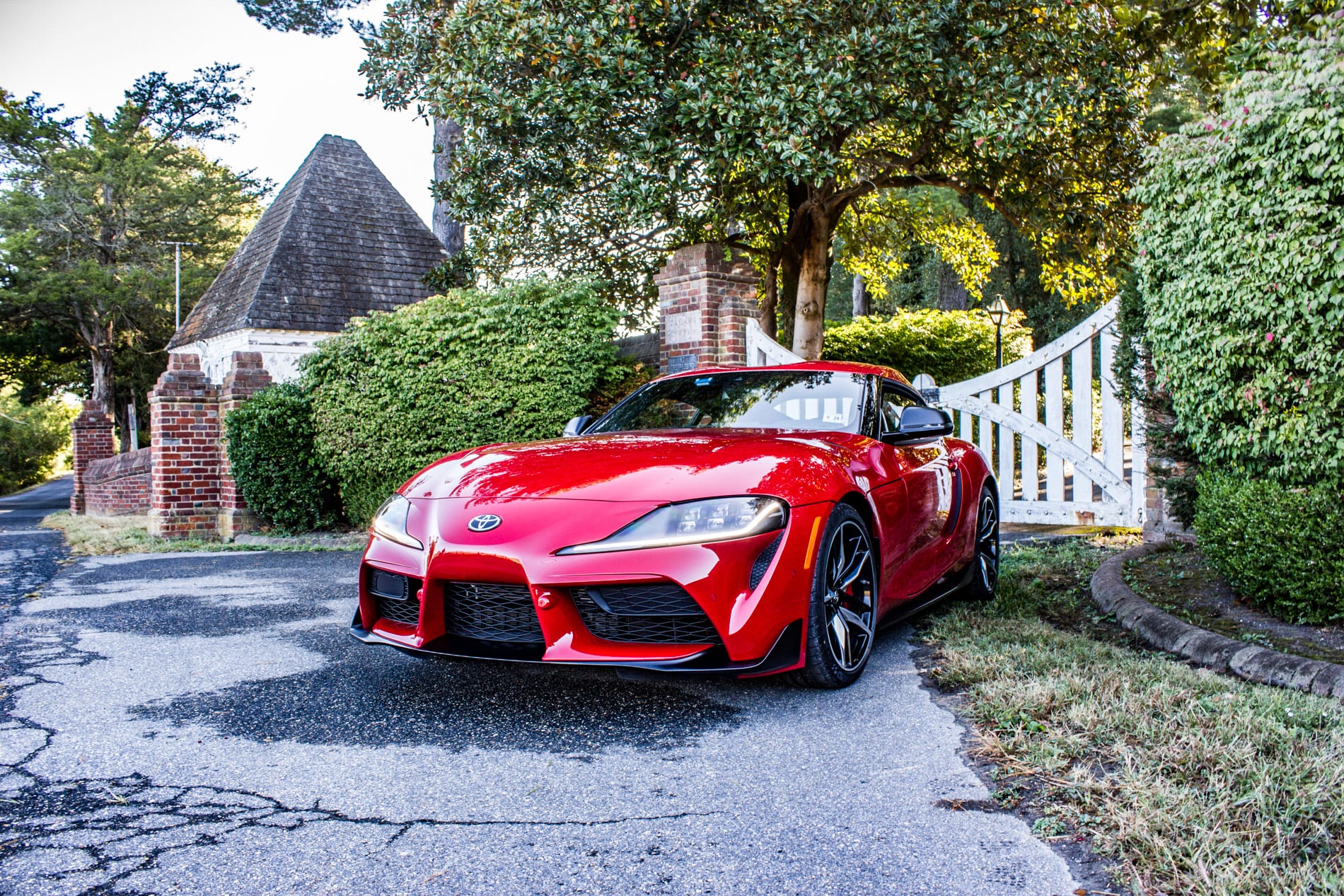 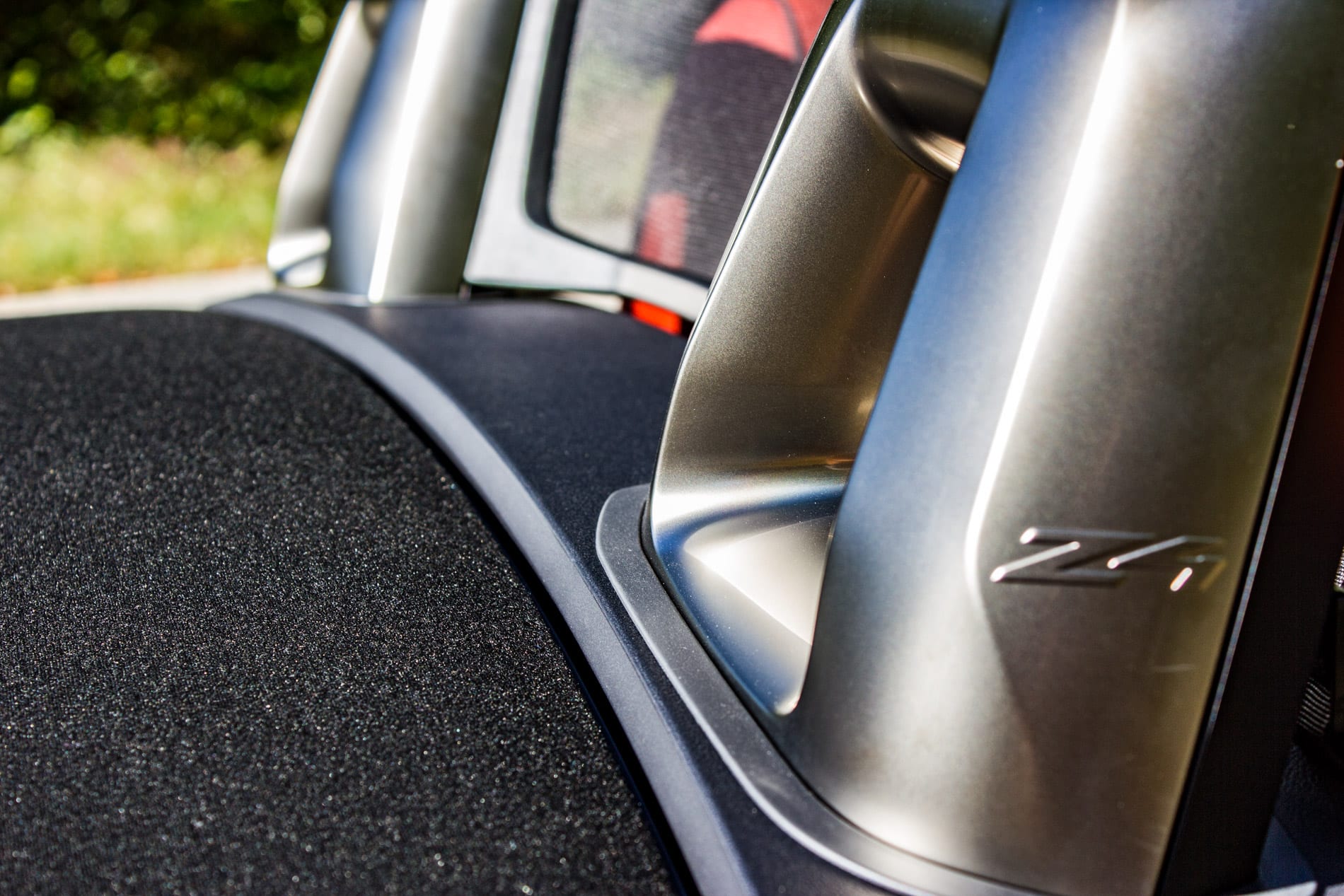 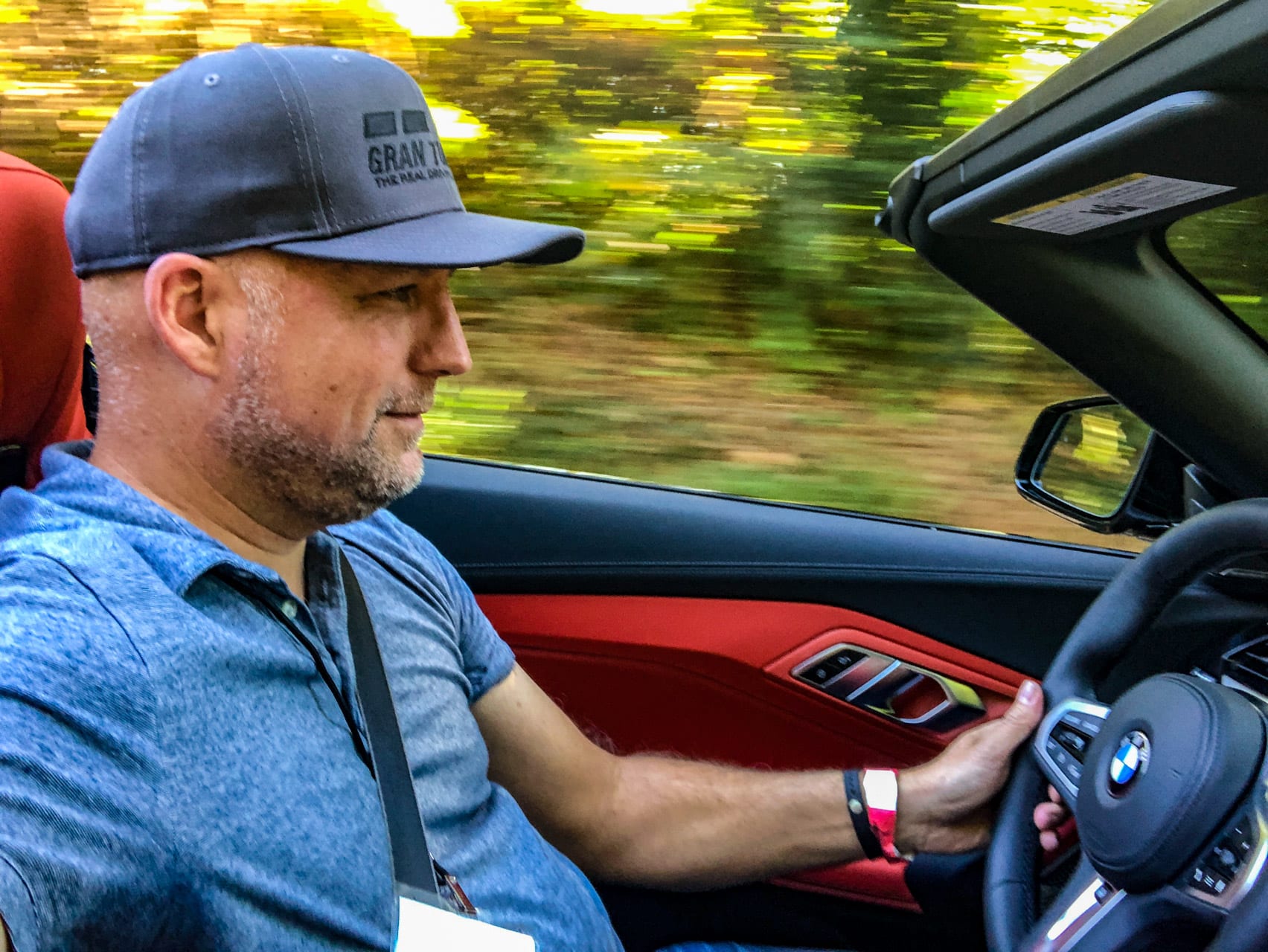 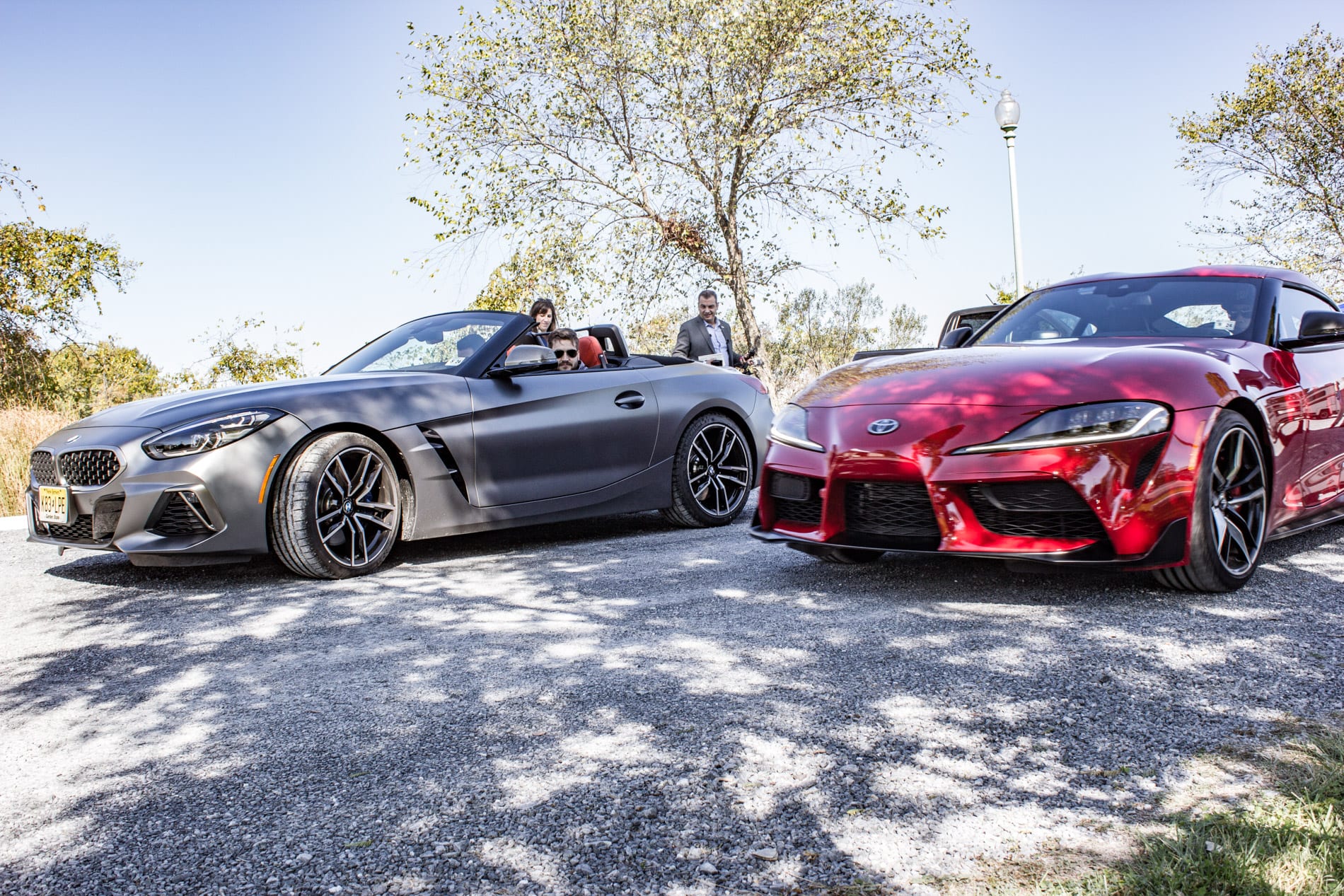 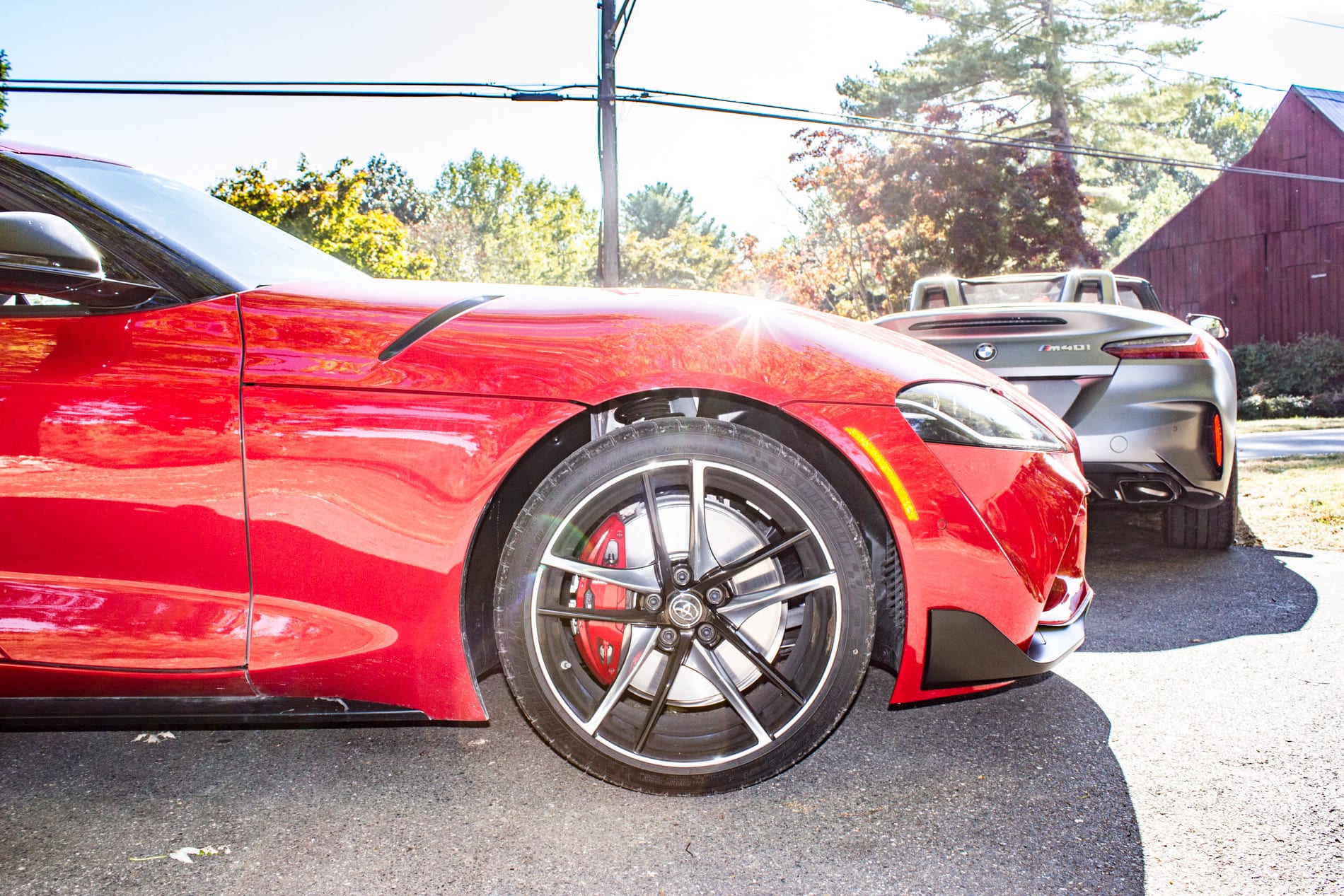 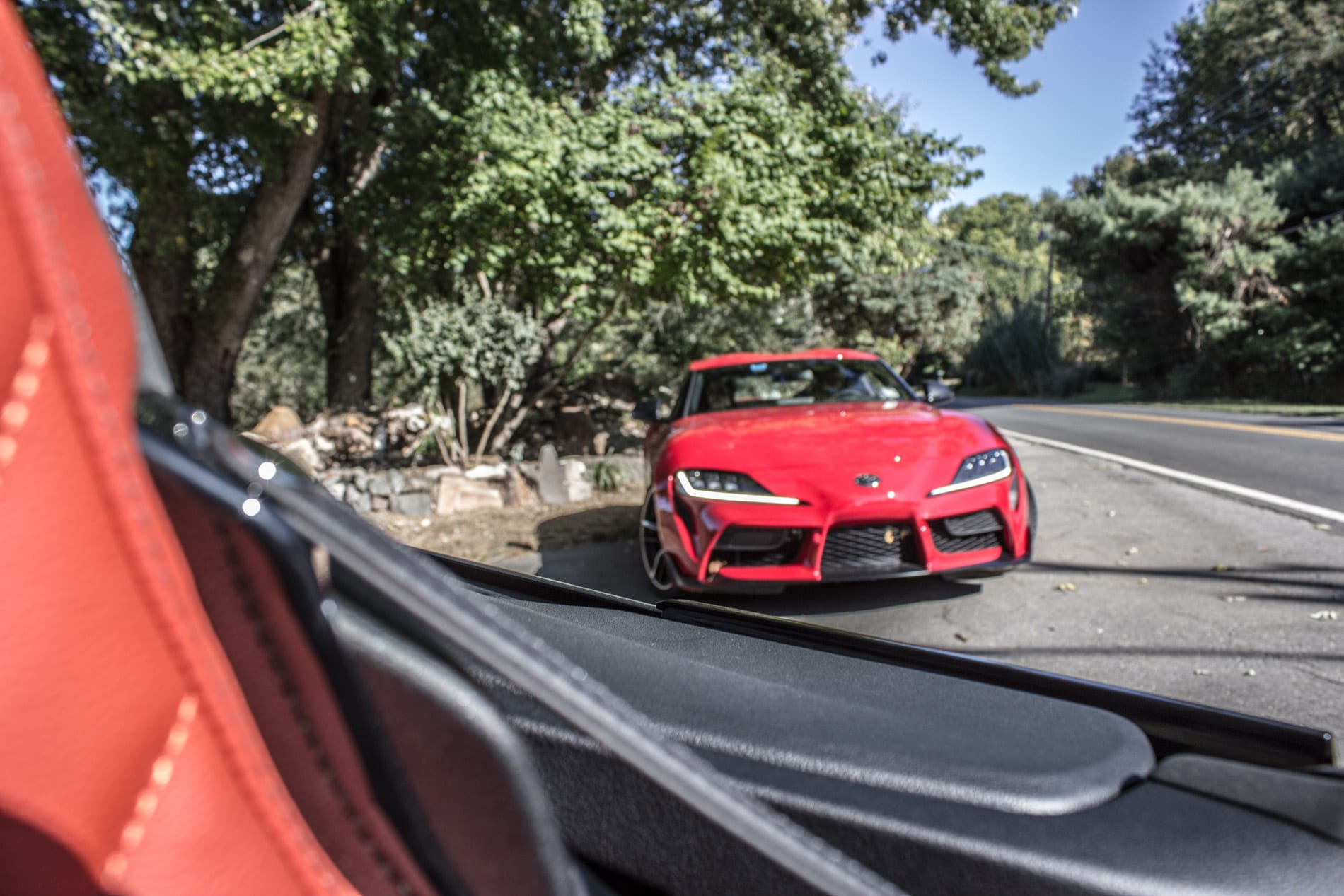 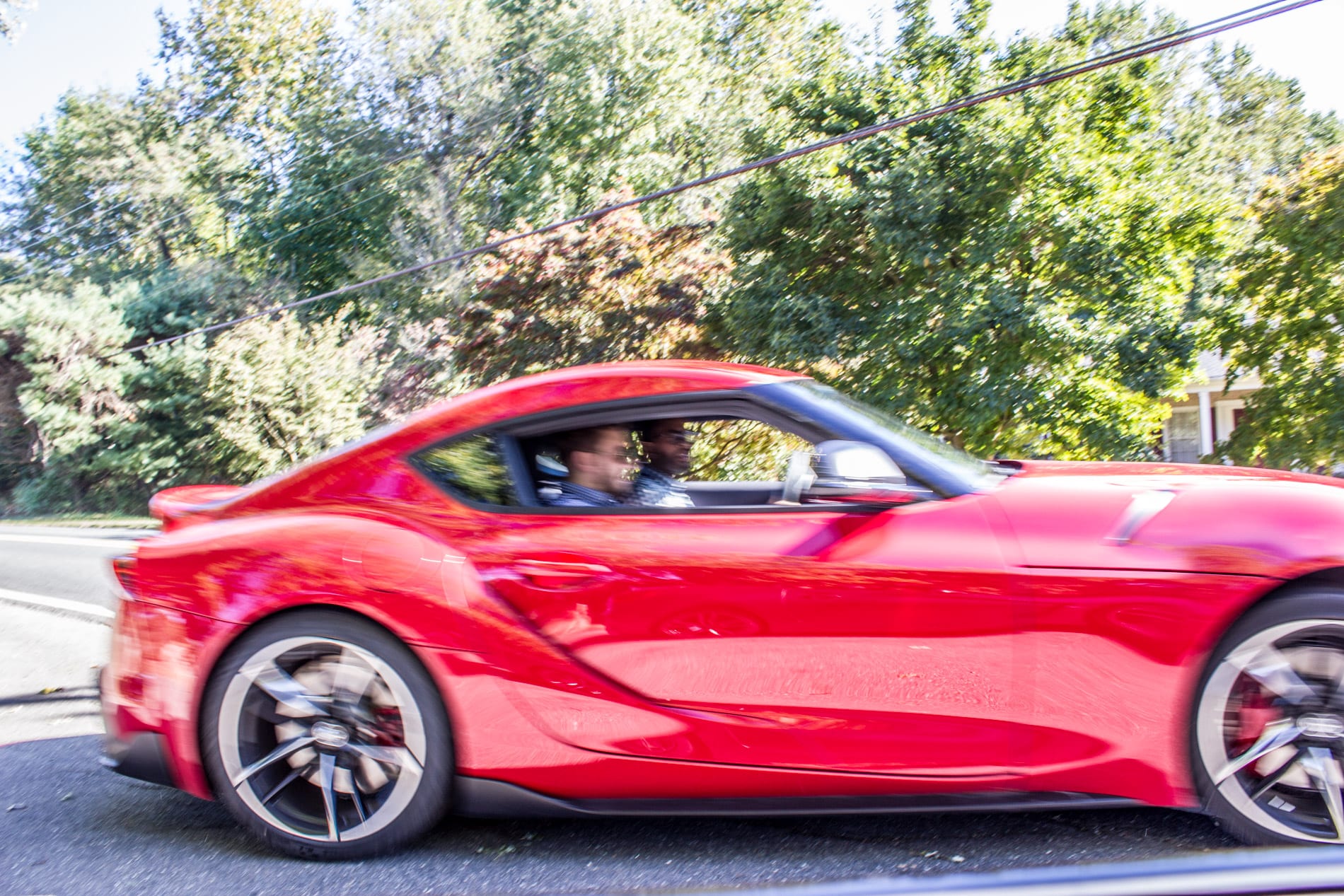 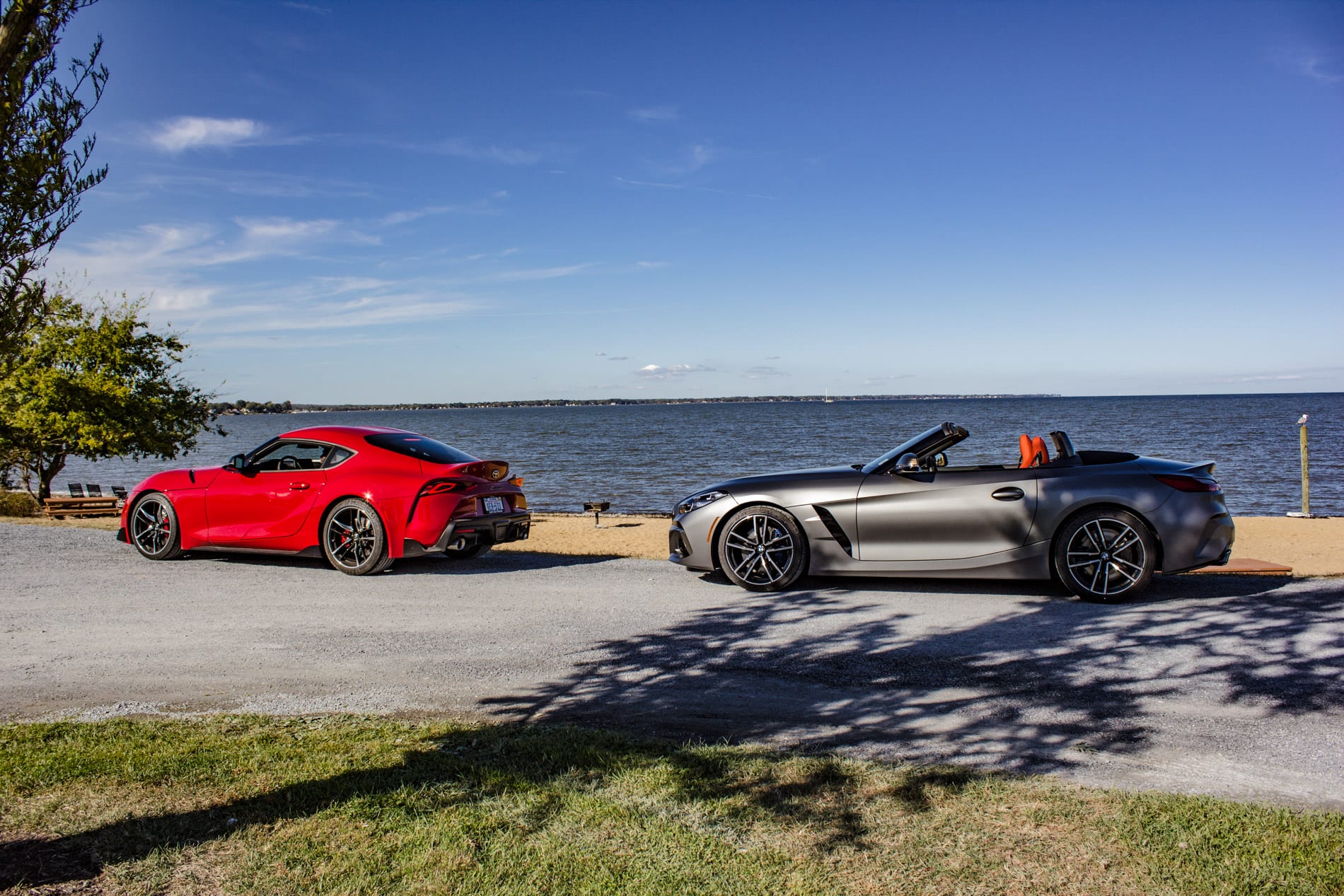