Right up until the Kia Telluride came out, if someone asked me what was my go-to three-row crossover choice, I would have said the Highlander in XLE trim.  Several years ago I had the XLE and Limited trims nearly back to back to review, and put 700+ miles on the Limited model. This included a trip to Suttons Bay, north of Traverse City for a long weekend with my wife. 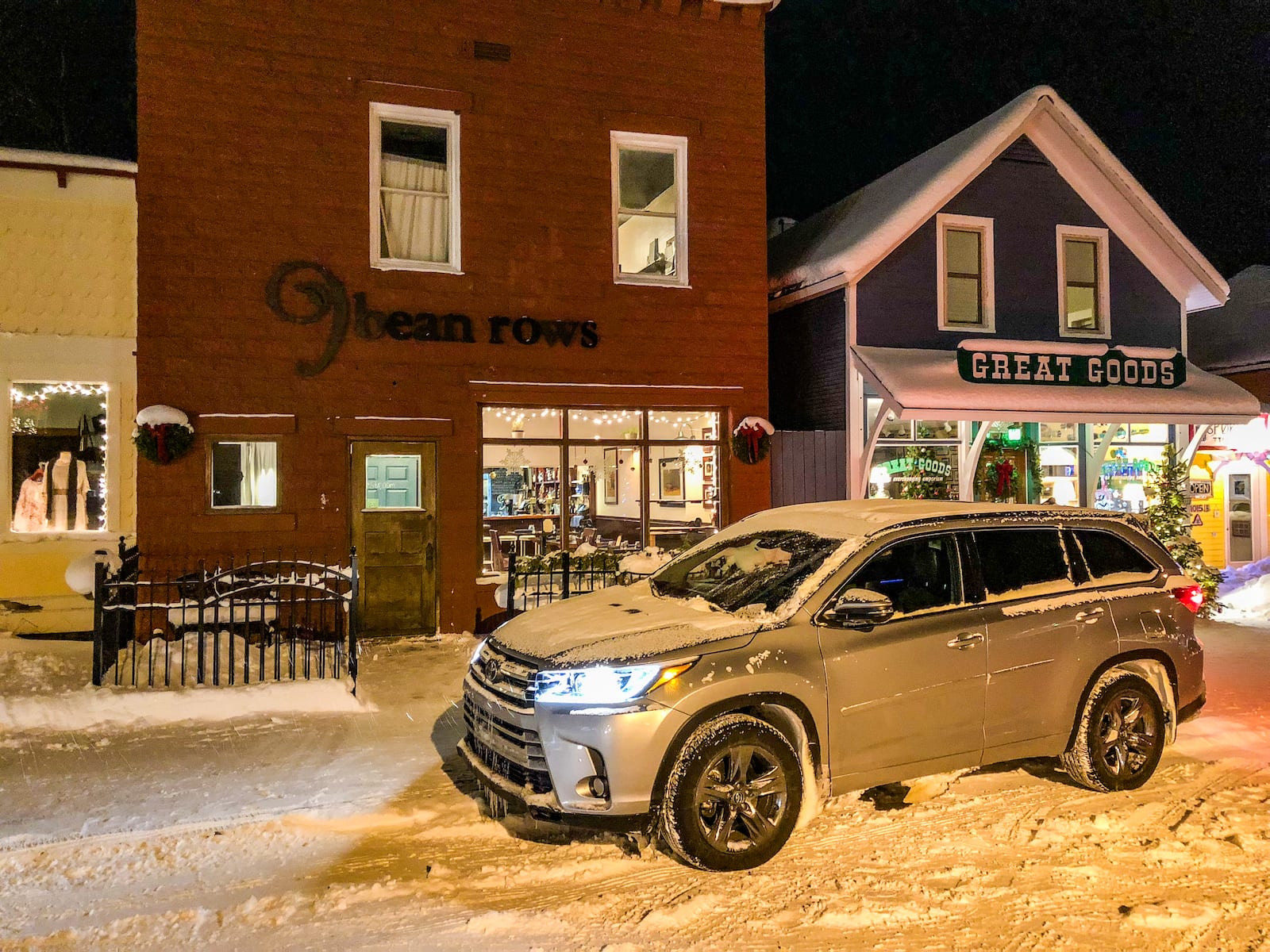 While the Limited was nice, I couldn’t see the $5,000 price jump between the XLE and Limited.  Other than that, it was a really good crossover that stood out amongst all the others in the category.

Comes the Telluride, and, well, mic drop.  I was skeptical about the Telluride, even though everything looked fantastic on the surface.  But, it lived up to the hype.  Now, it’s Toyota’s turn to counter.  Did they come up with something that could retake the crown?  Could it even make the podium given the Hyundai Palisade, Subaru Ascent, and a few others?  It’s here we get into that whole, “from a certain point of view” philosophy.

Let’s just say that the arrival of the Subaru Ascent, while the Highlander Hybrid was in the driveway, made me rethink a few things.

Doubling down on the rugged look

Where most companies keep softening the look of their large crossovers to make them look more friendly, Toyota has really gone for something drawing from the Tundra and Tacoma.  Much like they did with the new RAV4 styling, the overall look is aggressive and macho. 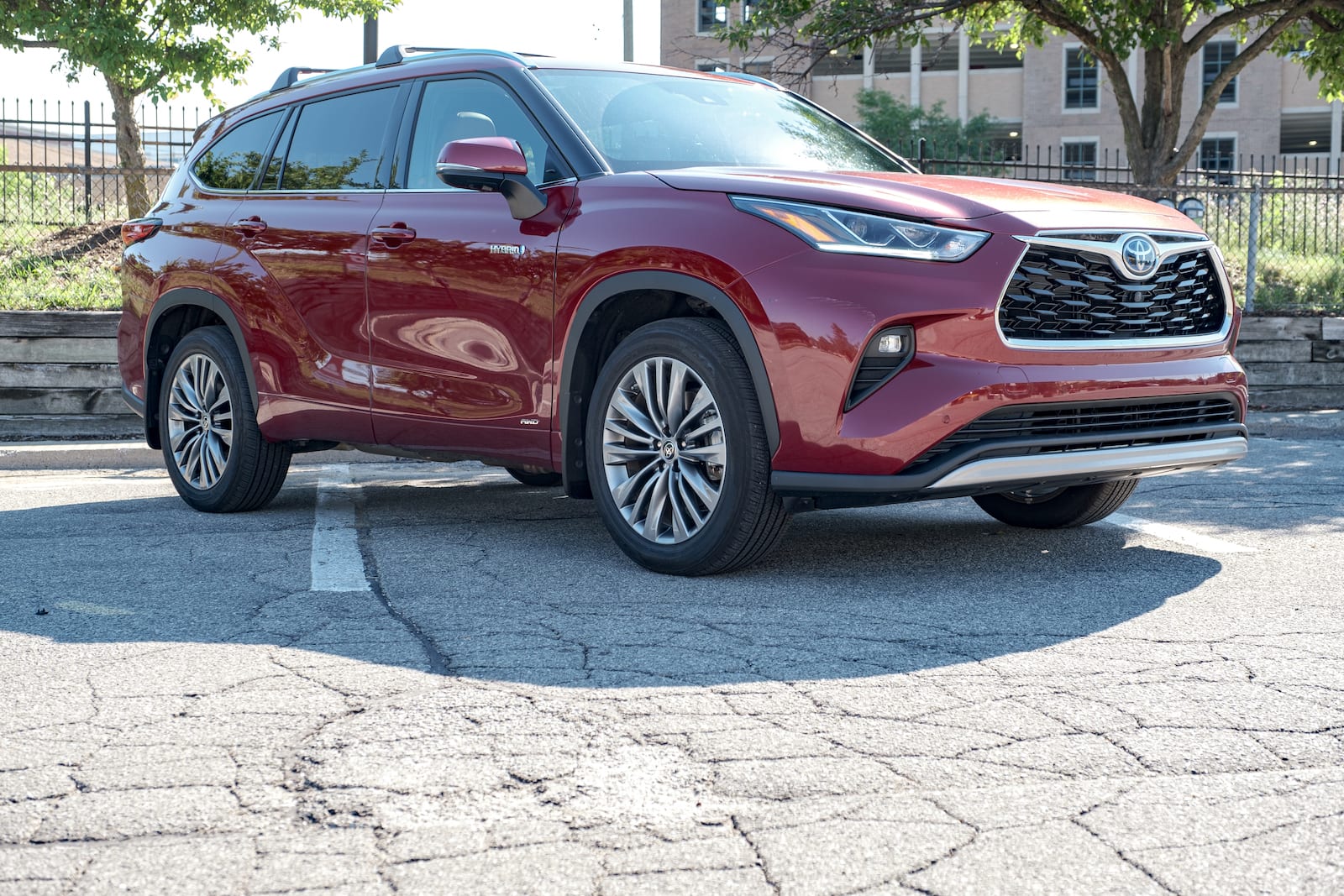 In the front, the combination of the swept-back headlights, the trapezoidal grille, the body cut for the fog lights, and the cut of the lower portion of the front valance give it an angry pissed off look.

From the front three quarters as well as the side view the wheel arches bulge out, the top glass line along the side slopes down at a slight angle where the bottom on sweeps up at an angle to give it a sense of forward motion. The rear three-quarter view really emphasizes the pumped-up physique whereas the view of the rear has a nicely tailored look.

The exterior styling might be too aggressive for some, but props to Toyota for making a soft-roader not look like one.  Unlike some Toyotas of late, the designers did put away the pencil and didn’t busy it up with too many character lines.  It’s fairly cohesive. 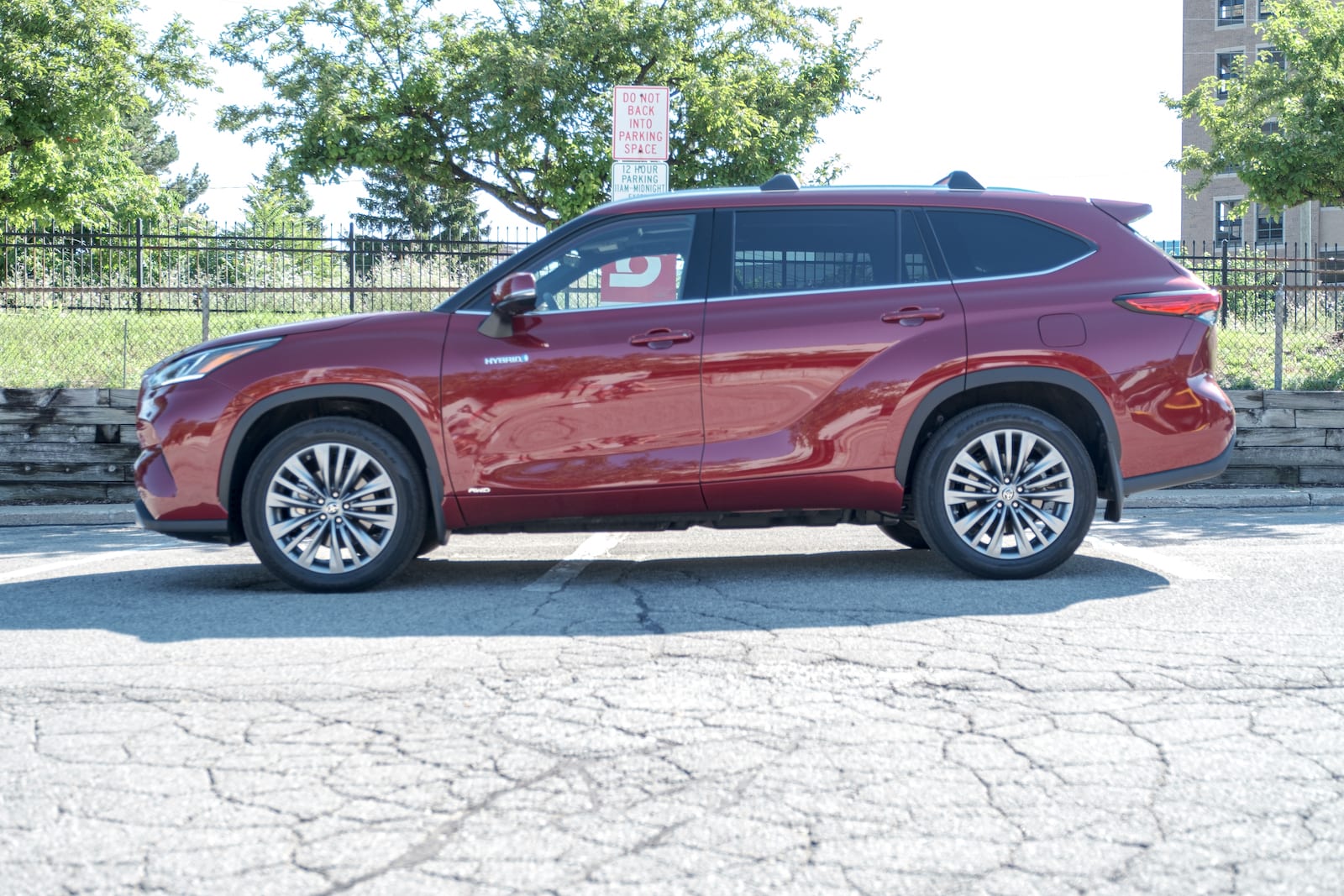 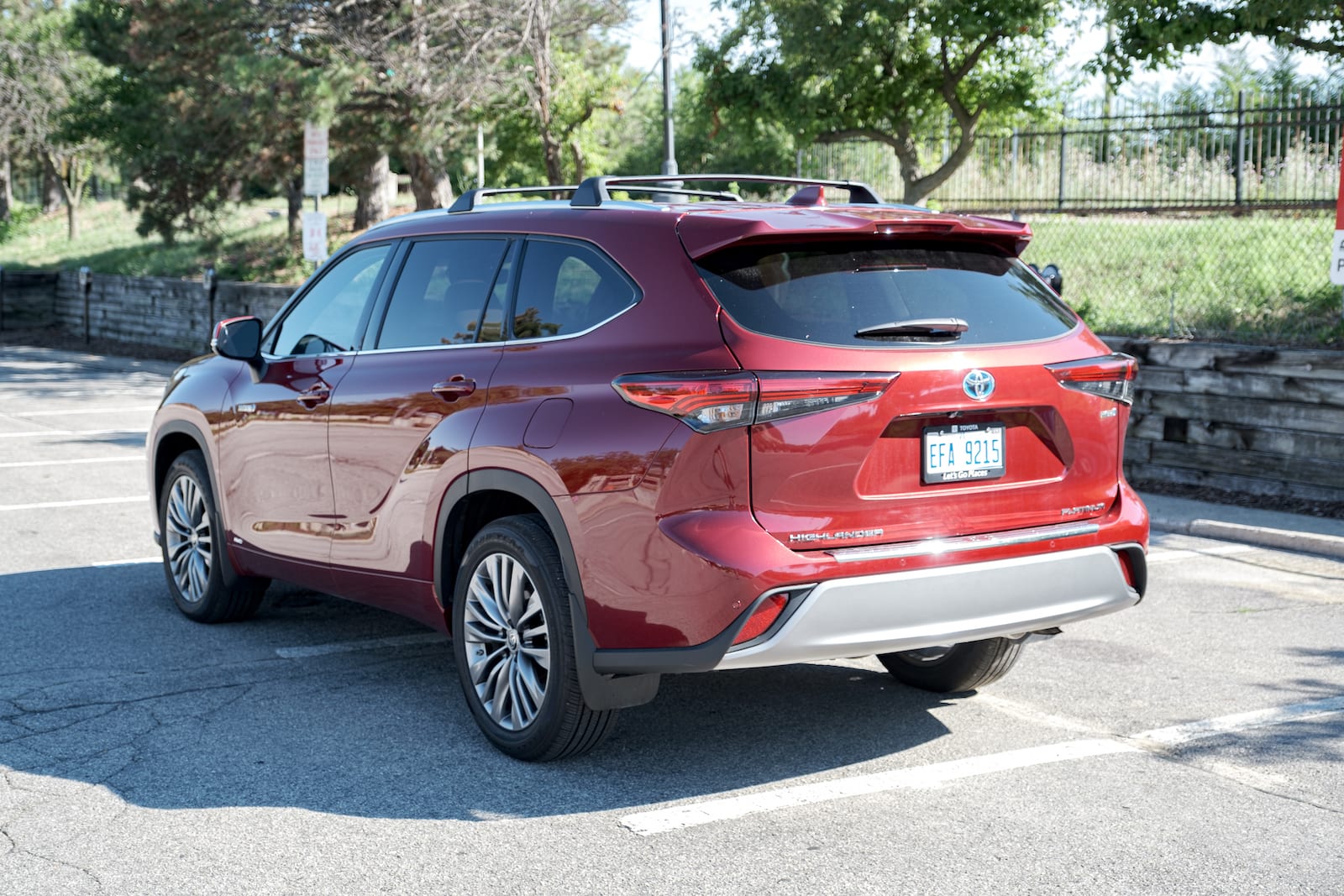 Inside it’s all about the details

The Highlander Hybrid that I had in for review as a Platinum level trim.  The overall design of the interior works well.  The large panoramic sunroof when coupled with a light-colored interior presents a very airy cabin.  At the major touchpoints, the materials are good, and there is some detail stitching that looks nice as well. 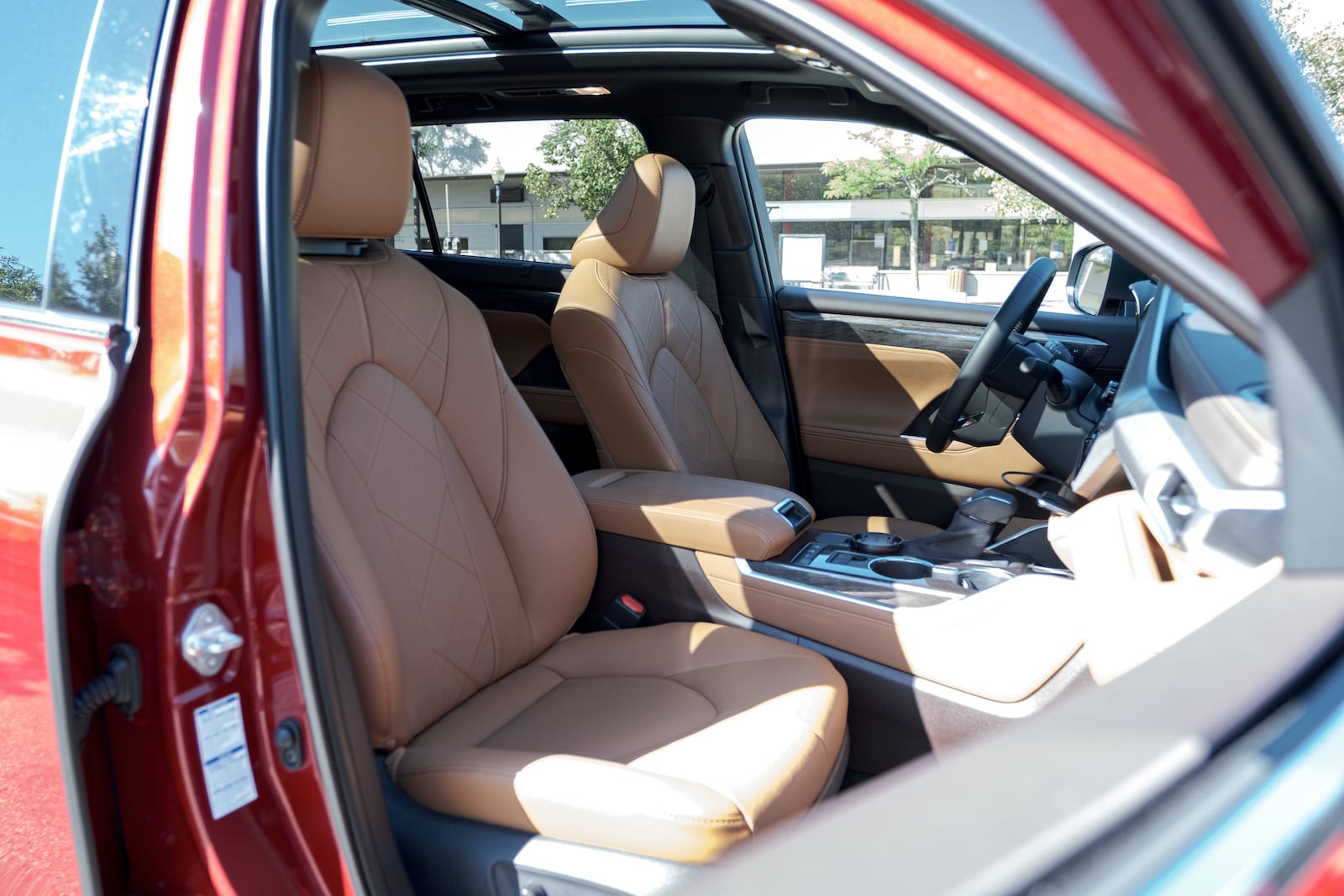 At the as-tested price, there is too much hard plastic in the interior.  Granted it’s not found in the major touchpoints, but spend more than ten or fifteen minutes poking around the interior and you will see a lot of it.

The lower portion of the door is a lower grade of plastic than you’d expect at this price point.  As well, the “wood” trim that was obviously not. 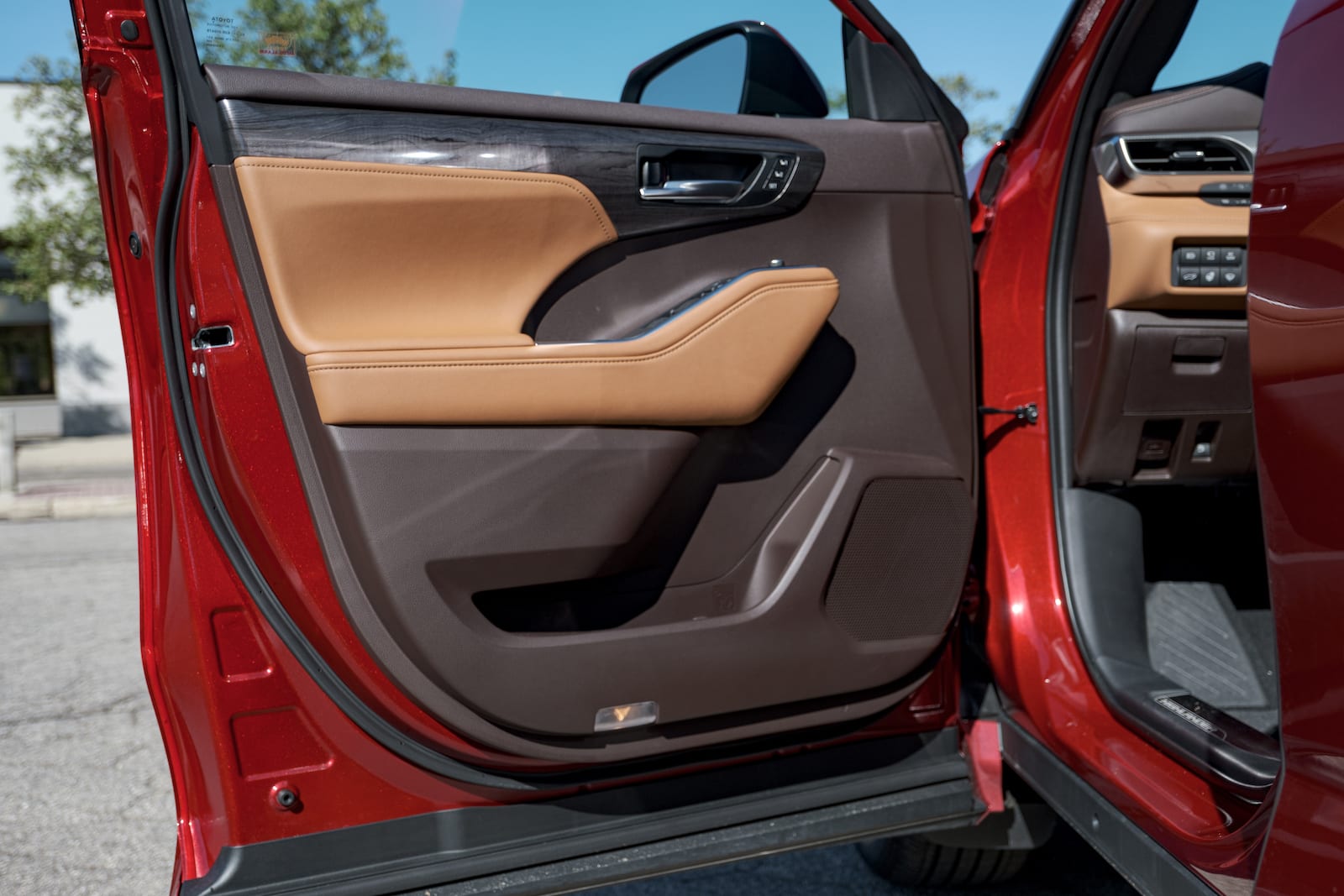 What I did like was the tiered system Toyota has done below the infotainment system.  It offered a good place to put your phone where it wouldn’t slide around or go flying off somewhere.  It also allowed for good cable management if you wanted to plug your phone in so that you could use Apple CarPlay.  If you don’t care about CarPlay the Highlander Hybrid does have a Qi charger.

I used Toyota’s built-in UI as well as CarPlay, and I do prefer CarPlay but the gap isn’t that large.  The sound quality of the stereo was more than good enough for the people who will be buying the Highlander. 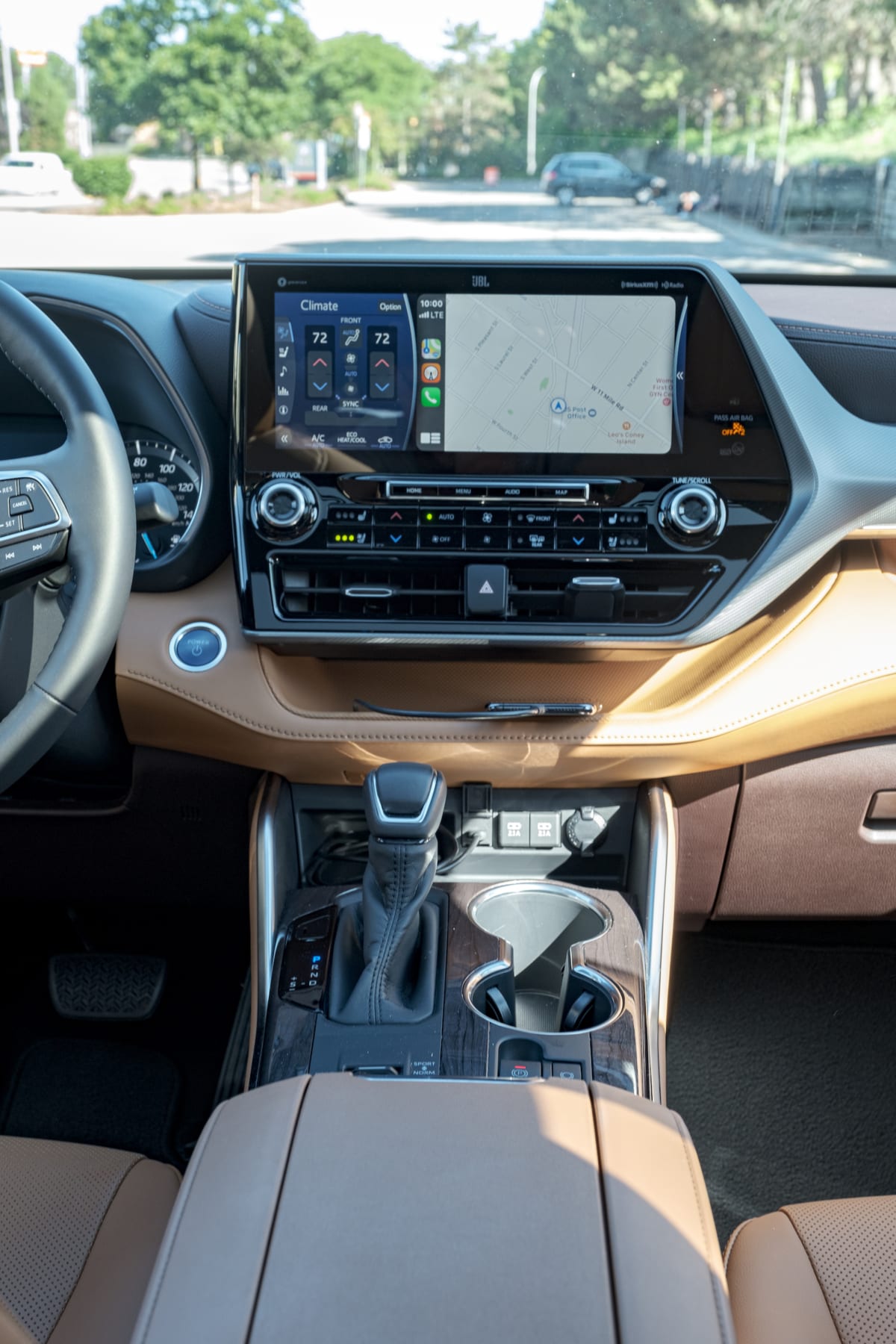 Given how much glass the Highlander has, and that I had it in near the end of July the A/C system had a good workout.  What I was most impressed with was that I rarely had to turn the HVAC system below 72ºF to be comfortable.  Most vehicles of late you need to be in the mid to high 60’s for a similar level of comfort.  The coatings that Toyota is using on their glass are doing a good job of keeping the heat out of the cabin.

As good as the A/C was, the cooled seats did very little even on their highest settings.  It was difficult to tell they were even on.

This Platinum trim level comes with Captain’s chairs in the second row, I’ll save my usual rant about the uselessness of these.

What I will say is that to fold the seats flat is fiddly.  In fact, the whole operation of the second-row Captain’s chairs is fiddly.  A rethink needs to be had with how they operate. 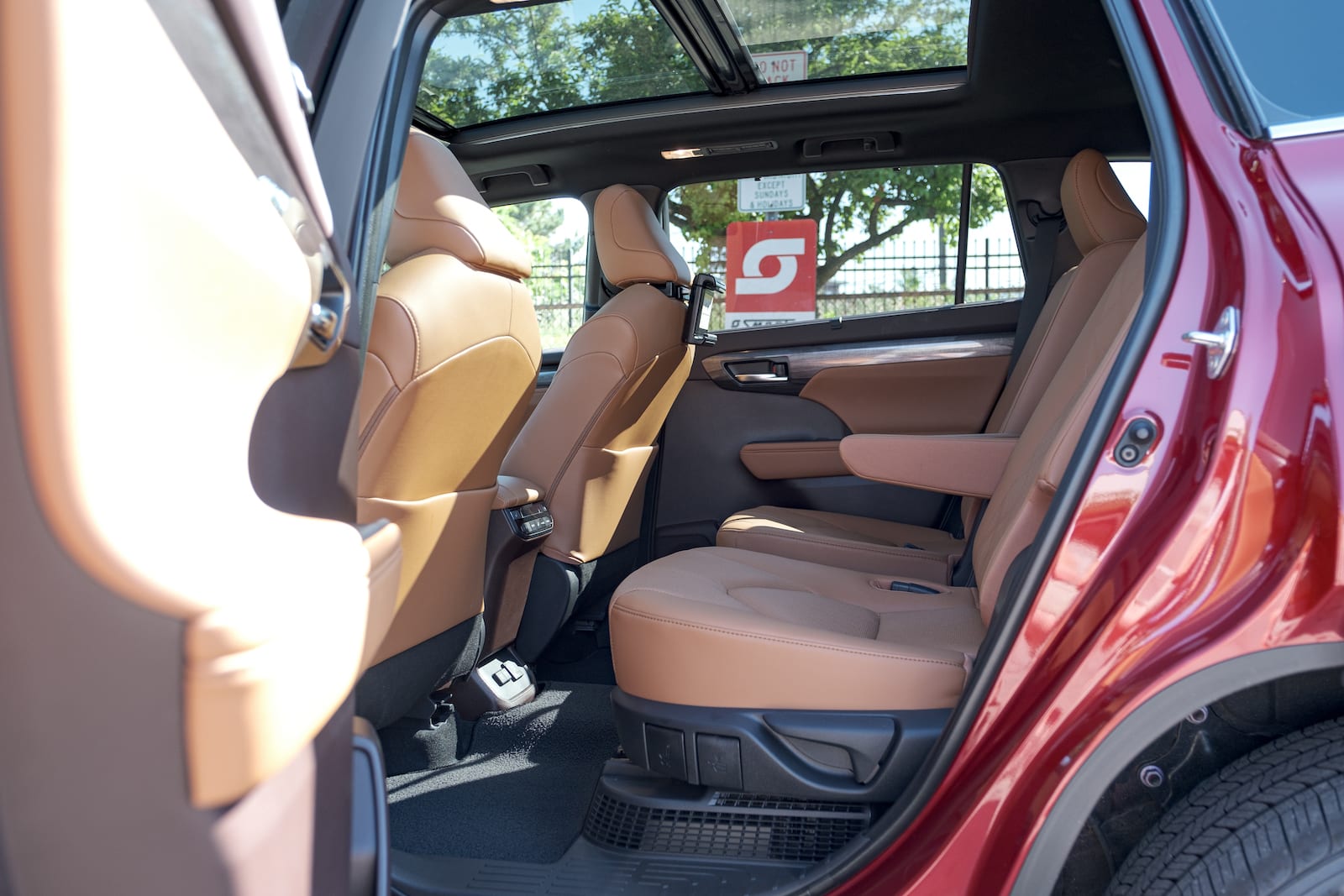 The third row is snug for me at 5’10”.  I can sit back there, but my knees are above my waist, I don’t think I’d want to spend more than twenty minutes to half an hour back there.  Children under five feet tall should be fine.

With all the seats folded flat there is a good amount of cargo room in the Highlander, save for the large hole created by the Captain’s chairs.  With the second row up cargo area is still quite good.  However, once the third-row seats are deployed there is very little space to be had. The depth is slightly more than a sideways paper grocery bag.  Actual numbers are 48.4 cubic feet with the third row folded, 16 cubic feet with them up.  You can haul a lot of gear, or a lot of people, but not both.  If you want that and you want a Toyota, you will have to step up to a Sequoia. 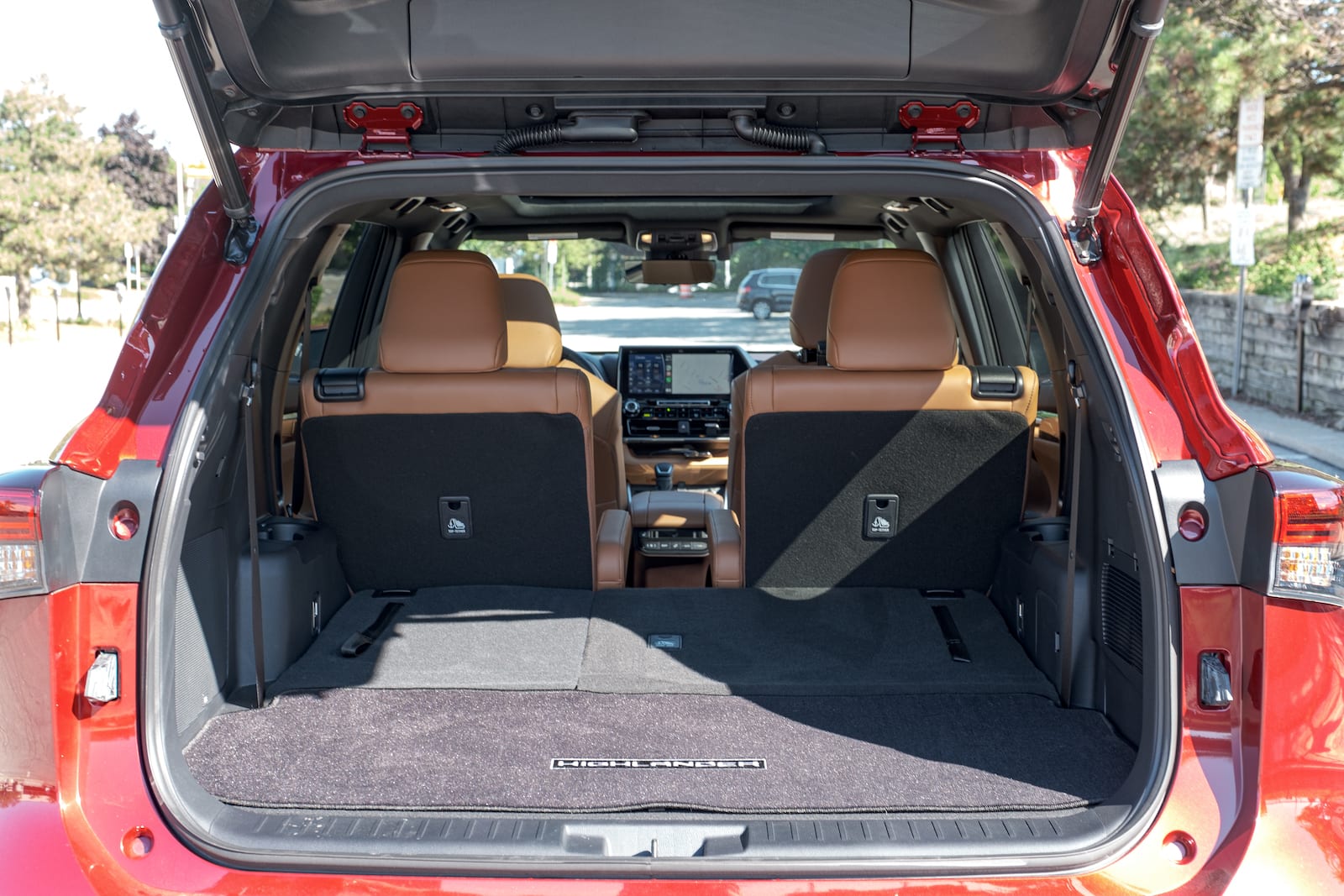 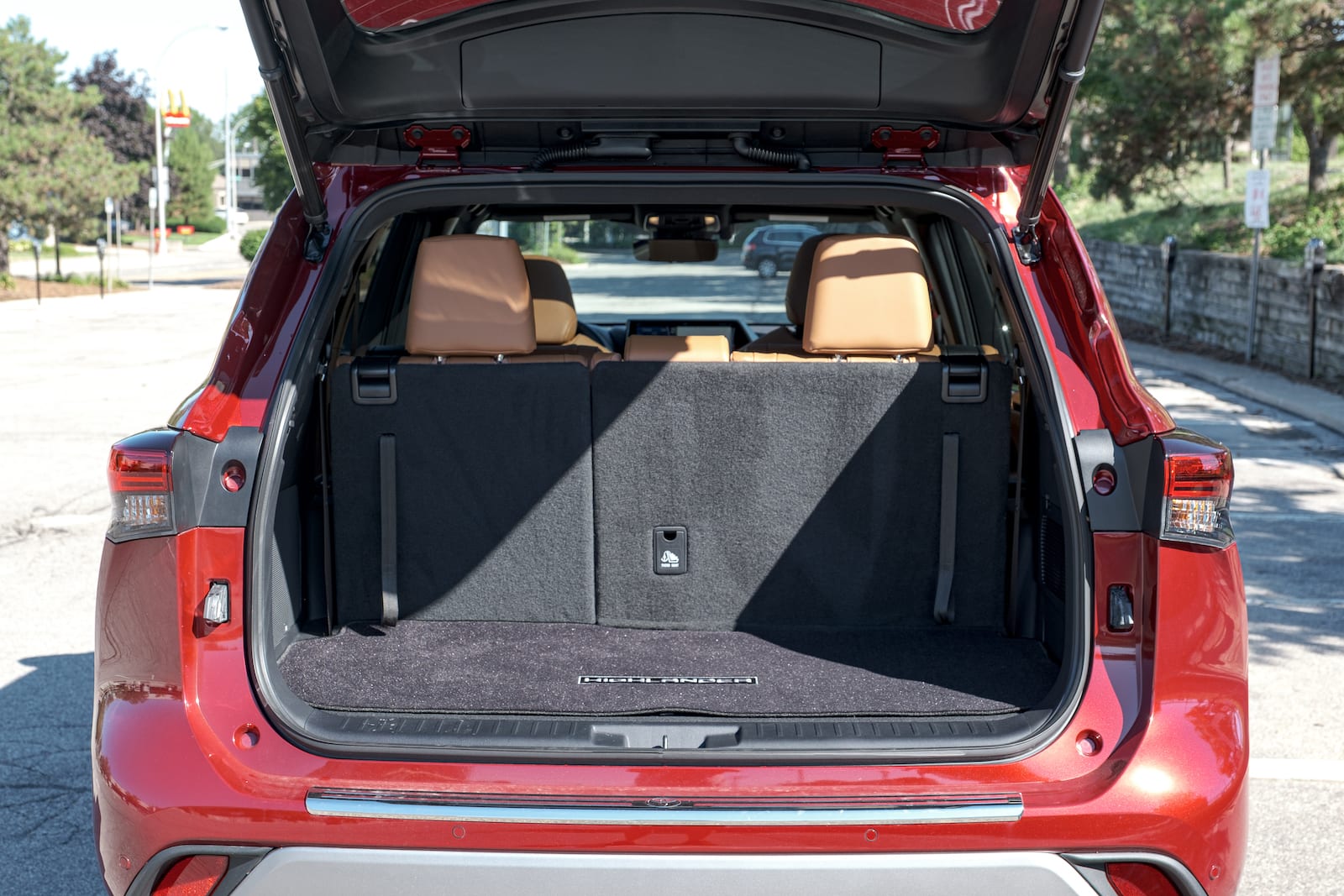 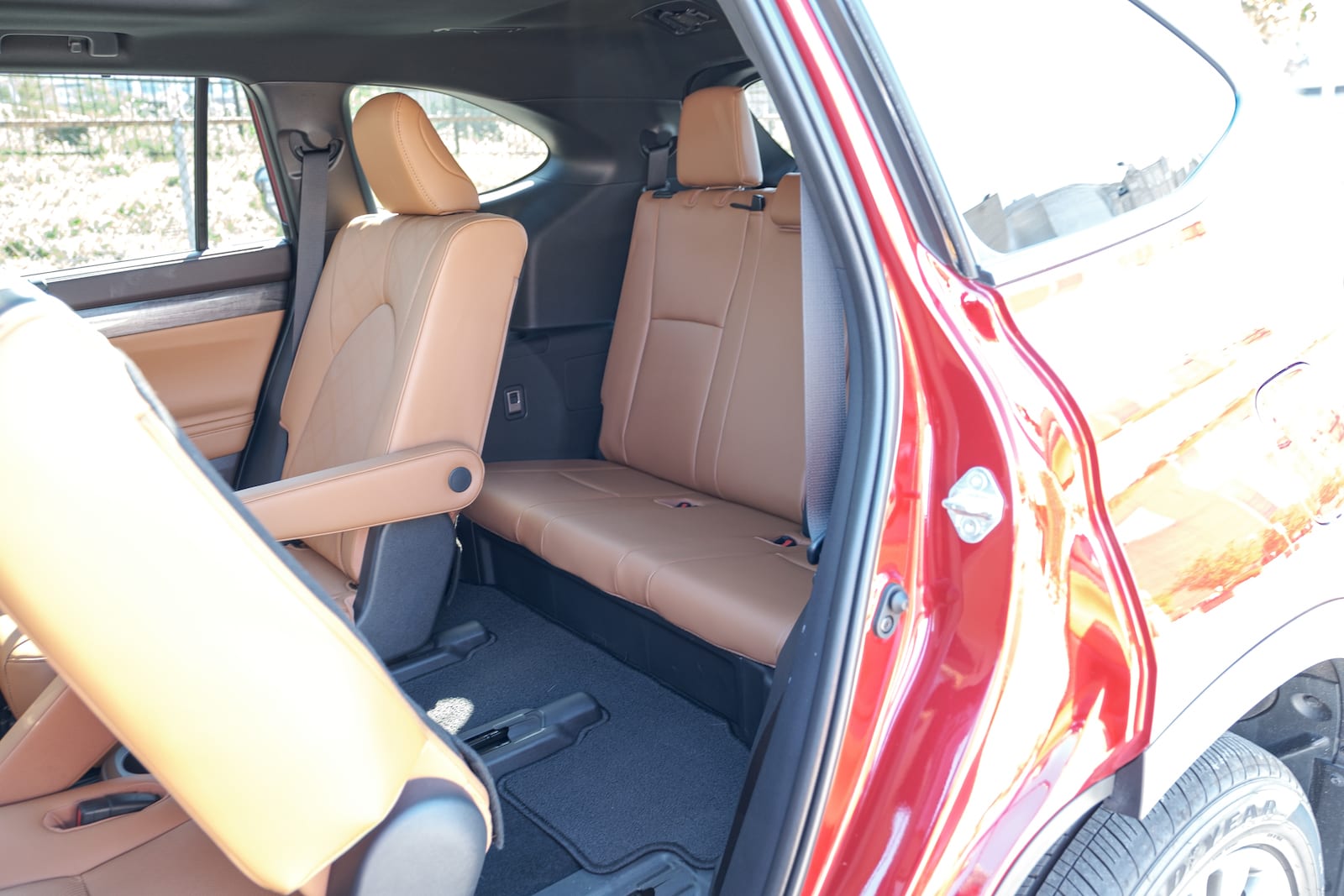 The centerpiece of this Highlander is the Hybrid system.  When it was announced this was the version I was most interested in.  The ability to have the size of the Highlander with the efficiency of a Camry was intriguing.

The sheer size and weight of the Highlander push this drivetrain combination to its natural limits.  The engine is a 2.5-liter four-cylinder producing 186 horsepower on its own but rated at 243 hp with the Hybrid system.  Torque is rated at 175 lb/ft. 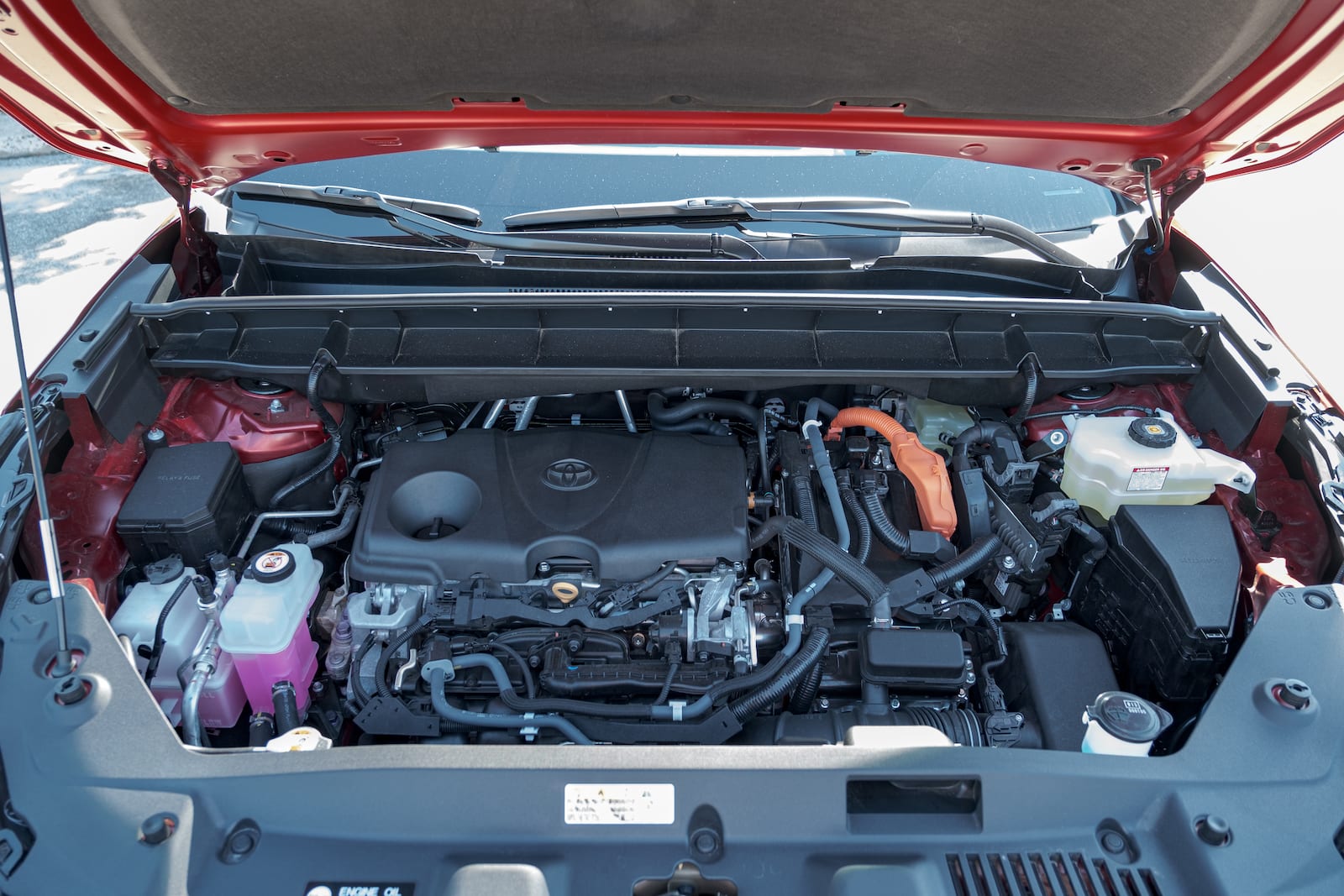 What surprised me the most about this engine was how course it sounded.  Maybe not General Motors four-cylinder coarse, but far more than you’d expect from Toyota.  Toyota list the curb weight of this AWD Hybrid Platinum model at 4,595 pounds.  Fill it with fuel and two people, you are pushing almost 5,000 pounds with this drivetrain.

And that brings me to my second point.  Acceleration with this Highlander borders on SLOW.  As in you need to plan moves when you pull out into traffic.  Once the Highlander is rolling it is not bad, but getting that mass moving with that little torque is a chore.

Once up to speed the Highlander is very quiet, notable because of the large glass sunroof.  The ride is comfortable.  It is the kind of ride you’d want in a vehicle like this.  It feels controlled and confident.

The upside of the Hybrid powertrain is the fuel economy.  The EPA rates it at 35 city, 34 highway, and 34 combined.  I saw 32 mpg across the board in my week with it and a little over 300 miles of mixed driving.  The Hybrid system is seamless and the pure EV mode is much improved over the last generation.

For comparison, the Subaru Ascent I had following this struggled to pull 24 mpg on the highway and was about 18 mpg in the city.

The question you have to ask yourself is are you willing to trade fuel economy of a significant amount of acceleration and drivetrain NVH.

So what does it all add up to?

In my notes, I have written down that the Highlander is firmly in second place in the category.  After my week with the Ascent in Touring spec, I would call it a coin toss between the Ascent and Highlander, hybrid system aside.

If you take fuel economy into account then yes the Highlander is better than the Subaru.  However, the Subaru was more enjoyable to drive. It had not only the power to get out of its own way, but even handicapped with a CVT, the overall drivetrain felt much smoother. 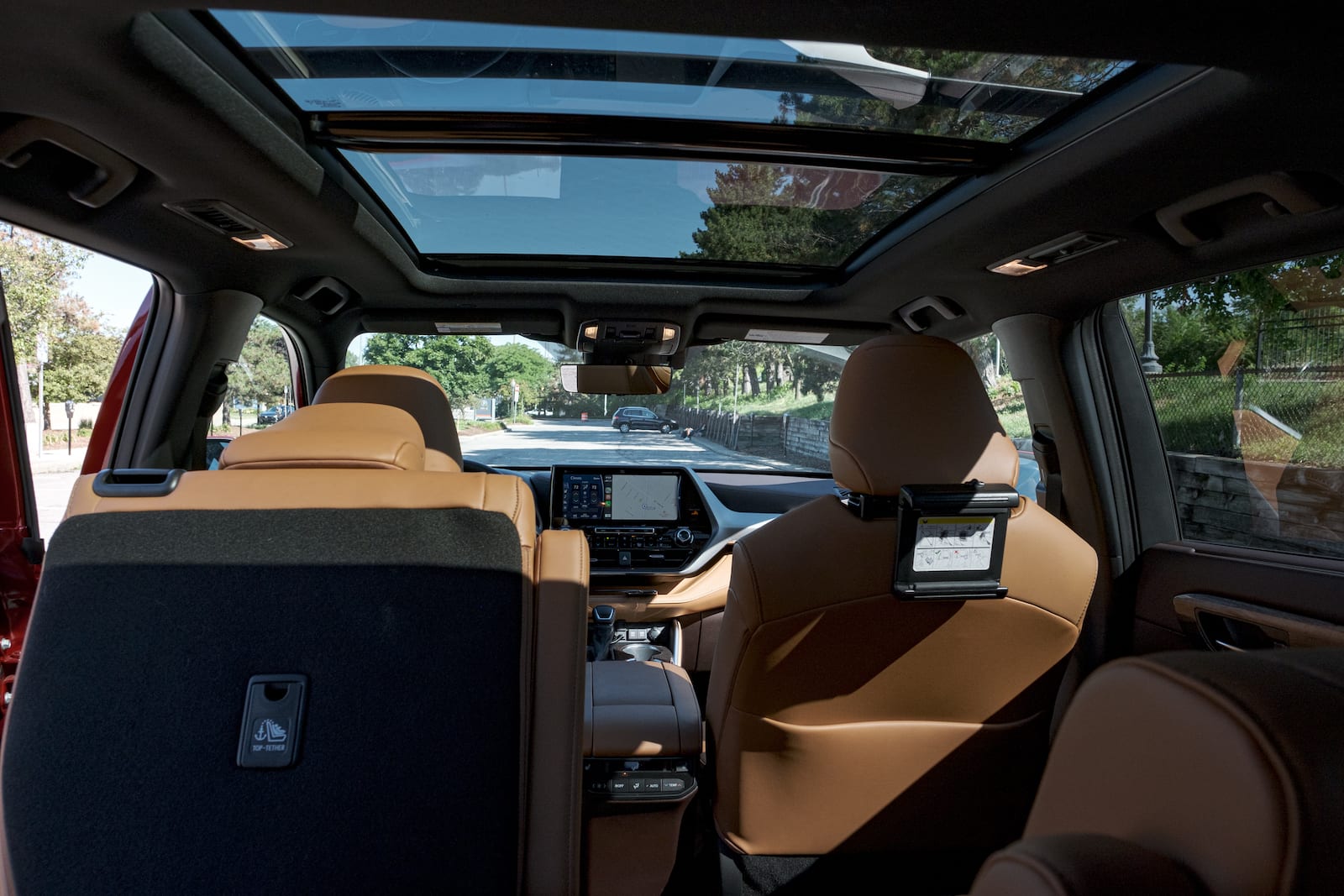 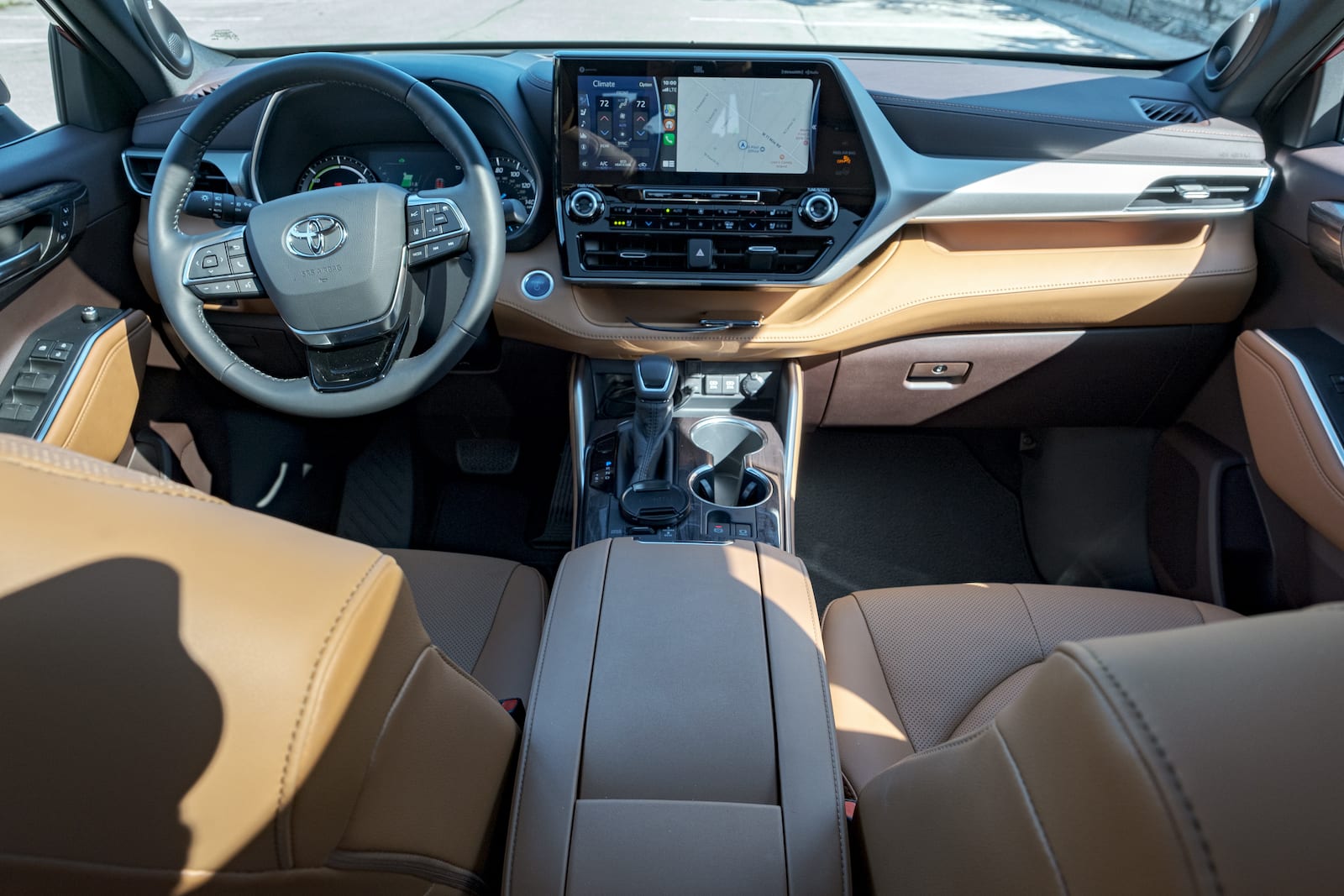 The Telluride’s interior materials are better, the design both inside and out is more timeless.  It also has a look that makes you think it’s more expensive than it is.

Where Kia raised the bar for the entire category, Toyota made a better Toyota.  That is not a bad thing, but it is not enough to retake the crown as the best three-row crossover in the market. 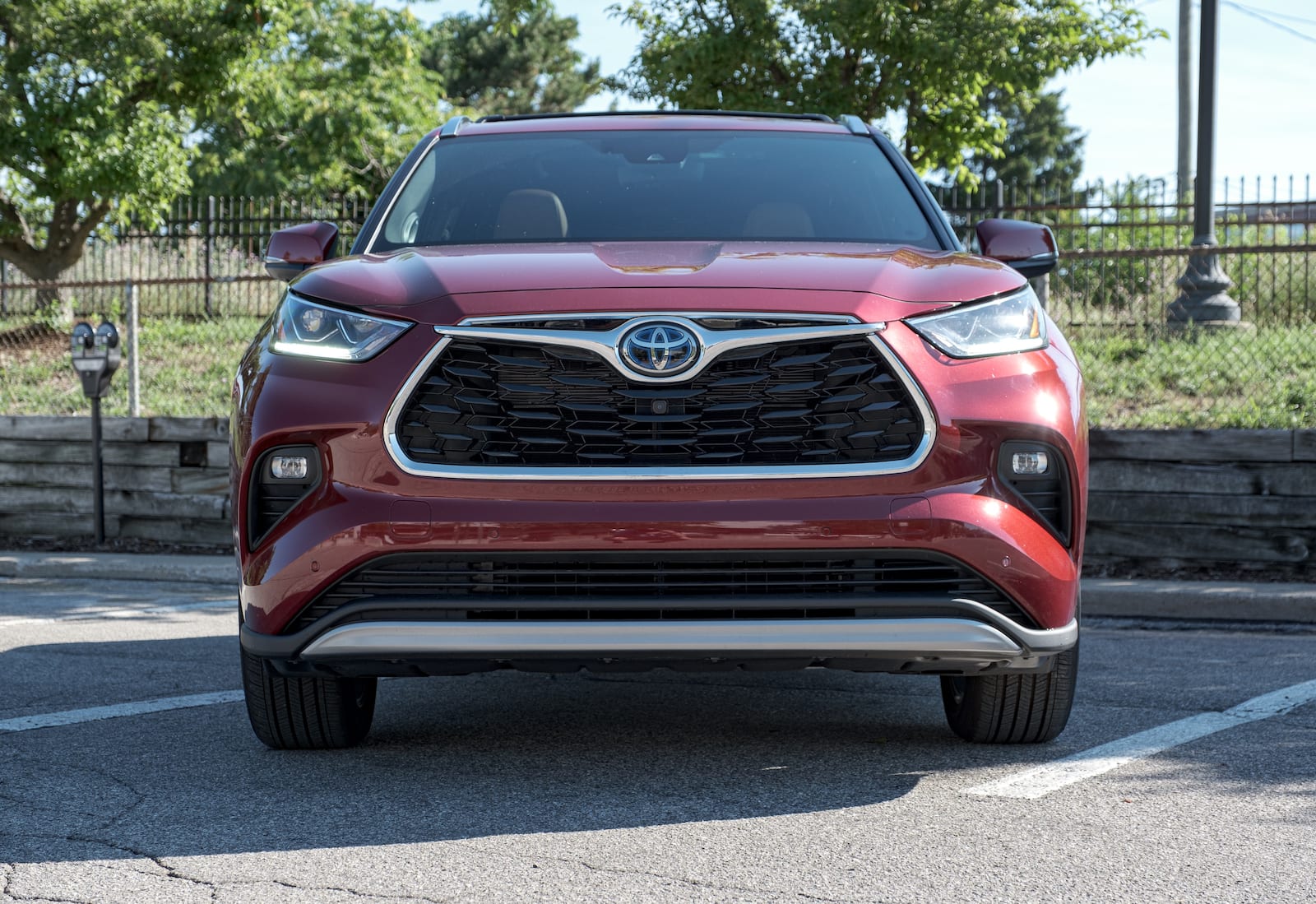