Six-figure vehicles are an interesting segment of the automotive world. On a daily basis, unless you live in a fairly affluent area, you won’t see that many on the road. Well, unless you live in Miami, whereas renowned poet William Smith said “Hundred-thousand dollar cars, e’ybody got em”. I would say that even around Washington DC it’s fairly rare, and six of the ten richest counties in the country are nearby. So, the average person might start to, even in a relative sense, believe that a $100,000 car is likely pretty special. It is with that in mind that I took this $103,224 Lexus LX 570 out for a spin to see if it feels special. 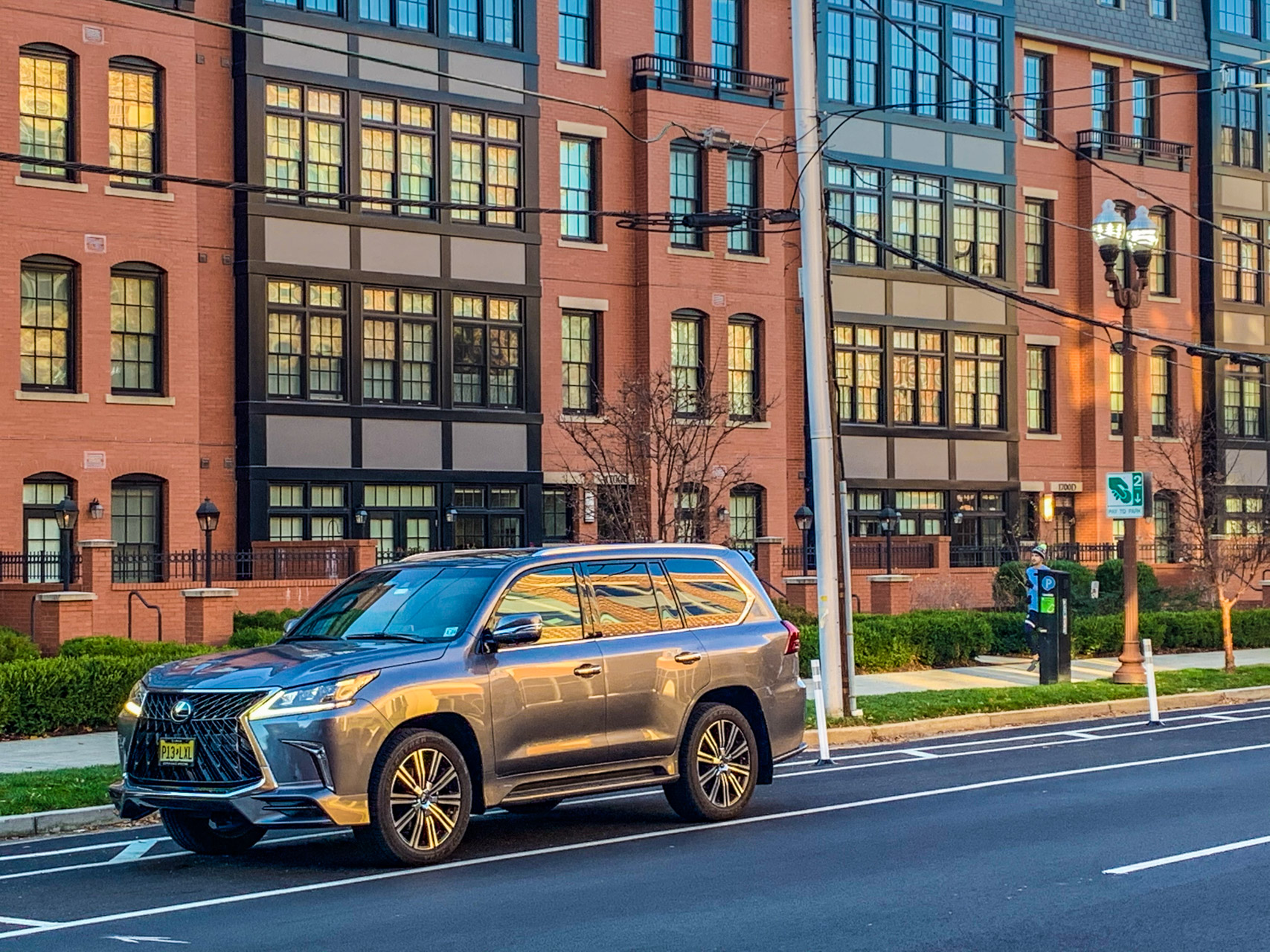 The third-generation LX (J200) has been around since the 2008 model year. Thirteen years, that’s about half of the LX’s total time in existence! The sticker price of this tester divided by 13 means that’s $7,940.31 for each year it’s existed, which is an incredibly meaningless stat that I just made you read. Heck, even the “facelift” for the 3rd generation has been around since 2015, which is pretty wild considering how short most vehicle generations last these days. Most readers already know, but the LX is heavily based on the Toyota Land Cruiser, and development on this generation kicked off way back in 2002. All that to say, the LX is aging. It’s almost old enough to drive itself. 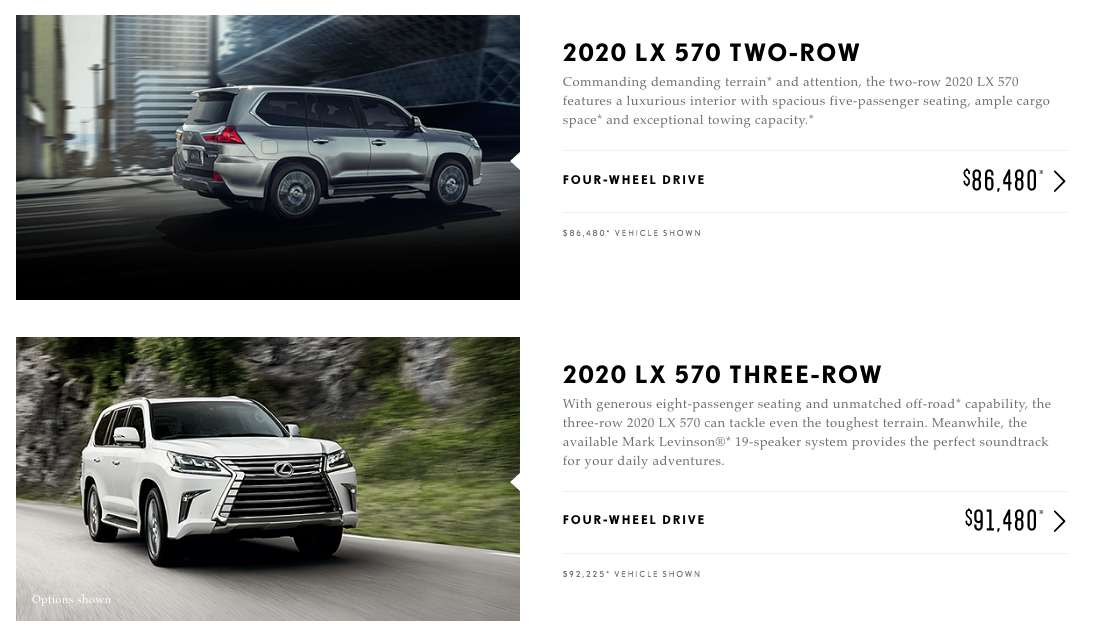 Anyway, on to the 2020 LX. As you can see above, the “base” two-row starts at a healthy $86,480, while you’ll pay another $5,000 for the third row. Our tester came with three rows, so that’s where we’ll take you on this journey. Building this online was easy, just select…everything. 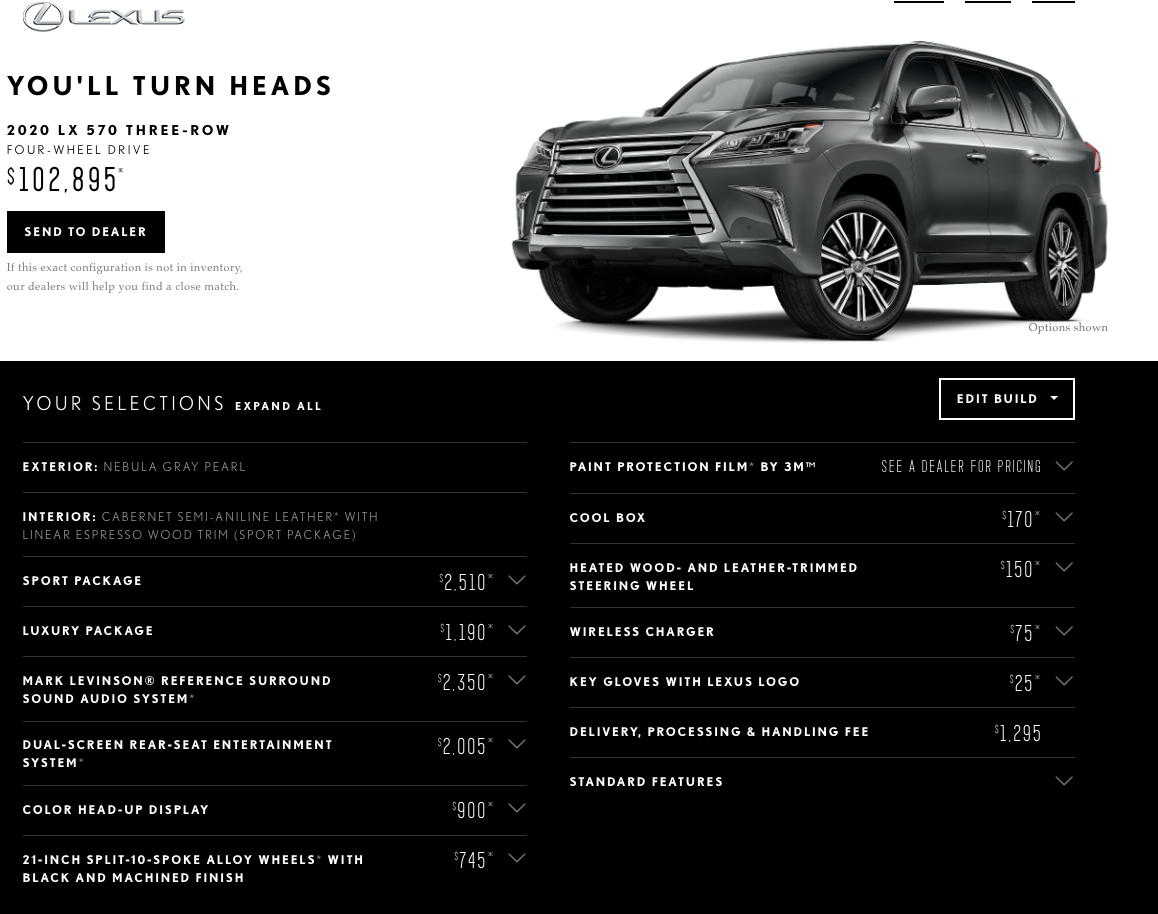 That’s a pretty substantial list of stuff, let’s see how it does in our barrage of highly rigorous tests. 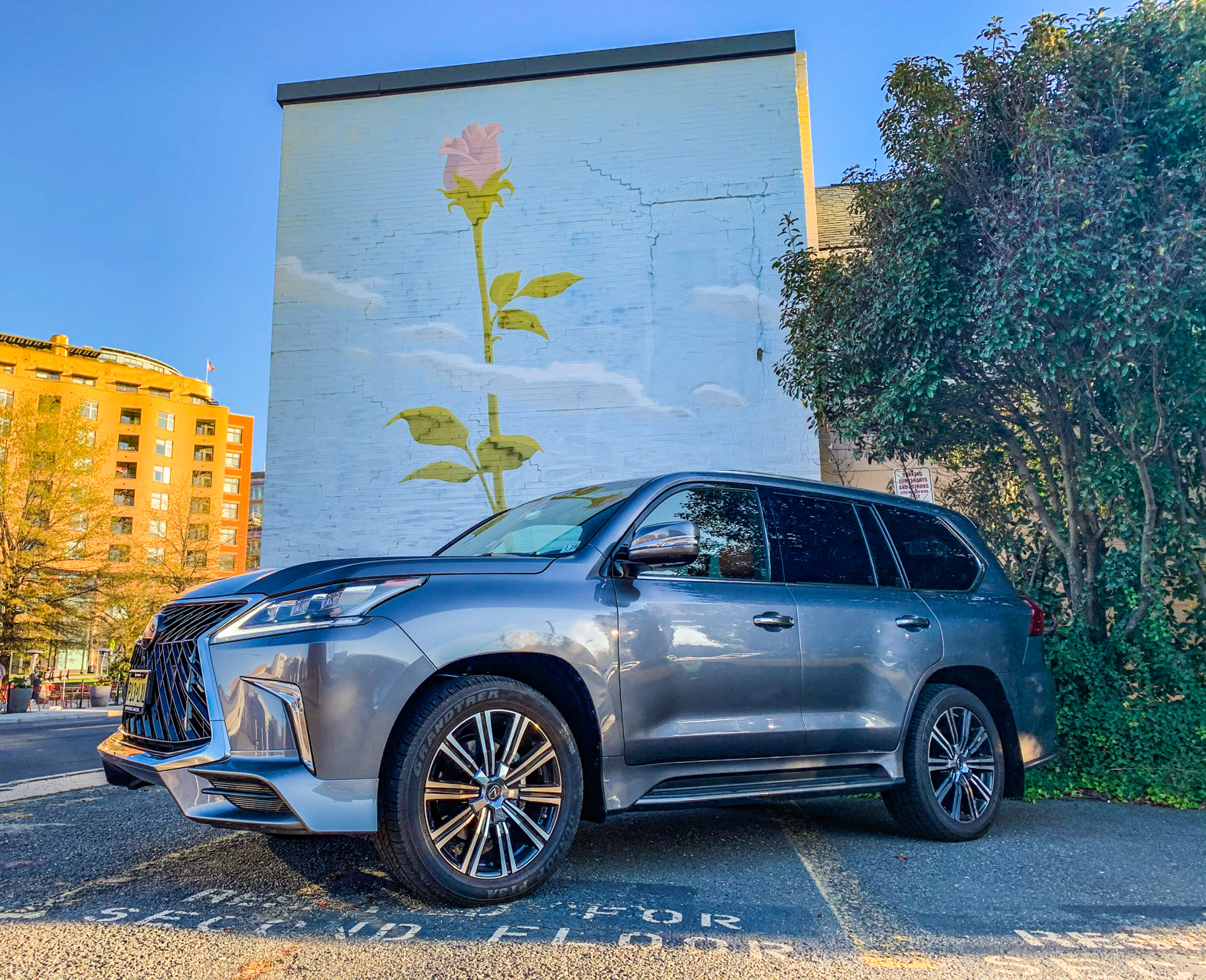 Test One – Helping the Less Fortunate

On a chilly fall morning, we awoke to a realization. We agreed to help pick up food for our son’s cub scout pack today! “Scouting for food” is a program where they drop off leaflets and a week or two later return to collect food donations. Mercifully it didn’t start that early, but I wearily arose and decided that such a task was an interesting test of a $103,224 vehicle. It not only tested the LX 570’s cargo capacity, but it also tested the all-important “driving slowly with the hatch open while 1st graders pile food into your car” factor. Super important in any SUV. 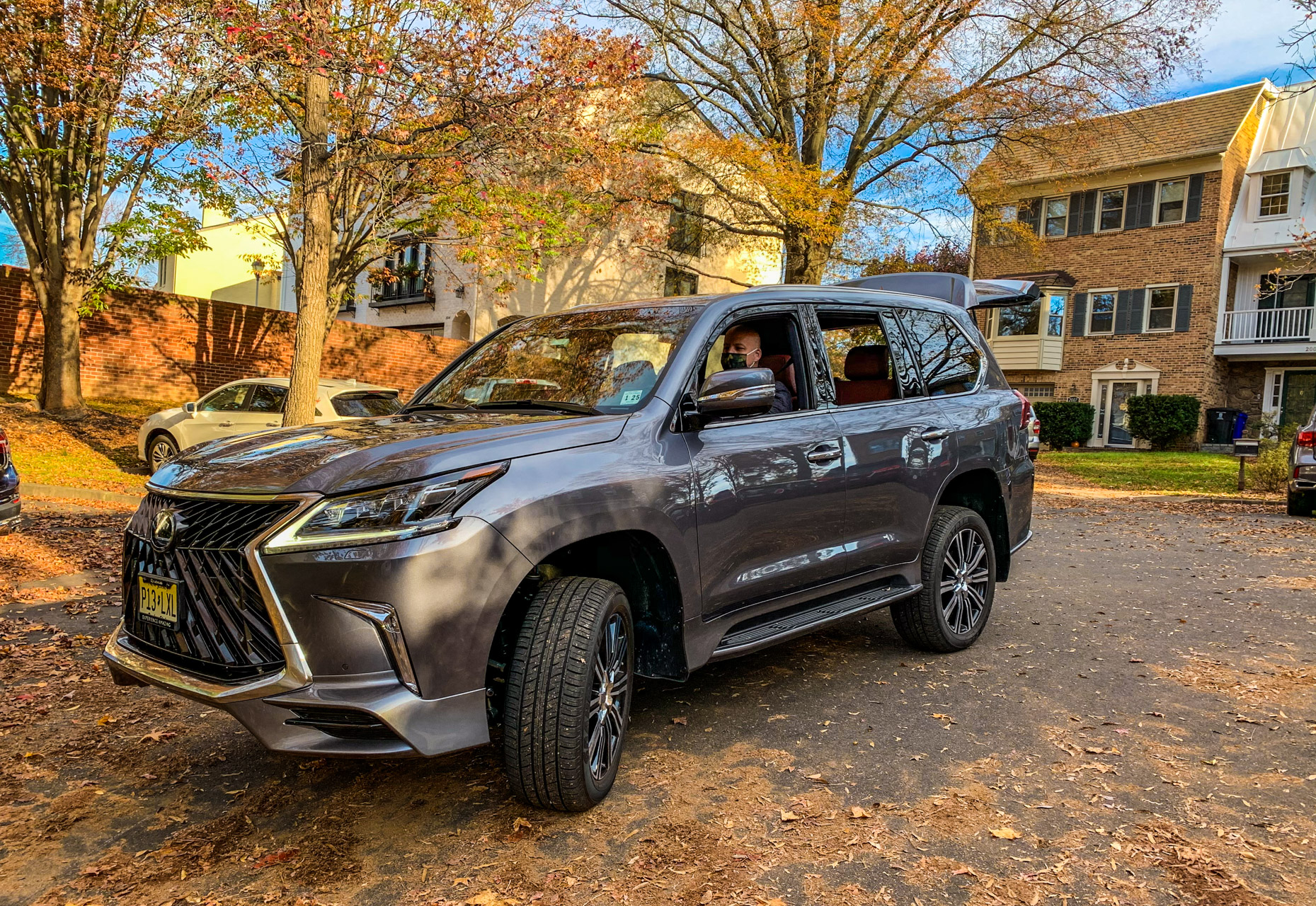 The LX did great, the warning system decided to occasionally remind me that the rear hatch was open, which was fine. The split tailgate was fantastic though, it allowed us to go from house-to-house and keep all of the food safe while on the move. 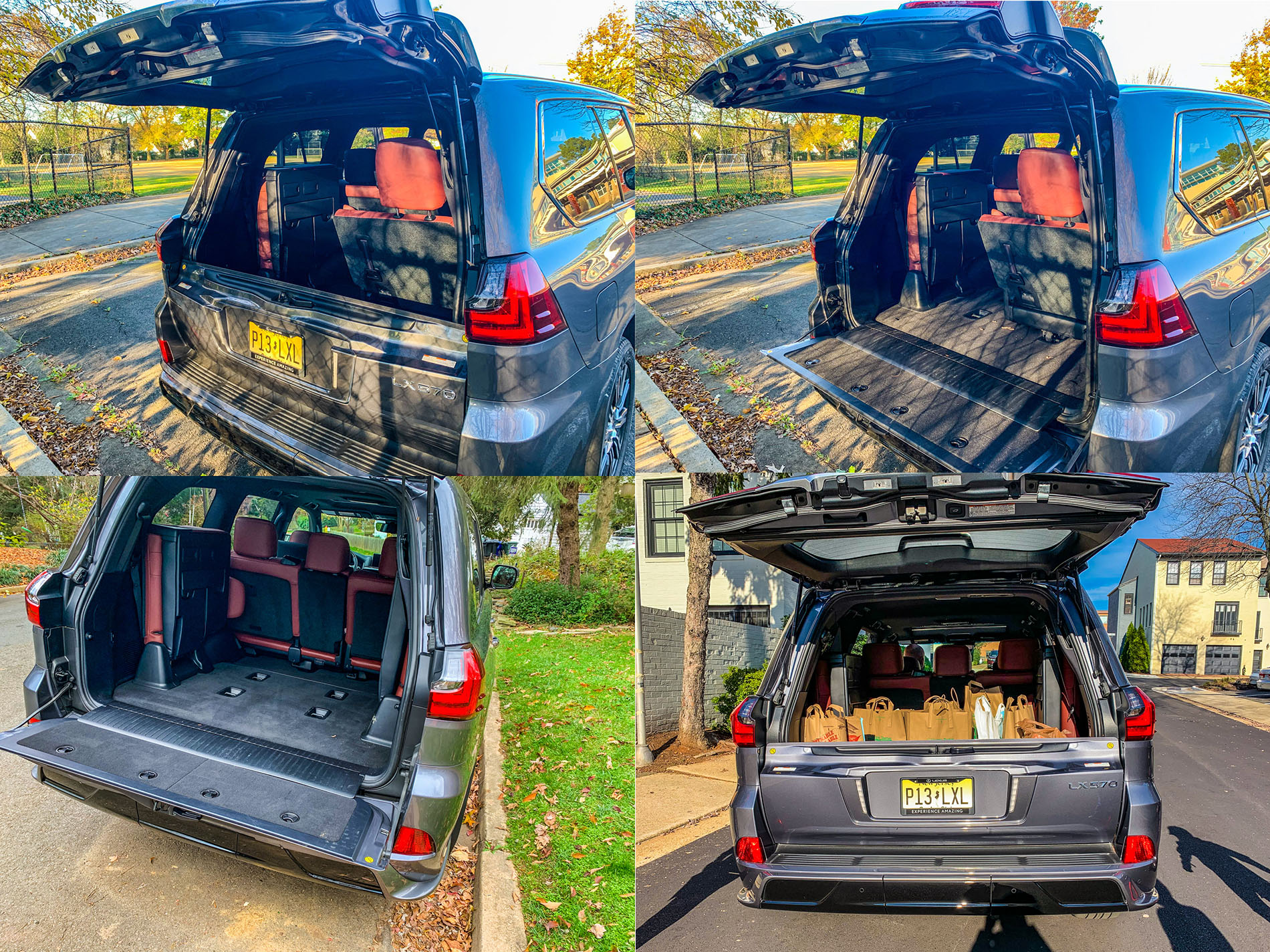 The heated seats and HVAC system also kept me warm while driving with the windows down. Plus, I didn’t have to walk, my favorite kind of charity. In the end, we filled the back of the LX with a ton of food for the less fortunate. 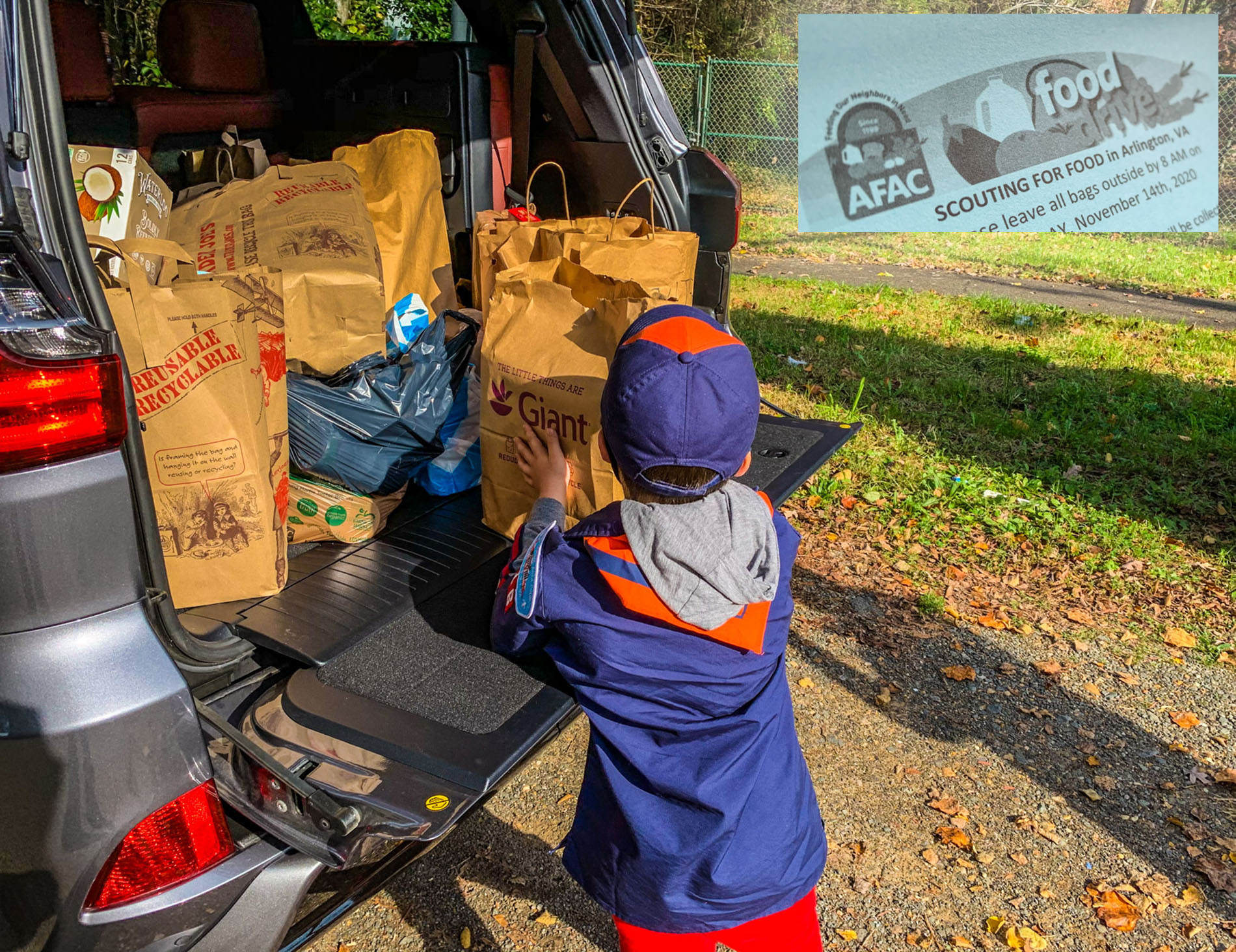 Up next, the day-to-day grind of taking kids to sporting events and shopping for my own new ride. Each tested the LX in different ways. Some very unfortunate ways. 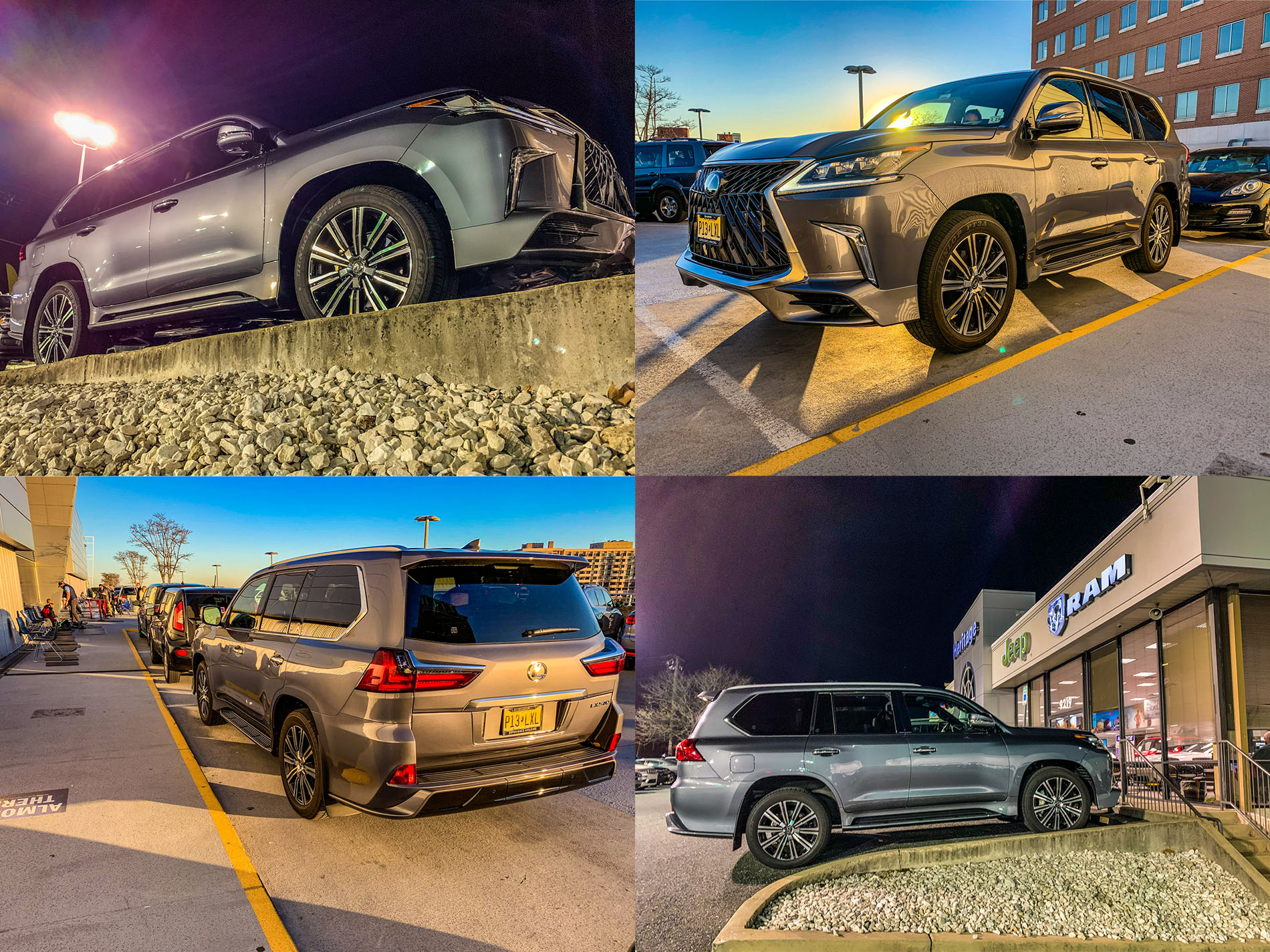 Up first, car shopping (top left, bottom right in the image above). En route to the Jeep dealer, which was about an hour and fifteen minutes away, we heard an “I don’t feel so good” from the backseat, followed immediately by that “gulp” sound that parents dread. With nothing to protect the six-figure LX’s interior, he let loose with the afternoon’s sustenance. We pulled off the highway onto the shoulder, likely causing us to be marked by a Wazer as a “vehicle on the shoulder ahead” and realized that we had absolutely nothing to clean it up. Being closer to the dealership than home, we pressed on, texting the salesperson that we were coming in hot and needed some cleaning supplies.

The LX’s leather interior was pretty easy to clean up, a testament to…something, probably. The only issue while cleaning was the extra vent below the 2nd row, great for blowing additional air into the cabin, awful to clean vomit out of. But, the next morning there were no foul smells, so it was mission accomplished. Oh and we bought a(nother) new car, more on that soon.

Next up was dropping our little guy off at hockey skating lessons. Because of COVID, parents aren’t allowed in, so this test factored in two key elements. 1) How good is it at carrying a kid and his hockey crap around, and B) How comfortable is it to sit in for the better part of an hour in a parking lot? Unsurprisingly the big, comfortable, SUV did great on both “tests”. It was super easy to get his gear on inside the LX, and the comfortable seats were great to lounge in while we waited. Plus, I had a cooler for my drinks. 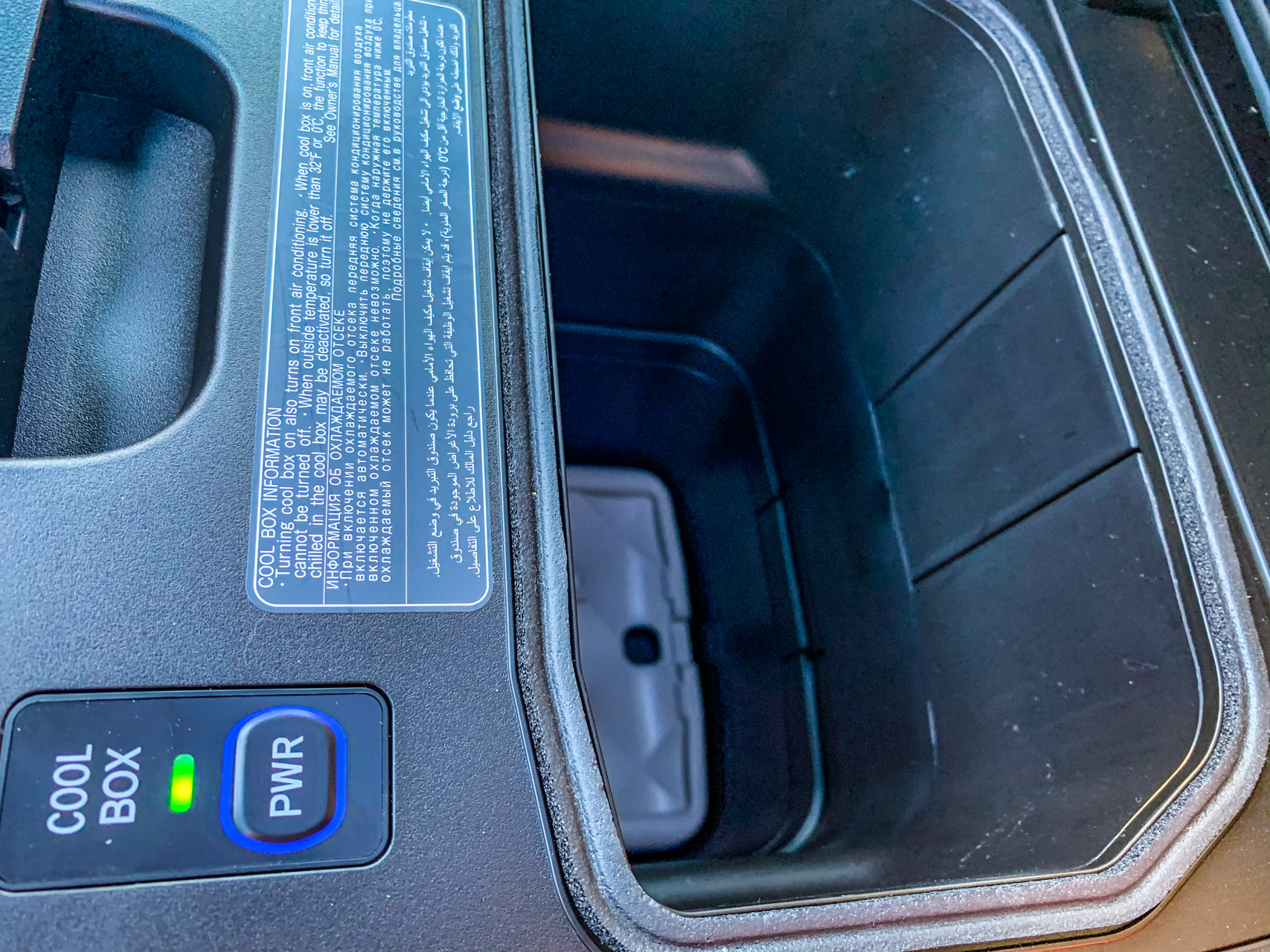 lol, there’s no valet, we’re in the middle of a fucking pandemic! This is what it might look like. Glorious. 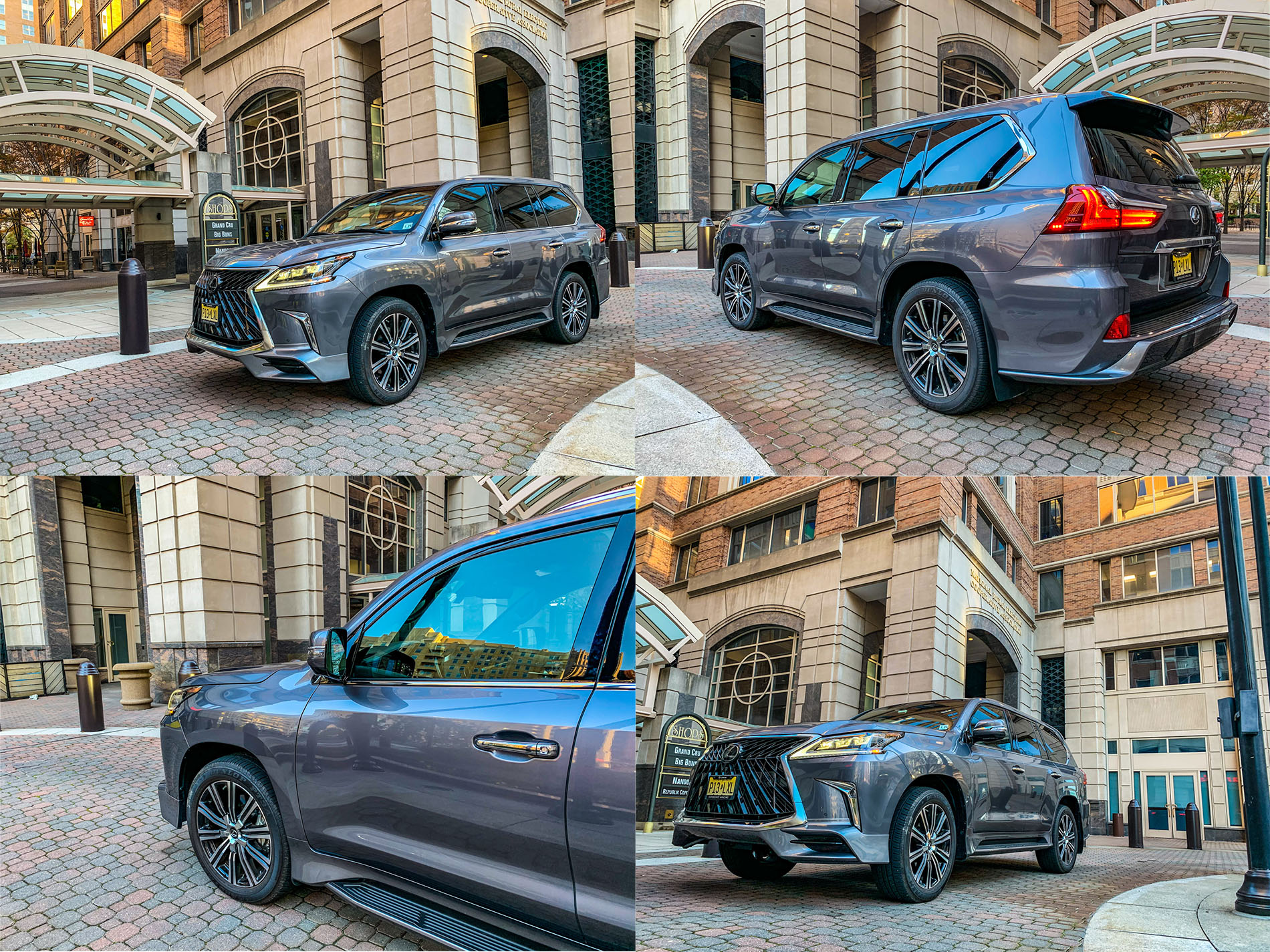 Another COVID-related restriction, which has been front-and-center for me lately, is time with my older kids. Besides the six-year-old cub scout, there exists a sixteen and a thirteen-year-olds that call me “dad” as well. Unfortunately, their mom isn’t as concerned about the pandemic as I am, so their time at her house is less restricted. That means I have been seeing them socially-distanced since the fall started. Not easy to say the least, but I make the most of it. 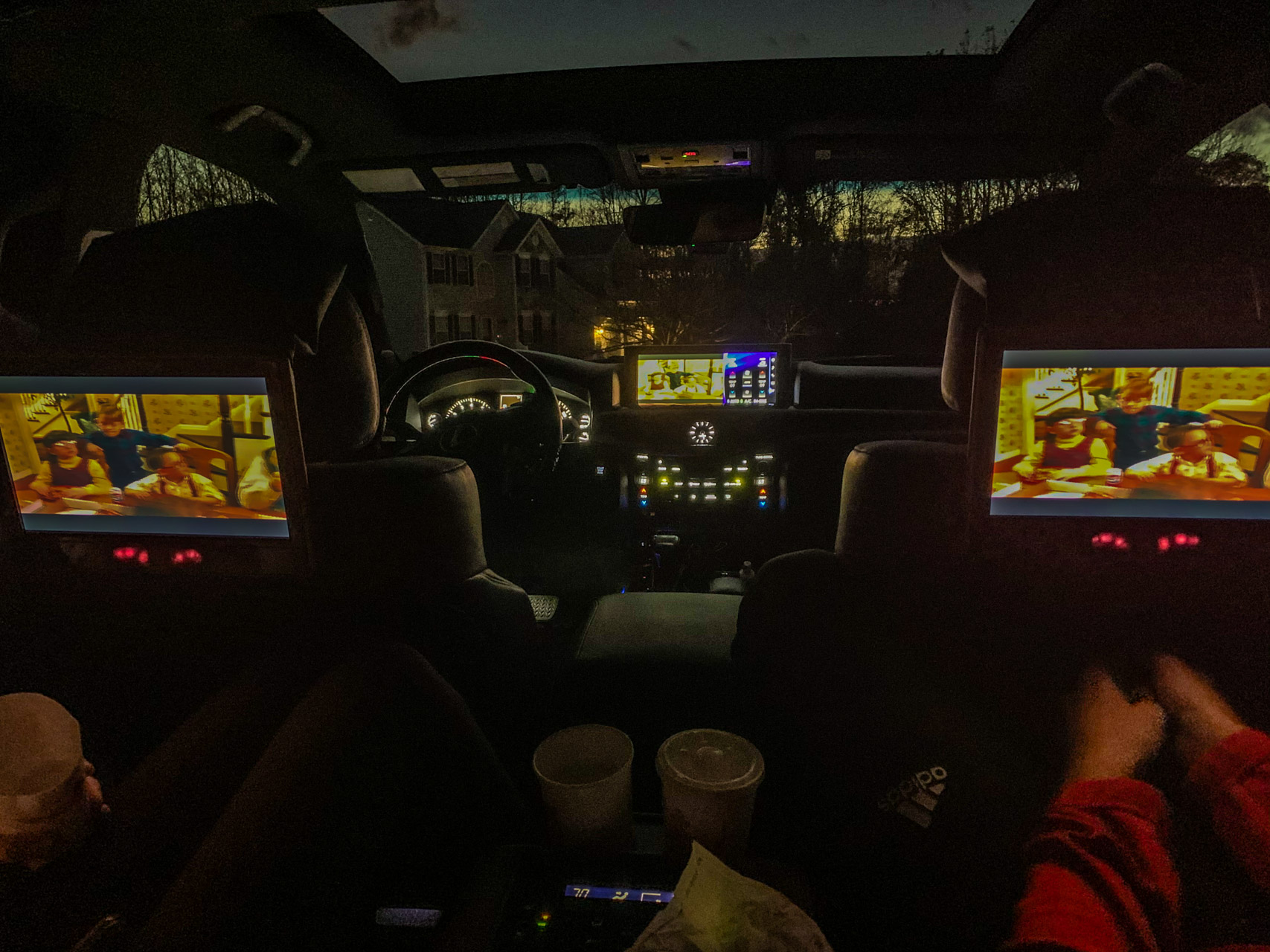 It’s no secret around my house that my all-time favorite Christmas movie is Home Alone. It’s special any time I get to watch it, which is usually a few times each year.  Actually, in this case, I tried to show the movie Elf on BluRay, but my $100,000 loaner would only play DVDs. So, since Home Alone is one of the only DVDs I still own, I would bring it along for a socially distanced movie night with teens. That evening, I dropped by for dinner and a movie and the large interior of the LX provided just the right amount of distance between us. They took the 2nd row, I saw in the far back, leaving the $5,000 rear seats folded up to the side to give us some more separation. I also left the rear hatch open and had the windows down. It was chilly, but the LX kept everyone pretty warm.

Oddly enough, about an hour it, even on gas power, it shut itself off. I had to run around the front and restart it, which was odd, but not a huge deal. It passed the Christmas Spirit test, even though I remain a bit deficient in that category this year.

These strange days become stranger by the day. Just yesterday Virginia announced a new series of COVID restrictions. I’m fortunate to get to drive these cars on a (mostly) weekly basis, it’s a great distraction from what’s going on around us. In the end, I really enjoyed the time in the LX. Despite its age, it does just about everything well, and actually did feel special. I even had someone at a gas station say “that’s really nice”. And that’s the feeling that the LX gives, even though it’s a little truck-like compared to some of the competition, it is easy to drive, has a ton of amenities. Does it feel like it’s over $100,000? Most certainly.

Toyota doesn’t really care anyway, they sell around 4,000-5,000 LX’s per year, which is just a bit more than the number of Land Cruisers they sell. The point being, it’s not a high volume vehicle, and the sales numbers are incredibly stable year-to-year, which makes me believe they know exactly what they are investing (or not investing) in. At the end of my time with the LX, I was sad to see it go. Would I spend $100,000 of my own monies on it, that depends on my level of affluence I suppose. It’s going to be a raging bargain on the used market, that’s for sure! 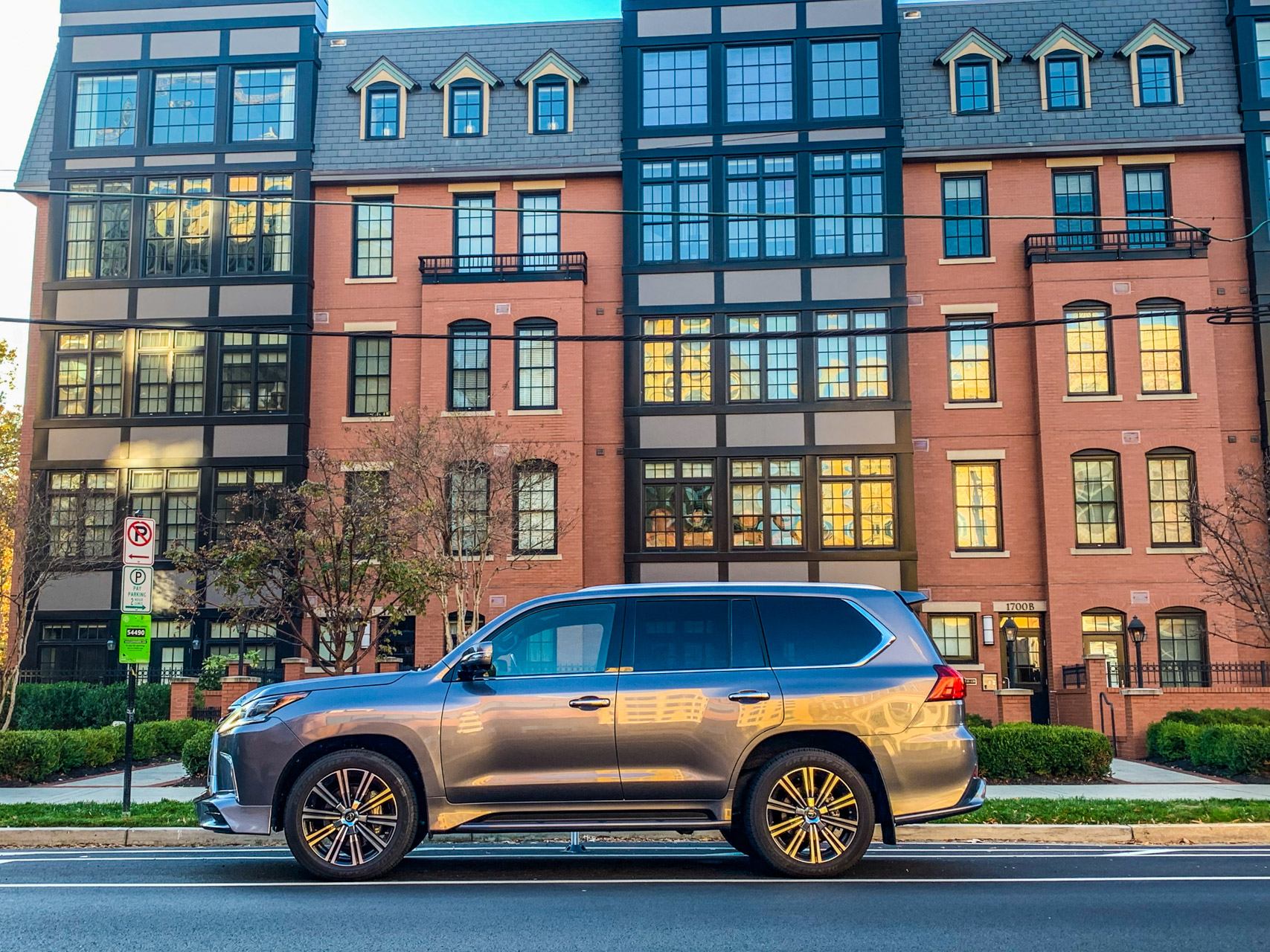 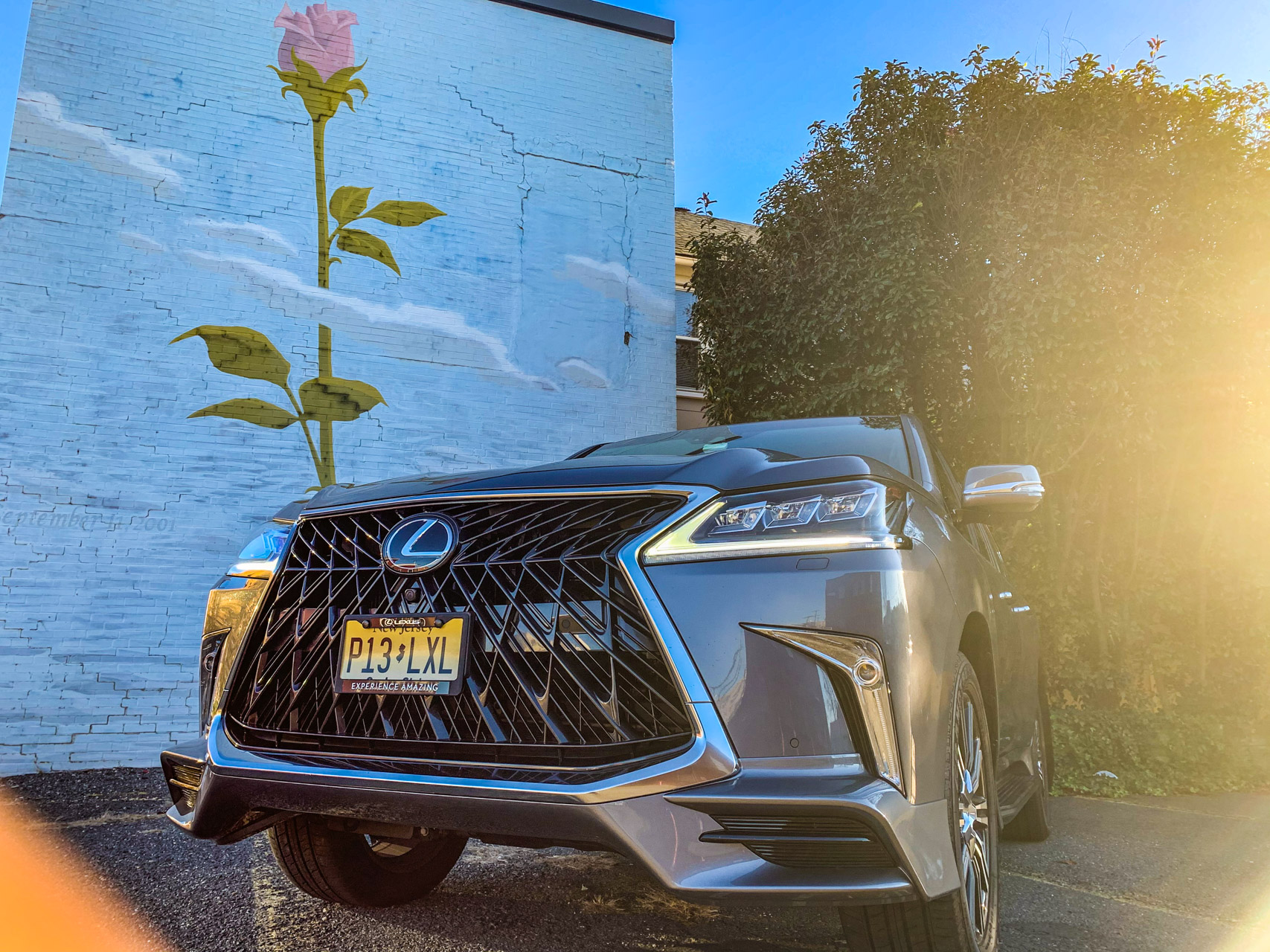 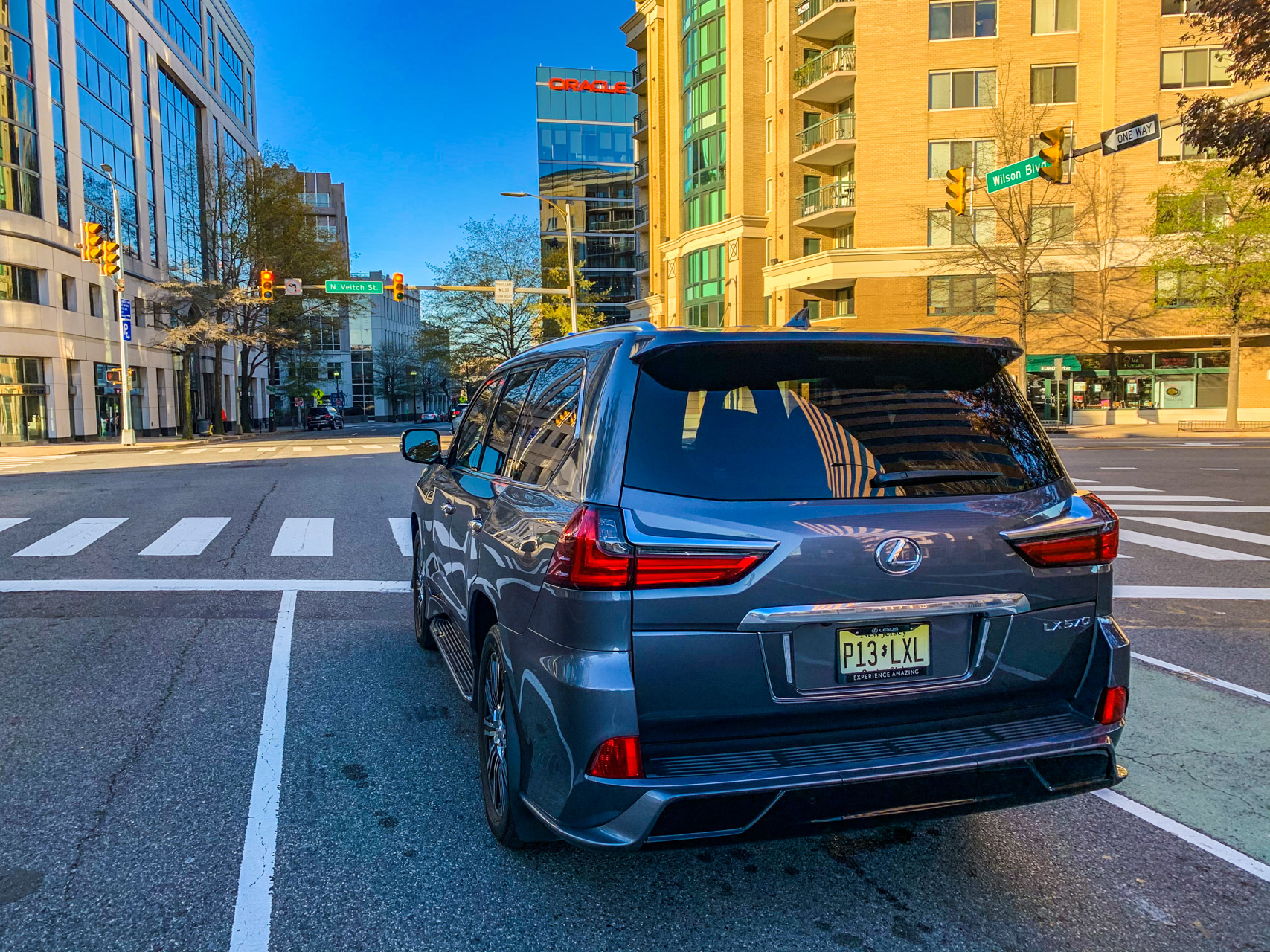 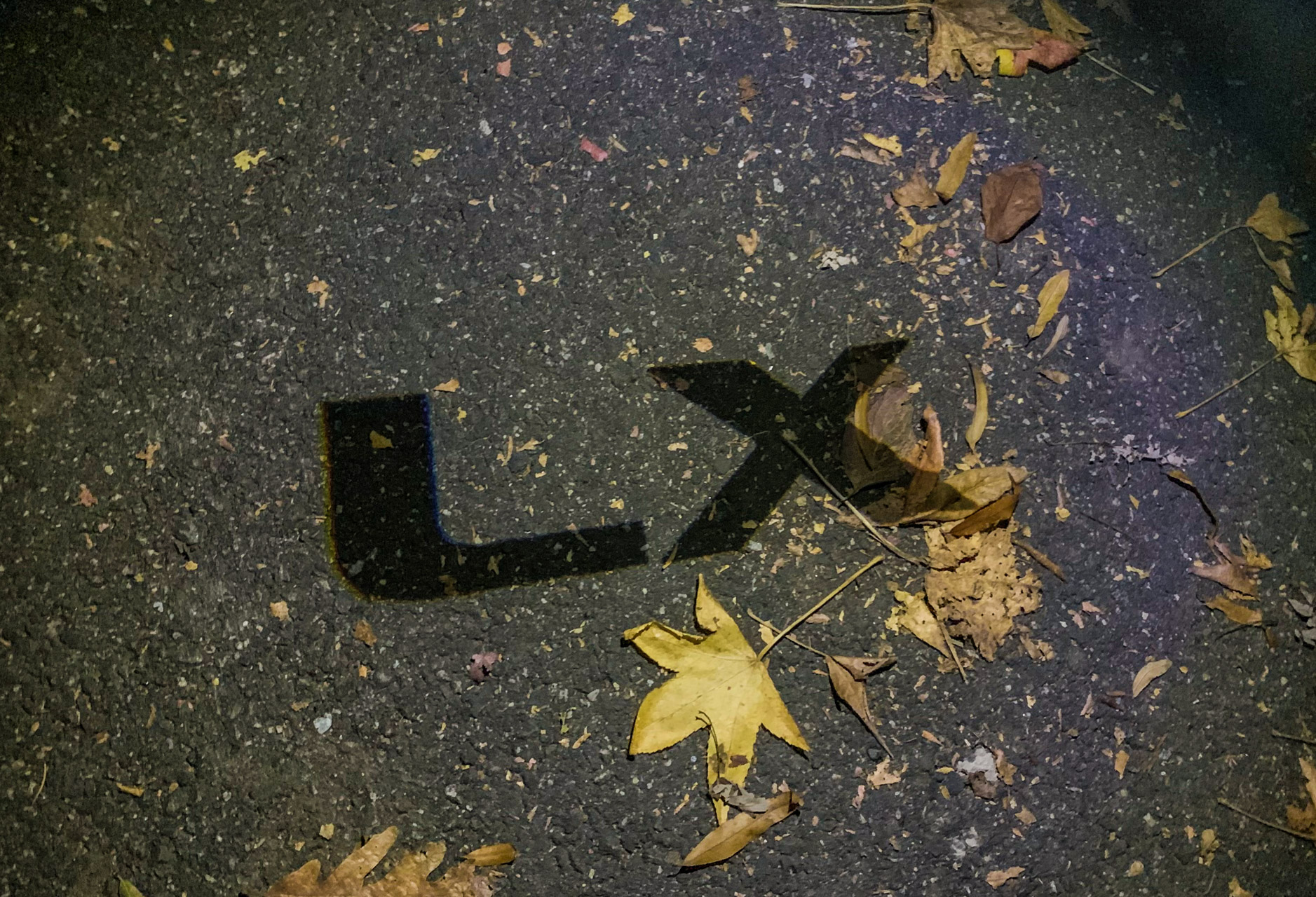 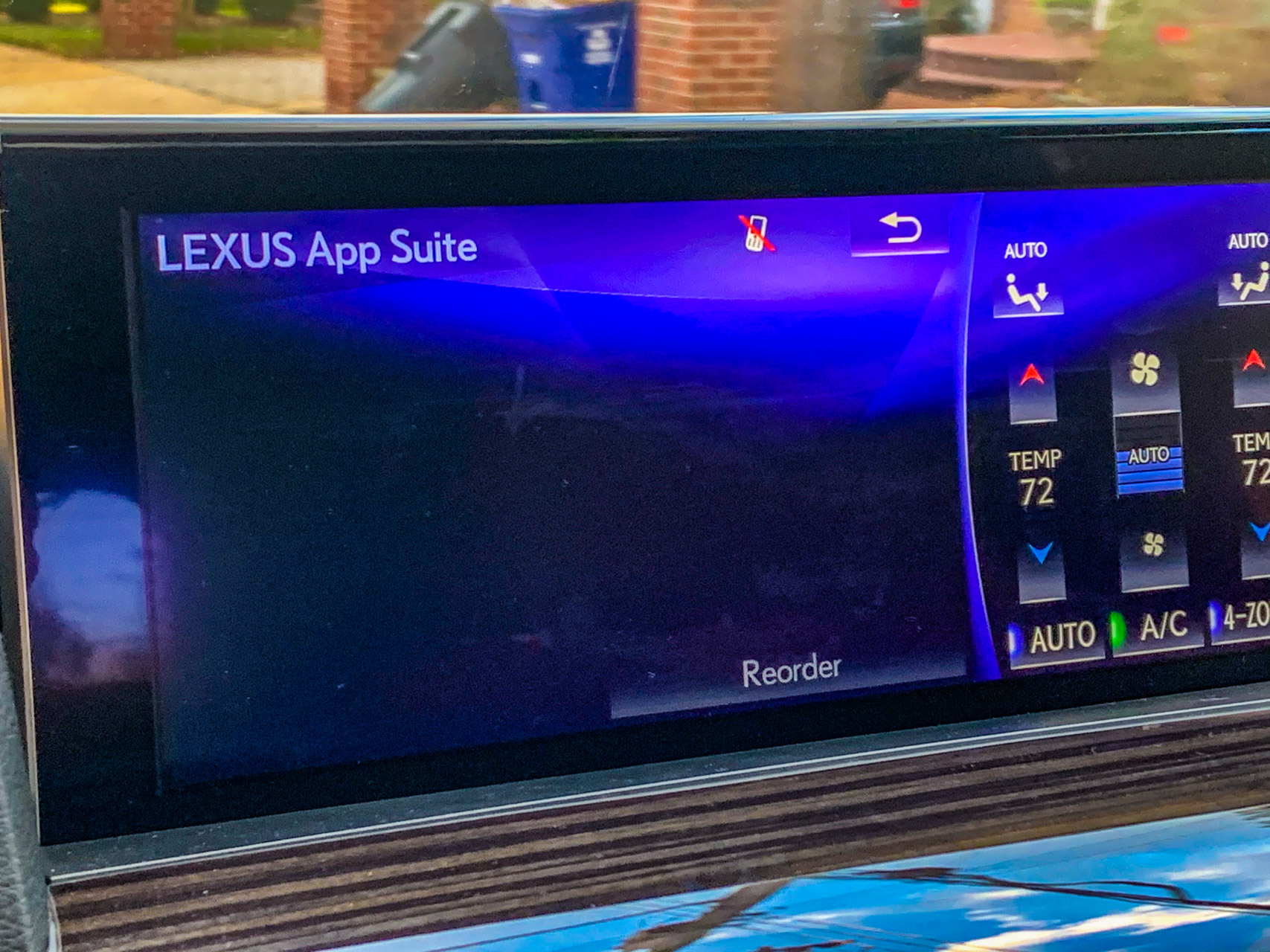 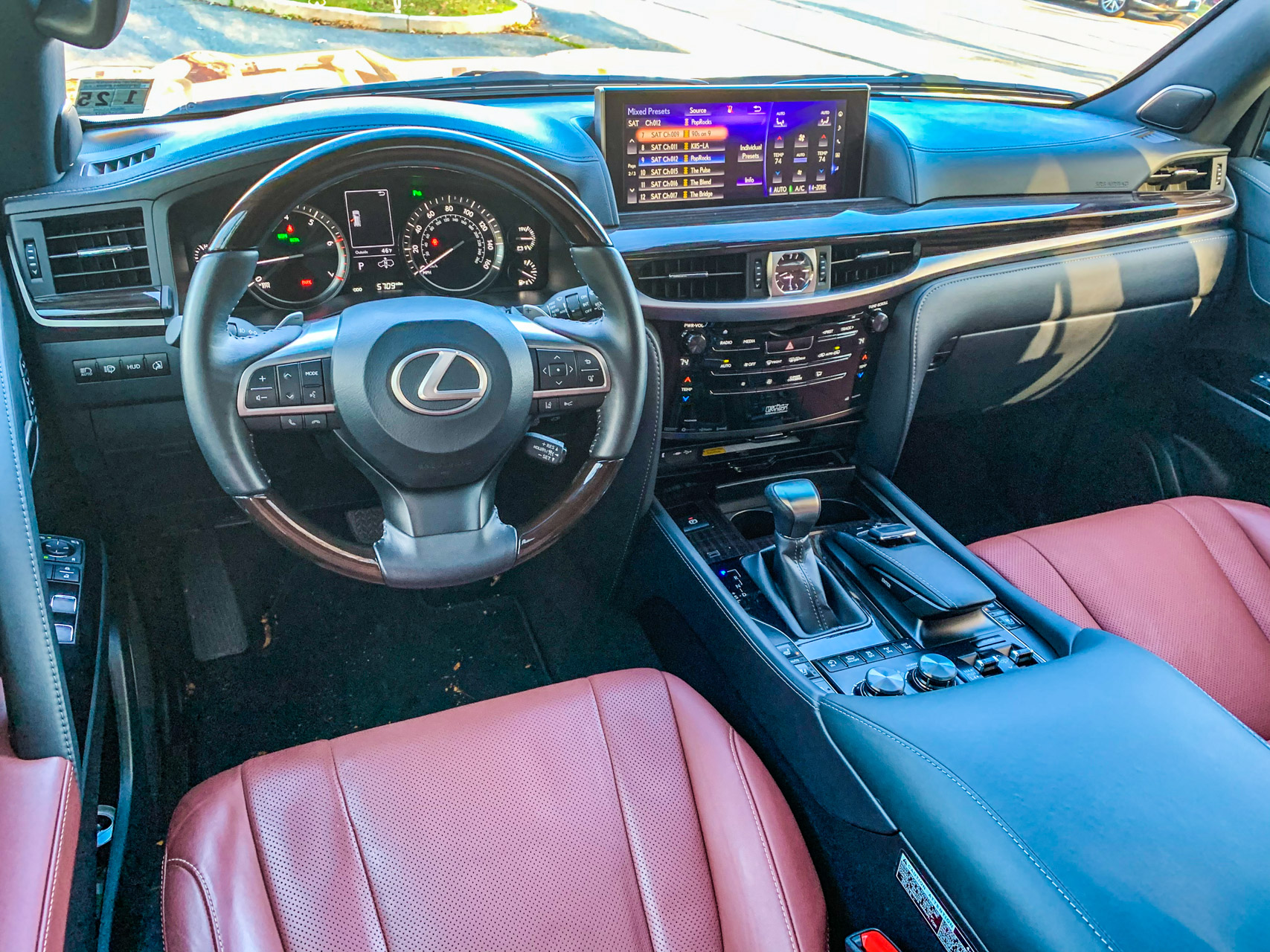 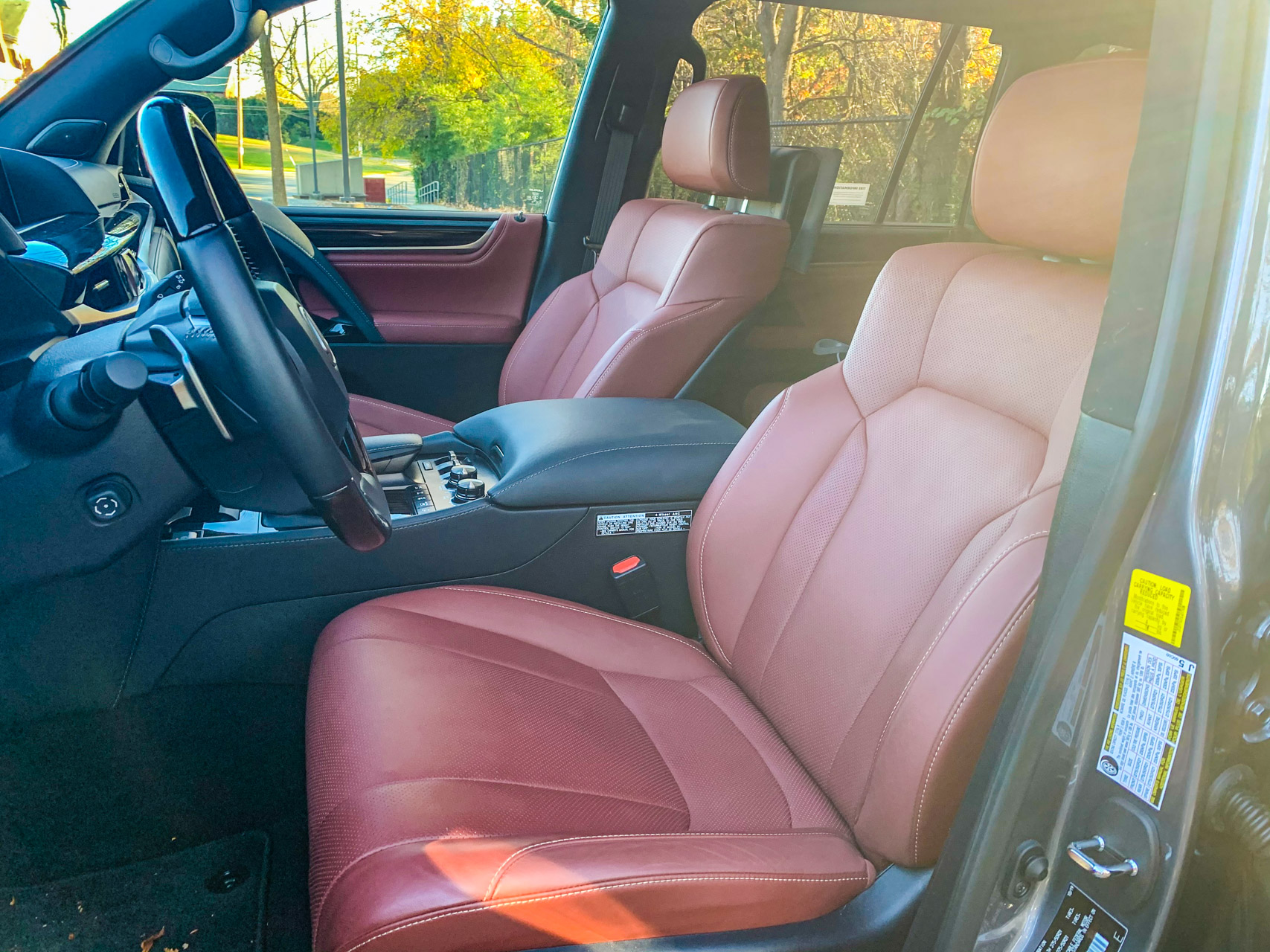 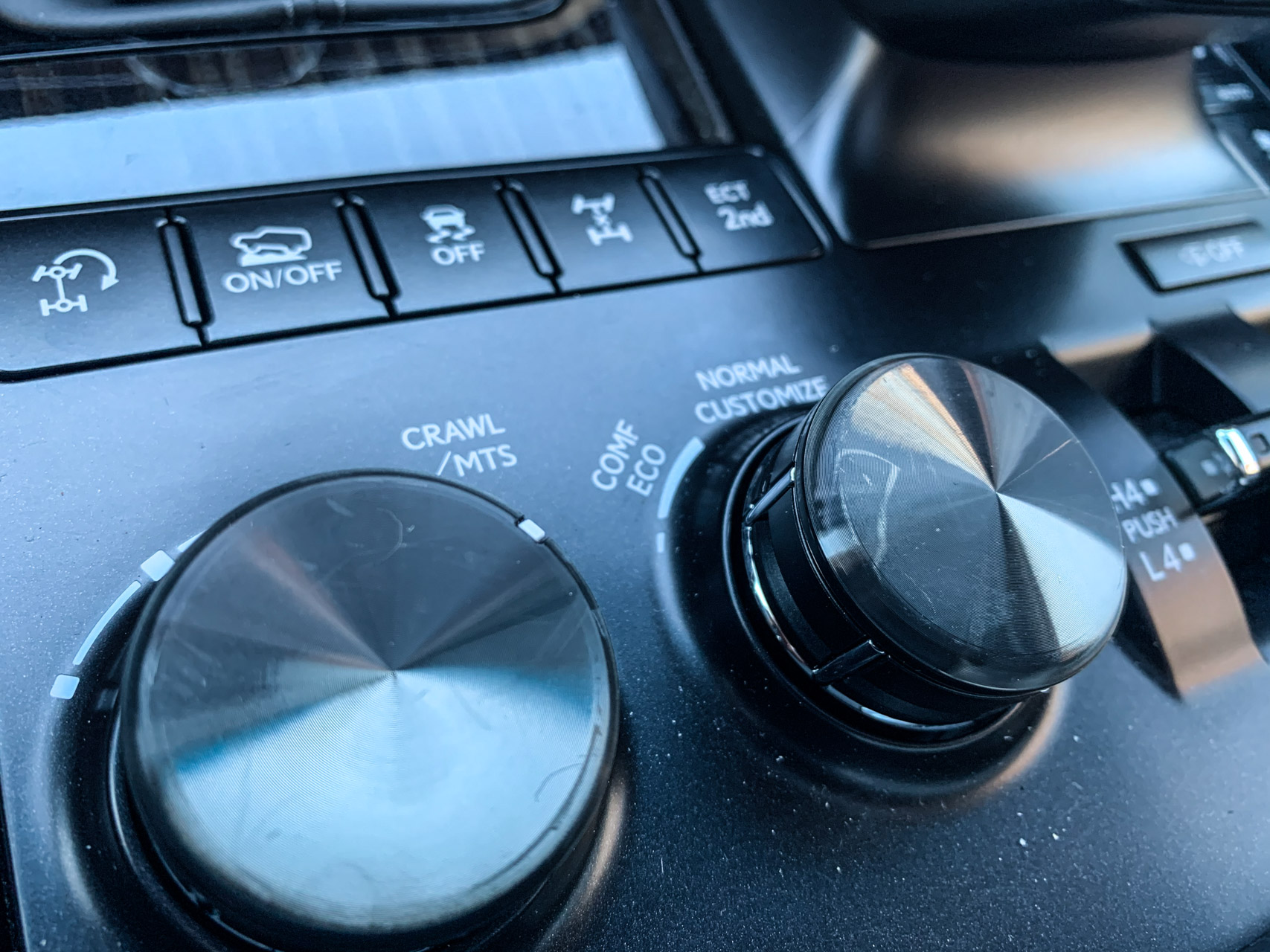 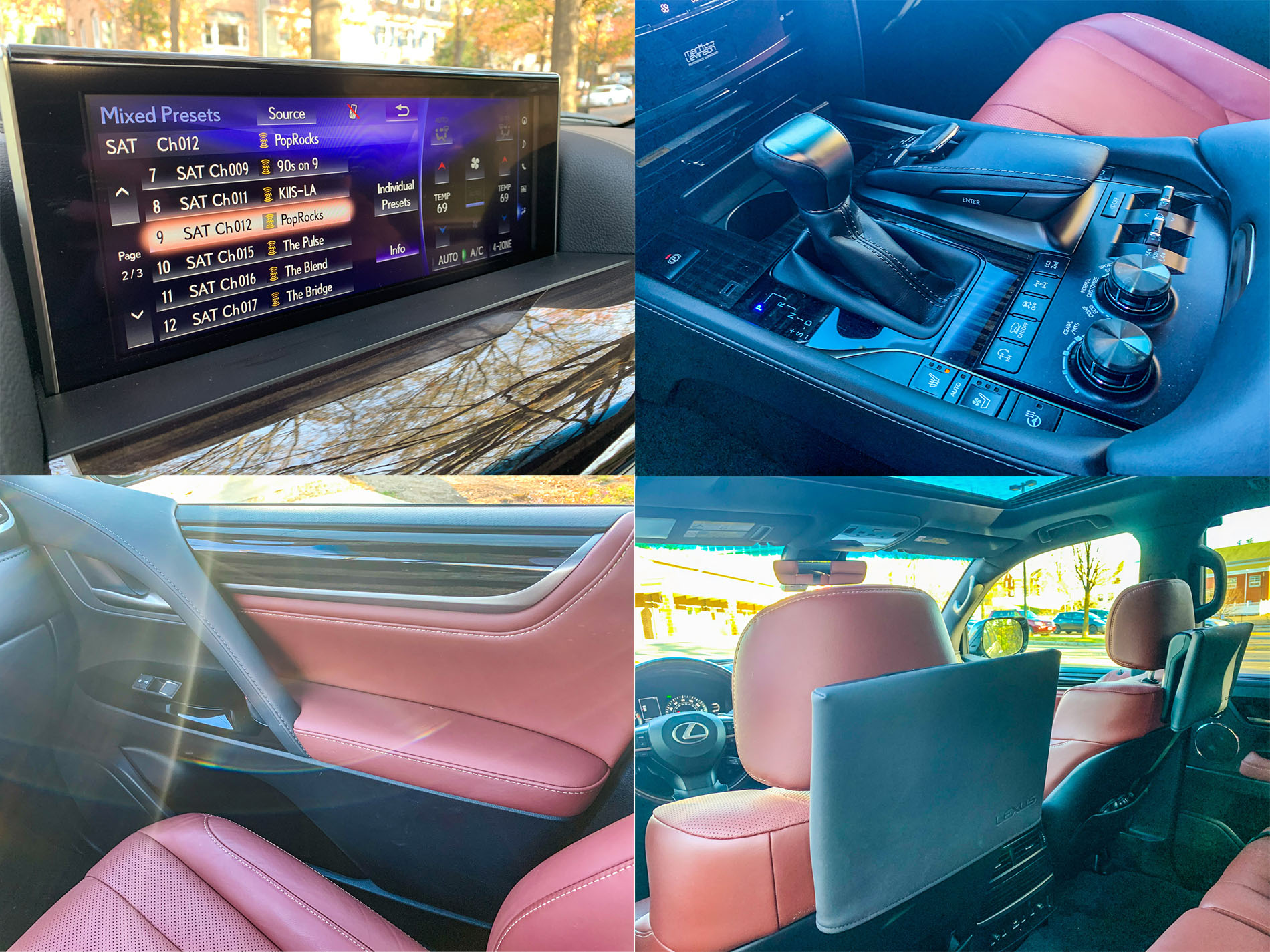