2020 Ford Escape Hybrid AWD: Why would you buy a gas-only version?

My wife and I owned a 2005 Ford Escape Limited for twelve years and close to 170,000 miles. With the exception of a torque converter that failed, it was a pretty solid vehicle that served us well. I have had the opportunity to drive every generation of Escape and have generally found them to be solid entries in the segment and were fairly competitive in their class. 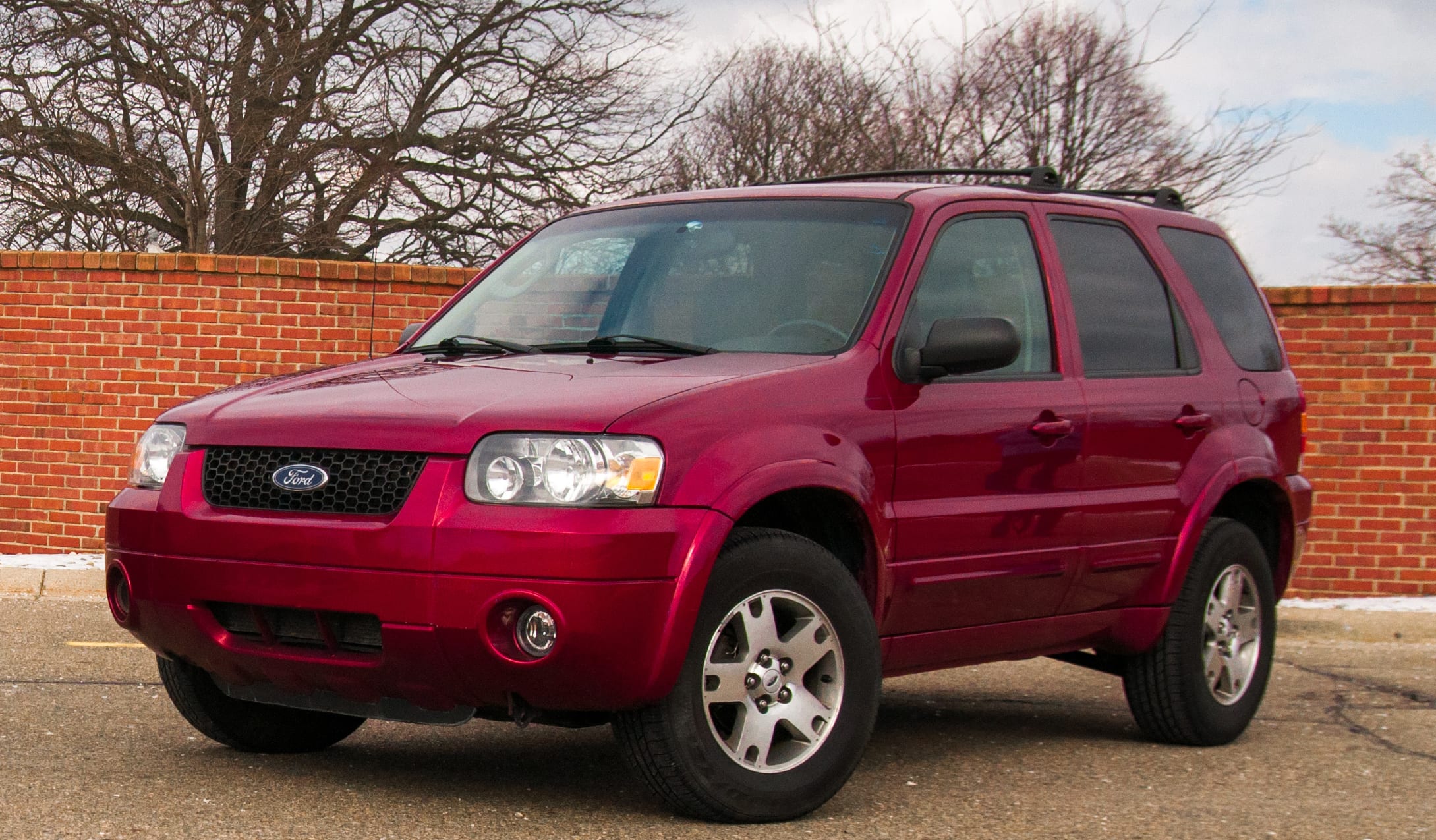 Other than Ford, the two main competitors from a sales number standpoint are and have been the Toyota RAV4 and the Honda CR-V. Others like the Mazda CX-5 and the Volkswagen Tiguan may not sell as well in volume but have a legitimate argument for being best-in-class.

When I attended the announcement of this new generation of Escape earlier in the spring it looked promising with the return of the Hybrid, now available with AWD, and an additional plug-in model. Without being able to spend any meaningful time with it or drive it at the event, I was withholding judgment. 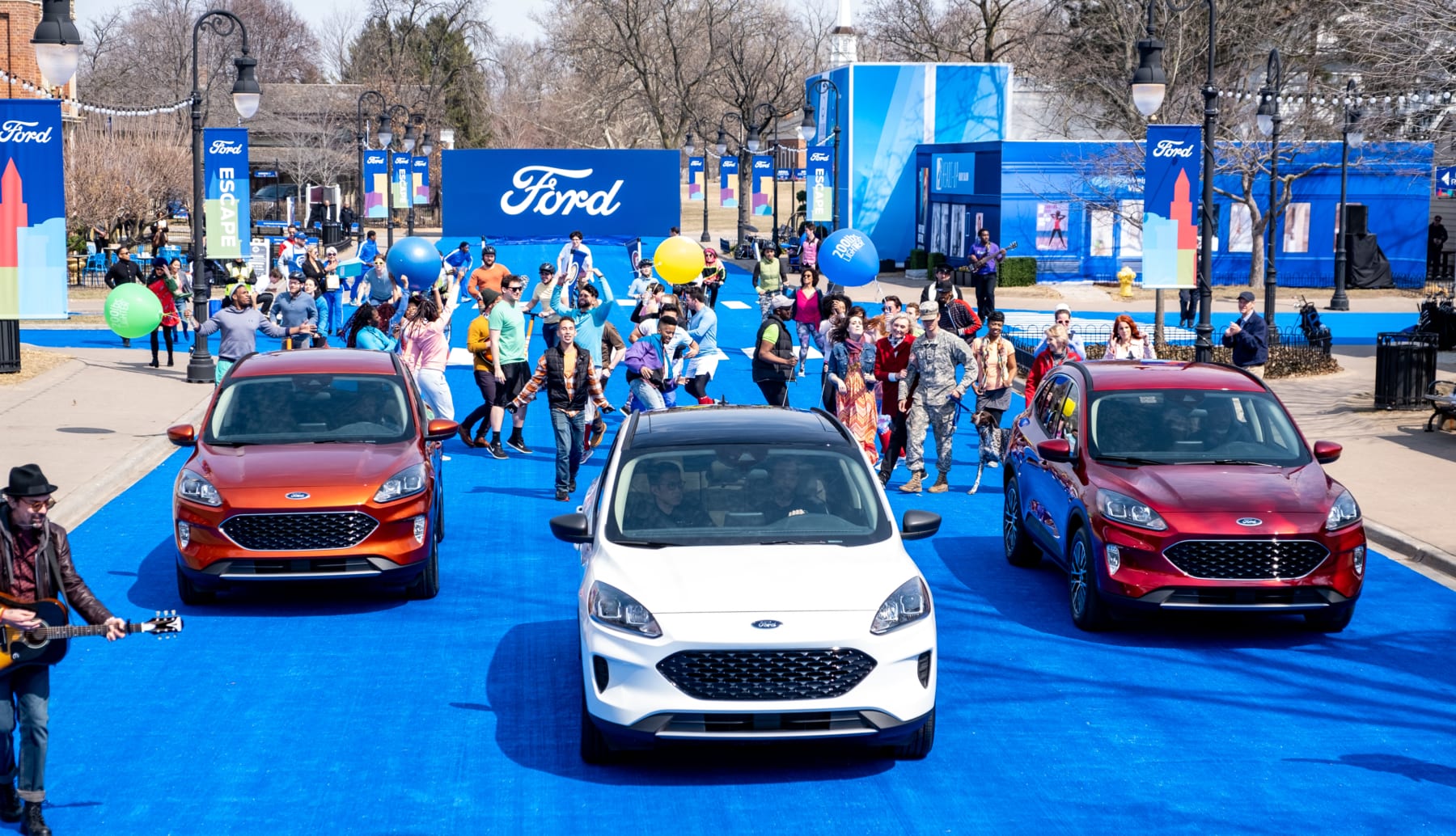 On the outside, the Escape maintains a good size. Where many of its rivals have grown in size, taller, longer, wider, the Escape hasn’t — or at least not to the extent of the others. That is a refreshing change. Every generation of Escape has softened the look of the vehicle to the point now it looks like a happy face of sorts. Clearly Ford know who buys these vehicles and have adjusted the styling to be more appealing towards that demographic. While I’m not sold on the styling, I don’t mind it. Outside the front end styling, the Escape is fairly standard “C-segment” crossover. 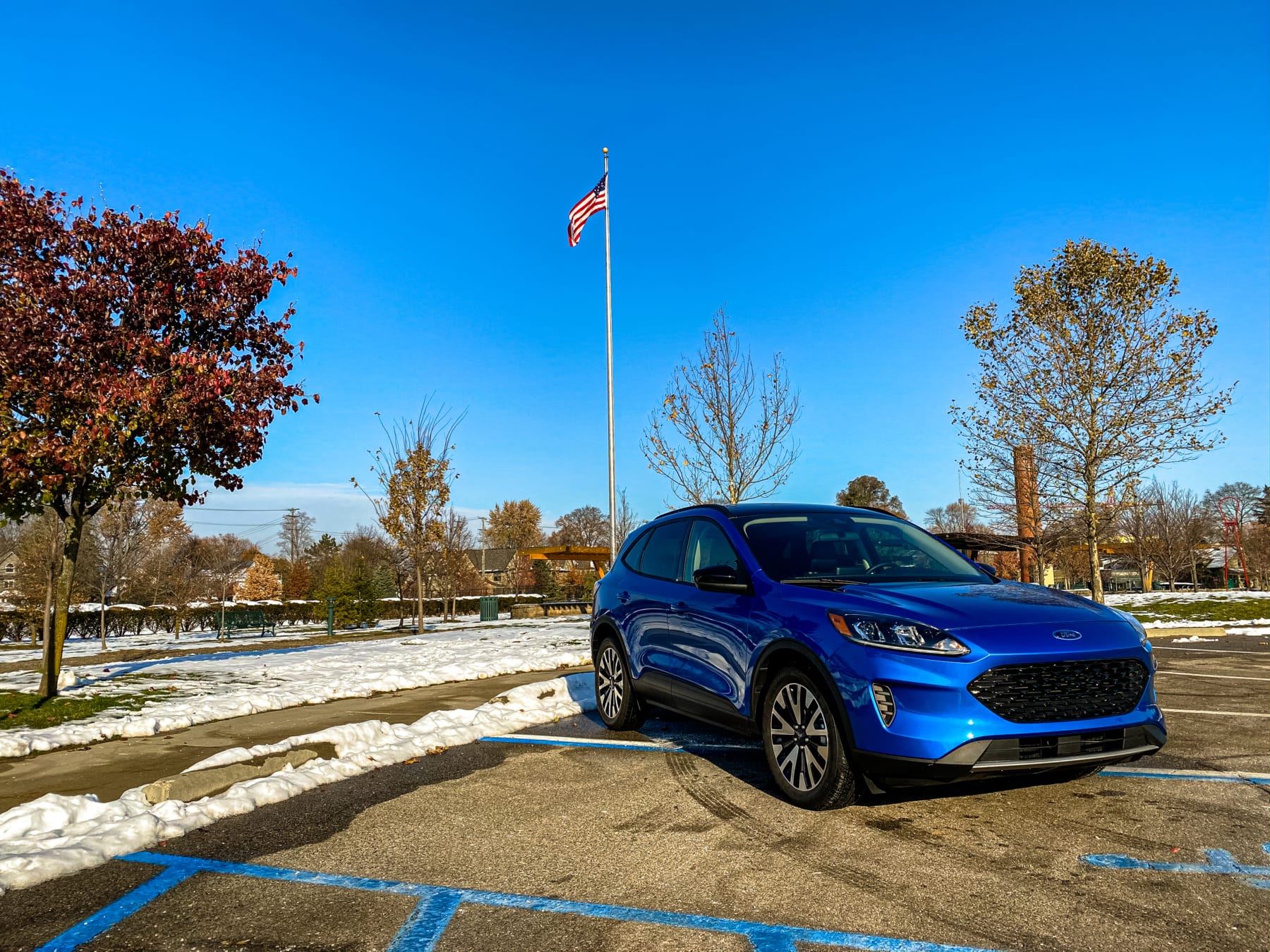 Oddly, the first thing that struck me about this AWD Hybrid Escape was that I actually sat down into it. In our Escape, I had to just slightly lift myself into the driver’s seat. Again, in an era where everyone wants to sit higher and OEMs keep raising seat heights to accommodate customer wishes, sitting down into a crossover was a (nice?) surprise. 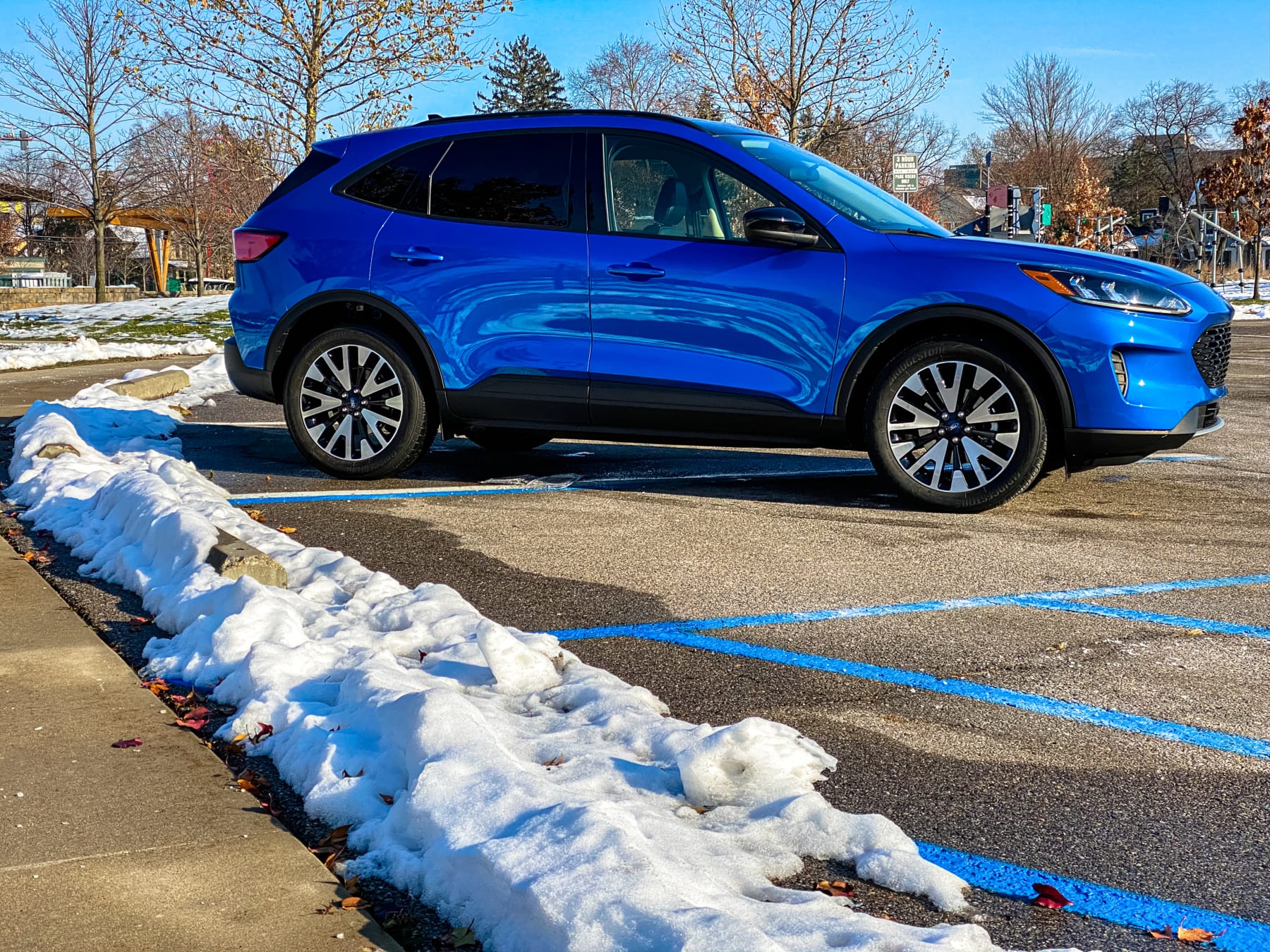 Once inside, the seating position was fairly good and it was easy to find a comfortable driving position. Materials were about as expected. This was a SE trim so there is room for better materials in higher trim levels. The instrument panel is an all-digital affair, and like the Explorer, there is a ton of potential that is not fully thought out or utilized here. 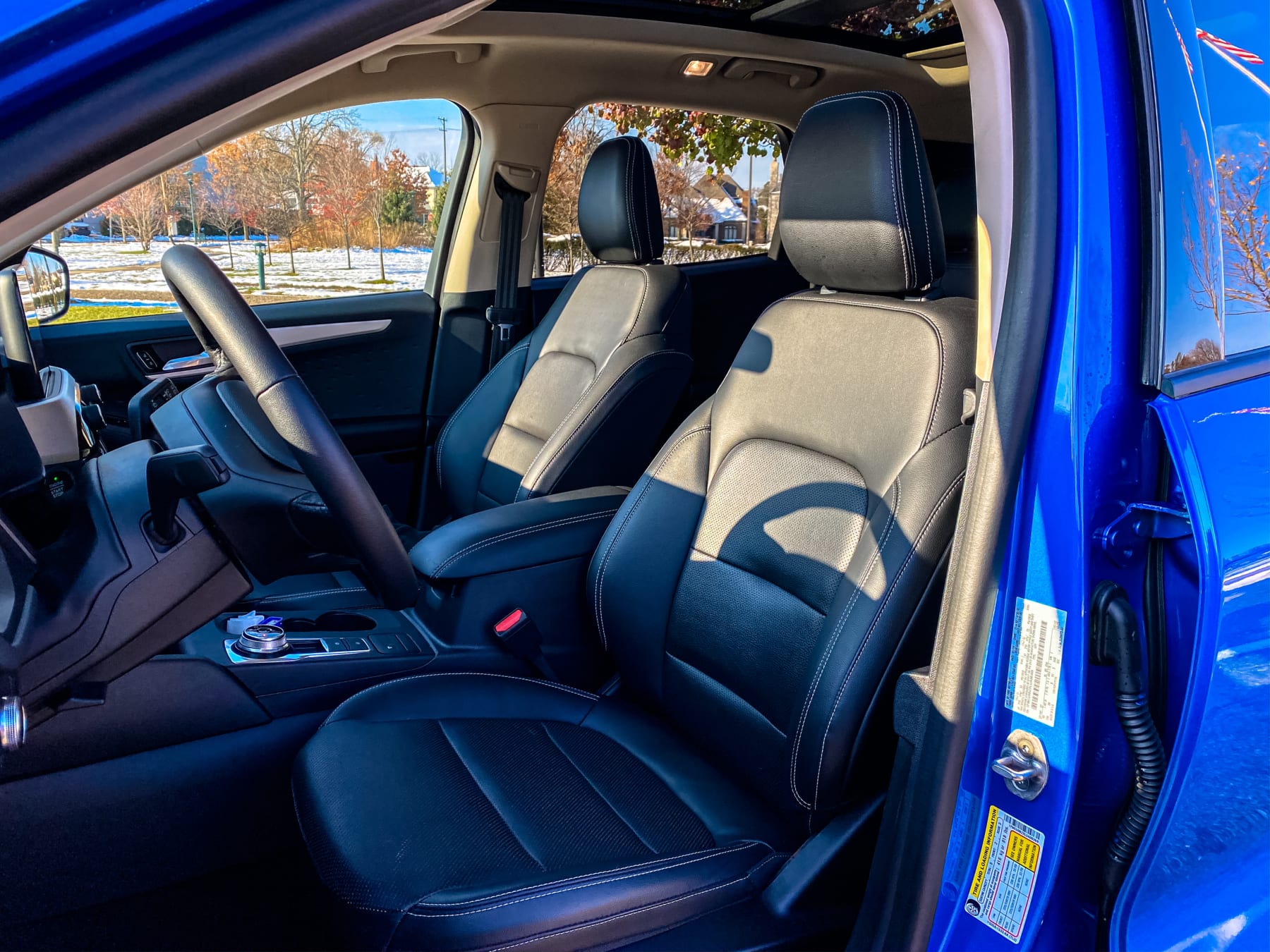 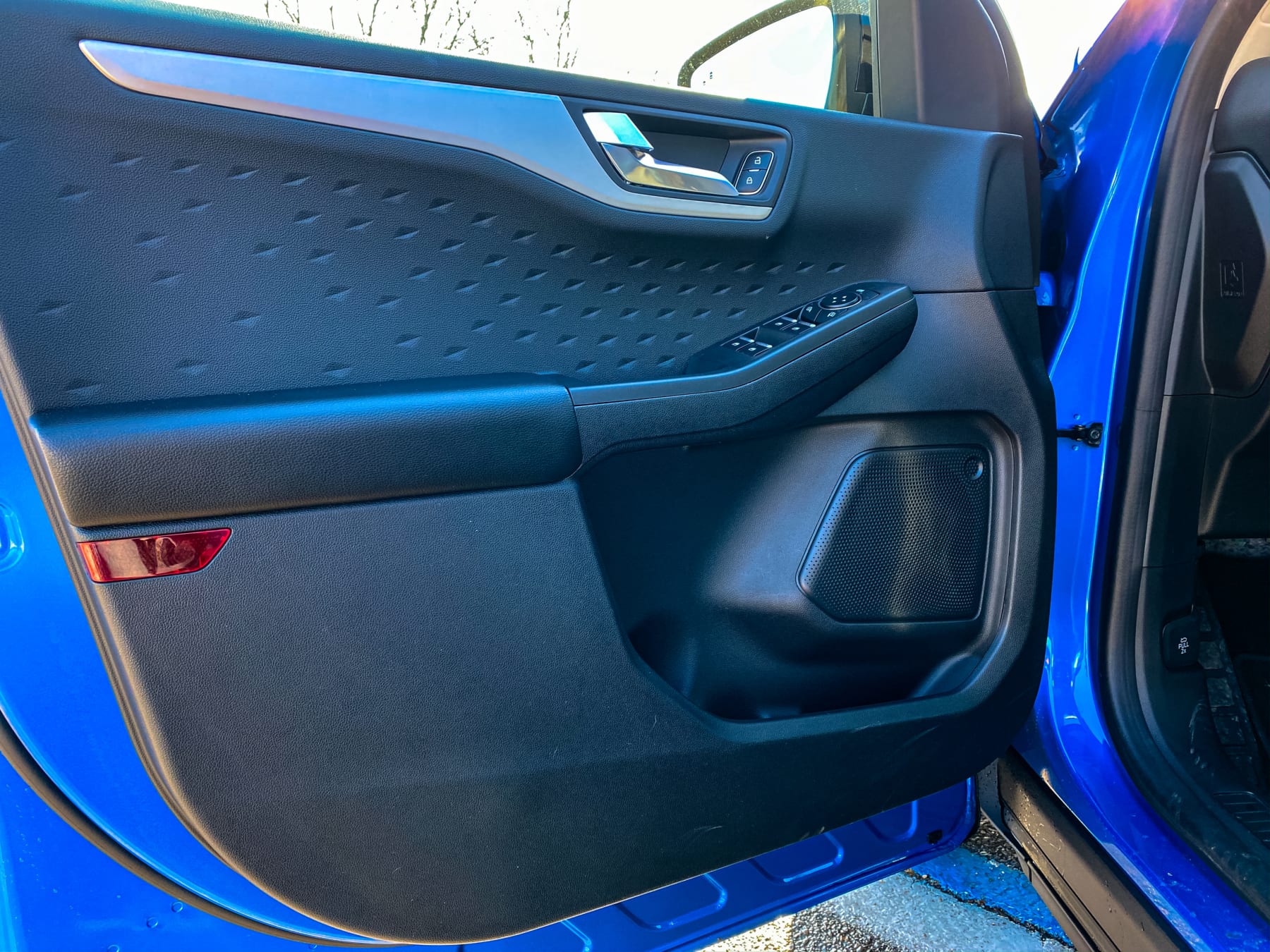 The infotainment screen worked fine, though the tacked-on look is not great. This is not exclusive to Ford by the way. This laziness in interior design permeates across all brands at all price points. If there was one missing feature with this interior it is that it did not have a heated steering wheel. Most everyone else at this trim level does.   Also, none of the windows’ switches were one touch down, let alone one touch up. Again, a miss in the segment. 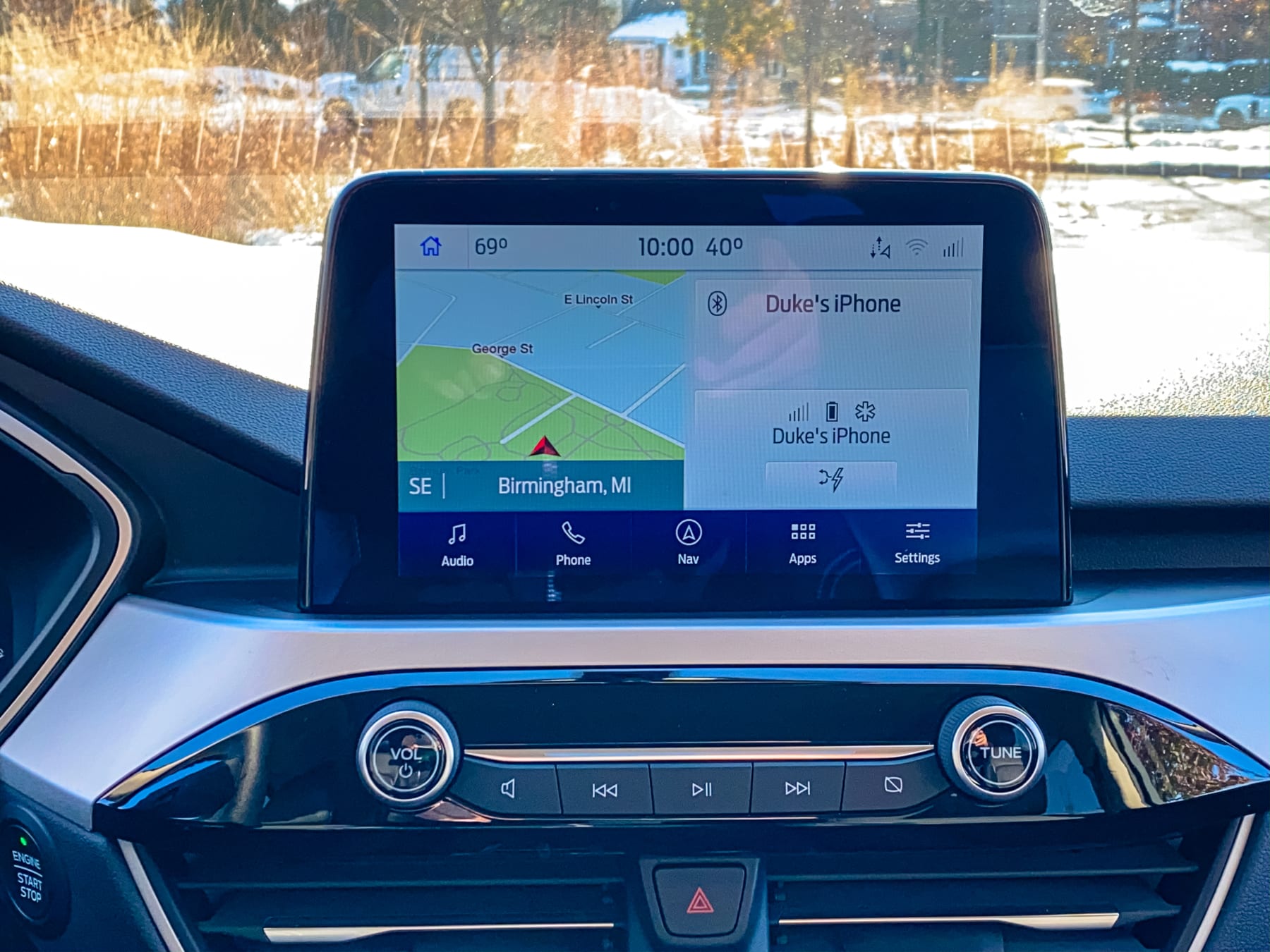 Back seat room was quite good, and with the ability to slide the seat back it gives six-foot-tall-plus people plenty of room to be comfortable. There were no USB ports for the rear seats, however, Ford is addressing this. Early build models don’t have them, but those built in and after the calendar year 2020 will have them. 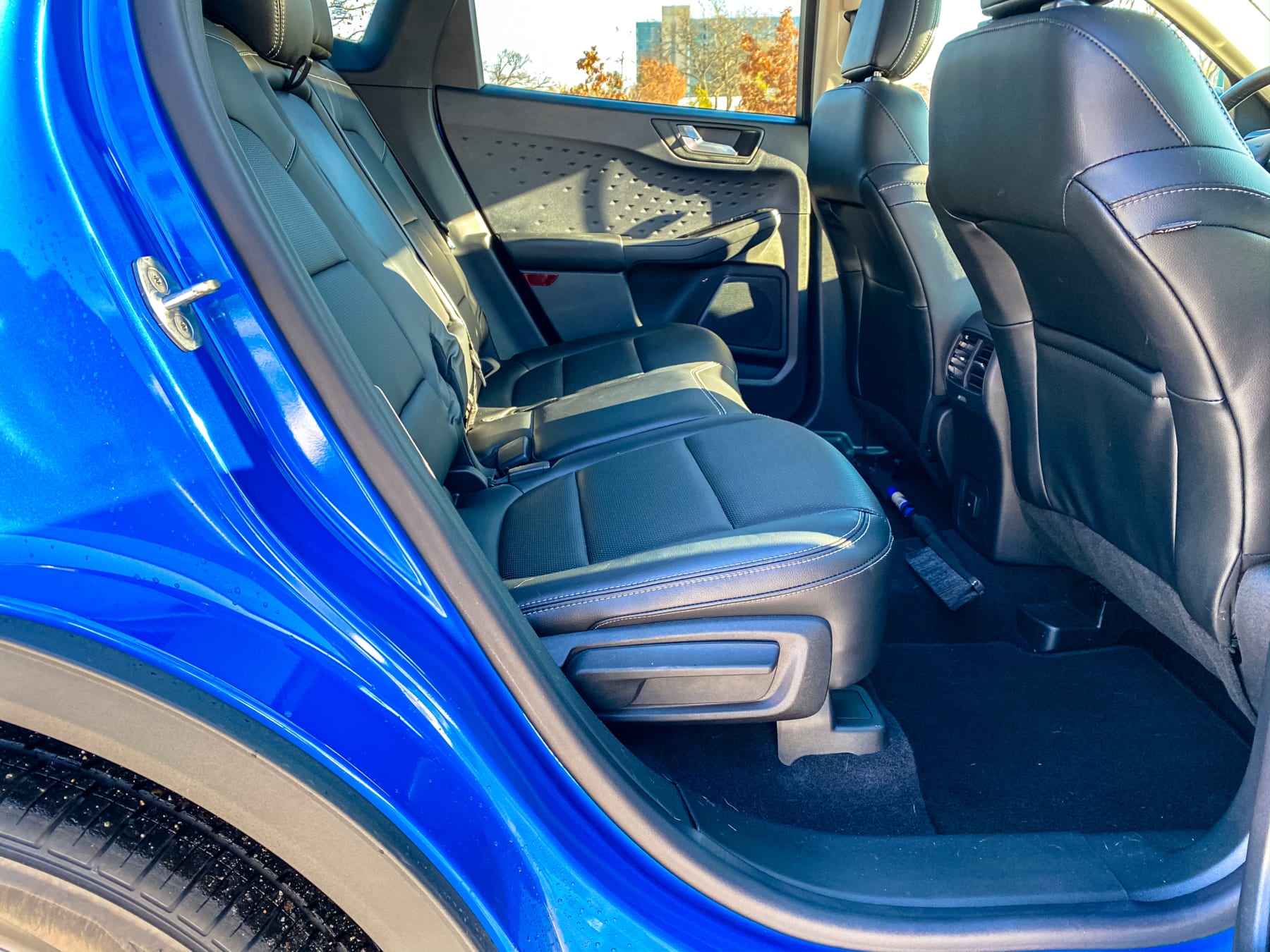 Rear cargo area is right on spec for the class. During the presentation in the spring, Ford went out of their way to show you could put four sets of golf clubs in the rear cargo area with the rear seat up. The rear seats do not fold flat (a major pet peeve for me), however, the angle isn’t too bad. My Irish Wolfhound was able to find a comfortable spot, though he couldn’t really stand up all the way up once loaded in. 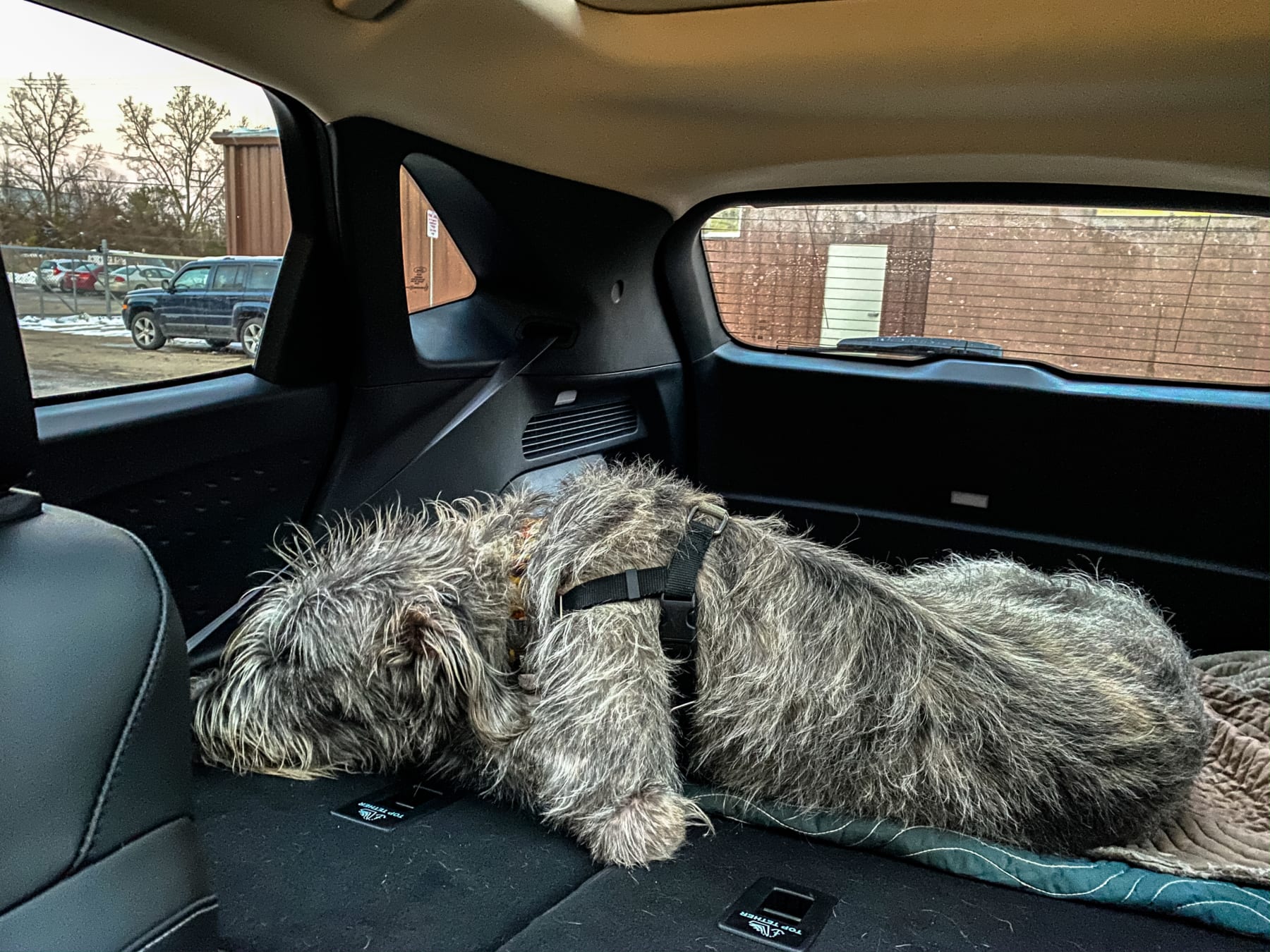 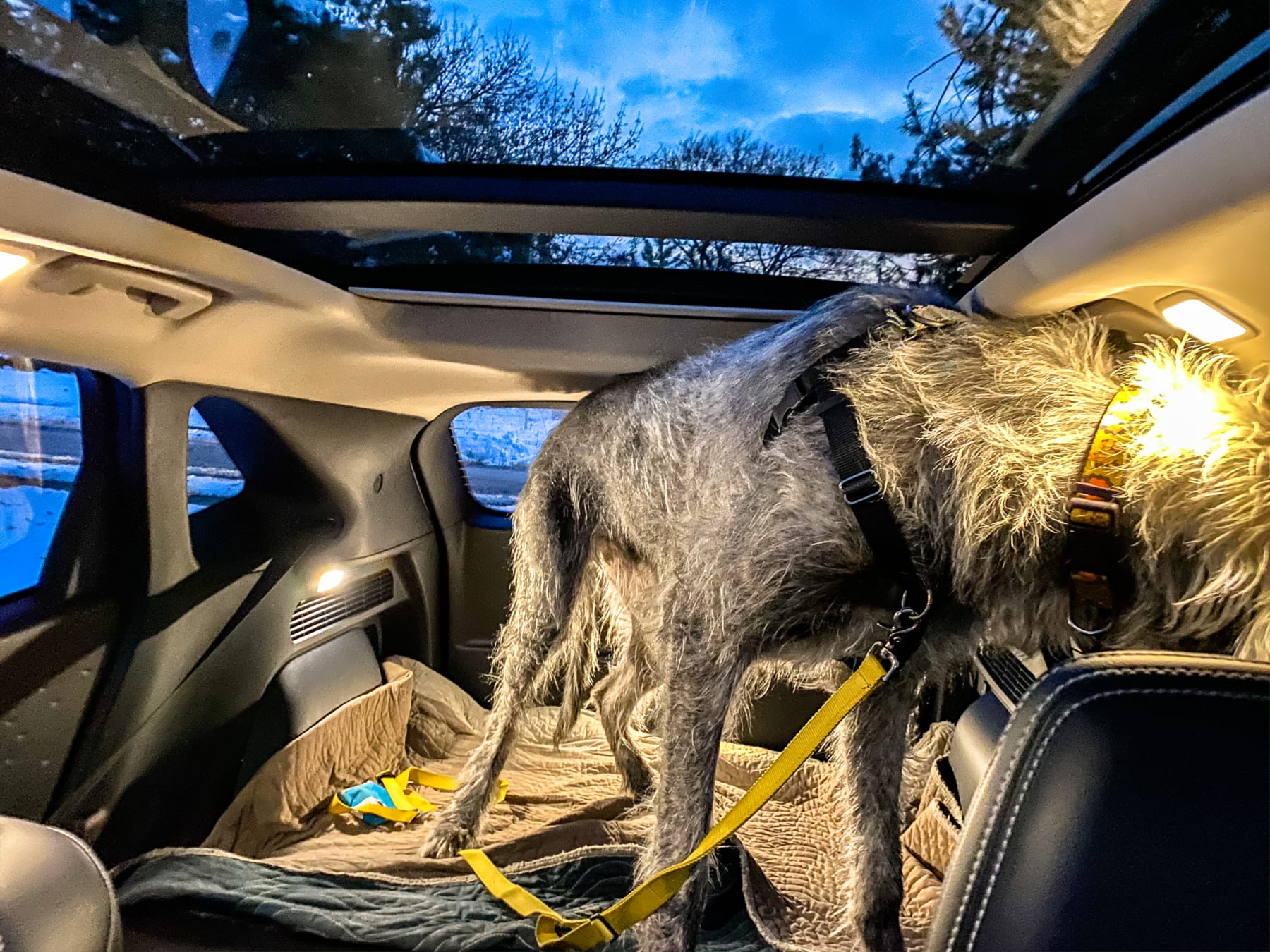 In the week I was driving this Escape we had temps in the high teens to low twenties and seven to nine inches of snow. While not unusual for mid-November in the Detroit area, it did give me the chance to see how this affected the Hybrid and battery components of the Escape.

First, I’m rarely a fan of “Eco” tires. The compounds are geared to low-rolling resistance and long tread life. Hardly ideal for traction, even less so when the temps turn cold. To my great surprise and delight, these Bridgestones were actually quite good for what they are. They provided very good traction and more importantly good braking in the cold and slick conditions. They also were quiet on the highway. Again, these compounds tend to transfer a significant amount of road noise into the cabin and these tires did not. 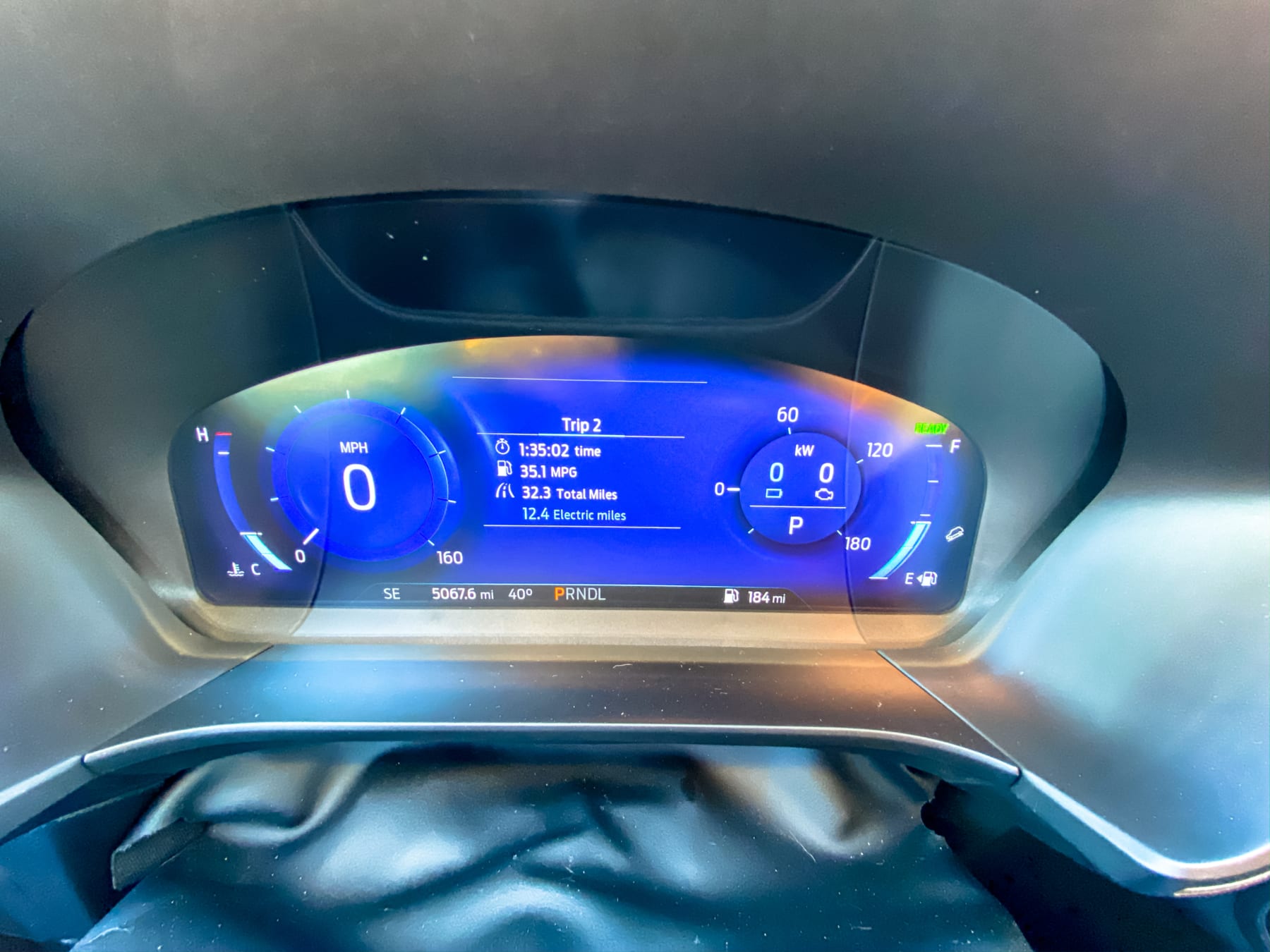 For me, the largest selling point of the Escape Hybrid is the substantial increase in fuel economy for not that much extra money — roughly $2,000 depending on trim levels. AWD is a bonus for most people. Beating a dead horse, with rare exception front-wheel drive with good winter tires is a far better and safer option than AWD with all (no) season tires. Testing and experience have proven this over and over again.

On the road, the Escape has a level of refinement you might not expect. Because of the hybrid drivetrain, it can be very quiet — far quieter than even I expected. On surface streets the ride was comfortable, geared more for comfort. It was a touch softer than I may have preferred but set up about right for its target audience. On the highway, it cruises quite nicely at 80 and the radar cruise control did a reasonable job. So many systems are overly aggressive in cutting speed and maintaining distances, but Ford’s was one of the better ones I’ve experienced.

Personally, I like the Tiguan and the Mazda CX-5 the best in this segment, the CX-5 only since the new turbo motor. I’ve yet to spend any real time in the current RAV4 so I need to hold off on that, but it a quick examination of it seems like a much larger vehicle than the Escape. The CR-V is very good, it is just a little too clinical for my tastes. I say this as the owner of a Honda Element. 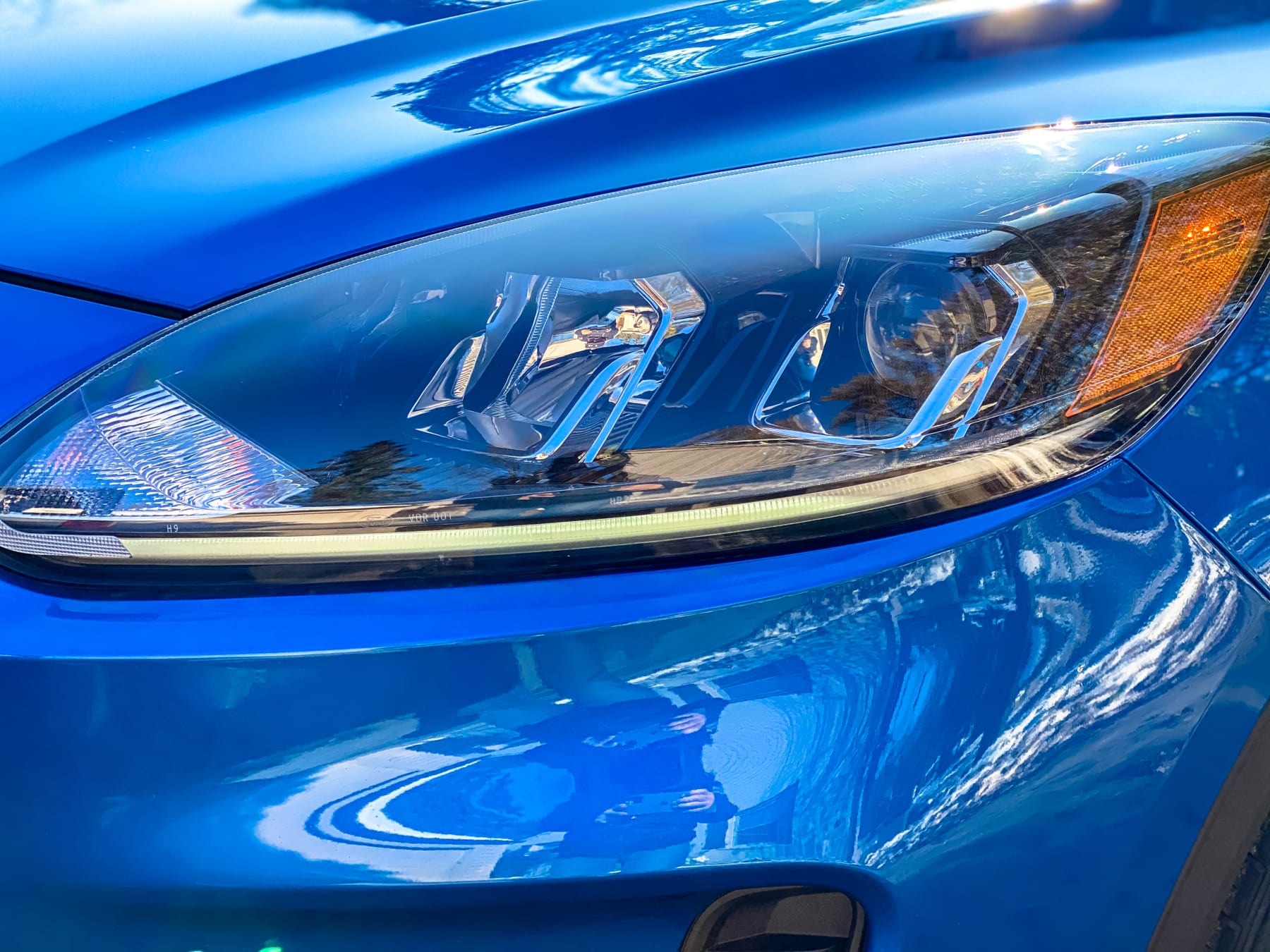 That aside, the Ford Escape Hybrid is a very intriguing vehicle that is well executed and is competitive in its segment. Given the small premium for the Hybrid and the substantial increase in fuel economy, along with the good driving dynamics, I see little reason to get the gas-only powertrain. Skip right to the hybrid. With delivery the MSRP on the Escape Hybrid SE was $34,245, depending on where you live and when you are buying you may find it for less. However, I can only go off of MSRP and at that price, I think the Escape Hybrid is very fair value for money in the current market. It should be on the shortlist of vehicles you test drive if you are looking to purchase in this segment.