There is a reason that many of us enthusiasts pine for the 1990s. You had the rise of some amazing Japanese cars that were not only a lot of fun to drive, they were also magically reliable. Since then there has been a decrease in cars that are both desirable and reliable. It’s hard to pinpoint the exact moment, but some time since the 1990s, both Honda and Toyota, and their respective luxury brands, certainly saw a downturn with regard to both desirability and performance. Meanwhile almost all of the European brands continued to become even more desirable, with reliability being, well…subjective. Recently though, both Honda and Toyota have started to find their mojo, so I was excited to drive this 2020 Acura TLX PMC for a week since it was screwed together by NSX engineers. Let’s see if it’s got it where it counts. 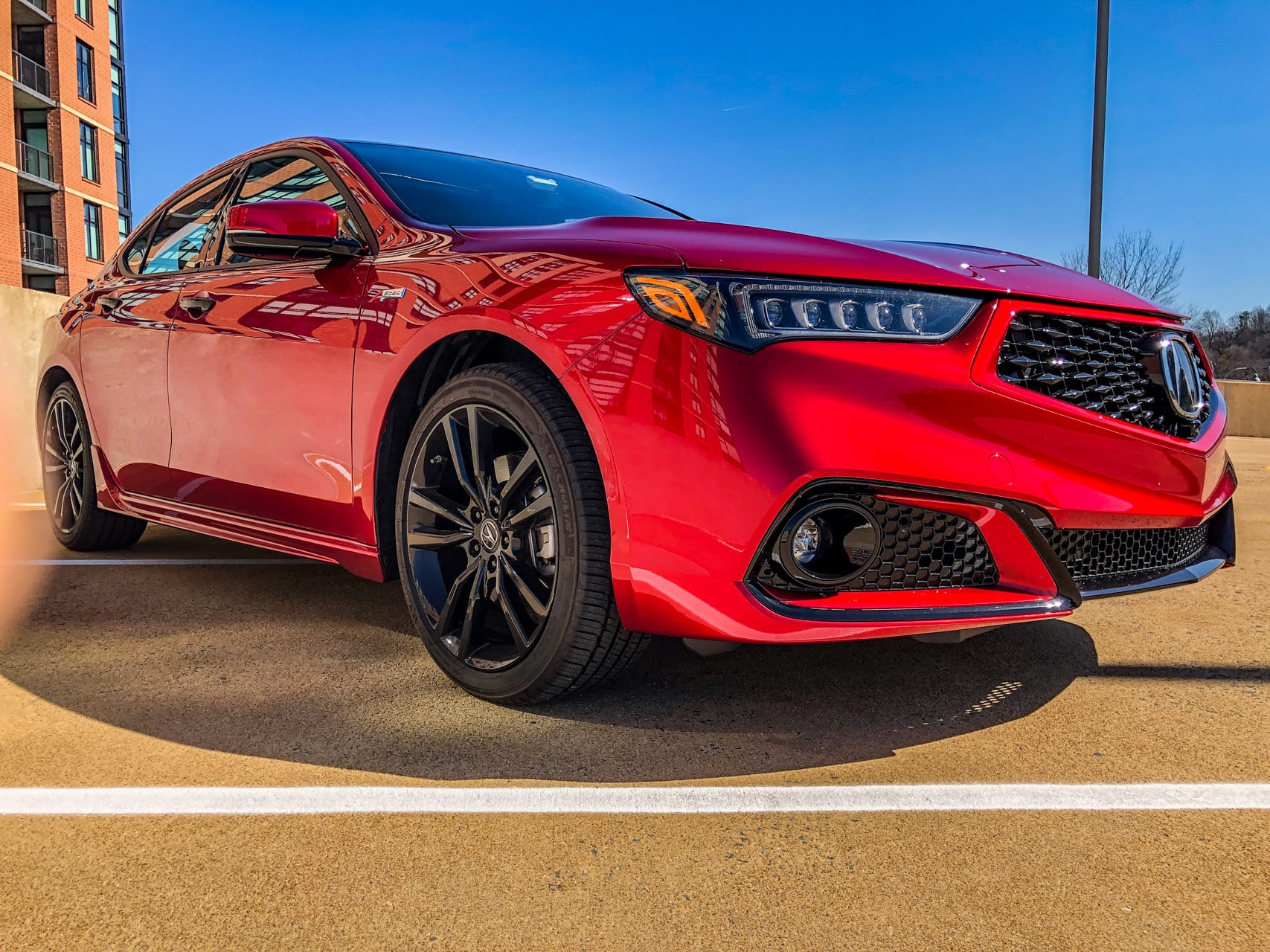 I always like to start these reviews with some context for the reader about the car I’m testing. If the TLX sounds like a weird amalgamation of the TL and the TSX, that’s because it absolutely is just that. The TL and the TSX both had good runs, the TL was produced 1996-2014 and the TSX between the 2004–2014 model years. I look back on both fairly fondly, especially the TL, which replaced the Acura Vigor. It was Acura’s best selling car before the MDX came along. I remember being just out of college and seeing the Type-S versions of the TL and CL and thinking “yeah, I want one of those”.

Unfortunately I had TL dreams on a Civic budget, so it didn’t happen. I had a friend named Pedro who got into amateur racing about the same time I did who drove a third gen TL Type S and absolutely embarrassed some people in smaller, sportier, cars. The TSX was a smaller version of the TL, but still had a great fun-to-drive attitude with Honda reliability.

It was not shocking when Acura made the move to combine the two cars. The new-for-2015 TLX came standard with a 2.4L 4-cylinder and was only $360 more than a TSX. Based largely off of the 9th generation Honda Accord, the TLX builds on that platform as a sportier and more luxury-focused offering. 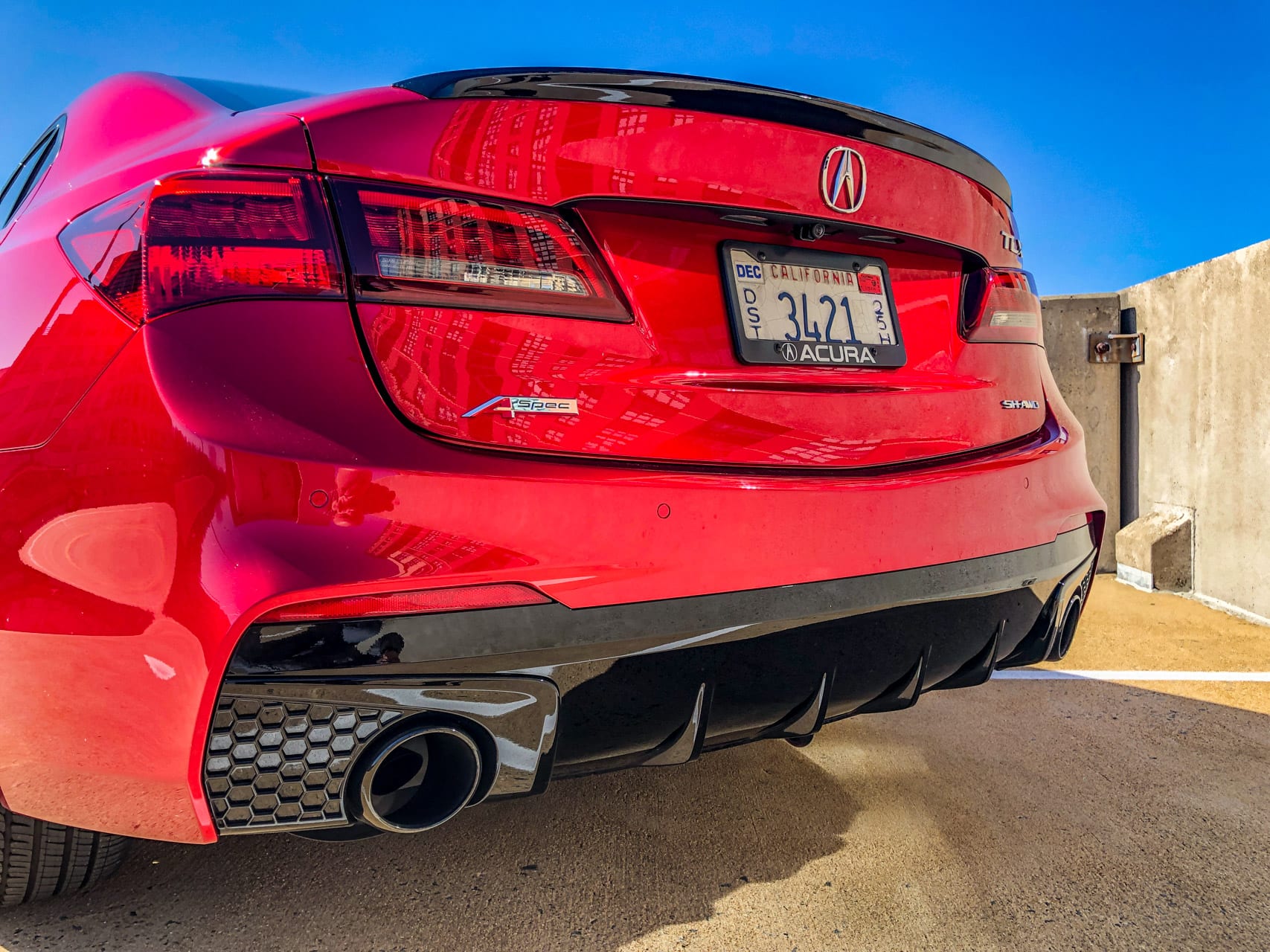 Acura does things a bit different when it comes to new car trim levels. Instead of choosing a specific TLX trim off the bat, you just add the package that most suits your needs later on in the build. So a regular ole TLX will start you at a very reasonable $33,000. Before you get to the package section, you have to choose your paint color, interior color and material, wheels, and eventually drivetrain. 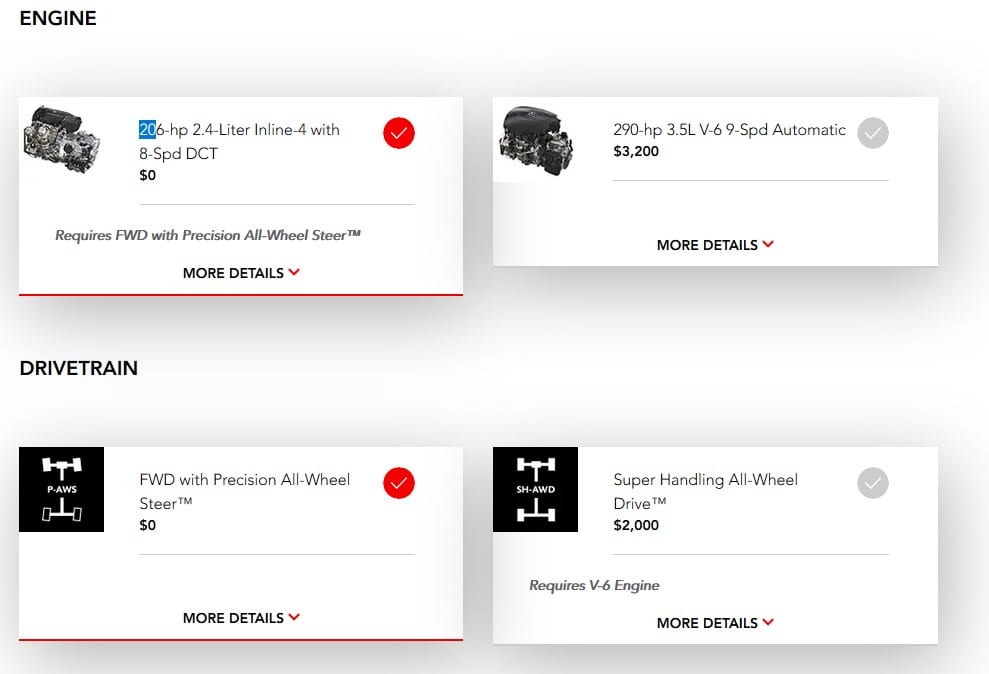 Opt for the bigger engine with SUPER HANDLING ALL-WHEEL-DRIVE  (SH-AWD) (sorry, feels like something that would be yelled loudly by a Best Motoring commentator!) and you’re up $5,200 to a bit over $38,000 total MSRP.

Add all those packages and you’re at $48,450 which is roughly equilavelent to the as-tested price of our special edition PMC. Here, check it out. 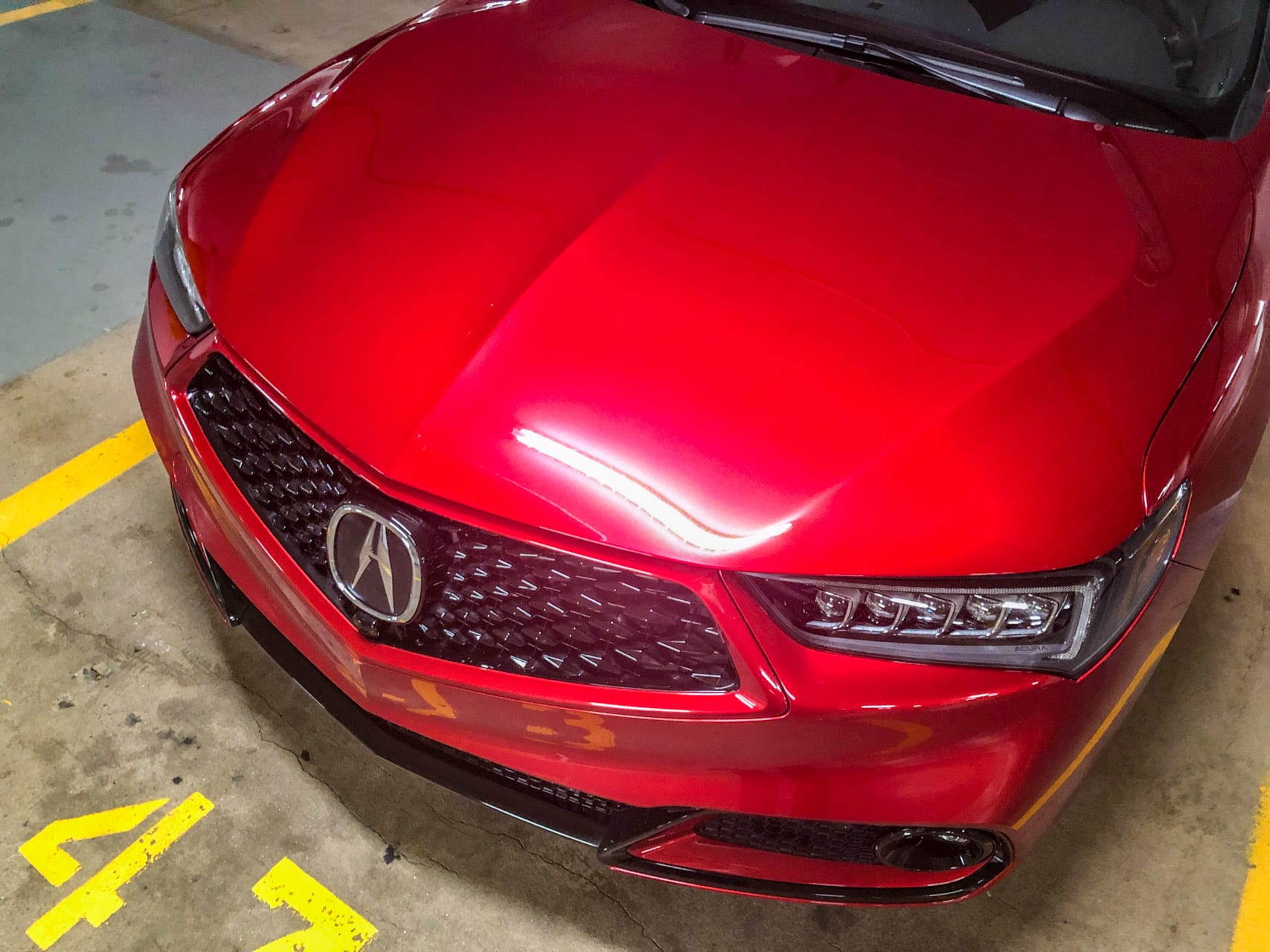 Here’s a full list of the TLX PMC’s features:

So as you can see, it’s pretty loaded. The biggest party trick though is the Valencia Red Pearl paint. A white TLX body arrives at the Performance Manufacturing Center (PMC) in Marysville, Ohio. From there, all assembly and finishing work happen at PMC, where the same technicians that assemble the NSX build the TLX PMC. The paint is magnificent, more on that in a bit. 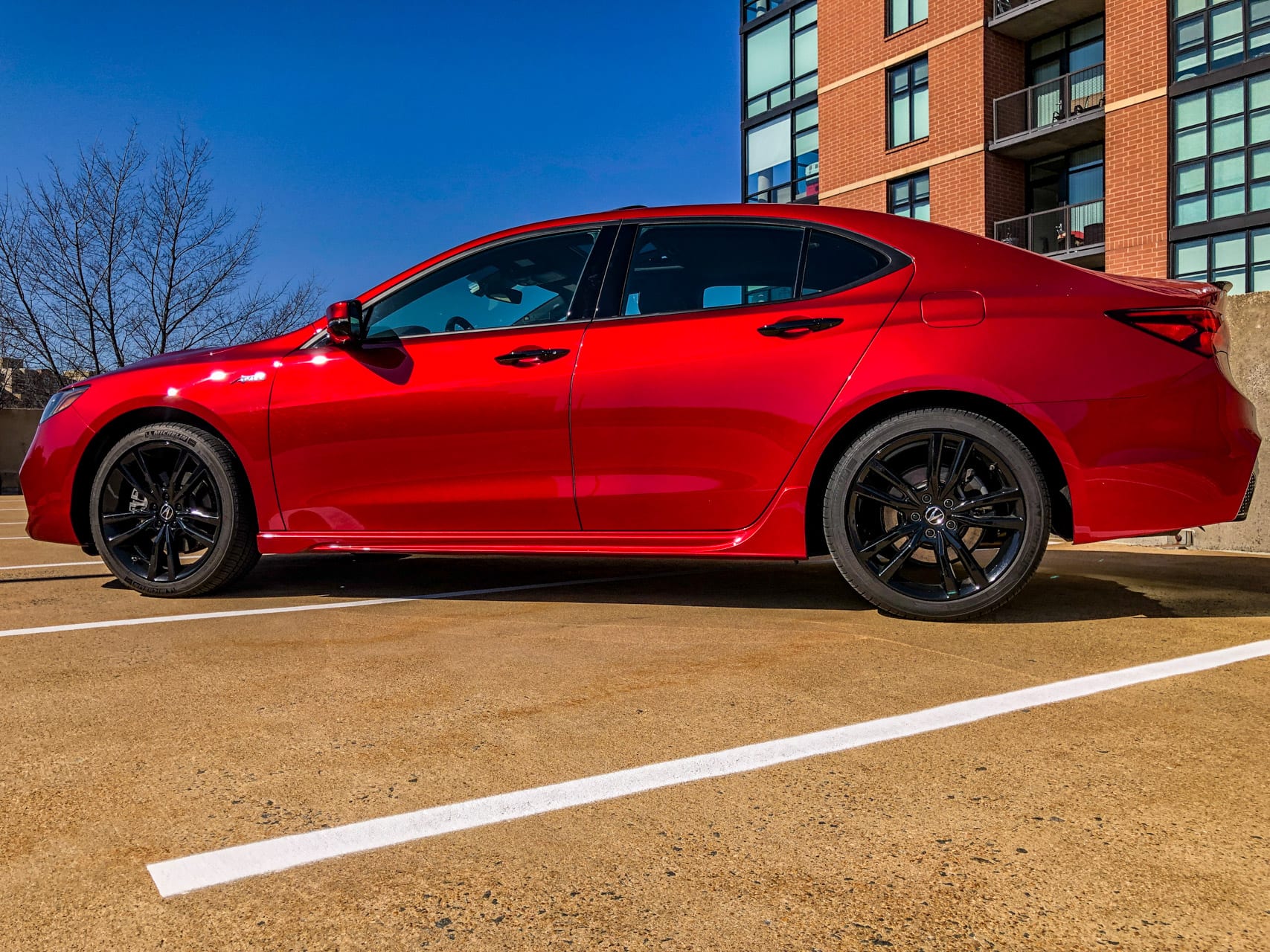 I’ll start with the exterior – that paint color, omg hnnng! In a sea of boring color palettes, this thing stood out in every parking lot I left it. I also like the blacked-out trim and the small, tasteful, lip spoiler on the back. Overall, there isn’t much I would change about the PMC on the outside. The old Acura beak has been replaced with a cool, futuristic, looking grill that has improved the look of the entire lineup. 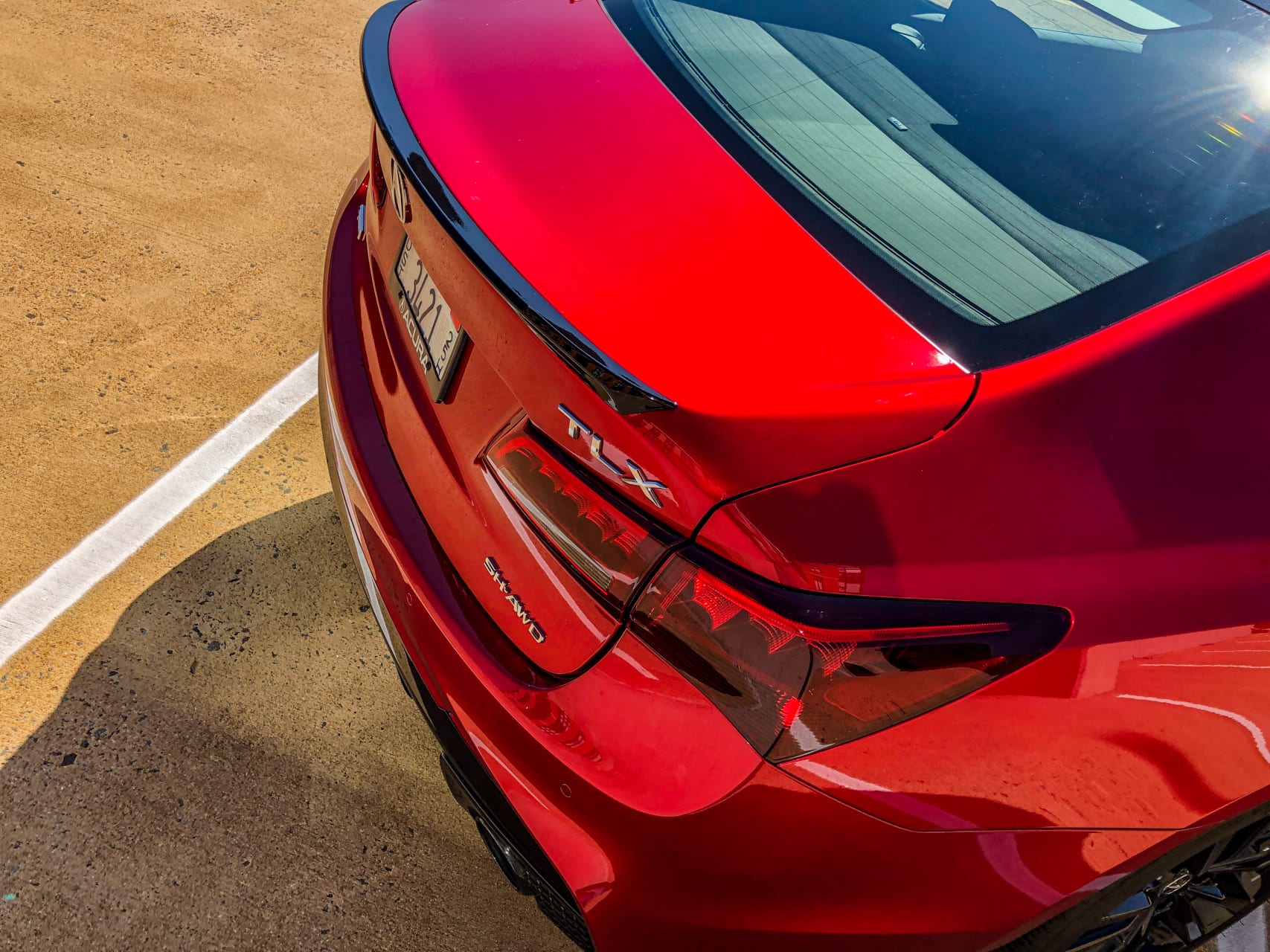 On the inside, I like that there are two screens. That means the one up top automatically handles Apple CarPlay, while the other one will show you a bunch of other items. It’s not just one or the other like in most systems. The upper screen is not a touchscreen however, so you have to use the menu dial lower down on the dashboard. It doesn’t fall quite as easily to hand as those on some other setups. I also don’t like that you can’t press the outer silver part in to select something, you have to move your finger over to the enter button in the middle. Minor, but it got old. 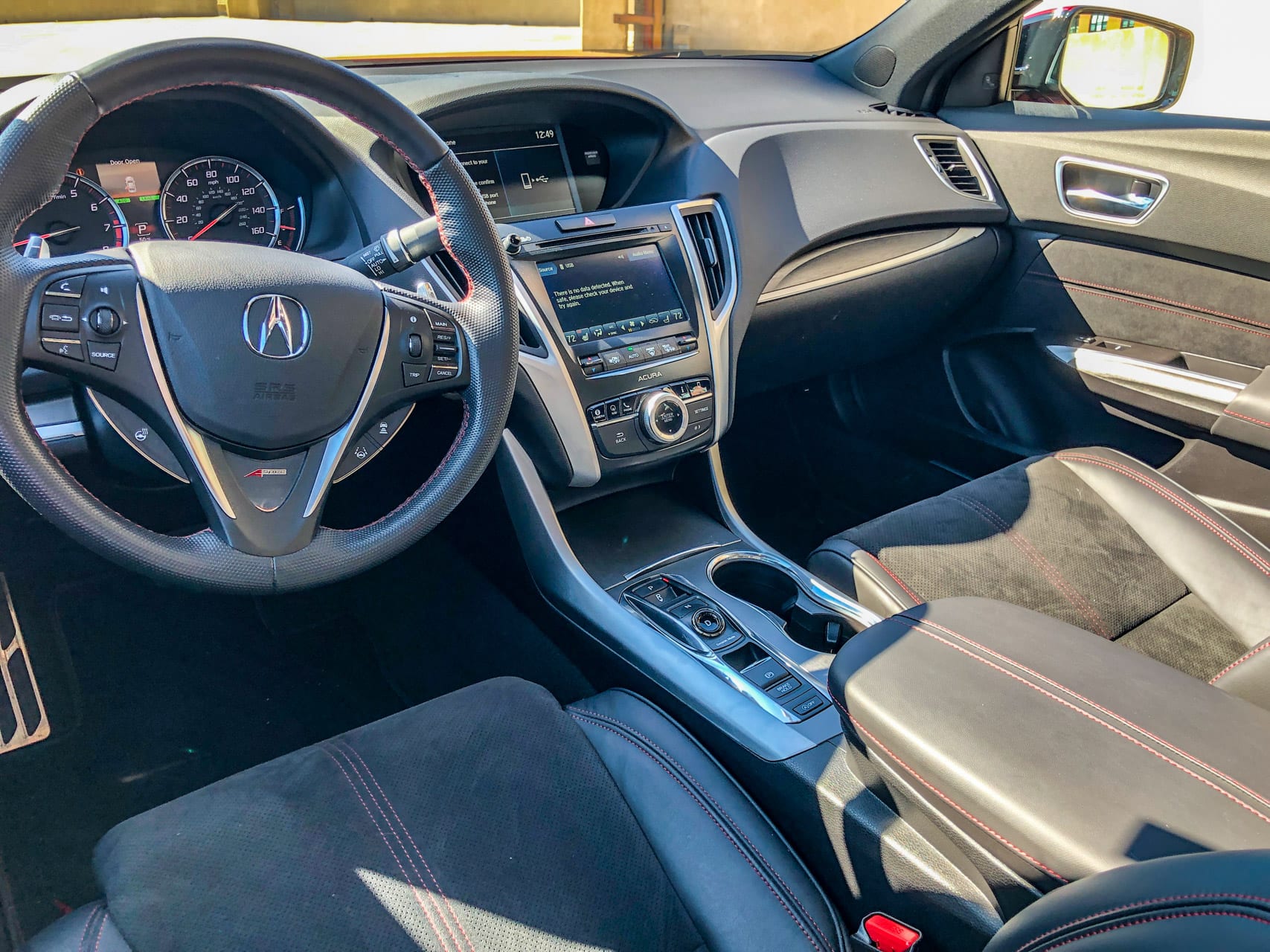 The seats are excellent and adjust in all the right ways. The driver’s seat even has that extendable bit that supports your quad muscle area. 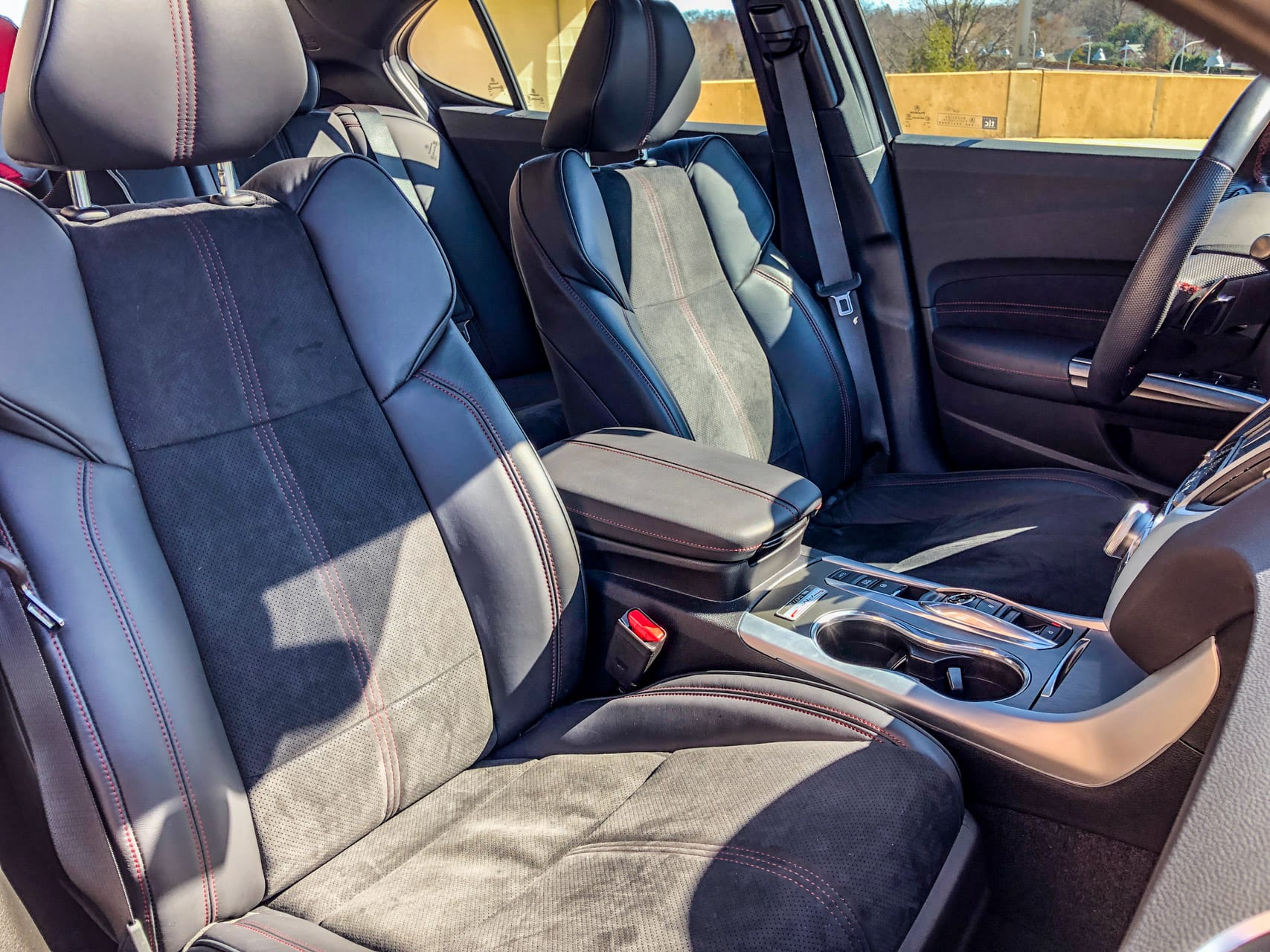 Throughout the rest of the interior, the paddle shifter has good heft but still feels a little plasticky. Which it likely is, they are listed as “metal finished”.

The automatic door unlock function didn’t work all the time. The car is supposed to sense that you are coming and light up the area next to the door, expand out the mirrors, and generally welcome you to your TLX. I found that if you came up to it at the wrong angle, it didn’t always know you were there and when I put my hand in the handle, nothing happened. 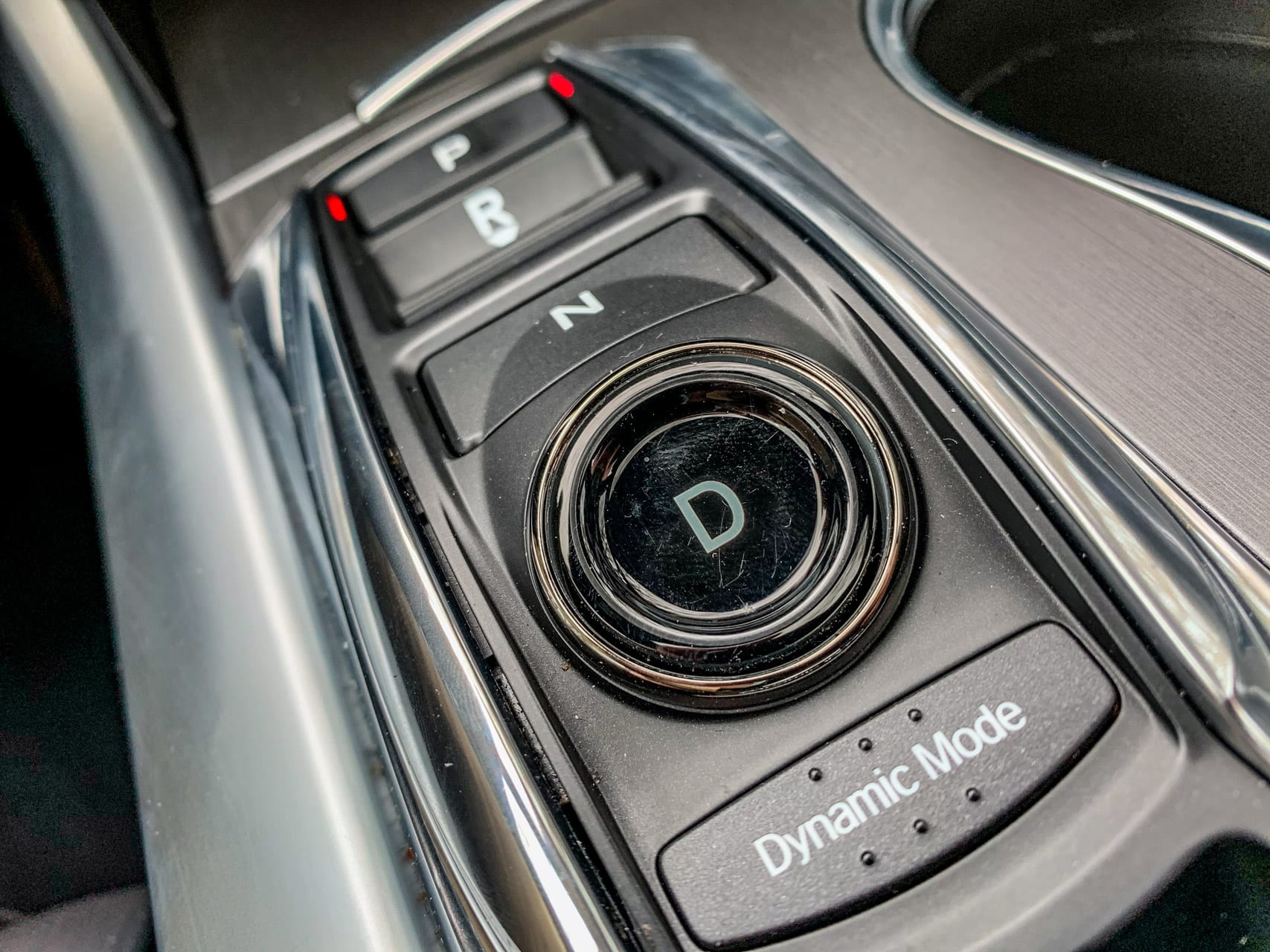 The TLX PMC drives like a normal TLX because it is. You won’t really notice any meaningful performance upgrades on the PMX. That could be seen as a minus, but the torque-vectoring feature within the Super Handling All-Wheel Drive system is pretty damn impressive. Up to 70% of all torque can be distributed to the rear wheels, but what’s cooler is that up to 100% of that torque can be distributed to the right or left rear wheel.

Wow, you can read the brochure!

In real-world talk, unlike some AWD systems I’ve tested that seem to bias towards FWD most of the time, I encountered no front end push/understeer with SH-AWD. Generally speaking, I could plant my right foot and the car would stick to the line I chose. I obviously didn’t get any track time in the TLX, that would be the real test. But for daily driving, I enjoyed it immensely. 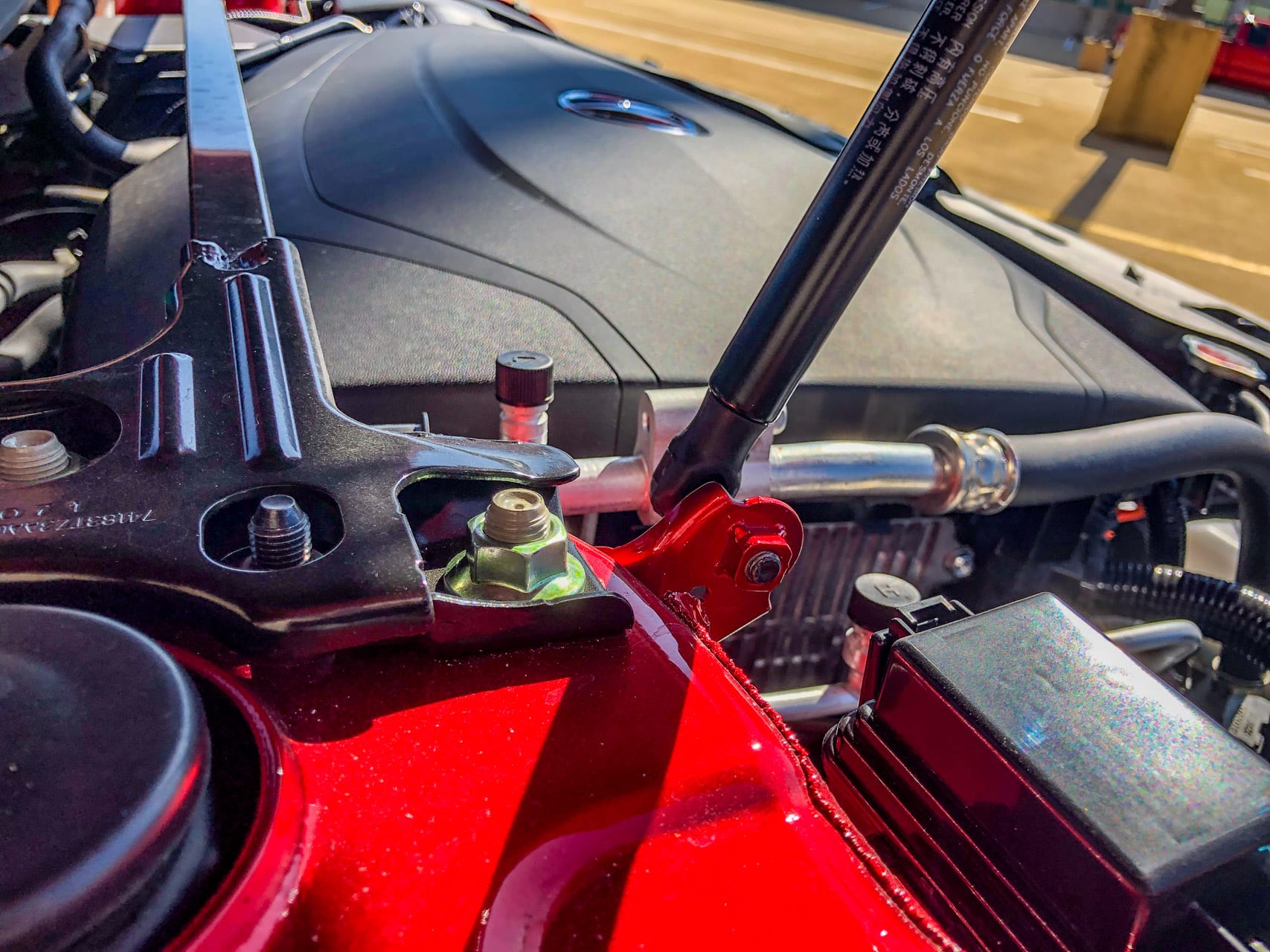 The larger 3.5L engine is rated at 290 horsepower and runs through a 9-speed transmission. You can choose from Eco, Normal, Sport, and Sport+ driving modes. One of my favorite bits about Sport+ is that rarely shifted for me in manual mode (and it automatically turned off stop/start). Some drive mode systems are super conservative and will decide that you’ve had too much fun and upshift for you. I could ride the PMC hard through the parking garage in 1st making some decent noises and not have the system intervene. Speaking of that, the exhaust note is admirably throaty and melodious for a luxury car.

It’s not amazingly quick, but at 5.something to sixty, it’s not slow either.

It’s always important to see how the car in question compares against the competition, at least on paper. I’ll start with the price. The usual sports sedan benchmark, the BMW 3-series, starts at $40,750. Meanwhile, the Mercedes-Benz C-Class sedan starts at $41,400 and the Lexus IS starts at $38,560. All but the Lexus come at a hefty premium over the TLX, even once you add the larger engine and SH-AWD.

Those all also come with their smallest offered engine, typically some sort of 2.0L turbo 4-cylinder with 250’ish horsepower (some more, some less). That means the TLX definitely has a nice edge from a power and price standpoint.

One to watch in this category if the new Genesis G70. For $35,450 you’ll get a 252 horsepower 2.0T with RWD, which is still down on the TLX, but it unsurprisingly comes with a competitive price. 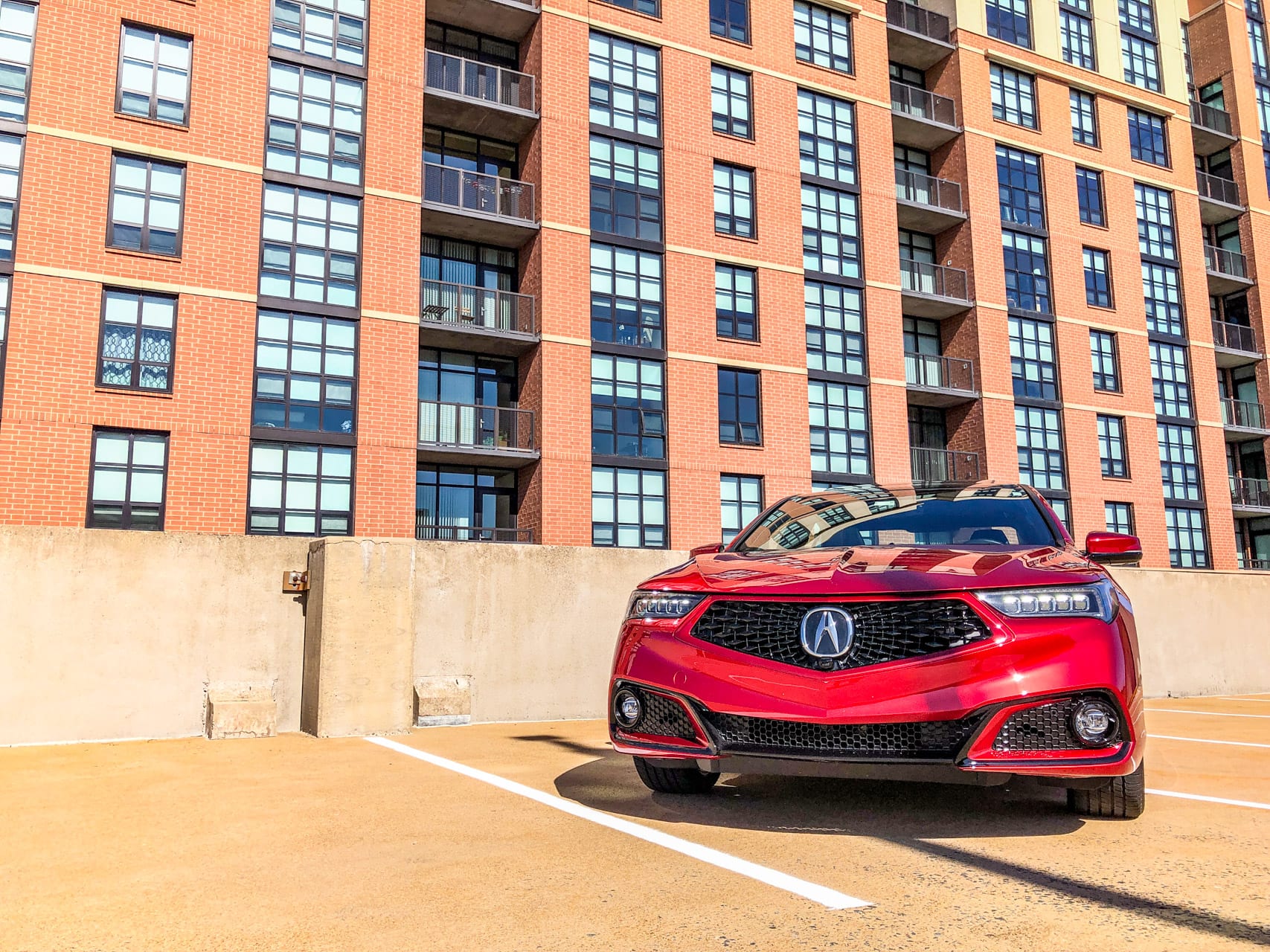 So, this PMC thing is pretty competitive compared to the other sporty sedans, plus not its massively expensive compared to maxed out TLX. So why wouldn’t you get this over any regular TLX? Well, you’ll have to find one first. With only 360 made I could only find (3) on CarGurus, (59) on Cars.com, and about (50) on AutoTrader. Compare that to the literal thousands of normal TLX models out there, and it’s clear that they are a bit rare. Luckily I didn’t see any overt price gouging by dealers, but your results may vary.

In the end, I loved this car. It passes that “look-back-at-it-and-smile” test in spades. Every time I saw the PMC, no matter the light, I was enthralled. I think that if you are interested in a nice, reliable, sports sedan, you can’t go wrong with a TLX in general. I still had that feeling lingering in the back of my mind that I wished that it had a Jackson Racing supercharger or some other form of a performance boost over the normal TLX. Clearly visions of 1990s Acura’s still dancing through my head. Still, it’s a heck of a car and if you think that being able to look down at a numbered plaque and feel a bit more special is worth it, and you can find a TLX PMC, it’s worth a look. 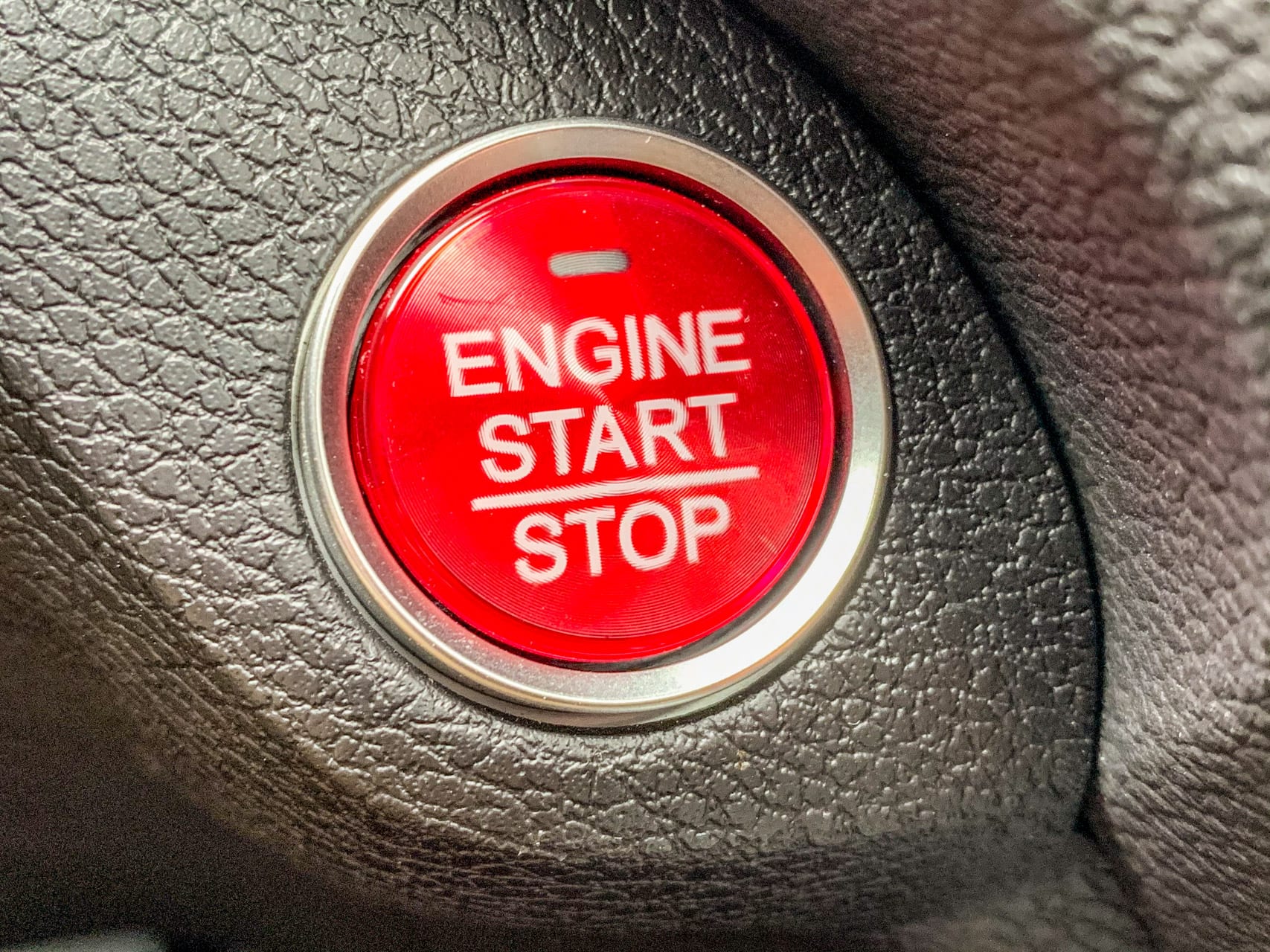 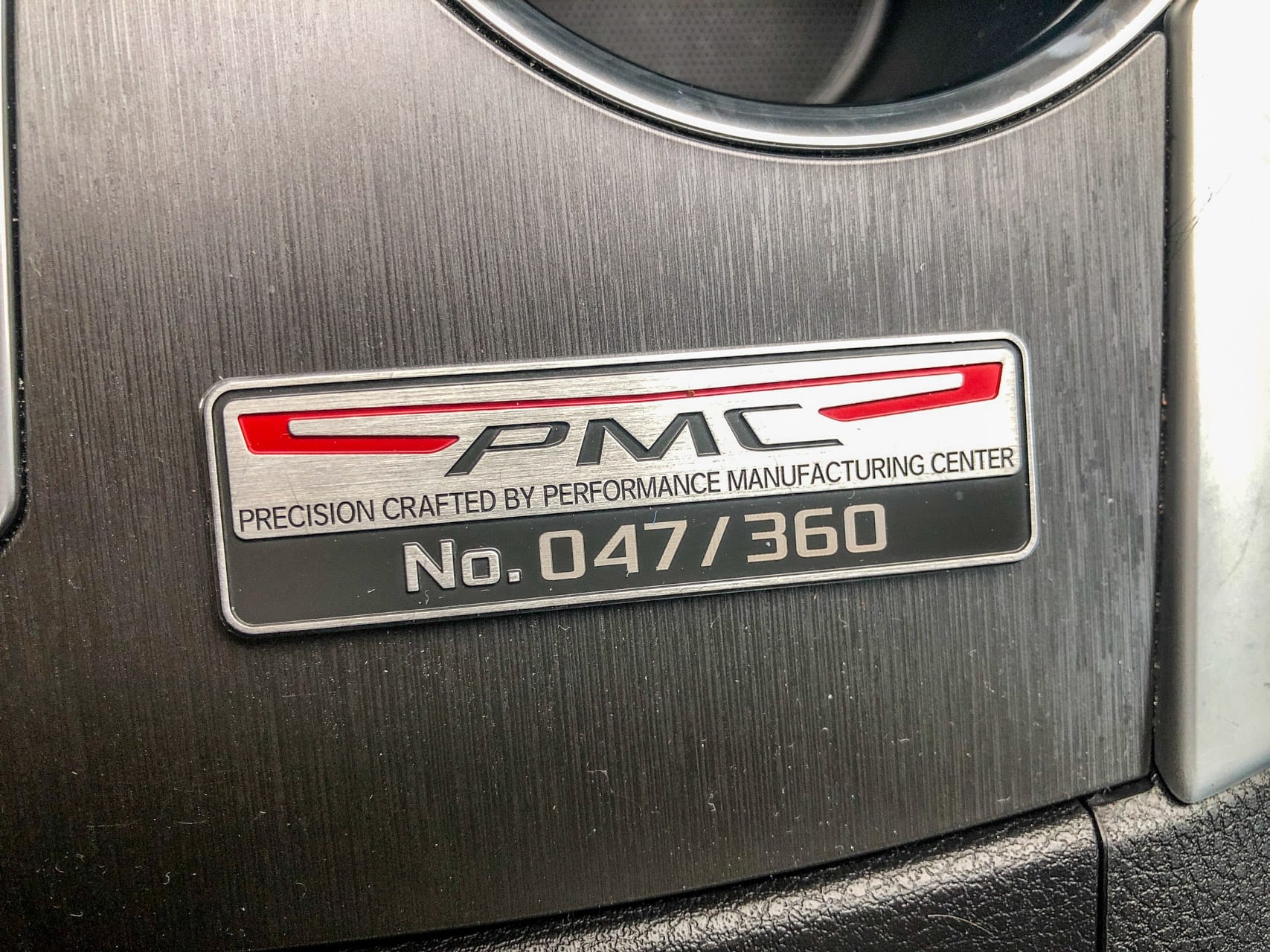 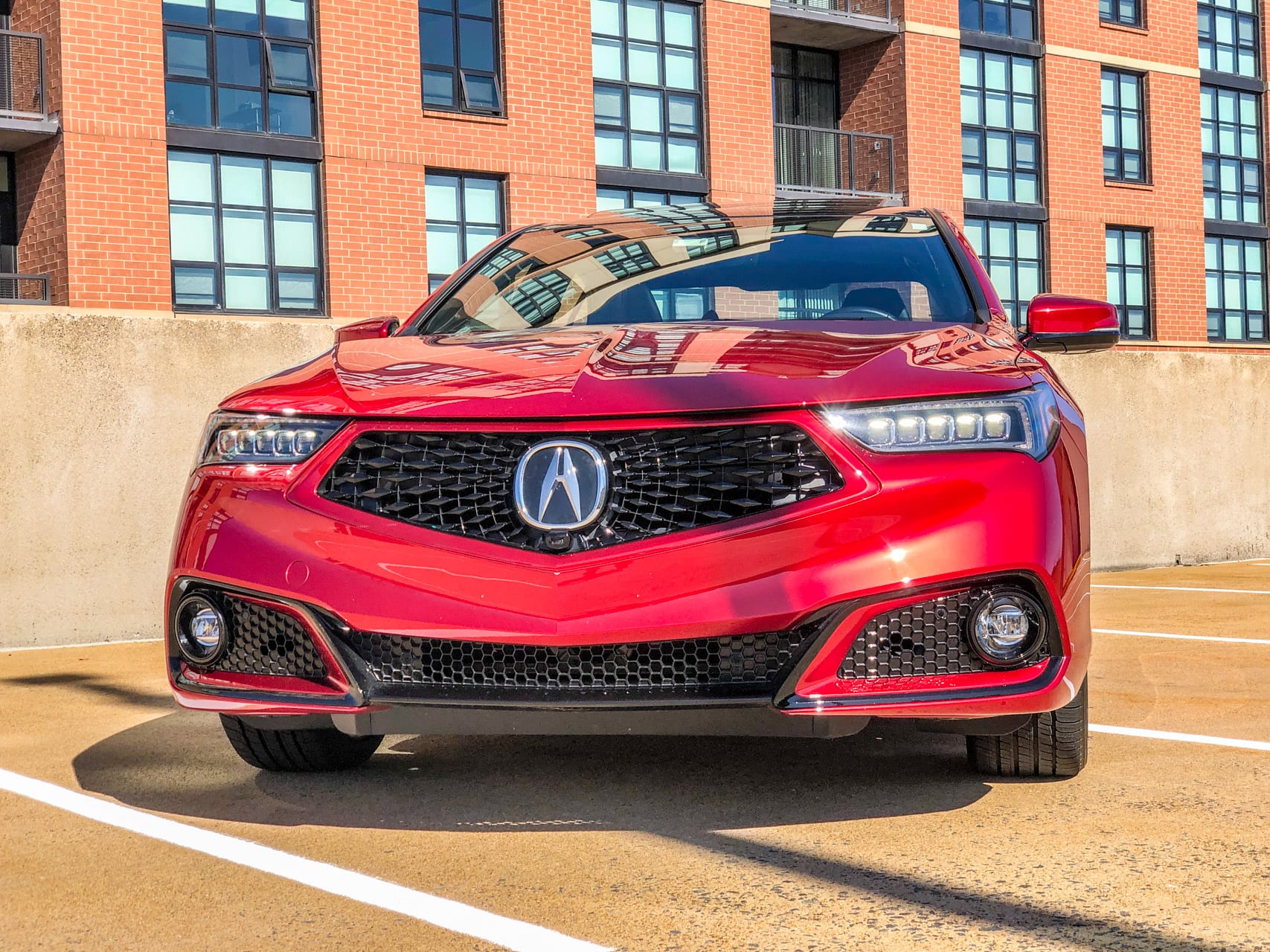 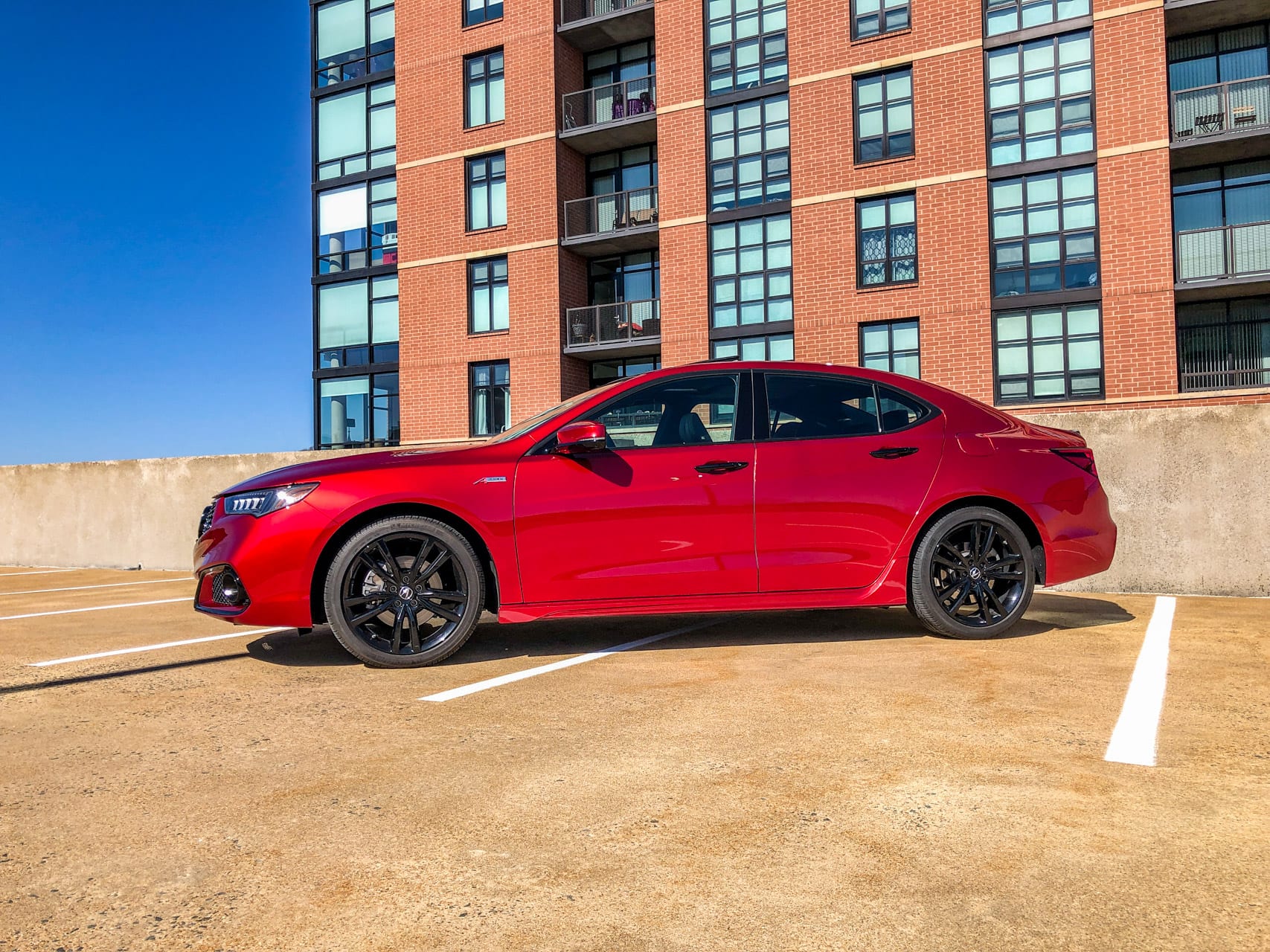 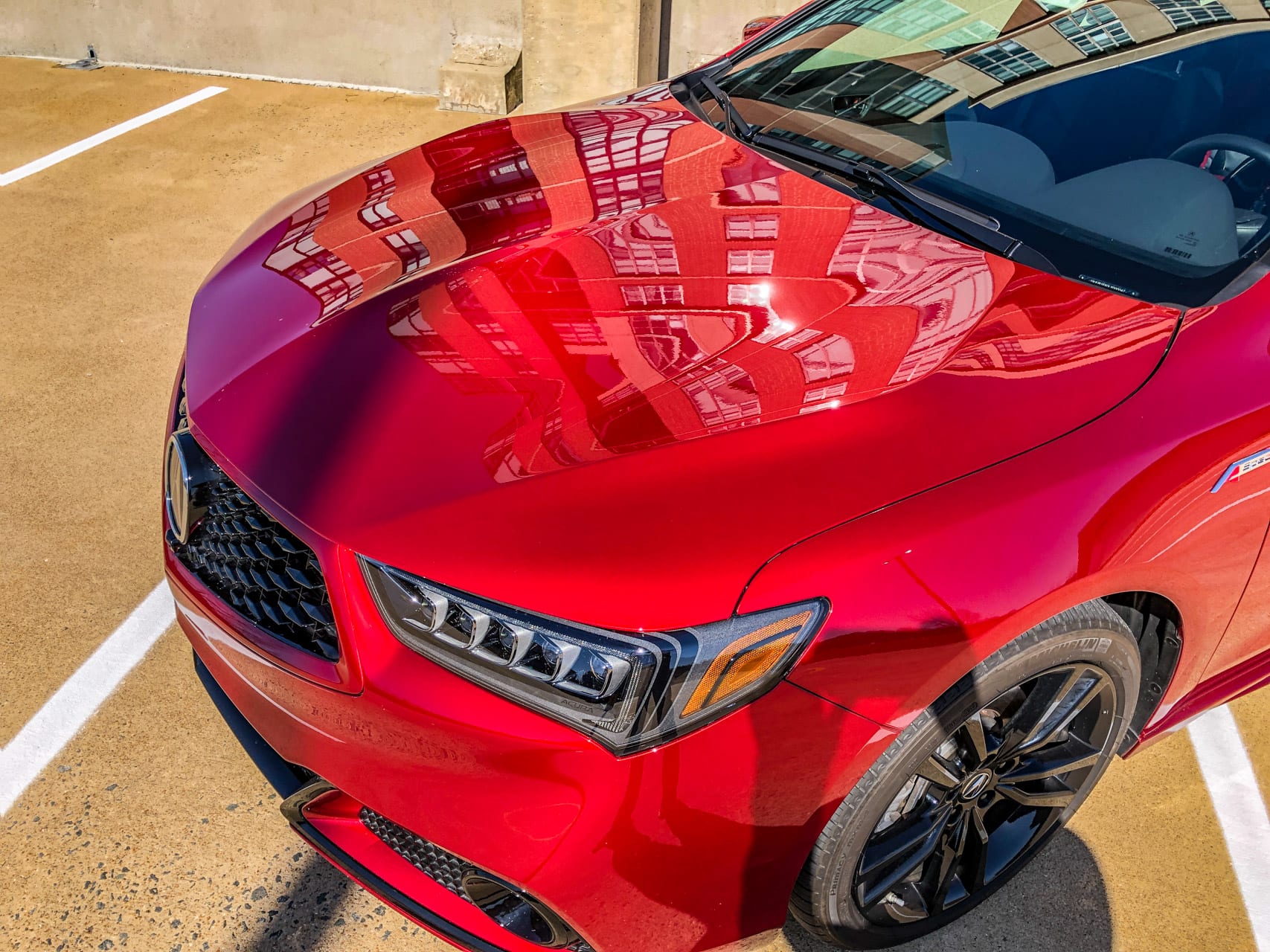 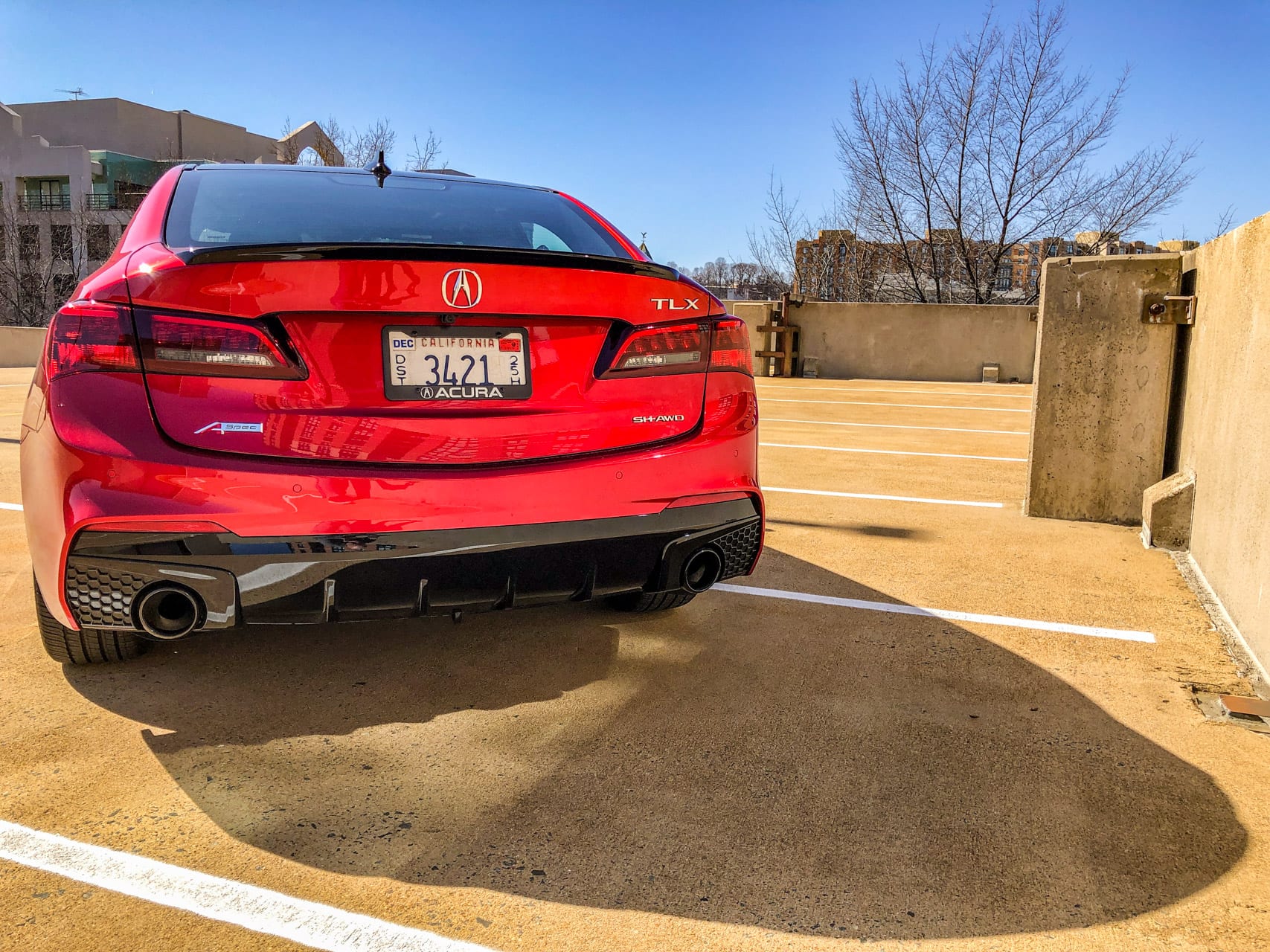 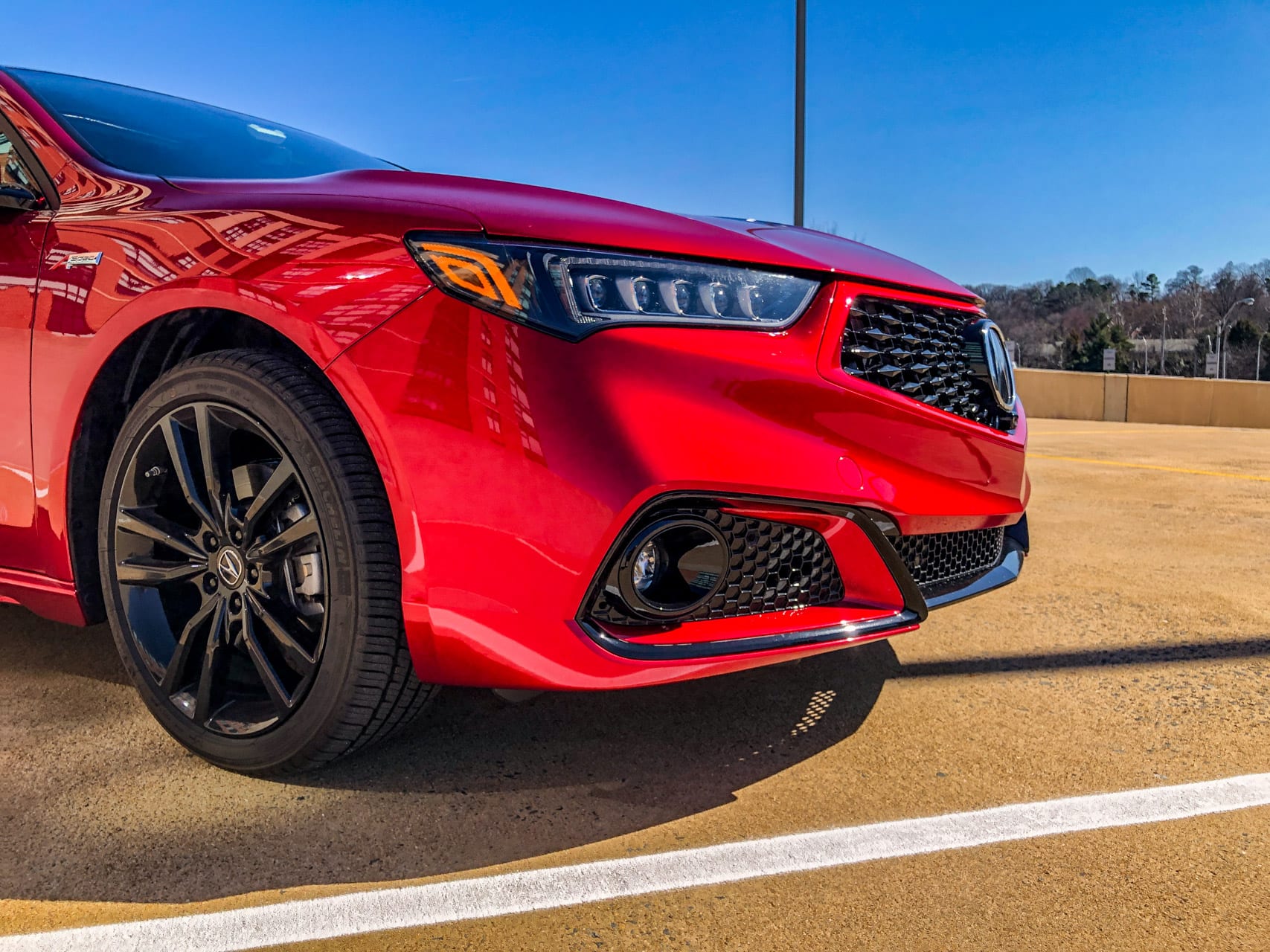 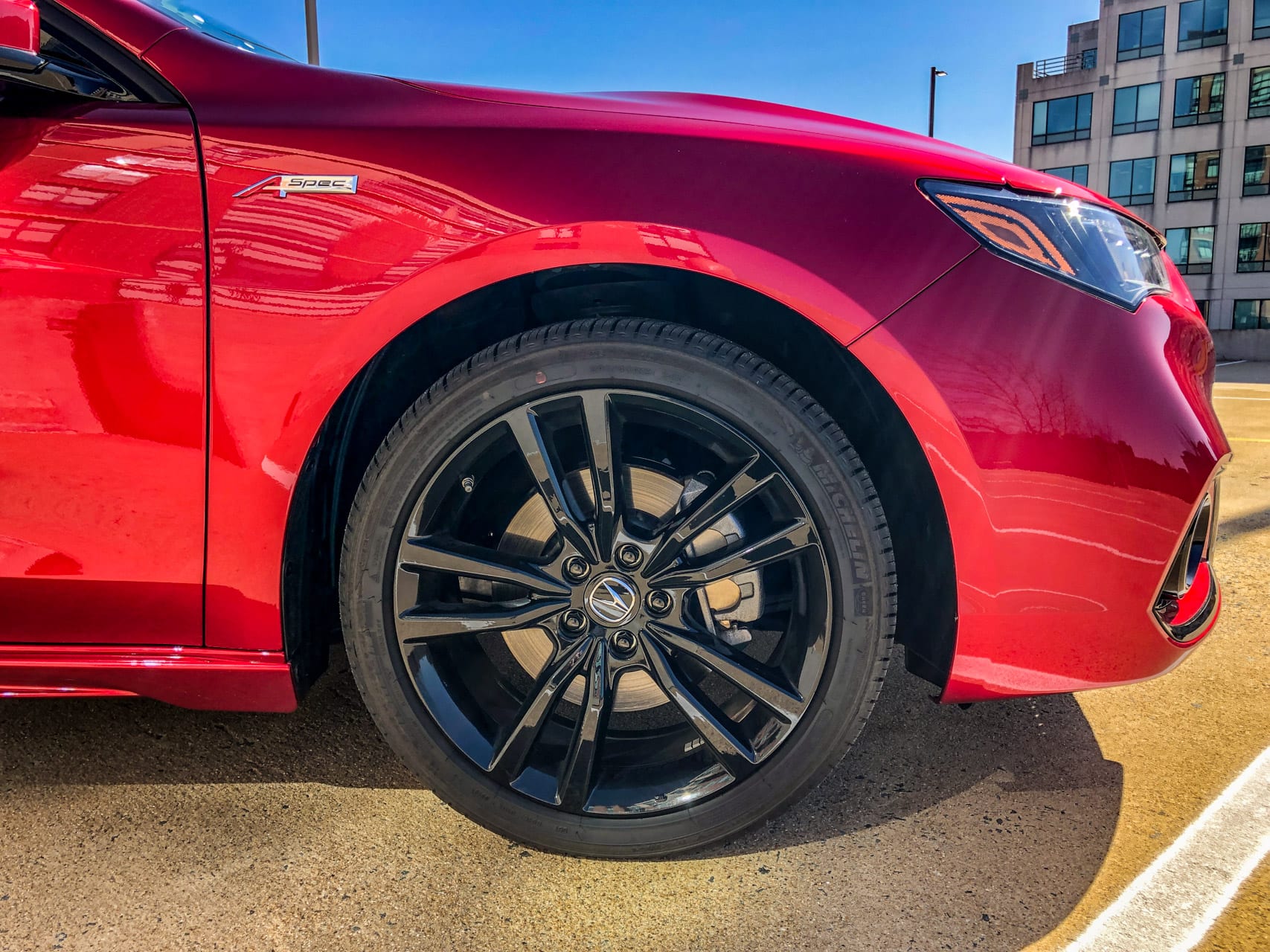 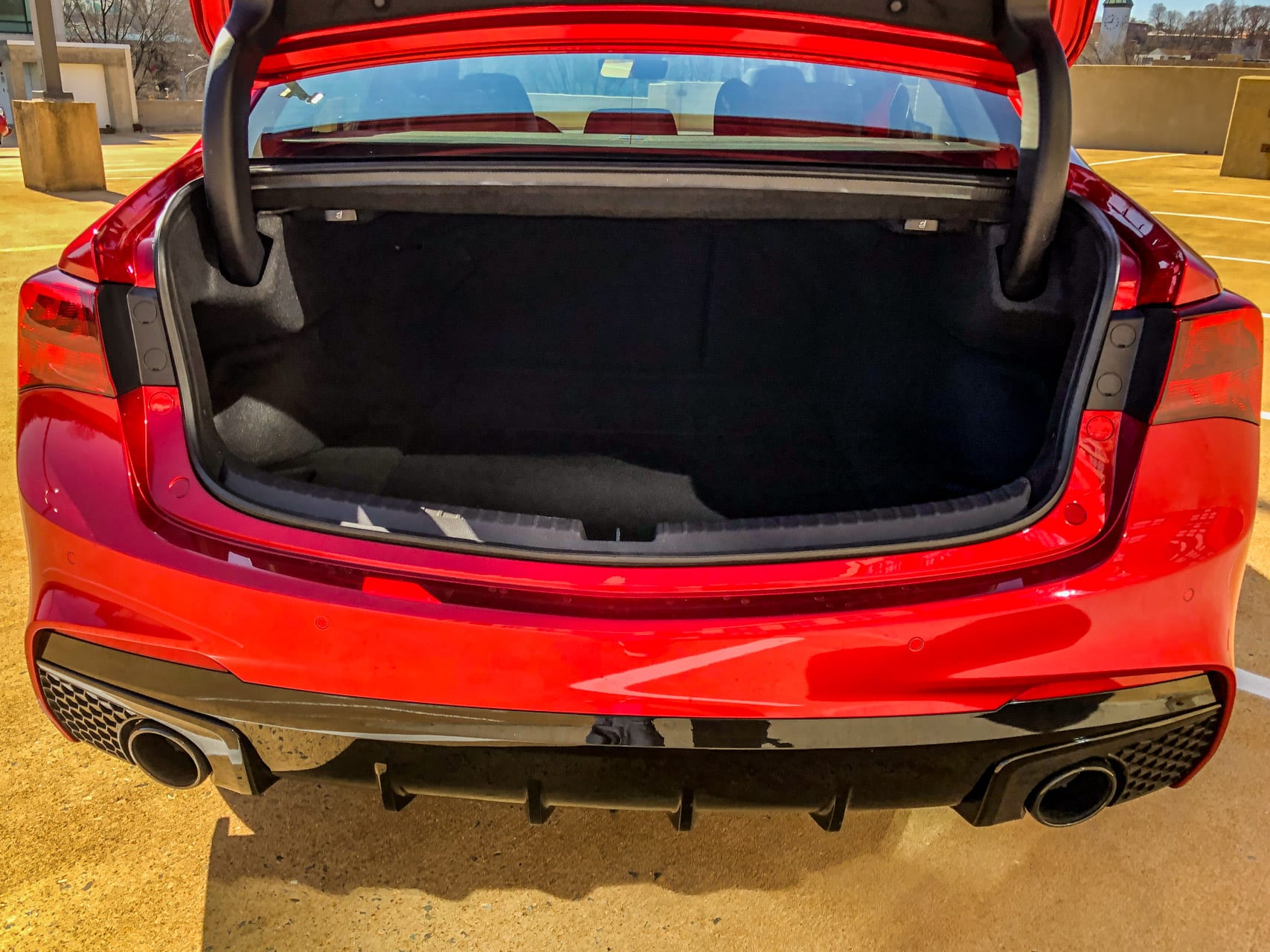 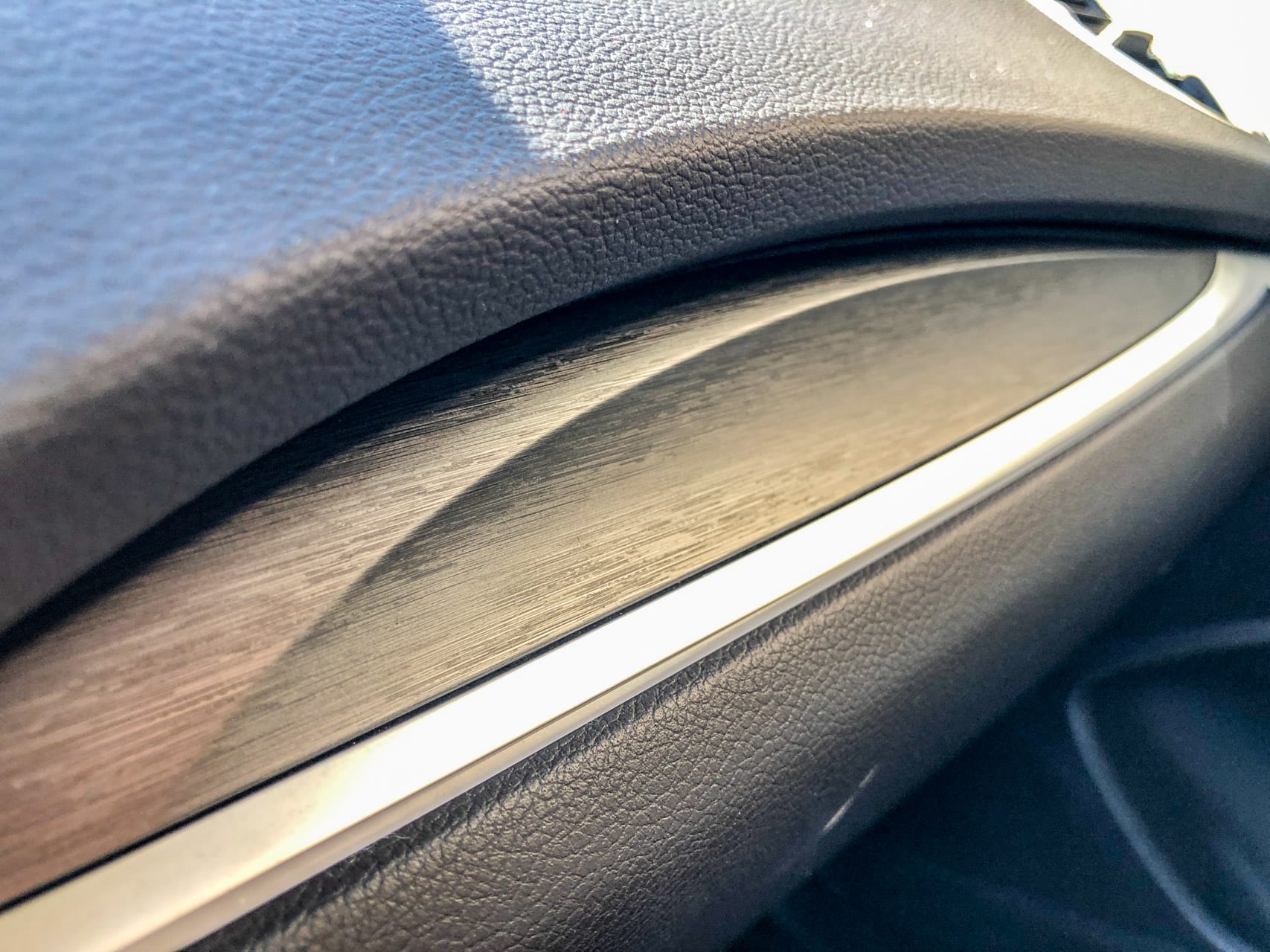 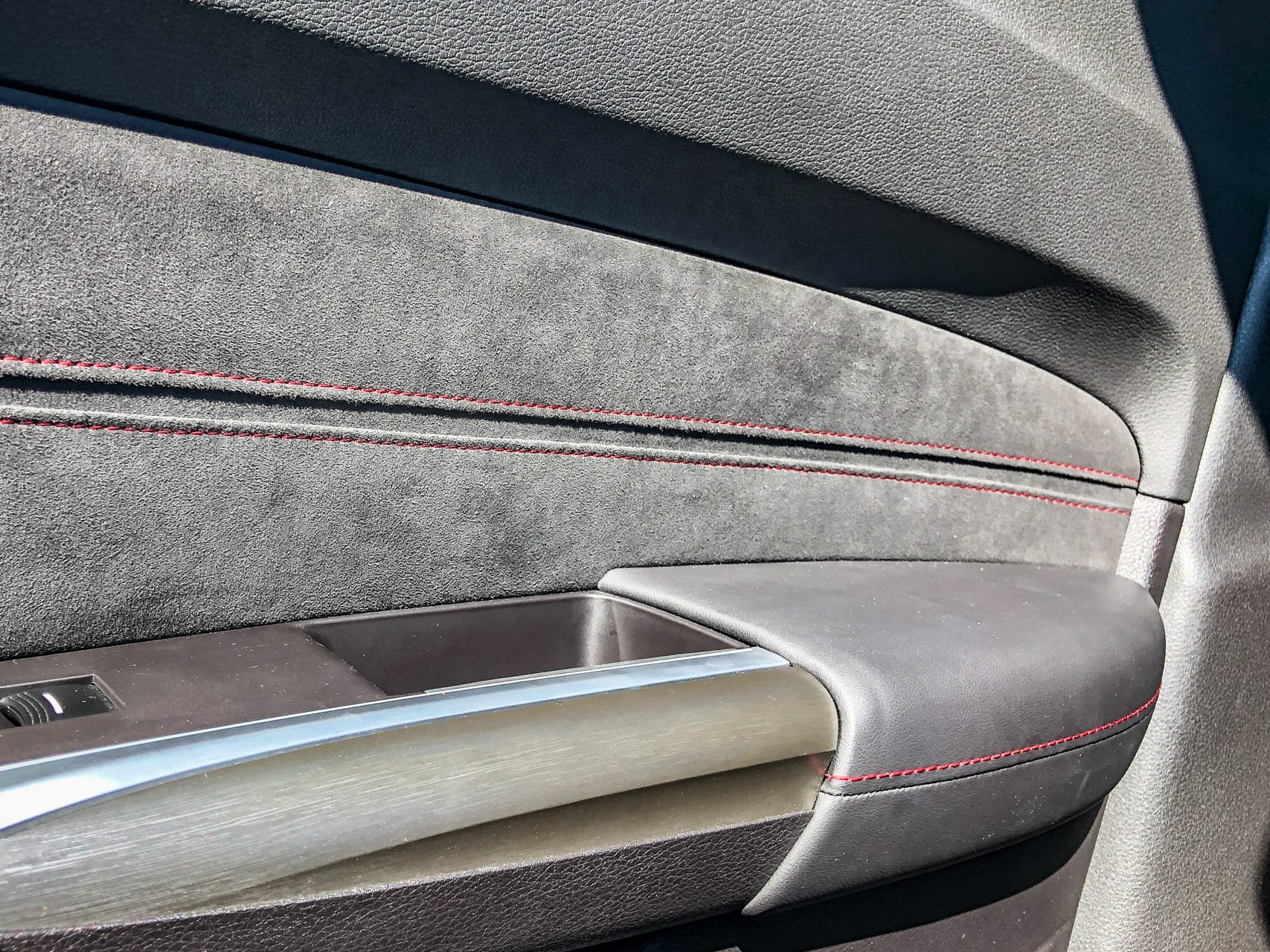 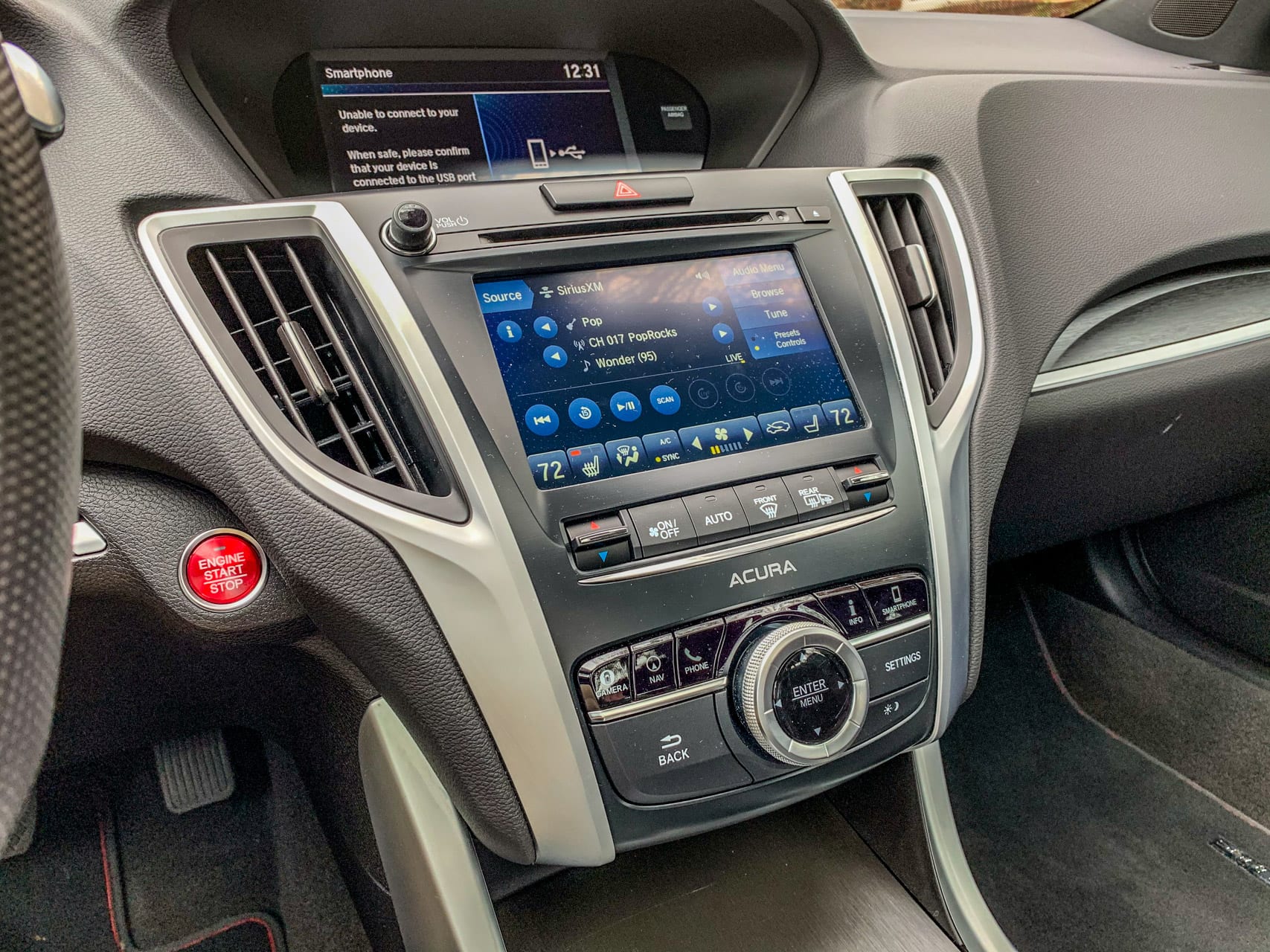 [Disclaimer: Acura provided this TLX PMC for the purpose of this review. All images copyright William Byrd/Hooniverse 2020]